Brunch Your Way Through Easton – Part 2 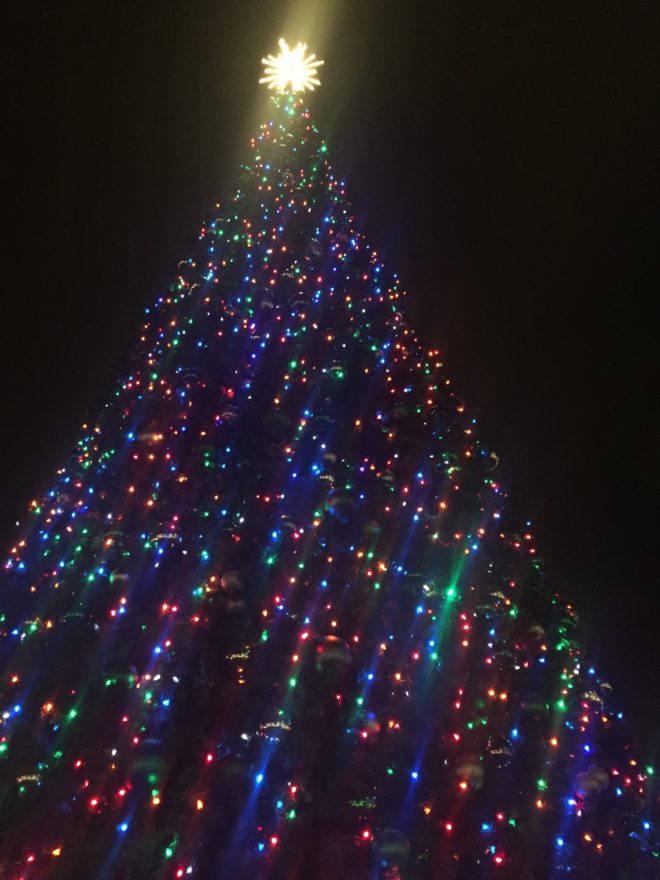 Last week I explored some of the breakfast and brunch spots around Easton Town Center, starting with turkey and sweet potato hash Northstar Cafe, cider and fluffernutter toast at Zest Juice Co., and brunch burgers at Flip Side. Now this week I’m back discovering new places, guided again by Toni, the Easton FoodE. 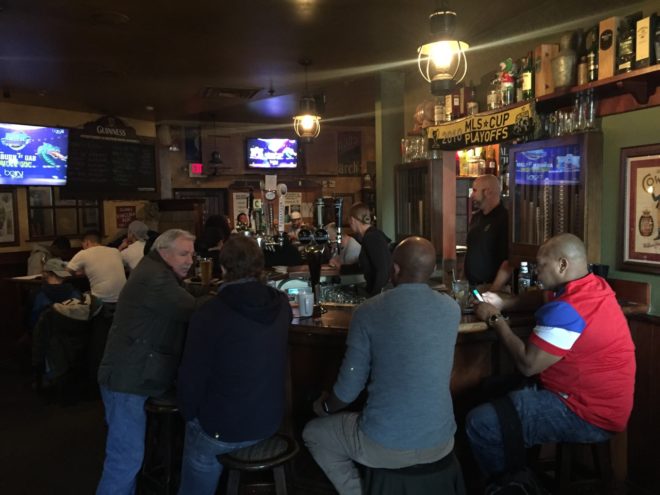 The family and I started with a hearty brunch at Fado Irish Pub. When we arrived at 10 a.m. that Saturday, we found the pub already full. Fado is known for featuring soccer matches from all over the world, which means they open early to accommodate viewers. That morning they had opened around 7 a.m., and while we were there Barcelona and Real Madrid faced off. 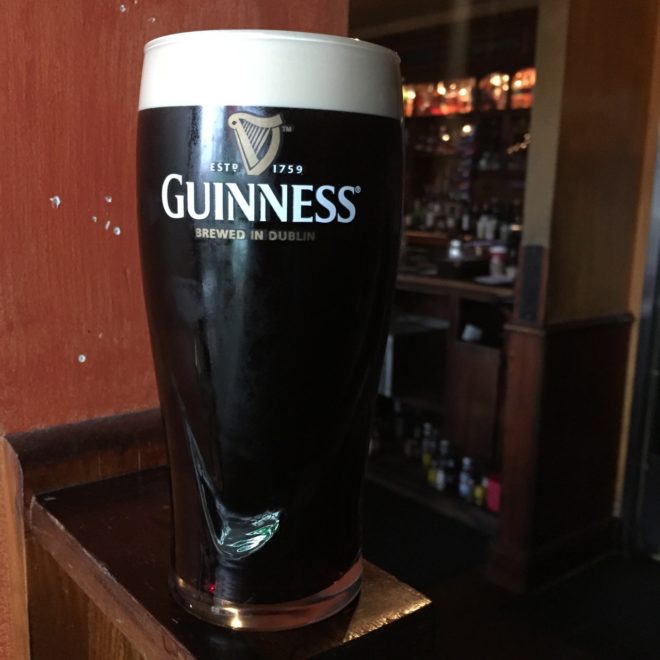 An Irish brunch calls for an Irish beer, right? It seemed apropos to sip a Guinness while we ate. 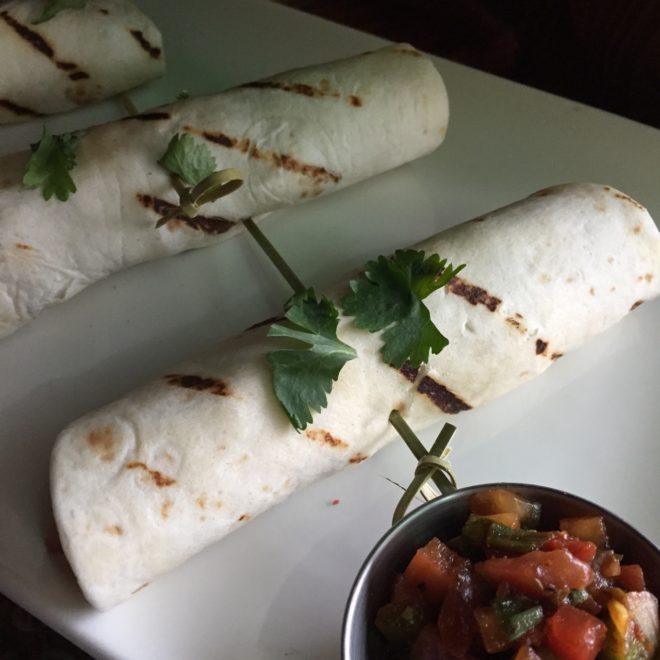 Fado’s brunch menu mixes Irish staples with American classics and a couple Mexican touches. For instance, the bacon taquitos: they’re rolled and grilled mini tortillas filled with scrambled eggs, cheese, and bacon. They’re simple and compact little bites – great for splitting as an appetizer – and they come with a smoky chipotle salsa. 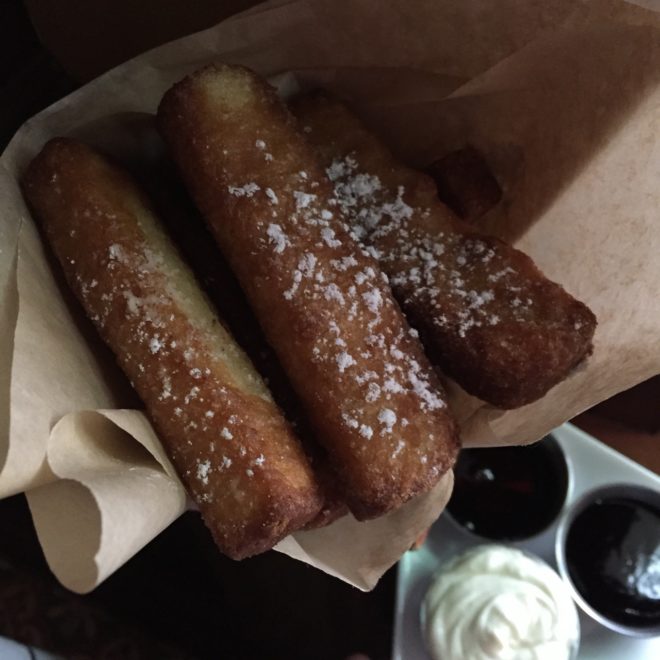 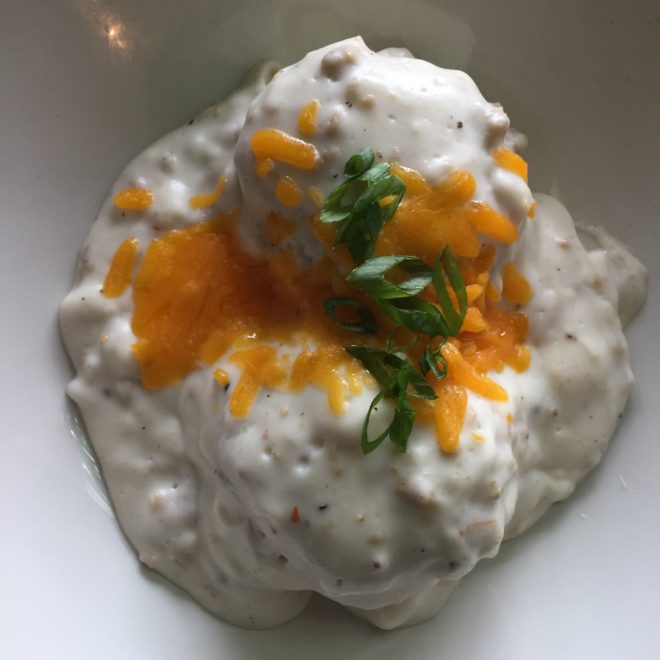 Both boys honed in on the biscuits and gravy, a small but hearty bowl of two soft biscuits covered in a chunky gravy. 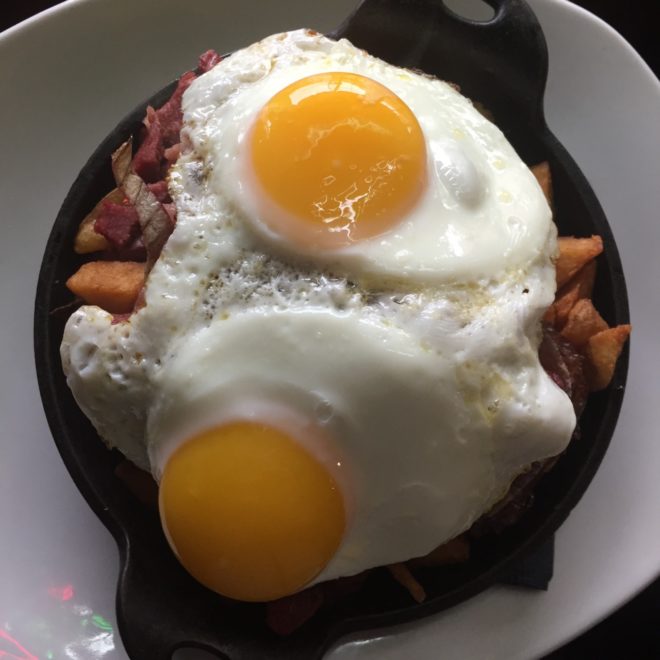 The Irish classics and Irish-themed dishes on the brunch menu are highly recommended, like the hangover sandwich filled with Irish sausage and rashers (back bacon, or bacon made from the pork loin + pork belly), the braised lamb hash with mushrooms, or even the breakfast boxty quesadilla, a boxty (an Irish potato pancake) filled with sausage, rashers, eggs, cheese, and pico de gallo. And of course, there’s the corned beef hash. 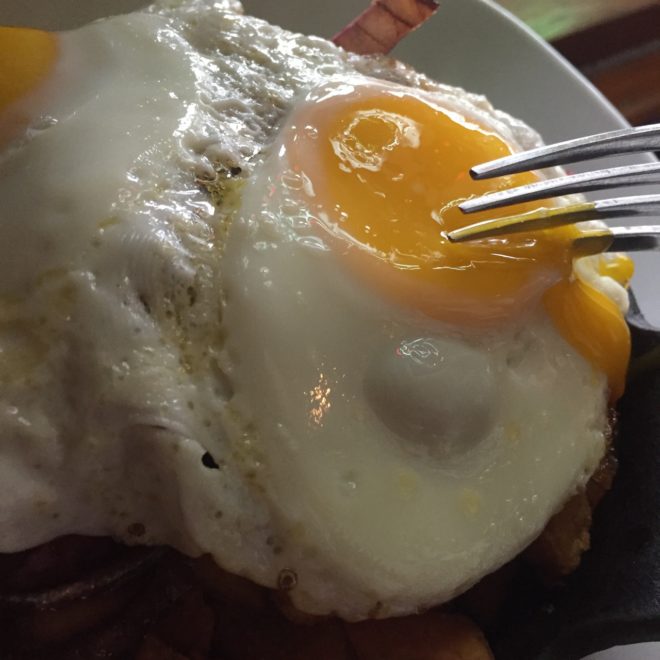 Late last year I actually interviewed Chef Jason from Fado about their corned beef hash for Crave magazine. Jason crafts a very tender version of the corned beef; the meat just fell apart. It’s served with crisp potatoes and red onions, then topped with a couple fried eggs. The egg whites were well done, but that yolk was nice and soft, so you could break it and mix it with the meat and potatoes. 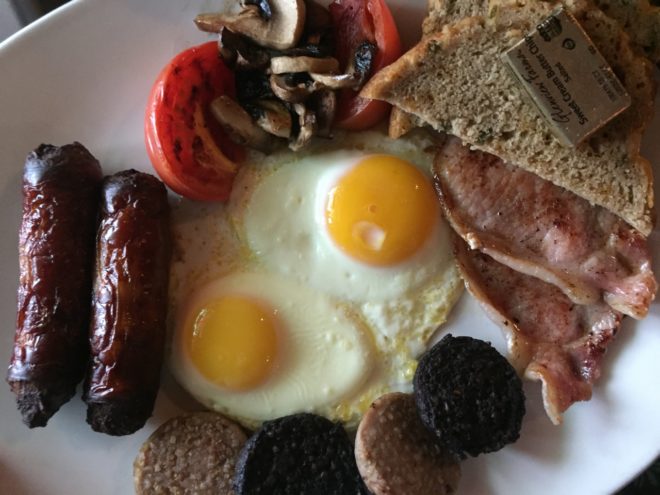 The real highlight for me, though, was the all-day Irish breakfast. It’s a high-calorie (read: delicious) platter of two fried eggs, Irish sausages, mushrooms, tomatoes, black and white puddings (a type of blood sausage mixed with spices and oatmeal – think Cincinnati goetta), rashers, and slices of Guinness cheddar chive bread. It’s rich, comforting, and filling. There aren’t many places to get a real Irish or English-style breakfast like this in Columbus. I love the Irish sausage in particular; it’s a softer and more consistent texture than typical American sausages, with a crispy casing. I could go back and order a whole plate of those. 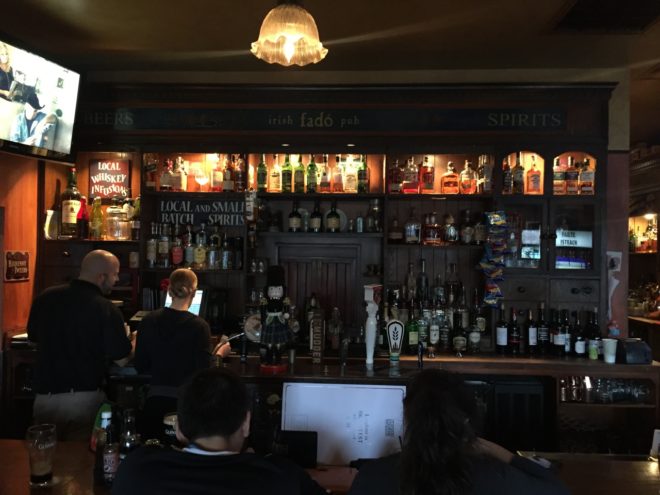 Sitting in our booth at Fado reminded Mrs. Breakfast w/Nick and I of our time in the U.K. We had several memorable meals at pubs there, and Fado brought back memories of those trips. The space is appropriately dark and cozy, with loads of good food, drink, and camaraderie to be had. 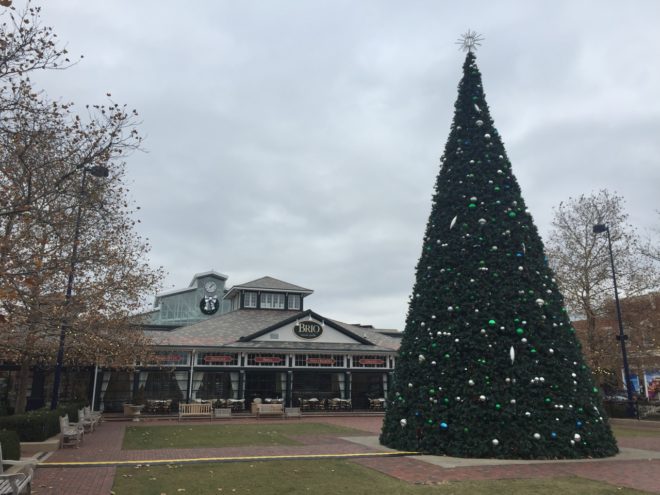 A second day of exploring with the Easton FoodE had me hitting up two spots: Brio Tuscan Grille and Bon Vie. 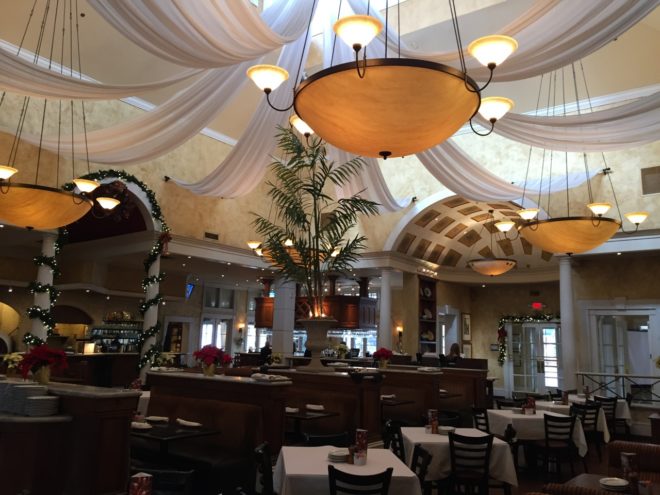 It’s been years since I’ve visited Brio, and I’ve forgotten its size. The entire restaurant is open, from the dining room to the bar to both kitchens. 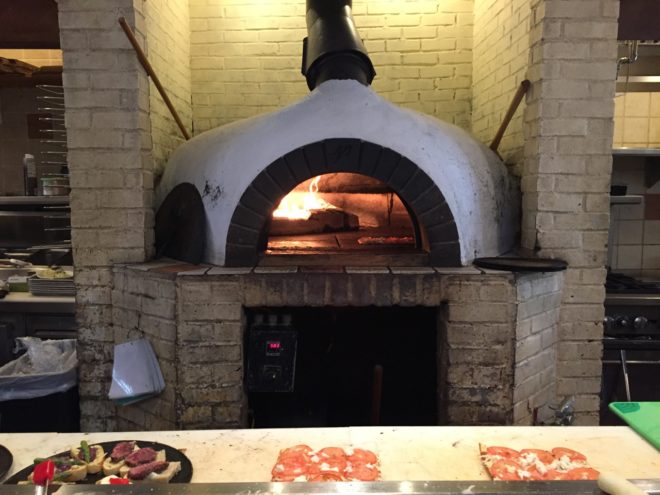 To one side is the kitchen with a brick pizza oven in the center. 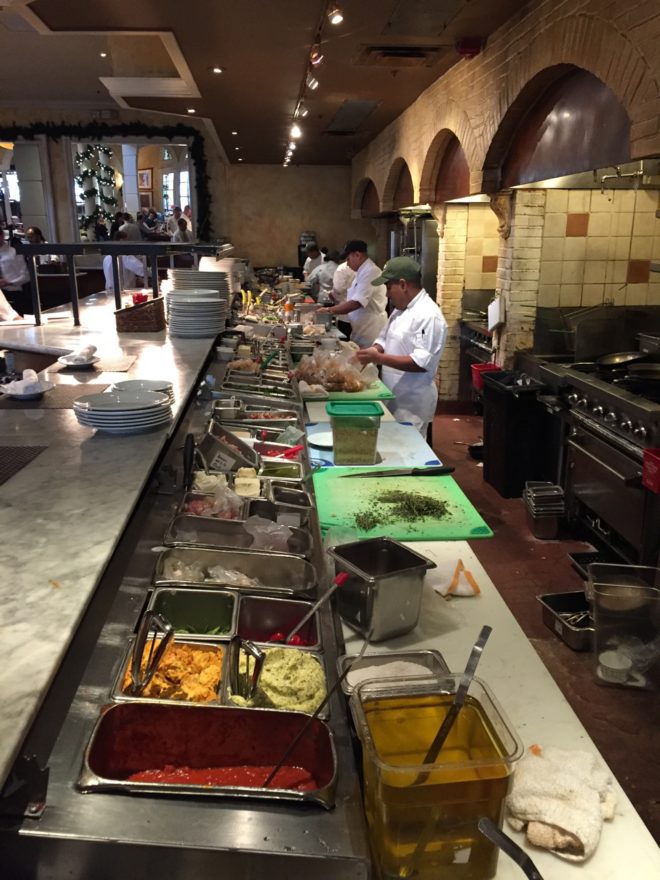 And on the other side is the main kitchen, where you can watch the team at work. 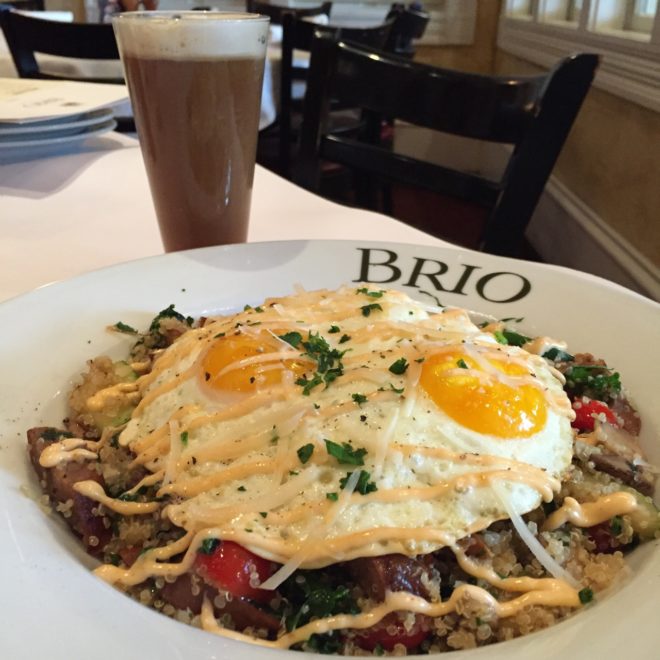 We sampled the Tuscan brunch bowl from their weekend brunch menu. The brunch bowl is a colorful concoction of quinoa, Italian sausage, crimini mushrooms, tomatoes, kale, zucchini, and parmesan topped with two fried eggs and a Sriracha mayo drizzle. The sausage and the Sriracha mayo provide a little kick to the rich and earthy dish. We also sipped a sweet and boozy Caffe Disaronno, made with hot coffee, Disaronno (an amaretto liqueur), Grand Marnier, dark Creme de Cacao, and whipped cream. 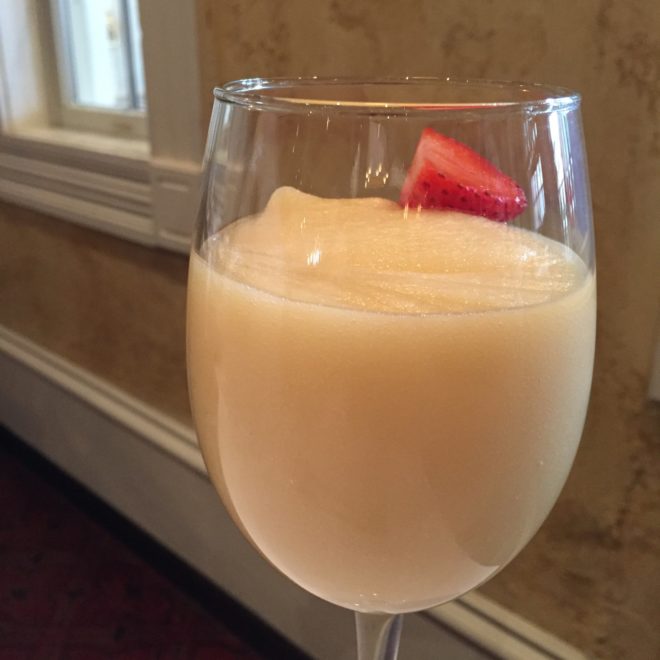 In addition we tasted a frozen peach bellini. This would be nice with brunch out on the patio during the summer. 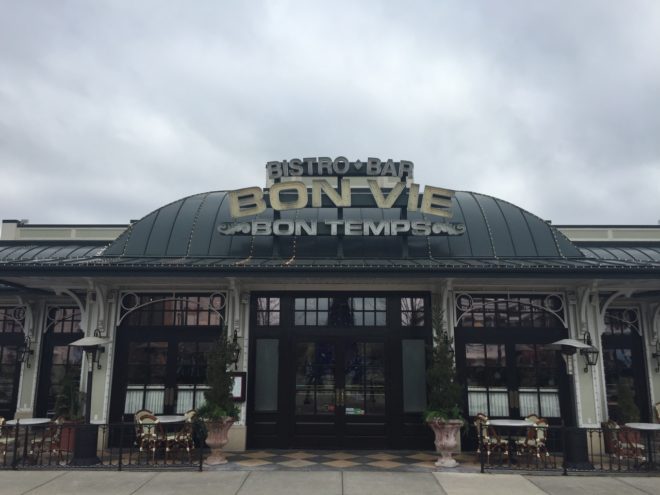 Across Easton we found Bon Vie, located in front of the big fountain with a Christmas tree in the middle of it. 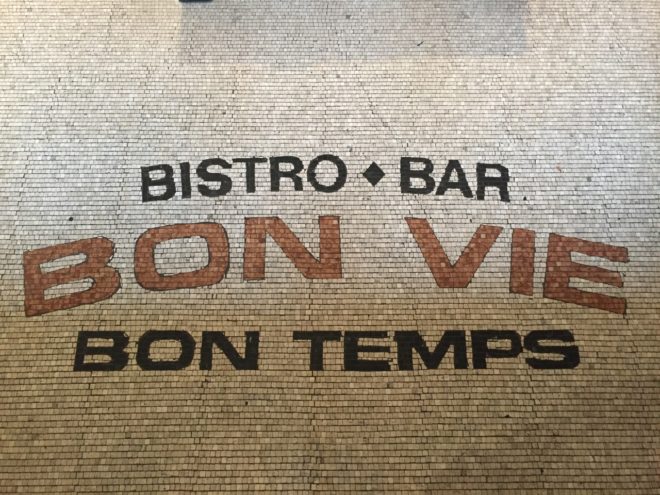 Like Brio, Bon Vie’s building is spacious and open, although it features the quieter vibe of a French bistro. The open kitchen sits at the back, while the bar is to one side. 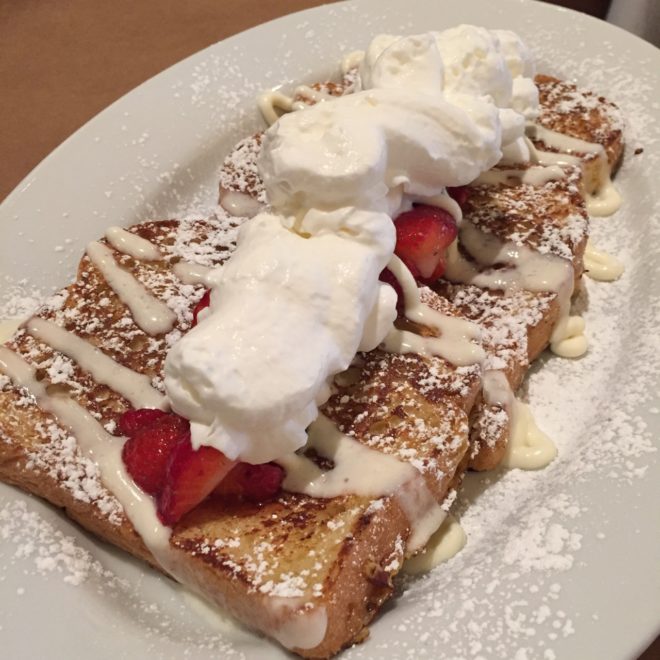 We sampled both sweet and savory items at Bon Vie, started with their sweet berries and cream French toast. It uses brioche (which, honestly, should be used in all French toast) topped with strawberries, whipped cream, and a sweet cream cheese. 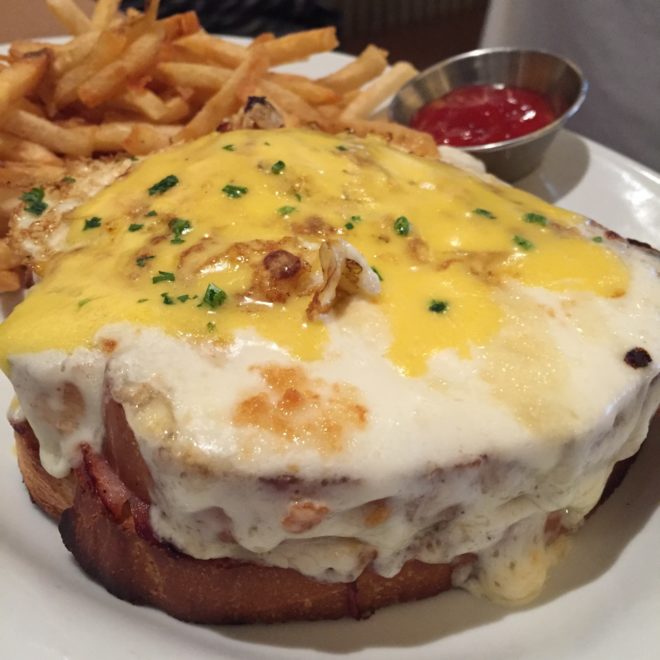 The croque madame is pretty rich, layering ham and gruyere between bread, then topping it with a mornay sauce, a fried egg, and hollandaise. 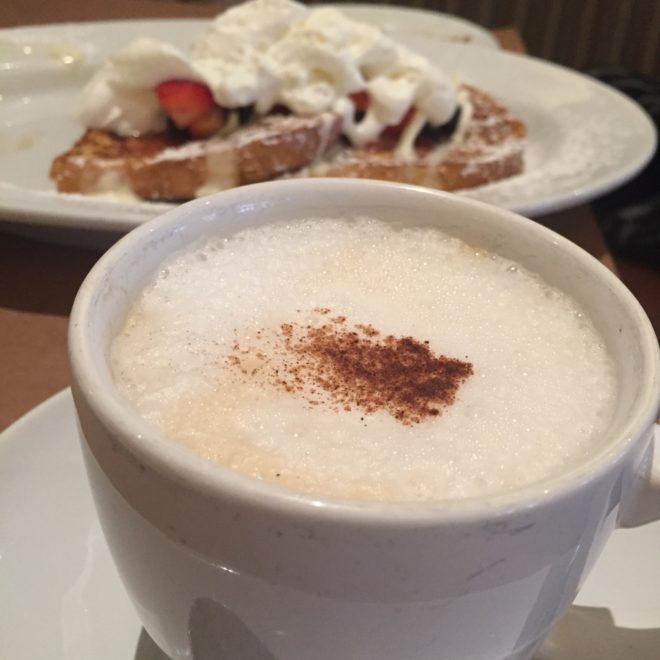 Bon Vie also offers espresso drinks; we sampled a shot of espresso and a foamy cappuccino with our French toast and croque madame.

So there you have it! Plenty of options for breakfast and brunch at Easton, whether you’re going light or digging in to something hearty. Any of these spots for an ideal start to a day of exploring the area.

If you haven’t already, read part one here!

Disclaimer: this visit was hosted and provided for by Easton Town Center. Opinions and photos are my own.