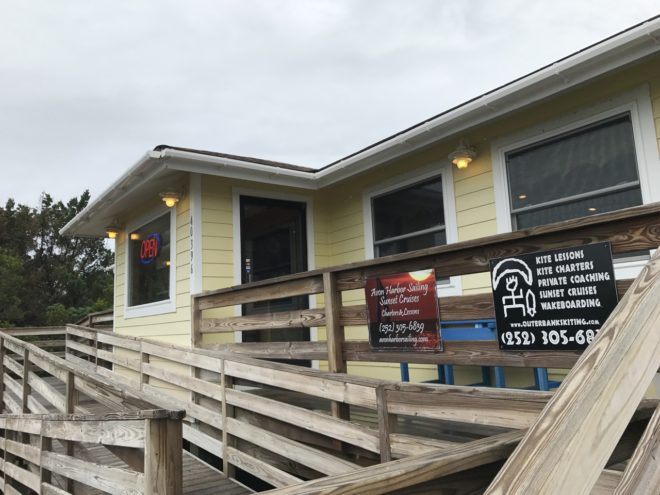 As regular visitors to the Outer Banks of North Carolina, we’re always on the lookout for new breakfasts. There are a handful of solid places, but given the transient nature of the island it’s always notable when something new pops up. One night we went to dinner at Ketch 55 in Avon, and on the way out we spotted these paper menus: 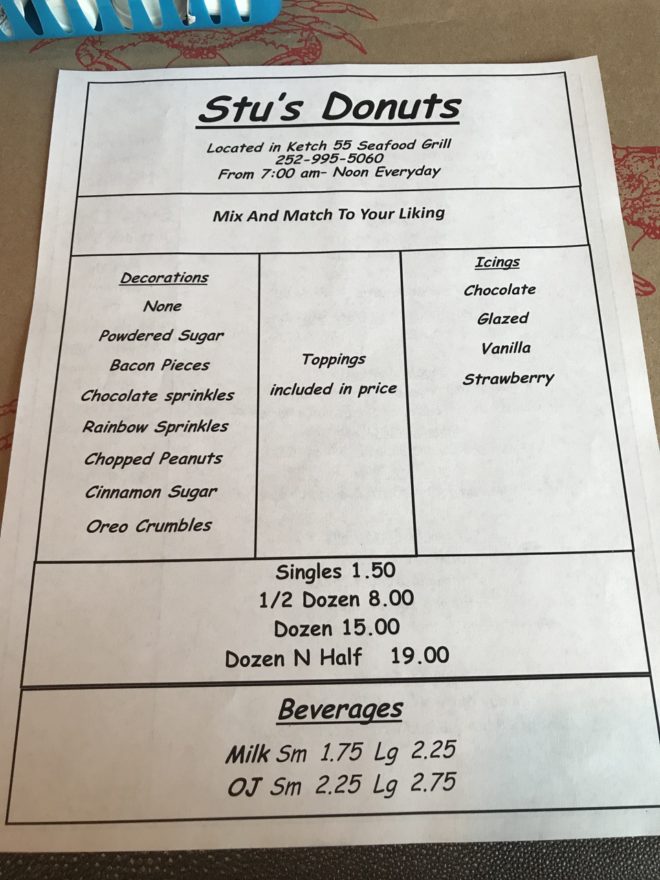 Donuts?! Count us intrigued. So dutifully, we rolled back up to Ketch 55 the next morning to find the place lively and humming. 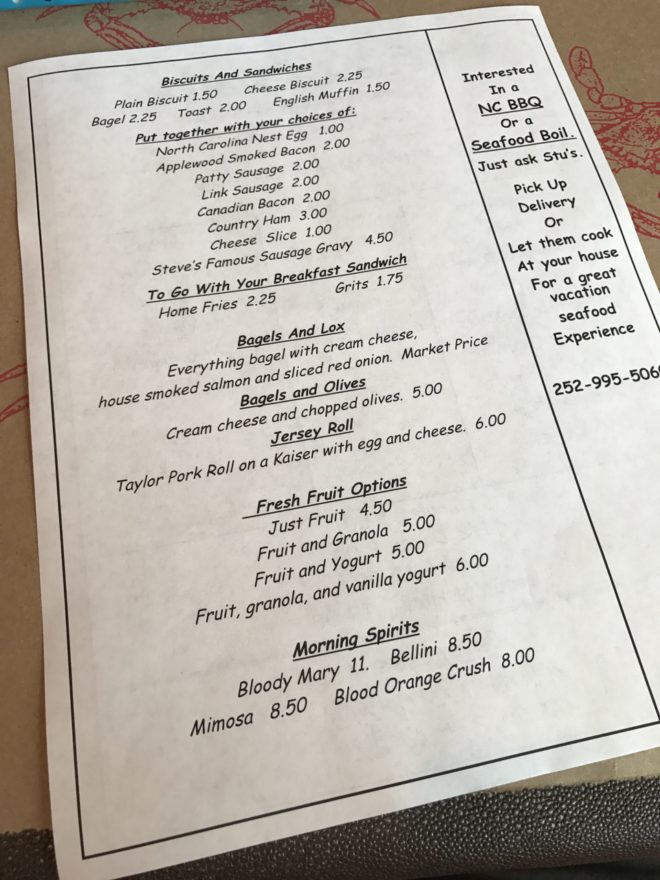 And to discover that the menu wasn’t just donuts. Breakfast sandwiches, sides, and even some adult beverages were on order. 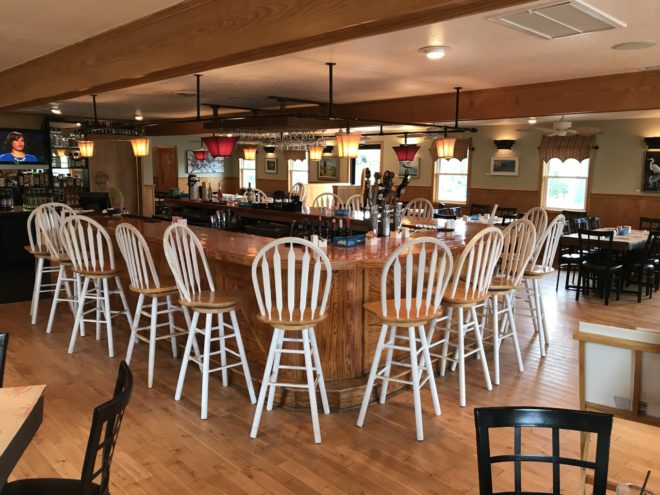 Ketch 55 runs mainly as a dinner spot with lots of seafood, but they open every morning to serve donuts and breakfast. 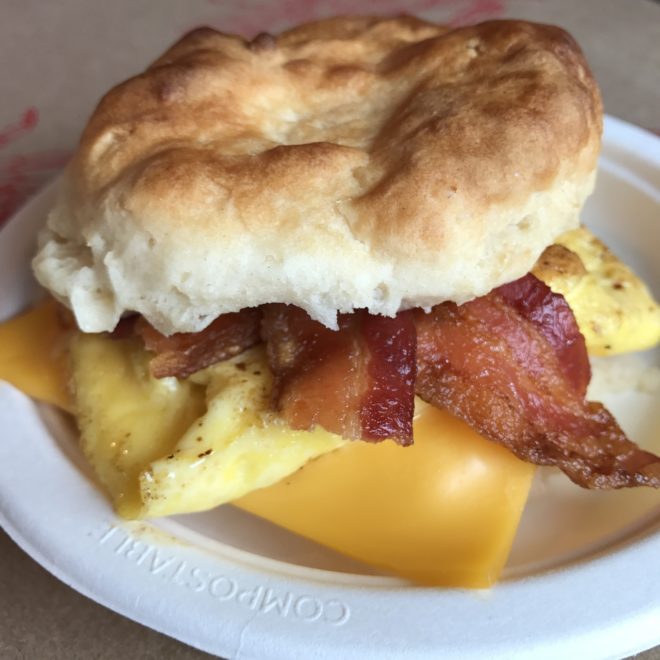 We had planned to order a sampling of donuts to take home, but decided to camp out a bit longer to have a full breakfast. There’s nothing terribly complex on the menu, but it’s filling. I built a breakfast sandwich out of a cheese biscuit, bacon, cheese, and something called a “North Carolina nest egg,” which turned out to be a layer of soft scrambled egg. 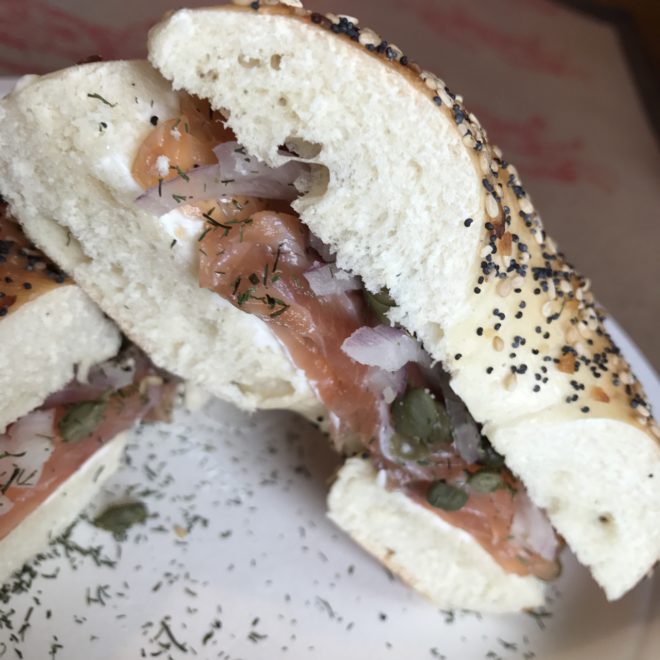 The bagels and lox features the expected everything bagel, smoked salmon, cream cheese, onion, and capers. It came together well, although we had thought the bagel would be toasted. Adds a nicer crunch to it. 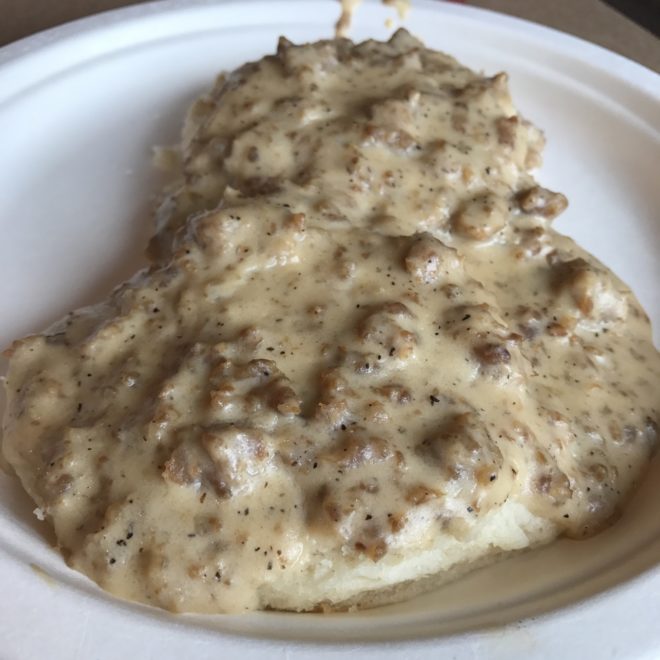 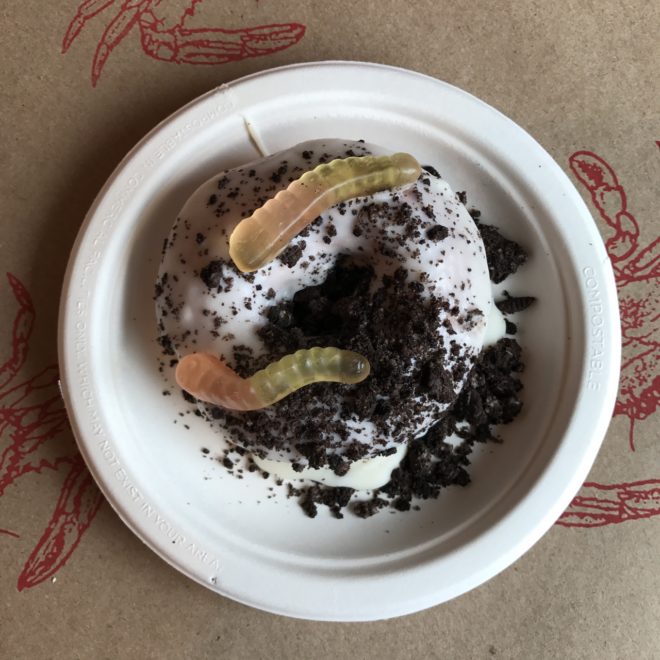 And Owen ordered one of the special donuts of the day, glazed with vanilla, crumbled Oreos, and gummy worms. 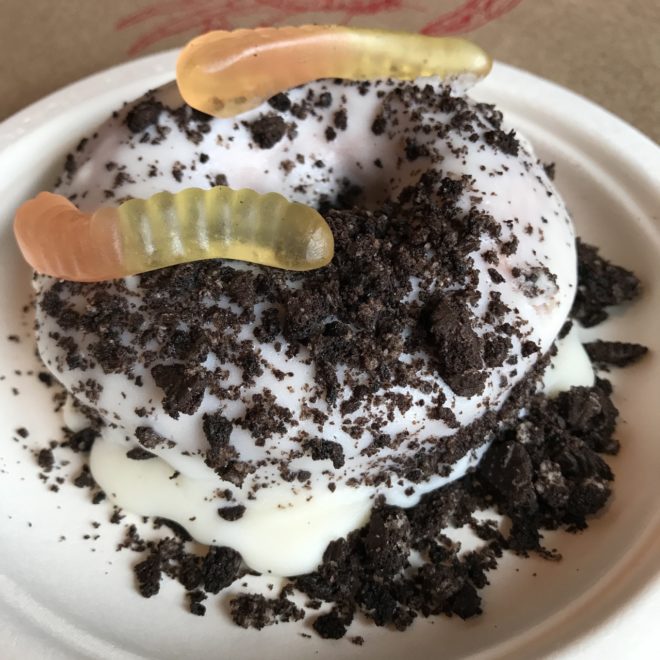 It was a hit with the kiddo. 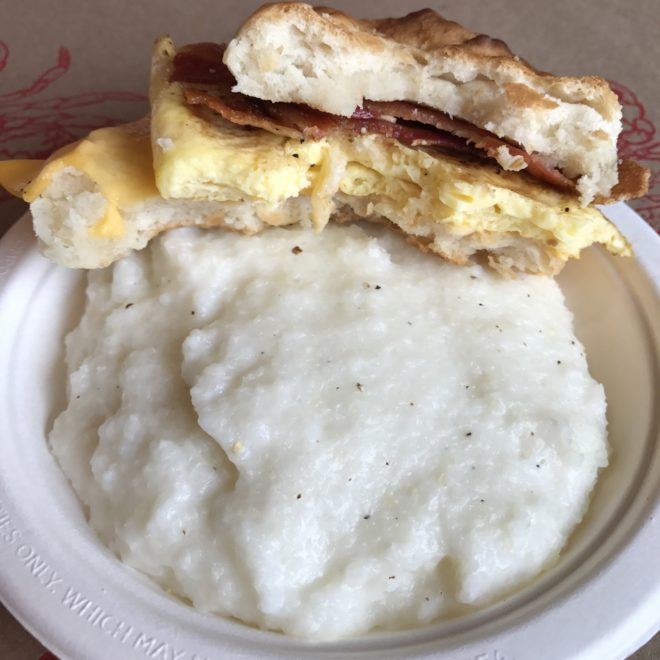 I ordered a side of grits to go with my breakfast sandwich. 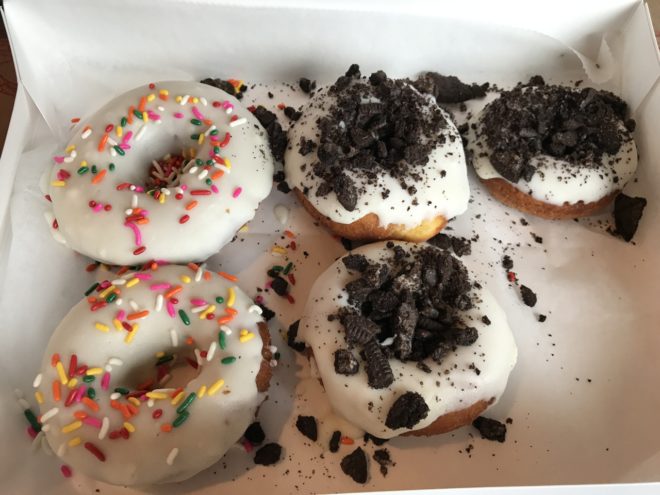 Stu’s fries up one type of cake donut and then lets you mix and match the toppings and icings. They feature a couple specialty donuts every day. We ordered some to go, and they waited to fry the donuts until we were done with our breakfast and ready to head out. 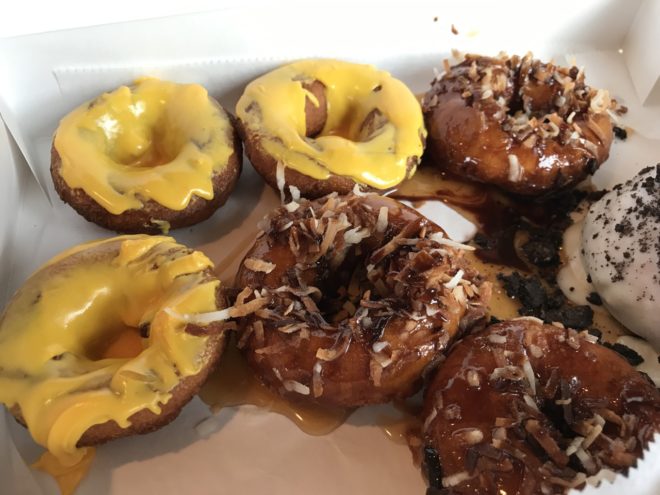 Some of the donuts were still pretty hot when they arrived, which meant the icing melted and ran off. 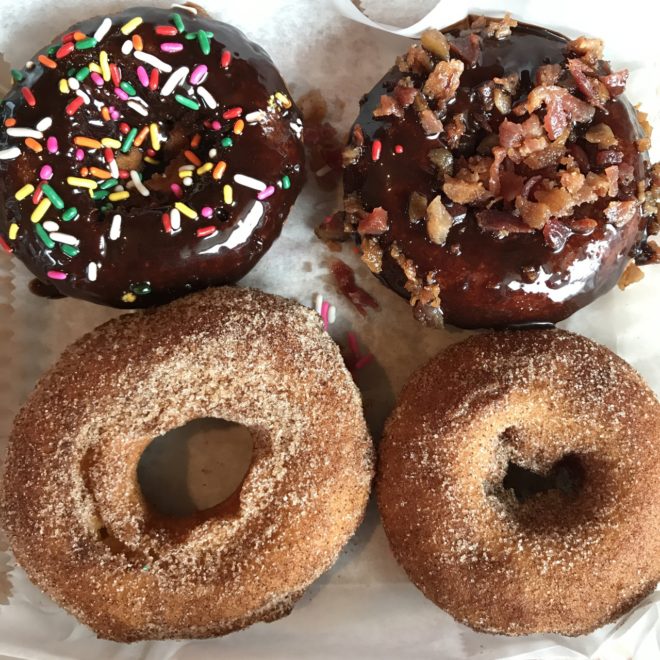 But the rest held together. 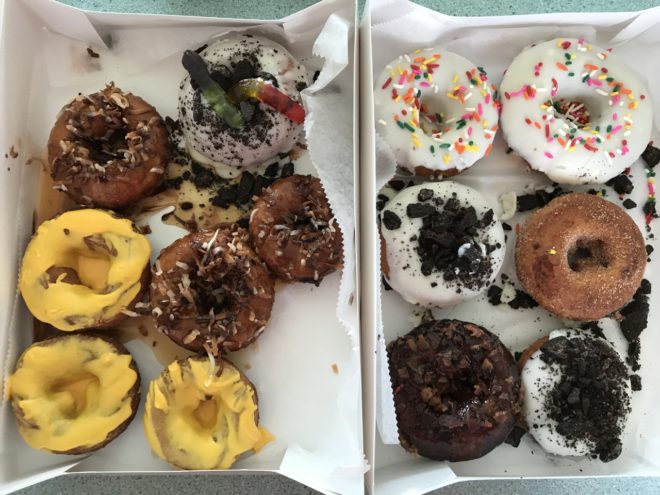 These weren’t exactly blow-your-mind donuts, but they were fun to eat, and certainly a big hit in the house.