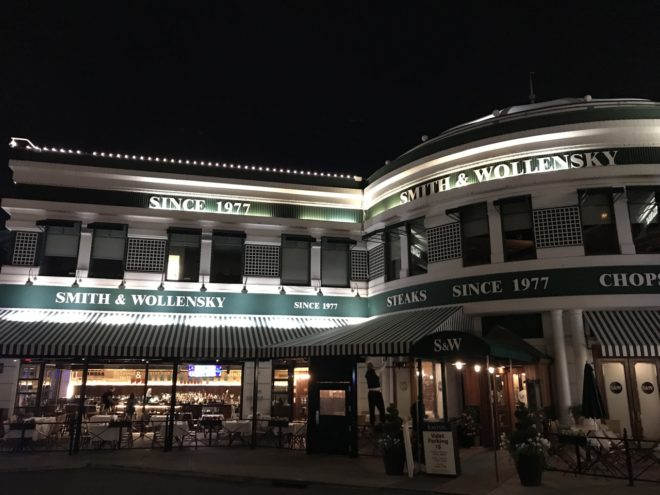 A couple weeks ago our boys were out of town for a week of “Nana and Papa Camp.” This is a week they spend with their grandparents, romping in the woods, playing for hours in the pool, and generally getting a break from their usual summer routine.

Let’s be honest: it’s a break for us, too. The adults need some time for good conversation and a quiet meal. Fortunately, we had been invited by Smith & Wollensky out at Easton to come to dinner, so while the kiddos were away we were treated to a much-needed evening of great food and drink. 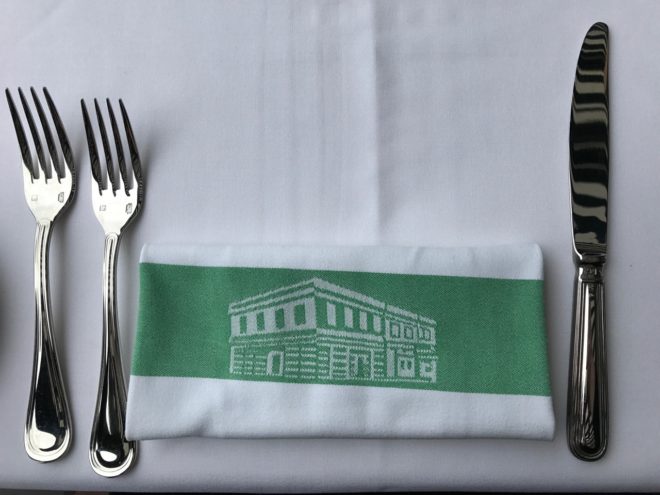 Another point of honesty: we don’t usually dine like this. As much experience as we have with going out to each, reviewing restaurants, exploring new types of cuisine, this type of fine dining is rare for us. 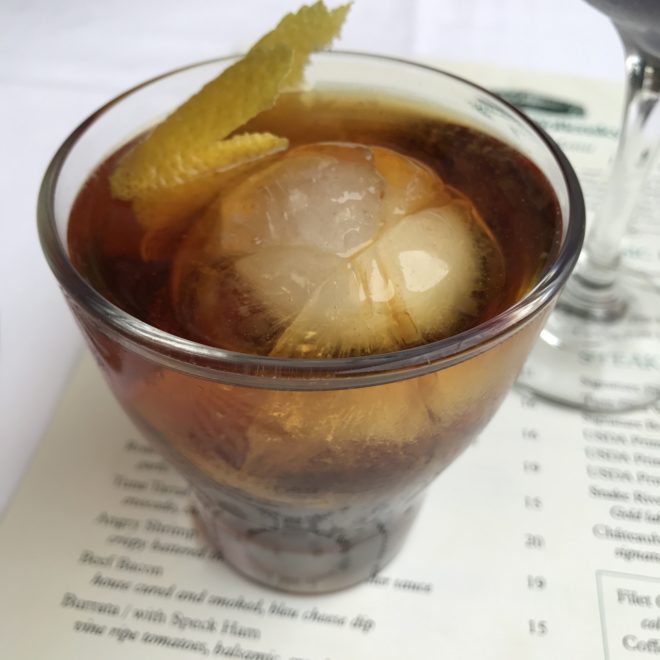 The dinner experience at Smith & Wollensky is certainly an experience: it’s the antithesis of the fast casual grab-and-go, a leisurely meal running the course of almost three hours, featuring artfully prepared foods and drinks.

We started with a round of cocktails, the Toronto with rye whiskey and Fernet Branca for me… 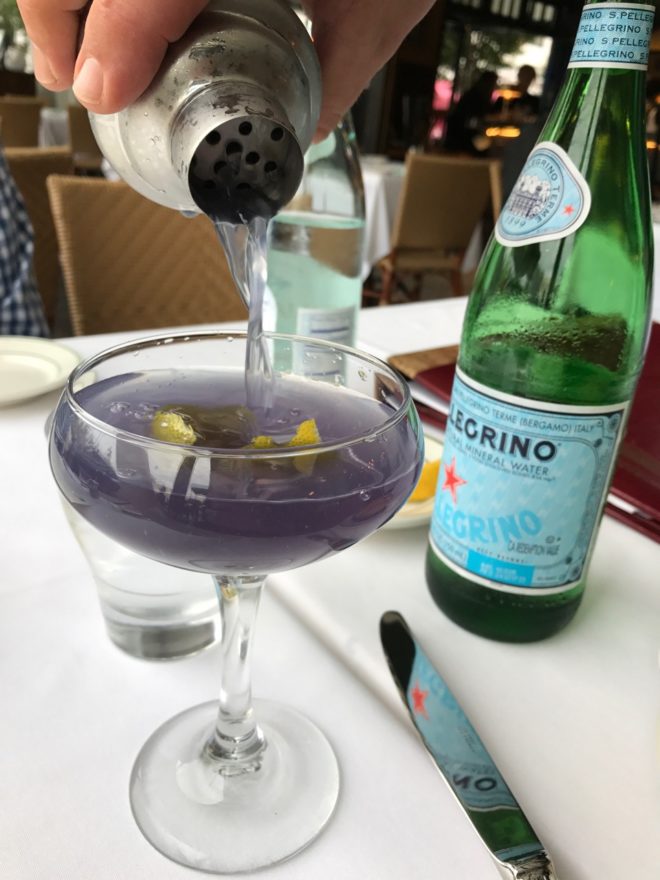 …and an Aviation for Beth, shaken and poured table-side. 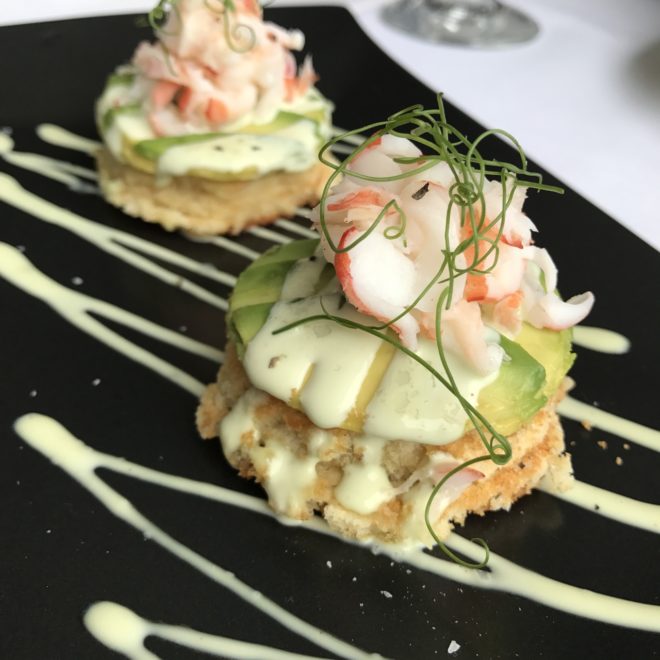 The chef sent over an amuse featuring chilled shrimp and avocado. 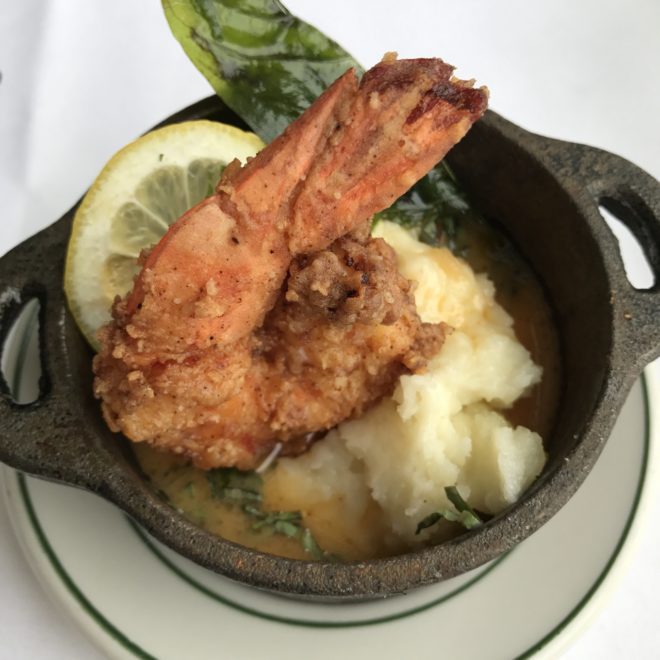 We were also treated to a taste of their fabled Angry Shrimp. It’s a crispy battered and fried shrimp served over mashed potatoes in a very rich lobster butter sauce. 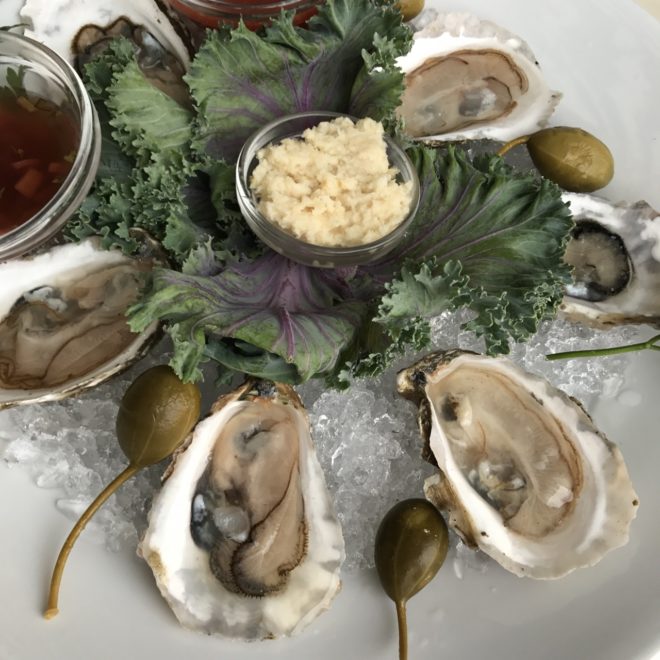 Smith & Wollensky dedicates a significant portion of their menu to seafood, from half or whole lobsters to shrimp cocktails to Oysters Rockefeller. Our server Roman recommended their Seafood Tower, but given all the dishes on the way, we decided to save that for another visit. But we are huge fans of oysters on the half shell, so we tasted a half dozen of them. That day the restaurant was featuring oysters from the northeastern United States.

I know raw oysters are an acquired taste, but I’ve found I appreciate them the more time I spend at the ocean. Properly prepared oysters on the half shell aren’t fishy, they’re clean and a little salty, like getting a refreshing taste of the ocean. Oysters are usually served with cocktail sauce, fresh horseradish, and the like, but I prefer them without accouterments. 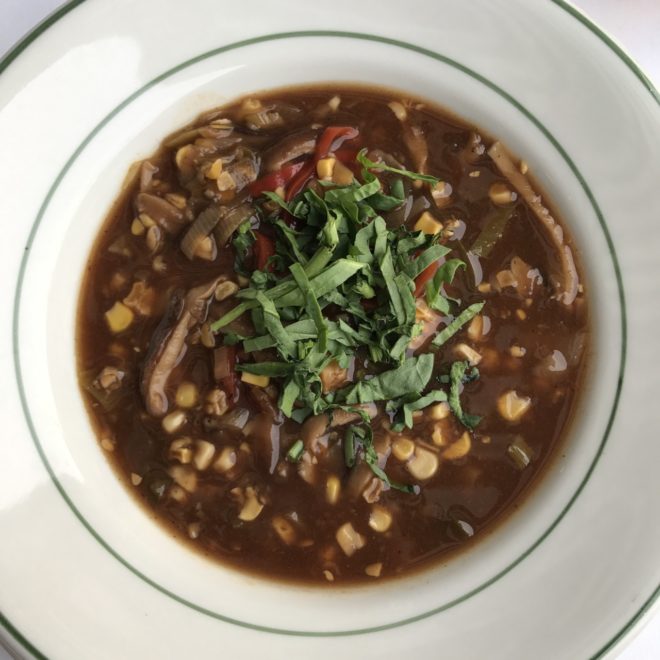 Dinner at places like Smith & Wollensky is a process. Cocktails. Amuse bouche. Soup and appetizers. More cocktails. Wine. Entrees. Dessert. The fun of place like this – aside from steady parade the great-tasting dishes – is being cared for, experiencing the warm hospitality of the team from the moment you walk through the doors. 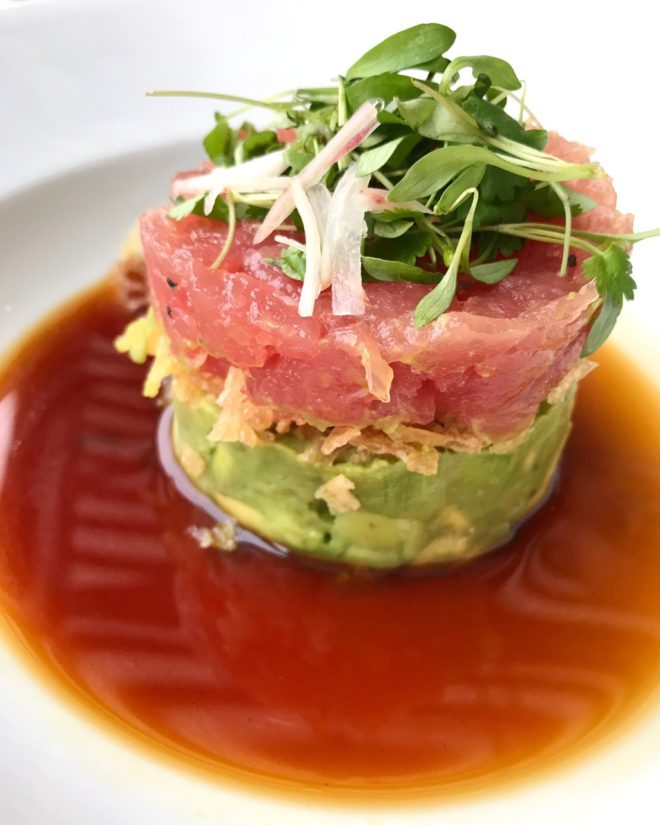 Beth started with the tuna tartare, stacked on top of avocado and lotus root chips and circled by ponzu sauce. 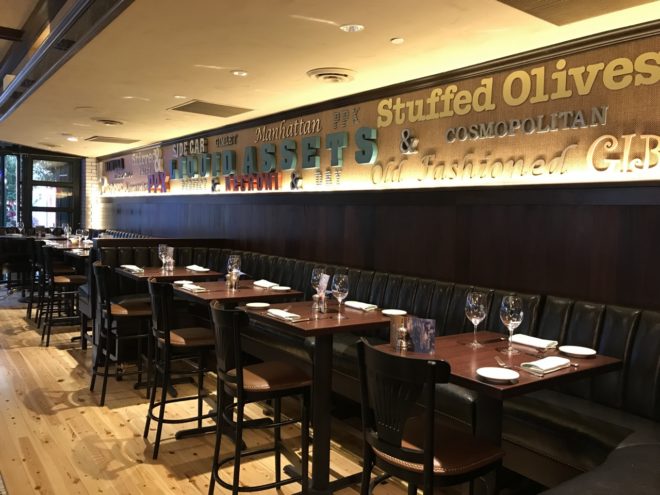 While we waited on entrees, Steve Barstis, the general manager, took us on a quick tour of the newly renovated space. Smith & Wollensky overhauled the restaurant this past spring, upgrading the look and opening up the floorplan a bit. 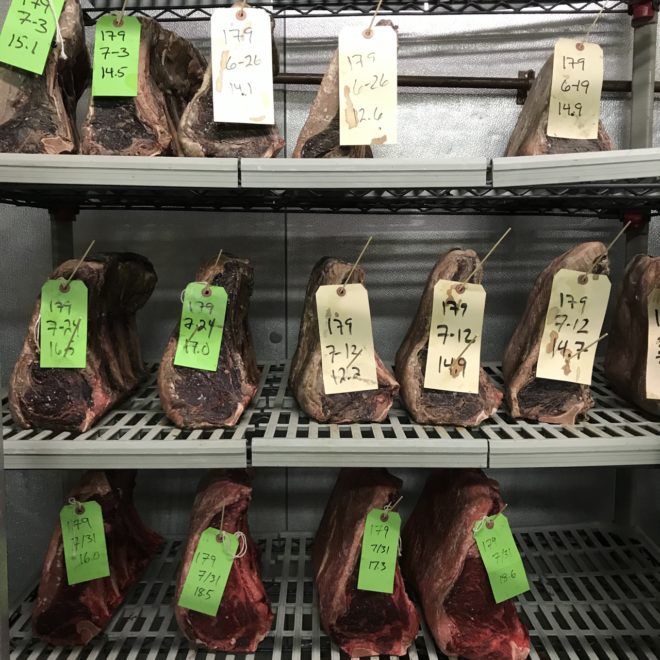 Steve also took us to the inner sanctum, where they dry-age their beef. 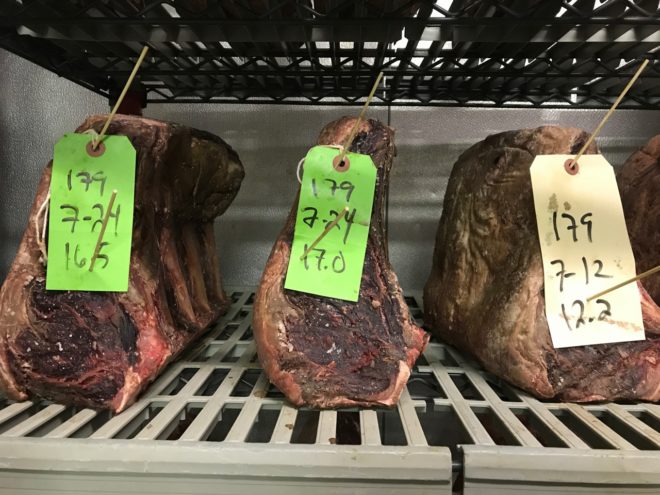 Smith & Wollensky’s steaks are dry-aged for a minimum of 28 days. Dry-aging these subprimal cuts (smaller cuts of beef) concentrates the flavors and creates more tender meat. 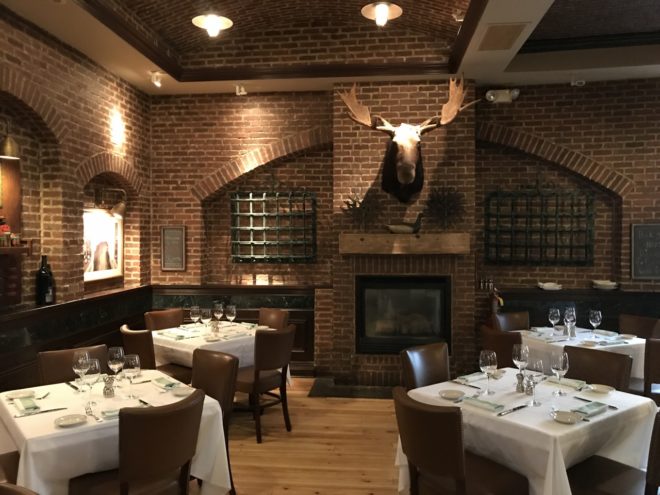 We also walked through some of their renovated dining rooms, both open and private ones. 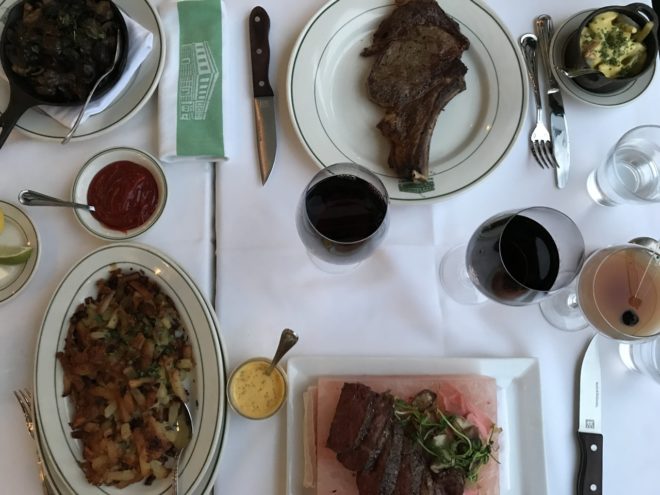 And voila! When we returned to the table, dinner – as well as accompanying wine selections – was waiting for us. 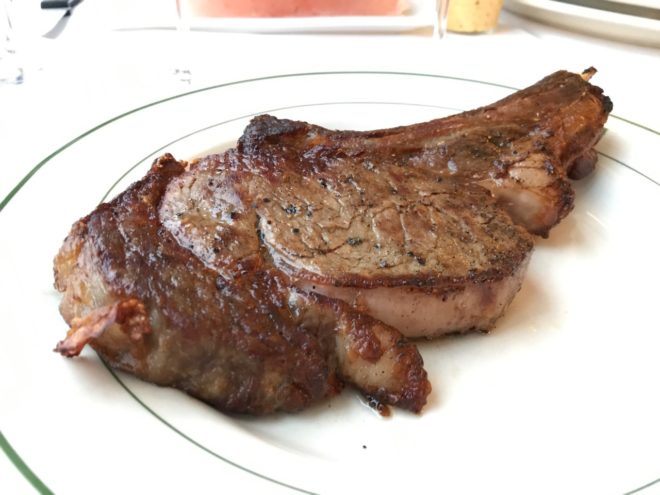 On the suggestion of our server Roman, Beth chose the bone-in ribeye. 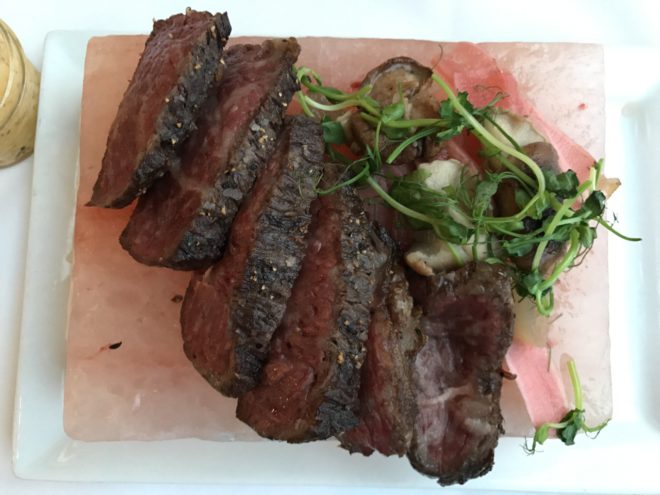 He also recommended one of their signatures, the 9-ounce Snake River Farms American Wagyu New York strip. It’s served on a block of pink Himalayan sea salt with pickled radishes and shitake mushrooms. 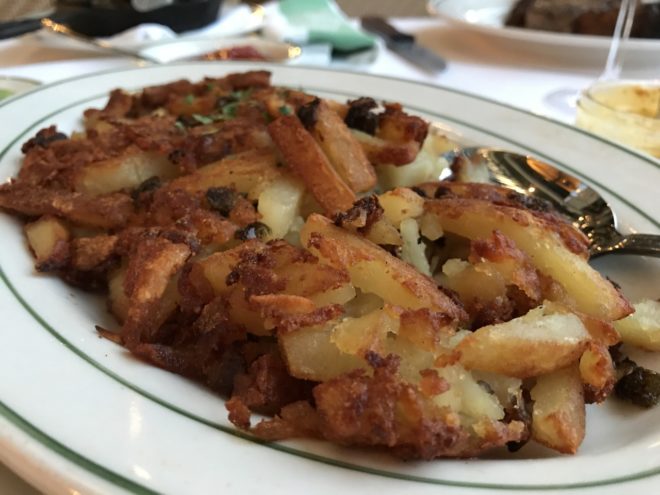 Oh, and did we mention the sides? They’re large enough to be a meal by themselves, but they’re part of the experience. The sides are grouped as Classics, Vegetables, Potatoes, and Mac & Cheese. They range from down-home to fancy, like simple crispy hash brown potatoes (above) to mac and cheese with lobster or braised beef ribs. 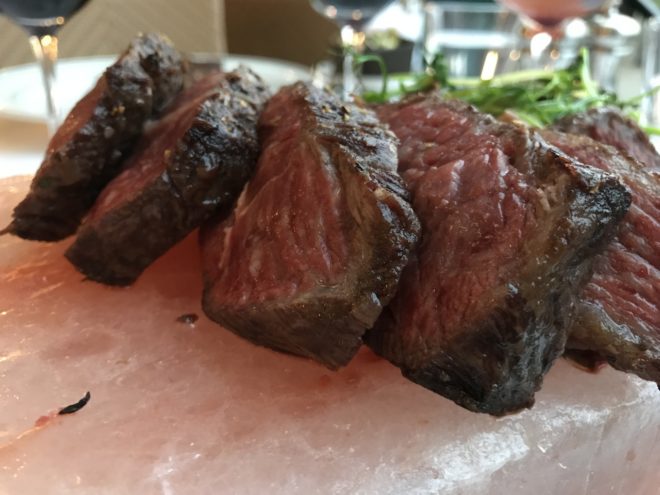 Both cuts were amazingly tender and obviously artfully prepared. The waygu was especially good. The sea salt lent just a touch of seasoning without overwhelming the beef, and the pickled radishes and mushrooms offered a bright counterpoint to the savory and earthy meat. 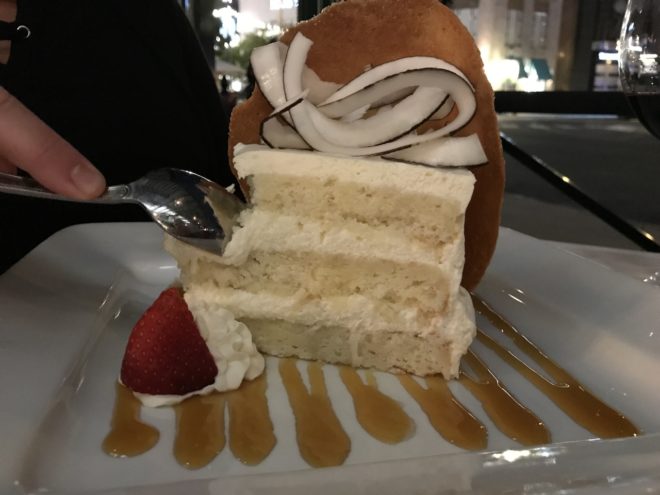 And yet, even after multiple courses we were plied with desserts (twist our arms…). Smith & Wollensky’s dessert menu is small but mighty, and the portions rival those of the entrees. Beth chose a coconut cake with strips of fresh coconut adorning the top. 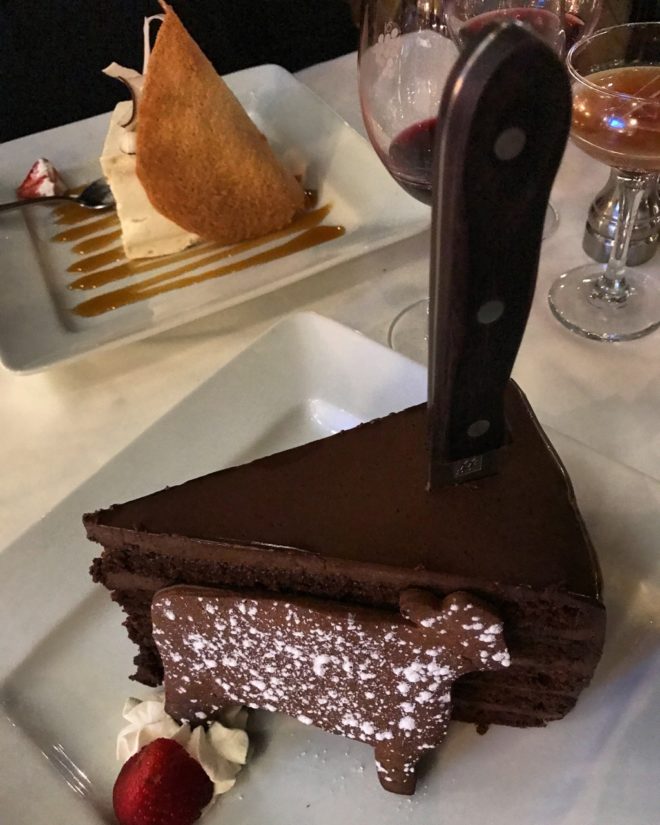 And I can’t resist anything chocolate. The massive chocolate cake arrived with a steak knife driven through it. The slice of cake was easily close to 7-8 inches tall, which made me wonder at the size of the full cake. It was rich and creamy and decadent, and it took us three days to finish the leftovers. 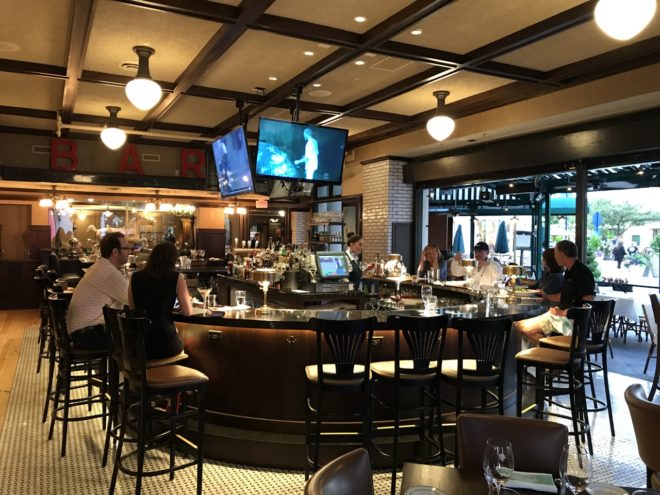 We lucked out with a beautiful August evening; the patio and outer lounge areas opened onto the bar area. 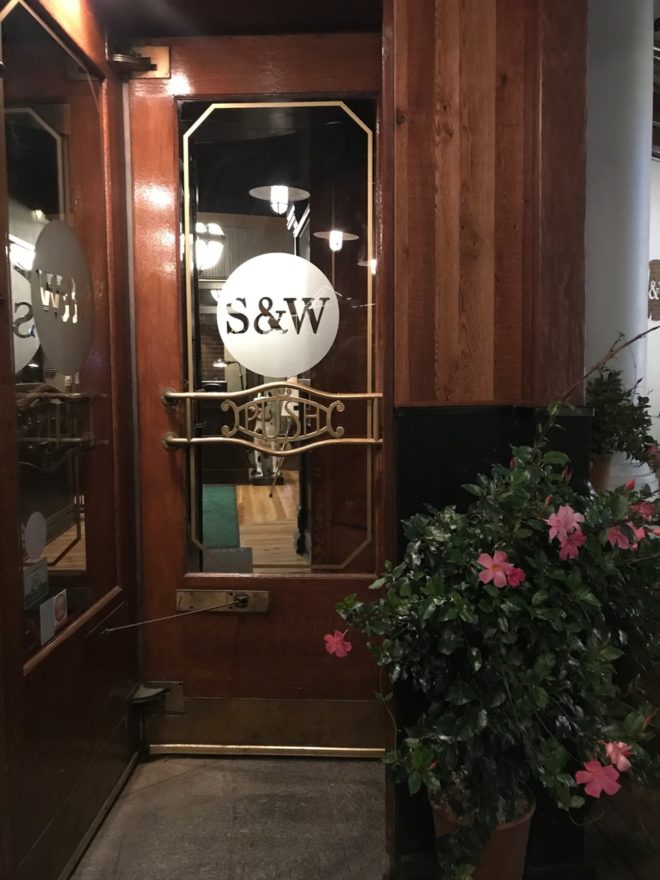 Thanks for a lovely evening, Steve, Roman, and everyone from Smith & Wollensky!

Disclaimer: this meal was provided by Smith & Wollensky. Photos and opinions are our own.