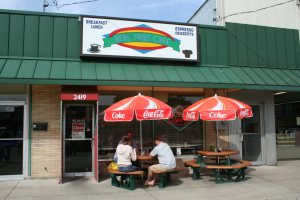 IMPRESSIONS: Okay, I need to lay a couple biases out on the table. Real Food Cafe is one of my ideals. My pillars. My standards. My measuring stick. You get it. Real Food Cafe has been open in Grand Rapids for a few years now, and Beth and I have frequented more times than we can count. It’s a standard stop during any visit home to the fam; my parents are regulars there, to the point that they say hi to the owner, and they know the names of the servers. So coming here to actually review the place means I have to put my biases up front. I love the place. It’s fantastic. To me, it’s practically the epitome of a breakfast restaurant: small, familiar, local, and high quality. 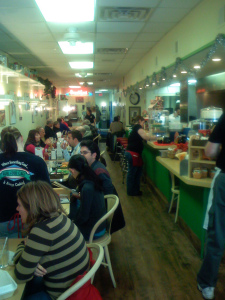 Real Food is located in an old Baskin Robbins store in the Alger Heights neighborhood of Grand Rapids. I grew up less than a mile away, and I still remember the smell of that ice cream store. After BR pulled out, it went through several manifestations, until Real Food came along and made it a legend. Look at that picture above… that’s how breakfast places should be. Charmingly crammed, with the breakfast preparers and breakfast eaters in close proximity. When it comes to restaurants (but breakfast places in particular), I find it reassuring that the owners would let you sit there and watch them cook. It’s honest. It’s like they’re saying, “There’s nothing to worry about here. I’m making your food right now, and not pulling a plate of manufactured what-have-you from the freezer, warming it up, and calling it a meal.” And Real Food (as the name implies) is one of those honest places.

The picture above gives you a sense of the color and atmosphere of the place. It’s lovely and noisy. One thing you can’t see, however, is the standard crowd of people near the door or out front waiting to eat. But no one ever seems to mind waiting. (On a side note, all of these pictures were taken on my wife’s iPhone. Don’t they rock? Go Steve Jobs!) 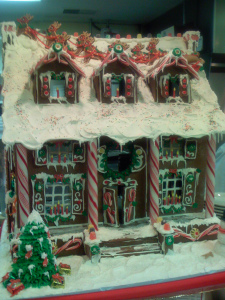 Here’s another fun picture. Every Christmas, Brian (a former chef from Real Food) builds a gingerbread house that they put in the shop. It’s been written up a bunch in the local papers, and its attention to detail makes it worth checking out.

ATMOSPHERE: I’ve already gone to some lengths describing the atmosphere here, so I won’t say too much more. A few descriptors: noisy, lots of clanking and sizzling, plenty of families with kids, buzzing conversation, bright and colorful dishware, warm coffee, enticing breakfast smells. A long counter full of people. Servers slipping deftly through the crowd with stacks of food. Really, the only thing I don’t like about the place are the chairs – I always feel like I’m slipping out of them. However, knowing the limited room of the restaurant, it makes sense that every seat isn’t a plush armchair.

FOOD: Here’s where the store lives up to its name. The food at Real Food is just that: freshly prepared, in huge portions. This is great comfort food without being super greasy or messy. The breakfast menu features some good combos of the meat-eggs-potatoes variety. They also have a range of omelets: from simple cheese omelets to the Farmer’s Omelet to vegetarian offerings and the Monster Omelet (lots of meat). There’s great pancakes and French toast. Beth likes the Veggie Benedict. There’s something for everyone. Real Food also has a lunch menu, but I’ve never been there in the p.m.

Let’s get to some pictures! This particular day I tried the Eggs Benedict for the first time. Beth has got me into Benedicts more as of late. Real Food’s is a fine example: two lovingly poached eggs, with a sweet/spicy hollandaise sauce. The sauce is just right: not watery, but not goopy. I’ve had hollandaise sauces that are sludgy, with the oil separating out of the mixture. Gross. But here: not. 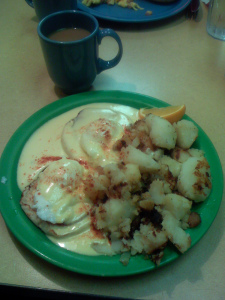 Also, I have to say that Real Food’s potatoes are some of my favorites. Big, thick chunks that are cooked through. I love it when some edges get dark and crispy. They strike a nice balance: crunchy, but not dry. You just know that someone in back chopped these up that morning. 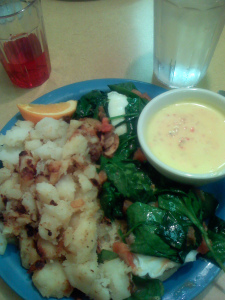 This is Beth’s favorite: the Veggie Benedict. They take the normal Benedict and replace the meat with tomatoes, mushrooms, and spinach. They’ll also gladly put the hollandaise on the side, by request. 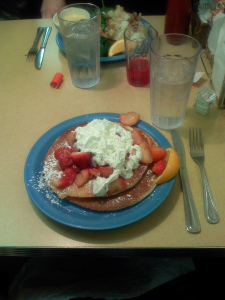 My brother Greg’s favorite at Real Food: Strawberry Pancakes. Why didn’t he order French toast? You should ask him. 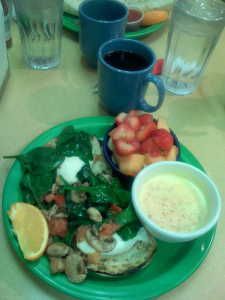 My mother goes for the Veggie Benedict as well. Look at how bright those greens are! With the fruit on the side, it’s a nice, healthy and filling choice. 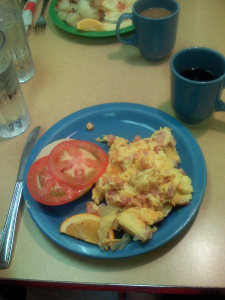 Sister-in-law Katelyn opted for the breakfast bagel with eggs and ham. 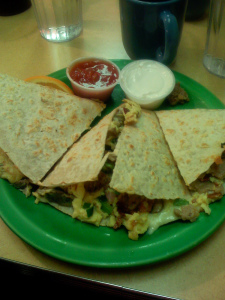 And Dad went with the special of the day: a breakfast quesadilla. Just look at all these pictures! We passed around Beth’s iPhone, so we could document the colorful foodiness. 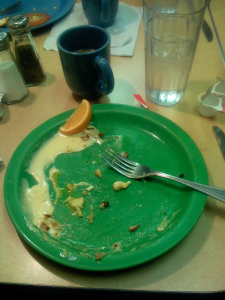 A picture is worth a thousand words.

SERVICE: The folks at Real Food are top notch, too. Always friendly, constantly refilling your coffee, always personable. They recognize the regulars and acknowledge their visit. In the picture below, the guy on the right is Frank, one of the co-owners, while the woman on the left is Barb, the manager and friend of the owners. Frank co-owns of the place with his wife Renee (who works mostly at the newer store nowadays). He gave me permission to take the picture, but was too busy to hold still for it. Can’t blame him! 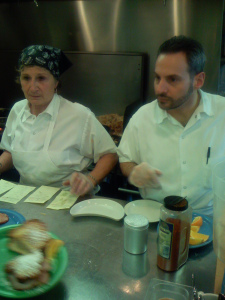 Here’s another shot of Barb doing what she does best. Look at how busy they are! 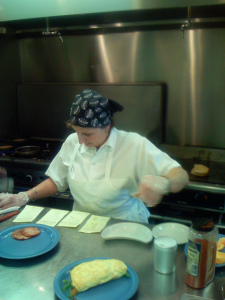 OVERALL: So there you have it! Let me say two things in summary. First, Real Food Cafe doesn’t have a website, because they don’t need one. They don’t need to employ anything else to bring in customers, because the food and service does it for them. And second, Frank and Renee opened a second place a year or two ago, on 5430 Northland Drive in the northeast end of Grand Rapids, out towards Rockford. Is it any surprise that they’ve expanded already? I think that that says it all. Just to end, here’s a picture of Real Food Cafe the day I wrote this review. Looks quaint with the snow, doesn’t it? You know it does. 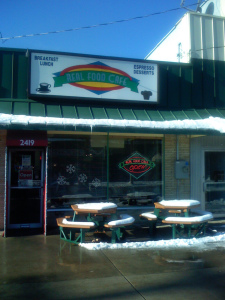