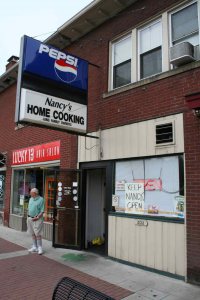 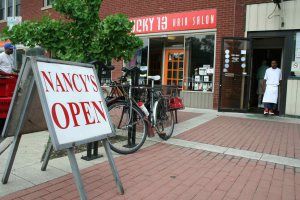 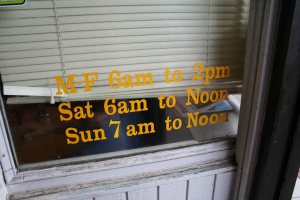 IMPRESSIONS: Nancy’s Home Cooking is a Columbus institution that has been a staple of the Clintonville neighborhood for forty years. It’s a shame that I’ve only been three times, including today, and that I haven’t reviewed it yet. The most significant reason for this is that Nancy’s closed on Monday, June 1st (although hopefully not permanently). I’ve been meaning for years to review the place, and it’s kinda sad that the restaurant closing is what finally got my butt in gear to visit. This is made even sadder by the fact that I had such a great experience there, and that in some ways the simple diner breakfast at Nancy’s is the exact type of breakfast that I usually long for. 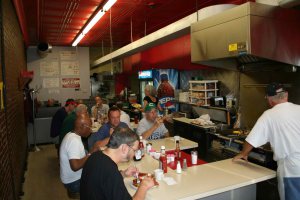 ATMOSPHERE: Nancy’s is a small place. You could easily drive by it on High Street if you didn’t know to look for it. From the outside, you see one small door next and a large plate glass window. There’s a small sign hanging off the front of the building, but even the name is dwarfed by the blue Pepsi sign above it. 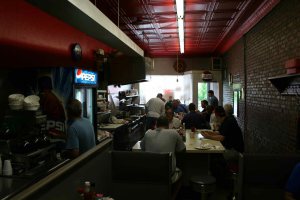 Inside is equally small. Above you is a bright red tin roof. One wall is all brick, with a few Pittsburgh Steelers pennants and signs, and the other wall is the kitchen. There are exactly 4 booths, 2 counter islands, and 1 kinda awkward round table near the door. The islands and round table are right next to the grill; when you sit there, you’re basically sitting in the kitchen. When we visited , there was a very diverse mix of customers. Some folks looked like they had just wandered in off the street, some were dressed pretty casually, like a friends enjoying a simple breakfast, and several customers wore suits and ties, clearly on their way to work. 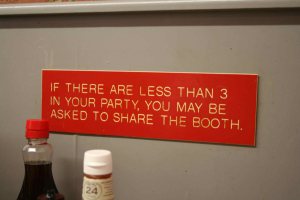 So probably about 30 people can be seated at once. I’ve never seen it, but I guess it’s typical to have a line out the door on weekends. Many of the signs around the diner remind you that you may have to squash into your seat. Other signs (see the picture below) tell you not to hold booths, and remind you to “Eat it and beat it.” Everyone’s welcome at Nancy’s, but if it’s busy, eat and get on with it. 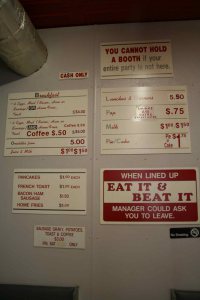 FOOD: Nancy’s excels at doing the diner breakfast, and doing it really well. It’s about as basic as it could be, but just so good. The entire breakfast menu hangs on the wall. On this last visit, I sat with my back to this wall, so I kept having to turn around to read it. The menu options are pretty simple (which makes choosing easy). Plus they’re dirt cheap. For instance:

$4 gets you eggs, your choice of meat OR potatoes, and toast
OR
$5 gets you the eggs, the meat AND potatoes, plus toast
.50 for your coffee
$3 for an omelet (I’ve read a lot about the garbage omelet)
$1.75 for a slice of pie
$1 for each pancake or piece of French toast

I splurged and got the $5 AND breakfast (none of this OR stuff for me!). First, the toast came out on a paper plate, nice and crispy, with the Country Crock at your disposal. 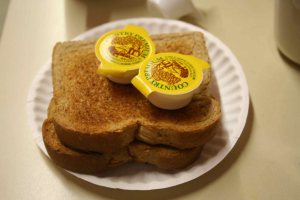 It took a few minutes after the toast hit, but then the rest of the breakfast landed. 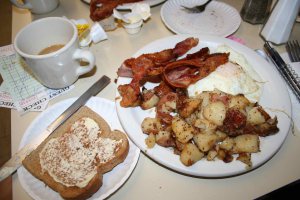 Oh my, it was so delicious. The toast by then was a little cold, so the butter spread didn’t melt too well. But I soon remedied that by piling on some hot over-easy eggs. The rest of the breakfast was fantastic. Well seasoned, chunky potatoes. Thick, crispy bacon. A little bit greasy, and oh so filling. You really couldn’t ask for a better diner breakfast. 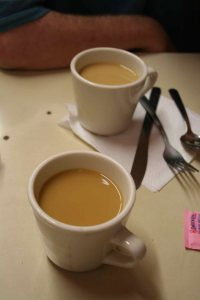 SERVICE: Every time I’ve been to Nancy’s, I’ve been served by Cindy King, who has owned Nancy’s since 1970. Cindy is no-nonense, fast to take your order, quick to refill your coffee, and does it all with a smile. She clearly knows all the regulars. While others work the grill, clean dishes, and prep the food, Cindy shuttles around the restaurant taking and delivering all the orders. 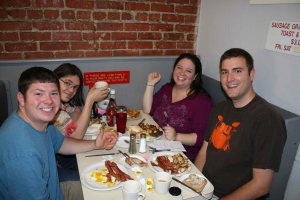 As we were leaving, a couple of businessmen next to us finished their meal, then both hauled out cameras to photograph the restaurant. We took a picture of the two of them, and they returned the favor. This is Chip and I with our friends Andy and Amanda. Later, while we paid up front, one of the other employees, a middle-aged gentleman, kept making jokes at the expense of the Cleveland Browns to Chip. Clearly the folks at Nancy’s are a Steelers-favoring crowd, so Chip was in good company.

OVERALL: A couple weeks ago I did a presentation on the arts company of which I’m a founder, Wild Goose Creative, at Pecha Kucha. Later in the presentation, a photographer named Rainer Ziehm shared pictures of his world travels, saying “I take pictures of things that won’t be around much longer.” When he said this, it made me instantly think of places like Nancy’s. The small. The local. The personal. The one-of-a-kind. 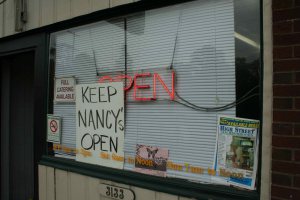 I can’t really claim to be a Nancy’s regular, given that I’ve visited a total of three times in two years. But it still made me really sad to read about the closing, and then to see the place again with my own eyes and realize what it gem it was. I’m sure it’s easy to romanticize the closing – after all, it’s closing for simple money issues (medical bills for the owner, and expensive renovations needed for the building) – but seeing the regulars chatting with Cindy, and the businessmen taking some pictures (I wonder how many times they had been over the years?), and the guy making jokes to Chip… it all made me wonder what this place means to the real regulars, and what they’ll do now that it’s closed.