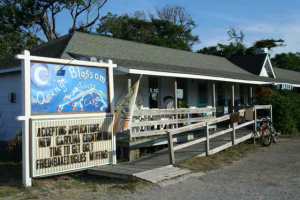 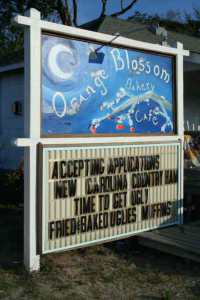 IMPRESSIONS: The Orange Blossom Bakery & Cafe is a decades-old institution on Hatteras Island, in the North Carolina Outer Banks. The Bakery & Cafe stays open seasonally, and is usually mobbed by the summer crowd every morning. The regular visitors know to hit up Orange Blossom early, in order to score some of their famous Apple Uglies. I’ve been to the Outer Banks several times with my wife’s family, and we pay the bakery a visit by bike or by car at least once or twice a year. 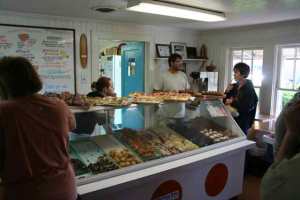 ATMOSPHERE: Like a typical morning at Orange Blossom, the bakery was busy busy busy! We arrived about 45 minutes after it opened, but still managed to beat a major crowd. 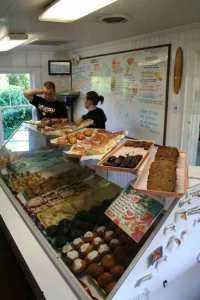 The bakery itself is tiny: one room with a few shelves packed full of goodies. Behind them the kitchen buzzes with five or six workers. Near the front door, a separate hallway leads to a small room with a handful of tables. 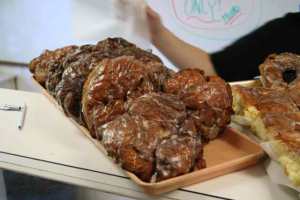 Orange Blossom offers a range of donuts, muffins, and pastries, plus breakfast and lunch sandwiches (scroll down their menu to read the description of The Buxton), but… everyone really comes to the bakery for their Apple Uglies. These babies come out of the kitchen on big, long, steaming hot trays. 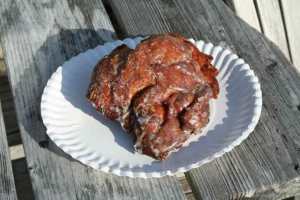 An Apple Ugly is basically a fried apple fritter: dough mixed with apples, then fried and slathered with a sugar icing. When they’re warm, it’s a little bit of heaven. On the Orange Blossom website, they claim the pastries are called Uglies because they really are ugly pieces of dough. My father-in-law suggested, after we ordered a dozen to take back to the house, that they’re called Uglies because the line gets ugly after you order so many. Whatever the reason, the sheer taste and intensity of the sugar rush outweighs any concern of visual aesthetics. 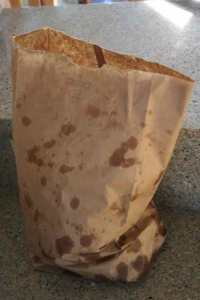 Here’s one of our bags, filled with six Uglies, after we arrived home. Mmmm. 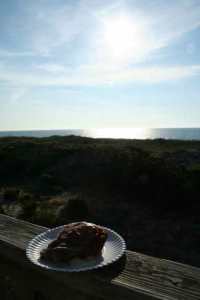 Artsy photo. I call this “Apple Ugly In The Morning, As The Atlantic Looks On.”