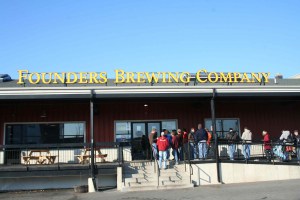 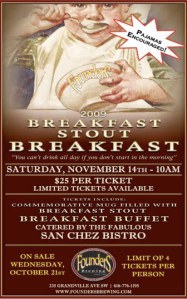 IMPRESSIONS: This is a little strange in that I’m reviewing a brewery for my breakfast blog. I can’t say I get this opportunity very often, but here’s my chance to combine two loves: breakfast and beer. Normally I don’t find myself drinking in the a.m., trust me. 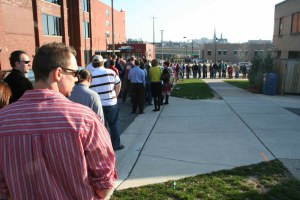 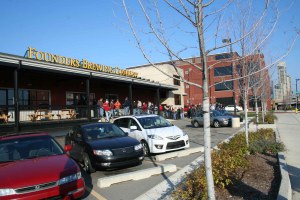 ATMOSPHERE: Founder’s is probably my favorite brewery, so I love everything about visiting the place. It’s one big open space with a long bar, plenty of tables, a stage on one end, large windows that open onto their patio, and big glass walls so you can see the brewery operations. It’s spacious and cozy at the same time. 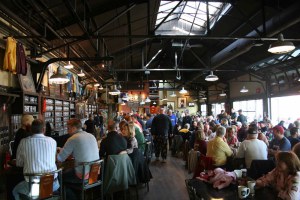 During the breakfast they were packed to capacity at about 225 people. It was crowded, but navigable. Kudos to Mark Dorich (the event coordinator) and the Founder’s crew for successfully organizing a sold-out beer event like this. 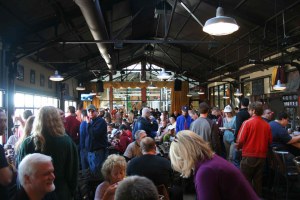 FOOD: The breakfast food for the event was provided by San Chez, one of Grand Rapids’ best restaurants. All of the marketing for the event bragged about the food catered by San Chez. This had me all excited, because I’ve reviewed San Chez Cafe’s breakfast before, and had heard of some great items at last year’s Breakfast Stout Breakfast. 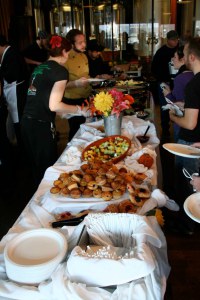 The food turned out to be okay, and that was about it. While it was catered by San Chez, and all the folks there were super nice and enthusiastic, we were treated to a pretty standard breakfast buffet. This was disappointing, especially knowing how good of a breakfast San Chez can really create (see the review linked above). Granted, the beer, more than the food, was the focus, but after all the advertising featuring San Chez’s food, I expected a little more. 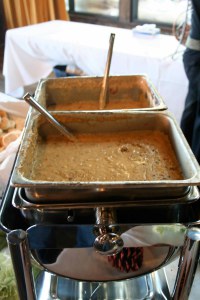 The buffet started out with a basket of pastries, then fresh fruit, then biscuits and gravy (pictured above). 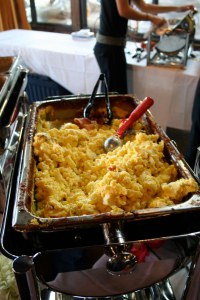 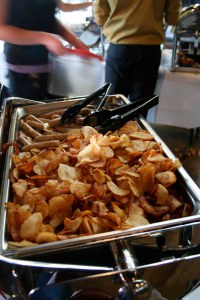 And bacon, sausage, and potatoes. 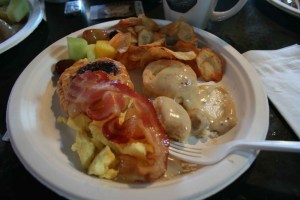 Here’s my first plate of breakfast (yes, I did go back for seconds). The pastries were pretty standard – you had a choice of a danish or a muffin. Fresh fruit was fresh fruit. The biscuits were too dry and hard – they could have done a much better job of keeping them fresh and moist. The sausage gravy (there was a vegetarian option, too) was good, but it couldn’t do enough to soften the biscuits. The gravy itself had chopped up sausage links in it, almost as an after-thought to justify the “sausage” in the title. Eggs were fine, bacon and sausage links were pretty standard. The potatoes were the biggest disappointment – they were essentially stale potato chips. Again, all the gravy in the world couldn’t soak them through. 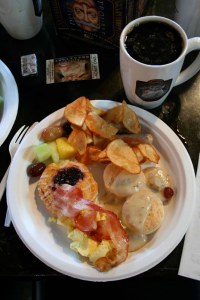 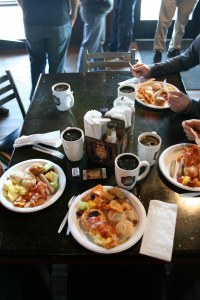 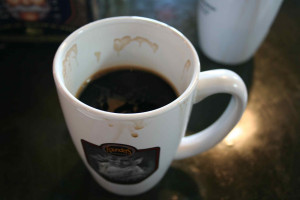 Clearly the capstone of the breakfast, however, was the Breakfast Stout itself. Served in a commemorative mug, the stout looks like a real cup of coffee, except with a tan foam across the top and a small bite from that 8.3% alcohol by volume. It’s a delicious, delicious beer, and the breakfast itself is more of an excuse to go drink Breakfast Stout at the brewery. The Breakfast Stout is probably one of my top-ten favorite beers of all time, and my second favorite of Founder’s. It’s beaten out by a similar stout called the Kentucky Breakfast Stout, a stout brewed with vanilla then aged for a year in bourbon barrels.

SERVICE: Founder’s planned out this event to a T. They started right at 10, and handled a line of 225 hungry and thirsty customers easily. We arrived just before 10 and were at the back of a line that curved around the corner, but it took no time at all to get in. 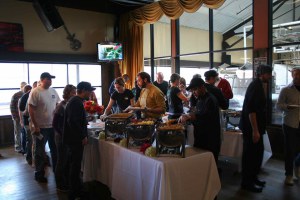 The service was buffet-style, but San Chez planted servers at the stations to control the portions. There turned out to be plenty of it – I heard they ran out last year – in fact, there was food left over a couple hours later. You picked up your mug at the door; each mug had a ticket in it for one fill-up of Breakfast Stout, which you picked up at the bar. All in all, it ran smoothly. We were in a group of five, at the back of the line, and we found a table, got our beer, and walked through the buffet line all by 10:20 or so. Not bad too shabby. 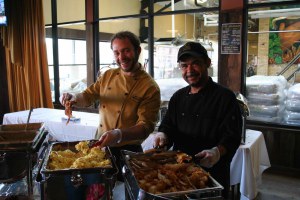 Two servers in particular were having a good old time with it. One of the guys (the one on the left) told me, “Where else can you drink beer and eat greasy food at 10 a.m. It’s America!”

OVERALL: Yeah, I’m planning on heading back for next year’s Breakfast Stout Breakfast. Taking everything into account, it’s a great event, especially for beer geeks. The quality of the featured beer and the brewery itself eclipse the mediocre food. Hopefully San Chez can step it up a bit and major Founder’s quality. But what better way to enjoy a top-notch beer at one of the world’s best breweries, than by adding some breakfast and a little camaraderie into the mix? 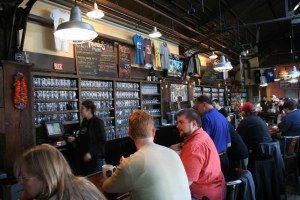 Here’s a look at the bar itself, plus the brewery. 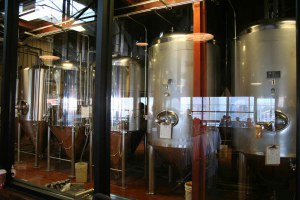 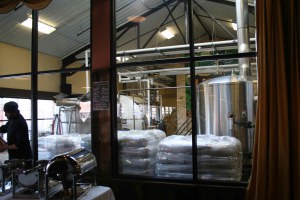