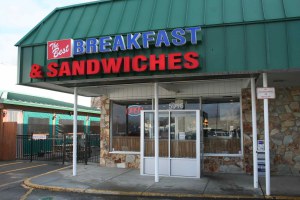 [Update: The Best is now closed. Delaney’s Diner has opened in its place.] 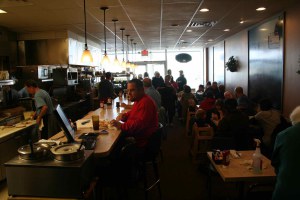 IMPRESSIONS: You know, it’s gutsy for any place to name itself The Best Breakfast and Sandwiches. It’s gutsy to name yourself The Best of anything. Inevitably people will take you to task if you don’t have the best [fill in the blank]. People will call you out on it. “You say you’re the best, but…” It’s like a film reviewer writing about The Fantastic Mr. Fox. They’re going to say something about how fantastic – or not – the movie is. 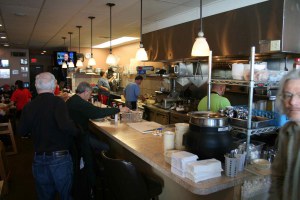 ATMOSPHERE: The Best Breakfast and Sandwiches is located in a strip mall off busy Westerville Road, in a section set further back from the road. It takes a little searching to find it, but the sign is big enough. We hit the place up on our way to cut our Christmas tree the Friday after Thanksgiving. When we walked in, the restaurant was packed except for one fortunate, empty, little table. 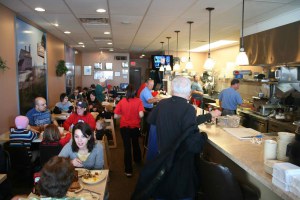 Best Breakfast is laid out like any diner. Big, long counter overlooking the kitchen on one side. Rows of tables or booths on the other. 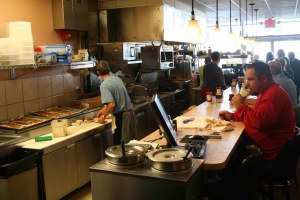 The place was really humming with activity that morning. Tables full of customers in conversation, three or four folks bustling about in the kitchen, and a handful of servers running up and down the restaurant.

FOOD: I gotta say it… Best Breakfast’s food is honestly some of the best diner food I’ve come across. It’s straight-up fantastic: homemade, not greasy, and in generous portions. 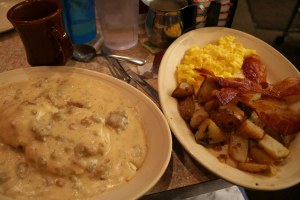 A customer next to us recommended the Sausage Gravy and Biscuits. She said to try it because the gravy was thick and full of sausage. 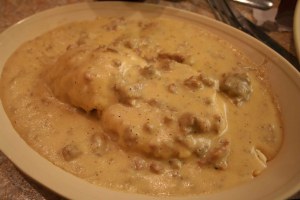 She was absolutely right. This was a peppery and chunky sausage gravy, very flavorful and generously poured over two biscuits that flaked apart. Sometimes I think restaurants serve dry biscuits, thinking you won’t notice if they soften them with gravy, but these biscuits were clearly fresh and soft, just like they should be. The gravy itself was a little darker than most. We figured this resulted from the roux they made, which our server later confirmed. Each batch is made fresh that day. 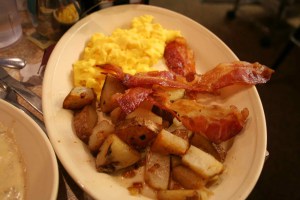 I added the eggs, potatoes, and bacon. The potatoes were chunky and fairly well seasoned. Not my favorite, but still very good: browned enough yet still soft. Good, crispy bacon – just about how I like it. And the scrambled eggs were prepared exactly the way I like them. Too often scrambled eggs are served dry, but these were a little wet, like the cook pulled them off the flattop just before they were done. I could seriously go back just for a big plate of the scrambled eggs. 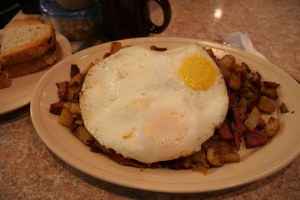 Based on the same customer’s recommendation, my wife tried the Corn Beef Hash with two eggs on top. Again, we were told how Best Breakfast makes their own corned beef, with nice meaty chunks of beef mixed with their potatoes. The whole meal was delicious – another strong dish, just like the sausage gravy and biscuits. 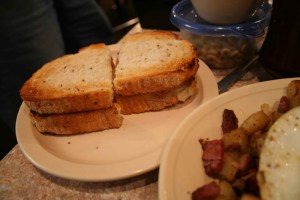 Their homemade rye bread. I don’t know whether it tasted better because I knew it was homemade (like all their bread – awesome!), but it just tasted great. Spot on. 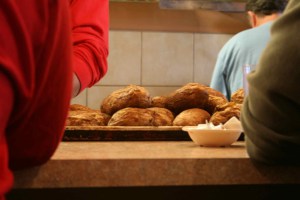 I snagged this picture later in the meal: baked potatoes fresh out of the oven, soon to be chopped up. This, to me, summarizes the honesty of Best Breakfast’s food. In general, there’s something nice about diners’ openness: you can sit at the counter and see the whole kitchen. You can watch the cook prepare your entire meal, so you see where it’s cooked and where it comes from. You can talk with them while they cook your food. And I think Best Breakfast does an especially good job of capturing that honesty of the good old fashioned diner. You see the bacon being grilled. You see the potatoes being baked and chopped. They bake all of their bread in house. And this all results in one of the best comfort food breakfasts I’ve had in a long time.

SERVICE: The honesty in their food is matched by the friendliness of the service. Sometimes neighborhood diners make you feel like an outsider. It’s a bit of an in-crowd, a group of regulars who has their routine and is comfortable there, and doesn’t want that disturbed by newcomers. Not so with Best Breakfast. Our server Suzanne was attentive, friendly, and clearly wanted us to feel welcomed. She even introduced us to the owner, Tom, who chatted with us briefly. My wife snapped a picture later of Tom working behind the counter on the potatoes. 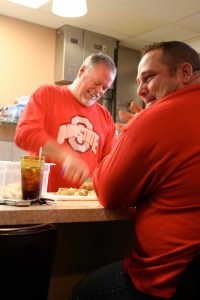 The rest of the customers were just as friendly. When we first sat down, the couple next to us started making recommendations on what to try. They playfully bantered back and forth with Suzanne. Another couple who sat there later actually got up and helped Suzanne clean and move tables! Talk about regulars who are comfortable and familiar with the place! But the best part about the experience is how proud they are of their restaurant. Both Tom and Suzanne wanted to talk about what they do and how they do it. Those are the best places – where they involve you not just as a consumer of their product, but a participant in the process that created it.

OVERALL: Best Breakfast is a great experience in every aspect, one of the few places that stakes a serious claim to the “Best” in their name. This is my new model for the small neighborhood diner: excellent service, delicious and homemade comfort food, cozy setting. My wife and I are already eying the calendar to see when we can return.

OTHER LINKS:
-> video clip featuring The Best from Breakfast Special