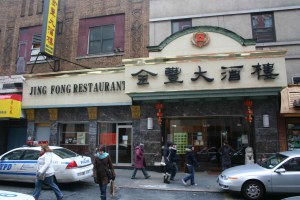 IMPRESSIONS: My first foray into a multicultural breakfast! On the advice of some trusted food friends, I sought out some authentic dim sum while in New York City. Further advice from other friends led us to Jing Fong, one of the city’s more well-known stops for dim sum. 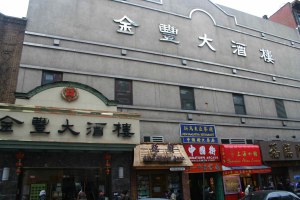 I had to do a little bit of reading about dim sum: the literal translation means “to touch your heart.” It originated in the Canton province of China, and is typically served starting early-to-mid-morning and lasting until early afternoon. When dim sum came to the Western world via Chinese immigrants in the 1800s, the tradition of dim sum is thought to have actually sparked the creation of brunch: a large, late morning meal that combines the sweet and savory dishes of breakfast and lunch.

Thus, my justification for reviewing dim sum for a breakfast blog: it’s a Chinese brunch.

ATMOSPHERE: Our meal at Jing Fong proved to be one of the most exhilarating and bizarre experiences of our trip to New York City. 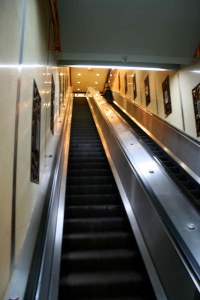 We didn’t know what we were in for when we entered the tiny front door on Elizabeth Street, stepped into the small lobby, and then took the looooooong escalator up… 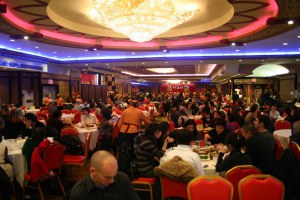 …into an enormous and almost-capacity dining room that seating around 700. 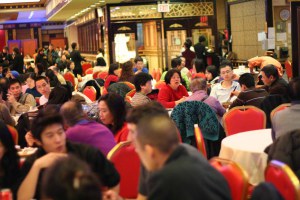 The place was absolutely packed with people. A vast majority of the clientele was Asian, although it was fairly mixed overall. The bright dining room was buzzing with hundreds of conversations and the sounds of servers and their carts trundling around. (More on the service below.)

FOOD: Dim sum consists of a wide variety of foods, all served in small portions, so we ended up eating 10-12 different dishes. I’ll be honest: we couldn’t identify everything that we ate (although we did decline the fried chicken feet), but we loved almost everything we had. 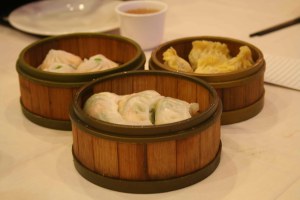 Some of my favorites were the steamed dumplings with vegetables and shrimp that came out in stacks of these wooden bowls. These were served first. 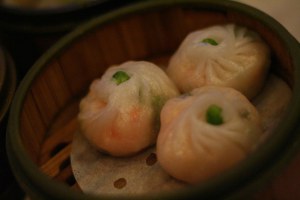 This one with shrimp and veggies and capped with a single pea was probably our top favorite of the meal. 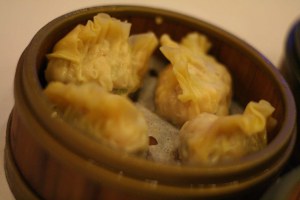 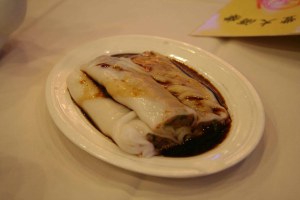 These seemed to be thick rice noodles filled with beef wrapped like burritos, then covered with something like soy sauce. Very delicious, but also very floppy and therefore incredibly difficult to eat with chopsticks. 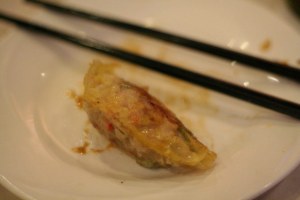 These dumplings were fried – very delicious! 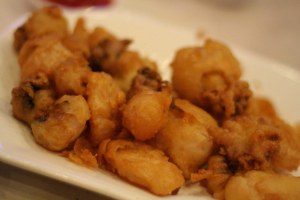 Amazing fried calamari. We also had a fried pork dish that was our least favorite, mainly because it still had the bones in it. 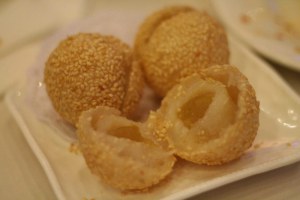 The one dessert dish we tried: a small fried dough ball with something like almond paste in the middle. Barely sweetened, and offset by the toasty sesame seeds on the outside. 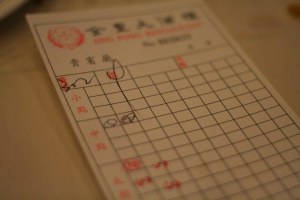 Our bill. When we selected an item from one of the carts, the woman pushing the cart would mark this bill on our table. We think that each category is a different price point, and the marks they made were their signature, which meant they maybe received some sort of commission on each dish. Which, of course, explains the somewhat aggressive service approach. Oh, and the total for our bill? $44 for four us, i.e. $11 a person. Amazing!

SERVICE: Service was good, although overwhelming, especially for the first time visitor. We were surrounded by carts before we even sat down, and most of the women only spoke a few words of English, so we couldn’t get an explanation of what was happening at first. My advice: just go with the flow. 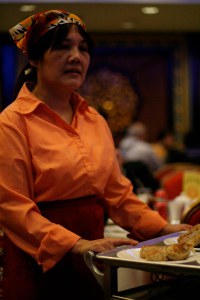 At one point we tried asking one of the woman what was in a particular dish. She motioned that she couldn’t explain, and called a manager over. He rushed over, she asked him the question, and he held up a finger as if to say, “Hold on one second.” And then he disappeared, never to return. Oh well. It didn’t diminish the experience.

OVERALL: This proved to be one of the craziest, tastiest, and most memorable experiences of our trip. As we strolled back out onto the street afterward, we couldn’t believe what had just happened, and so quickly! The rush of sensations: sounds of busy servers and customers, the smells of all the food, the bright lights and massive size of the dining room… all of these were almost overwhelming, but we plunged in and ended up having a good time. Learn from our experience, and be sure to try it yourself – either at Jing Fong or somewhere else – if you’re in New York.

OTHER LINKS:
Dim sum on Wikipedia