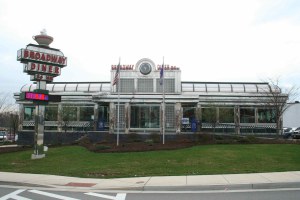 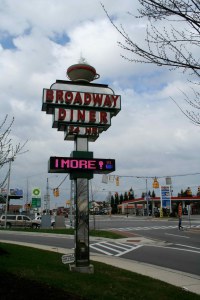 IMPRESSIONS: Broadway Diner marked our first breakfast stop during a trip to Baltimore. We found ourselves on the trail of Guy Fieri from Diners, Drive-Ins, & Dives, visiting three of his stops in the Baltimore area. Even without Guy’s visit, however, the Broadway Diner seems to be a Baltimore institution. 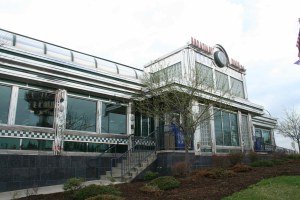 You can spot the diner from a mile away, with the shiny chrome building, glimmering glass, neon signs, and rounded corners. It’s probably the biggest diner I’ve ever seen. It stands up on a little hill on a busy street, close to the highway, like a monument to the American diner.

“You know you want to eat here!” 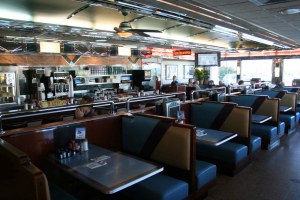 Inside it’s just as huge. A small entryway puts you at the junction of two separate dining rooms. To the right (pictured above) the diner is a little more traditional, with the big counter and rows of booths. On the left is another large room, looking much the same but with more flexible seating and movable tables.

ATMOSPHERE: We must have picked a quiet morning, because there were plenty of tables open. Which is a plus when seating six adults and two children. They put us on the left side, where they could pull a couple tables together. I can’t imagine how noisy this place could be if it were filled with customers! 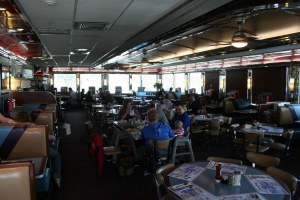 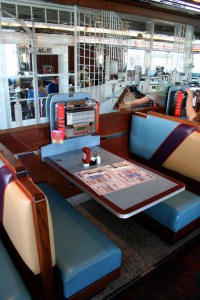 The decor screamed classic diner. All of the booths looked like this: mirrored walls, vinyl seats, mini jukeboxes at each table. You can just picture the milkshakes and cast of Happy Days there… 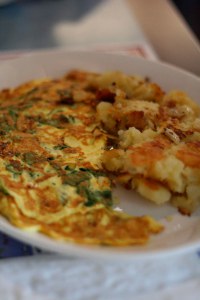 FOOD: Broadway Diner boasts a pretty huge menu on the breakfast side: tons of omelets (Greek, lox, Philly cream cheese), pancakes/French toast/waffles, simple breakfast standards w/eggs and meat, bagels, cereals, burritos, and more. A big menu to fit a big location. Our server told us the waffles were the house specialty (although none of us ordered one!). And they’ve got a number of fun items thrown in amongst the traditionals: pigs in a blanket (sausage wrapped in pancakes), scrapple omelets, homemade blintzes. 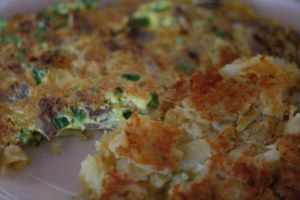 Our sister-in-law tried the fresh spinach omelet and really liked it. Loaded with colorful vegetables, served with a side of potatoes or grits. 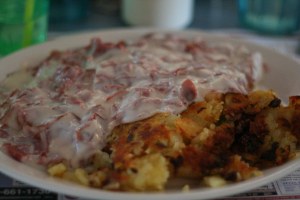 My wife had the creamed chipped beef, which was very good. I liked the thin-sliced beef – it gave the dish a creamier texture. 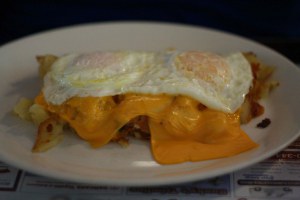 My brother-in-law and cousin (please note: they’re two separate people) ordered the hobo banquet. Broadway Diner claims to have invented the dish: it’s a skillet of potatoes covered with American cheese and two eggs. I love the name. I don’t love American cheese – I find it kinda gross. And there are so many good cheeses out there! It’s like drinking Budweiser when you’ve got a perfectly good craft beer sitting nearby. (Can I get an “Amen?”) 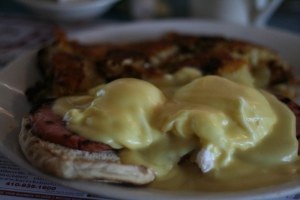 I chose what is rapidly becoming a breakfast favorite for me: the eggs benedict. This was a fine example: thick grilled Canadian bacon, eggs poached just right, with a tasty hollandaise. The sauce could have used a little more punch (where’s the paprika?), and the bacon, while delicious, was a little too tough. You should be able to cut through eggs benny with the side of your fork. But the portions were huge, and coupled with a mug of some weak diner brown coffee, it made for a good breakfast. 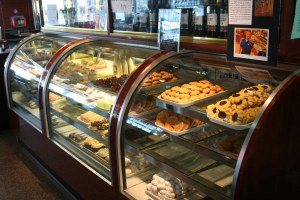 SERVICE: Our server was very good. She told us right away that she was new, and while it showed, she still handled our large group quickly and graciously.

OVERALL: I can see why Broadway Diner is an institution, and this from only trying the breakfast. With such a huge location, diverse menu, and round-the-clock open hours, it’s an easy place to go for a good, solid meal.