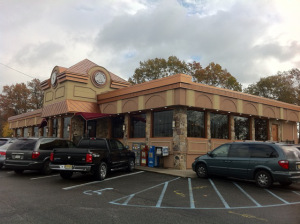 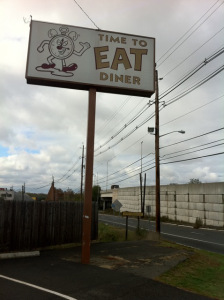 IMPRESSIONS: In northern New Jersey for a family wedding, we needed some sustenance. One part of being the resident food blogger in the group is that everyone will turn to you when looking for breakfast, even if you’ve never been to the city before. Fortunately, my wife and I triangulated reviews between Yelp, Urbanspoon, and Google and came up with the Time To Eat Diner. 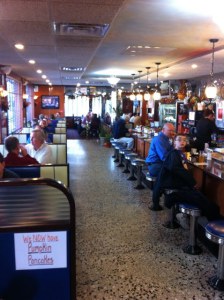 Time To Eat is like many of those roadside diners that capture some sense of the small diner, while still being built out enough to accommodate large groups. It’s the diner + the dining room. You can have your sit-at-the-counter, flashy-chrome diner experience, or you can have the plusher big family dining room experience. 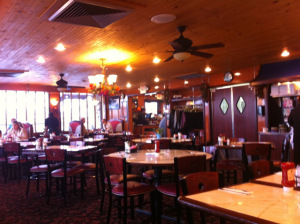 ATMOSPHERE: Kudos to the Time to Eat crew for being able to accommodate such a large group. They stacked together a bunch of tables in the back of the dining room and gave us a harried server. 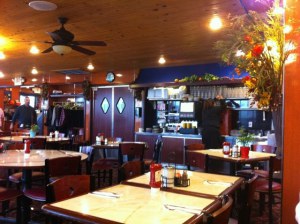 The atmosphere is just what you would expect. Small booths, kitschy 50’s memorabilia, and that just-off-the-highway feeling. It makes me think of the Broadway Diner in Baltimore. 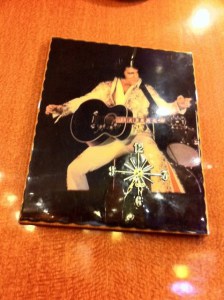 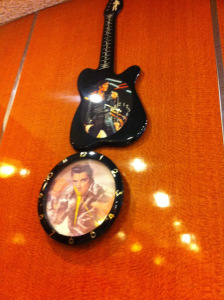 And Elvis guitars and Elvis clocks. 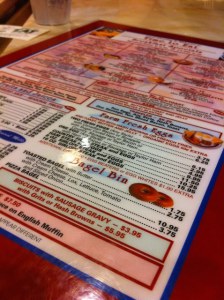 FOOD: I get a little nervous when I see menus like Time To Eat’s. They’re like a short novel. Pages and pages of items. It gets hard to sift through, even if breakfast only takes up three of those pages. I think of this as the Cheesecake Factory syndrome, in which the menu is so huge that you know there’s no way all that food didn’t just come out of a freezer. Because we had a big group, we ordered a big variety of things. Some hit and miss. 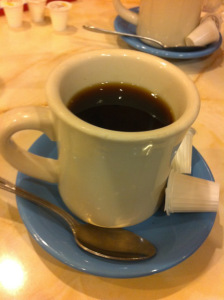 First off, coffee. Very good. A step up from the standard diner coffee. I liked the big mugs, and the individual serving plates with spoon and creamer. Also scoring points for the diner: colorful dishware. I like seeing that. 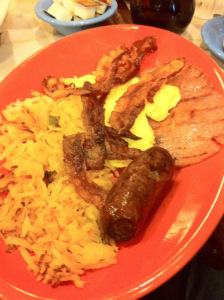 I tried the Sampler: two eggs, hash browns, bacon, sausage, pork roll, toast. Eggs were fine. The hash browns were okay, a little on the mushy side. Bacon, fine. Sausage, very good. Reminded me of English sausage: a little more plump. I ordered this dish partially out of curiosity over the pork roll. I’ve never encountered that on a menu before, nor have I seen taylor ham (also on the menu). I asked our server to clarify, and she said they are basically the same thing, and that they’re both essentially country ham. So: pork roll = taylor ham = country ham = salted ham. 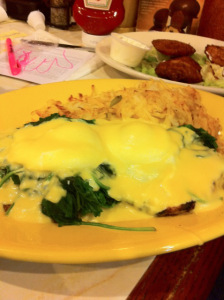 My wife ordered the Eggs Benedict Florentine. It came with a side of hash browns. It was okay, but there was definitely a funny taste to the spinach and the hash browns. Almost metallic. A little off-putting. 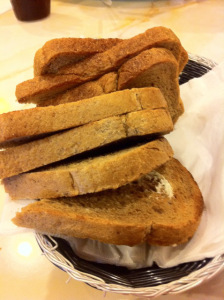 Everyone’s toast came together in a basket. I find this charming because it reminds me of toast racks typical of an English breakfast. But it also confuses me, because I didn’t know whose toast was whose. 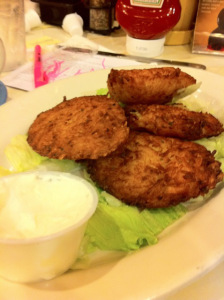 Also ordered a side of Potato Pancakes with sour cream. These were pretty good: crispy outside, warm inside. 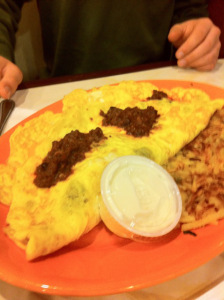 Er… an omelet. I forget which one. Like I said, a lot of dishes… 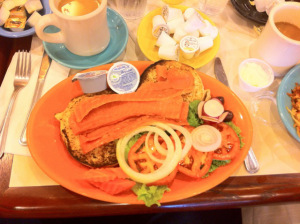 The Toasted Bagel with Lox. This was a definite hit. 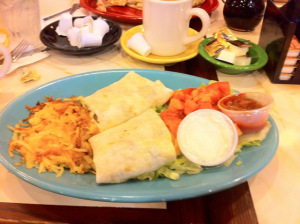 Breakfast burrito with all the accoutrement. 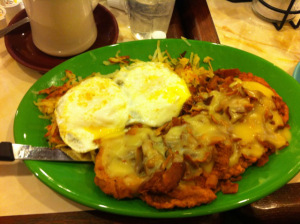 Country Fried Steak & Two Eggs. I had a taste of this, and it was quite good. I wish I had ordered this instead of the Sampler. I loves me some country fried steak. 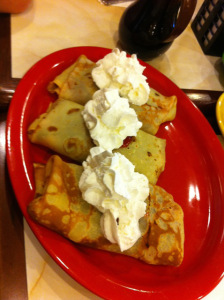 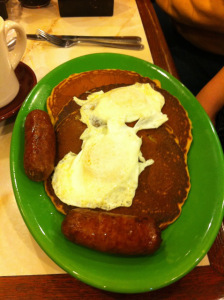 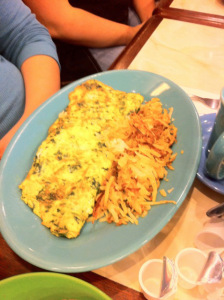 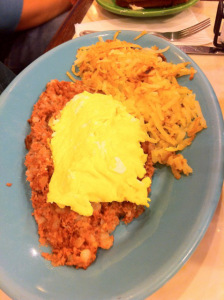 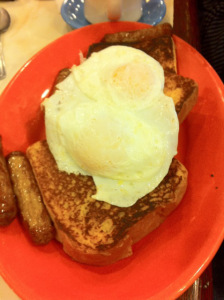 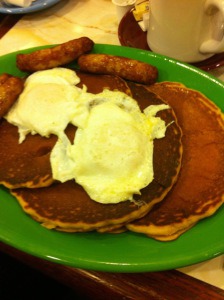 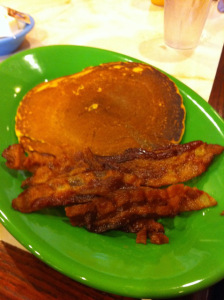 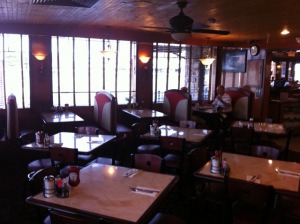 SERVICE: Our server did a very good job, considering she had such a large group all to herself. She seemed pretty harried, but all told, the food came quickly and she got all of the orders exactly right. 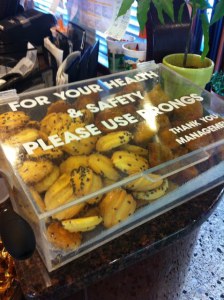 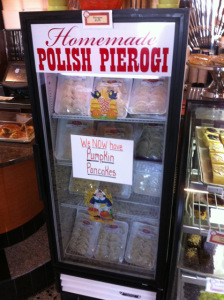 OVERALL: I don’t know when I’ll next be in Northern Jersey. If I am, I don’t know if I’d stop at Time To Eat again. I think it’s worth at least one visit: the location is interesting (although a little hard to get to if you don’t know the local highways), the service is great, and I guess there’s enough variety on the menu that you’re bound to find something you’ll like. But I think the so-so dishes, especially the eggs benedict florentine, left me feeling like one visit is enough for me. 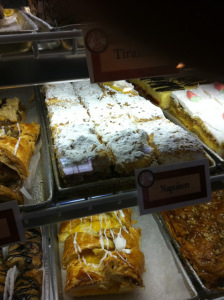