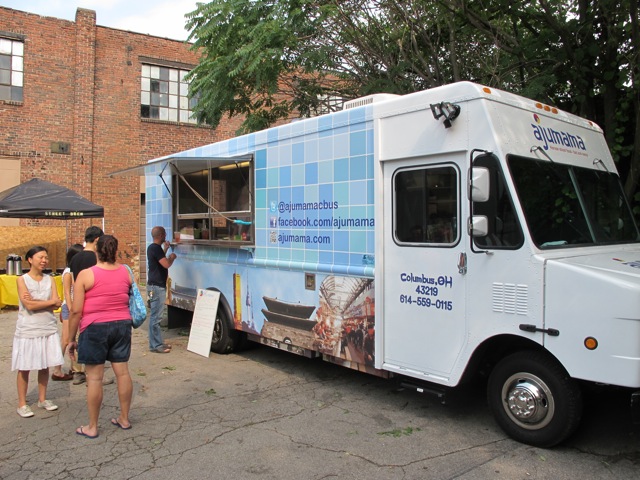 This past weekend we got to try breakfast at Dinin’ Hall! A couple of food trucks whipped up special menus just for a book-signing, and a crowd of about 60 or 70 people joined us! Ajumama set up with a very special and delicious menu. 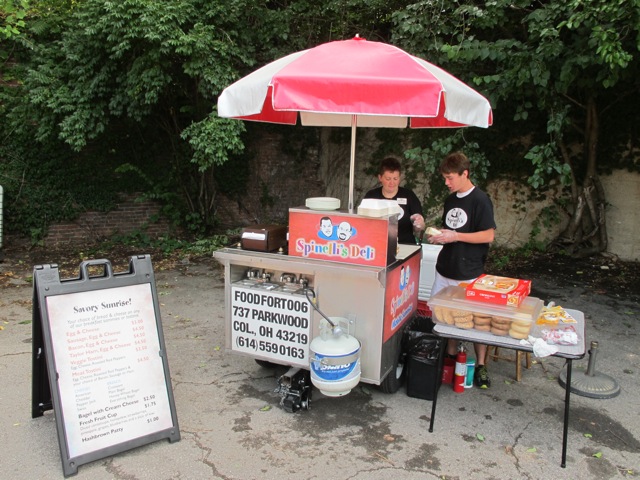 And the cart from Spinelli’s Deli was there serving up breakfast sandwiches! 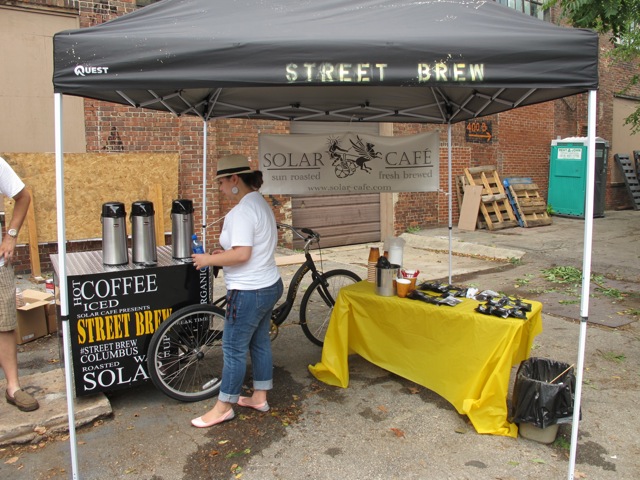 The folks from the new Solar Cafe made their first appearance in Columbus, giving away samples of their coffee. Solar Cafe is apparently a national “chain” of coffee shops. The coffee is roasted by Solar Roast Coffee, at a facility in Pueblo, Colorado, actually using solar power. And not just electricity converted from solar cells, but focused sunbeams used to superheat air which is circulated around coffee beans. 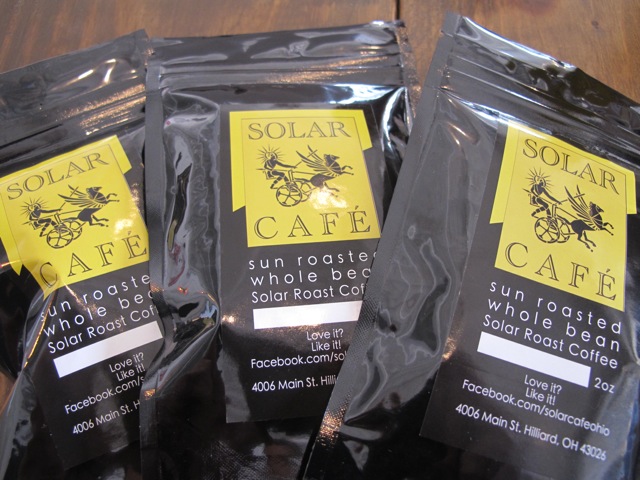 Solar Cafe has a trike, from which they’ll be serving coffee around town, and they’re opening a cafe in Old Hilliard in July. 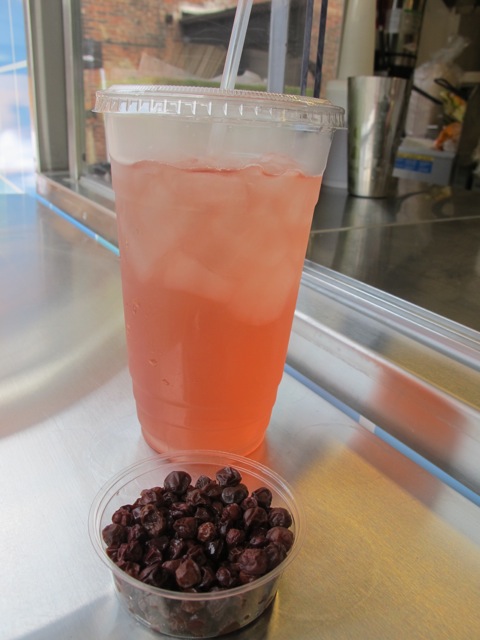 It’s been in the 90’s and muggy here in Ohio (plus a freak windstorm on Friday night), so a tall class of omija tea from Ajumama was the perfect start. The tea is made from the “five flavor berry” (pictured here), so called because they’re salty, sweet, bitter, sour, and savory all at once. Makes for a very refreshing summer drink. 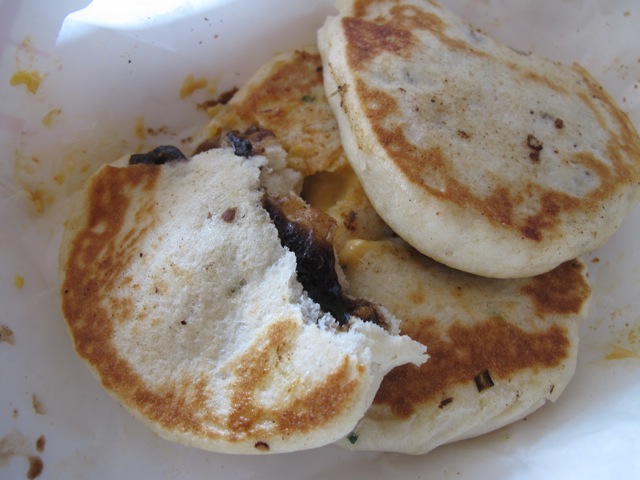 For breakfast, Laura and her crew from Ajumama served some unique versions of hodduk. A regular hodduk is a small cake filled with brown sugar, cinnamon, and walnuts. It’s a rich, sweet little snack. In addition to the standard version, Laura made a budae or Army hodduk, which used American cheese, spam, and kimchi. And then she did a bacon brown sugar version. All three = delicious. 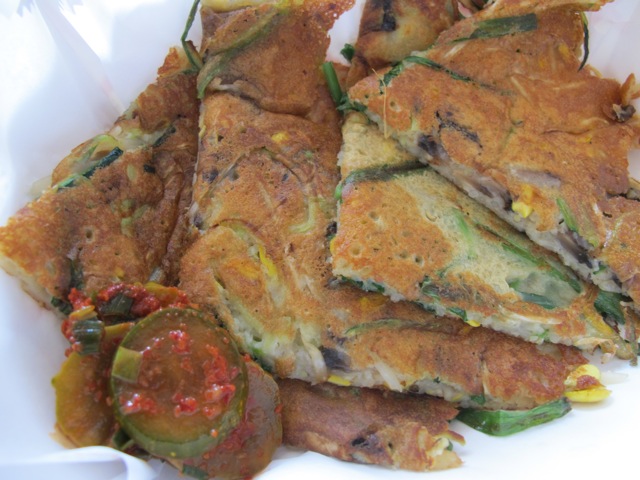 They also served a veggie pajeon, which is a thin pancake filled with sprouts, shallots, zucchini, mushrooms, and garlic. My wife and I were big fans of this one. 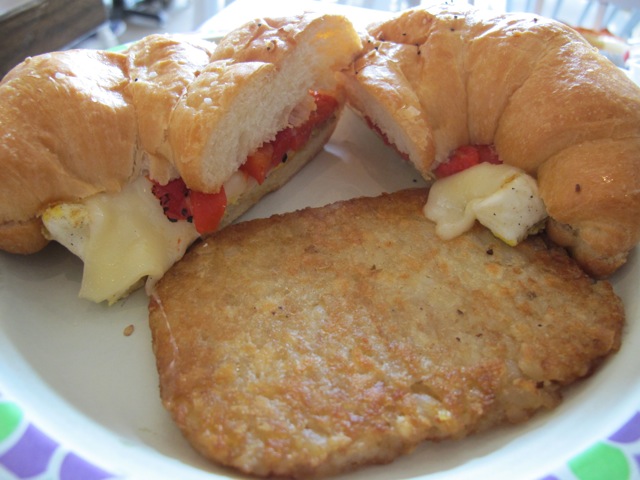 We also grabbed something more traditional from the Spinelli’s cart, which was a nice complement to the Korean street food breakfast. Here’s a veggie crostini on a croissant, with a hash brown patty. The crostini is set apart from their regular breakfast sandwiches by the addition of roasted red peppers. I can never get enough of those. 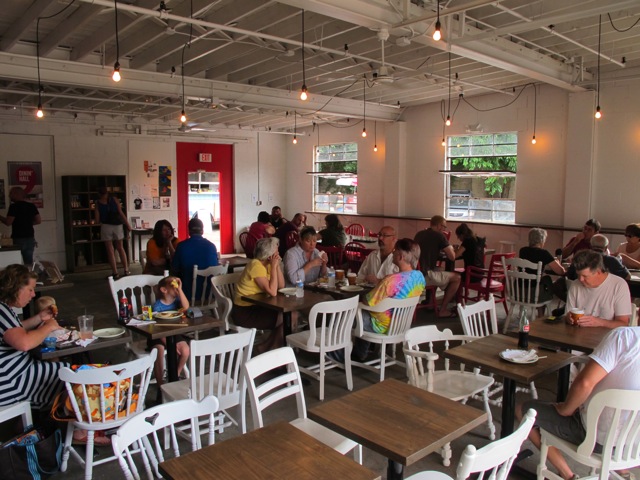 Overall, a great event! It seemed like a bunch of people got to try Dinin’ Hall, who aren’t normally available to come by during the weekday hours. Thanks to everyone who came. Perhaps we can make it a regular thing?