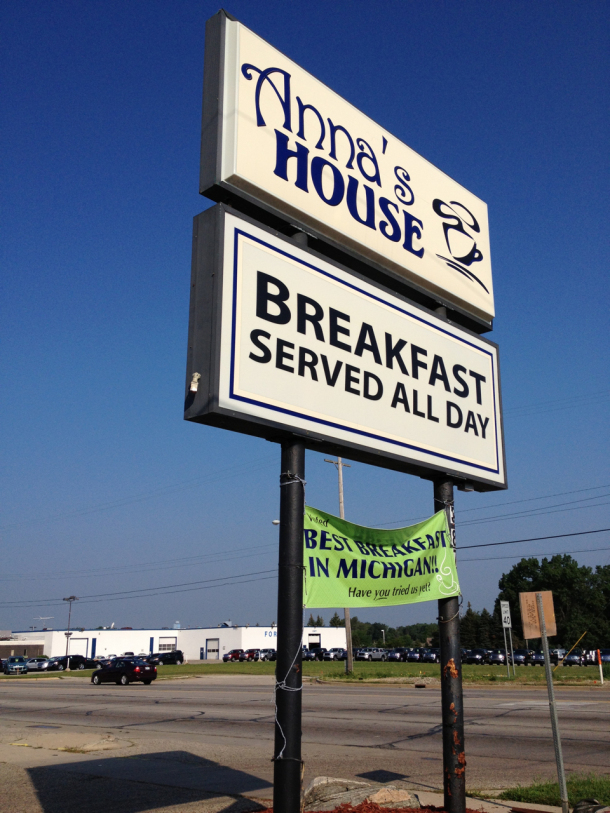 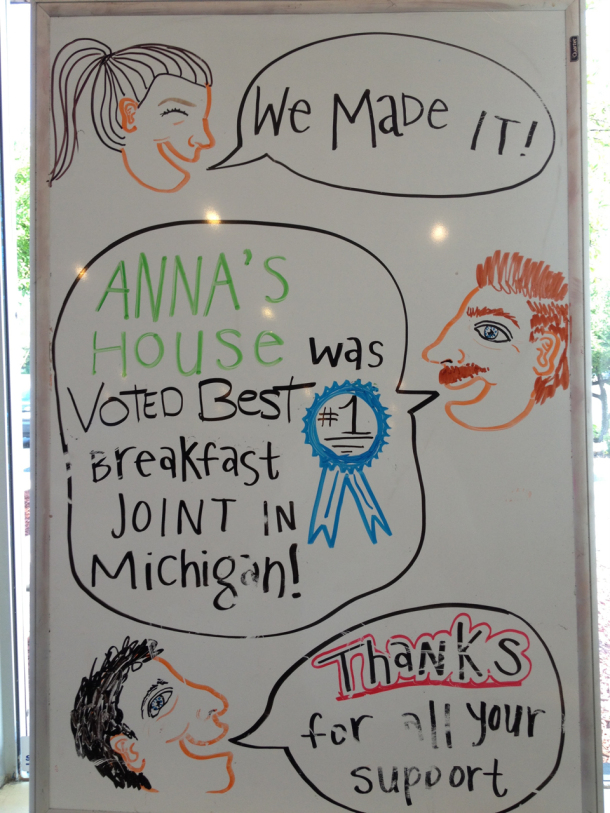 Even though I’m a native of Grand Rapids, even though I fervently follow the breakfast scene there, even though I follow breakfast just about anywhere, somehow I had never heard of Anna’s House until it was announced that they were voted the best breakfast joint in the state of Michigan. After I got over the shock that my neighborhood favorite Real Food Cafe didn’t win the honor, I was still happy to have something new to explore, and to know that the Grand Rapids breakfast scene is getting its fair share of attention. Of course, voting polls like this always bug me, and you can always get nit-picky about one person’s opinion. But in some ways I feel bad for Anna’s. Whenever something is declared the #1 anything, you’re setting up people’s expectations unnecessarily high. All this is to say that we were still excited and slightly apprehensive to finally check out Anna’s on our recent trip up to GR. 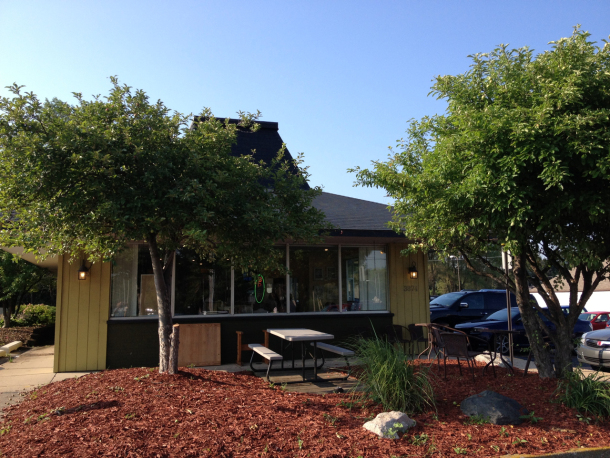 Anna’s can be found in northeast Grand Rapids on Plainfield Avenue, in a building that must have once been a Pizza Hut or some other fast food restaurant. This is away from burgeoning districts like downtown, Eastown, or Wealthy Street, but it’s good to spread the breakfast love to all four corners of the city. 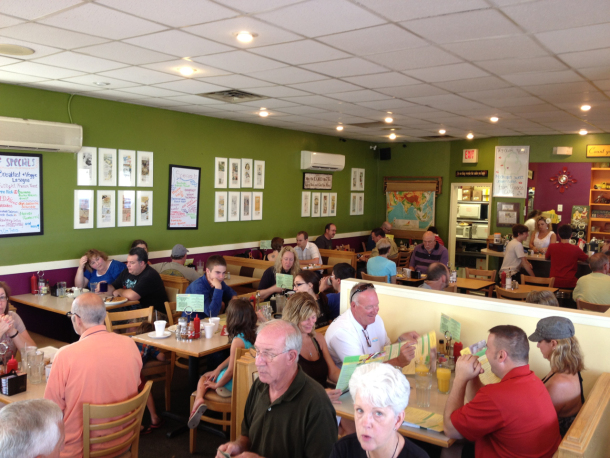 Fortunately, the space has been thoroughly redecorated so that nothing remains of the sterilized corporate atmosphere. 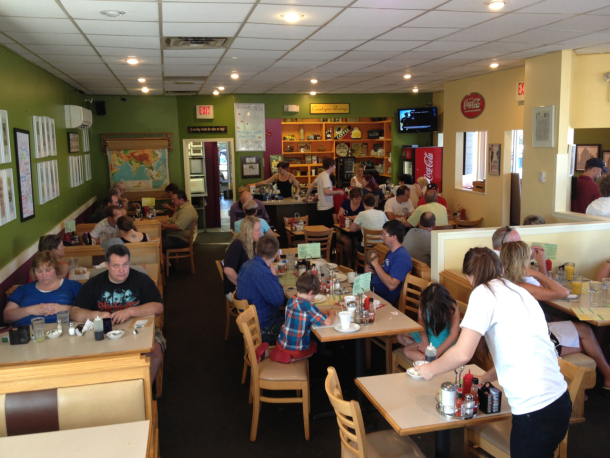 Instead, the interior is colorful and eclectic, with lots of artwork, multiple dry erase menu boards, and plenty of tables and booths. We hit the place up right around 8 am, when the sign inside the door still said “Please seat yourself.” By the time we left, the waiting area was packed full of people. Another double-edged sword of winning awards: you’re full all the time, and you’re full all the time. 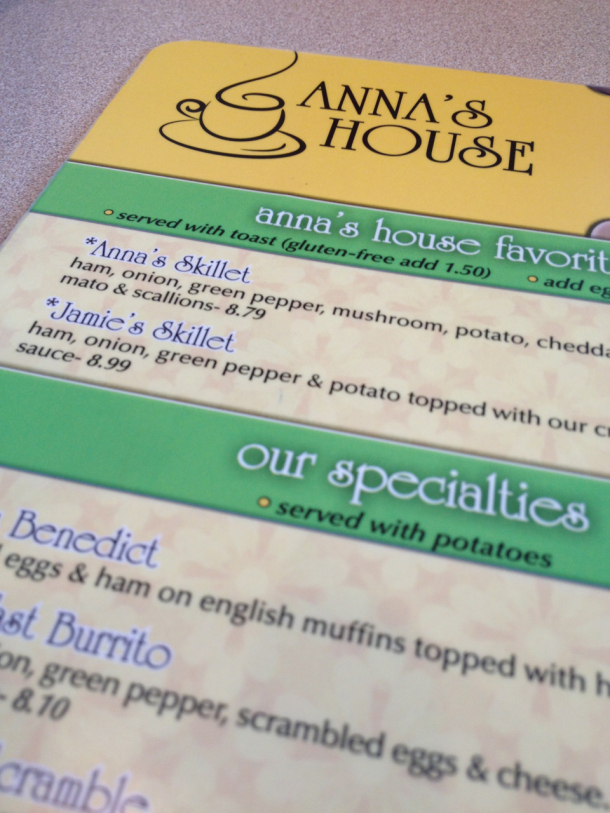 Anna’s has a wide-ranging menu, covering ground that includes skillets, eggs benedict, burritos, sandwiches, omelets, pancakes, quiche, and nearly everything in between. 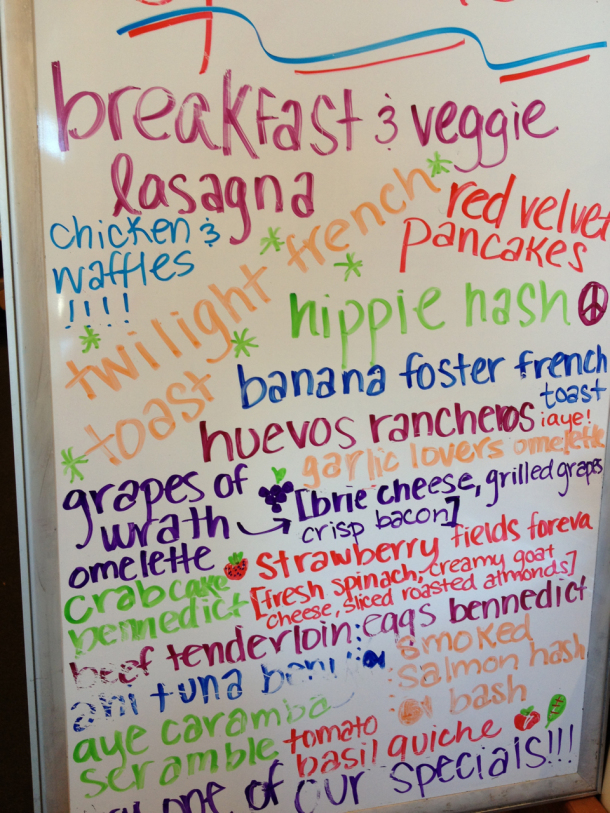 Of course, the standard menu barely scratches the surface. The true feature is the colorful menu board listing weekly specials. Here they’re covering more ground that includes seafood, southern specialties like chicken and waffles, French toast that’s baked overnight, a vegan hippie hash of root vegetables and sprouts, and traditional dishes with crazy combinations. This is a wonderful array of things, but this wide-ranging eclecticism starts to undermine the identity of the restaurant. 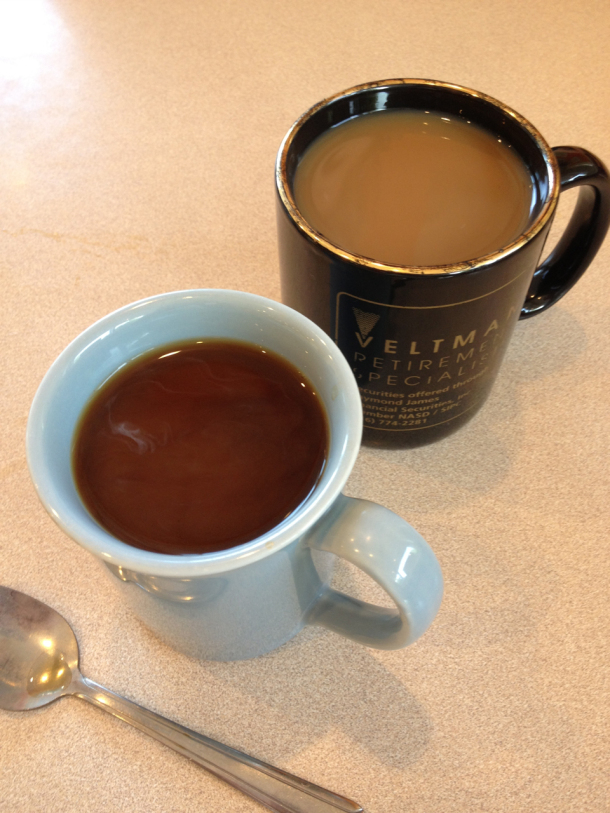 Is Anna’s trying to be a working class, third-shift go-to for breakfast grub, like you see with the mis-matched mugs and strong, hot coffee? Or is it trying to be a hippy-haven with servers with flowers in their hair and recipes that they literally dreamed up? Or is it trying to be a pastel-colored casual cafe that appeals to the old folks? There are authentic hints of each of these elements, but at times it felt like Anna’s House (there isn’t an Anna, by the way) hasn’t quite decided what to be. 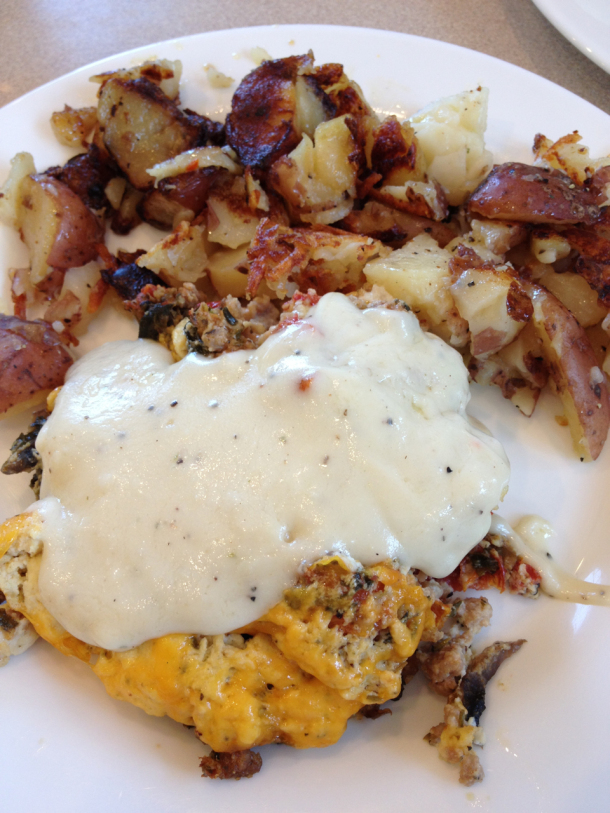 Whatever Anna’s is or is attempting to be, you can’t argue with the line of patrons out the door and some very creative breakfast dishes. For instance, I ordered the breakfast lasagna, one of their signature meals that exemplifies their creative spirit. This is the recipe that our server dreamt up overnight and began cooking. It’s an artful combination of tomatoes, mushrooms, sausage, cheese, and fresh herbs. All very flavorful, although the biggest punch is delivered by the dollop of gravy on top. It’s served with a side of well-seasoned redskin potatoes. 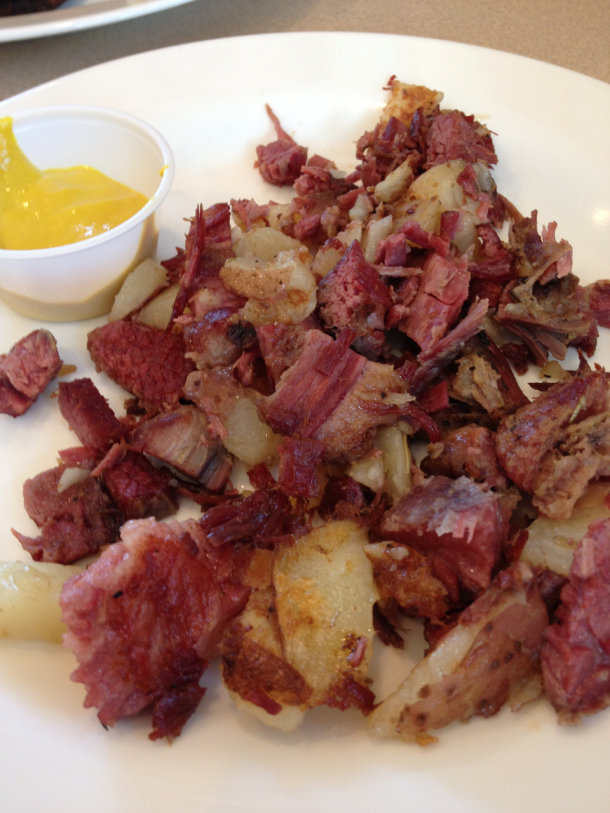 I’m a sucker for any place that makes their own corned beef hash in-house (canned stuff = blech), so we ordered it as a side. Generous pieces of tender corned beef mix well with the house potatoes, accompanied by the random plastic cup of yellow mustard. 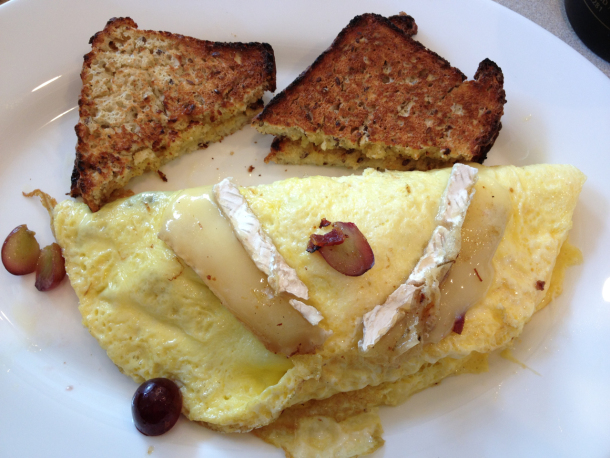 The Mrs. went for the grapes of wrath omelet special: an omelet with Brie, grapes, and bacon. Very interesting combination, although the texture of soft eggs, crispy bacon, and the Brie rinds wasn’t entirely to my liking. Served with a side of toast; I should note that Anna’s very readily does gluten free sides by request. This was also the best presented dish of the bunch. The lasagna and corned beef hash were tasty but a little slap-dash in their plating.

Is Anna’s #1 in the state? That’s impossible for me to say, really, but I can admit that my preference (at least in Grand Rapids) still lies with Real Food Cafe. Again, Anna’s offers some very creative dishes and a comfortable atmosphere, both of which merit a visit to the restaurant, but the hard-to-pin-down identity made it difficult to know exactly what to expect. Here’s hoping, though, that the #1 rating helps keep the restaurant open and the hard-working crew busy.