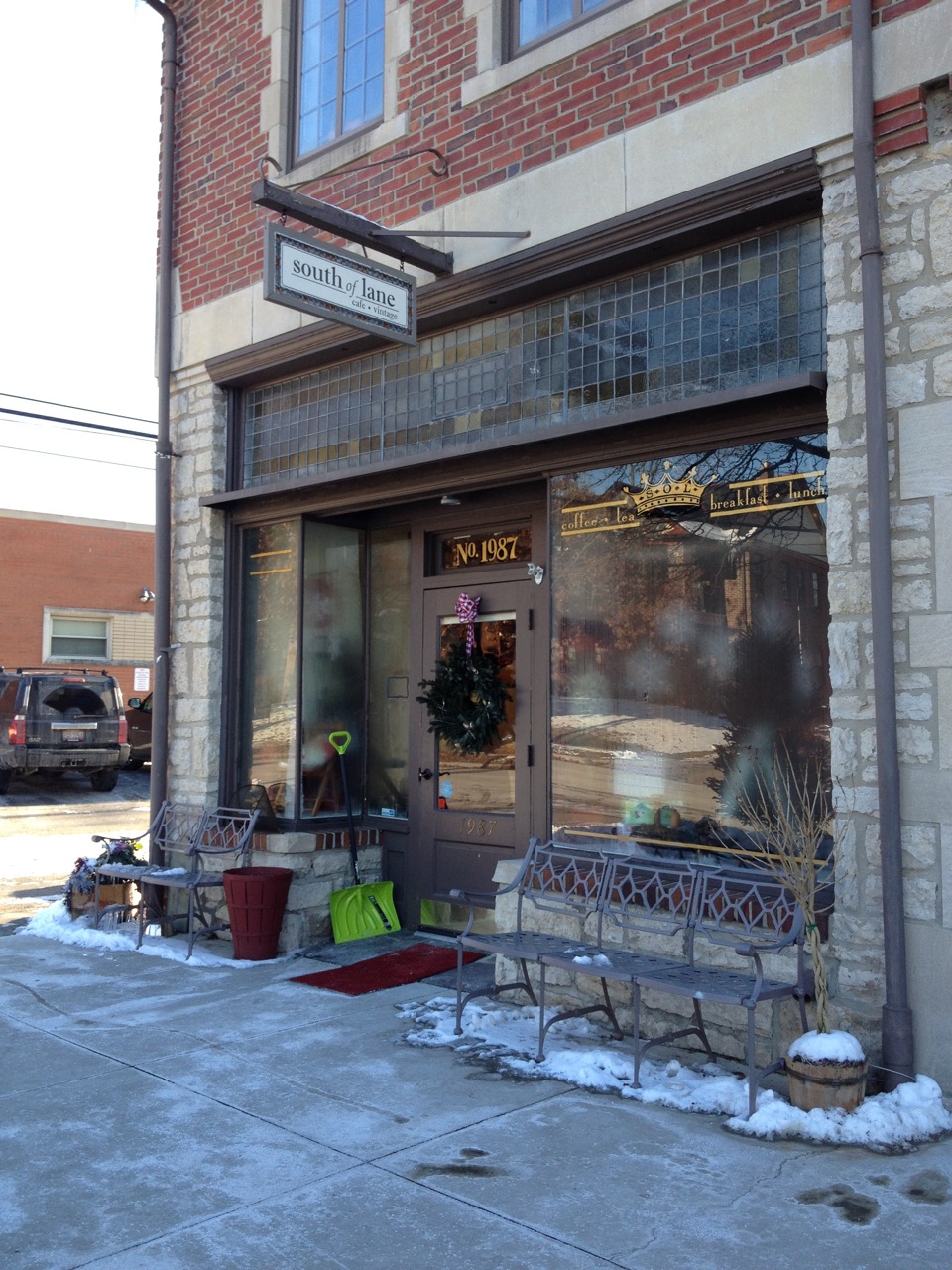 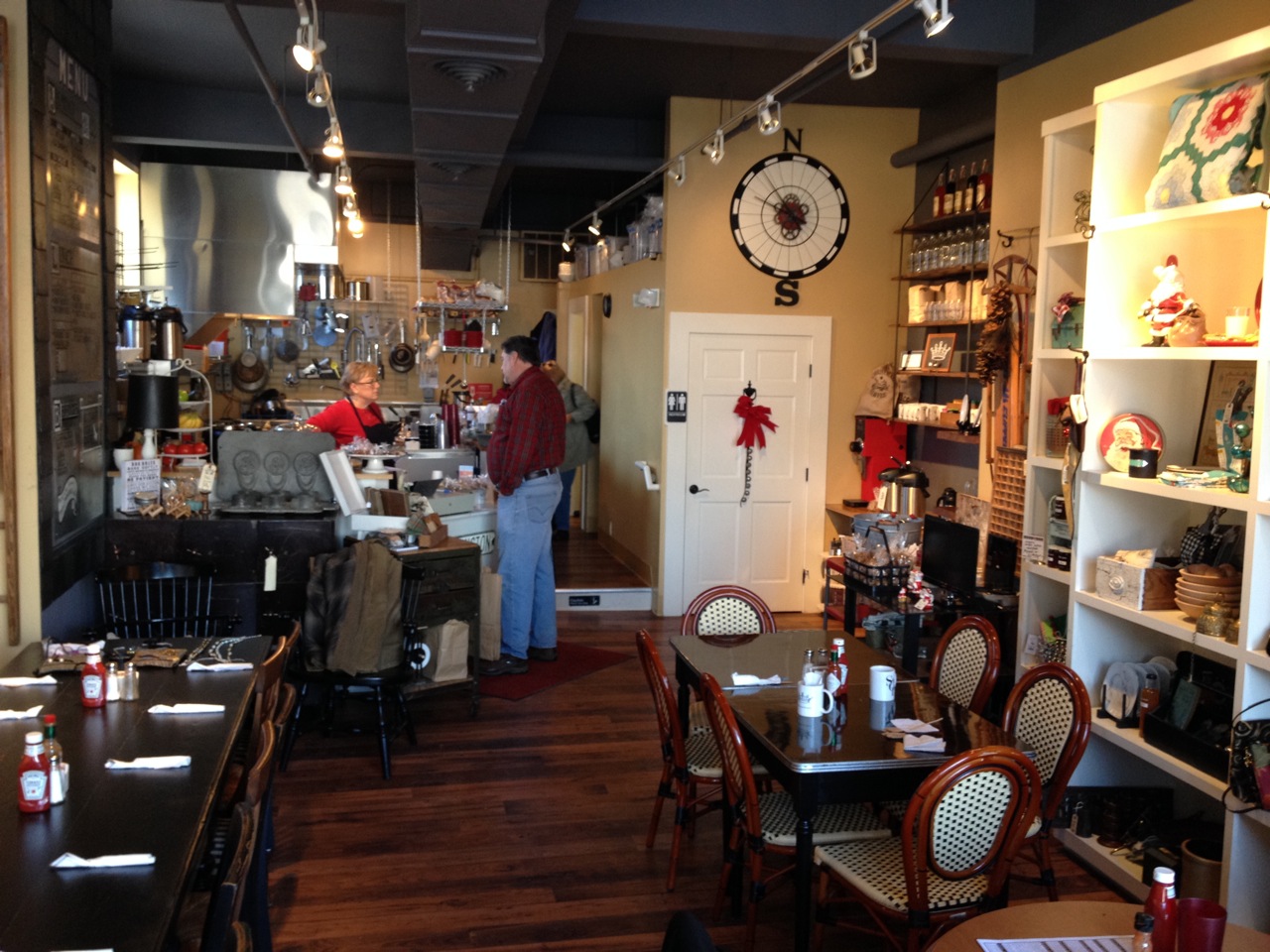 This year we’ve seen some notable new breakfast places open up, ranging from over-the-top to fancy to simple and casual. One of the newer additions opening in May is this little spot in Upper Arlington: South of Lane. There are many things about this place that scream “Upper Arlington:” the location (obviously), the clientele, the cozy cafe atmosphere. But there are some delightful little surprises, too, a sneaky little irreverent charm evidenced by the full embracing of the initials “SoL.” (Ask around if you don’t know what that stands for.) 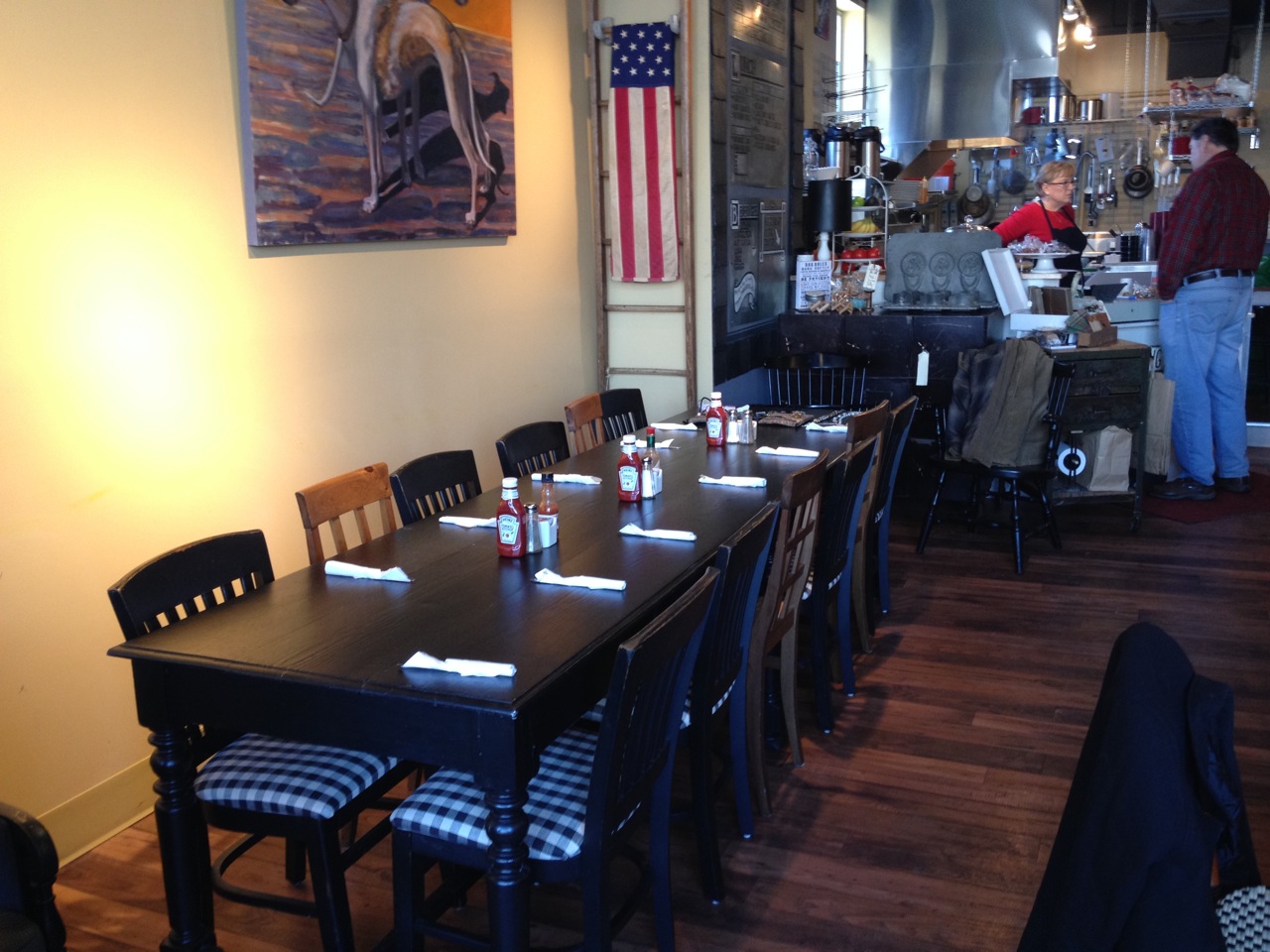 South of Lane also fills a void in the Columbus breakfast map. The greater Upper Arlington area lacks some solid local breakfasts, aside from Chef-O-Nette, La Chatelaine, and nearby spots like Cambridge Tea House (which is technically Marble Cliff), or a First Watch or Bob Evans. 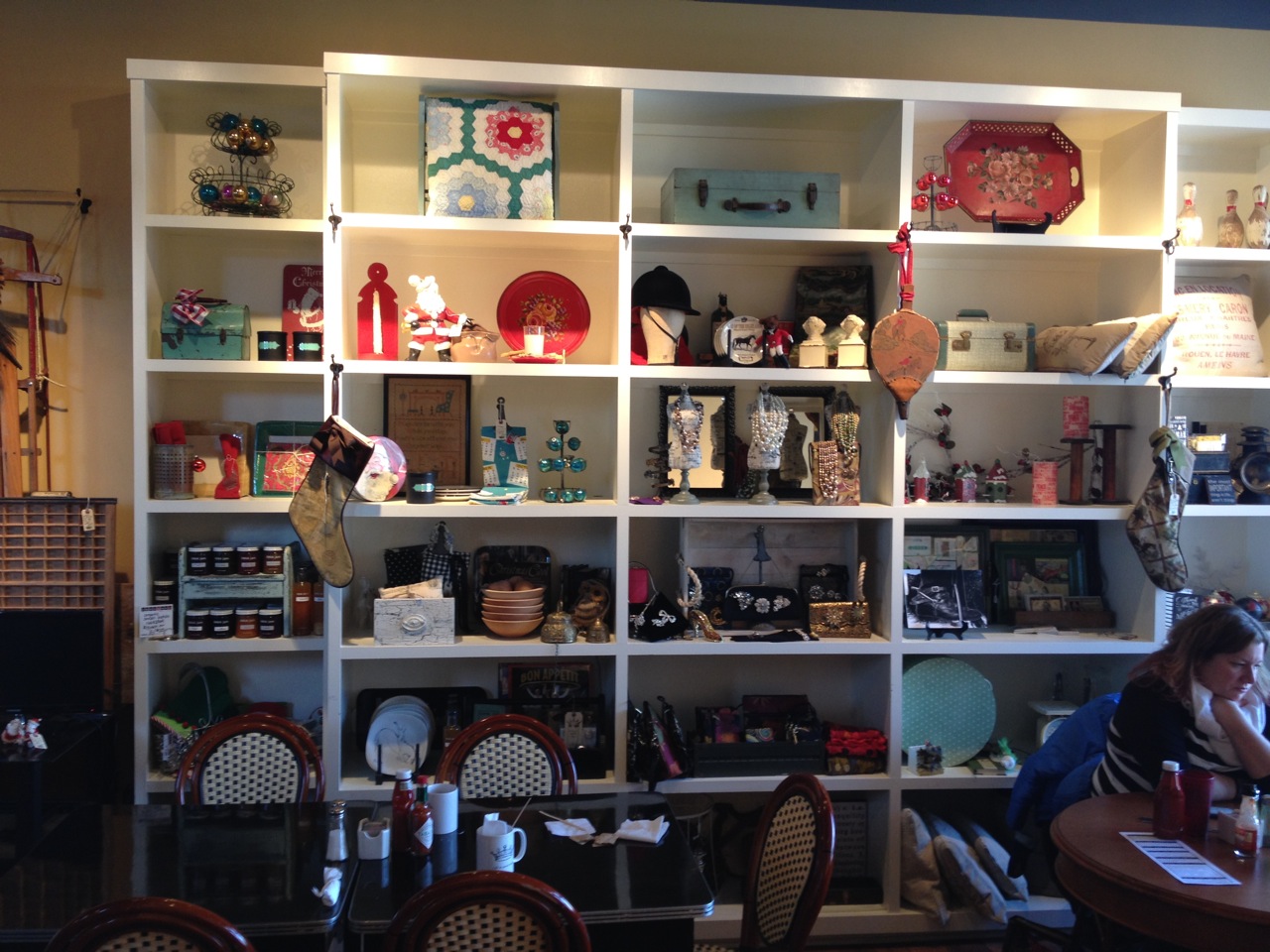 SoL is not just a breakfast and lunch cafe. It’s a full-blown vintage store, too. You can expect shelves full of jams, plates, hats, jewelry, pillows, you name it. 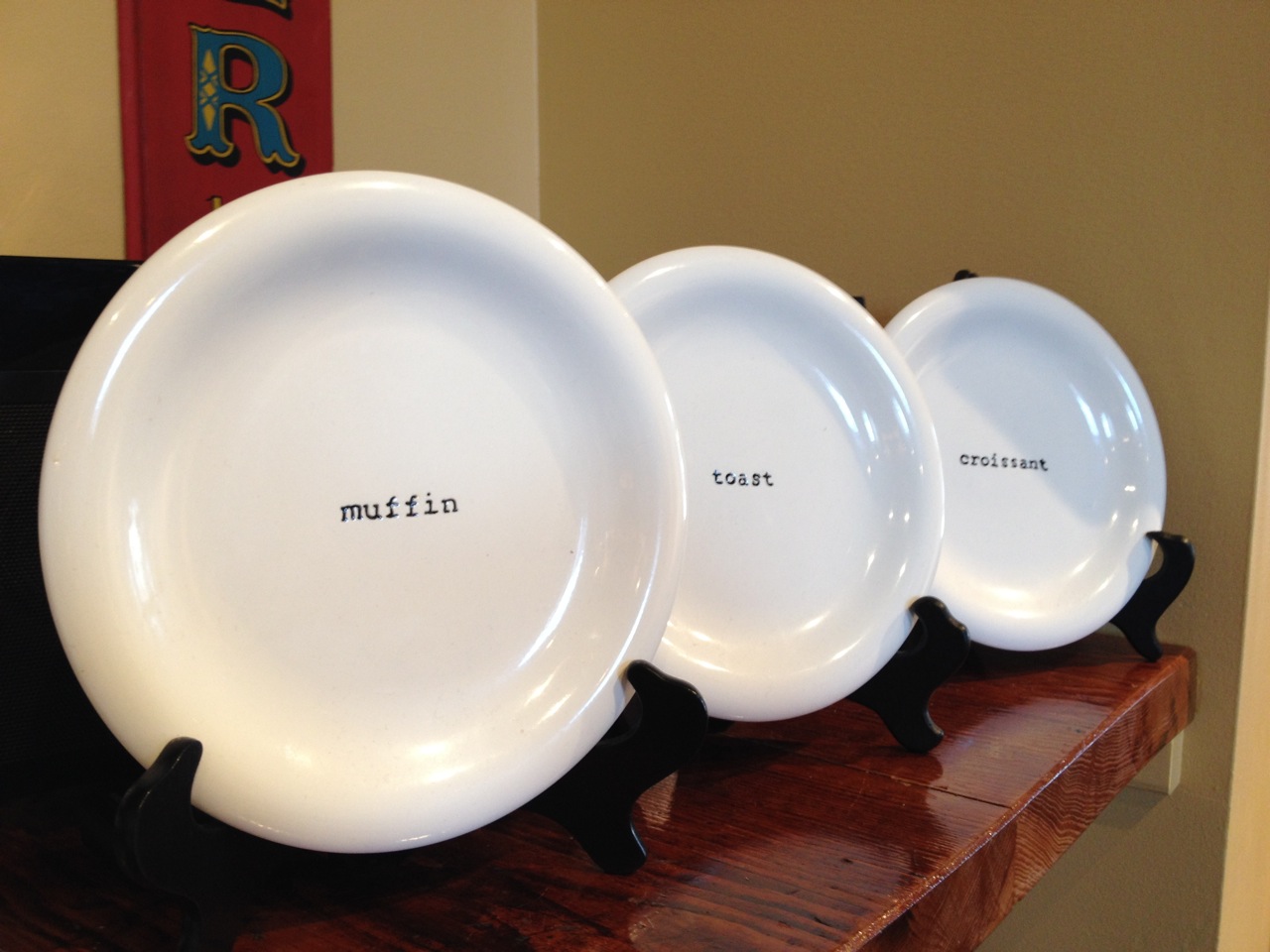 Amongst the crowded kitsch, you’ll find some fun little elements, too. 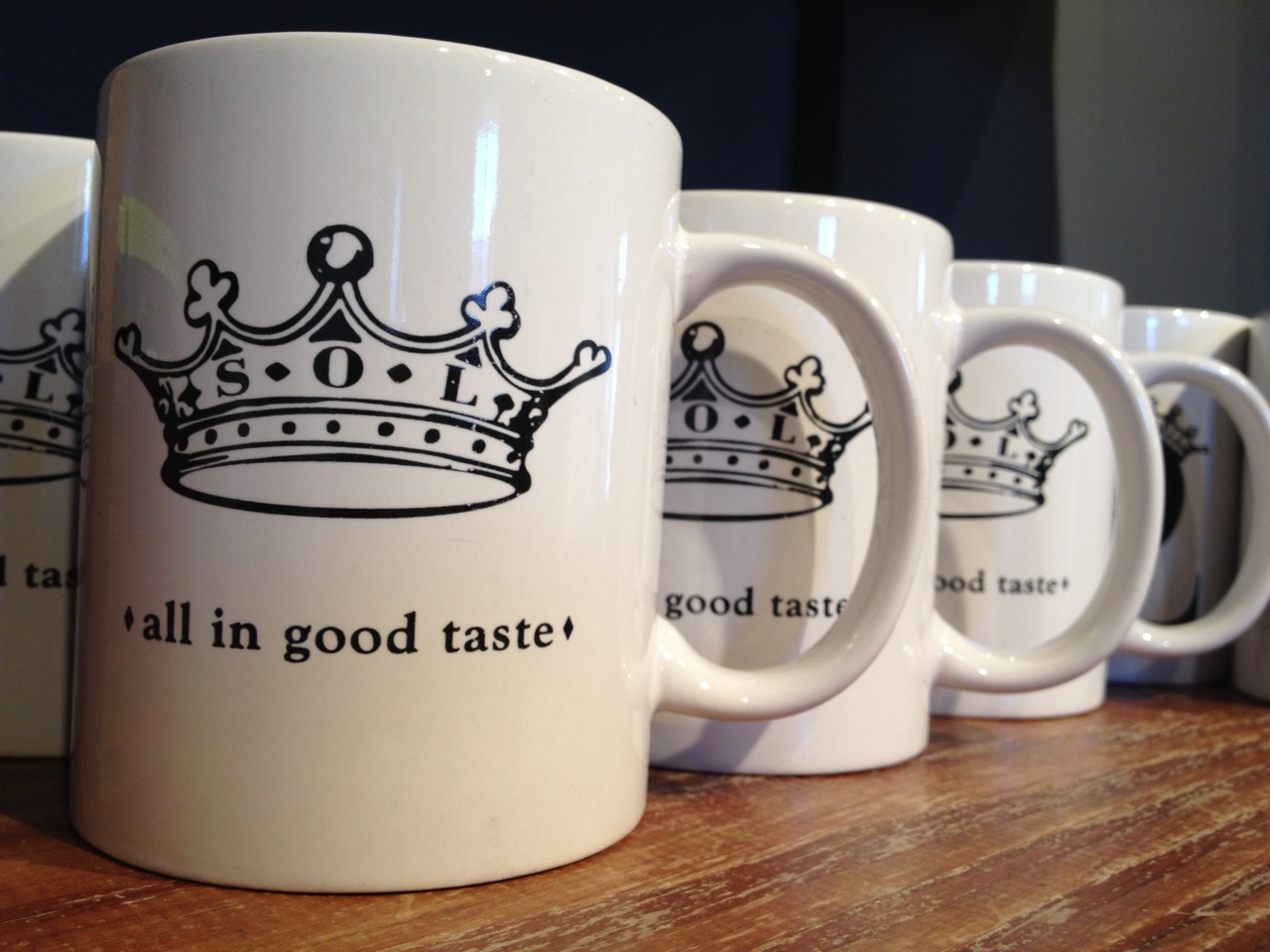 I liked the branded mugs. That shows commitment, when a breakfast spot will get its own mugs made. 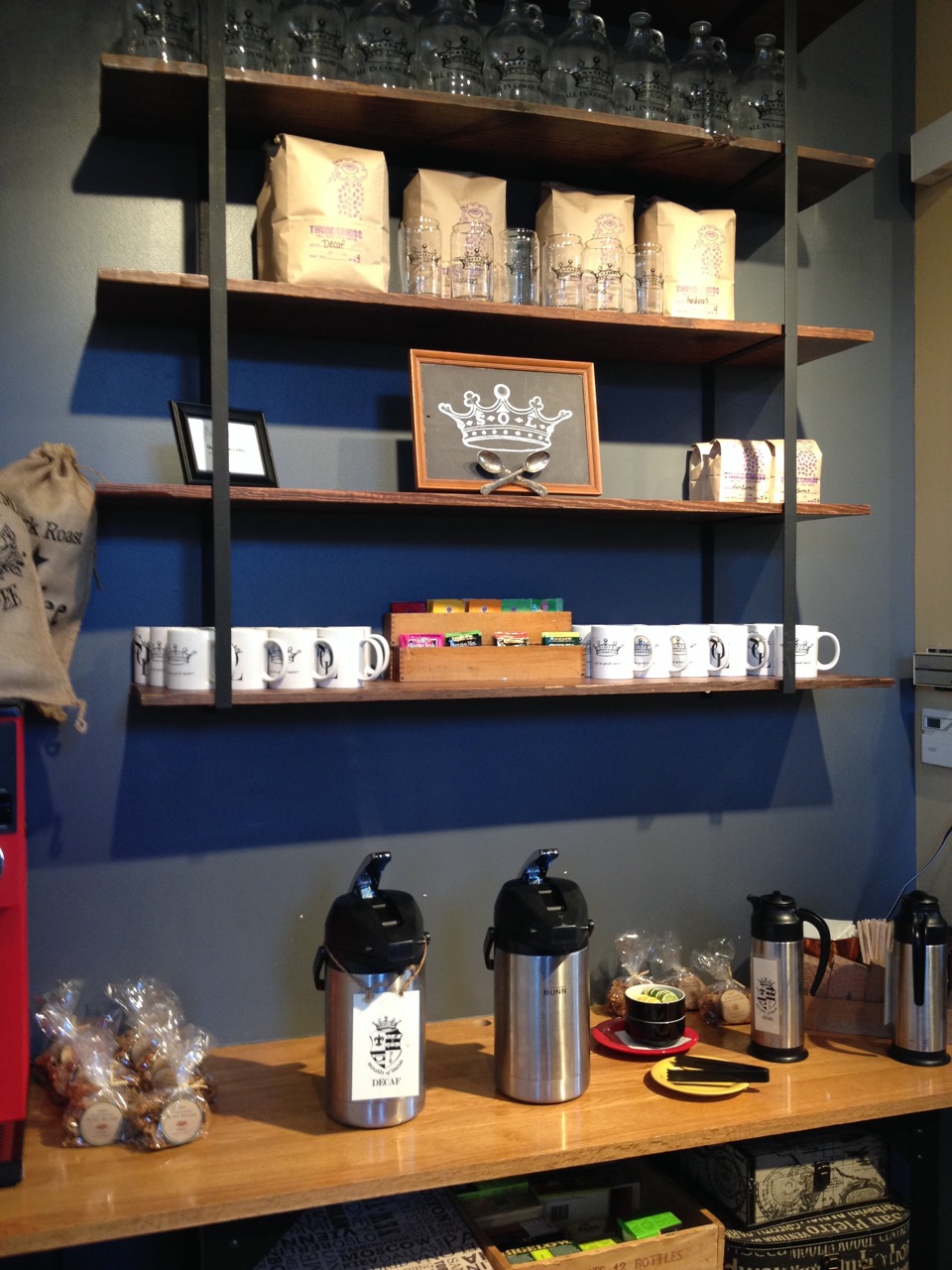 In fact, it takes a little discernment to figure out where the vintage items for sale end and where the counter or the self-serve coffee ends. 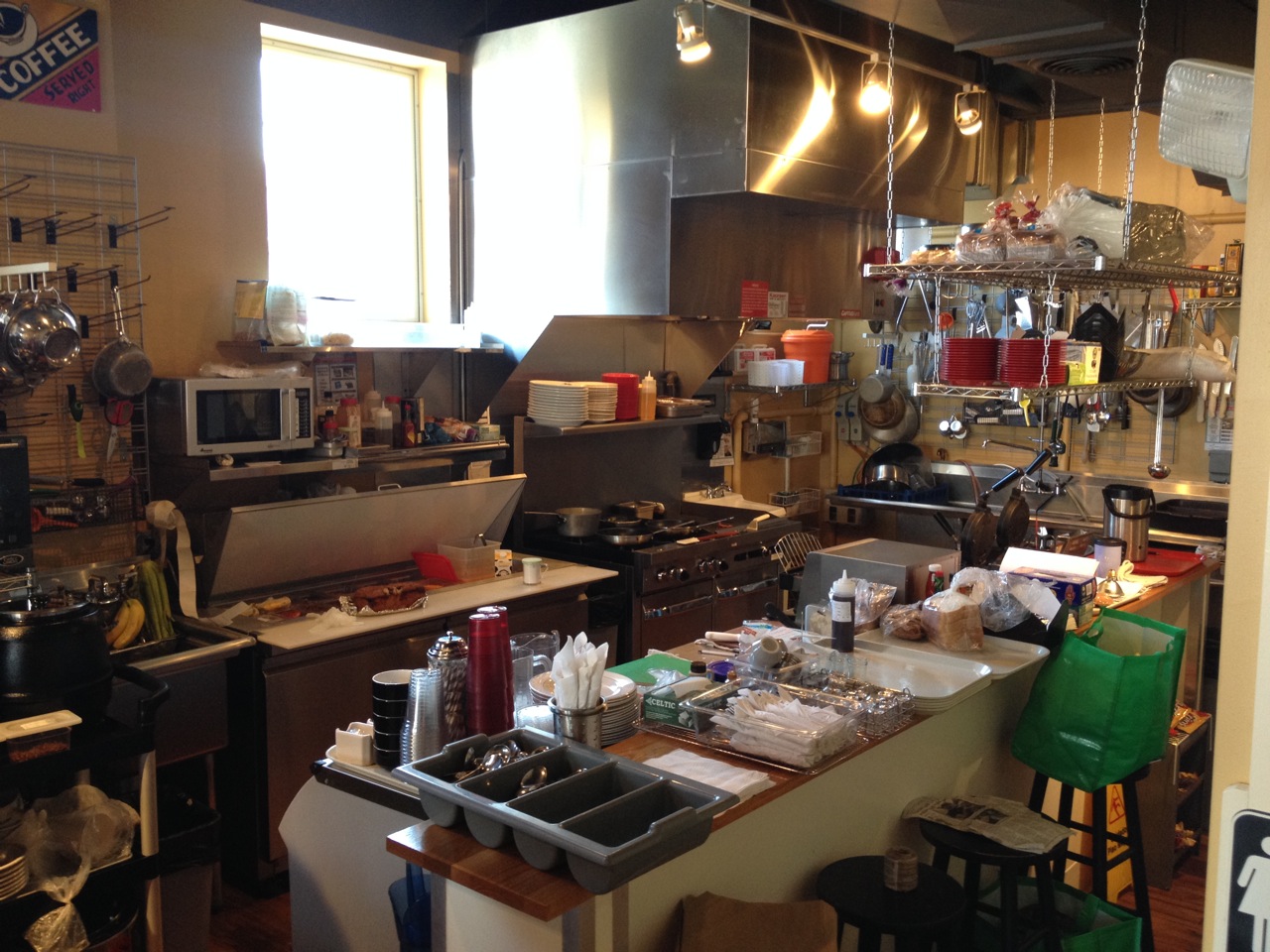 Continuing back into the space, the wooden top tables and loaded shelves transition seamlessly into the ordering counter and the open kitchen. 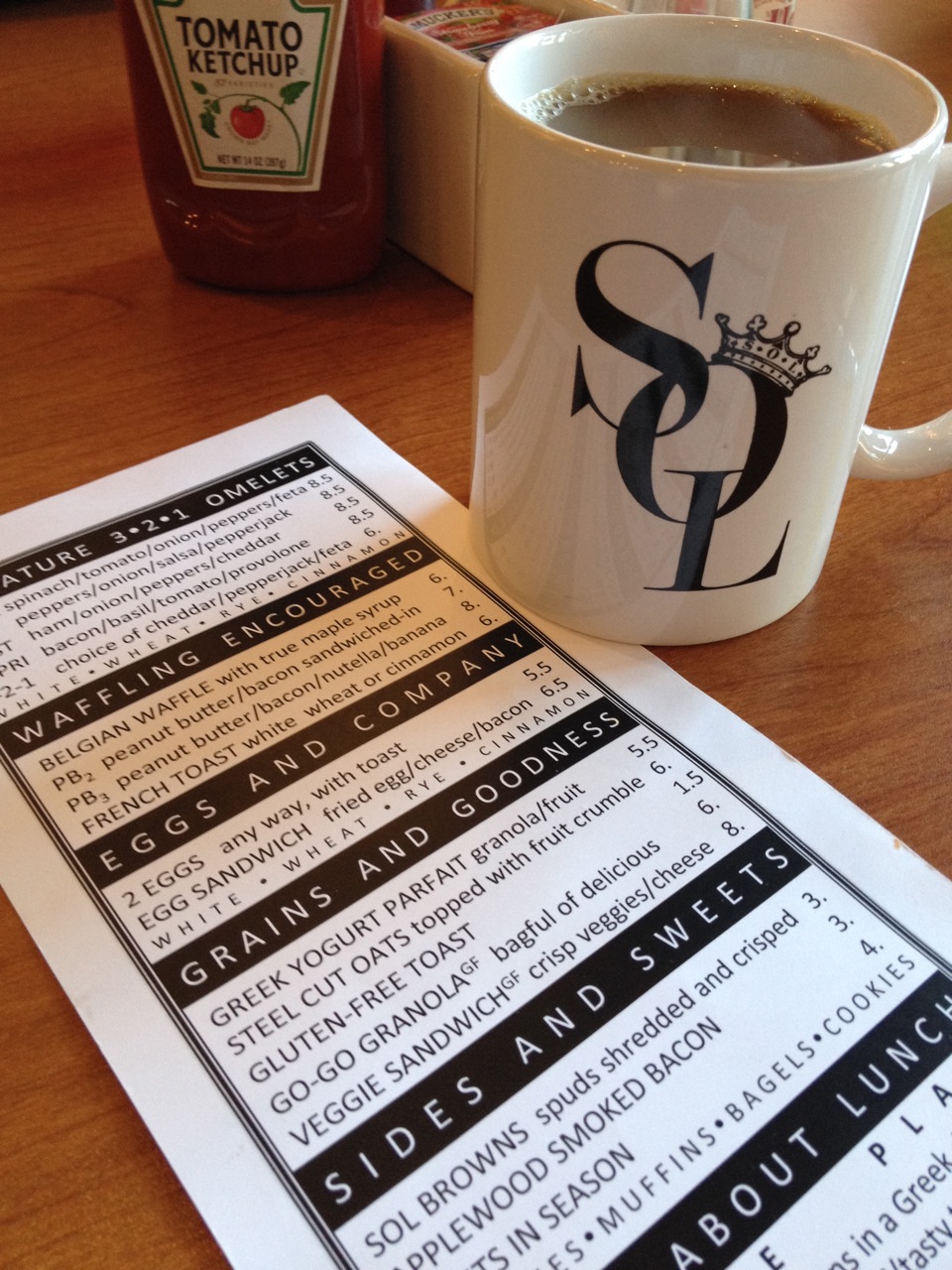 The breakfast menu is simple and all good. Major categories include omelets, waffles, eggs, “grains and goodness” (which means yogurt, oatmeal, and granola), and sides. Coffee comes from Thunderkiss. We chatted with the owner Catherine as she strolled around greeting customers, and in conversation I got the sense that Jason’s no-nonsense attitude matched hers. 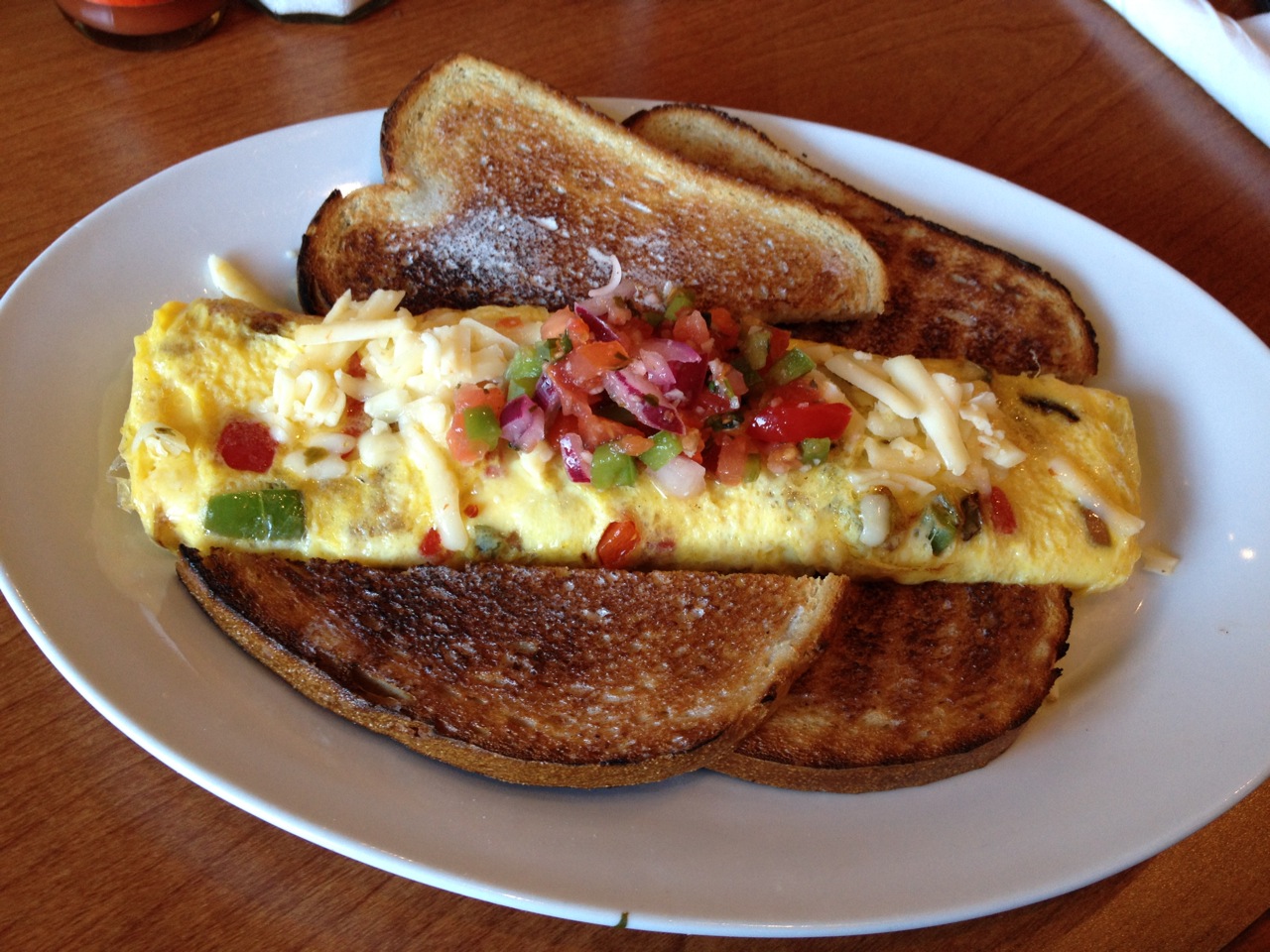 We picked one of the features, the SOL omelet with a side of rye, with peppers, onions, and pepper jack cheese. I have a love/hate relationship with omelets, but this one turned out to be one of the better examples I’ve had in recent memory. The ingredients are layered properly, the omelet is folded tightly, the eggs aren’t overdone, and there’s a little spice to it. 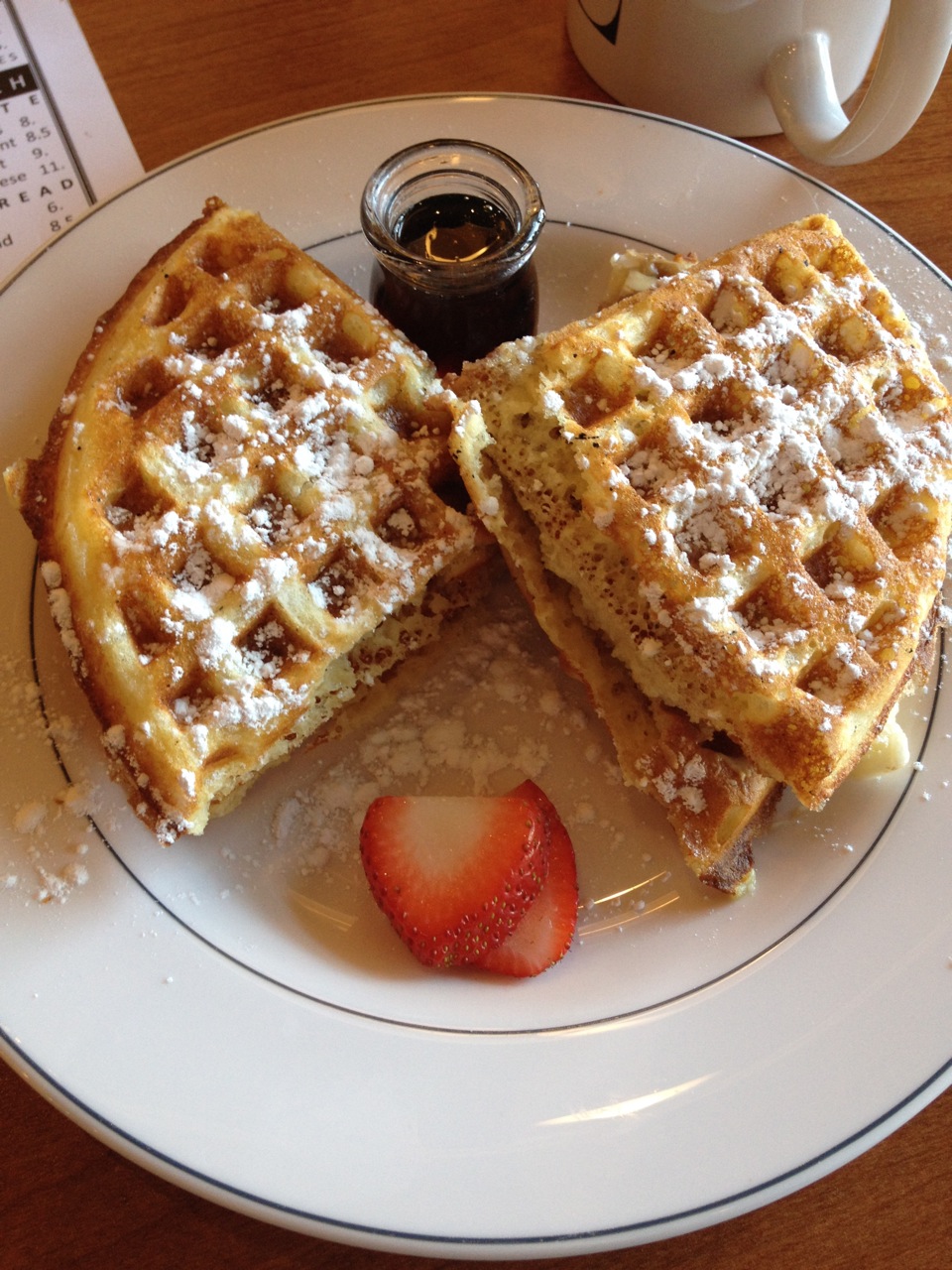 The PB3 waffle is a good example of the smirky attitude underlying the curio shelves and quiet atmosphere. You might not expect to see waffles loaded with bacon, peanut butter, Nutella, and bananas in a little cafe like this, but here it is. The PB3 tastes exactly as you would expect: crispy waffle, lots of soft and warm PB and Nutella, and a definite crunch from the well-cooked bacon. I mean, eying a list of ingredients like that, it’s hard not to be pleased by it. (You’ll also note the artful presentation throughout.) 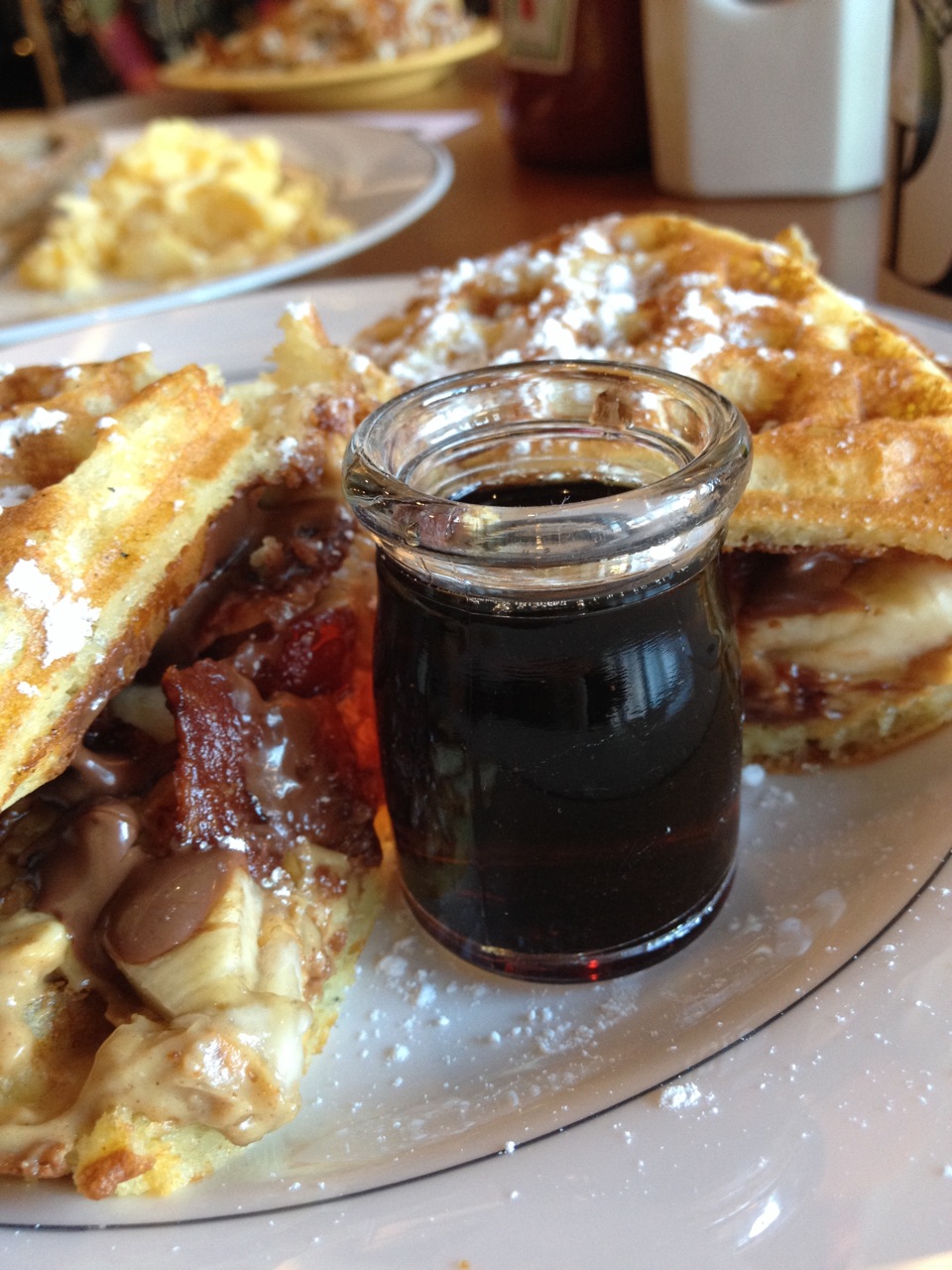 It’s also served with a little glass mug of maple syrup that reeks of “awwwww” adorableness. 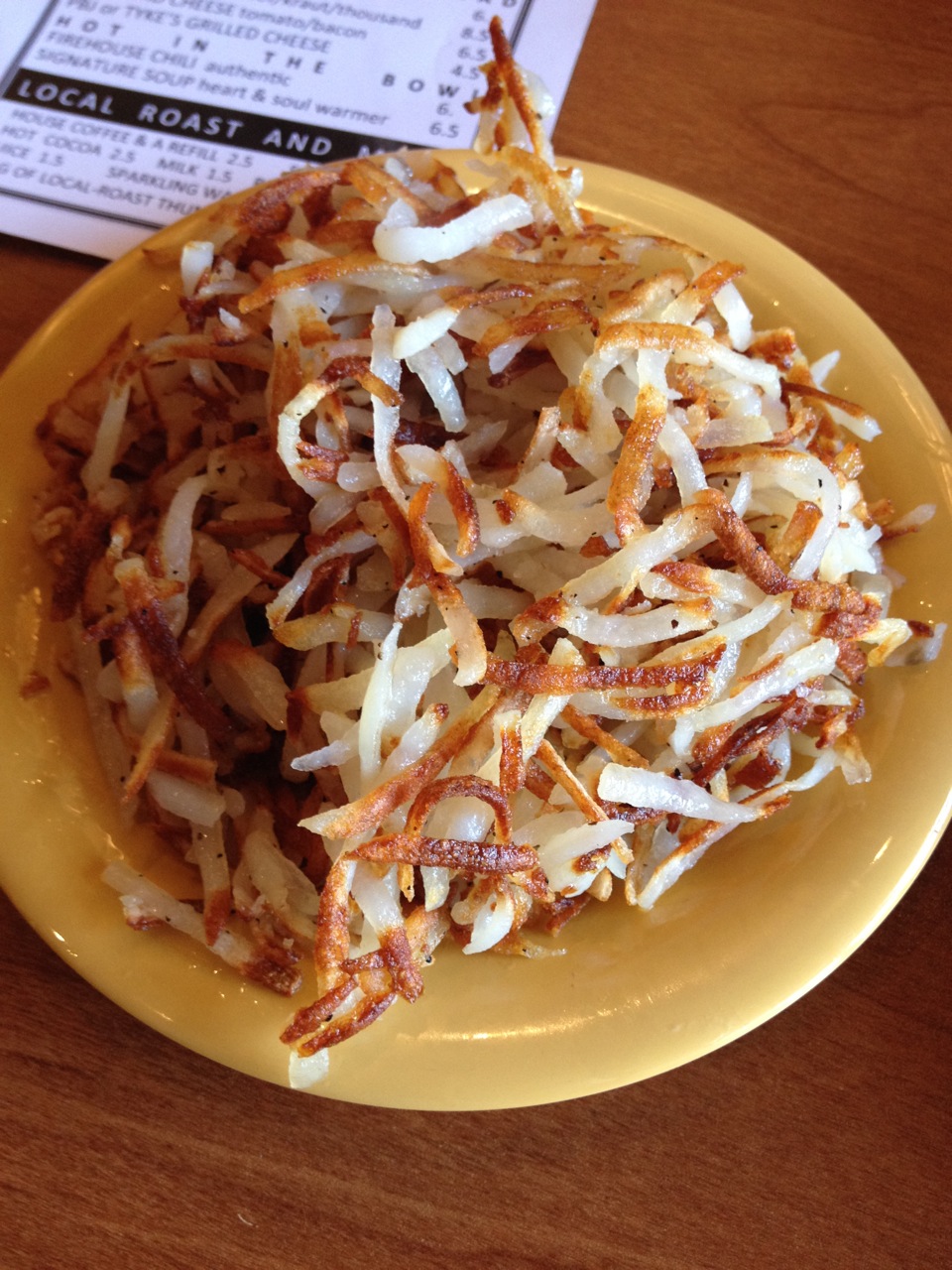 The side of hash browns stands up to any I’ve had. Ohio may generally be home fries territory, but I’ll always prefer the crispy texture of properly done hash browns. 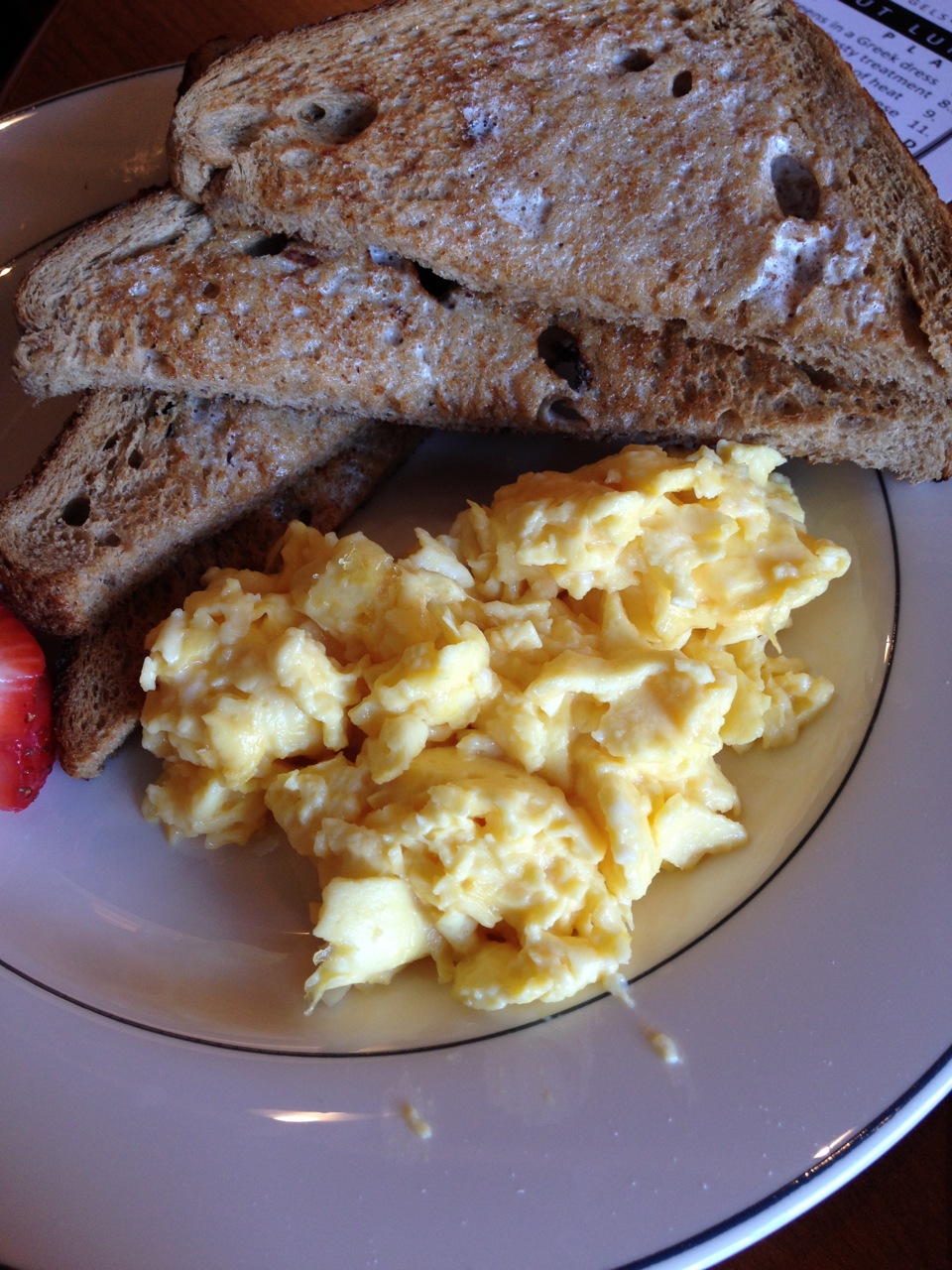 We had our two-year-old in tow that morning (the restaurant is kid-friendly, but maybe bring your own booster seat), and he enjoyed the two eggs, which are appropriately soft scrambled (which earns points from me) and come with a side of toast.

We’ve heard good things about South of Lane, and we found them to be all true. I think SoL is a good indication of Columbus’ growing breakfast/brunch scene, which doesn’t just mean more restaurants, but more restaurants with real personality serving their neighborhoods and offering solid breakfasts in creative combinations.