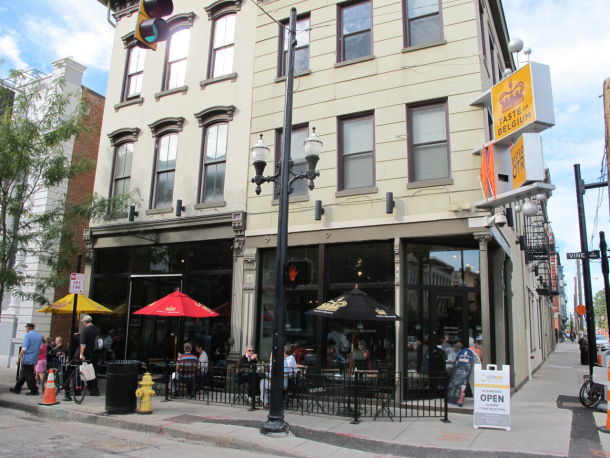 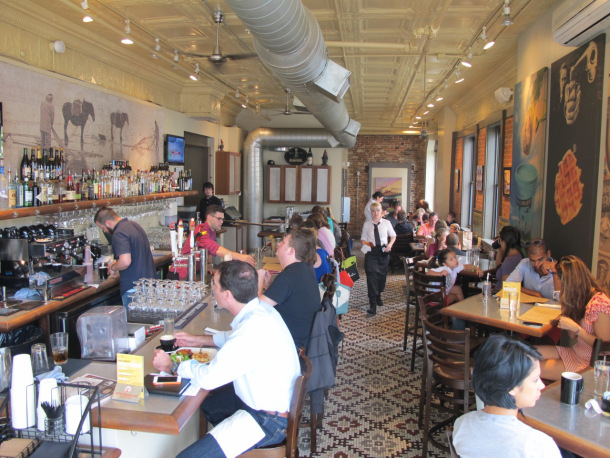 We’ve known and loved Taste of Belgium’s stall at North Market for years. I mean, it was our first taste of real Belgian waffles, and it’s a regular snack whenever we’re strolling the market. In following the Columbus location, we’ve eagerly followed their development in Cincinnati, too. The company began as small market stalls at North Market and Findlay Market, but has since expanded to two brick-and-mortar locations in Cincinnati. (There was briefly a second Columbus location in the Wexner Center, although that has since been replaced by Heirloom Cafe.) 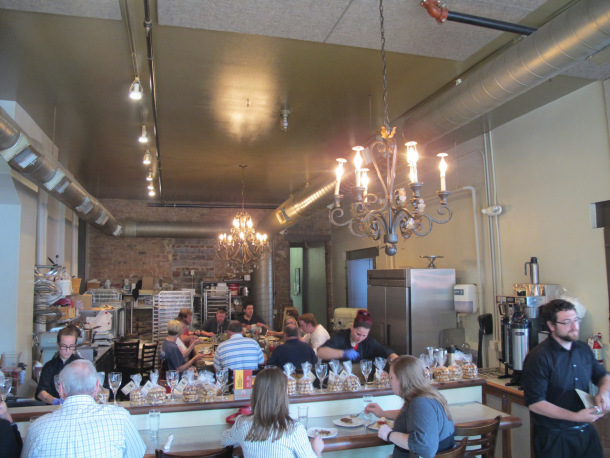 The mainstay of Taste of Belgium’s growth is their location in the Over-the-Rhine neighborhood. The restaurant seems to serve as an anchor for the neighborhood in its re-development, a prime example of the new businesses moving in while retaining the look and feel of the historic district. The bistro is a bright corner space that makes the most of its building. There are all the right elements: tin ceiling, old tile floors, exposed brick walls. The space is separated into two halves: one half is most of the seating and the bar, the second half includes more tables and a counter, as well as most of the production kitchen, although during the weekend it’s a large private table you can reserve. 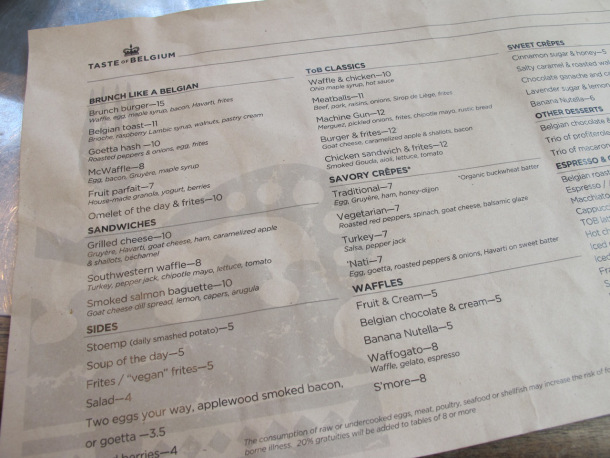 Taste of Belgium rebranded and revamped their menu recently. We’ve benefited from the additions at the North Market location, but the bistro menu covers more ground with sandwiches, sweet and savory crepes, and waffles, plus brunch classics and a featured Brunch Like A Belgian section. 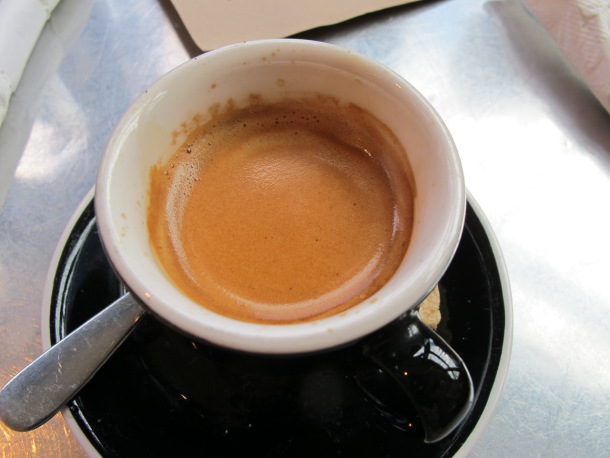 They’re a full service coffee shop, too. Brunch at Taste of Belgium was the beginning of a busy day exploring the city, so I ordered a shot of espresso to start. 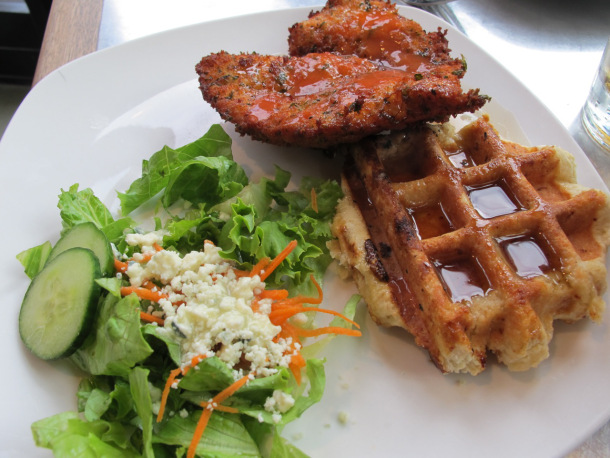 One of the features on the new menu is the chicken and waffle. It pairs their signature Liege-style waffles (denser dough, beet sugar caramelized throughout it) with a generously breaded and spiced chicken breast, plus a side salad. The dish has become one of their standouts. You really can’t beat one of their sweet, dense waffles paired with crispy and spicy chicken. 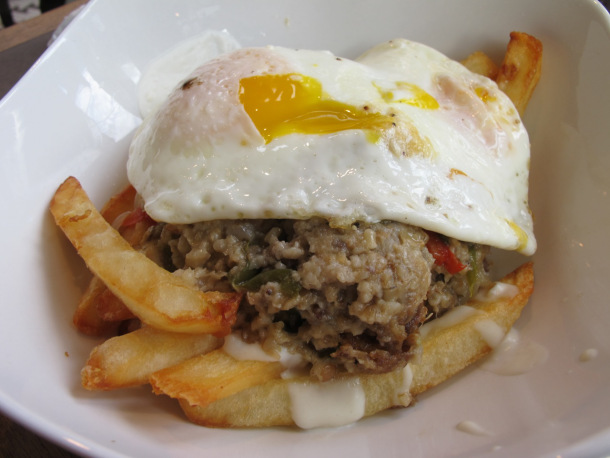 We were in Cincinnati, so we had to have goetta, right? Right! I’ve had goetta before, but it’s never really had a chance to shine for me, so I immediately zeroed in on the goetta hash. Our very helpful server suggested adding an additional egg and some of their house bechamel, and I think he was spot-on. This is up there with one of my favorite dishes of 2014. Crispy Belgian frites, well-seasoned goetta, sauteed veggies, over medium eggs, and a ladle of the sauce. Each bite was rich and savory. My kind of breakfast. 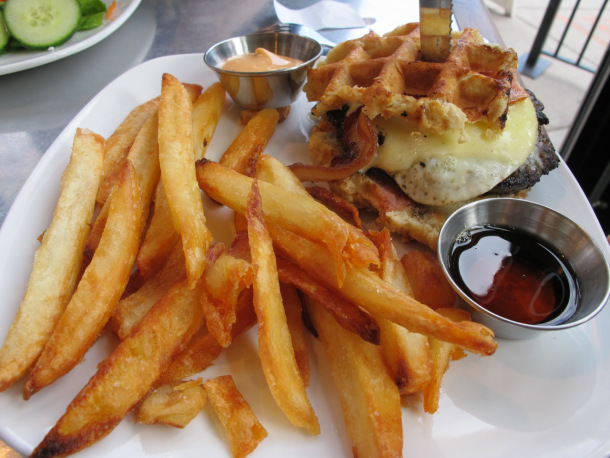 The brunch burger was also a winner. They halve a waffle length-wise, then fill it with a cooked-to-order patty, fried egg, havarti, and bacon. Comes with a generous side of frites, maple syrup, and a spicy mayo. 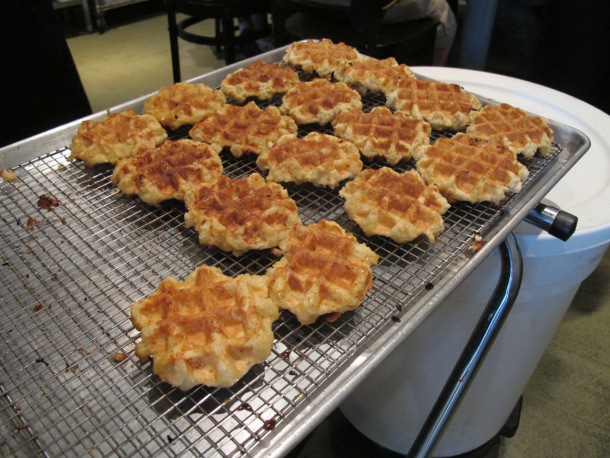 Taste of Belgium is defined by their waffles. If you’ve never had them, you need to seek them out. Most restaurants call their waffles Belgian, but what we’re actually served is a lighter and crispier American style. 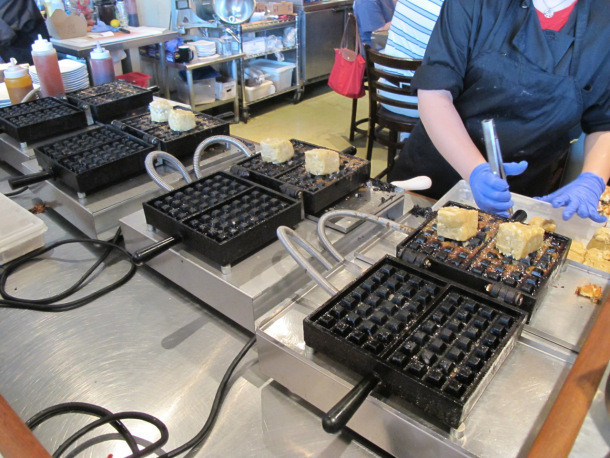 Real Liege-style waffles are meal unto themselves. They’re hand-held, sweet and a little sticky, and it’s easy to eat a few in one sitting. They don’t refer to them as batter, but as dough. Notice how dense it is: the dough is a solid block rather than a soupy batter ladled into the irons. 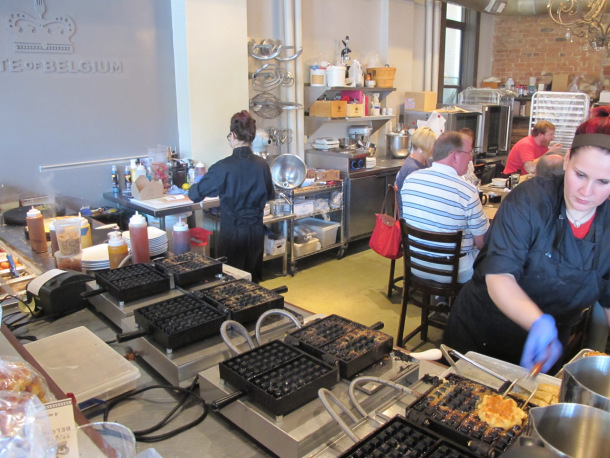 It’s not surprising to see someone busy at FOUR waffle irons in the restaurant. They’re just trying to keep up with the demand. I remember reading, too, that these are specialty waffle irons that the owner Jean-Francois Flechet brought it from Belgium. 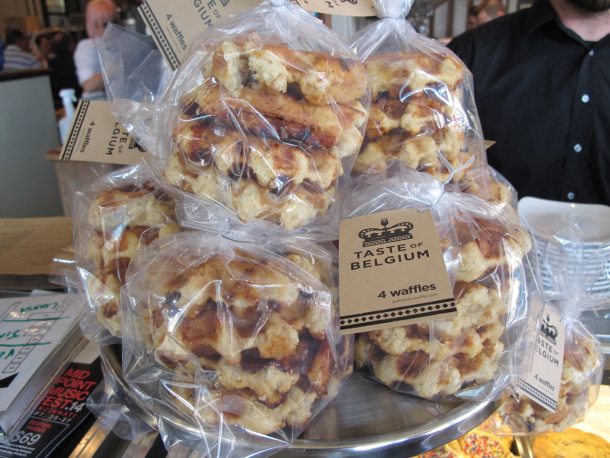 It’s not a bad idea to grab a bag or two of waffles on your way out the door, especially if you’re spending the day walking the neighborhood.

There’s a reason why Taste of Belgium pops up at the top of any Cincinnati brunch list. All the elements are there: great historic neighborhood, cool location (which will only be improved by when the streetcar launches), and a creative and easy to love menu. This makes me appreciate the North Market location even more, and look forward to returning to this one.

Bada Bean Bada Booze Offers the Best of Both Worlds