A Morning in German Village – Part 1 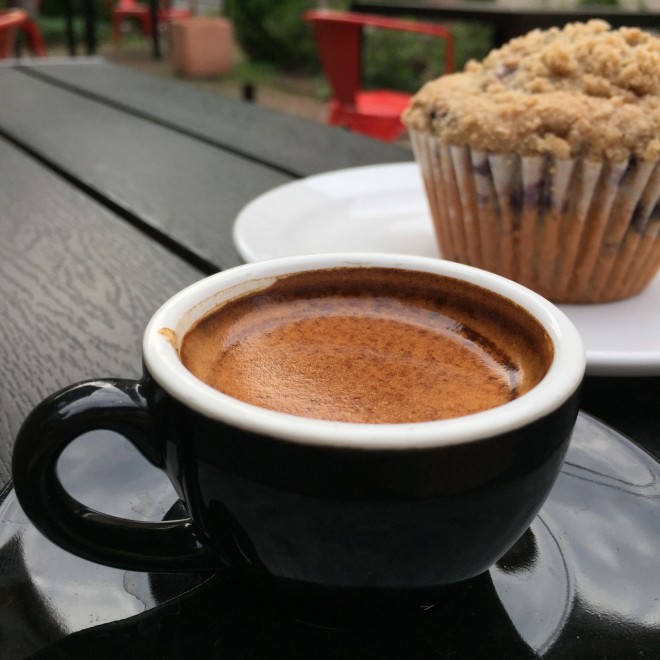 More and more, I’ve come to appreciate the simple joy of a good destination: getting to eat, drink, shop, wander all in one place. If you plan accordingly, you can make any neighborhood a destination.

It started – as any good morning should – with an espresso and a muffin at Stauf’s. 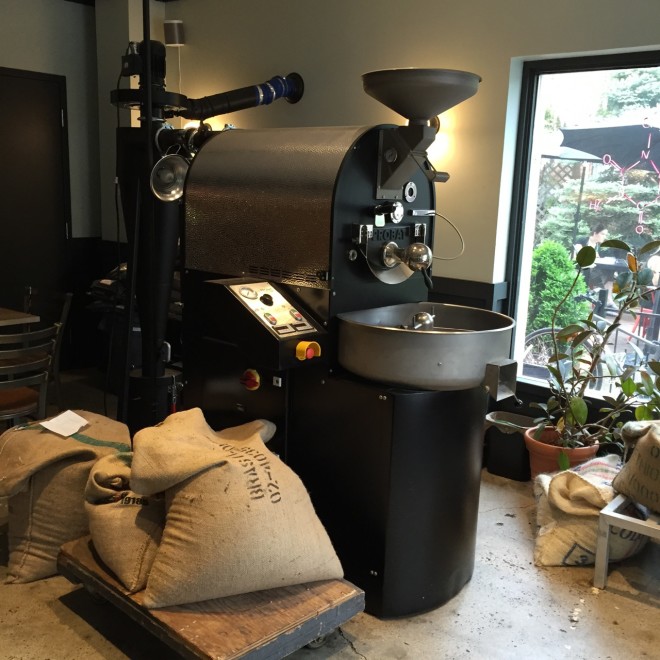 Stauf’s Coffee Roasters is the parent company to Cup O’ Joe, and in recent years they’ve rebranded some of the shops under the Stauf’s name. This included closing the Mojoe Lounge side of the business; the German Village location was renamed Stauf’s and renovated (they also opened a stall in North Market). Part of the remaking includes the addition of roasters in the stores. I appreciate this because it gives you a more direct connection, seeing the roaster making the coffee you can enjoy or buy to take home. 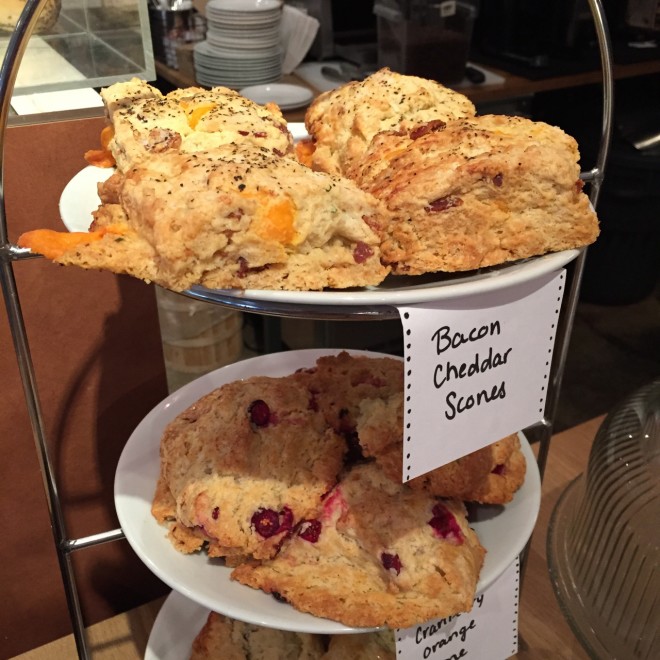 Stauf’s has also stepped up to bake almost everything in-house (with the exception of Sammy’s Bagels). So you’ll see towers of scones, cinnamon rolls, and muffins. 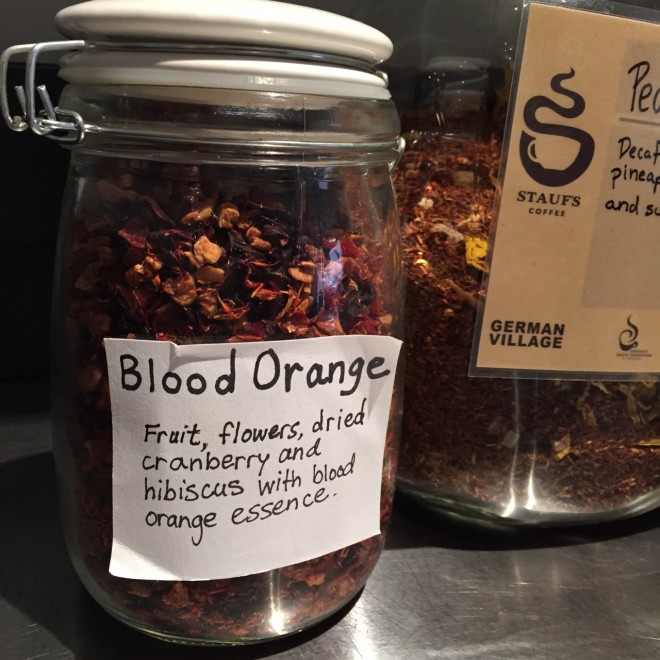 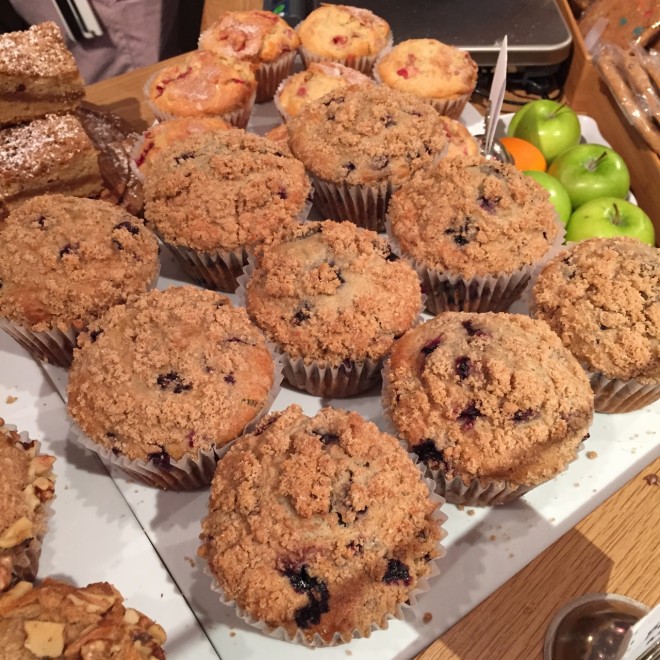 The barista at the counter recommended the blueberry muffins. Over 1/3 of the muffin’s weight is just from the blueberries.

With the renovation of Cup O’ Joe and Mojoe Lounge into Stauf’s, the combined spaces provide a lot of room for studying, reading, meeting, or just hanging out. There are tables near the front of the cafe, more in the adjacent building, and a nice patio out front. 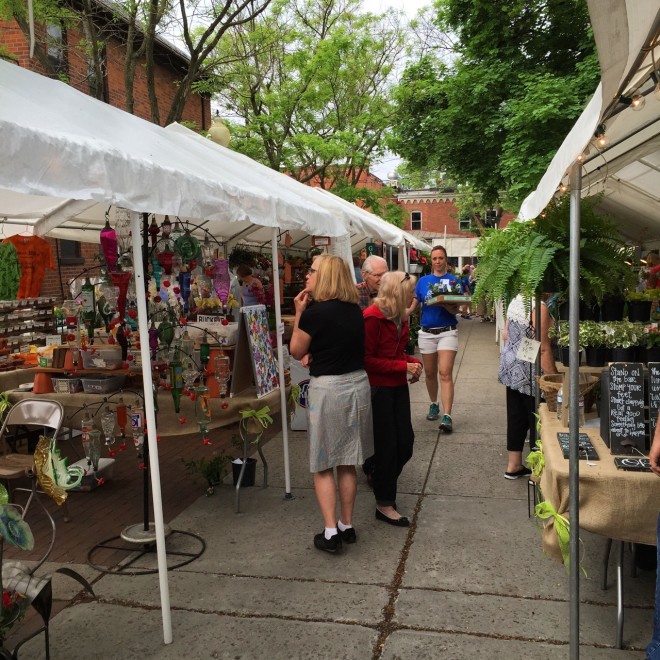 Following the espresso and muffin, I strolled across the street to the Garten Markt. This annual outdoor plant and craft sale is held in front of the Meeting Haus, and is organized by the German Village Garten Club. 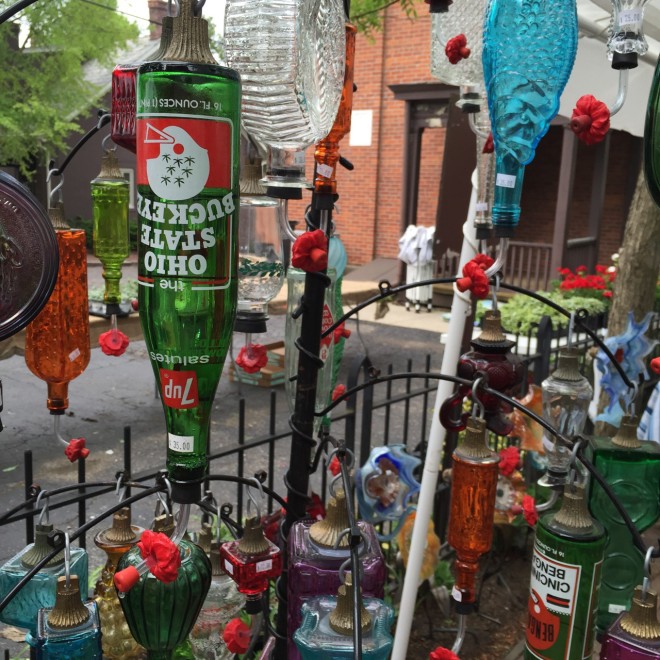 In addition to flowers and herbs, there were a number of crafts on display. These hummingbird feeders caught my eye. 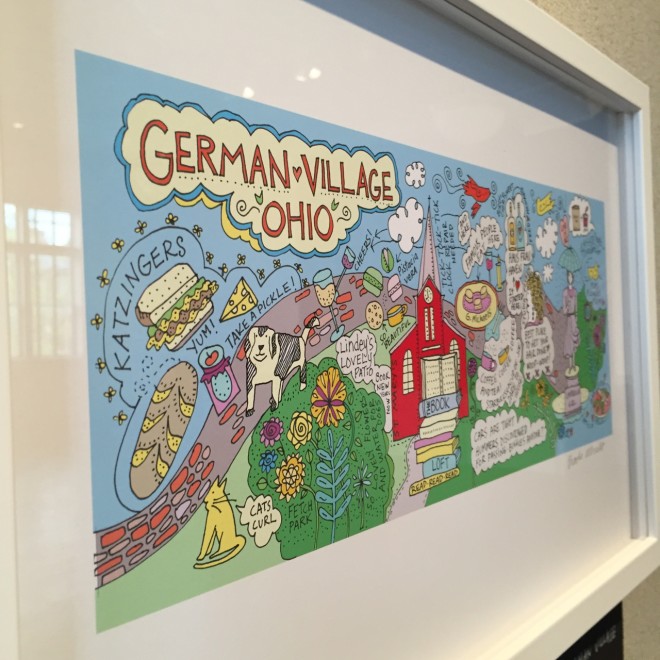 I wandered inside the Meeting Haus, too, where there’s a rotating art exhibit upstairs. The latest display is called “Outside and Inside: Images” by Brooke and Eric Albrecht. It features both photography and drawing, and runs through June 7. 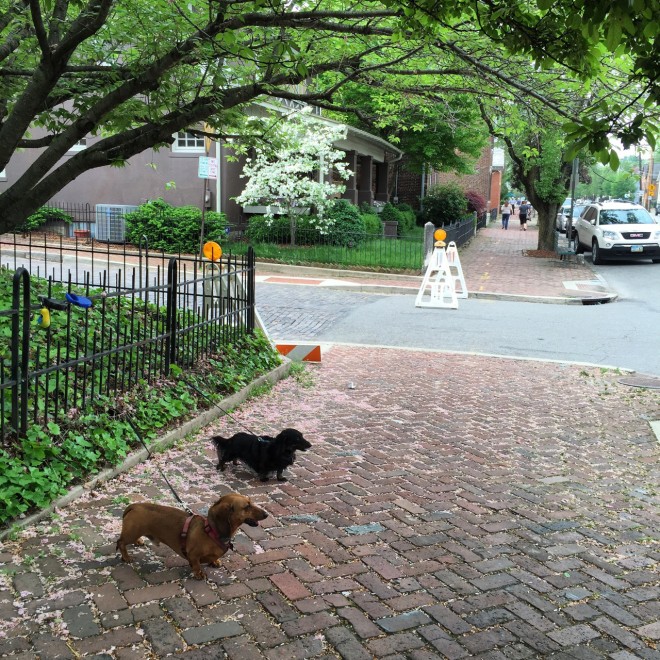 With a beautiful spring morning, there were plenty of owners out with their dogs. 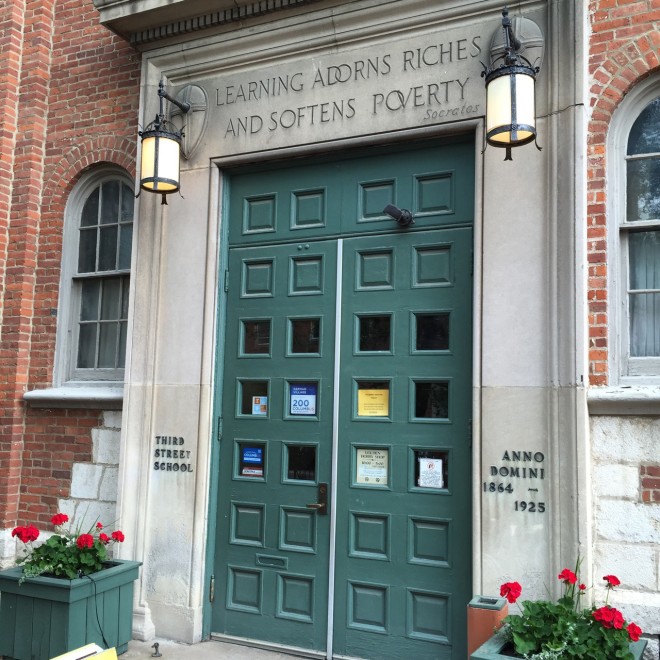 One unexpected discovery for me was the Golden Hobby Shop. There I was very warmly greeted by a gentleman at the front desk, who explained the shop is a consignment store for goods made by senior citizens. The building itself dates back to 1864 and formerly housed the Third Street School; it’s fascinating to see just for the history and architecture. Columbus Parks and Recreation purchased the building back in the early 1980’s for the Hobby Shop to use. 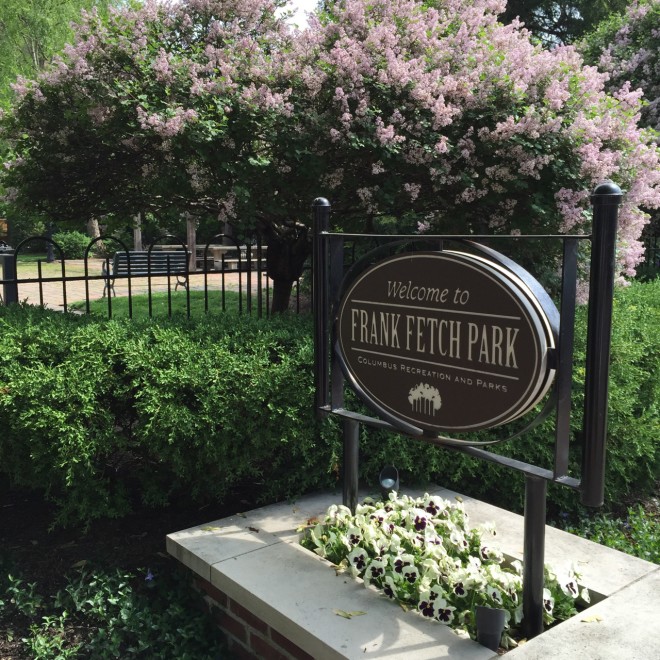 After the market and visitors center, it was time for a stroll over to the park. Now, Schiller Park rightfully nabs a lot of attention in German Village, but there are little pocket parks to be discovered, too, probably the best of which is Frank Fetch Memorial Park. The little park – scaling about two tenths of an acre – is maintained by volunteers from the German Village Garten Club. It’s named after Frank Fetch, considered the “father” of German Village, and is styled on the smaller European parks used as little neighborhood centers. 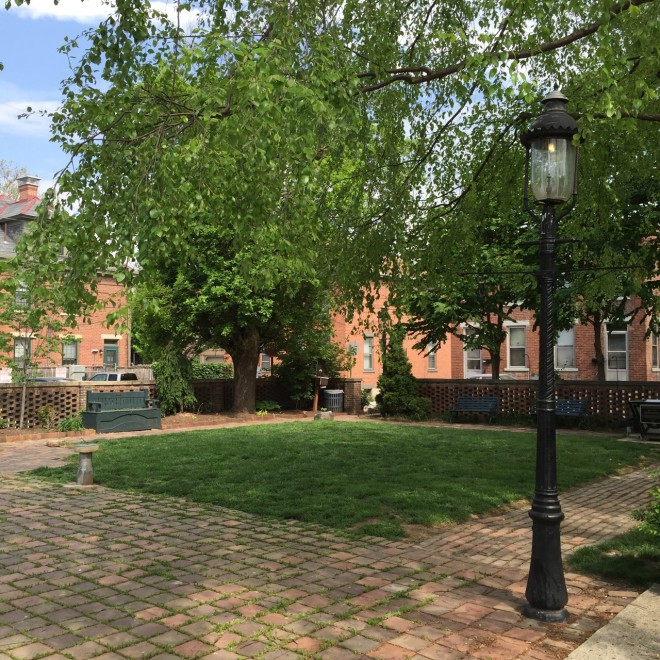 I got to meet with Terri Dickey, a local realtor with Vutech-Ruff, volunteer, and chair of the Haus und Garten Tour and Jerry Glick, who has volunteered extensively with the German Village Society, the Visitor Center, the Garten Club, and other groups. As longtime residents, the two of them gave me a lot of insight about the park and the neighborhood in general.

The park is a surprising little find in the northern edge of German Village, very quiet and unexpected, surrounded by beautiful houses. There’s a small fountain in the center, plenty of shade and benches for slowing down a bit. 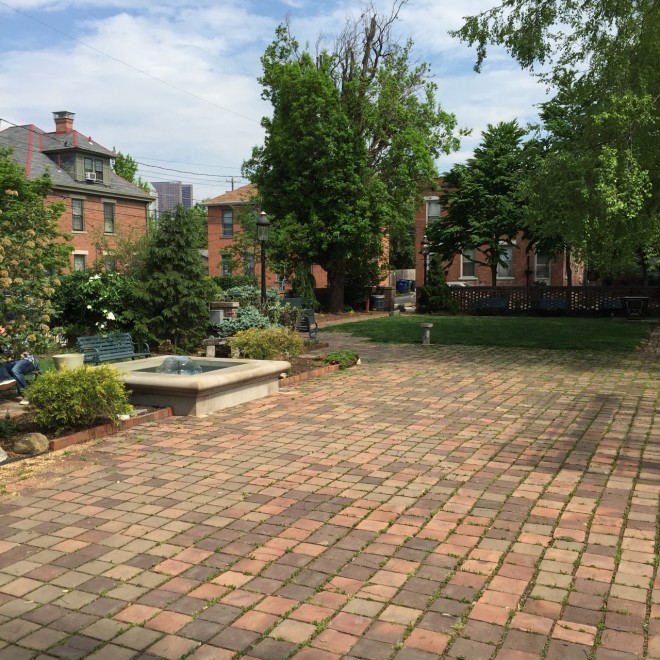 The park also plays host to the Third Sunday Concert Series. As the name implies, every third Sunday – June through September – you can gather at the park for world-class live music. You can see this year’s dates and performer line-up on the events page of the German Village Society here. Mark your calendar – the first concert is June 21st! 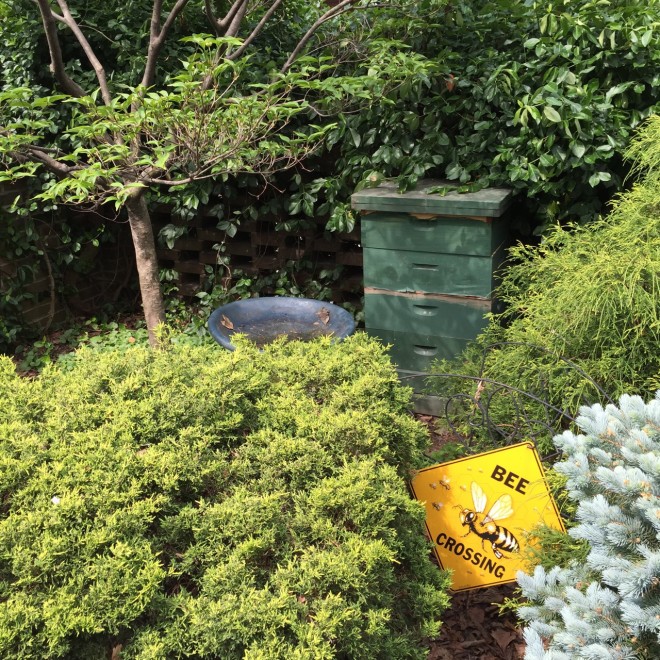 The park also has its own beehive, tucked safely away behind some bushes. Jerry said they’re planting lots of flowers to attract bees and butterflies to the park. 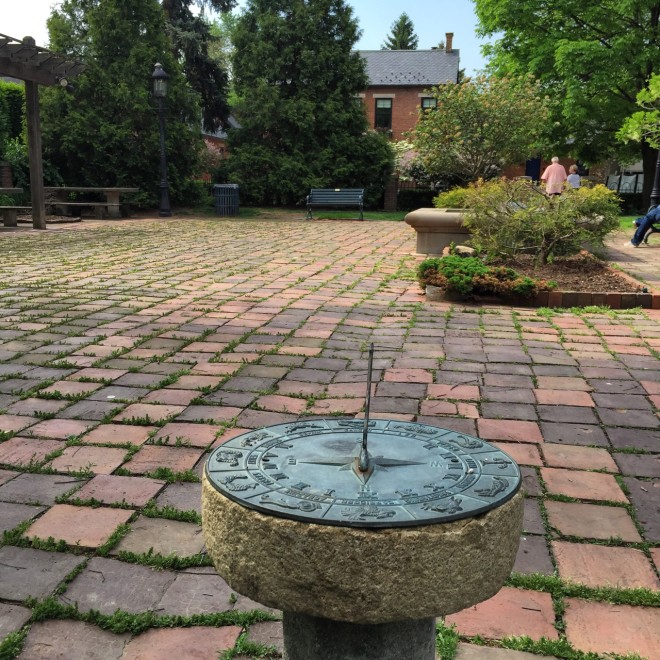 That’s a start! There’s much more to explore in the village, so read on for part two!

Looking for an excuse to visit soon? This Saturday, May 16 is Village Valuables from 8am to 3pm.

(This visit was invited by the German Village Society. Opinions and photos are my own.)