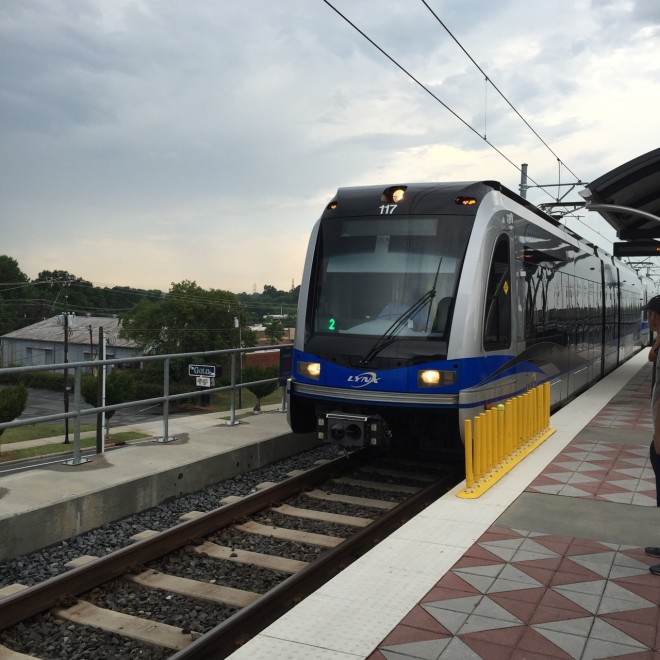 On our way last week to a special family trip on Tybee Island, Georgia, we stopped overnight in Charlotte, North Carolina. The city was ideally suited along our route, and between Instagram followers and Charlotte’s Travel & Tourism bureau, we were armed with plenty of suggestions for dining and sightseeing. 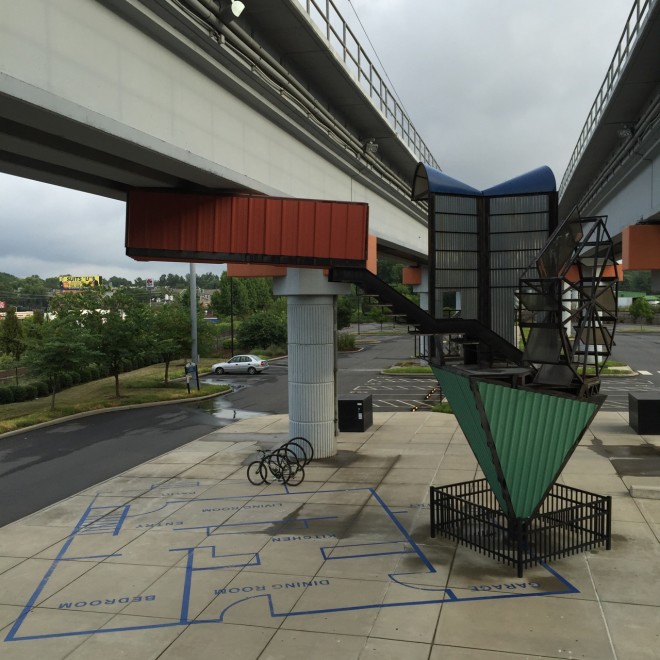 First off, we were impressed with Charlotte’s size. As we drove into town, Mrs. Bfast w/Nick looked up some history of the city, and were struck by the many similarities between Charlotte and Columbus. Charlotte is the 17th largest city in the U.S. (Columbus is 15th), and like Columbus it’s a significant financial center, with multiple banks and insurance companies located there. One thing that we noticed is, despite Charlotte’s long history, much of the downtown buildings and infrastructure looked new.

We only had a short night and the morning in the city, so we mapped a quick route Uptown for some dinner and light exploration. Our hotel was the beautiful Renaissance Charlotte SouthPark. From there, we were a short drive to one of the park-and-ride stations for the Lynx, Charlotte’s light rail system. We parked – for free – then rode the train Uptown. 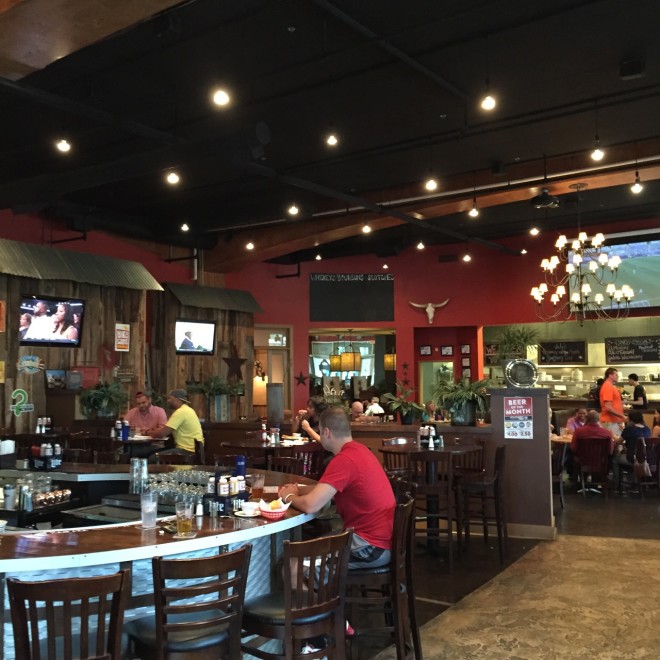 The journey proved to be a simple one, but very fun for our boys (heck, for me too – I love any form of trains). We took the blue line to its end in the center of Uptown Charlotte. We were in the mood for barbecue (especially being in the Carolinas), and our stop landed us right next to Queen City Q. 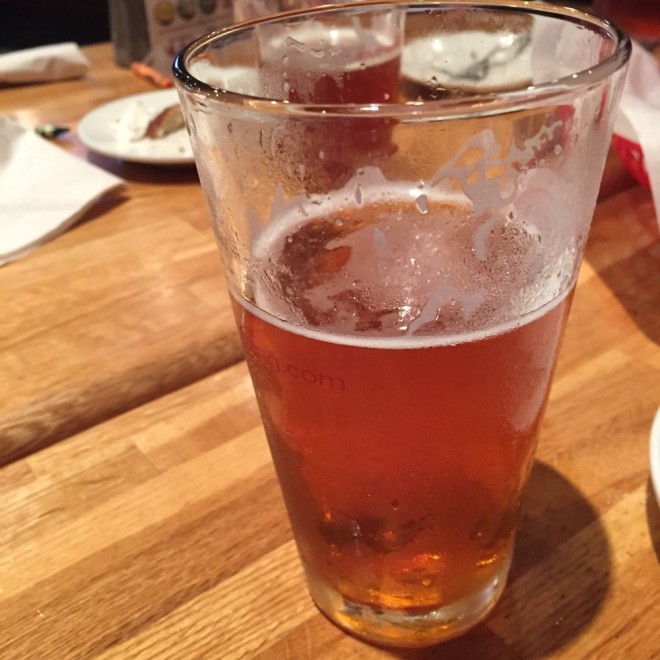 One benefit of landing there were the local beers on tap. We tried two IPAs, the Hop, Drop ‘n Roll from NoDa Brewing and the Higher Ground from Birdsong Brewing. Both excellent and especially fitting paired with barbecue. 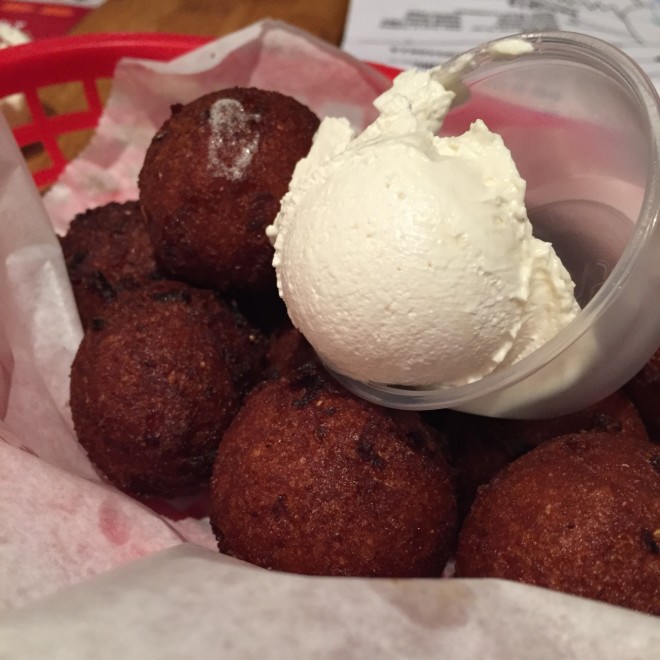 We made a pass at their hush puppies (a hit with our boys). 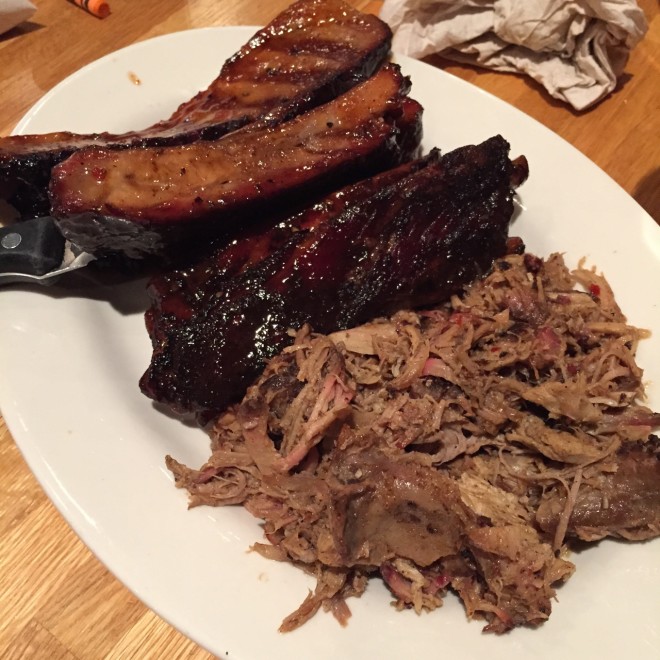 We sampled a little bit of everything with one of the Q Platters: pulled pork, brisket, St. Louis ribs. 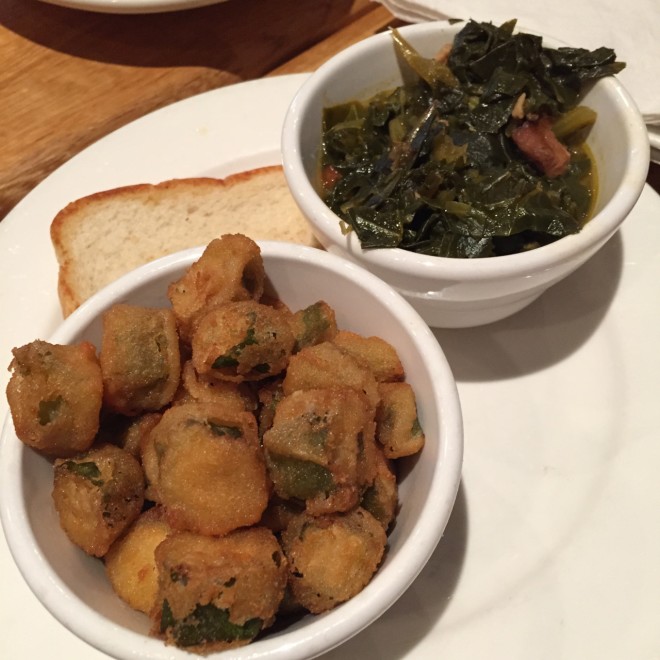 Sides of okra and collard greens, of course. 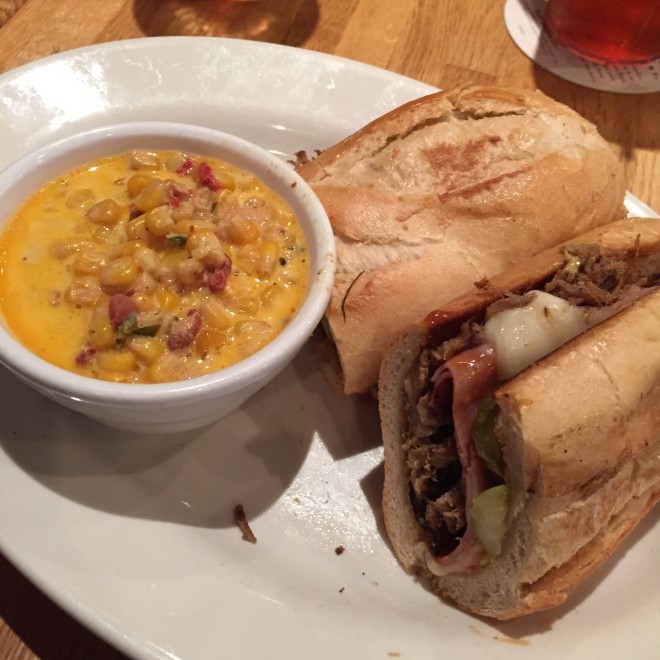 Two of the more memorable diehs from the meal, though, were the Q-Ban Sandwich, using their pulled pork, and a side of their maque choux. The sandwich was rich and smokey; the maque choux had a lovely bite. (Maque choux is side dish of braised corn, peppers, onions, and other veggies.) 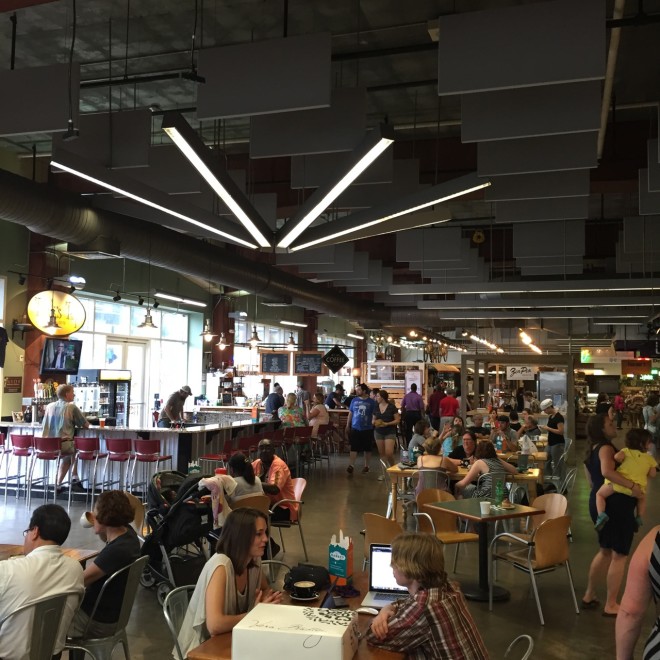 In the same building as Queen City Q was the Seventh Street Public Market. A few people had suggested checking it out, so we strolled through. Like many markets across the country, it has a series of stalls lining the edges, with a few running up the middle, too. A part of the market center is dedicated to seating. 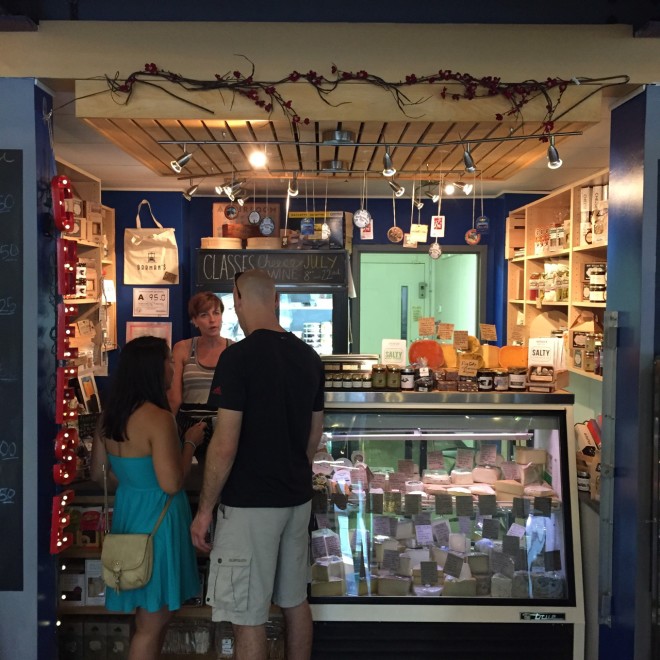 There are prepared foods, flowers, meat, cheeses, wines, beer, coffee, you name it. I loved this little cheesemonger stall. 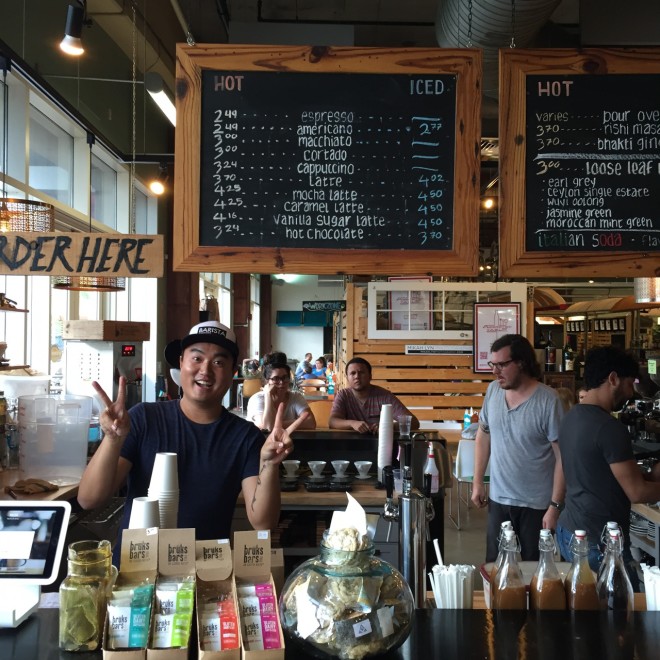 Another friend recommended Not Just Coffee in the market. Clearly this was the right choice. 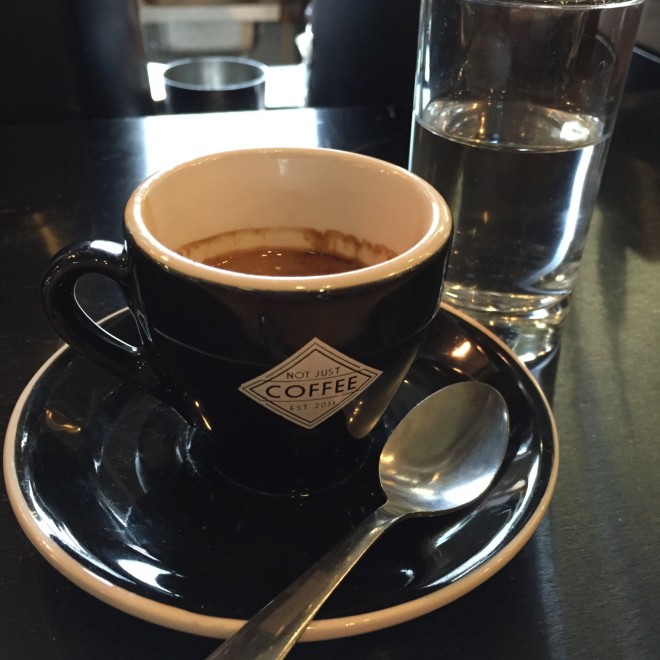 Our barista was fantastic, and the espresso and cortado were top notch. 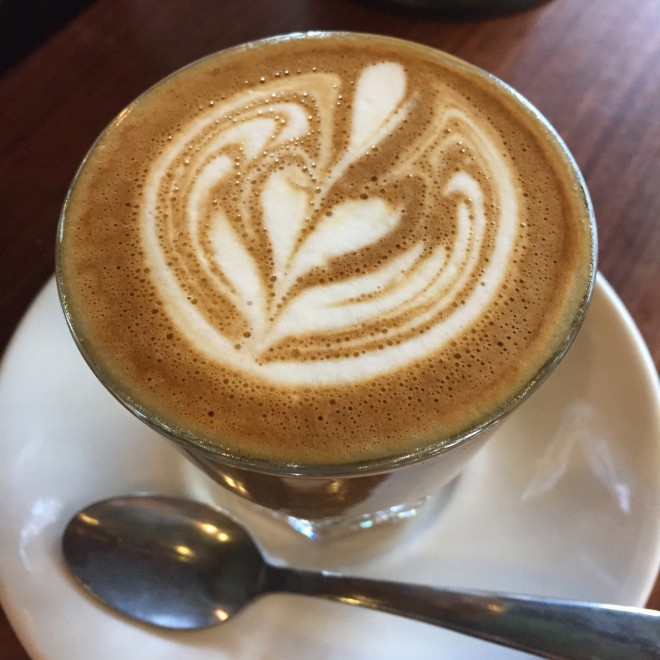 After a day of driving and then scooting around the city, it was nice to take a moment and just enjoy some coffee in the market.

Following dinner, the market, and coffee, we strolled around Uptown a bit more, and then it was time to head back to the hotel. 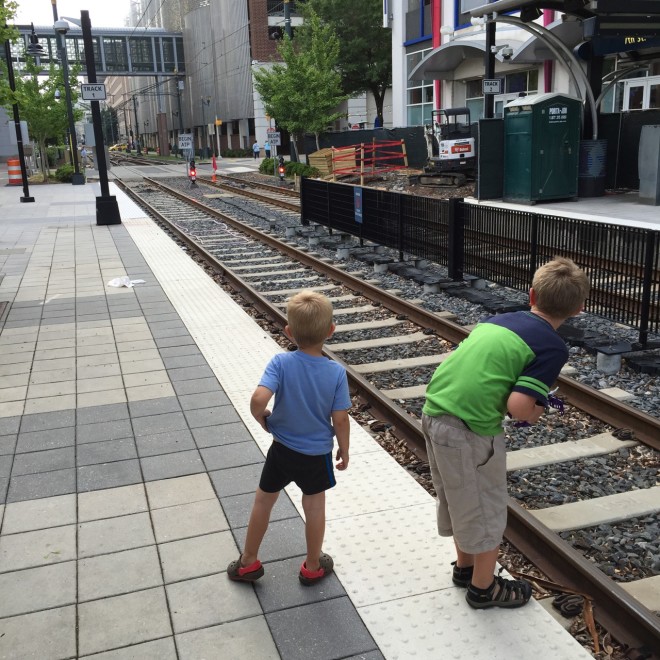 Waiting on our train…

The Seventh Street station – currently the end of the line – is under construction, apparently because they’re extending the line further into Uptown. 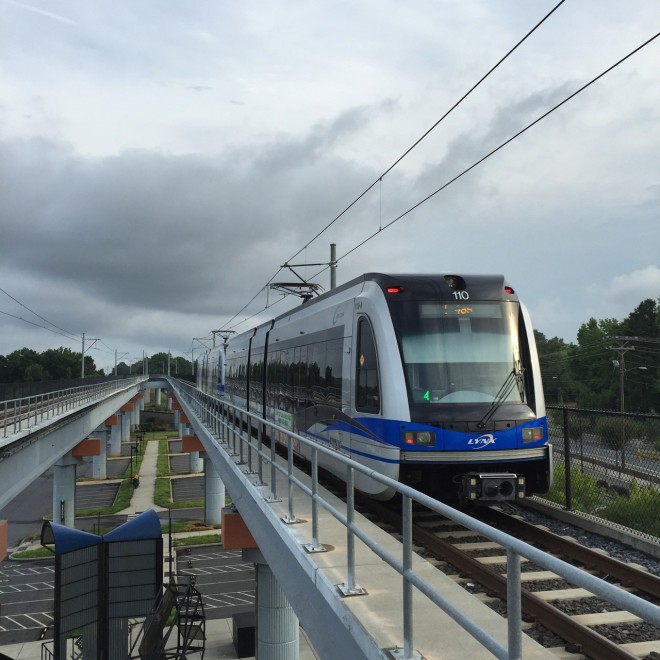 Thanks for a fun visit, Charlotte! As with any short trip, we barely scratched the surface and left with a long, long list of recommendations. We’re looking forward to a return trip, hopefully sooner than later.

Now, stay tuned to read about breakfast the following morning…

An Easton Staycation at the Residence Inn