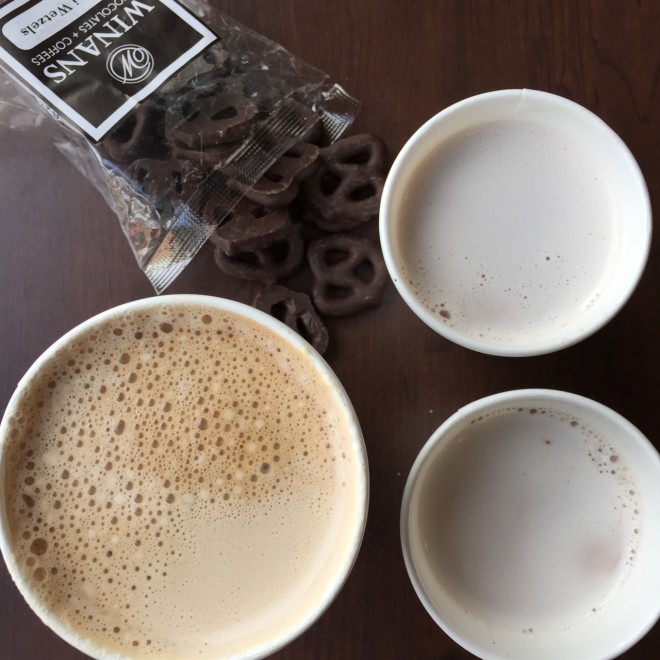 If you haven’t read it already, catch up with part one of our recent explorations of German Village. We had breakfast at the German Village Coffee Shop (s’mores pancakes!), played in Schiller Park, and attended part of a walking tour with author and GV resident John M. Clark.

It was a chilly autumn day when we followed John’s tour, so a stop at Winans Fine Chocolates & Coffees seemed in order afterward. Winans has a little corner shop at Third and Whittier; it’s the perfect place to hole up with a couple hot chocolates and a mocha. 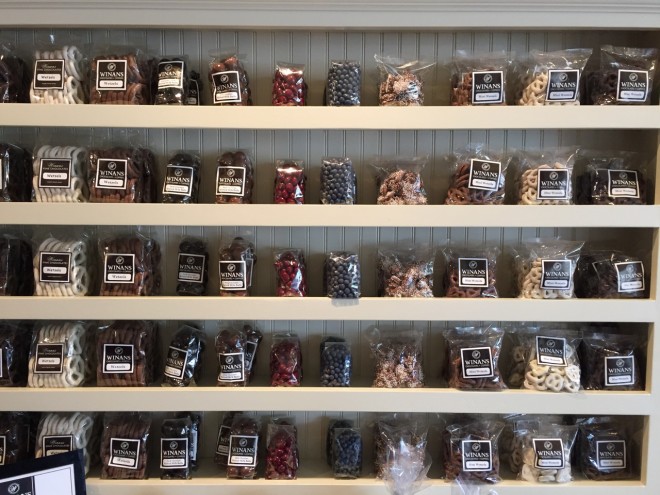 True to the “chocolates” in their name, Winans sells all types of chocolate-covered goodies, from pretzels to fruits to cookies to espresso beans. 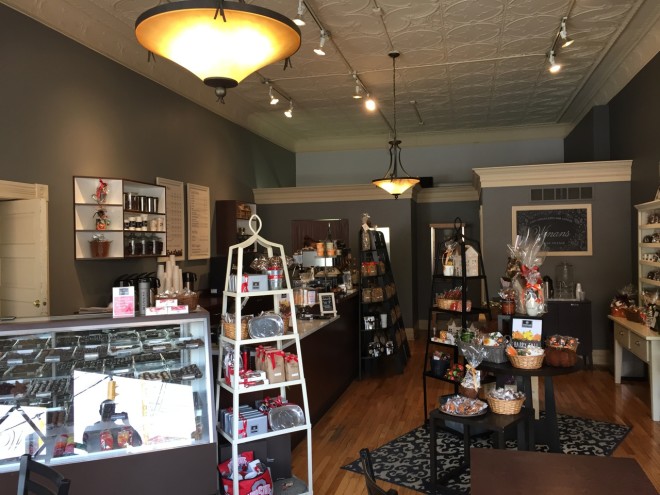 We enjoyed some chocolate-covered pretzels, a slice of almond cake, and a frosted pumpkin cookie during our visit. 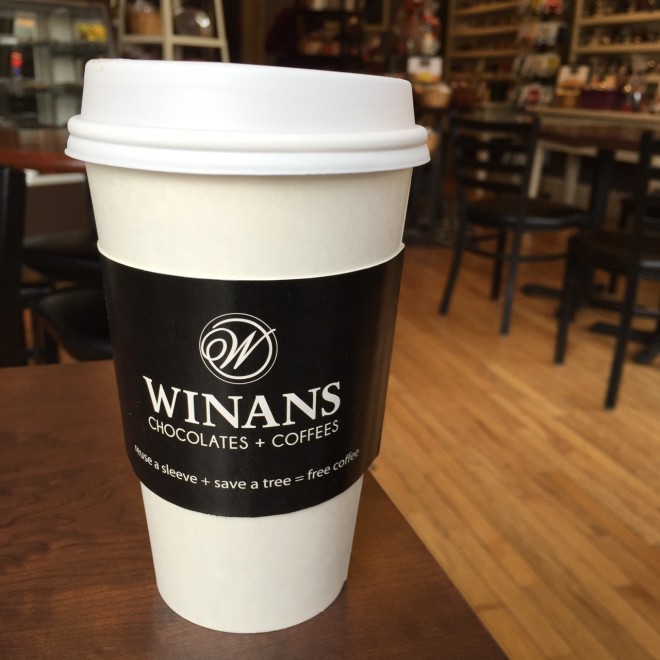 German Village has several of these little shops – think of Stauf’s or Pistacia Vera, too – where you can take a break from your explorations, warm up, and enjoy a snack. 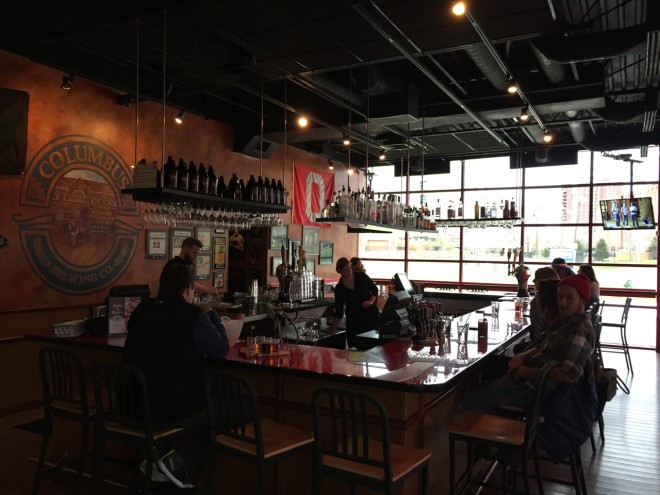 But if you’re in for a bigger meal, especially a bit of brunch, German Village has you covered, too! There are several options for breakfast and brunch around the village and the surrounding neighborhoods. For the beer-lover, there’s always brunch at the Columbus Brewing Company Restaurant. Tucked down on Front Street in the Brewery District, CBC Restaurant is still – to my mind – a hidden gem when it comes to brunch. 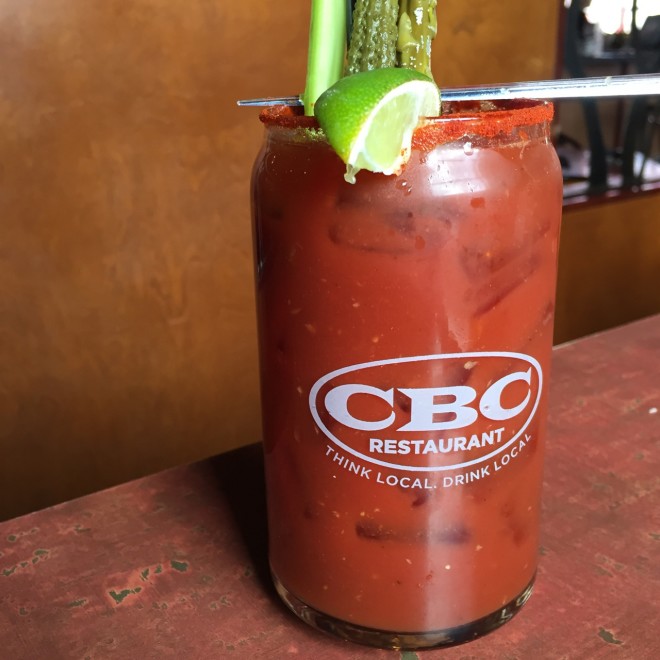 You’d expect beer to be a big feature of their menu – and indeed it is – but on the brunch menu they serve eight different Bloody Marys, too, all made with a house mix. CBC Restaurant really nails the Bloody Marys. They manage to balance the texture and the flavor, so it’s never too thick or thin, too spicy or too bland. Case in point: the Smokey Mary. It’s based on a serrano-infused vodka and includes smoked paprika, lime, an asparagus garnish, and – get this – a tomato basil sweet paprika rim. Are you a Bloody Mary fan? Why haven’t you been here yet?! 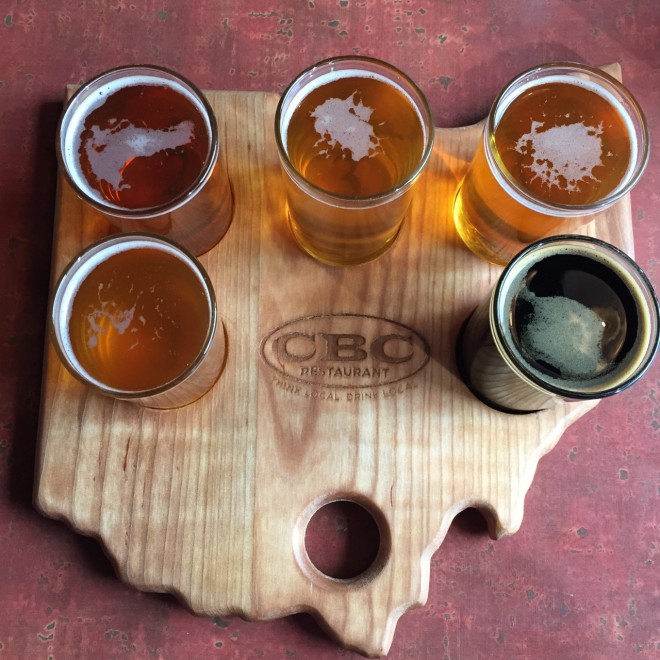 If you’re a beer drinker like myself, CBC Restaurant has you covered, too. They have two set “paddles” with a line-up of five beers each, although you can customize them. As expected, a couple of Columbus Brewing Company’s beers are featured (the brewery and restaurant are separate businesses). I mixed and matched their regular IPA with their Dalton session IPA, and some Jackie O’s and Brew Kettle beers, plus Seventh Son’s Oubliette stout thrown in for “dessert.” 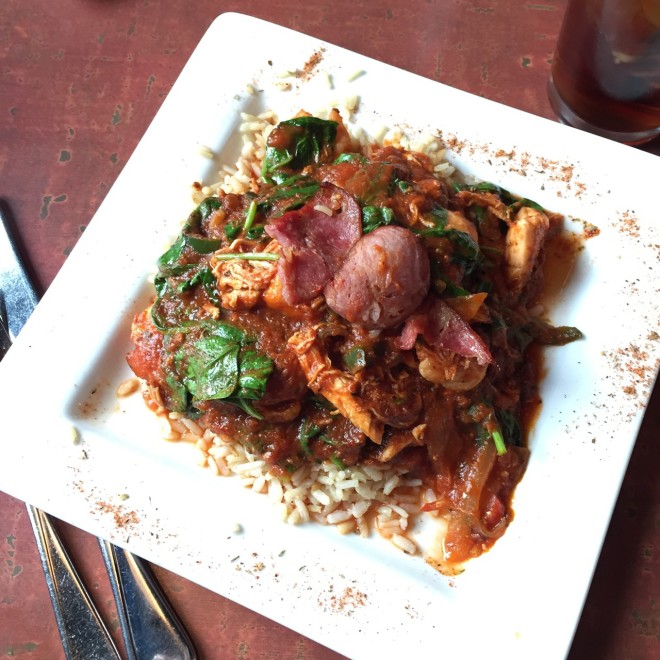 The brunch menu is eclectic and filling, with some southern and Cajun influences scattered throughout. We tried the rich and smokey jambalaya, piled with andouille sausage, chicken, salmon, and shrimp. 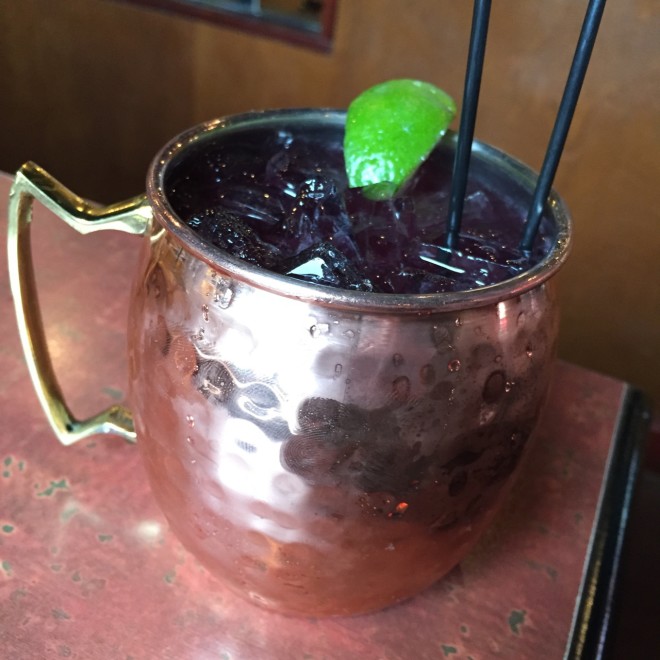 CBC Restaurant serves a fine cocktail list, too, including a really solid Moscow Mule. So if members of your party aren’t the beer or Bloody Mary types, they’ll find plenty to like. 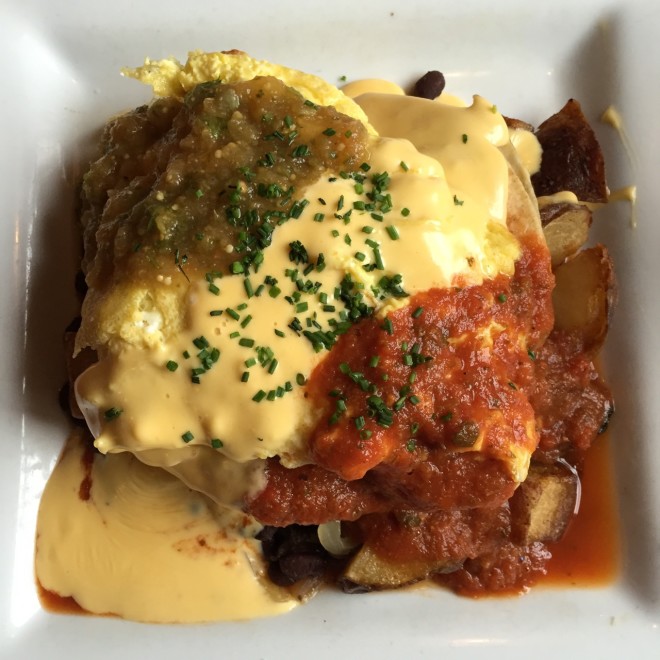 Jennifer Kessel-White, the GM, sung the praises of the huevos rancheros, and she obviously knows what she’s talking about. The huevos is another monster dish, layering tortilla chips with an onion/potato/pepper hash, plus eggs, black beans, and three sauces: a green tomatillo salsa, a red smoked chili sauce, and their pub cheddar. 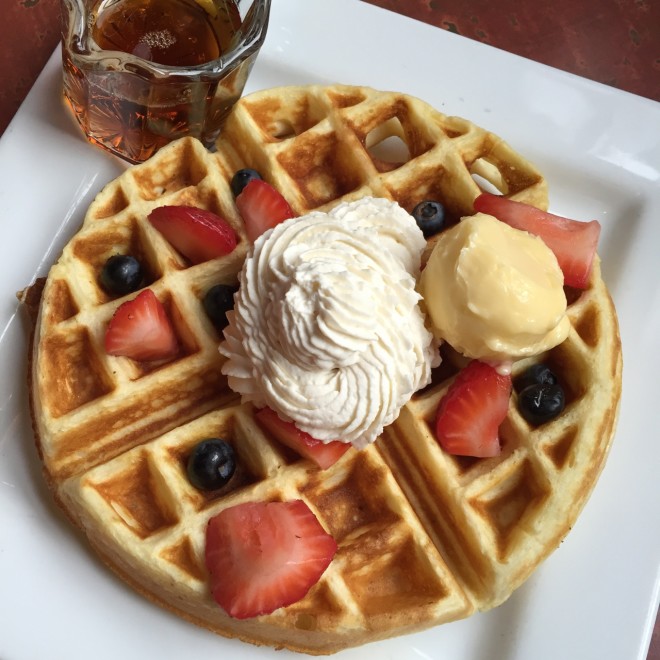 We’ve long given CBC Restaurant props for their kid’s menu, and we need to reiterate here. They cater to the kids by offering a creative menu that avoids the standard chicken tenders and French fries. And we’ve found that, when they’re given the chance, kids will embrace it. Our boys tucked in to a beautiful fruit-covered waffle and a plate of house-made biscuits and gravy. 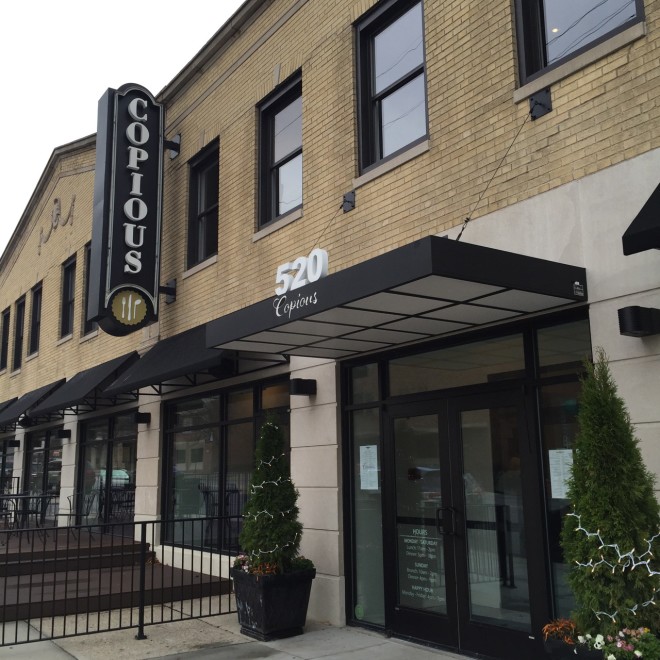 But that’s not all! Like I said, German Village offers many options for early morning eats. One of the more recent additions is Copious on North High Street. Copious opened about two months ago, after months of extensive renovations to the existing building. 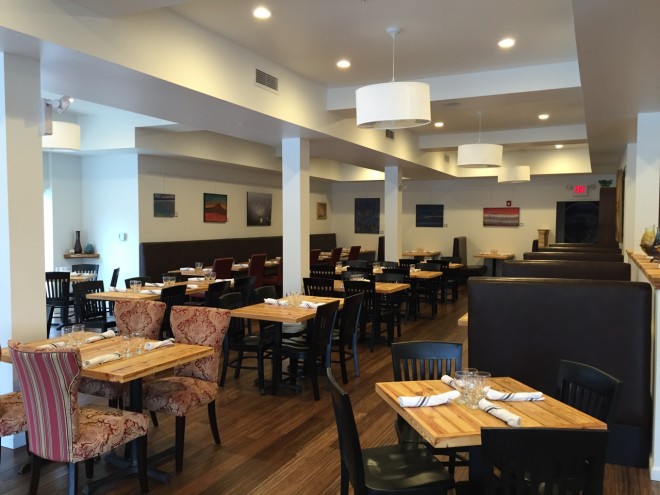 The restaurant space is bright and open, with a large dining room and a bar; perfect if you’ve got a big group. They serve lunch, dinner, drinks, and weekend brunch. The restaurant is complemented by Notes, their downstairs live music venue, which has already been popular for great jazz. It’s a perfect combination: get dinner upstairs at Copious, catch music and drinks at Notes afterward. 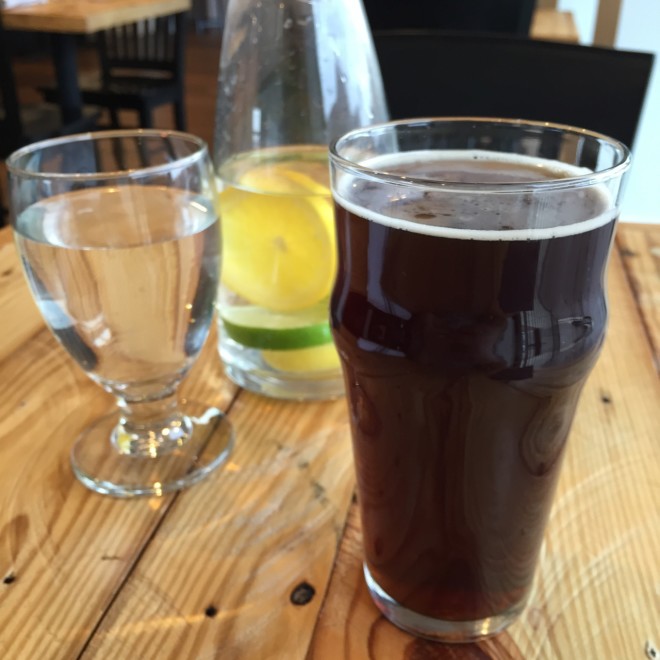 Copious has a solid beer, wine, and cocktail list, with a beer menu featuring a decidedly Ohio theme. Make sure you ask your server to see the draft list. With my brunch, I enjoyed North High Brewing’s sweet and malty Maple Brown Ale. 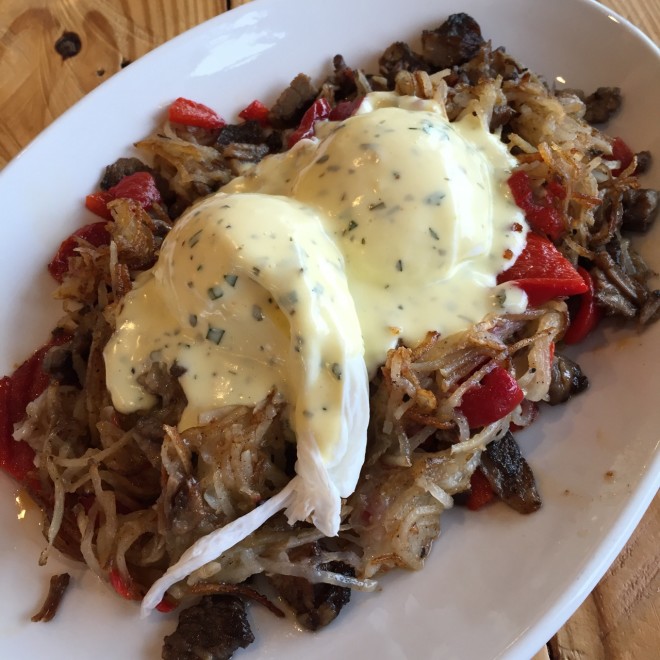 The weekend brunch menu features 9-10 items ranging from stuffed French toast and eggs benedicts to white cheddar grits and steak and eggs. I’m always on the lookout for something interesting, and so the Eggs Oh’ Bryan caught my eye when I stopped in (on a separate visit, not right after brunch at CBC!). My server David, who was very friendly and welcoming, reinforced the decision, saying it was his favorite of their brunch dishes. The meal combines elements of corned beef hash and eggs benedict, with a base of diced beef, shredded potatoes, red peppers, and onions, topped with two poached eggs and a tarragon hollandaise. It’s a big savory bite.

Hopefully you’ve gotten some ideas for your next stops at German Village! A good time to visit the neighborhood is this Sunday, December 6 for Village Lights! Stroll the neighborhood from 5-9 p.m. and enjoy the luminaries lining the streets. Shops and restaurants are open late, you can take carriage rides, and visit vendors outside the Meeting Haus.

Be sure to read part one of our recent visits, and catch up on some past explorations of the village this spring here and here!

(This visit was invited by the German Village Society. Opinions and photos are my own.)