Sneaking Down to Cincy – Part 1 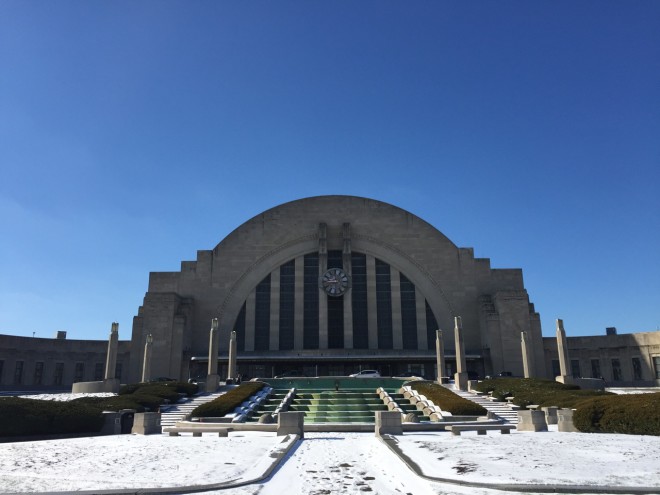 We’ve been itching to get down to Cincinnati for a long time. It’s been over a year since I last visited, longer for Mrs. Breakfast With Nick, and our boys had never been. We were looking especially for an opportunity to take them to The Art of the Brick at the Cincinnati Museum Center, and the visit turned into an overnight trip.

Our morning started with Nutella pancakes and five-spice pork benedicts at the Sleepy Bee Cafe in Oakley, and then it was on to the museum. I’ve never been to the Museum Center before, and so I wasn’t quite prepared for its size. The center is housed in the Union Terminal, once the primary train station for Cincinnati. It’s been converted to house multiple museums and an OMNIMAX theater, but you’ll see that trains are still involved. 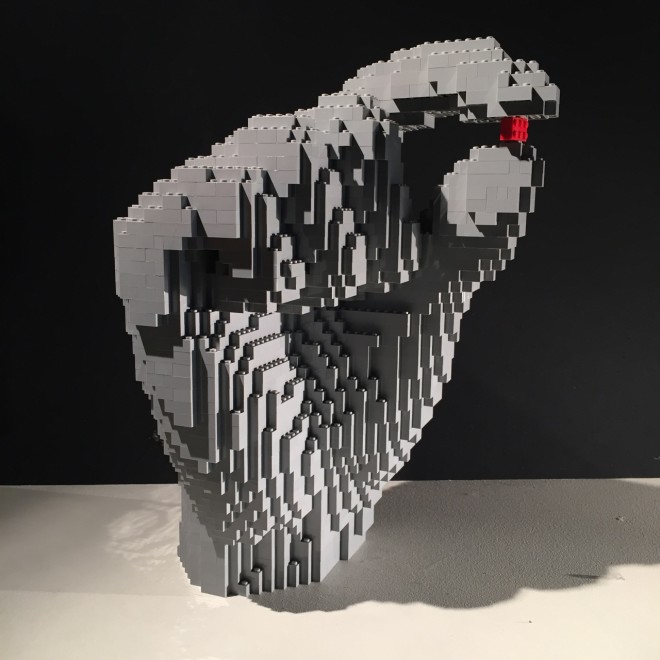 The Art of the Brick has to be seen to be appreciated. It’s not just a collection of real-life structures built of Lego (which is impressive, yes). Artist Nathan Sawaya works toward some really interesting expressions through Legos. Many of the pieces offer straightforward narrations of his thoughts, his struggles, his ideas, and the exhibit itself is peppered with inspirational quotes and observations from him, mainly about the nature of creation and play. The exhibit begins with a short video showing him and his process; then you’re turned loose to explore. 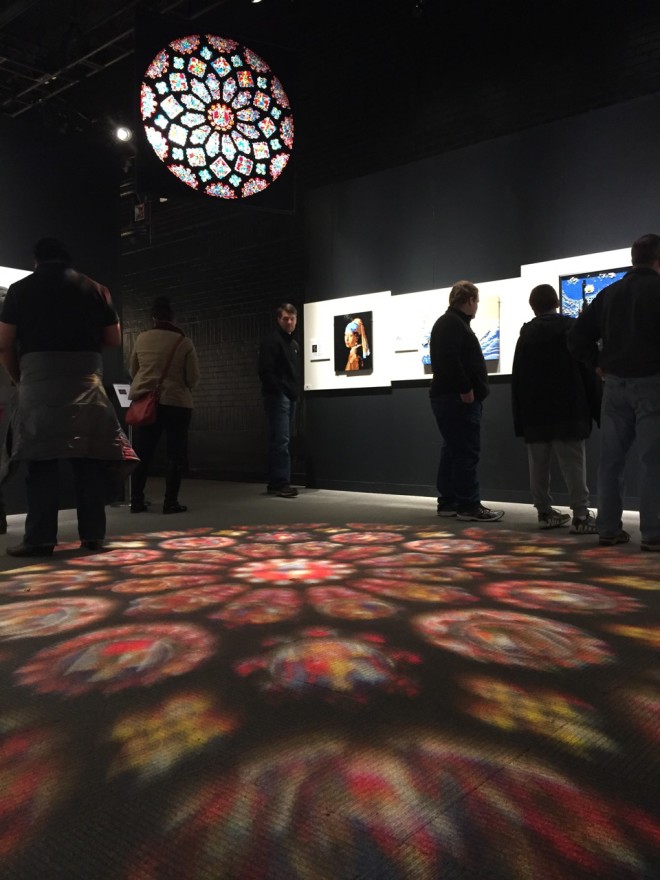 The first room features his recreations of famous paintings with Legos. I loved how it was lit partially with a “stained glass” window made of transparent colored Lego pieces casting patterns on the floor. 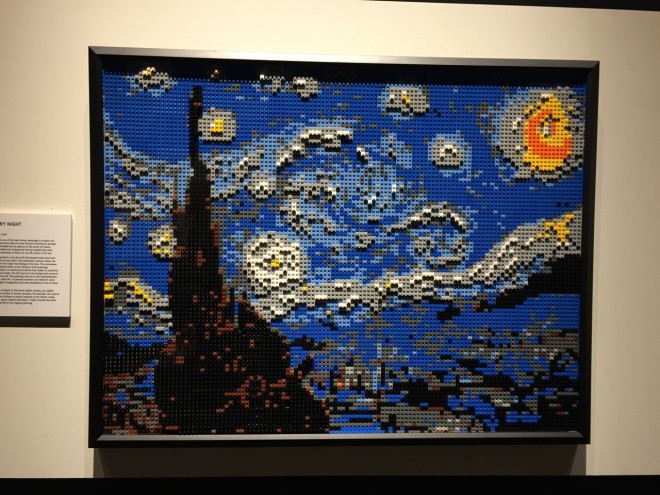 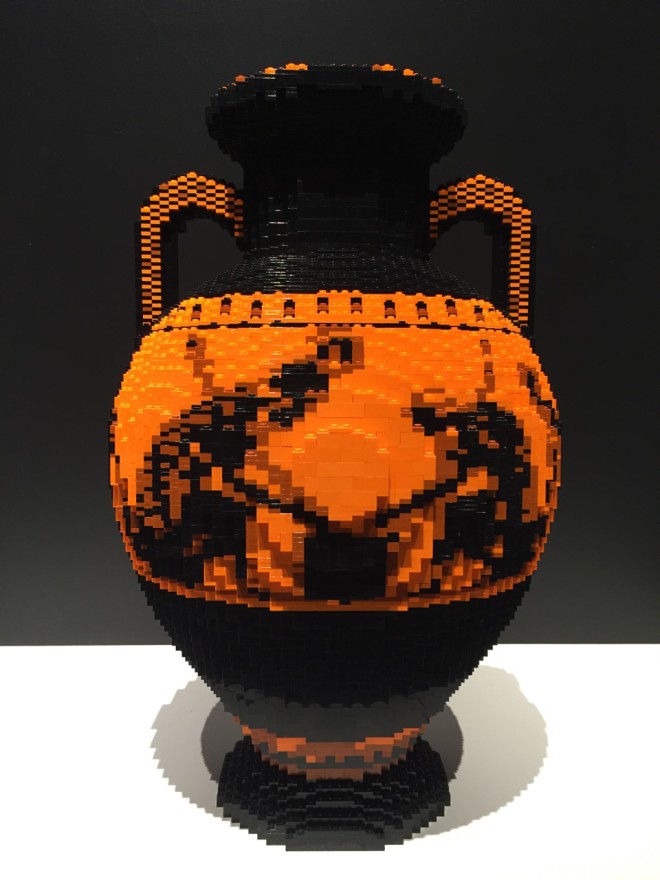 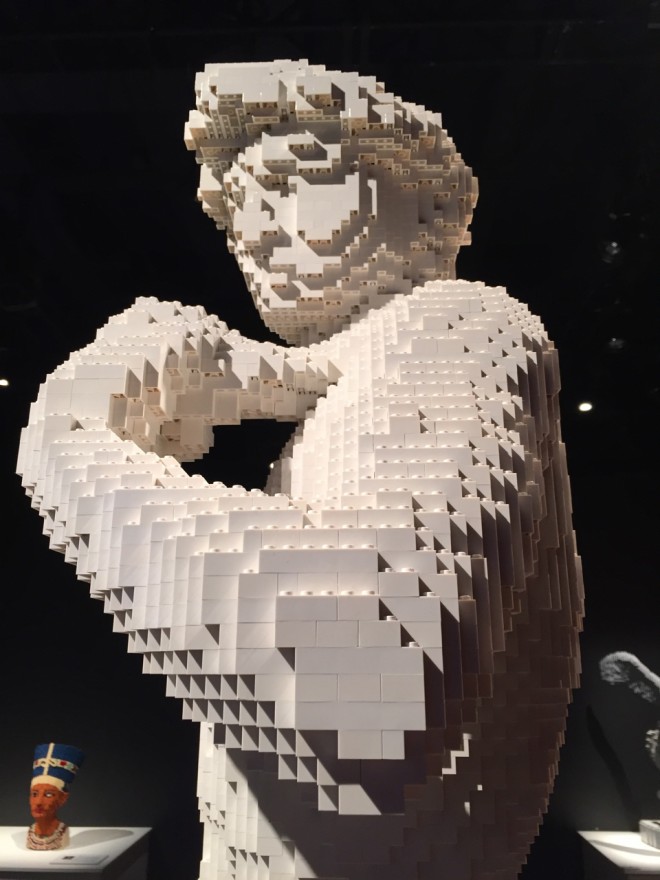 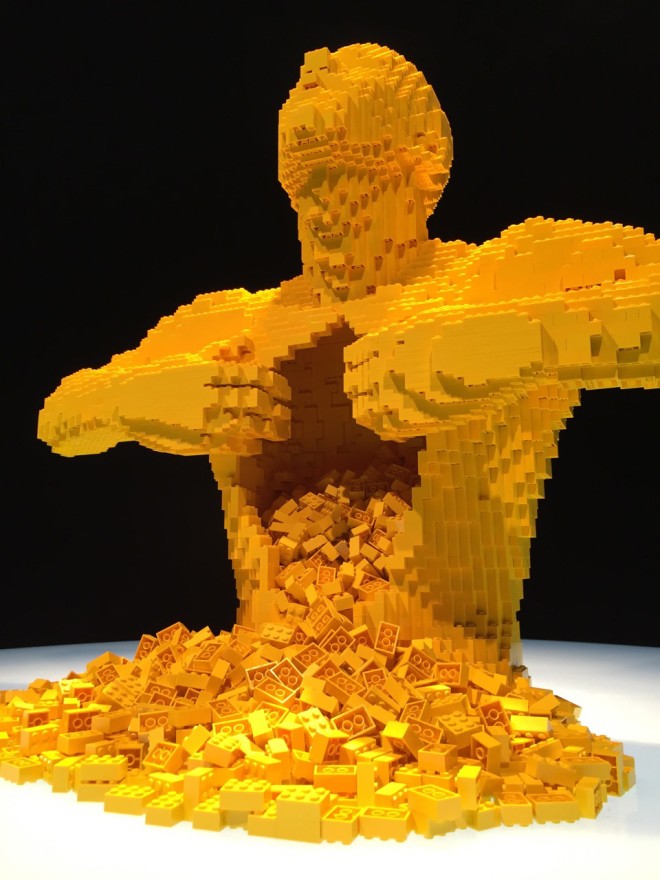 From there, the exhibit ranges into recreations of every objects and portraits made from Lego. One of the middle rooms features a lot of figurative Lego sculptures, each with little stories and observations behind them. 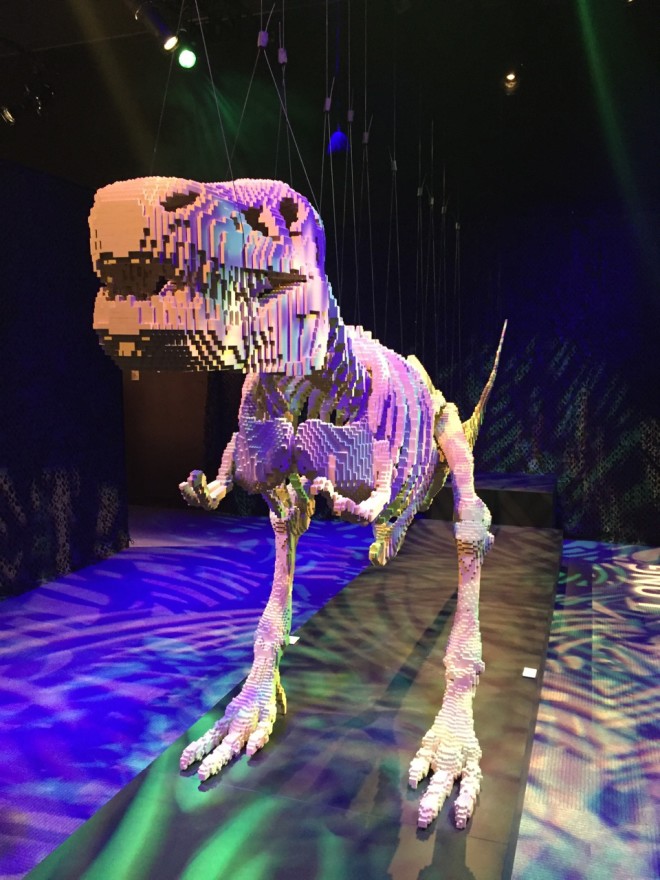 One room features a dinosaur skeleton made from over 80,000 bricks!

One of the last rooms is a combined Lego/photography exhibit. Sawaya created objects and even costumes from Lego, which were then used in photography pieces. The room includes the prints and the Lego objects themselves; our boys went from piece to piece, identifying the object in each photo.

The exhibit is really magnificent. When you really take time to look at each piece, you come to recognize the detail in them. You realize that each piece isn’t just stacking Lego bricks on each other, but how much planning, vision, and mathematics are involved! Our boys loved it so much we actually doubled back and explored the whole thing again. 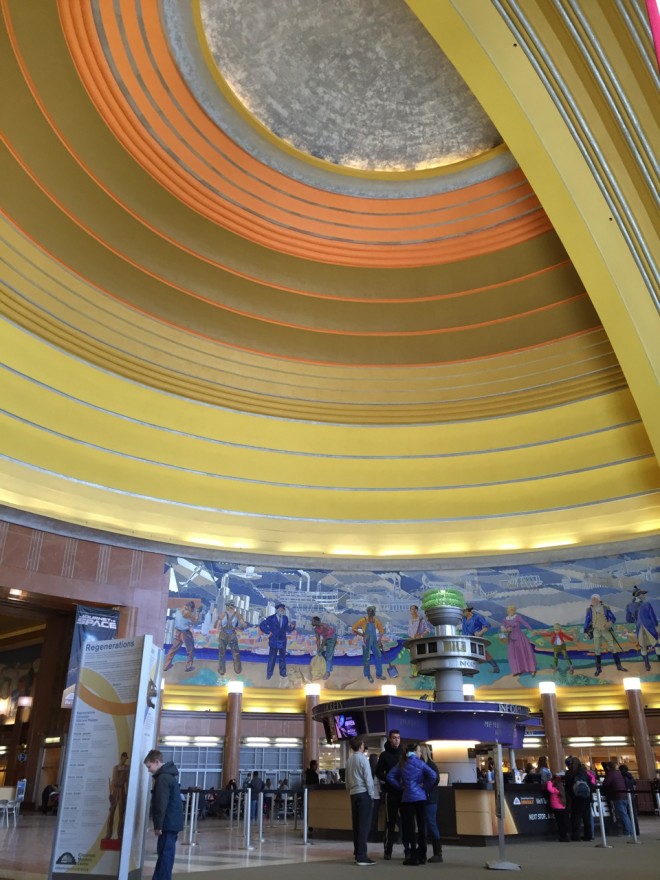 And then there’s the Union Terminal itself. The size is just mind-boggling. I could have spent half a day just exploring every Art Deco detail in that building. Photos just can’t capture the scope of it. 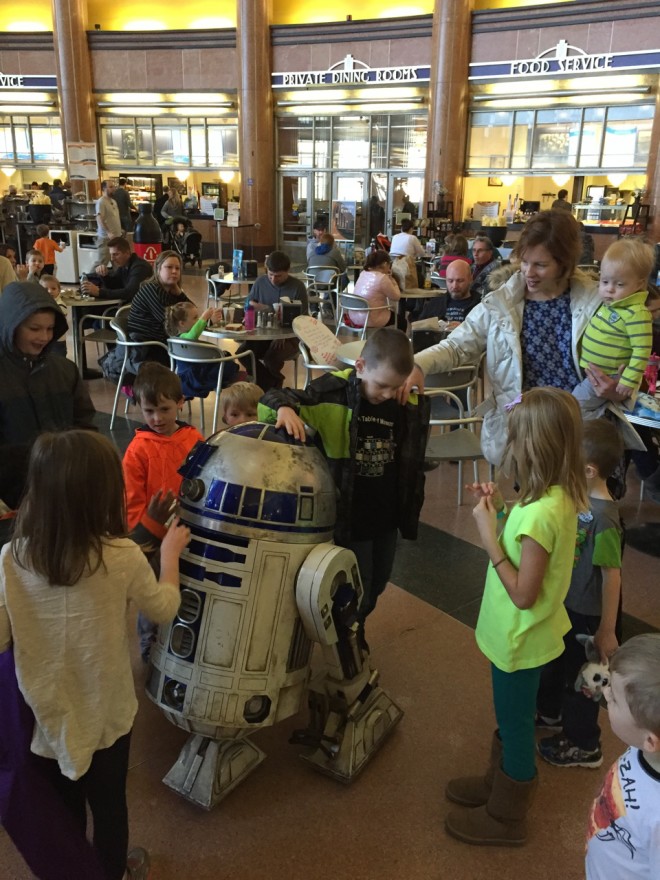 Back in the terminal building, we found R2D2 rolling around, playing music and interacting with the kids. It’s amazing how detailed he was, and how quickly the kids (okay – yes, and the adults) flocked to him. It took us a second to identify the operator of R2, but we found him, a gentleman sitting at a cafe table with a remote control, secretly entertaining the kids. 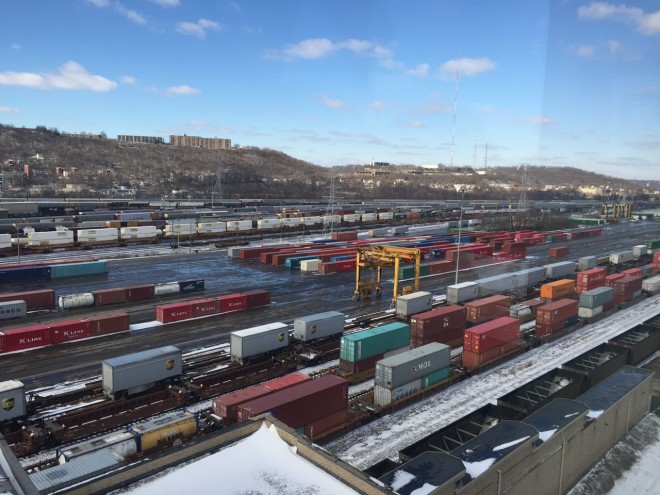 Fortunately for our train-loving family, we explored a little deeper into the building, where we found a volunteer who directed us to Tower A, the original control tower for the train station. We took an elevator up three floors, climbed some narrow stairs, and found us a bit of heaven for our tiny train enthusiasts. Owen (our four-year-old) was particularly smitten by the old equipment and the library of books. The tower overlooks the current freight yard (and former site of the passenger terminals back in the day). 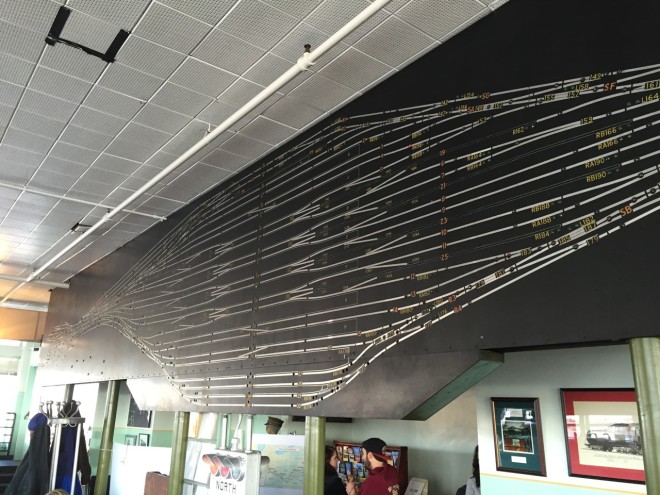 They have a small gift shop and loads of old articles and equipment, including the original control board. 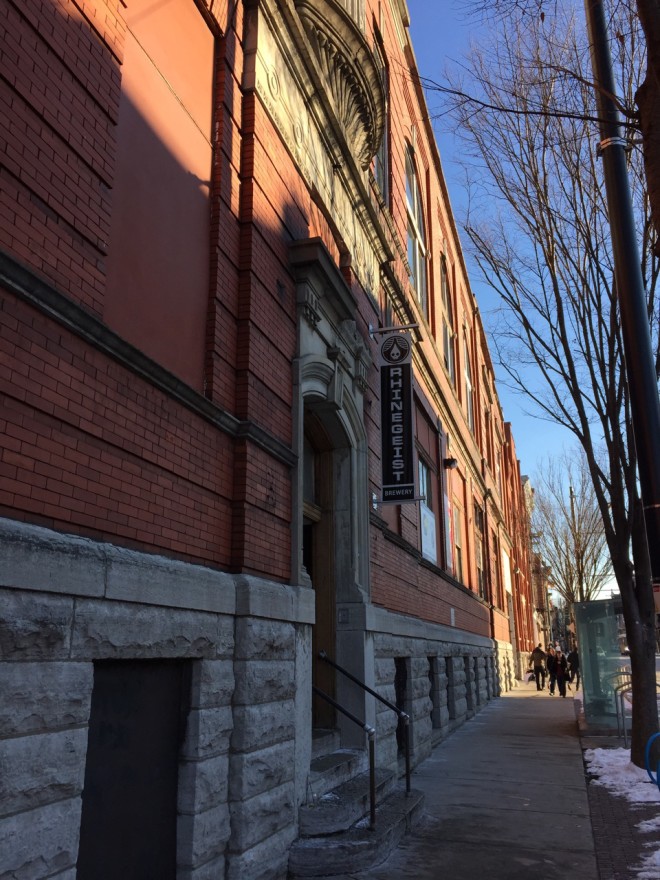 After we spent some time in awe of the train yard, we checked in to the hotel. It was still too early for dinner, so we headed to Over-the-Rhine to visit Rhinegeist. In a few short years, the brewery has expanded considerably; they now have a solid presence in the Columbus market. 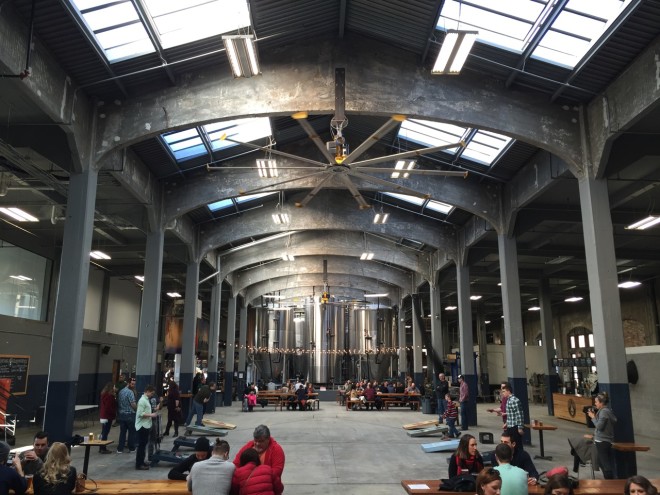 If you’ve never been to Rhinegeist’s space: go. That’s all I can say. We have a lot of great breweries in Columbus, but I wish we had something like this. The big old warehouse building on Elm Street has been slowly converted to house the brewery, taproom, and event facilities. The best thing about it is how relaxed it all is. We felt totally comfortable bringing our boys there (in the afternoon, not at night, obviously). There’s space to just hang out and chat. There are games. There are tables where the boys sat and colored. 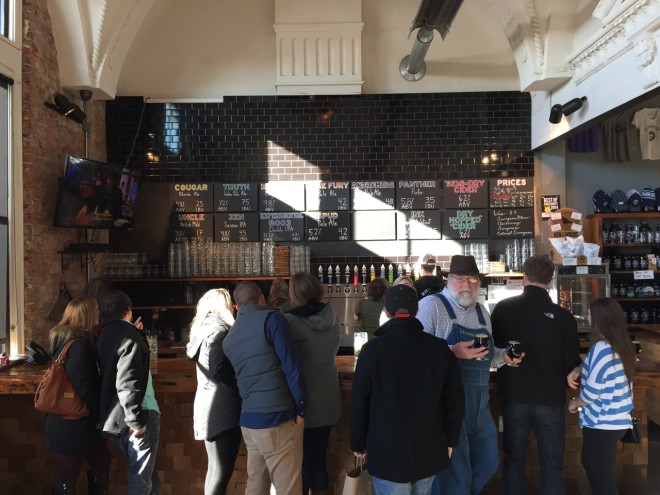 There’s a small bar off to one side. The selection includes Rhinegeist mainstays and some specialty brews 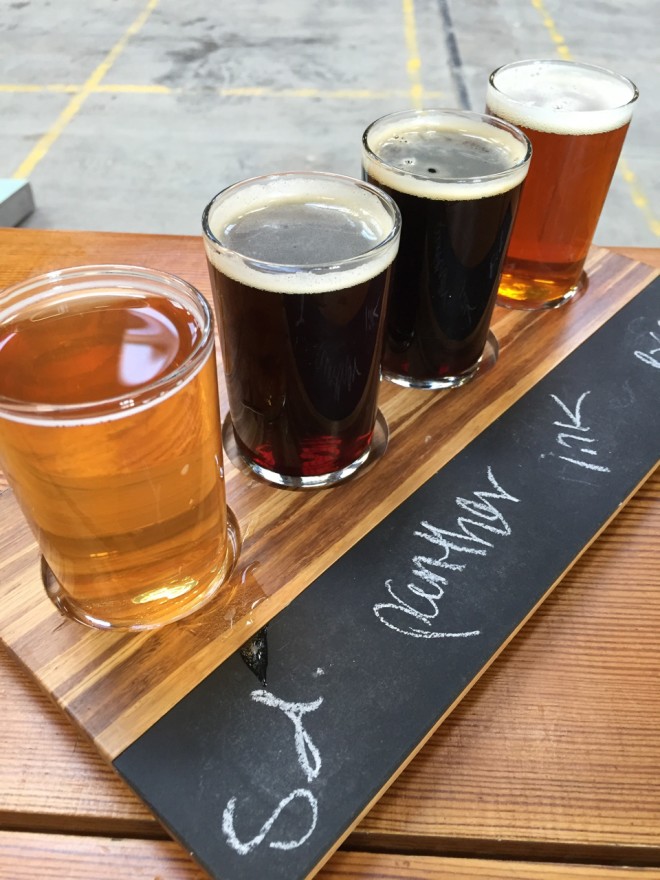 We split a sampler of four beers: the Semi Dry Cider, the Panther porter, Silk stout, and an experimental double IPA. All wonderful, although I particularly love their porter and stout. 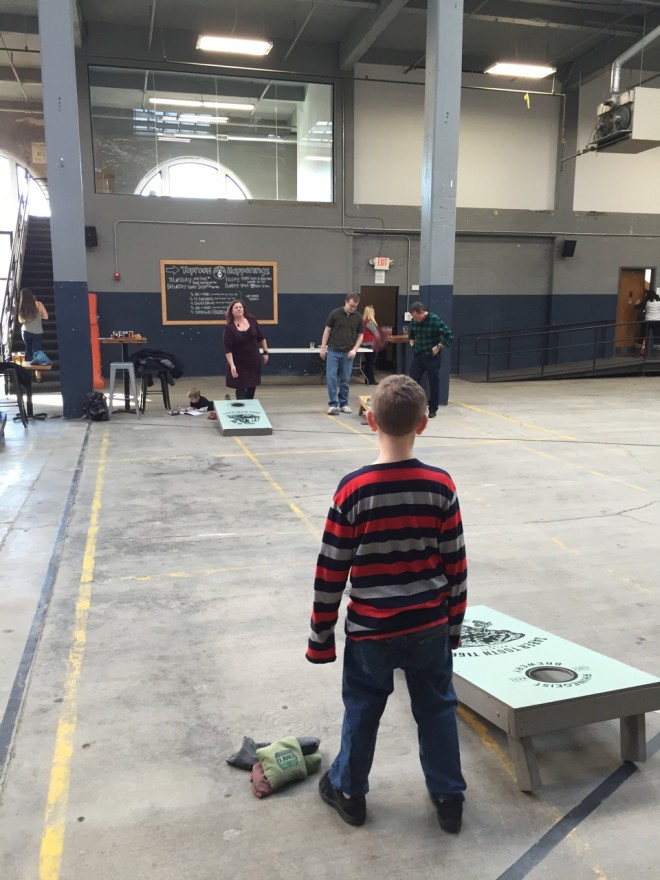 Meanwhile, we took turns playing cornhole and ping pong. Again, the atmosphere is so relaxed. It’s busy, yes, but at this time of day it’s not a crazy drunk bar (not that it is later at night). There’s room to just be. You can sit and enjoy a beer, play games, bring a book, catch up with friends. 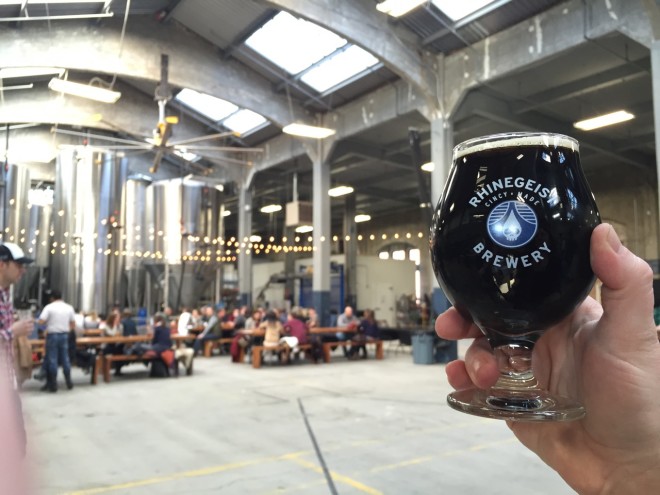 Cheers to a great day in Cincinnati! And we’re just getting started. Read about part two of adventures!

(Thanks to the folks from CincyUSA for providing the Art of the Brick tickets!)