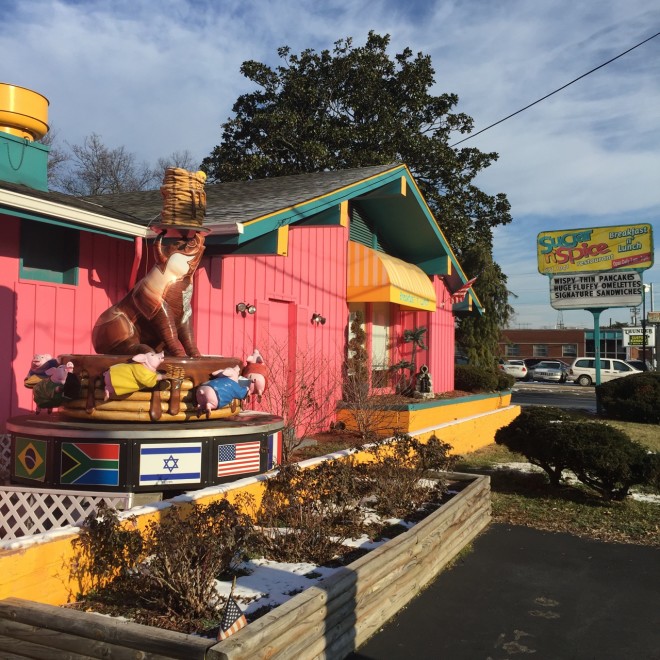 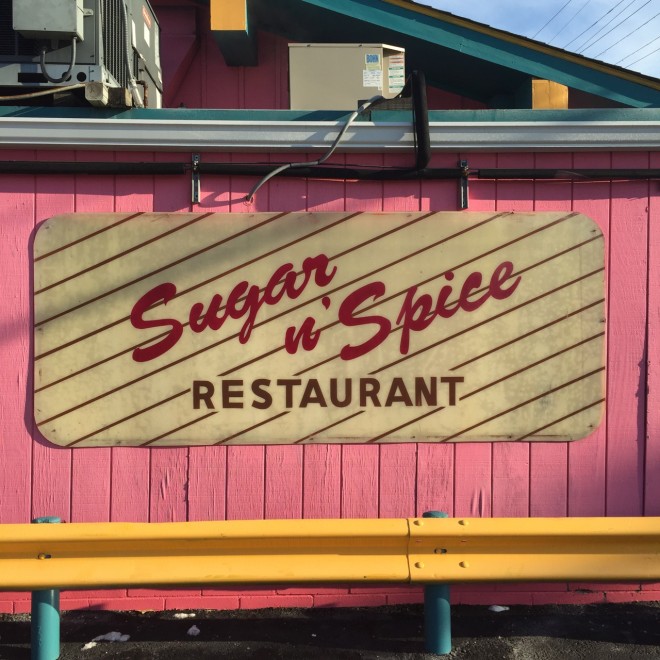 On our recent explorations of Cincinnati, we began our weekend with breakfast at the Sleepy Bee Cafe, then spent the day at the Cincinnati Museum Center and in Over-the-Rhine. Now here we are on day two, visiting another frequent recommendation we’ve had for a Cincinnati breakfast: Sugar N’ Spice. 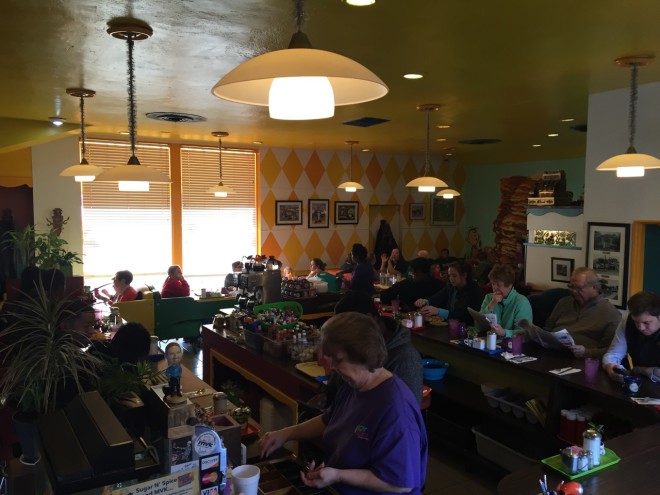 Sugar N’ Spice is best described as a bright and colorful diner. I said that Sleepy Bee Cafe was commendable because they knew their DNA, meaning their know and embrace their identity, and Sugar N’ Spice is just the same. They take the colorful, welcoming, family friendly, comfort food angle and they run with it. 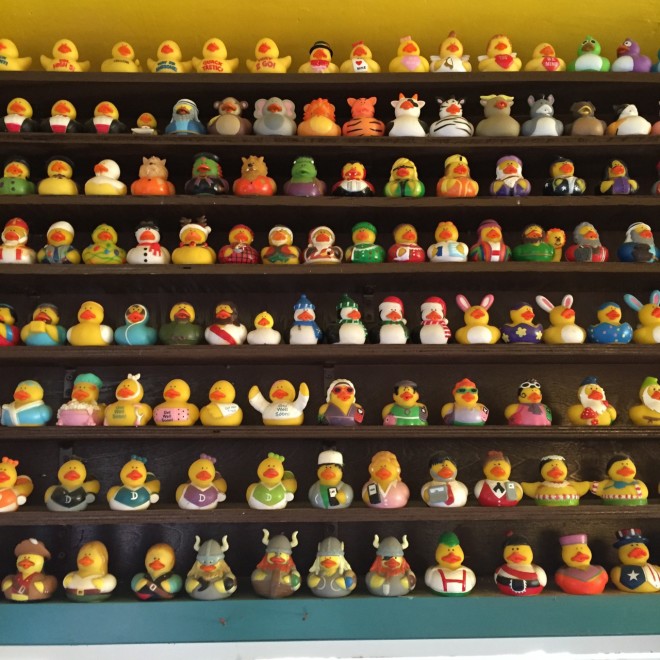 Case in point: the collections (plural) of rubber ducks lining the walls. 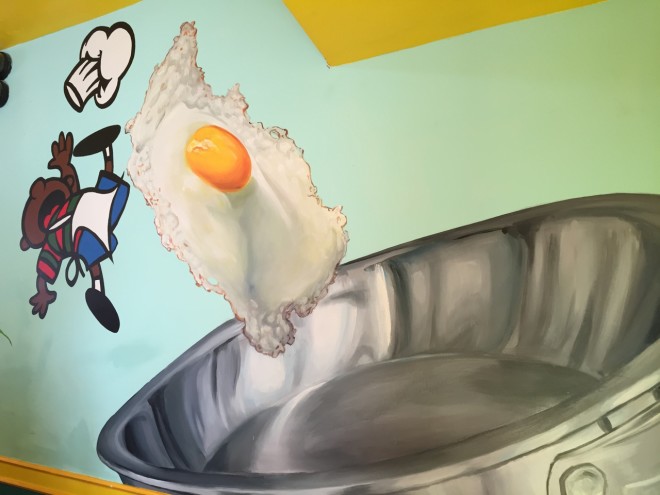 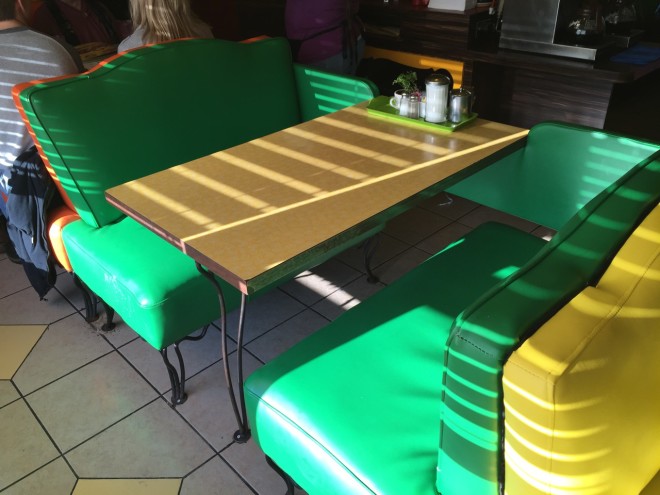 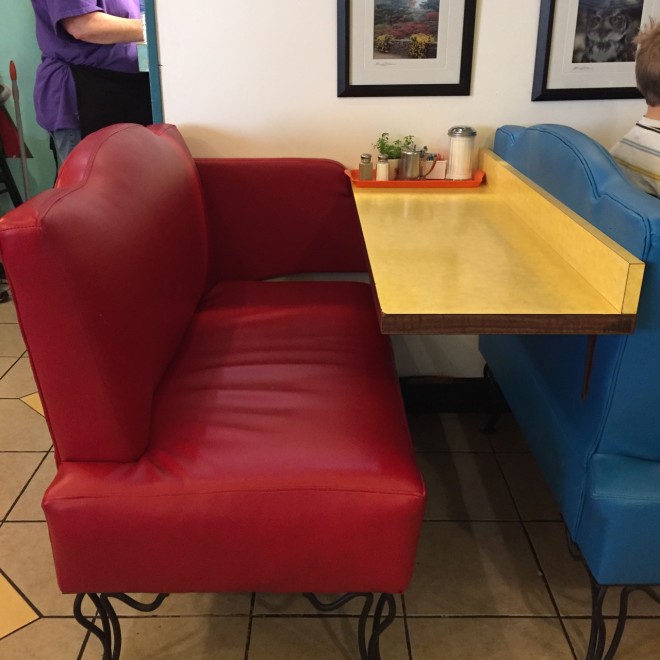 Or the funny half booth for two. 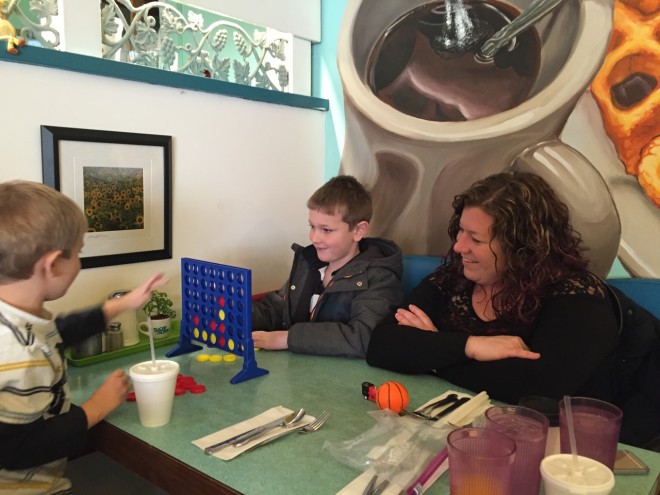 Or the fact that, when our boys were clearly getting hangry, one of the servers dipped into a box of games and brought us Connect Four. 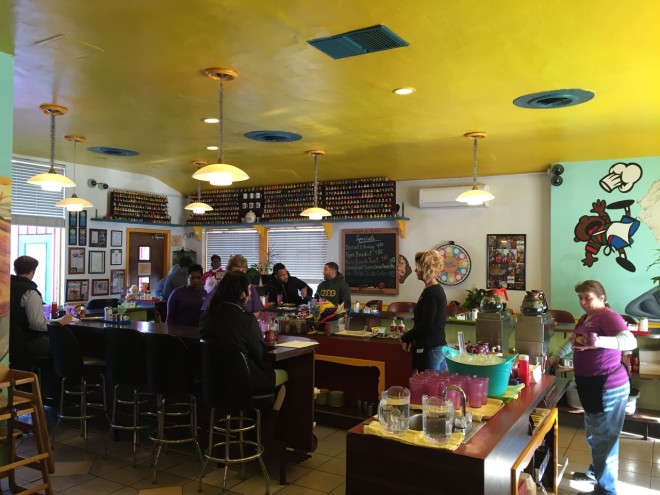 Yeah, Sugar N’ Spice knows what they’re all about. 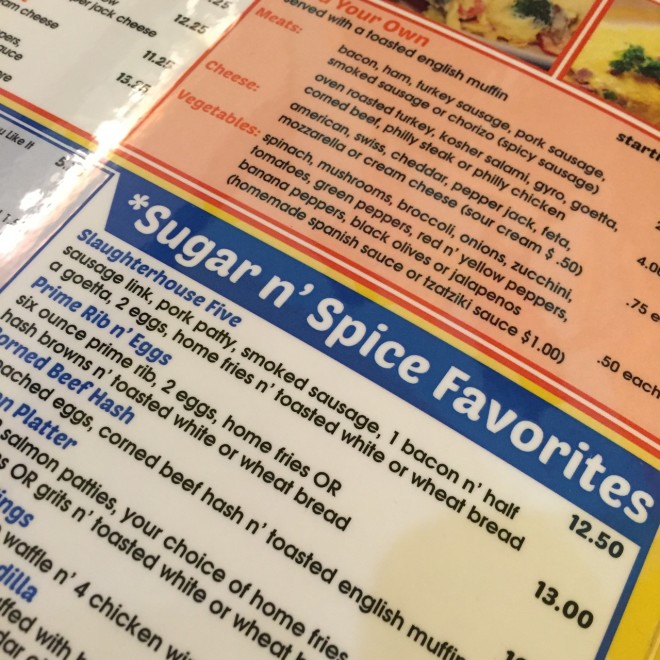 In addition to all the above, they’re also all about comfort foods. The choices are plentiful: all you can eat platters, omelets, waffles, “wispy thin” pancakes, breakfast sandwiches. 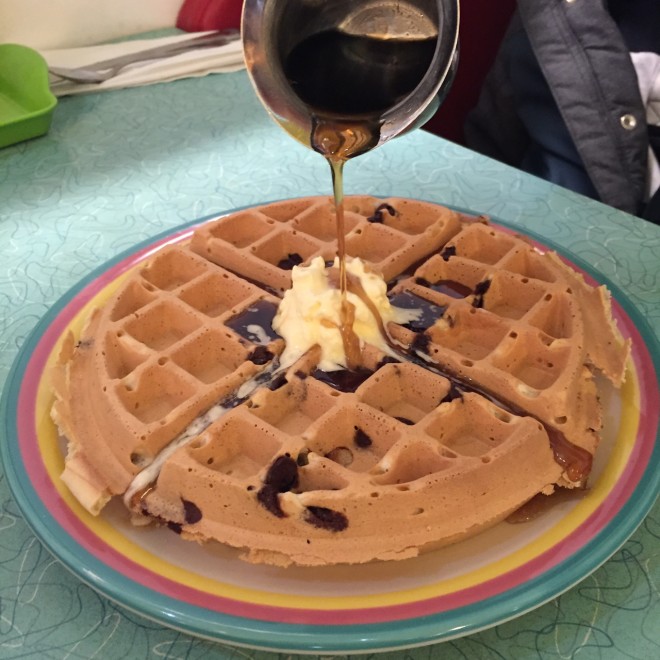 Our boys heard the phrase “waffles with chocolate chips” and could think of nothing else. 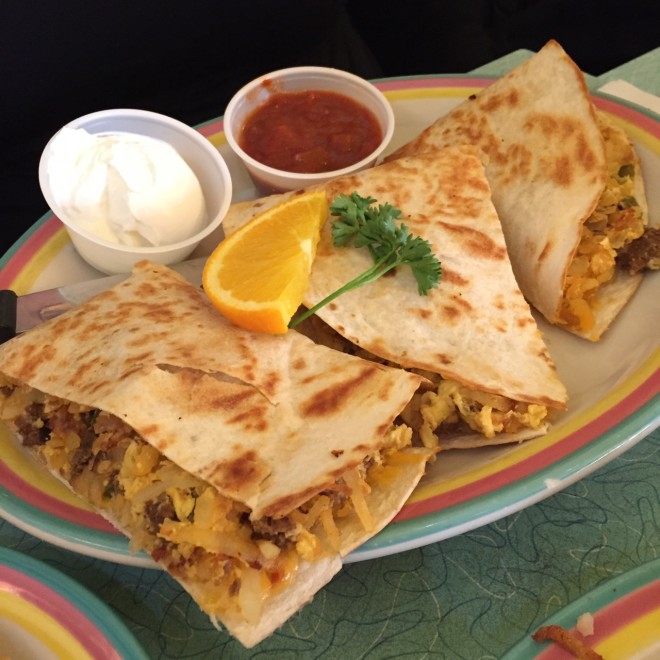 Mrs. Breakfast With Nick ordered the breakfast quesadilla. It was very nicely done: hearty without being overloaded or crumbling apart. Nice additions of crispy hash browns and chorizo. 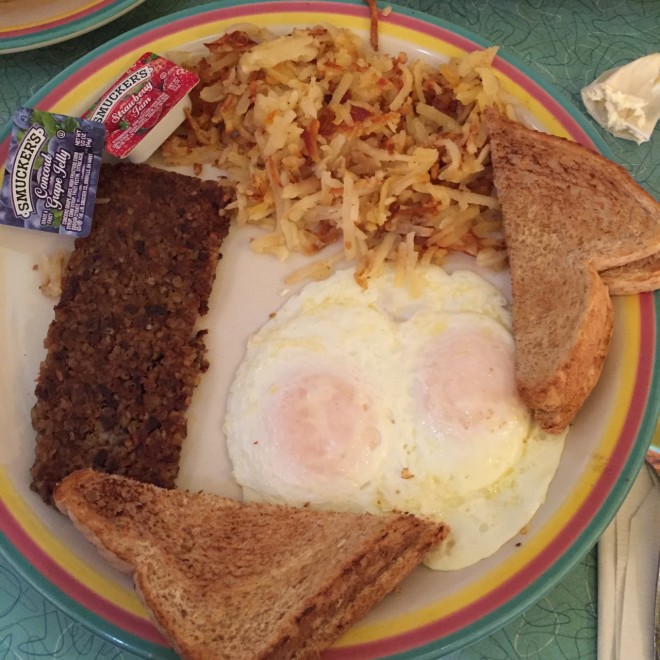 I went with the general breakfast platter. All of it was done well: over easy eggs, hash browns, toast, and a big piece of goetta. The goetta was on the dry side, but the runny egg yolk made for great dipping. 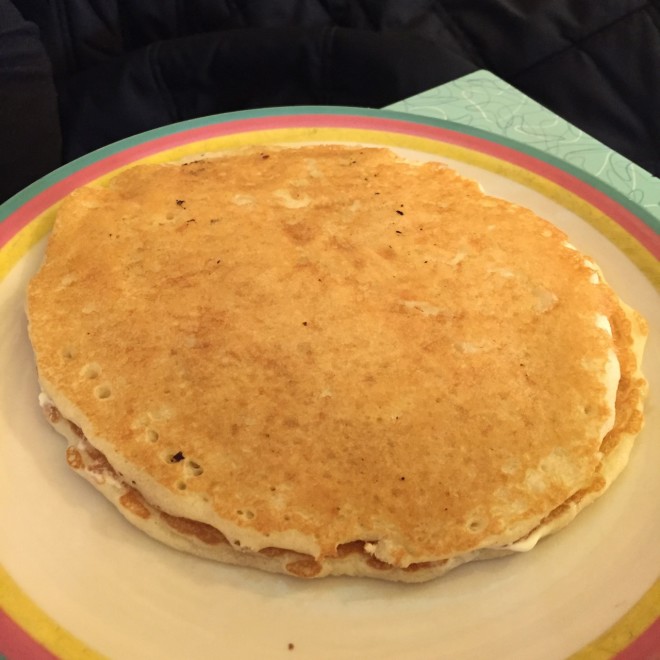 We also ordered a side of the wispy thin pancakes, which are advertised everywhere: at the top of the menu, on the sign out front. They were definitely thin, with a little a crisp to them, and very buttery. 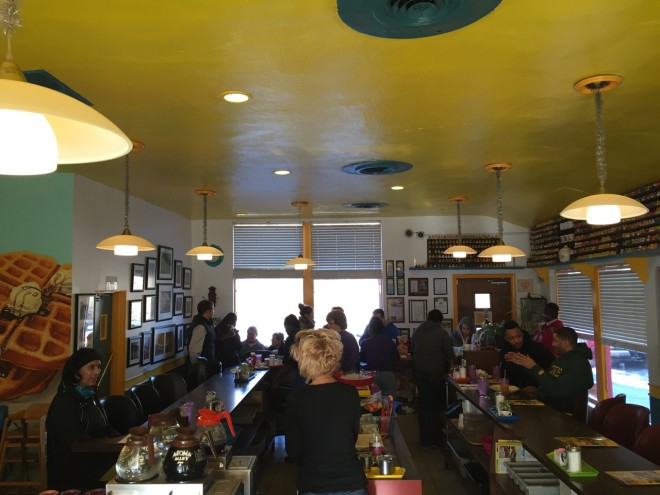 Sugar N’ Spice was quite the contrast to the Sleepy Bee Cafe, but just as lovable. They have their thing and they do it really, really well. And given that Sugar N’ Spice has been open since the early 1940s… well, they’re doing something right. The best part of the experience – and the tell-tale sign of a great restaurant – were the regulars piling in, grabbing their seats at the counter, and joking with the servers.

Bada Bean Bada Booze Offers the Best of Both Worlds