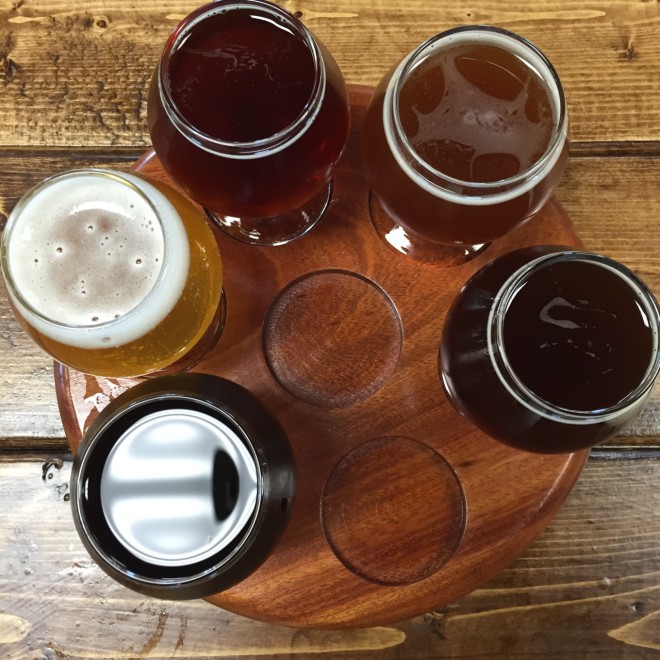 The Columbus Ale Trail Volume 2 launched a couple weeks ago during Columbus Craft Beer Week. For those who don’t know what it is, the Ale Trail is a passport you can get from any local brewery or from Experience Columbus’ visitors centers. You visit the breweries, enjoy a pint or two, then get a stamp on your passport. Collect four stamps and you earn a commemorative pint glass at one of the visitors centers; visit all 28 (!) breweries and you can get a limited edition deck of Ale Trail playing cards. 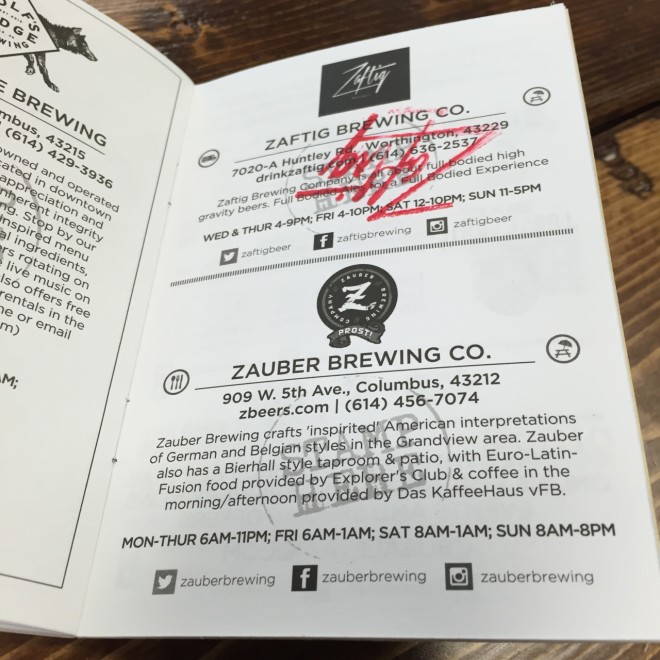 Last year there were fewer breweries on the list, and I barely made it to half of them. Or, I should say, I made it to at least half of them but I constantly forgot my brew book. This year, I’m determined. We have until April 30, 2017. I’m going to get to all 28, and I figured I’d blog the adventure along the way, every time we visit four more stops. 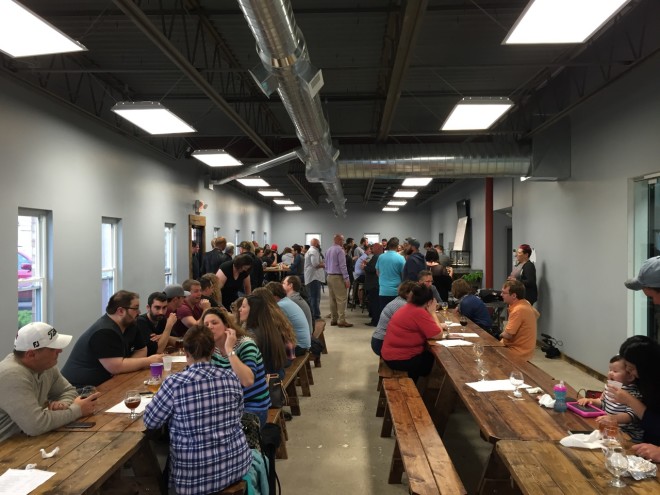 We collected our first stamp at Zaftig Brewing, during the grand opening of their new taproom and brewery in Worthington. They graduated from a small industrial storage space with a few couches and card tables to a fully fledged taproom and a brew system ten times the size. It’s a huge leap for them. 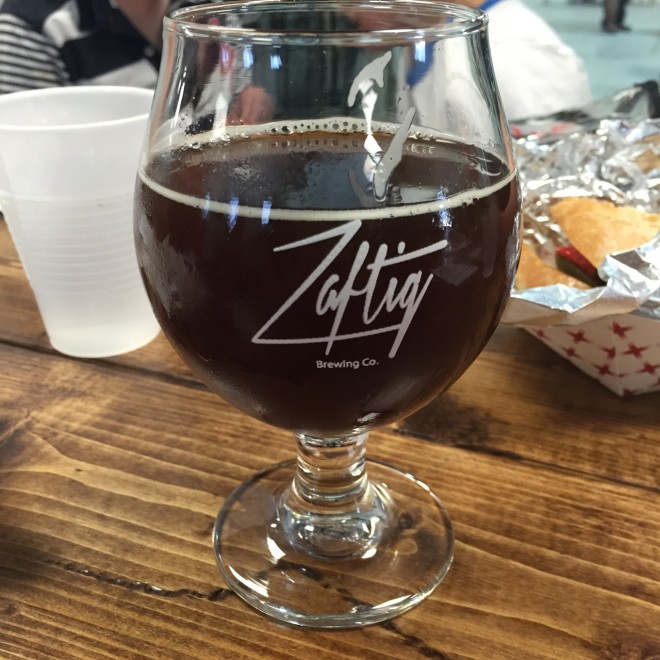 Zaftig’s name is Yiddish for “full bodied,” and their beers follow that theme. Their most sessionable beer is a 7% ABV IPA. During the grand opening they featured all sorts of beers that had been aged in bourbon or brandy barrels. Their beers are big, warming, and perfect for sipping. Of any central Ohio brewery, I think Zaftig will benefit the most from the recent passing of House Bill 37, which eliminates the cap on alcohol by volume for beers produced and sold in Ohio. 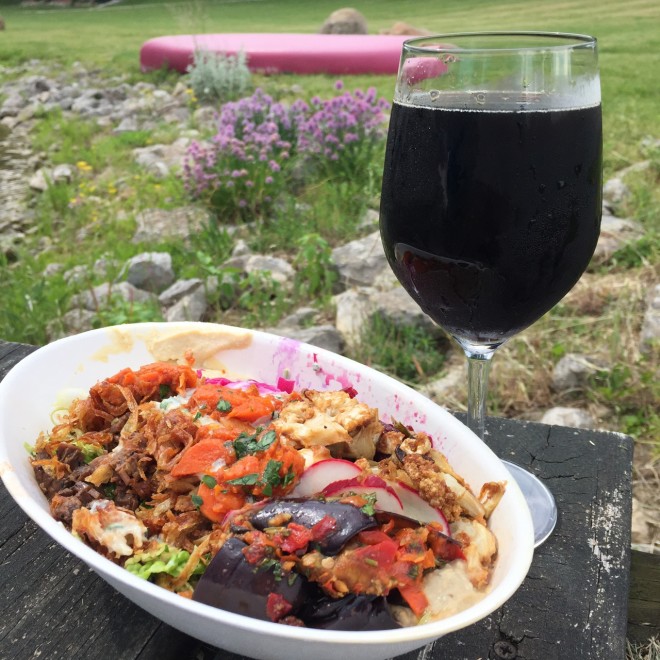 Stop number two was our happy place: Rockmilll Brewery in Lancaster. We’ll find any excuse to pick up Brassica and drive down to Rockmill. We love the cozy, campfire-smelling taproom and the expansive grounds. Our boys love it, too. They bring soccer balls and frisbees, and they run off into the woods. 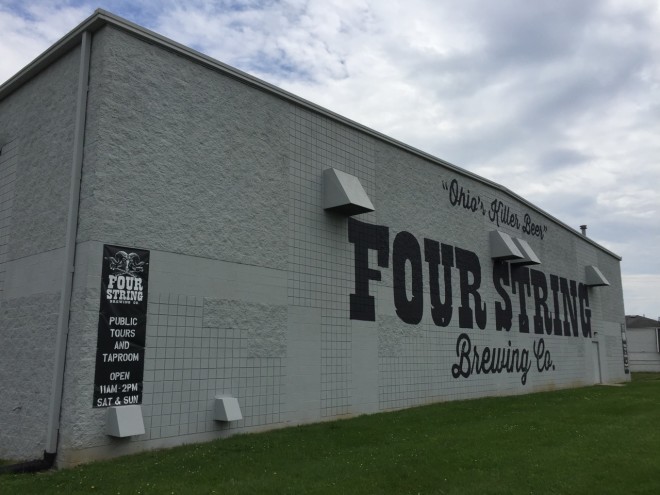 Stamp number three for me was Four String Brewing‘s new taproom on the west side, at their production facility on Hague Avenue. 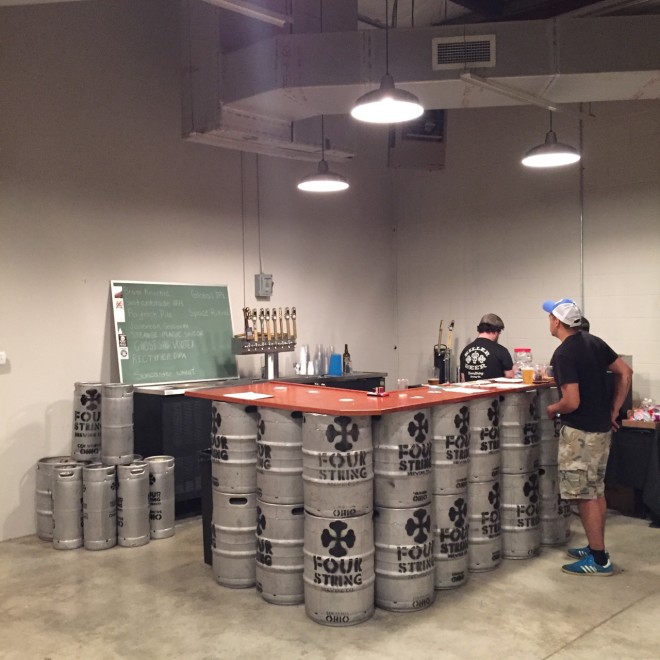 The facility is a huge expansion from their Sixth Avenue spot in Grandview (which is still open and is worth another stamp if you visit it). The Hague Avenue taproom is a good size, with about ten of their beers on tap. 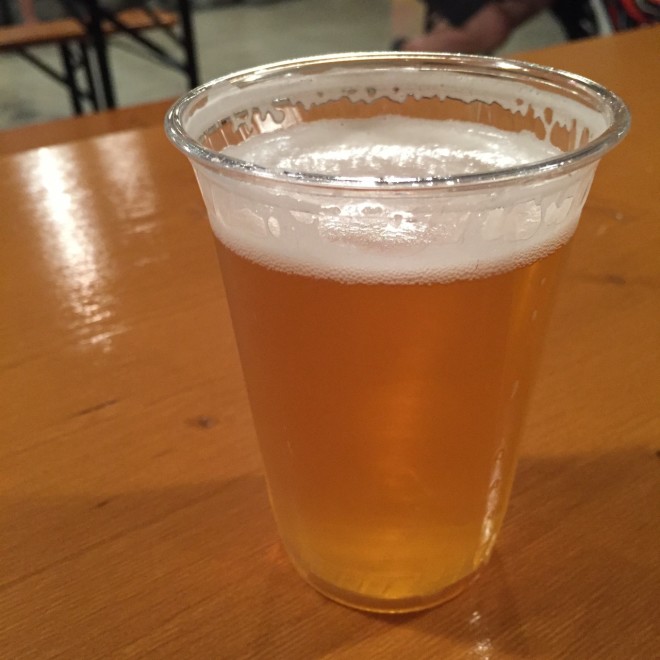 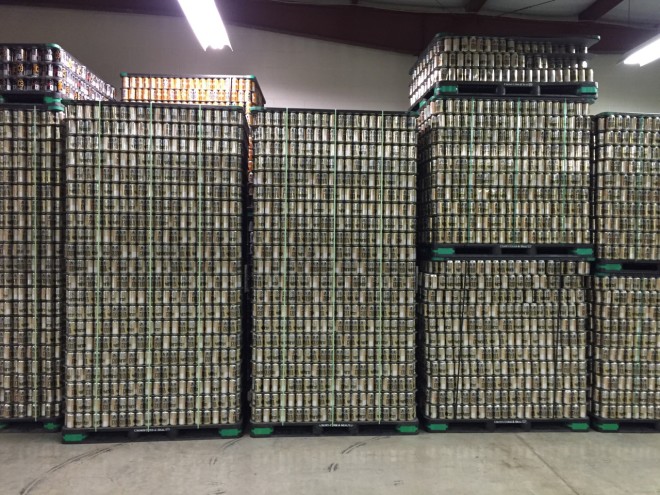 I didn’t know at first, but they also lead short tours of the facility. One of the bartenders collected the ten of us in the taproom and took us on a stroll. We saw the wall of cans waiting to be filled. 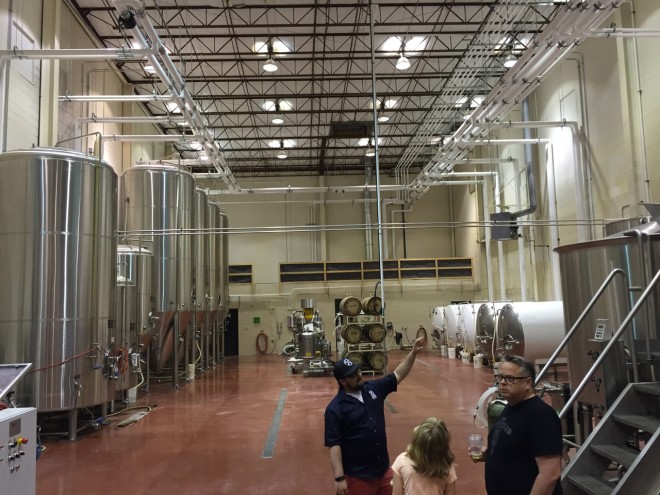 And walked into the brewery itself. I was stunned at how much they’ve expanded. To give you a sense of where they started, look at the five white containers on the far right. 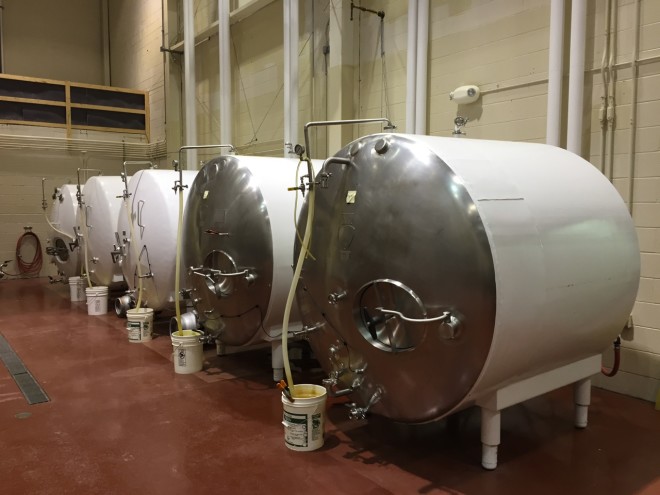 These are the modified dairy tanks that Dan Cochran used to start Four String a few years back. He used to brew everything out of the Grandview taproom. 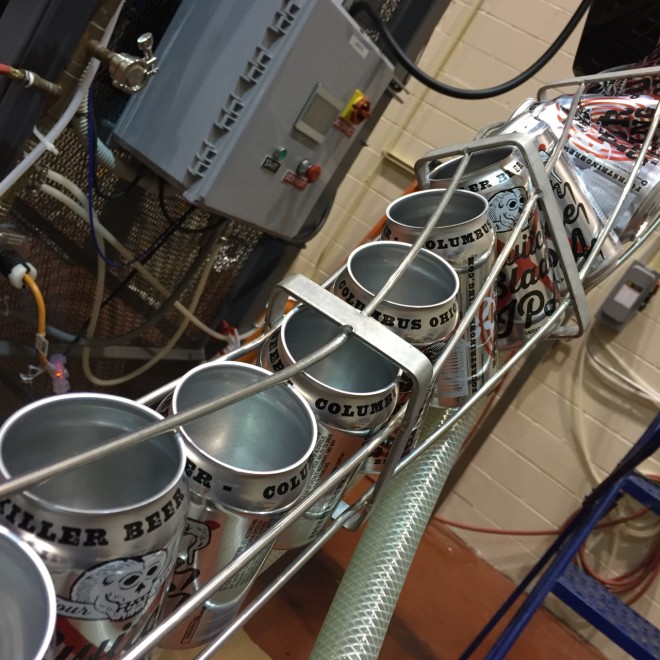 Four String also has its own canning line. I love the availability of their beers all over Ohio now.

Quick note: the Grandview taproom is open Wed-Sun, but the production facility taproom is only open Saturdays and Sundays, 11a-2p. 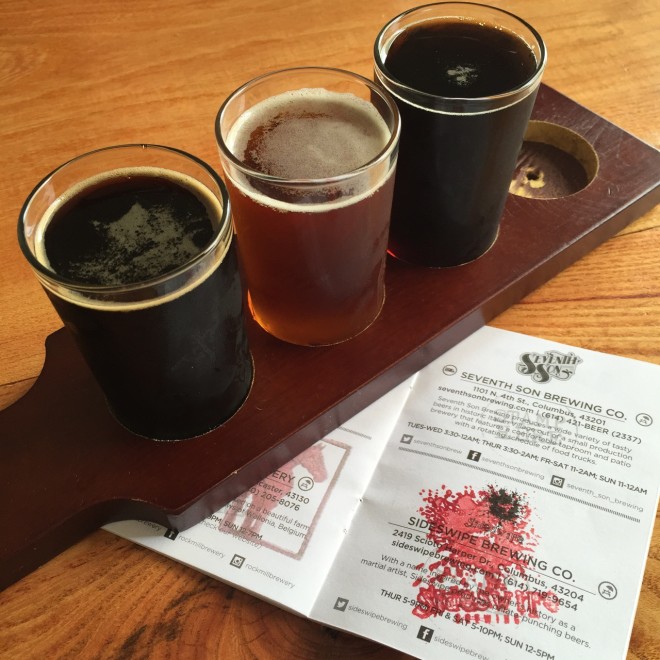 I collected stamp number four that same afternoon at Sideswipe Brewing’s upgraded taproom. Sideswipe is about five minutes from Four String. Like Zaftig, they started in a small industrial storage space, and just recently owner Craig O’Herron took over the space next to him to expand both the brewery and the taproom. 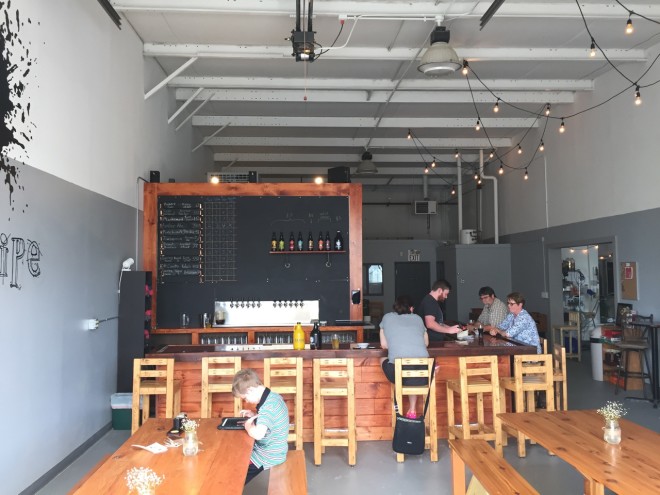 The new taproom is nicely appointed: a big bar, picnic tables, and a small tent covering the “patio” out front. They sell samples, pints, growlers, and bottles. 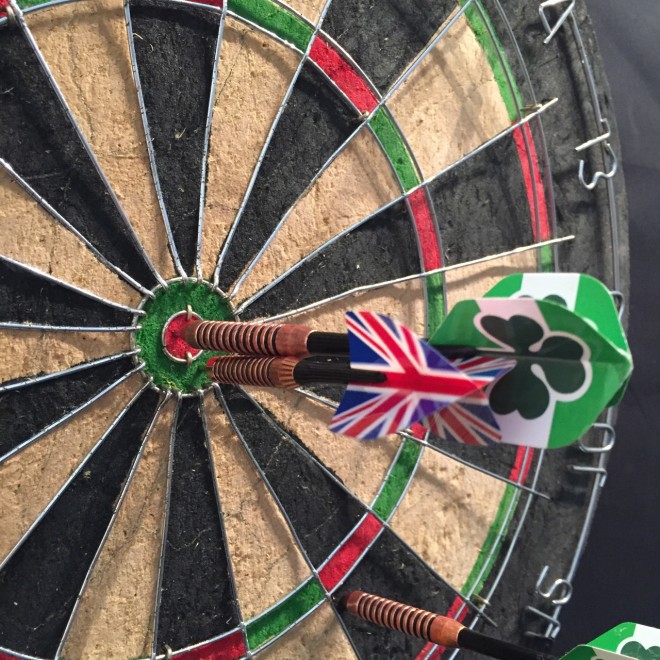 There are board games, a foosball table, and dart boards in the back. It turns out that Will and I are both pretty decent at darts.

Four down. Twenty-four to go.

You should try the Ale Trail yourself: learn more about it at cbusaletrail.com. Pick up a book at any central Ohio brewery or at Experience Columbus, and start collecting stamps!