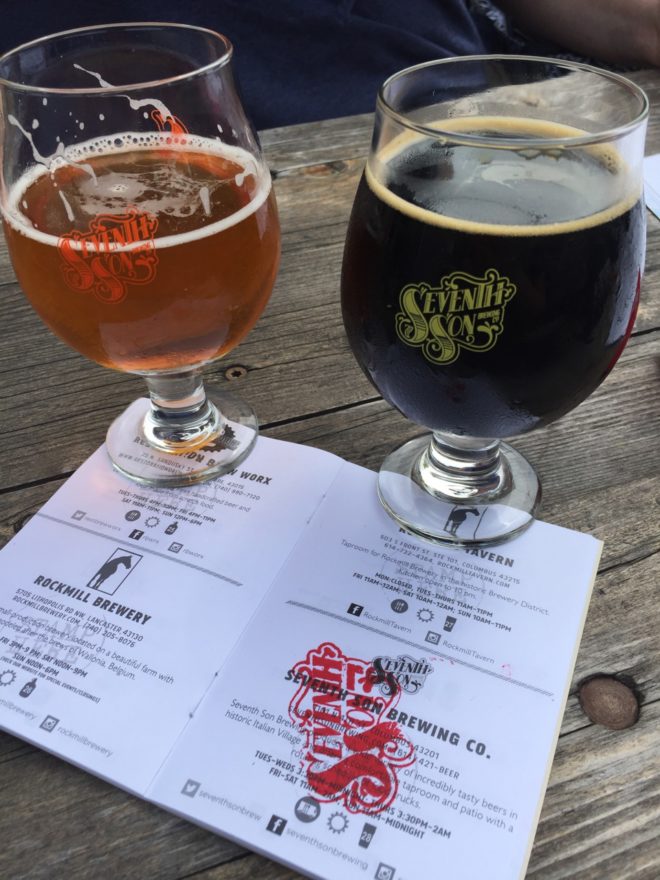 Last year I attempted to complete all 28 stops of the Columbus Ale Trail, making good progress but ultimately finishing 22 of them. I put pressure on myself last year because, I figured, if I didn’t get it done then I never would. Why? Because the newest version – Volume Three – has expanded to 37 stops! But then the new brew book came out… and it looks really cool… and I said “But it MIGHT work for us…” and then we found ourselves at Seventh Son sitting out on the patio, clutching our pint glasses and holding our newly stamped books. “This is my year!” I declared. And here we are. 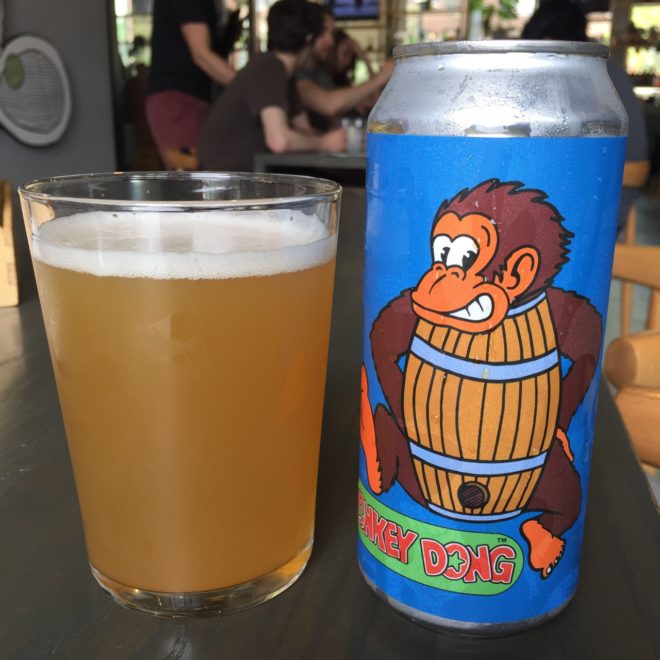 Last year I blogged our journey down the Ale Trail, posting every time we collected four stops. This year, because of the higher volume, I’ll share every 5-6 stops. Stop #1 was Seventh Son, for beers on their patio (which is making way for a brewery expansion and rooftop patio). Stop #2 is Hoof Hearted Brewery & Kitchen – a new stop on the tour this year. I frequent Hoof Hearted on my brunch tour, so it’s fun to branch out and try – what do you know? – some non-breakfast dishes. 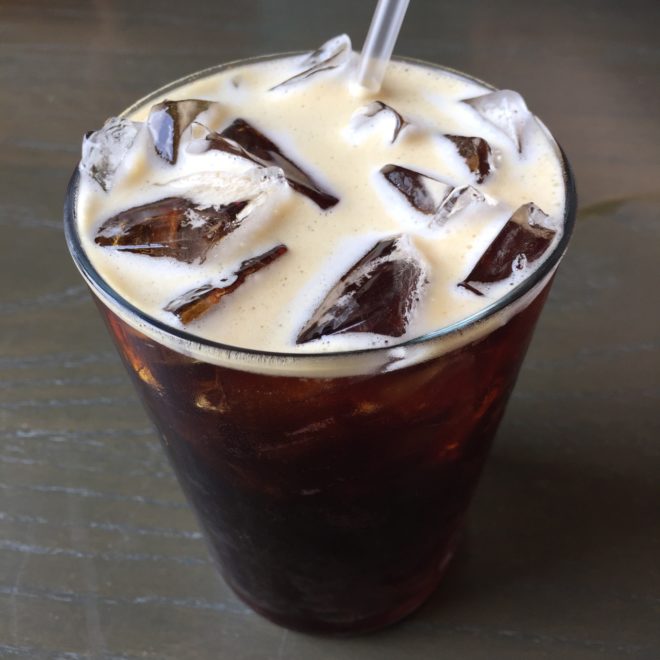 Hoof Hearted also roasts their own coffee and makes a solid cold brew. It’s on tap at the restaurant and often available in nitro cans. 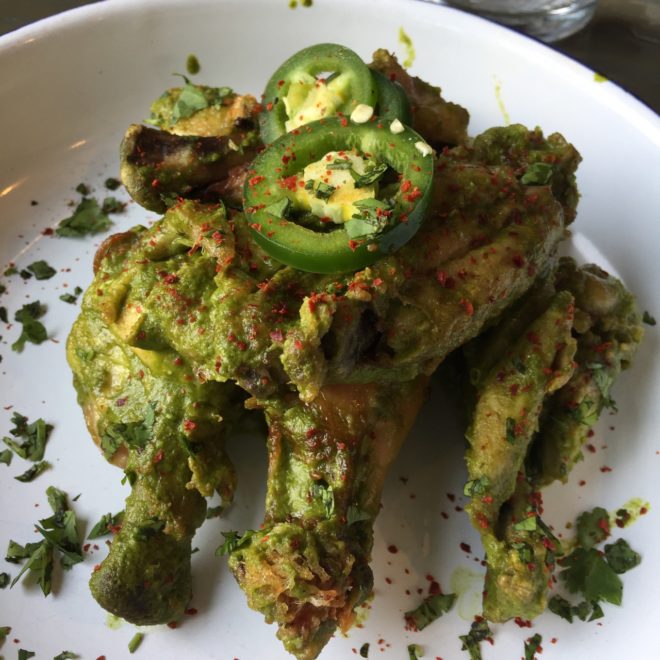 We snacked on wings coated in cilantro and a jalapeno mint sauce. 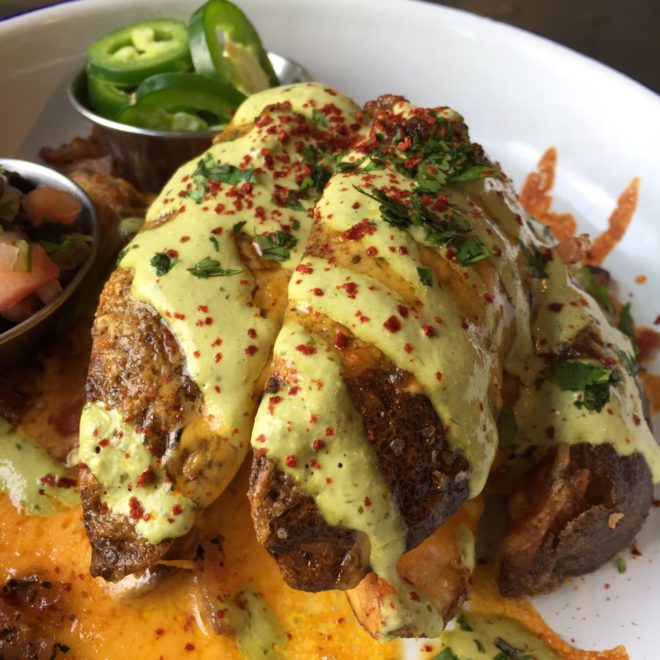 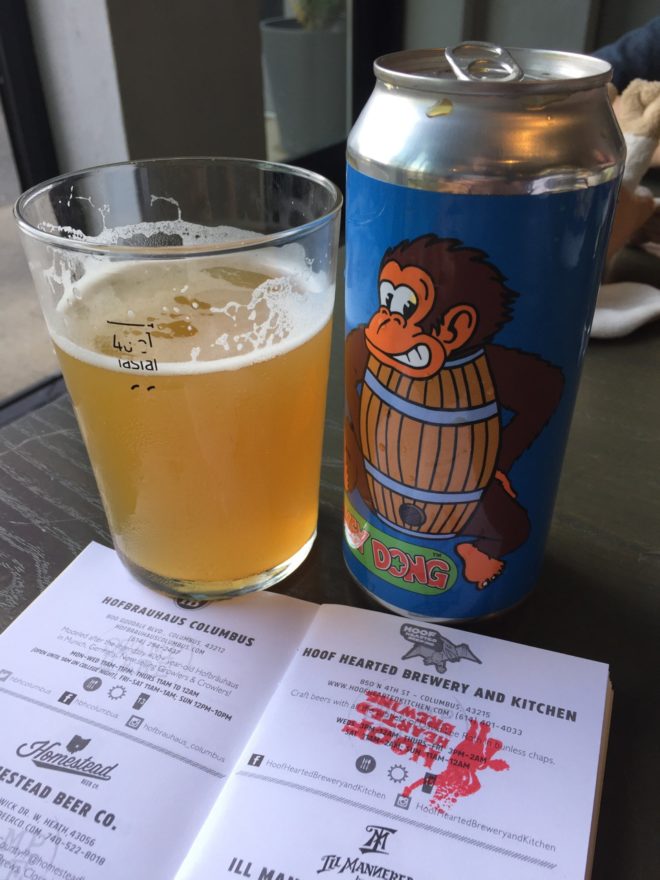 All supplemented by a can of Konkey Dong. 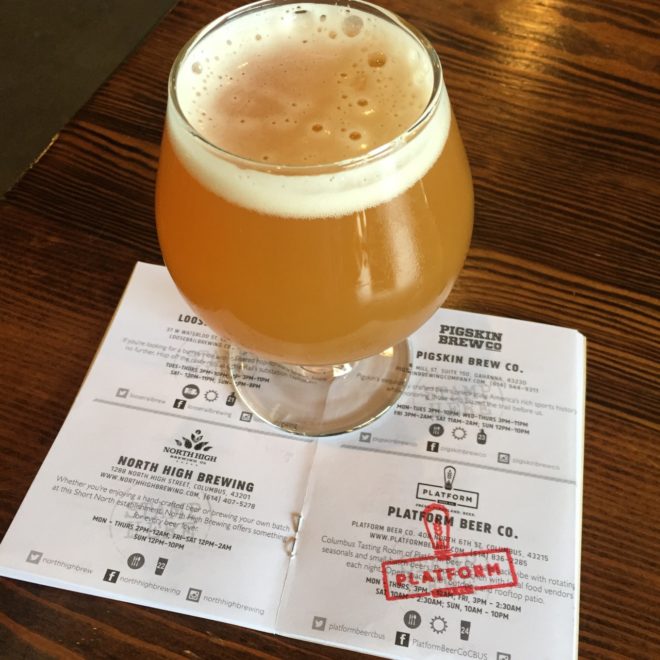 Stop #3 is Platform Beer Co., another new addition to the Ale Trail. Originally based in Cleveland, Platform opened their Columbus outpost last December in an old industrial space downtown. It was the former meat-packing and sauce-making facility for Carfagna’s (read my piece on them in April’s Columbus Monthly). 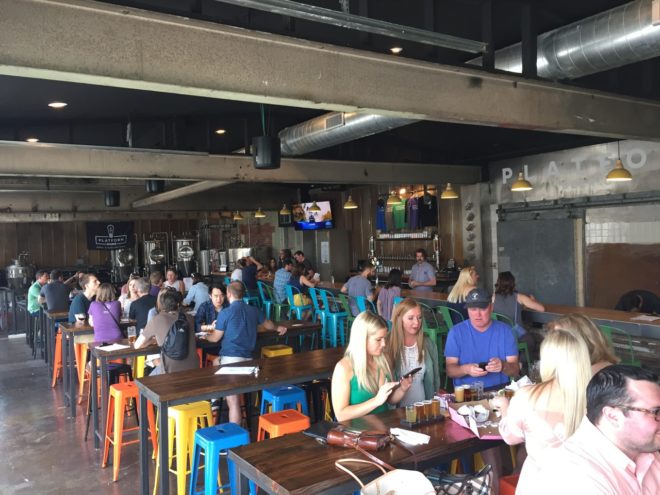 We got to know Platform pretty quickly because of the empanada pop-ups by Isidora Diaz. Platform hosts a variety of food pop-ups, and Isidora made these incredible Chilean empanadas every Tuesday night. Sadly, she moved to Denmark. 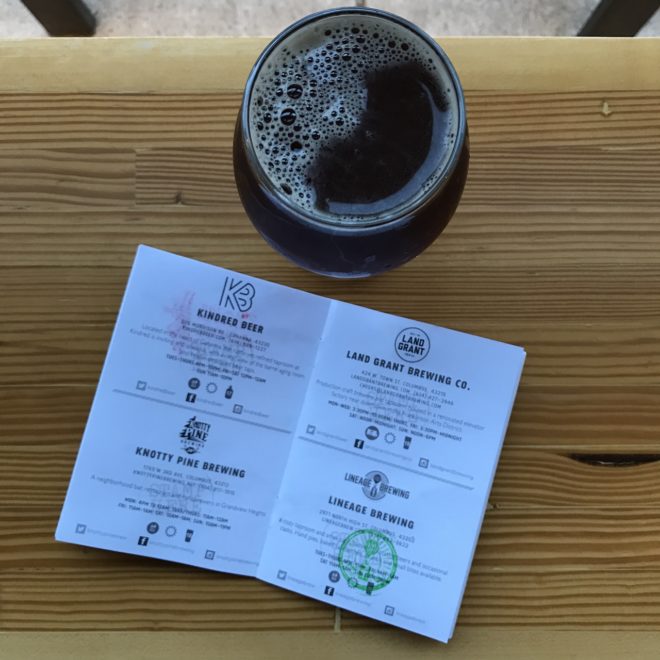 Stop #4 is a quick visit to Lineage Brewing for some writing time and a sip of barleywine. 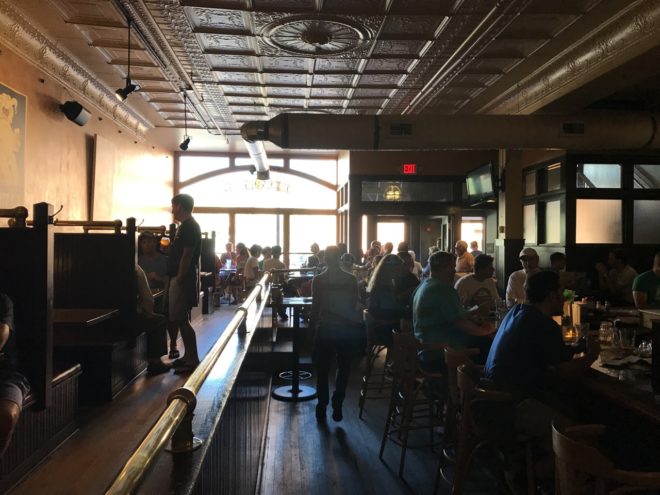 Stop #5 is Barley’s Brewing Company, the first beers we ever had in Columbus, and home to my gateway beer: the Maclenny’s Scottish Ale. 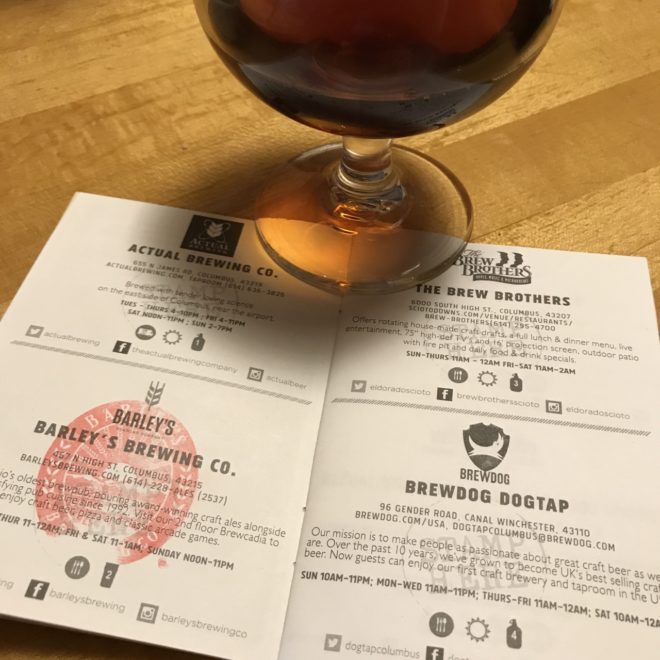 Barley’s is part of the old guard of Columbus breweries, putting in over 25 years of teaching people about craft beer. 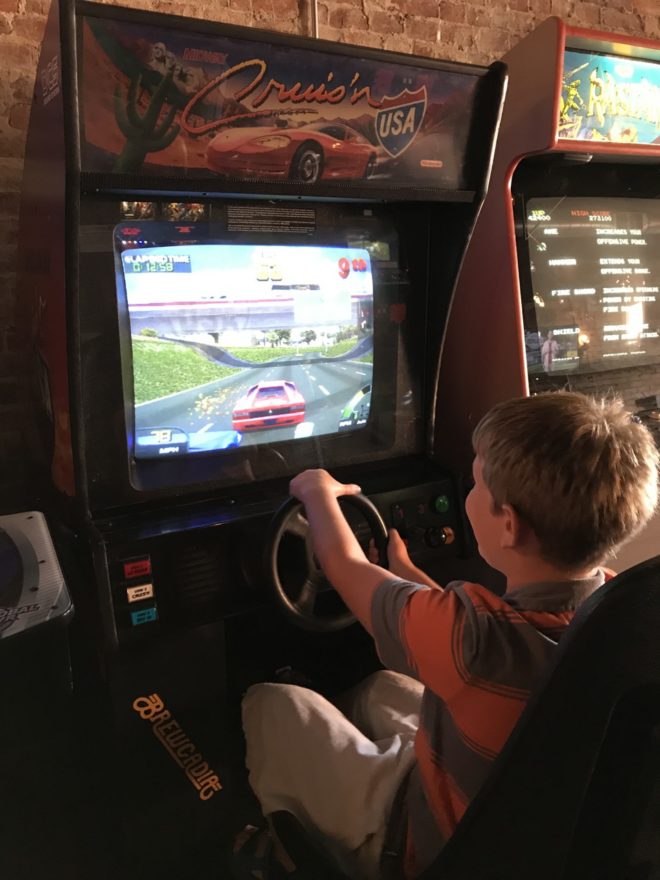 Last year they opened Brewcadia, an arcade and taproom on the second floor of their building. 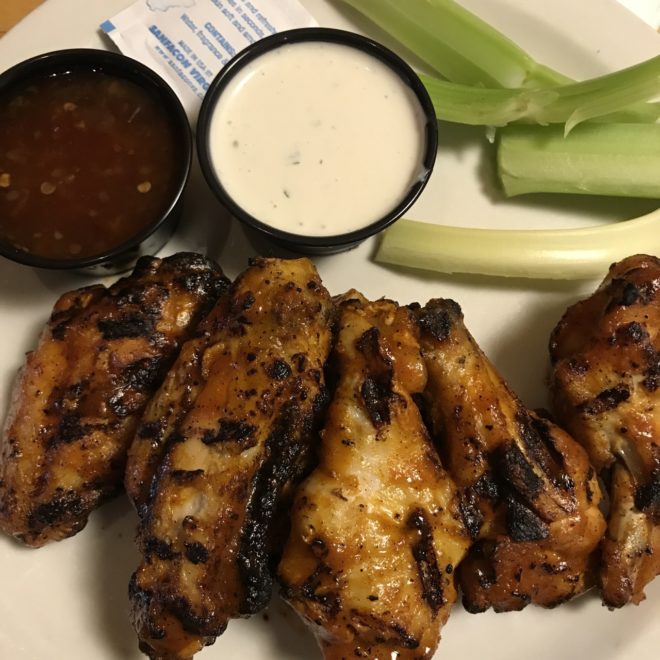 And they have a complete food menu, which they recently updated. The wings are a classic. 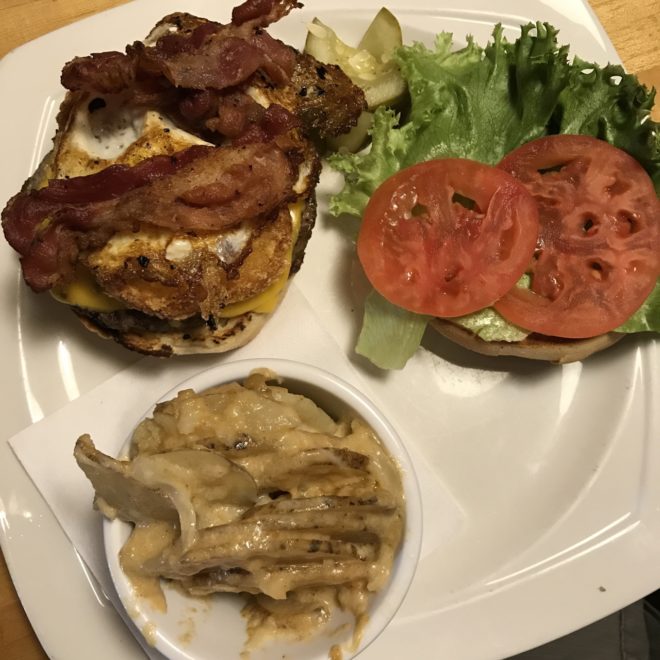 And I couldn’t stay away from the Cure For What Ales You burger, with a brat patty, bacon, hash brown, cheese, and fried egg.

Even if you don’t complete the entire Ale Trail, you should try it yourself! It’s a good excuse to get out and exploring the different corners of the city. Pick up a brew book at any central Ohio brewery or at Experience Columbus, and start collecting stamps! You’ve got until the end of April 2018 to visit all 37 (!) stops in volume three. Learn more at cbusaletrail.com.

Filed Under: Beer
Tagged With: