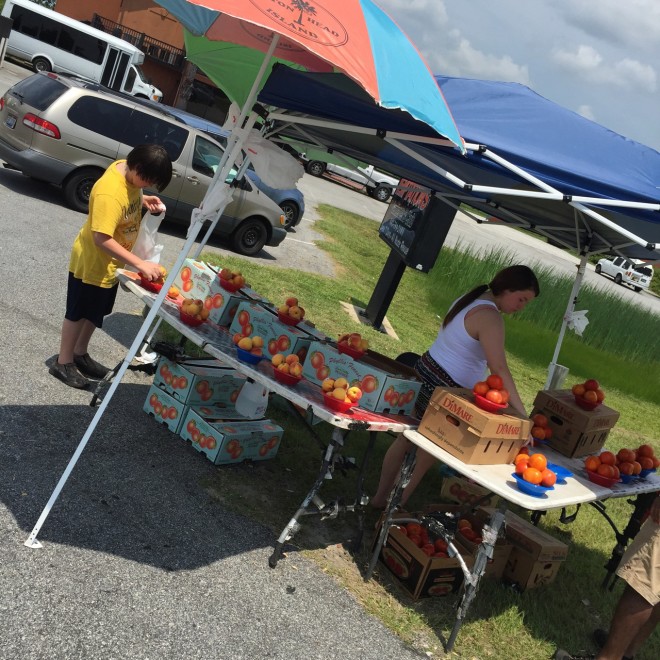 This summer we’ve been fortunate to make some fun family trips. In late July we trekked down to Savannah and Tybee Island, Georgia with my family. We have some extended family members in the area, and between my parents, brothers, and I, we’ve all been visiting there on and off throughout the years, although I personally haven’t been for about 17-18 years. So far I’ve written about our stay in Charlotte, breakfast there at Poppy’s Bagels, then stops at Goose Feathers, Clary’s Cafe, and Perc Coffee Roasters in Savannah, and The Breakfast Club and Tybean Art & Coffee on Tybee Island. Now I want to share some of our adventures in-between.

First: peaches. Just before we crossed the bridge into Savannah, we spotted some roadside peach stands, and well… when in Rome. Or when in Georgia. 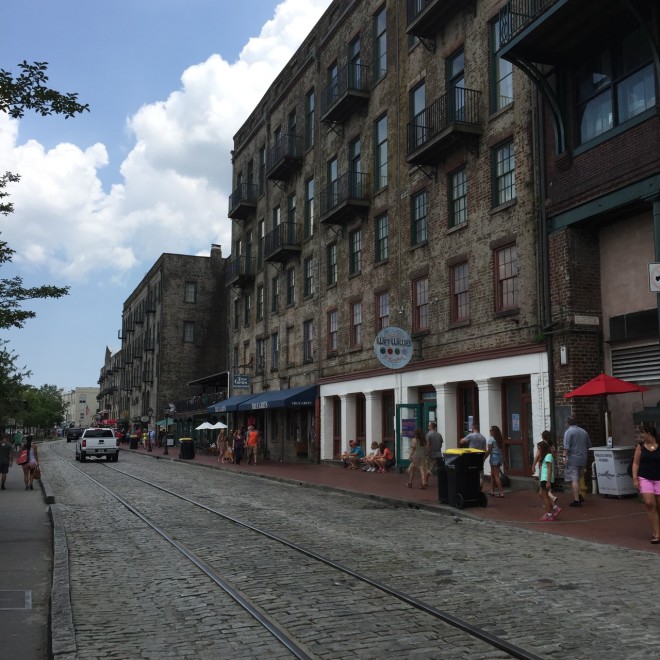 We spent some time in Savannah, a dense, humid, historic, and beautiful city. It’s noted for its organized layout, complete with beautiful squares, hundreds of old buildings, and the cobblestoned riverfront. 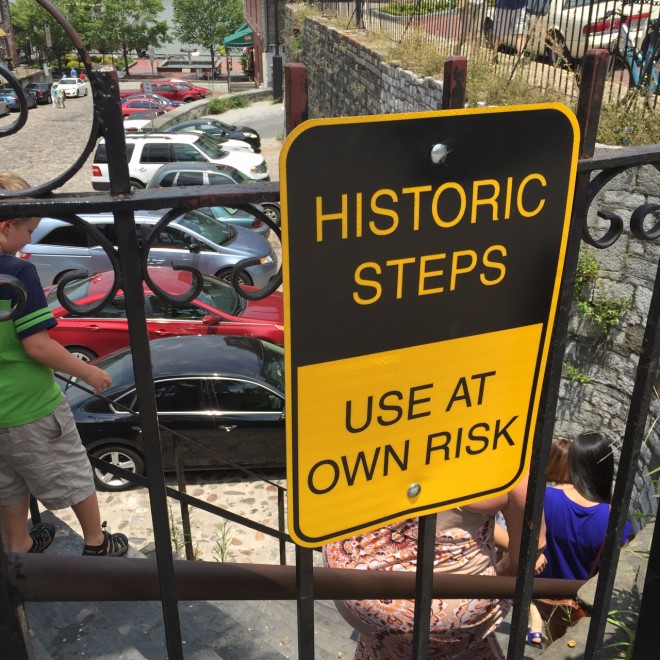 Beware of historic steps. Although they’re much more fun to take. 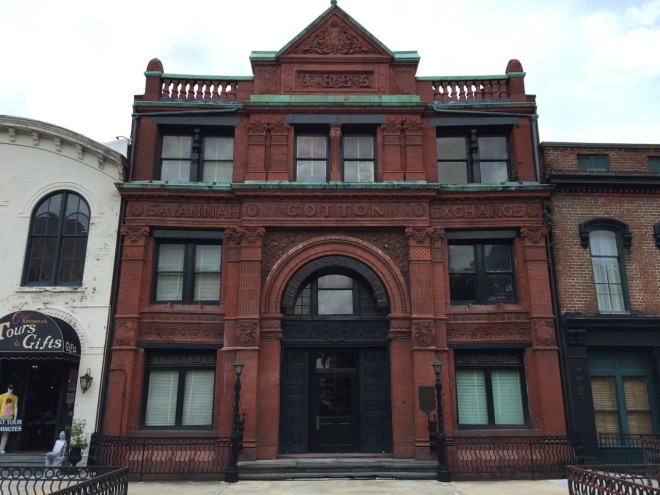 The riverfront is situated in levels, and the buildings at street level above are simply beautiful. 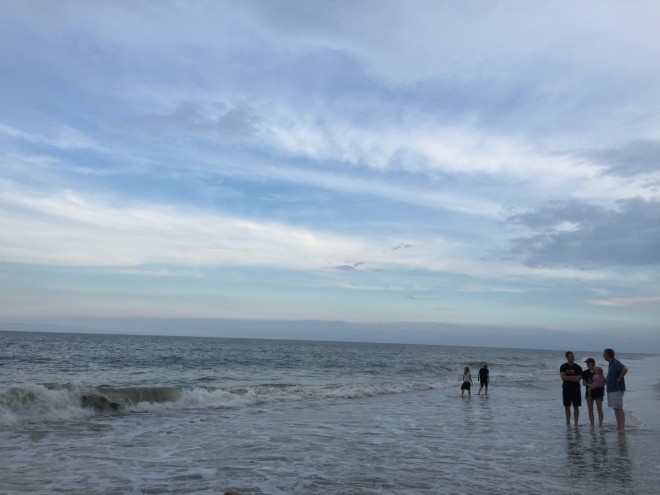 It was good just to be on the beach at Tybee, too. 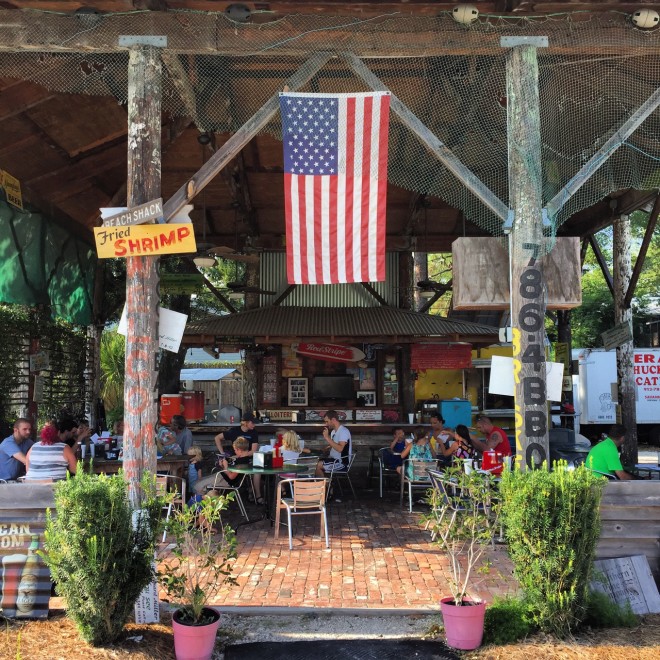 One night on Tybee we feasted at Gerald’s Pig & Shrimp. It’s mainly a food truck with a permanent bar and patio built onto it, so it’s pretty casual in terms of pacing. 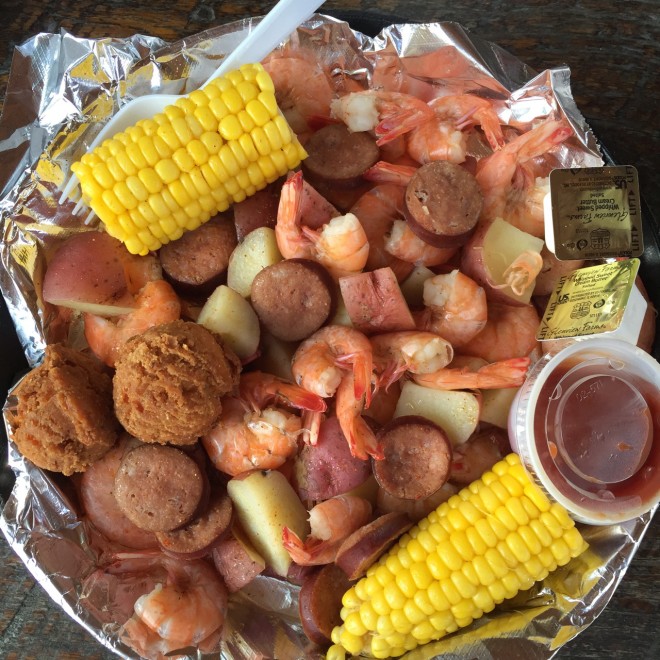 There we enjoyed our first Low Country boil. 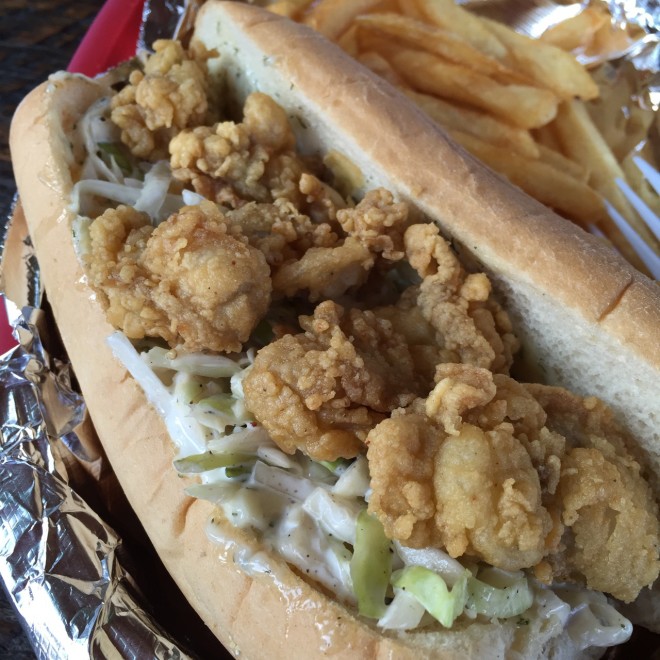 And a nice oyster po boy. 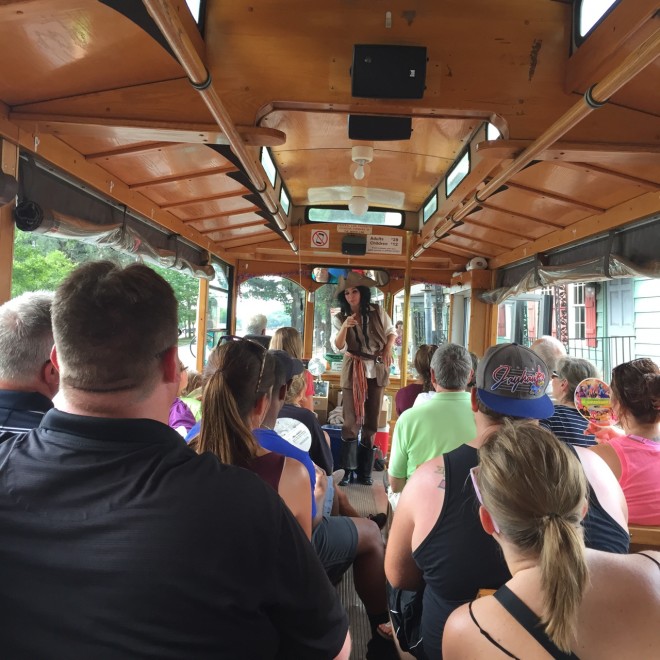 We took a trolley tour through Old Savannah Tours. It was a 90 minute adventure led by a supremely knowledgable driver. He knew every nook and cranny, every building and every story of Savannah. At select stops actors came aboard as characters to tell their story. Here’s a rum-running pirate talking about the Pirate’s House restaurant. 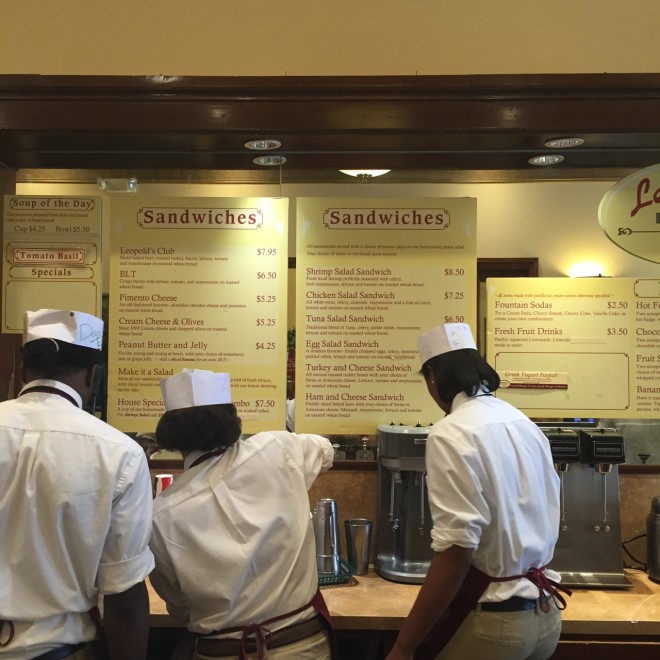 Even after riding in the covered trolley, we were hot, so we stopped by Leopold’s for ice cream. 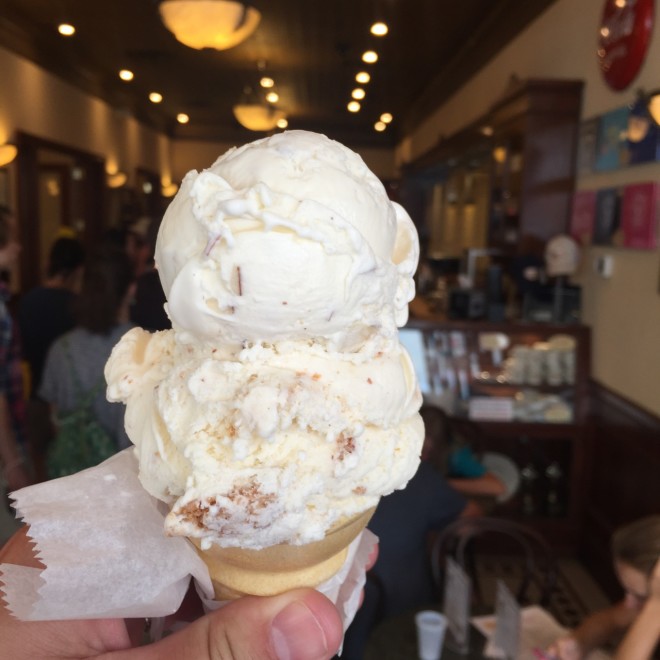 Leopold’s is an old school ice cream shop. It was started nearly a century ago by three Greek brothers. Today, one of the owners, Stratton Leopold, is a Hollywood producer, so there are signed movie posters decorating the space. 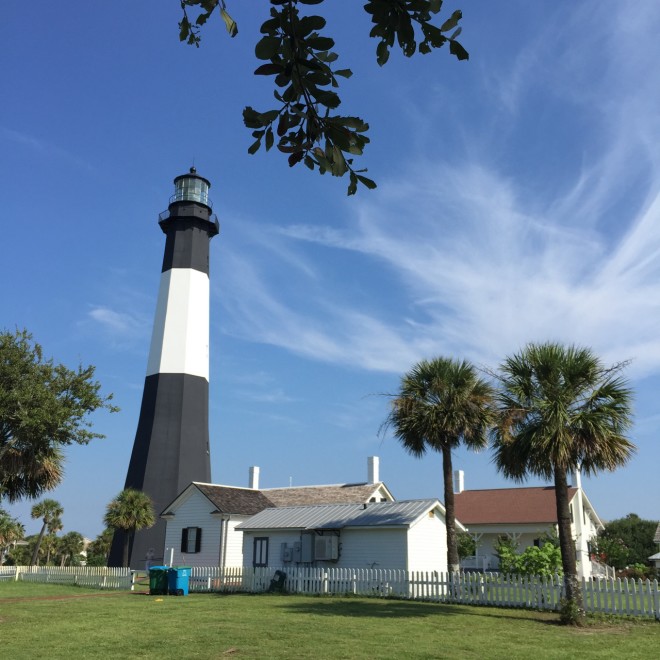 Our three-year-old Owen is a lighthouse enthusiast (we joke that he missed his calling of lighthouse keeper by 150 years). Of all the lighthouses we’ve visited, he’s never been able to visit them because he’s too short… until we stopped by the Tybee Island Light Station. He climbed all 178 stairs to the top and was thrilled by the view. 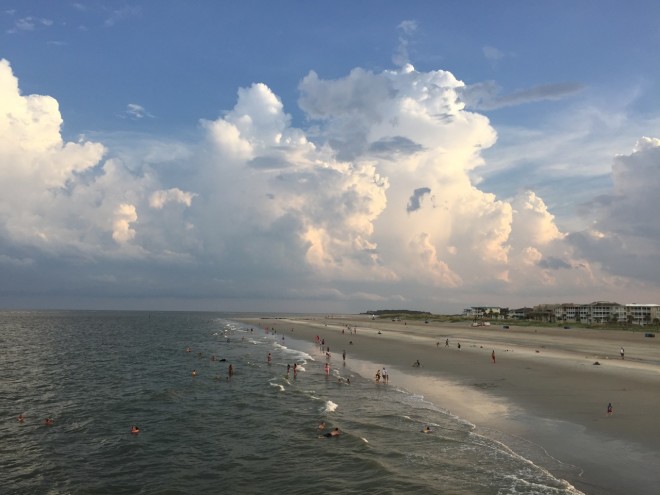 Of course, we spent some good time on the beach, too. Most days there was an afternoon downpour, which cooled things off and made for great swimming in the evening. 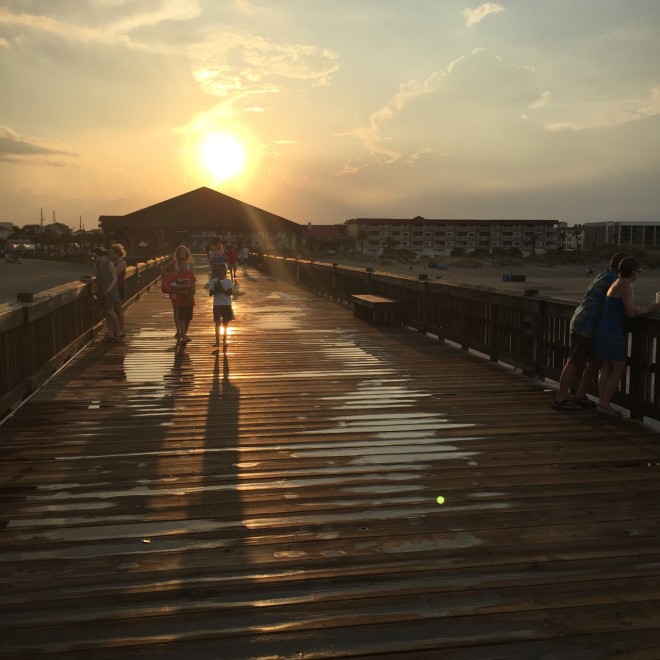 Especially beautiful is the Tybee Island Pier and Pavilion.

That’s part one of our Savannah/Tybee journeys! Now, on to part two!