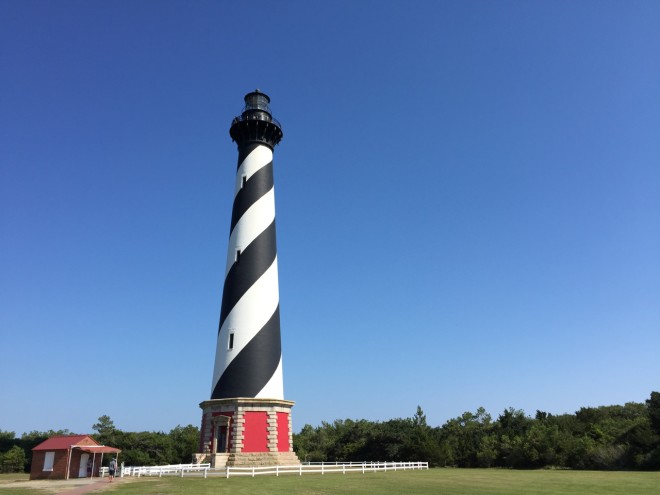 Well, it’s come and gone so quickly already: our annual trip to the Outer Banks. This year saw some beautiful sunshine, some rough waves, and plenty of food. 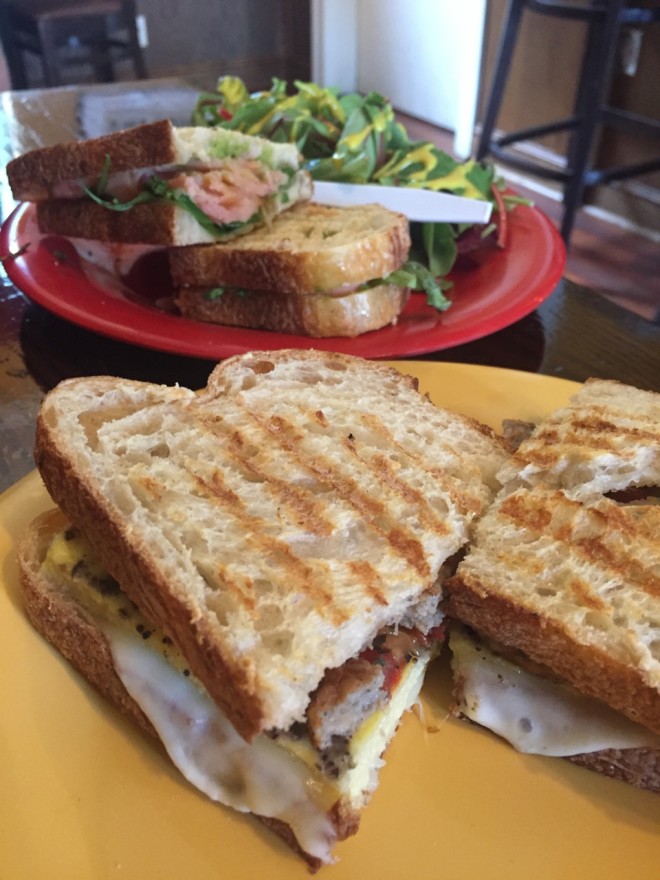 As I was working the Columbus Arts Festival, Mrs. Breakfast w/Nick and I joined the family a couple days late. We drove down and stopped for a lunch of great little sandwiches at Calvino Cafe in Charlottesville, Virginia. 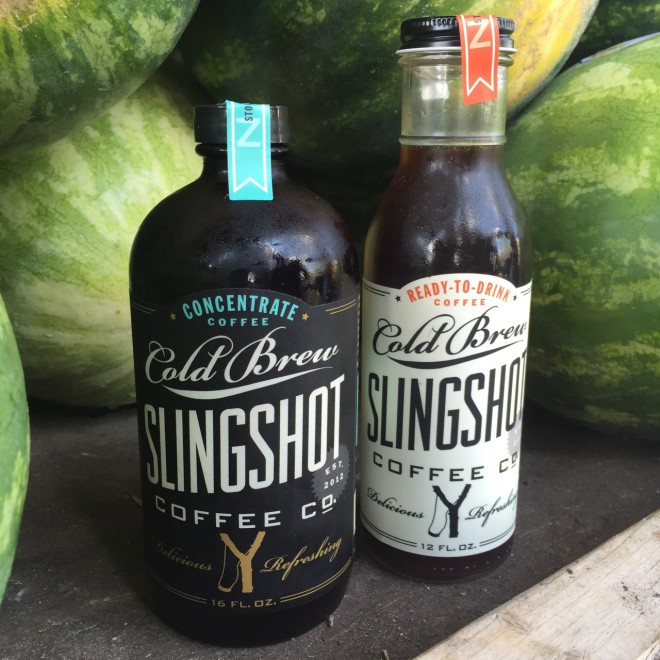 We also detoured to a Whole Foods to pick up bottles of Slingshot Coffee. Mrs. Breakfast w/Nick has a high school friend who works for the company, and we’ve been stalking them on Instagram for a while. Slingshot makes cascara tea, cold brew coffee, and cold brew concentrate. Both coffees were delicious – very smooth and clean. The cold brew leaned toward light and fruity. (Of course, after our trip we discover that Slingshot is sold at Whole Foods in Columbus.) 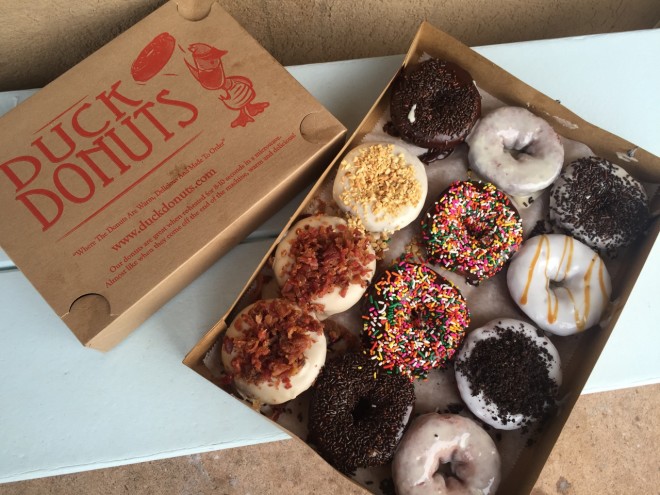 It’s standard practice for anyone traveling down the island to stop at Duck Donuts. They switched up their ordering system, which confused me a bit at first, but the donuts are still top notch. On the suggestion of Jason from Thunderkiss Coffee (another frequenter to OBX), I tried one with peanut butter frosting and crushed peanuts. Great idea. 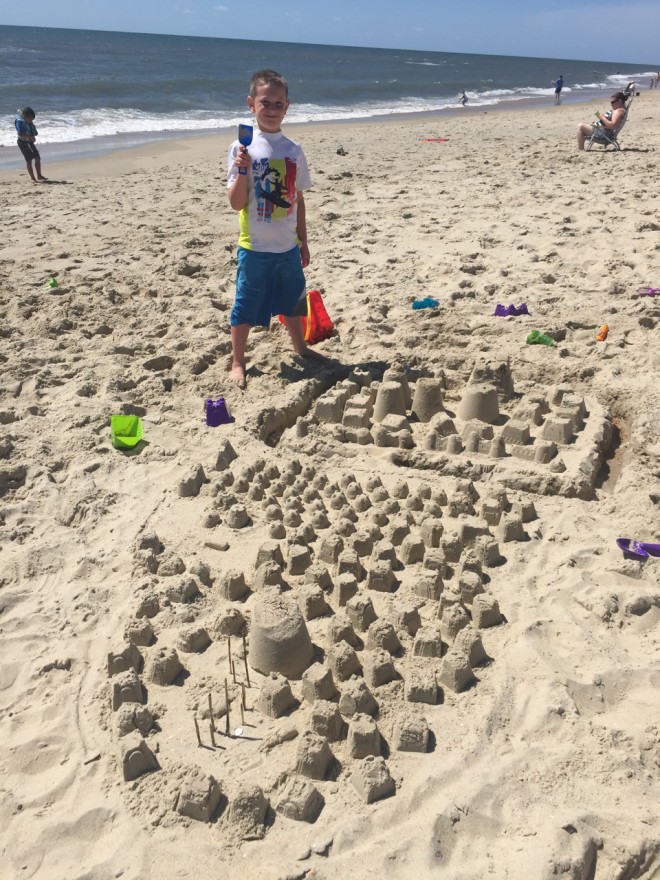 We spend a lot of days on the beach, reading, swimming, building sandcastles, flying kites, walking down to the rickety Avon Pier. Will created some full cities out of sand, complete with churches, schools, castles, and hospitals. 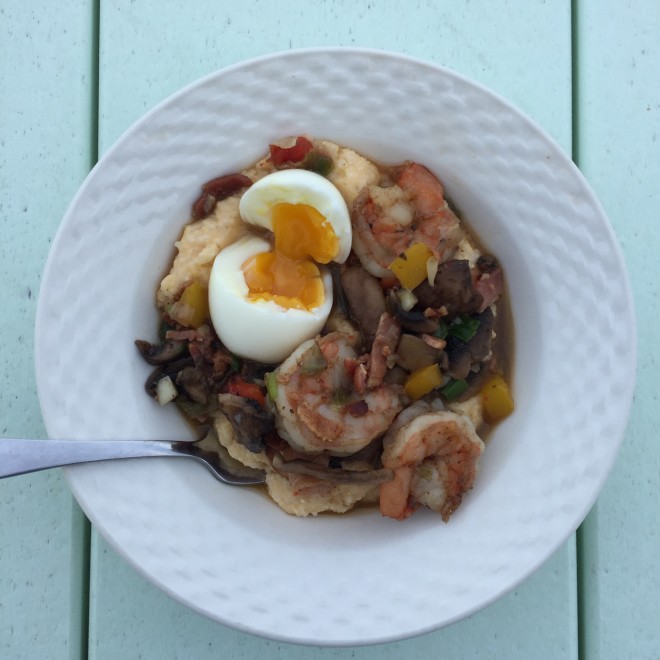 We love to cook as a family, and we actually make up a schedule for dinner and dishes between all the families, so no one’s getting stuck cooking or cleaning all the time. We made shrimp and grits one of our nights: cheesy grits; bacon; shrimp, mushrooms, and veggies sauteed in the bacon fat; and soft boiled eggs. 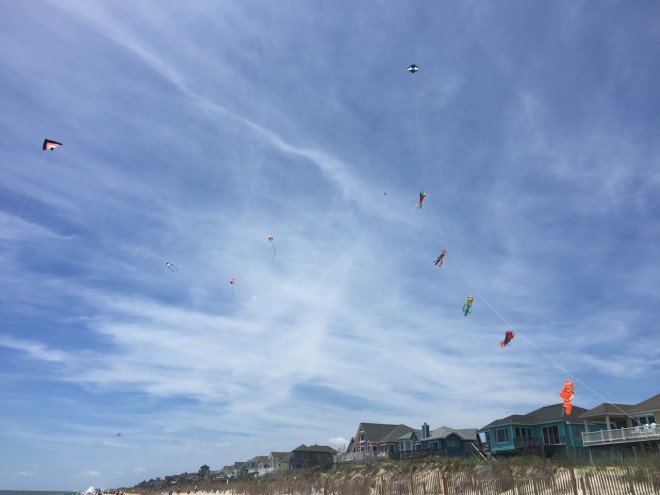 Another day on the beach. I don’t say it enough, but I love flying kites. 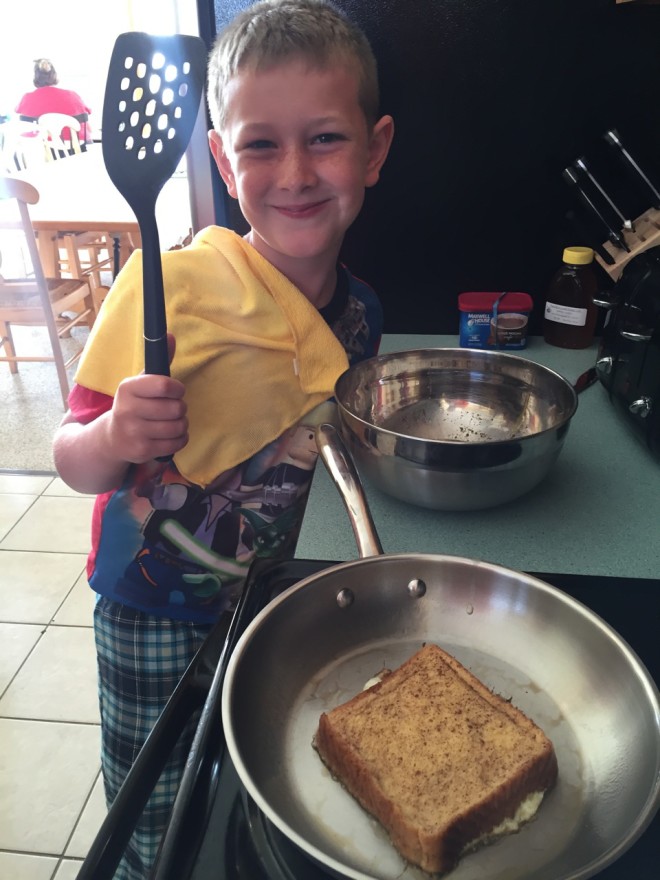 Of course we make breakfast, too! Chef William made his cinnamon French toast for us one morning. 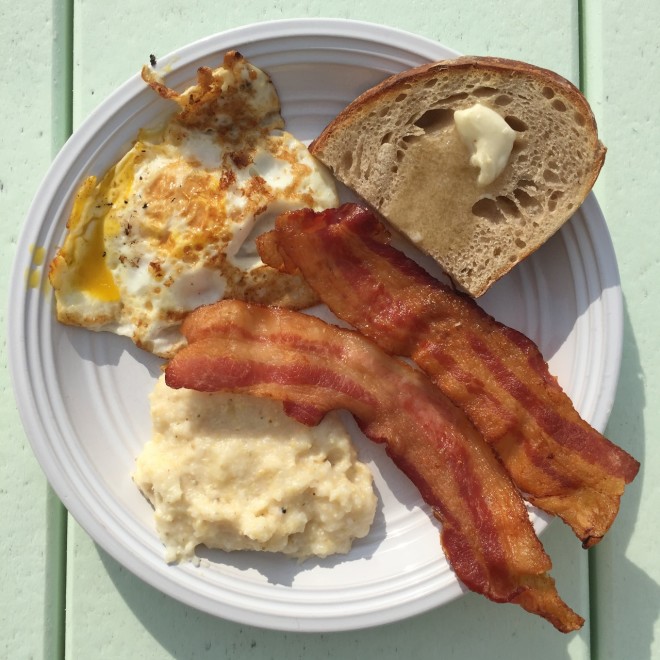 Another morning we made grits, bacon, eggs fried in the bacon fat, and sourdough toast from Graceful Bakery on Ocracoke Island. 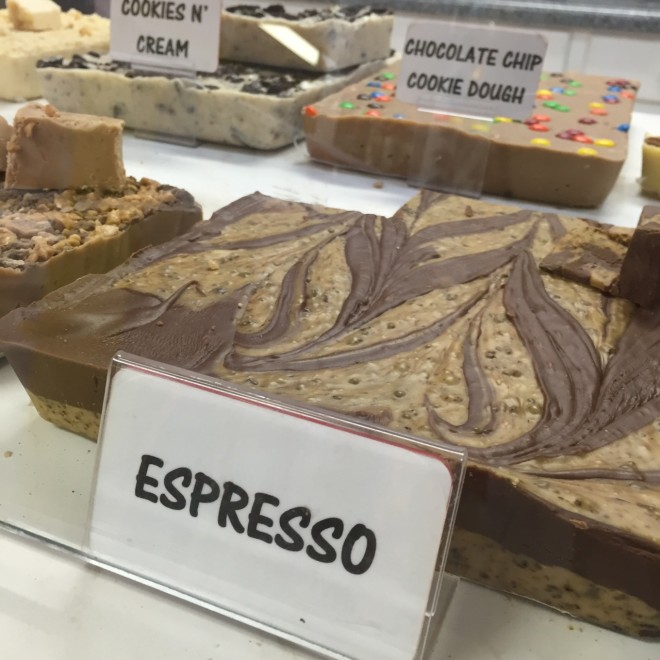 We often make at least one trek to the Scotch Bonnet in Frisco for fudge. (Pro-tip: try the sand bar sea salt caramel.) 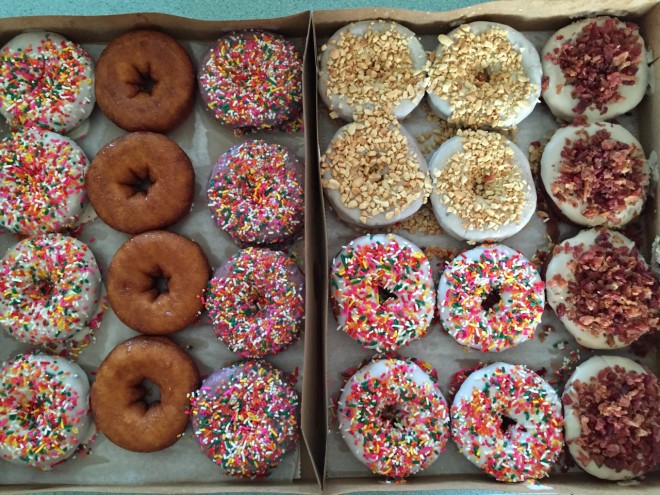 Not everyone in the family can stay the whole time, and newcomers know it’s best to arrive with a couple boxes of Duck Donuts for the house. 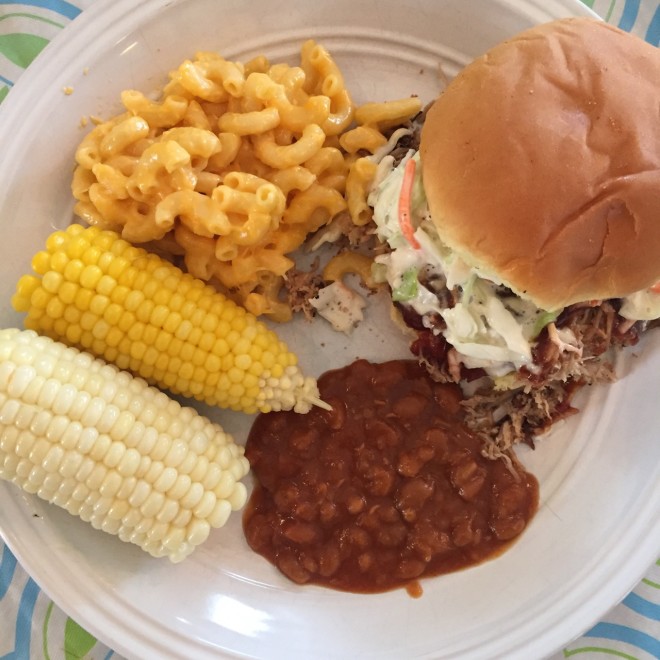 Another dinner, this one made by my brother-in-law Chip (who smokes his own pork) and sister-in-law Marcia. 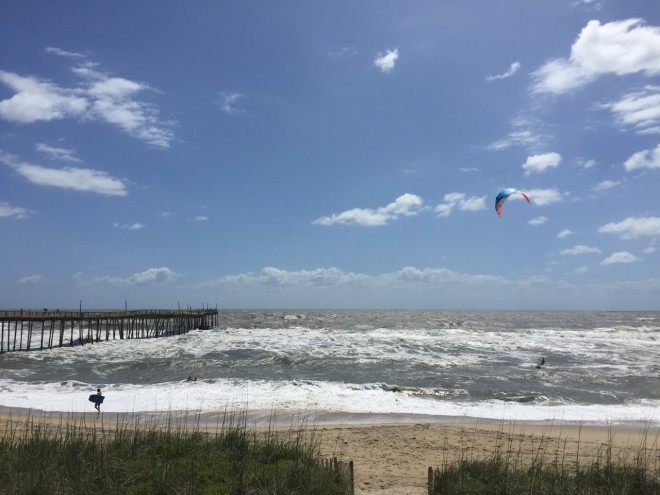 A few days got too windy to swim in the ocean, but fortunately we could head to the pool at Beach Klub at Koru, right next to the Avon Pier. On one of the windiest days, we watched kiteboarders whip up and down the beach. 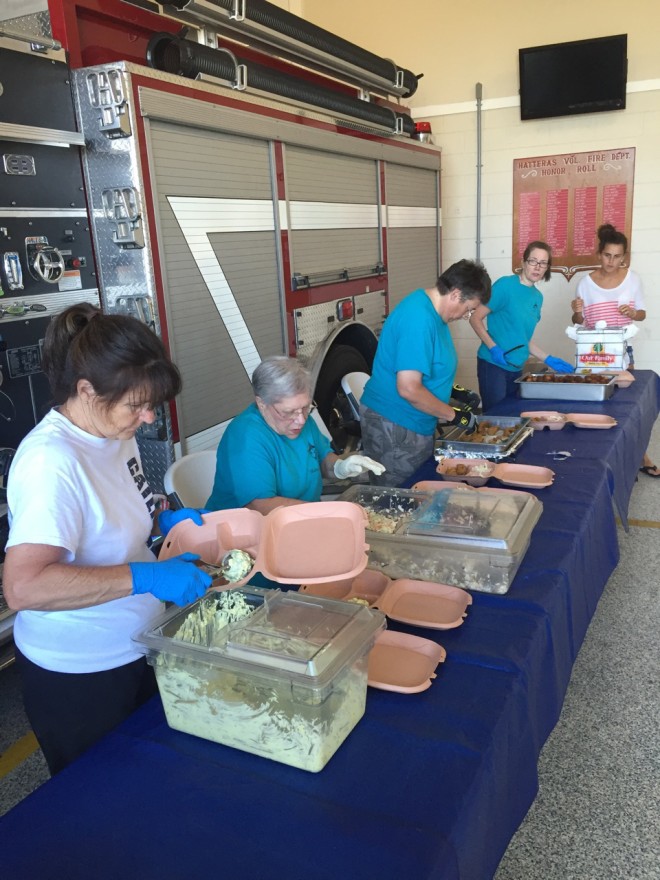 We’ve made it a tradition to visit the Hatteras Village fish fry. It runs every Saturday from 5-7 p.m. during the summer at the Hatteras Volunteer Fire Department. The line starts forming before five! 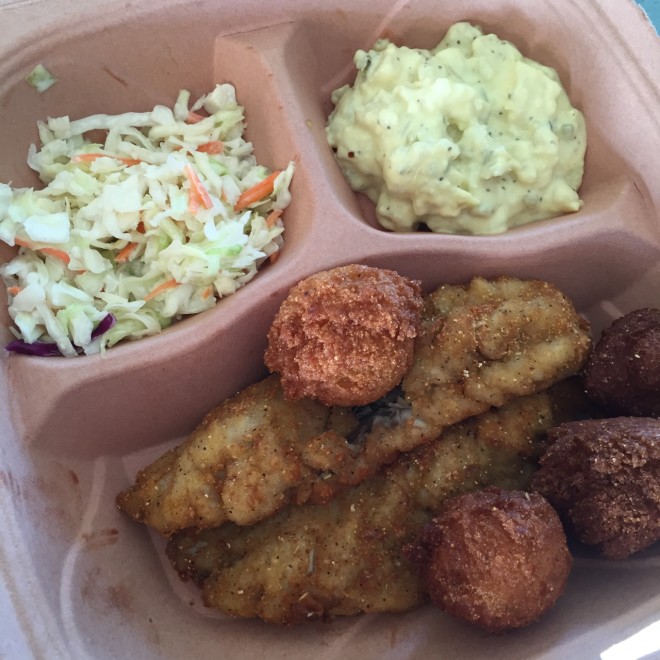 The meals are simple, priced at $8 for small and $12 for large. Each meal comes with cole slaw, potato salad, hush puppies, sweet tea, and the day’s catch. The larges have more fish.

That’s just the beginning – check out part two for more!