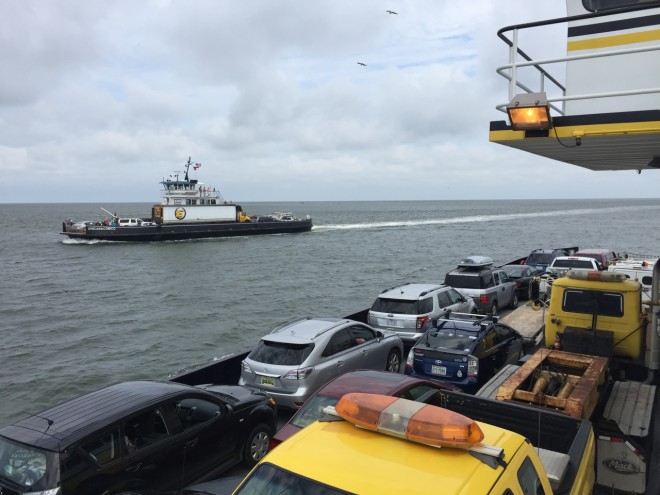 During our travels, Mrs. Breakfast w/Nick and I overnighted on Ocracoke Island. Ocracoke is our happy place. In case you don’t know it, it’s a small island on the Outer Banks, accessible only by ferry or plane. The island is about 14 miles long, 13 of which is protected National Seashore. At the southern end is a small village surrounding Silver Lake Harbor. The ferries run regularly from the bottom tip of Hatteras Island and from Swan Quarter or Cedar Island (which are longer rides). 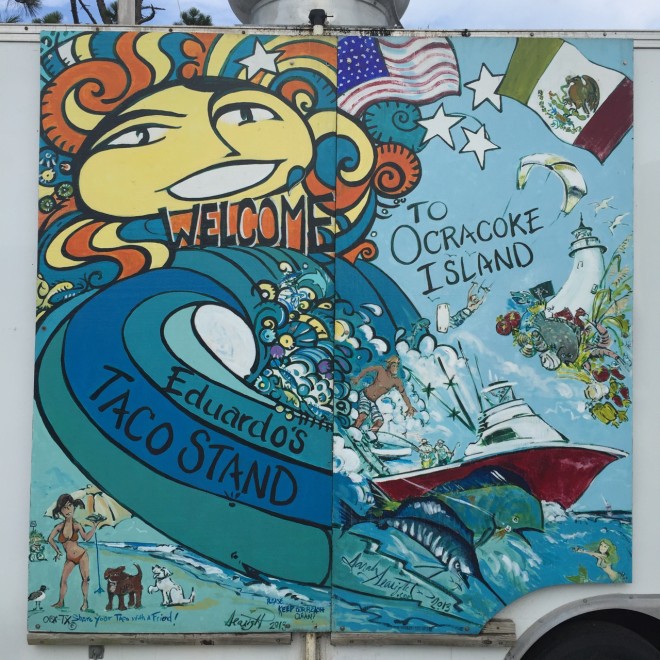 We hit the island early enough to get breakfast (of course!), and immediately drove up to Eduardo’s Taco Stand. Eduardo’s serves one of the best breakfasts on the island (although Dajio is solid, too). 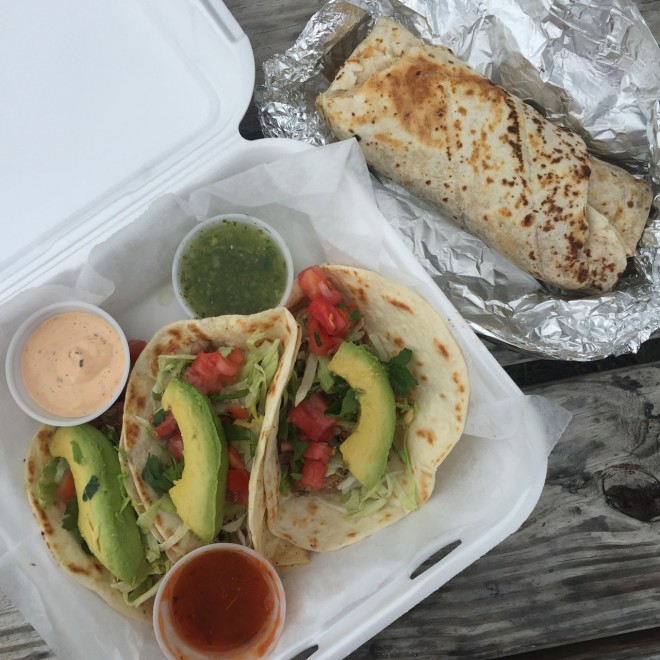 We quickly devoured some delightful bites: a special of ahi tuna tacos, and a breakfast burrito with seared ahi tuna, cheese, eggs, and black beans. They grilled the cheese (think gringas at Los Guachos, Columbus friends), which really seals the deal on this being one of the best breakfast burritos I’ve ever had. We went back for those burritos again the next morning. I should have bought enough to fill a bag and bring it back home. 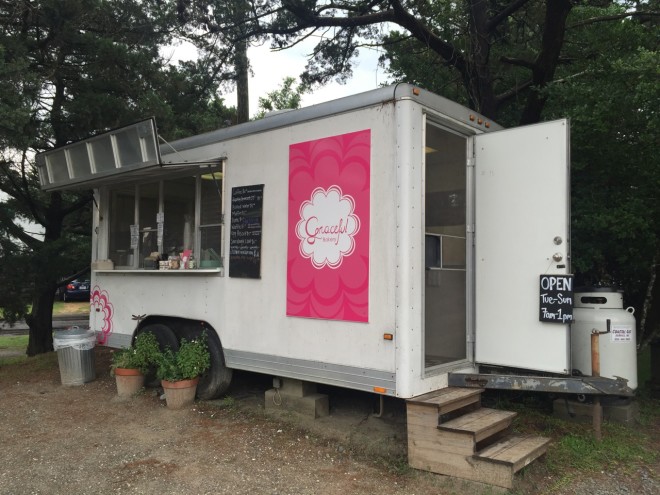 On the advice of Matt Swint from Matija Breads, we also found the Graceful Bakery cart. 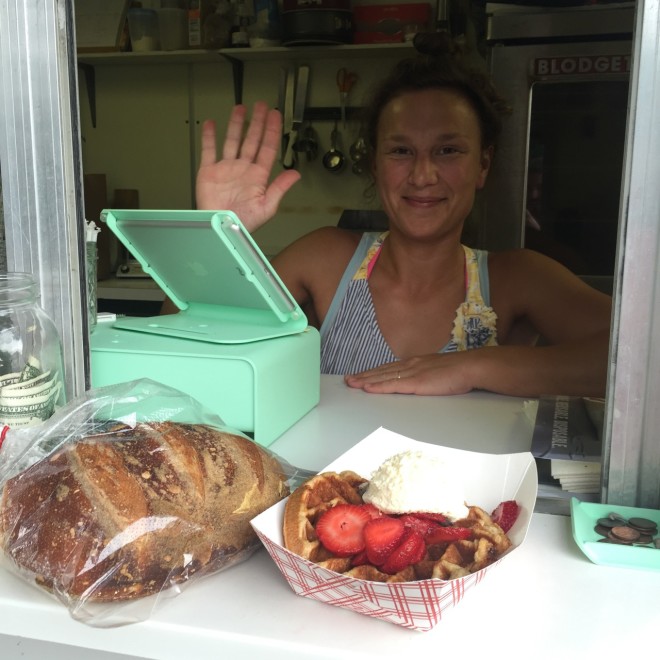 The owner Lauren used to work with Matt at Rotolo’s in Columbus, and she came down to Ocracoke to start the cart a couple years ago! 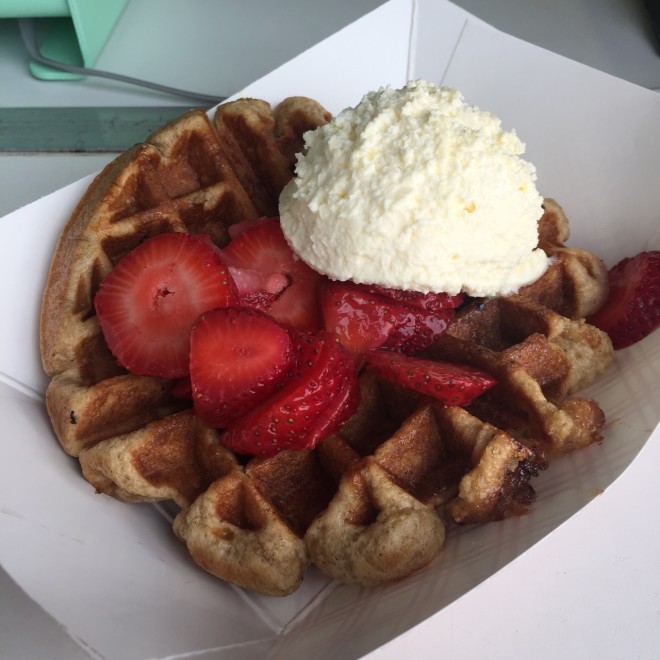 We picked up a waffle with strawberries and whipped cream, and she shared a loaf of her sourdough bread with us. 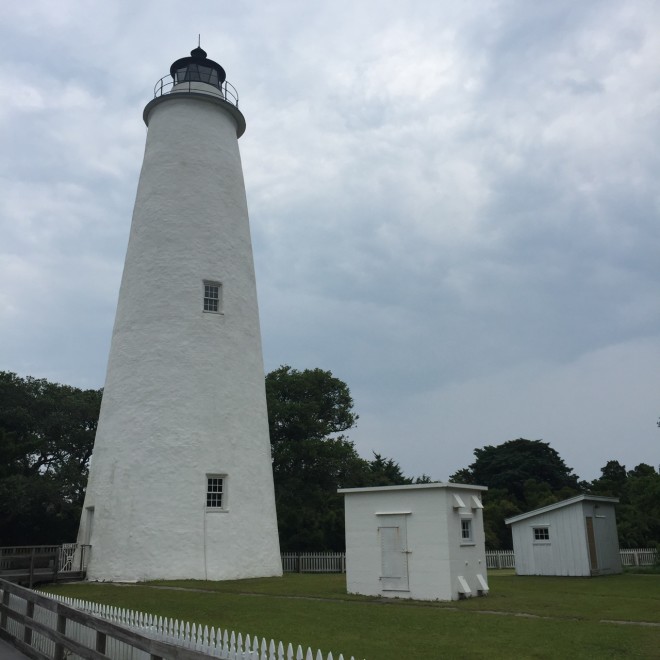 Amidst our island wanderings, we said hello to the Ocracoke Lighthouse. 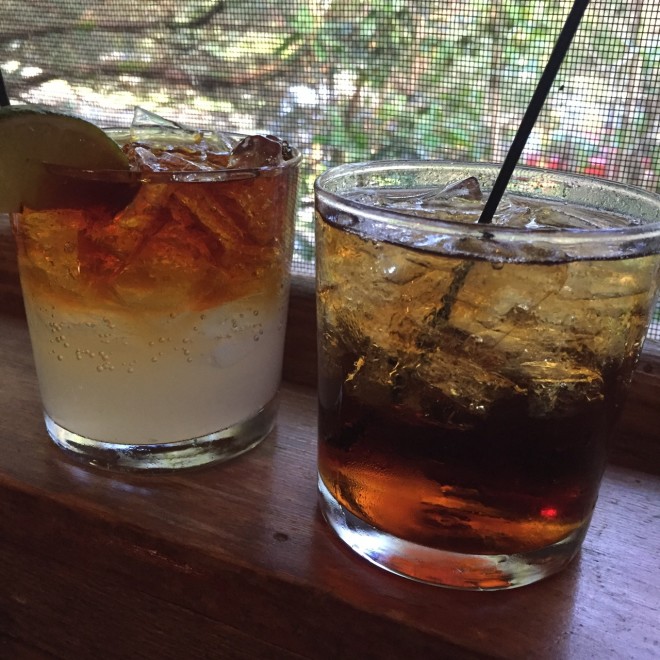 For dinner that evening, we took Lauren’s recommendation and visited the Back Porch Restaurant. They have a huge screened-in dining room that lets you enjoy the sounds and smells of a breezy summer evening while fending off the bugs. 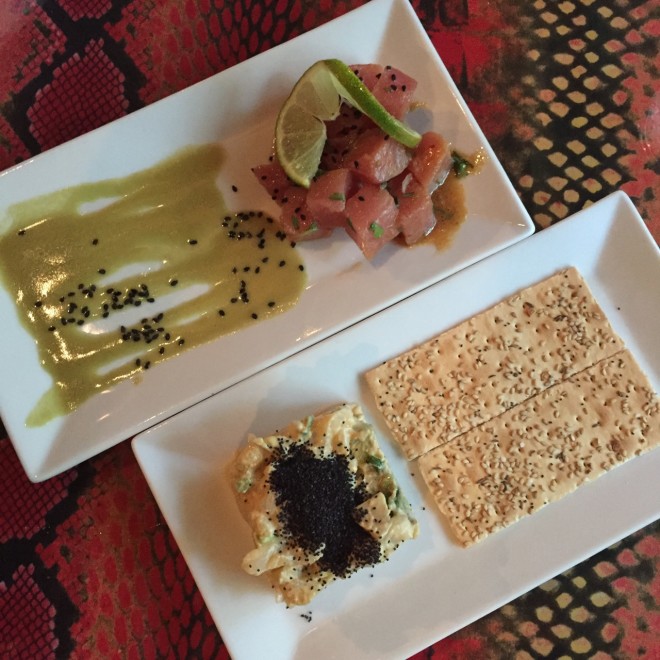 We had a delightful dinner of drinks and small plates, like their take on Hawaiian poke with fresh tuna in a wasabi sauce, or scallop crudo with avocado and poppy seeds. 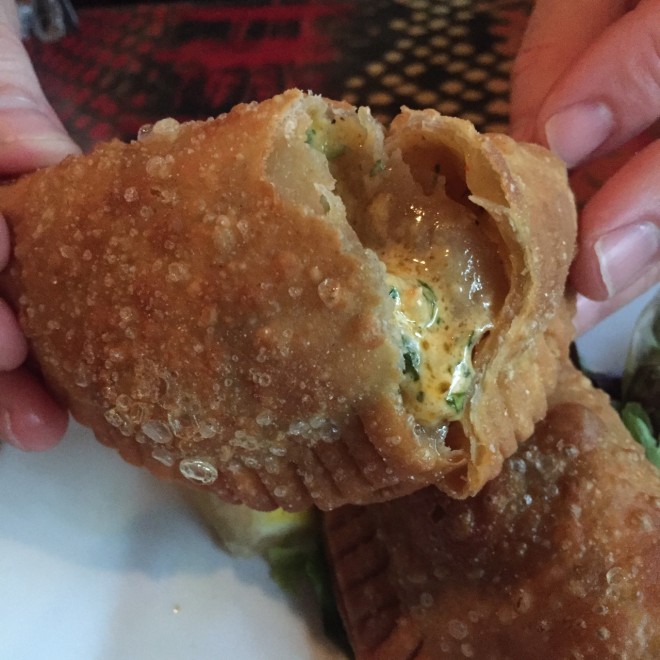 We also sampled a beet and arugula salad, baby crabcakes with a lemon caper aioli, and these little shrimp empanadas with a chimichurri sauce. Solid all around, and highly recommended for dinner if you’re visiting the island. 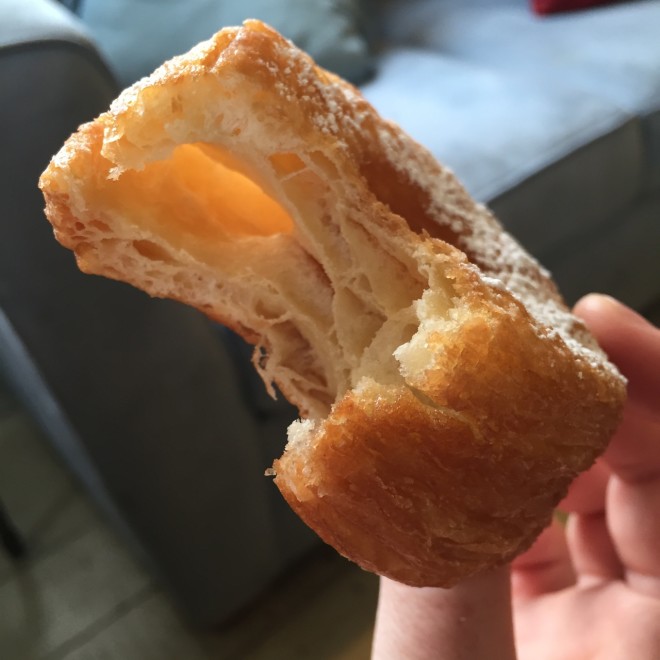 For first breakfast the next morning, we picked up espresso and a cappuccino at Ocracoke Coffee Co., supplemented with their take on the cronut. We get the feeling that OCC is the place where most locals start their day. 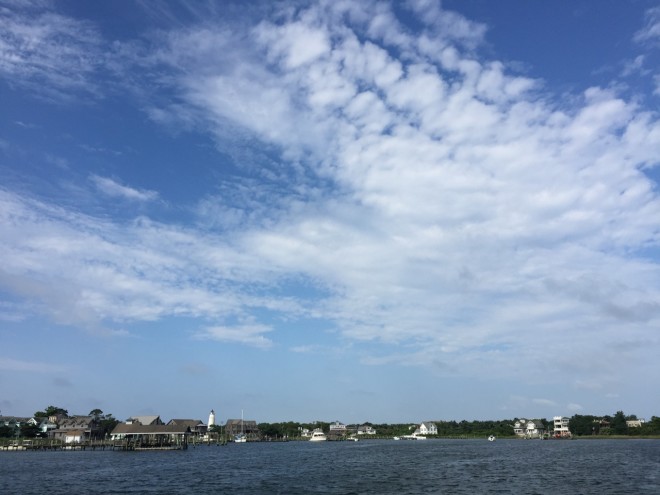 We bought more breakfast burritos from Eduardo’s (I’m telling you, they’re addictive), then sat out by the docks on the harbor, with a view of the lighthouse, boats coming and going, fishermen cleaning fish. We watched a small flock of pelicans hover around one of them while he cleaned fish and occasionally tossed them pieces. 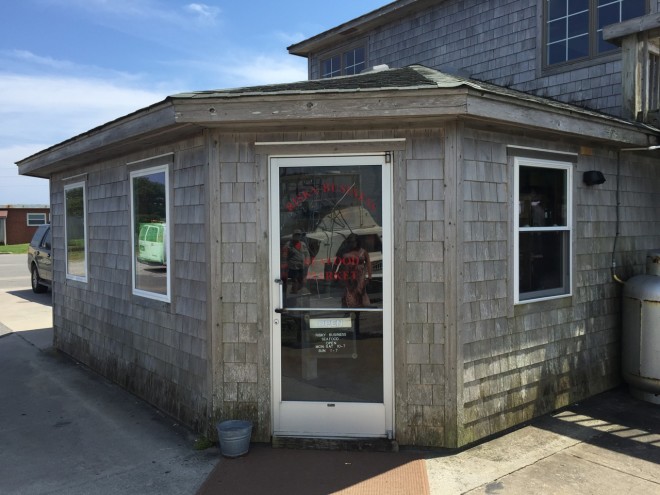 And then it was back to Hatteras Island for more fun with the family. Being in such close proximity to the ocean and its bounty, we take any opportunity to find fresh seafood. Unfortunately, some of the oldest spots have closed up over the years, so it’s harder to find fish coming directly from the fishermen. Fortunately, Risky Business is still around. Their little side street hut near the marinas in Hatteras Village is still kicking. 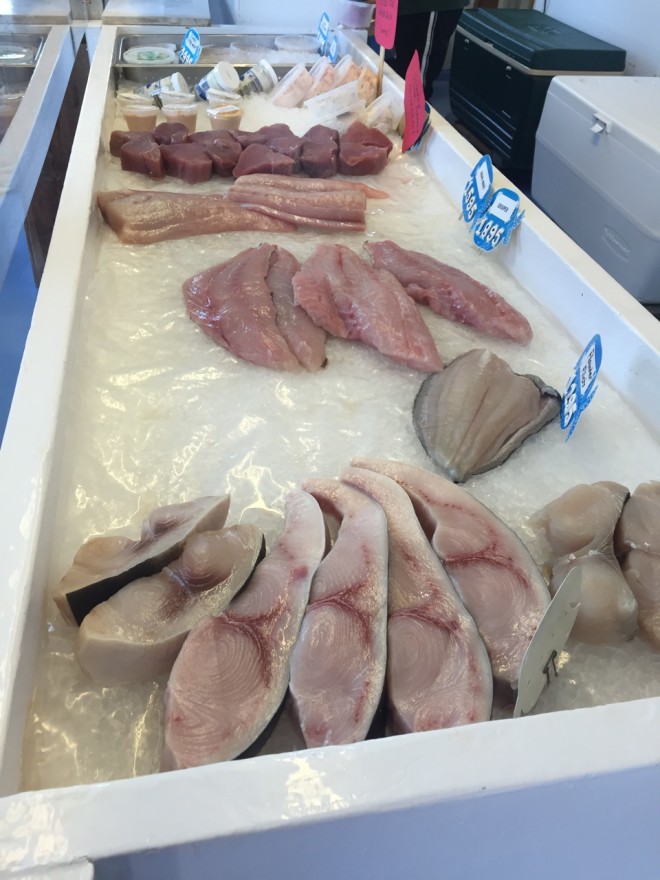 The place smells so good inside… assuming you like the smell of seafood. The owners have been running the place since 1979, so they know fish. We bought some bites of smoked tuna, then ordered fresh crabs to be steamed. You have to order them a couple days in advance. 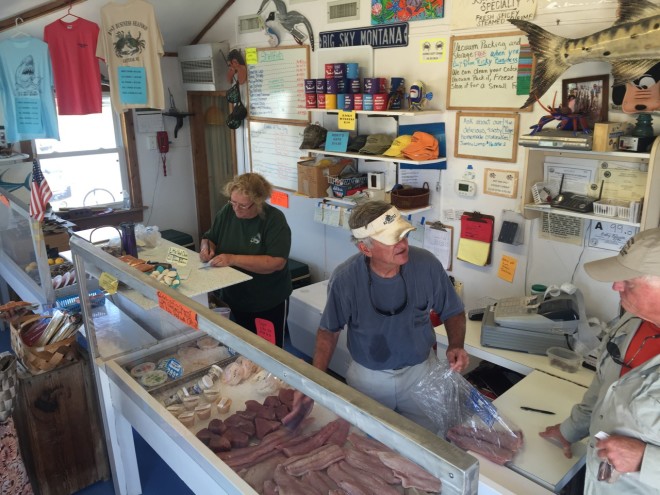 A local shared the tip that Risky Business sometimes has sushi-grade tuna, but you have to ask for it. We plied the owner for some, but he didn’t have any that day (but he had some later that week). He also taught us that tuna can be considered sushi grade if it’s caught quickly. If the fish put up a long fight before being reeled in, their muscles are overworked and laced with lactic acid (like a runner’s legs after a marathon). That meat is still great for eating, but you’ll want to cook it rather than taste it raw. So whether he has sushi-grade tuna depends on how the tuna has been caught that day. 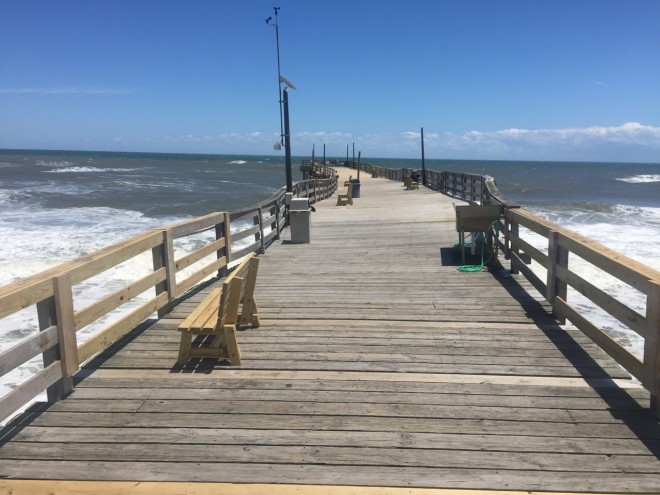 Amongst our other island wanderings, we visited the Avon Pier a few times, where you can sightsee or fish. The pier has weathered multiple hurricanes and nor’easters, and it’s got character to prove it. Every year it’s a little more off-center, with a few more pilings as reinforcement. We stood out on the end during one particularly windy day, and felt it shudder every time a wave hit.

Our adventures conclude in a third Outer Banks post!

An Easton Staycation at the Residence Inn