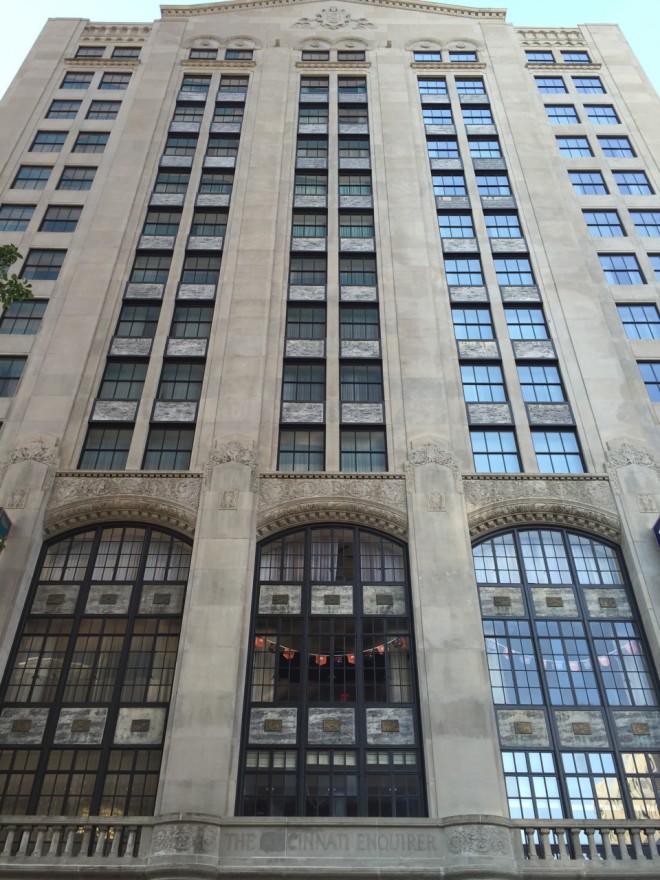 Over Labor Day weekend Mrs. Breakfast w/Nick and I celebrated our anniversary with a small trip to Cincinnati, hosted in part by CincinnatiUSA. They put us up at the beautiful new Hampton Inn downtown, housed in the old Cincinnati Enquirer building. 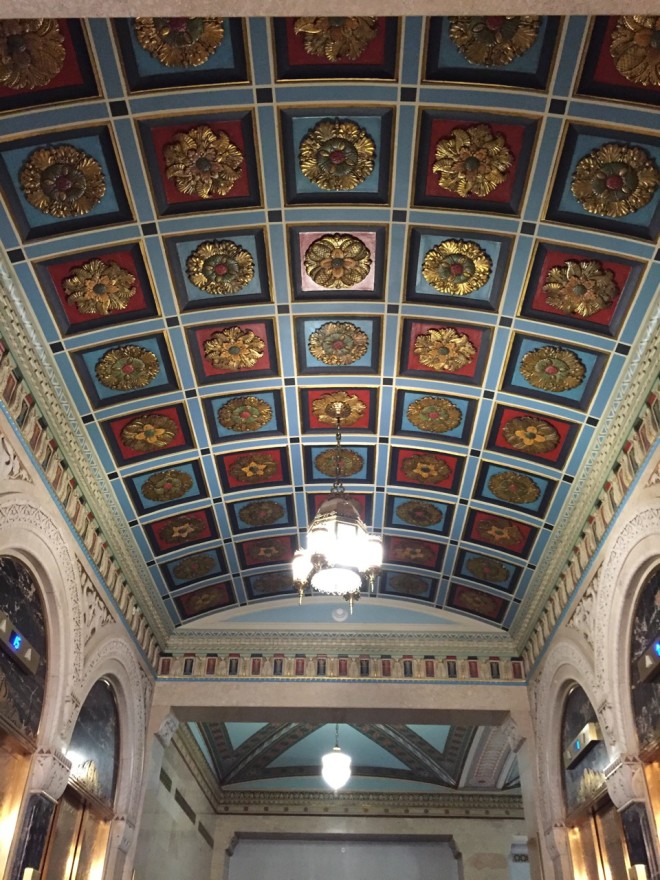 The building was completed in the late 1920s, and just last year was converted into hotels as the Enquirer moved offices and production to other facilities. They’ve done a nice job of retaining the historical details like the lobby and the endearingly small elevators, while blending in modern amenities. 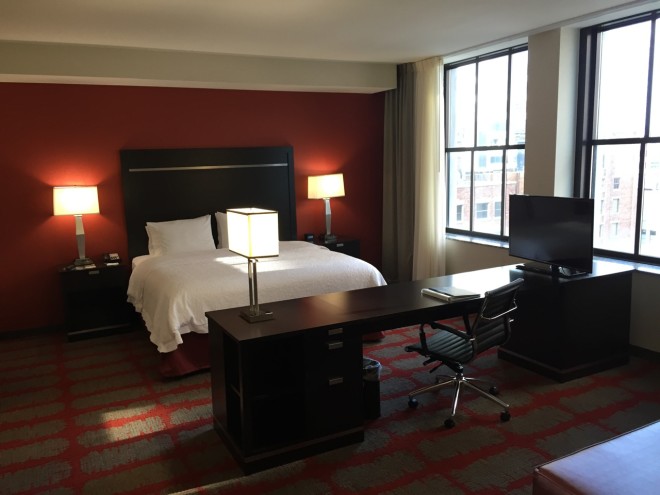 The rooms are very nicely appointed, with letterpress printing-themed decor spread throughout the building. This obviously appealed to Mrs. Breakfast w/Nick and her work at Igloo Letterpress. 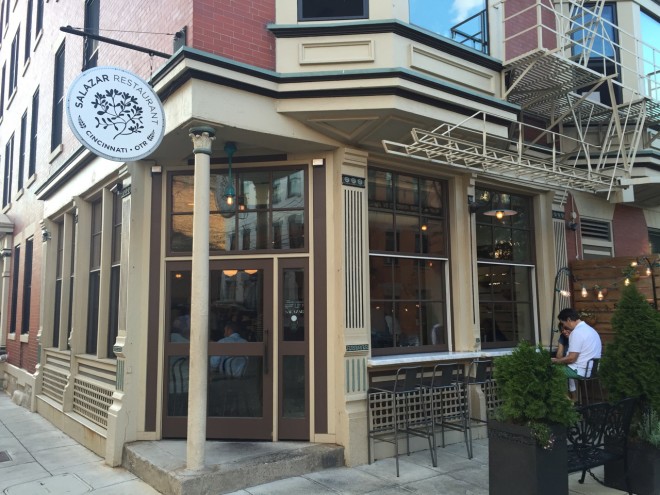 We arrived Friday evening after work, so we were in the mood for dinner and drinks. We headed to Salazar in Over-the-Rhine. 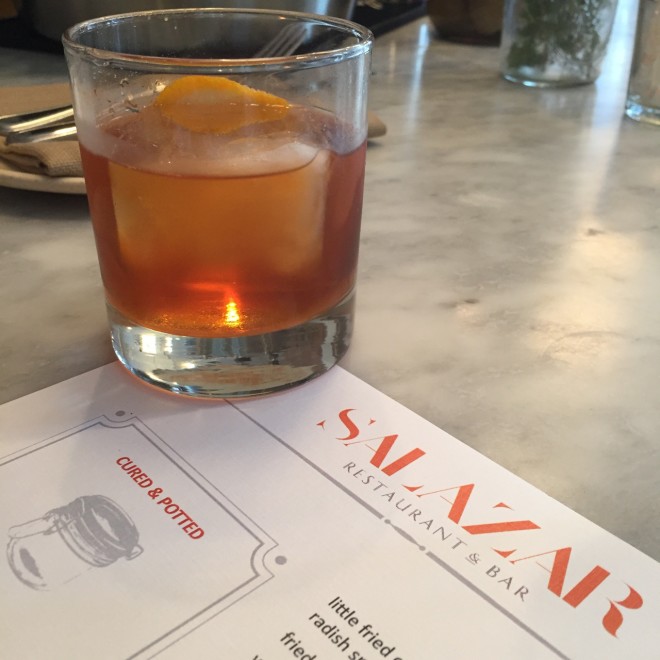 The restaurant is one of many (including Chef Jose Salazar’s other restaurant Mita) that’s been on our list to try. Their reservations were full but they were taking walk-ins, so we quickly found a seat at the bar. 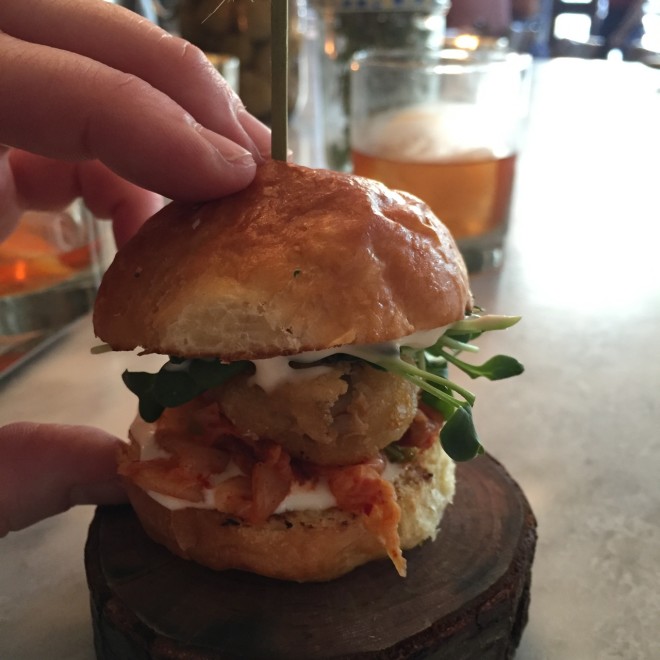 We split a few items and enjoyed a couple cocktails. The little fried oyster sandwich is layered with kimchi, radish sprouts, and a garlic mayo. It was indeed little but it packed a punch. We could have eaten about five more. 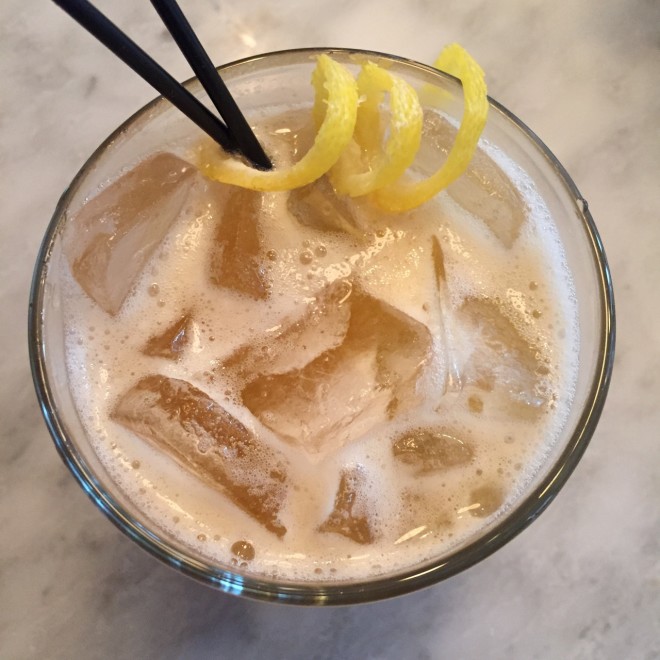 We’ve come to appreciate sitting at the bar more and more, watching the bartenders work and connecting with them. We love just giving bartenders a base alcohol and then following their direction; it’s the best way to discover a new favorite. 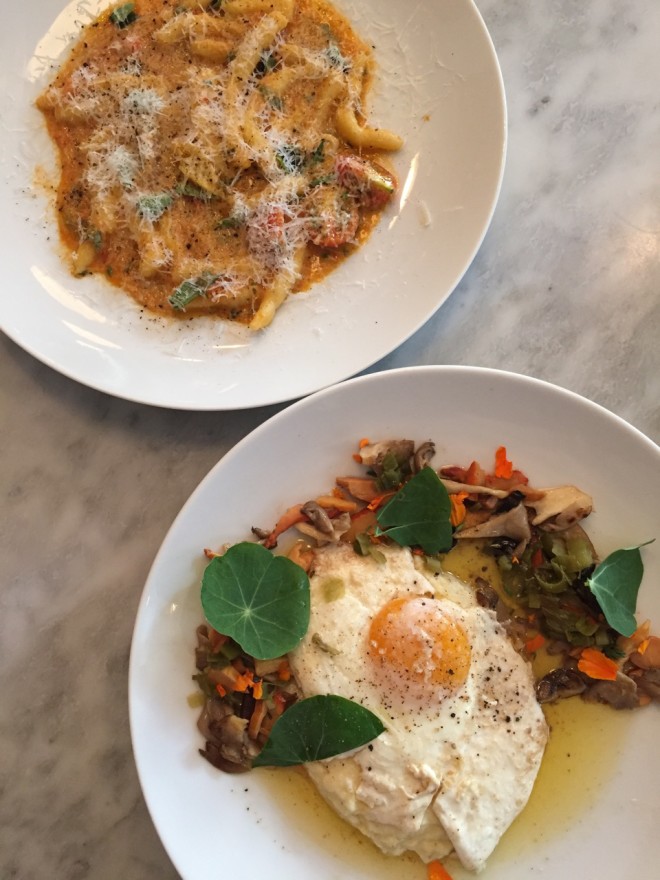 We also split the potato gnocchi with summer squash and the polenta with mushrooms, asparagus, and a fried egg in brown butter. Both excellent. 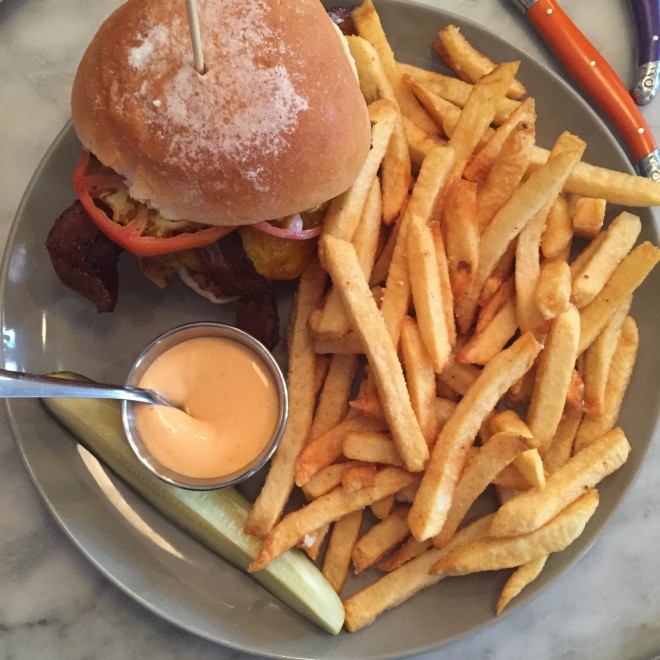 Just as good was the burger with aged cheddar, bacon, and big, thick tomatoes. Lovely side of aioli to go with the fries. 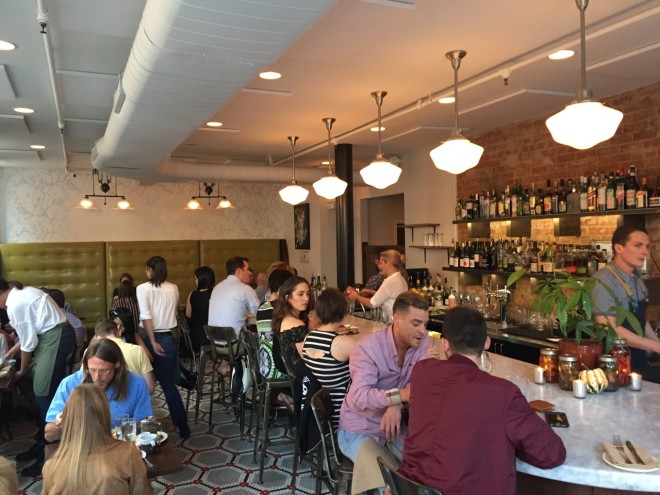 By the time we left, the restaurant was filling up. Salazar is a beautiful little corner space in Over-the-Rhine, just a couple blocks off Vine Street and close to Washington Park. 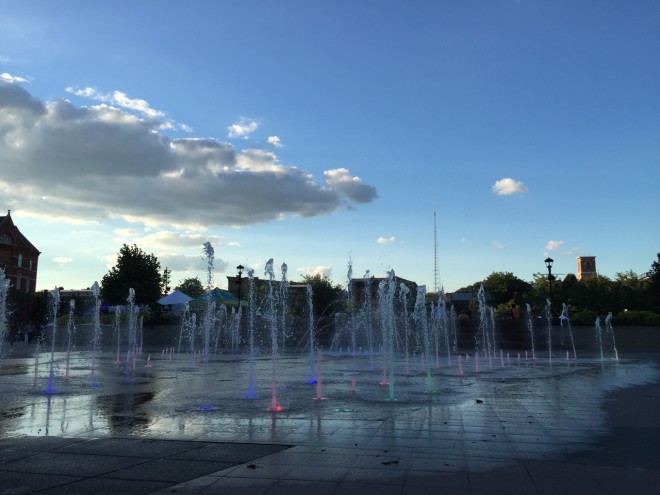 We strolled over to Washington Park after dinner. It was humming with activity, from a big blues concert to kids playing in the fountains to people just enjoying the evening. 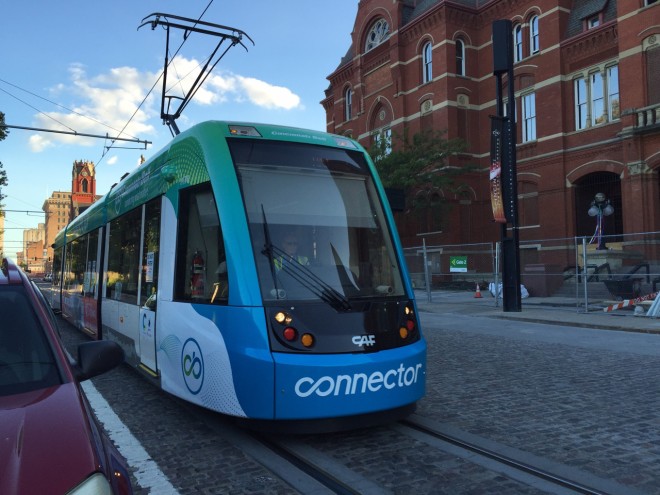 All that weekend I was geeking out over the new streetcar (officially the Cincinnati Bell Connector). It didn’t technically open until the following weekend, but the cars were out rolling down the tracks for final testing. I’m very jealous of their system, and wish we could get something like this in Columbus. 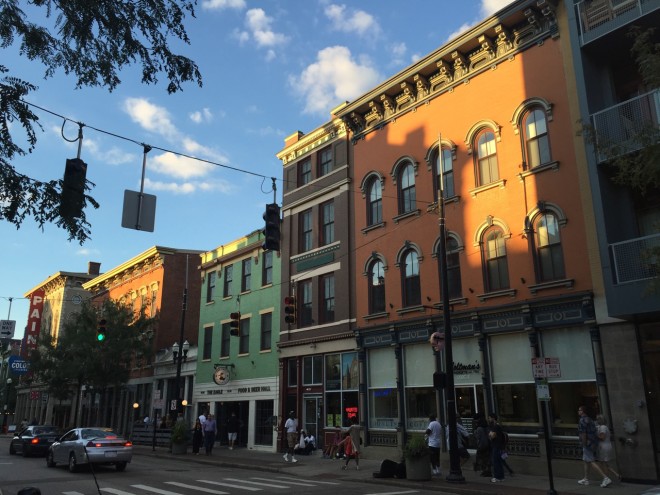 We spent a while just strolling through Over-the-Rhine (perhaps even stopping for a donut at Holtman’s). I love the feel of that area, especially the architecture. Over-the-Rhine is one of the single best preserved historic neighborhoods in the country, and I’m hoping that heritage is properly preserved as it’s redeveloped. 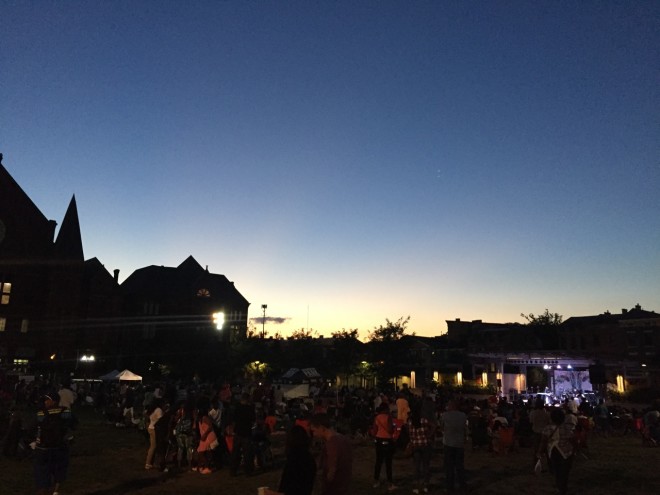 We caught a really beautiful evening. Side note: I’m obsessed with the Cincinnati Music Hall building (to the left in the photo). The massive structure is currently being renovated, and I can’t wait to see inside it, once it’s open. 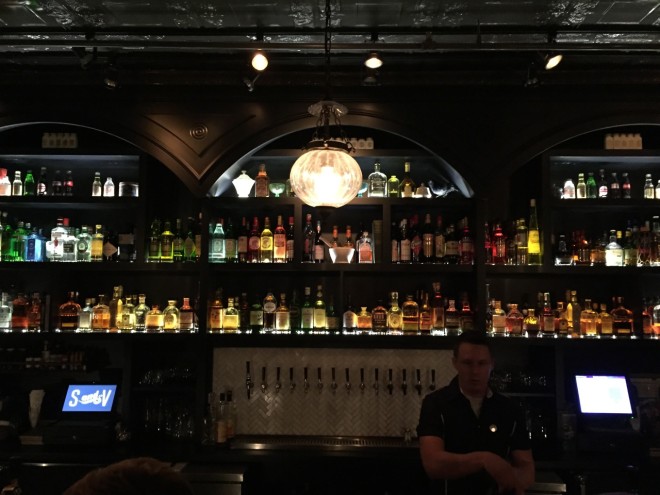 We finished the evening with a stop nearby at Sundry & Vice, a friendly little cocktail bar. 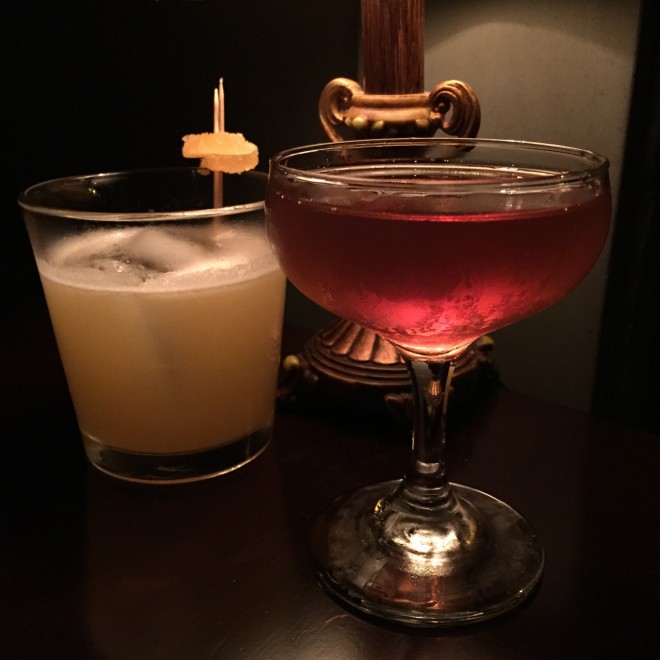 The bar proudly embraces a vintage apothecary shop vibe. It’s cute, but the drinks are great, and it’s a nice spot to hole up after a busy day.

Read on for part two and part three of our Cincinnati weekend!

Disclaimer: hotel accommodations were provided by CincinnatiUSA. Photos and opinions are my own.

Filed Under: Beyond, Travel
Tagged With: beyond breakfast, Cincinnati, cocktails, Ohio, Over-the-Rhine