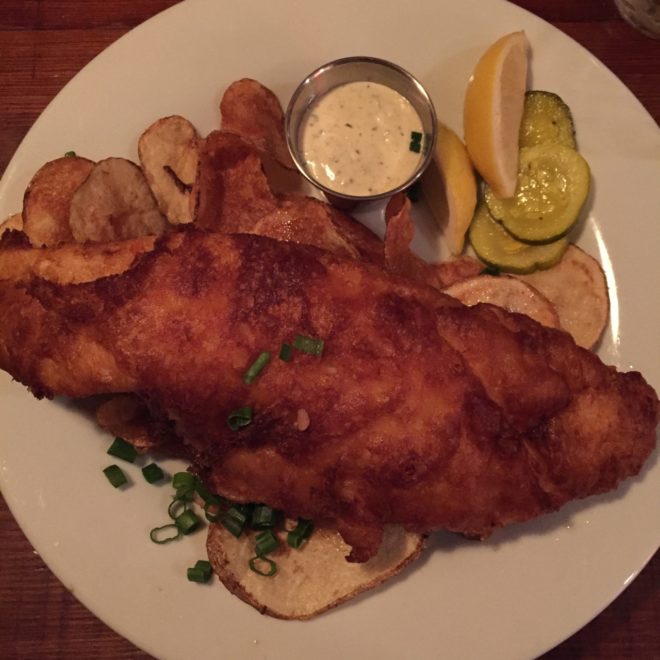 We’re continuing our St. Louis explorations! You can read about breakfast at Goody Goody Diner or the first part of our adventures to City Museum, Fitz’s, the Gateway Arch, and more. One evening the adults were able to go out together, and we headed to Dressel’s Public House for charcuterie, fish & chips, and drinks. (And Columbus folks, it’s a block away from the Jeni’s Ice Cream.) 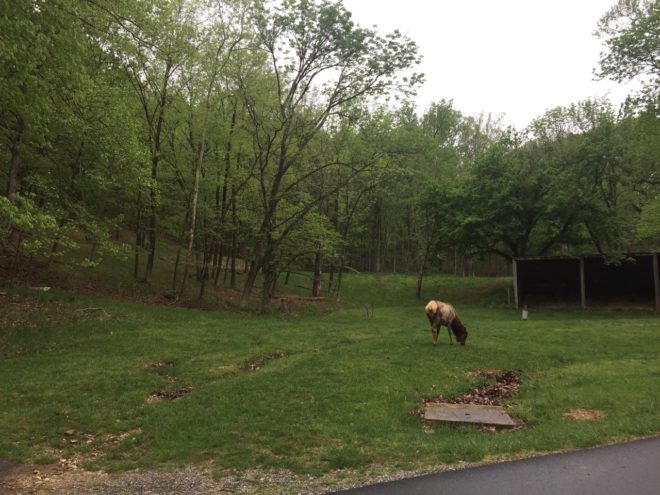 The next day we all headed west to the Lone Elk park, where you can drive through and spot elk and bison in the rolling hills. 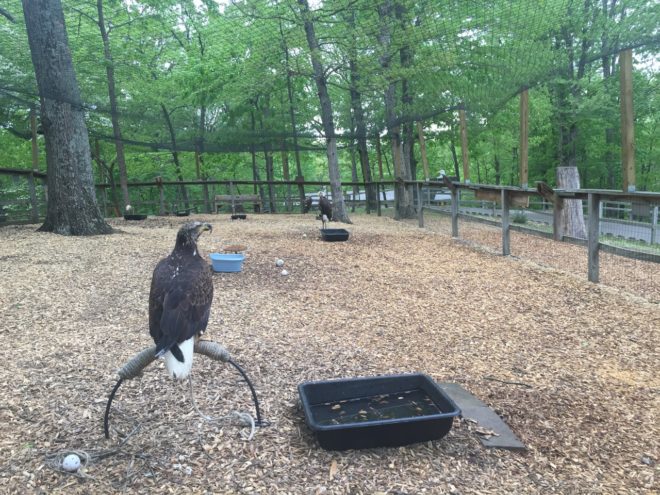 The Lone Elk park is right next door to the World Bird Sanctuary – the perfect place to take our owl-loving five-year-old. We’ve been to the Ohio Bird Sanctuary up near Mansfield, but given its “world” designation, it’s no surprise that this spot was much bigger and stretched much further through the woods. 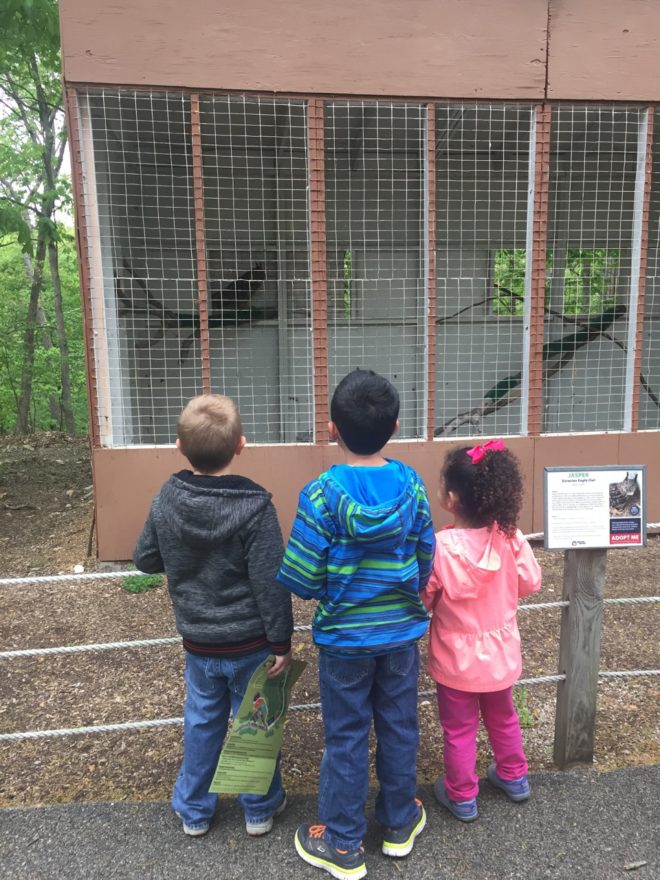 There’s a gift shop, a bird hospital, and rows and rows of giant cages filled with birds of prey, from owls to ospreys to eagles to crows and beyond. This Eurasian eagle owl hooted away at us (and Owen hooted back, of course). The selection of birds was really amazing, and you can get really close to them. 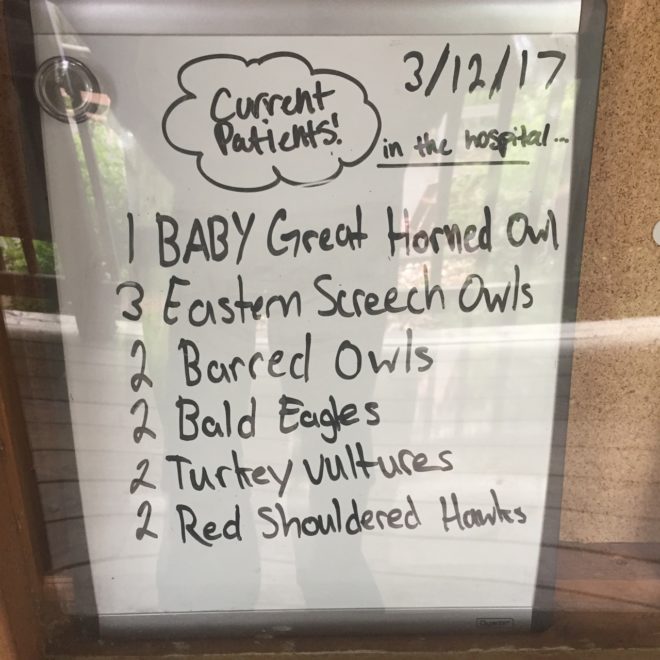 The hospital is situated in the middle of the park, with some small windows were you can occasionally spot birds being treated. Many of the birds at the sanctuary have been injured and are being nursed back to health. If you watch the sanctuary on social media, they show bird releases from time to time, although some birds are injured badly enough that they can’t live on their own anymore. 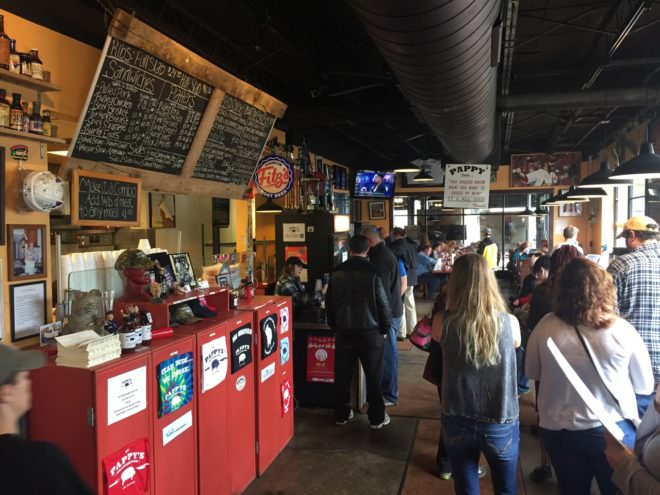 After the bird sanctuary tour we headed back into St. Louis to one of the culinary highlights of the trip: Pappy’s Smokehouse. You had to figure we were going to get St. Louis barbecue in here somewhere, and Pappy’s came highly recommended by our family and by a bunch of friends.

The place was packed, although the line moved quickly. We were met at the door by a gentlemen who was handing out menus and helping the line form. You wait in line until you come up to the counter, then you order and they help you find a seat. At times the cashier paused ordering briefly so she could wait for tables to clear. 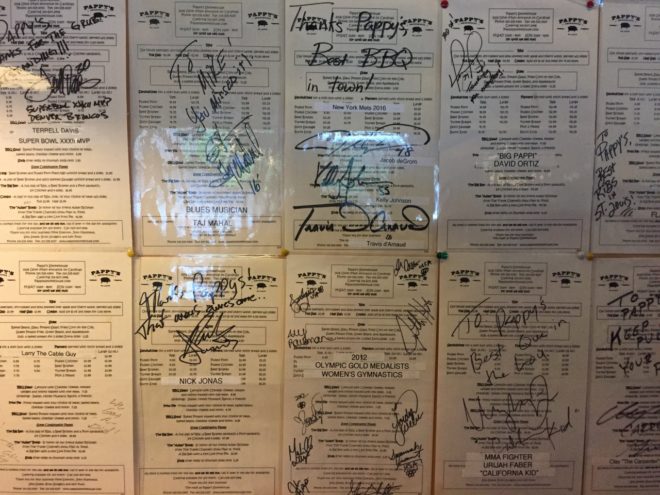 The walls are plastered with menus signed by famous people who have eaten there. 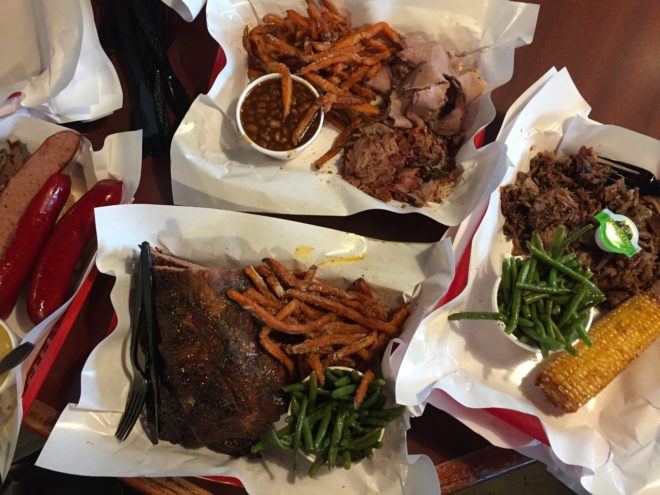 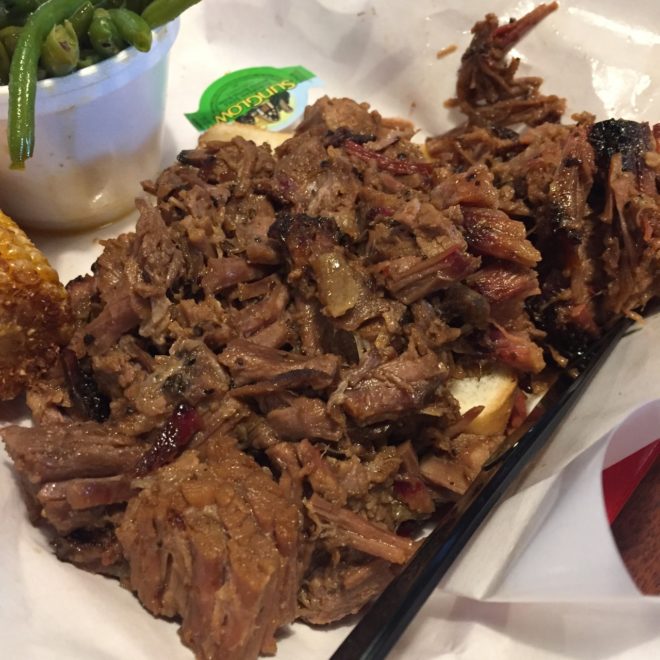 The highlight for me was the burnt ends, which are trimmed from the end of the brisket. They’re sweet and smoky and crispy.

For us, we’re spoiled by Ray Ray’s Hog Pit in Columbus, and everywhere we go we always compare BBQ to it. “Well, it’s good, but not as good as Ray Ray’s.” But Pappy’s was one of the first places we’ve been in a long time where we didn’t automatically draw the comparison. Not to say one was better than the other – just to say that the experience at Pappy’s was top-notch. 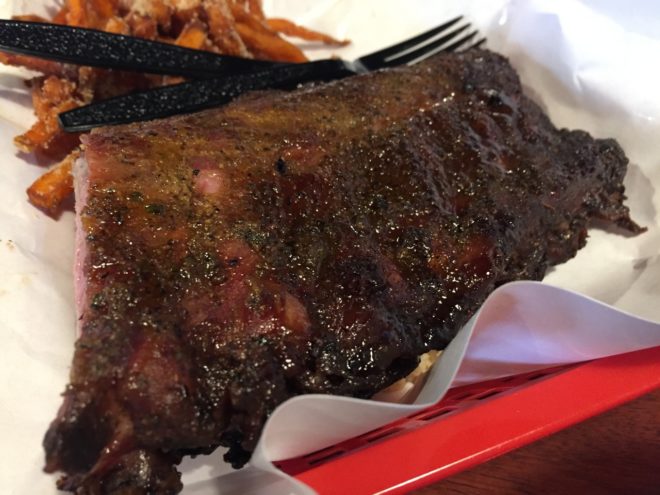 We also ordered some St. Louis style ribs, which are pork ribs with the tips removed. They were sweet and salty and delicious, just falling off the bone. 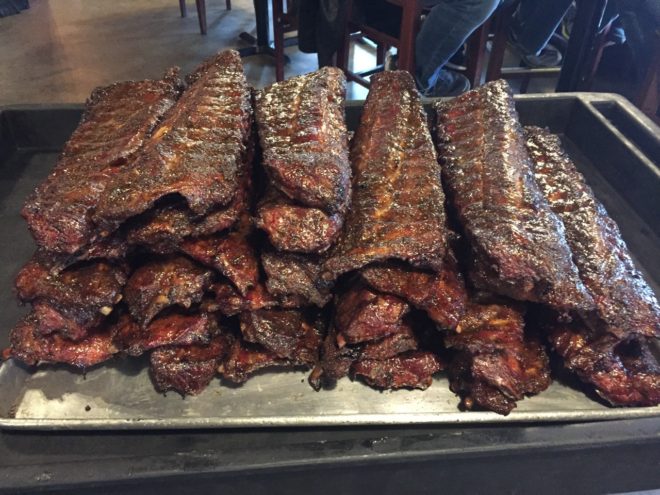 And Pappy’s obviously goes through a lot of them. We spotted an employee wheeling a cart full of them from the smokers. 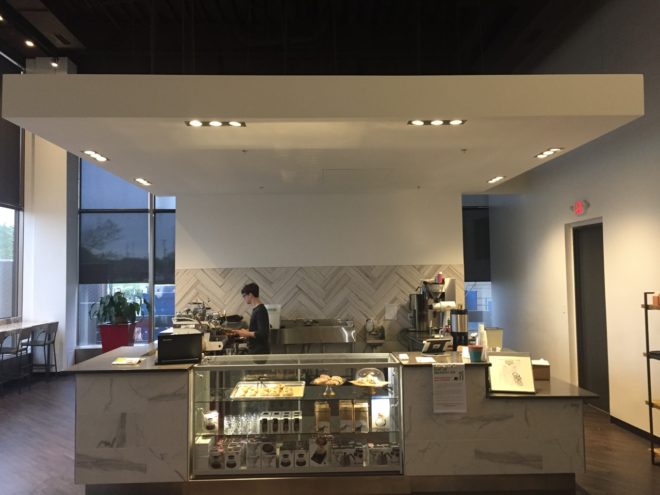 We had already visited Sump Coffee, but on another drive we stopped by Coma Coffee Roasters for cortados, too. They have a tall space at the bottom of an office building on the west side of St. Louis. 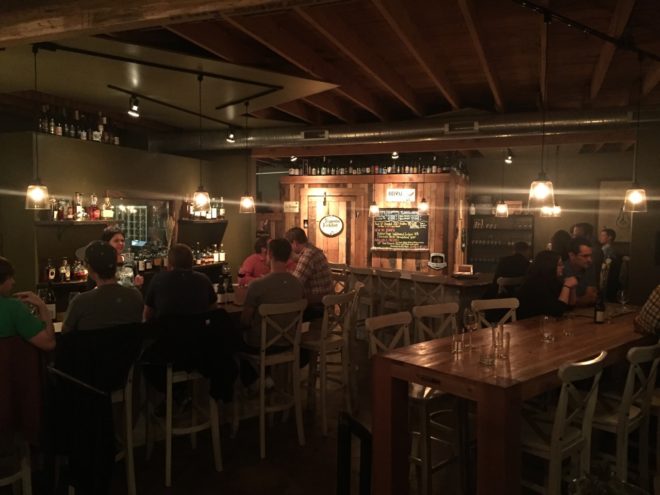 One evening my brother-in-law Evan and I went out for beers. The top of the recommendations was Side Project Brewing; we visited the The Side Project Cellar, their tasting room and whiskey bar. 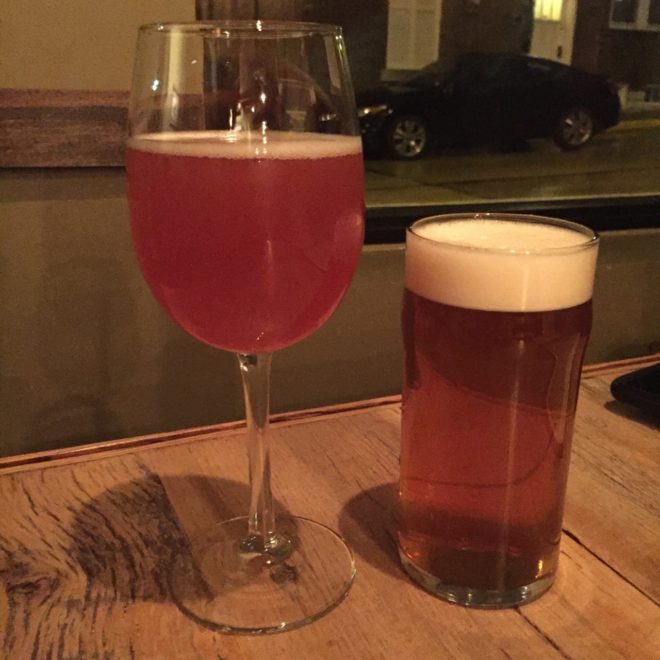 The cozy taproom was quiet when we arrived, but by the time we left they were hopping. Side Project is known for their sours and farmhouse ales. We tried a couple different beers – both theirs and others – including Side Project’s Blackberry Biere Du Pays and the Grisette Batch #4. 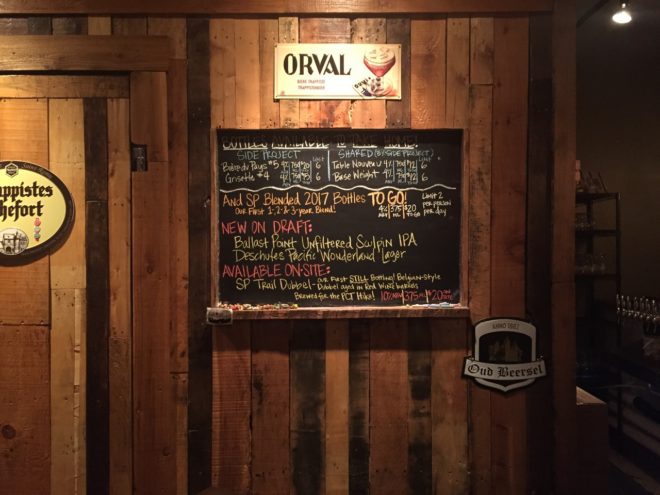 The tasting room features a huge whiskey selection, too, as well as a big collection of bottled beers to take away. 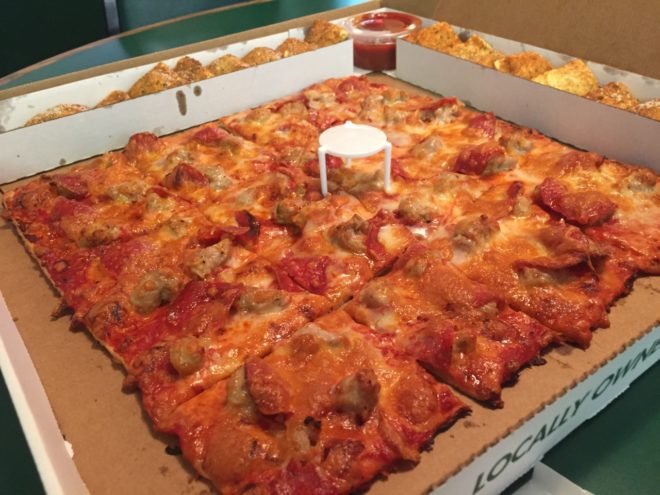 After beers we were hungry for another staple: St. Louis style pizza. We found an Imo’s nearby; Imo’s is a popular local chain serving up the city’s signature pies. St. Louis style pizza is nothing fancy: it has a cracker thin crust, it’s cut into squares, and it’s topped with provel cheese, a processed blend of Swiss, cheddar, and provolone that’s really only found in St. Louis. It’s soft and creamy.

We also sampled another popular St. Louis bite: fried ravioli. Why is this not more of a thing?! 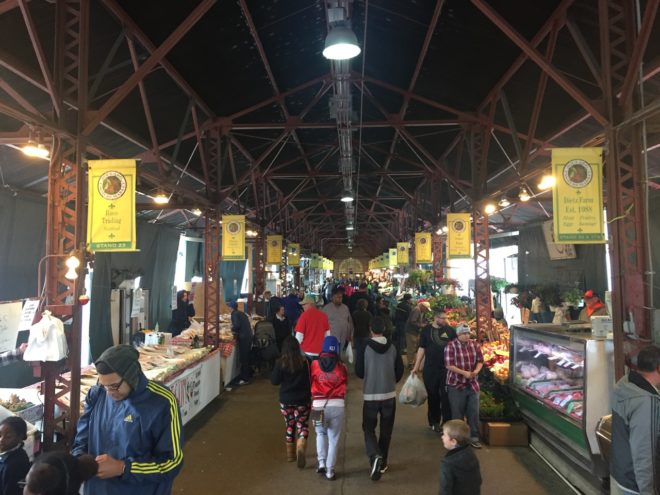 For our final morning in St. Louis we visited the Soulard Farmer’s Market, close to the riverfront. The signs say there’s been a market on since 1779.

I feel like we’re missing one of these old markets in Columbus. I know we have the North Market, but we don’t have anything to rival these big, old market halls like Soulard or the West Side Market in Cleveland. It was a joy to stroll up and down the long aisles of Soulard. 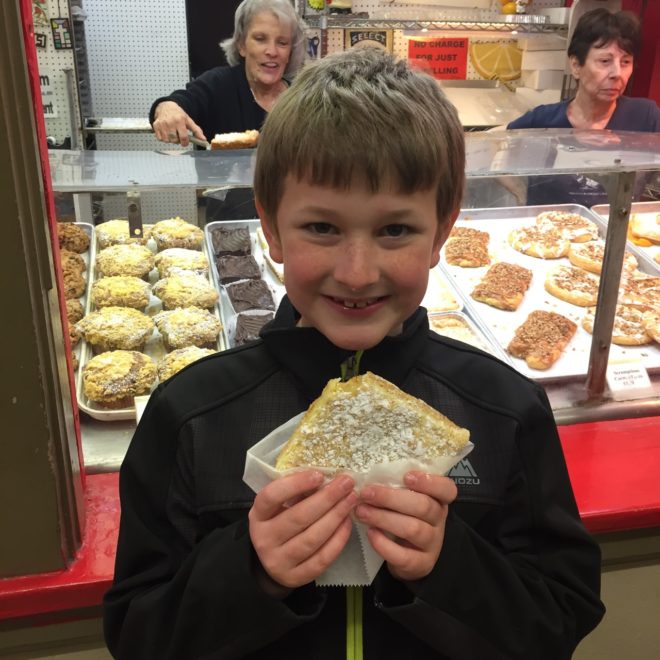 We stopped for another taste of St. Louis: gooey butter cake, a thin and dense cake made with lots of butter and dusted with powdered sugar. 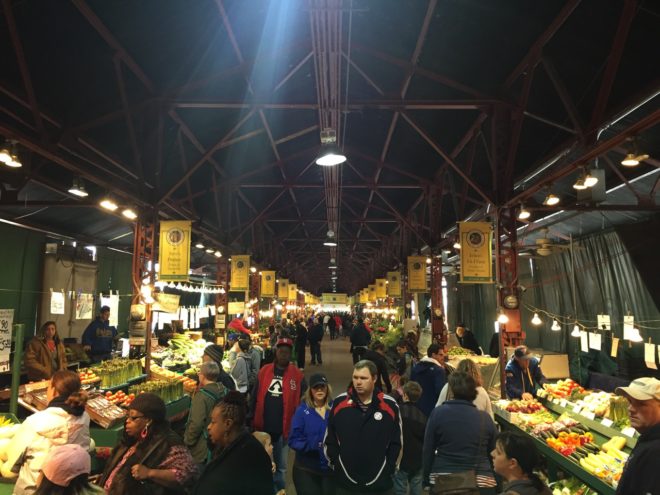 The Soulard Market is organized like a giant H. Most of the aisles are open on the sides, although there’s an interior section in the center. We found everything from breakfast burritos to flowers to Cajun food to coffee to produce to live chickens. 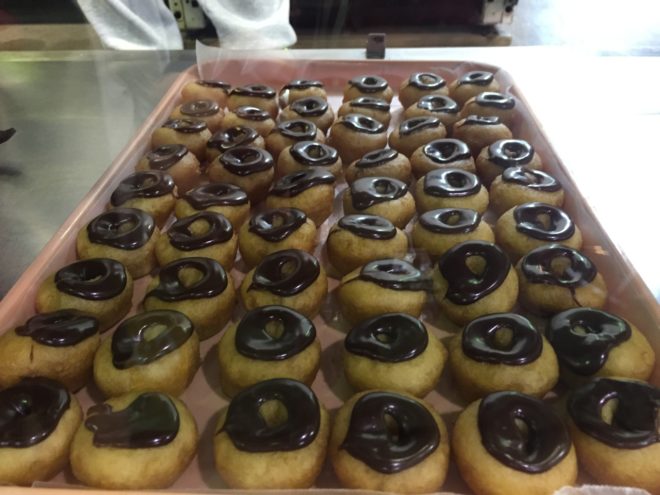 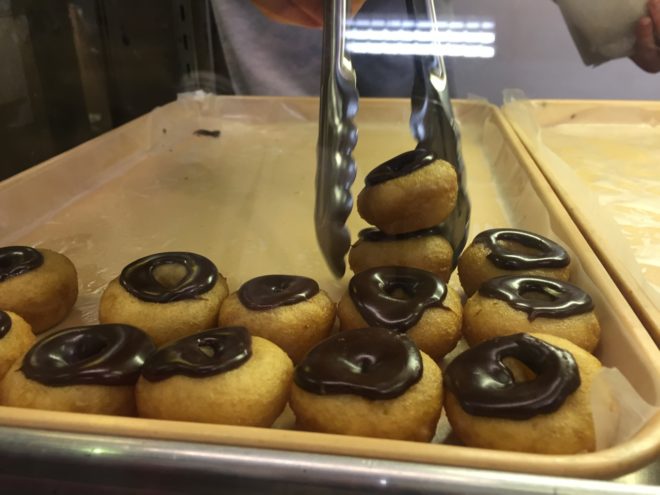 They rolled off a small fryer, and you can order a dozen to take with you in a bag. 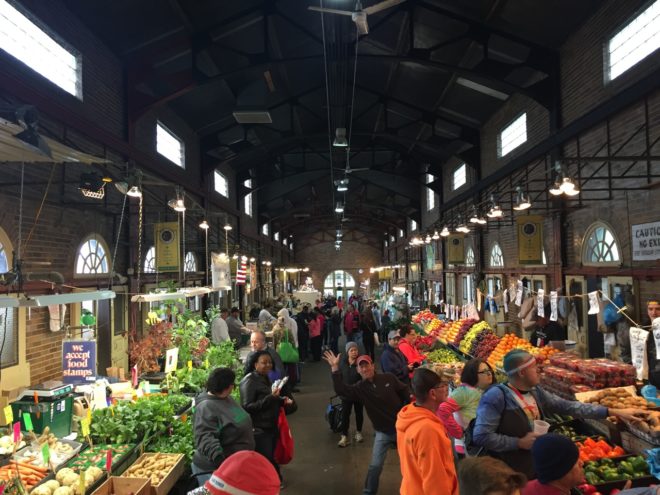 Nothing beats the sights, sounds, and smells of a farmers market on a busy Saturday. 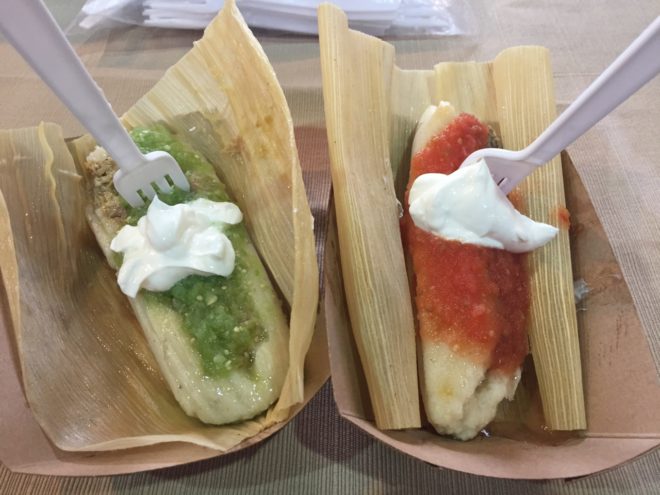 On the way out we discovered a stall serving up really amazing home-made tamales. 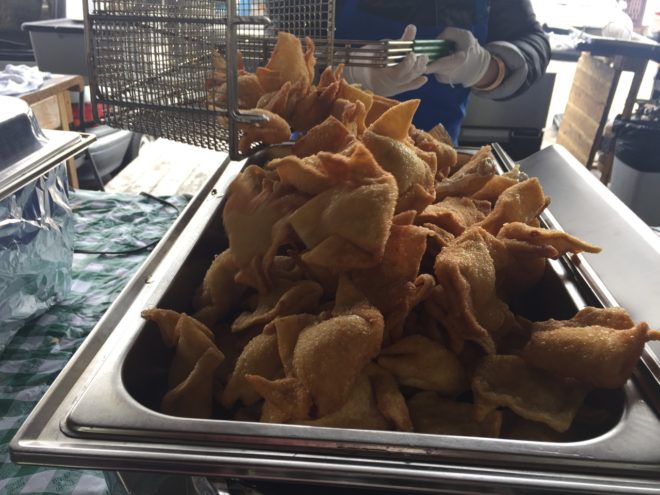 And we caught an Asian stall with egg rolls, crab rangoon, and more. Gotta love the moment when they pour out the basket of fresh fried treats.

It was a joy re-discovering St. Louis and all of its sights, sounds, and tastes. We’re happy to have family there, and are looking forward to many return trips.

If you didn’t already, read about our breakfast at Goody Goody Diner or catch up on part one of our trip.