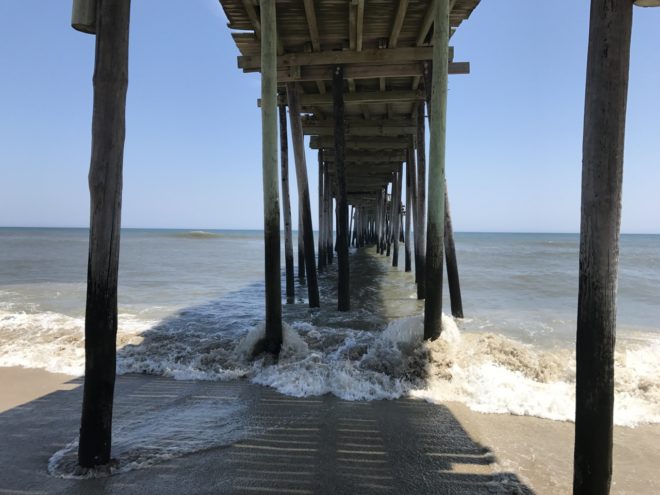 Almost every year we make the journey down to the Outer Banks of North Carolina, and it’s always fun to share our adventures. We stay farther south on Hatteras Island; the northern areas of Duck, Corolla, Nags Head, Kitty Hawk, etc. are very popular and tend to be busier. Hatteras is a little rougher and spread out, mainly because large portions are National Seashore. 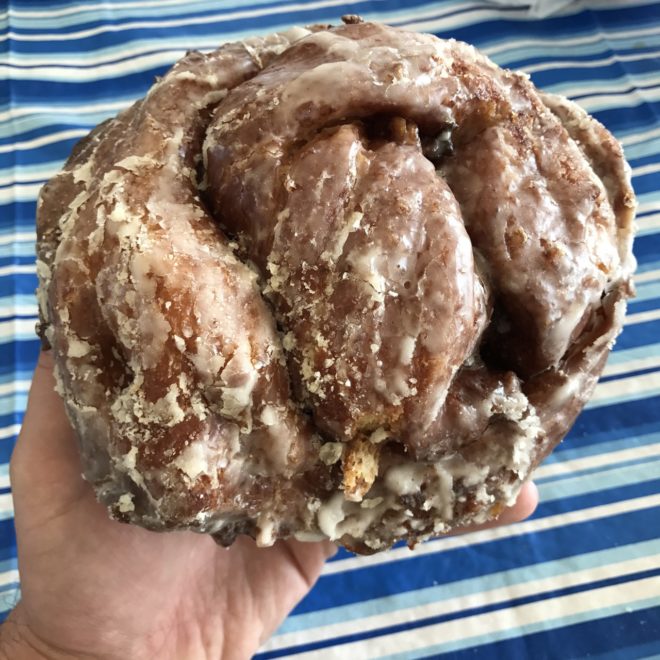 We spend a lot of time just on the beach, but we have a lot of favorite activities and eats around the island. It’s inevitable that we’ll make a couple trips to the Orange Blossom bakery in Buxton, known for their giant apple uglies (aka apple fritters). 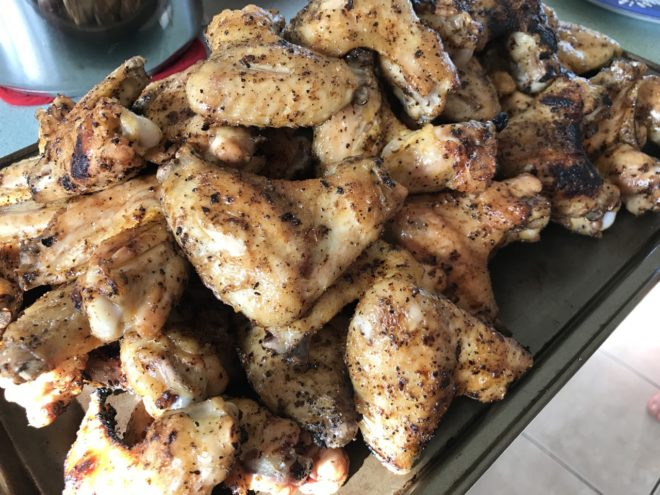 It’s a big group so we make a lot of dinners at home, including grilled wings for Father’s Day. 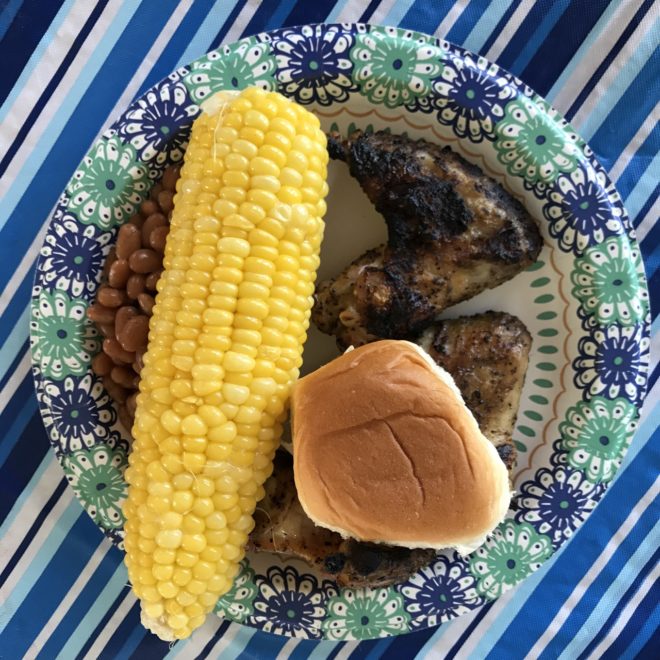 Which paired nicely with beans, rolls, and corn on the cob. 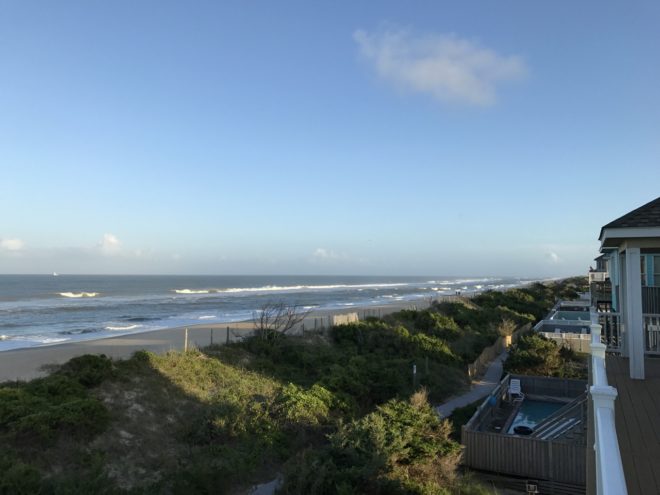 And it’s nice, whenever possible, to just sit out on the deck and read or enjoy the view. 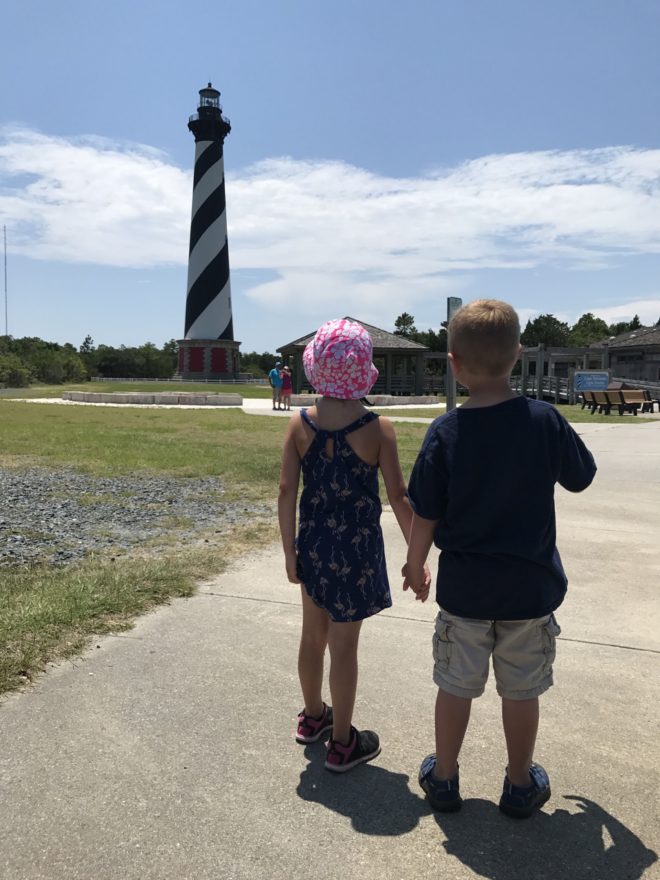 One of our favorite sites is the Cape Hatteras Lighthouse, the iconic candy-striped structure. I love the tradition of climbing to the top. The view never changes, but I never tire of re-visiting it. 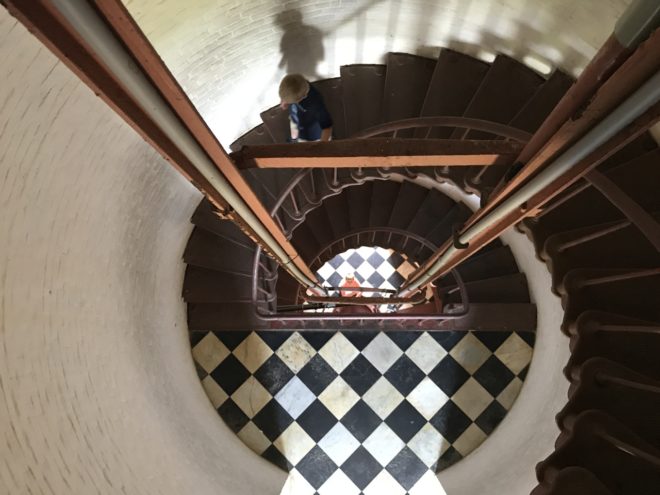 It’s a beautiful structure inside and out, with metal staircases winding up to the top and black-and-white checkered floors at the landings. 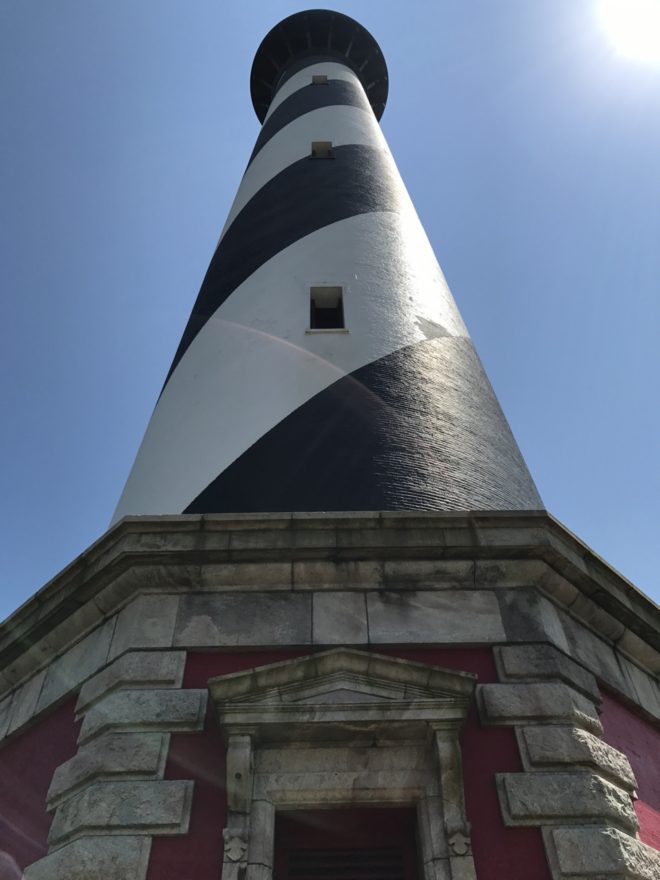 There’s such beautiful detail in every aspect of the lighthouse.

Click on the image to see a panoramic from the top. This is looking northeast, back toward the original location of the lighthouse. It was moved in 1999 to get it away from the encroaching ocean. 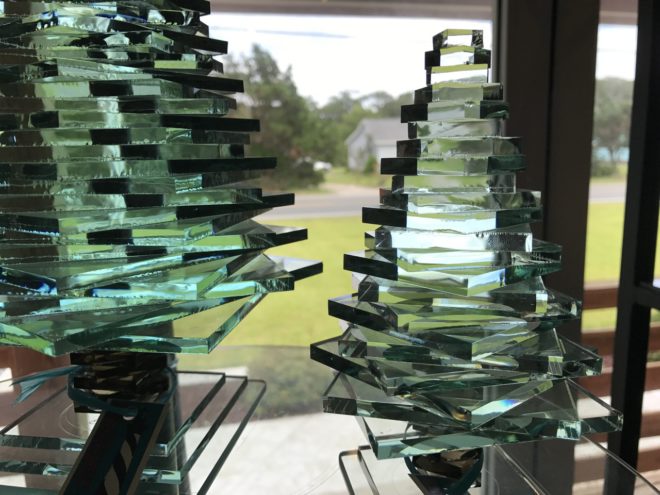 We’ll also spend an afternoon or two driving up and down the island, stopping at the galleries and shops in Buxton, Frisco, and Hatteras Village. 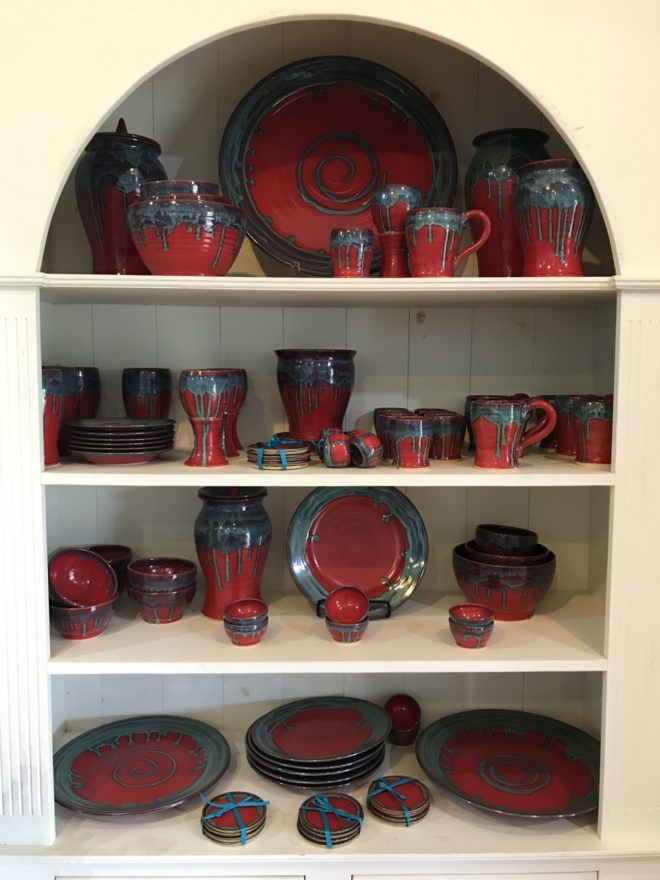 Many of the goods are made by local artists. 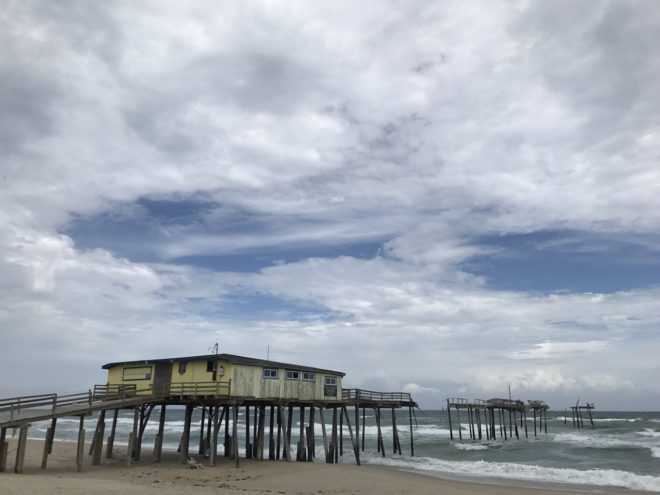 This year we briefly stopped at the Frisco Pier, officially the Cape Hatteras Fishing Pier, which has been damaged repeatedly by hurricanes over the years and has been shuttered. 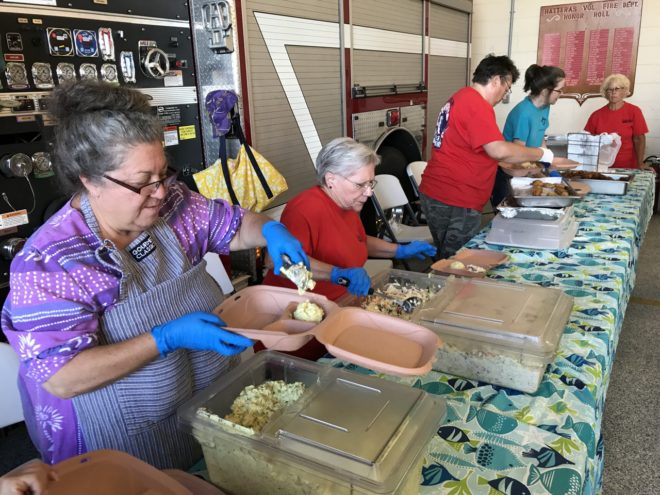 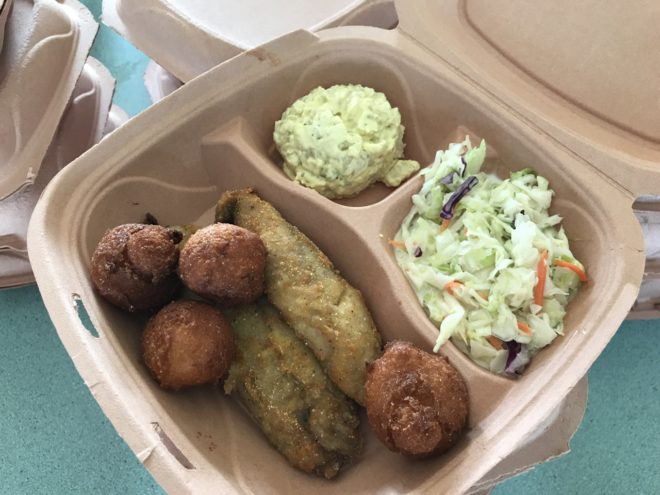 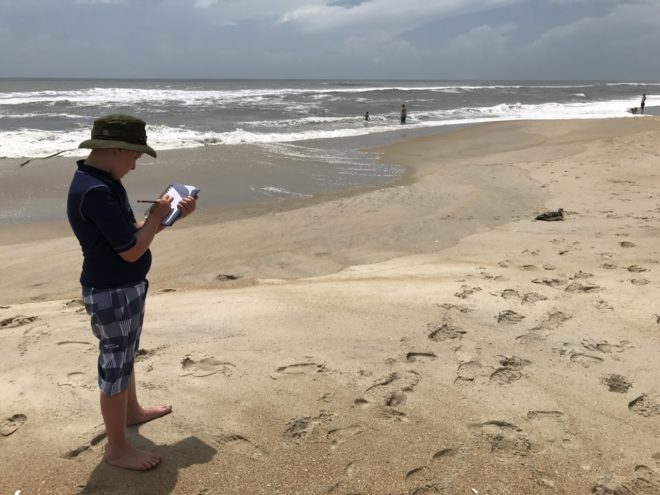 Days on the beach are a great chance to encounter wildlife we don’t normally see in Ohio. Will sketched a bird – what we first thought was a cormorant but later guessed was an anhinga – that beached itself for a while before riding some waves back out to sea. 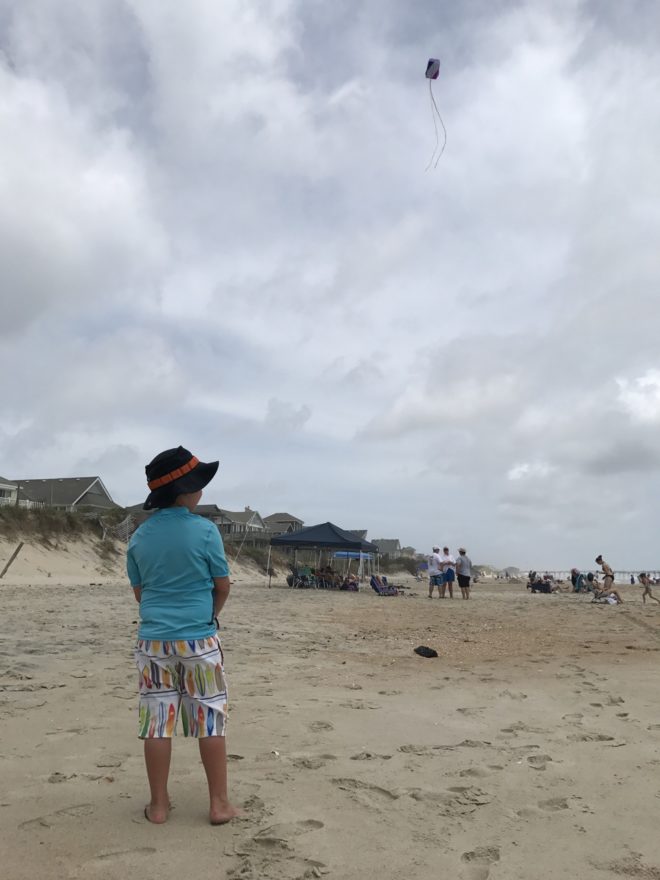 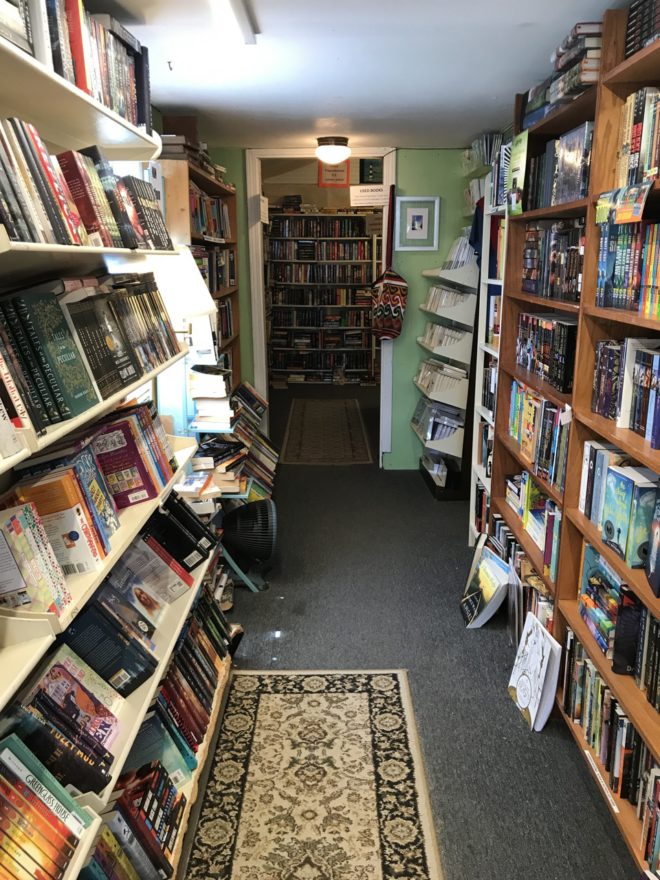 One of my favorite stops on the islands are the tiny bookstores, like Buxton Village Books or Books To Be Red on Ocracoke. 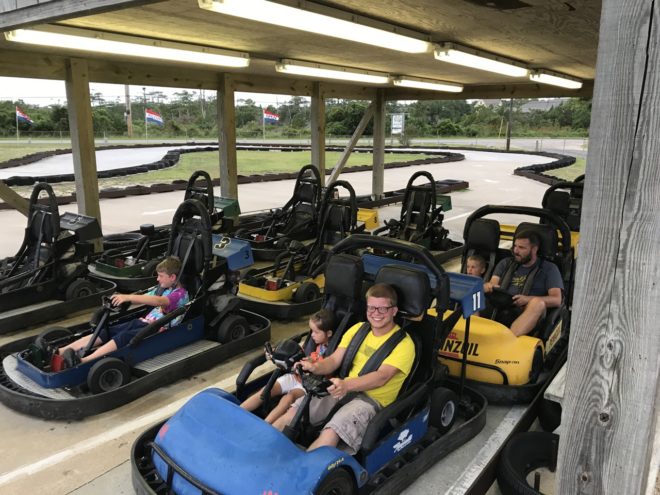 We usually make a stop at the go karts in Frisco. 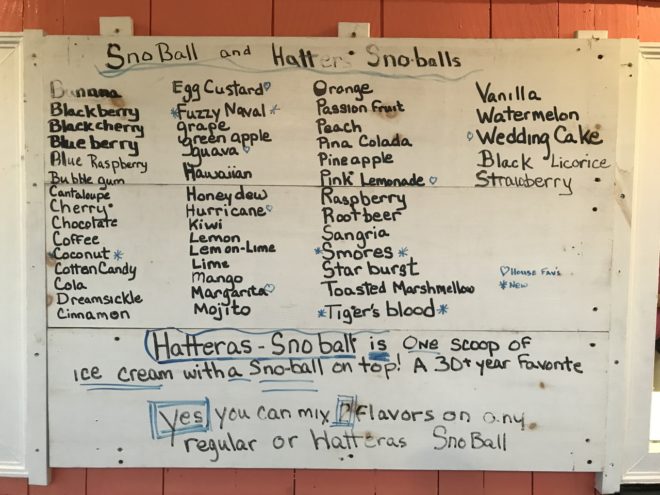 Often followed by a stop for sno-balls and ice cream just down the road. 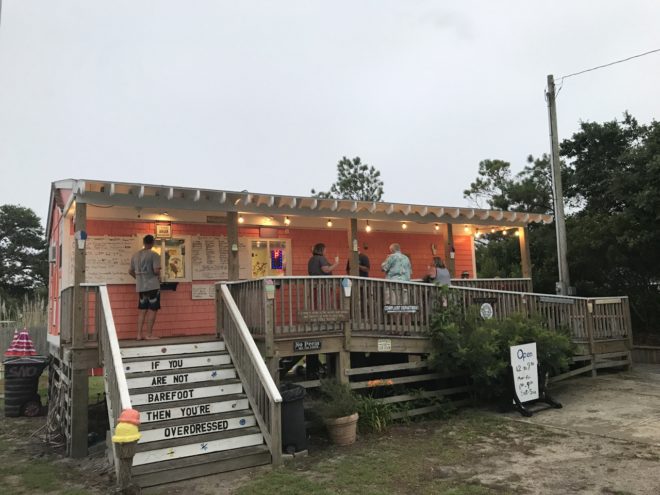 Hatteras Sno-Balls is one of those great little businesses along Hatteras Island. They’re easy to drive by but always worth the stop.

That’s the first part of our adventures this year! Read part two here!