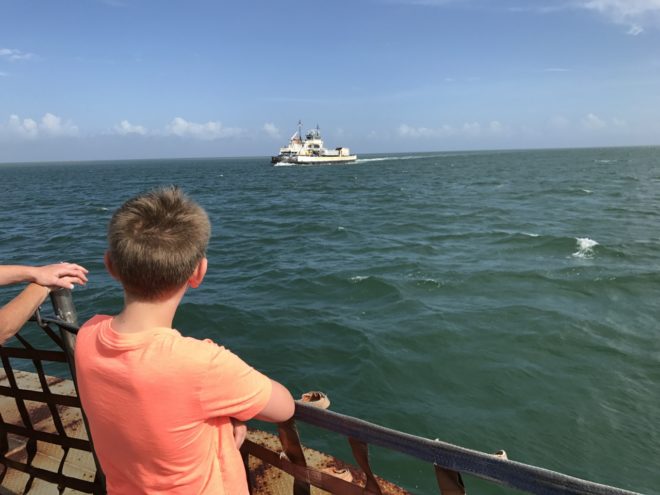 We’ve already talked about lighthouse climbs, giant apple fritters, and exploring art galleries in part one of this year’s OBX adventures. Whenever we can, we also trek down to Ocracoke Island, one of our happy places on the Outer Banks. Ocracoke is a small village at the bottom of a 13-mile long island that’s mostly National Seashore. It’s most accessible by ferry; we travel in from the ferry at Hatteras Village. 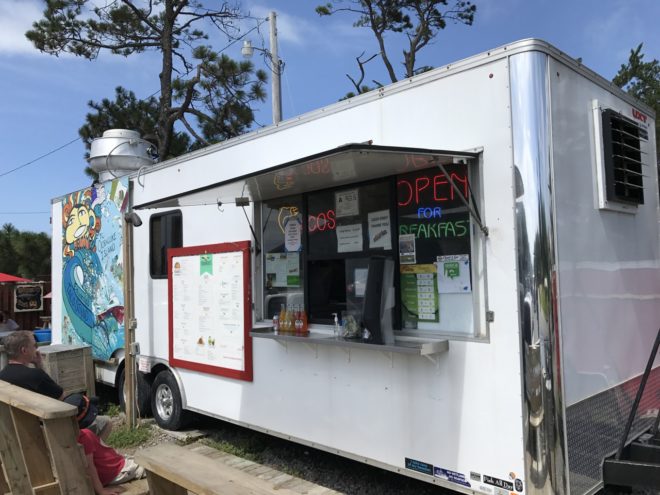 One of our first stops on the island, especially if we’re arriving in the morning, is Eduardo’s Taco Stand. Eduardo’s is a little truck serving up Mexican breakfasts right near the northern entrance to the village. 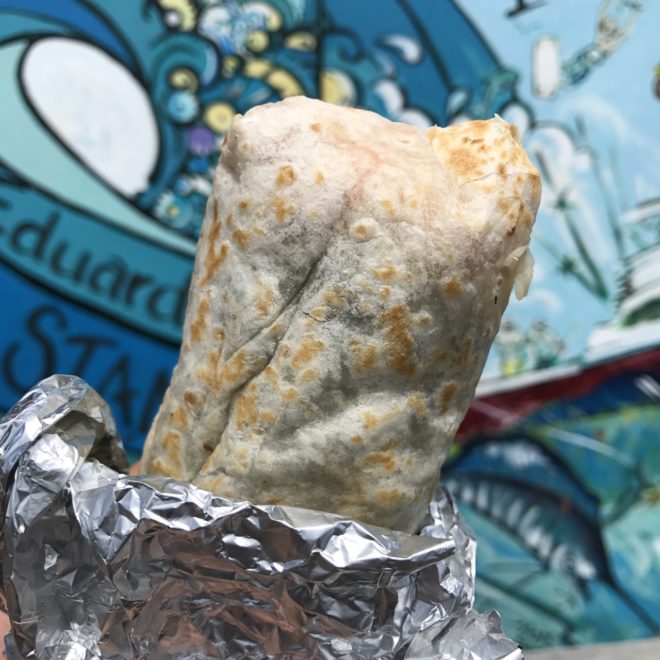 They also serve my favorite breakfast burrito ever, loaded with seafood, cheese, avocado, and egg. 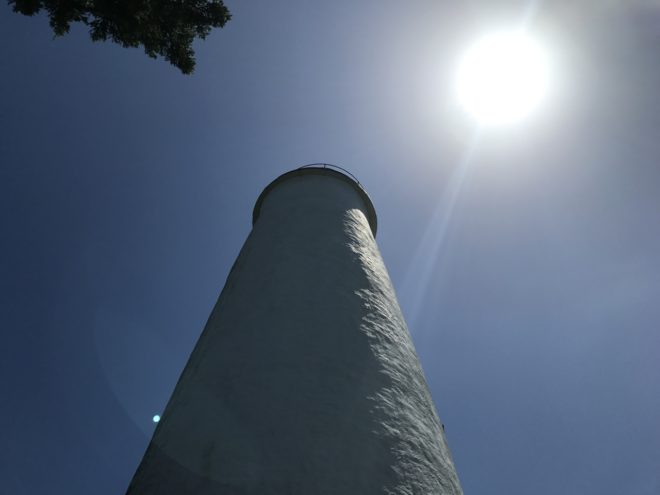 We rented some rickety golf carts and rolled around the village from store to store, landmark to landmark. We always have to stop and say hello to the Ocracoke Lighthouse. 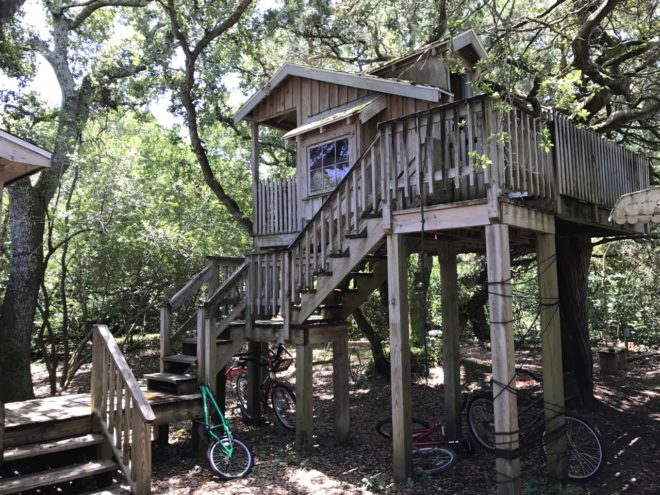 To get the best sense of the island, you need to travel through the back streets and shell-lined alleys amongst the houses. You’ll find these great little homes, all raised up to keep them away from floodwaters. Also, lots of bikes. 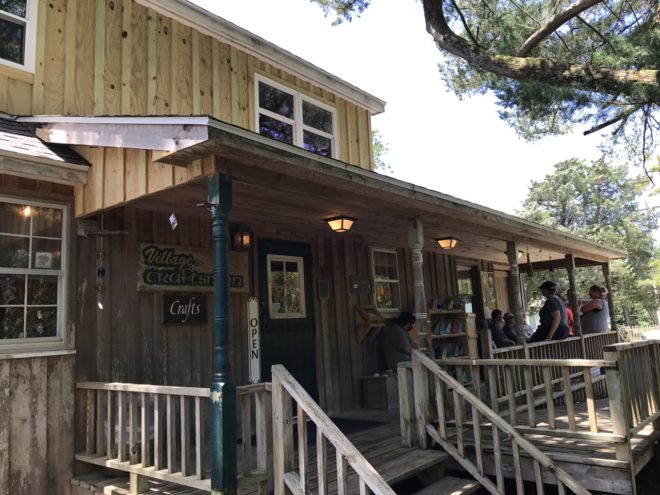 We always make a stop at Village Craftsmen, a decades-old shop tucked down Howard Street and run by the Howard family. Their family has a long history living in Ocracoke, and they’ve always been very vocal about telling the stories of the island. 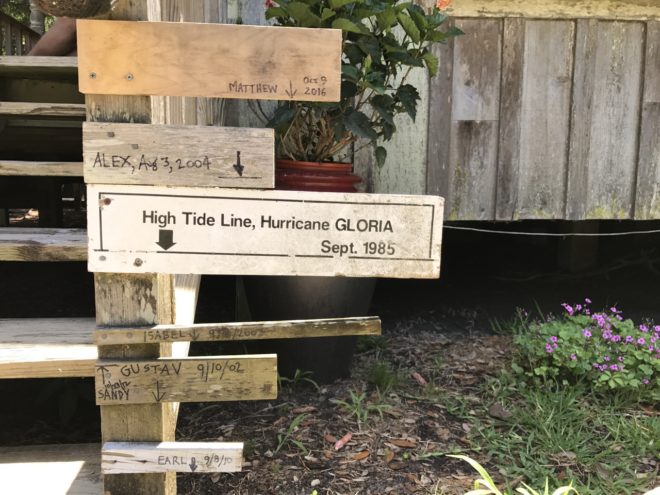 The wooden chart at the foot of their stairs marks the high water line of major storms. You can see Hurricane Matthew set a new record in the fall of 2016. 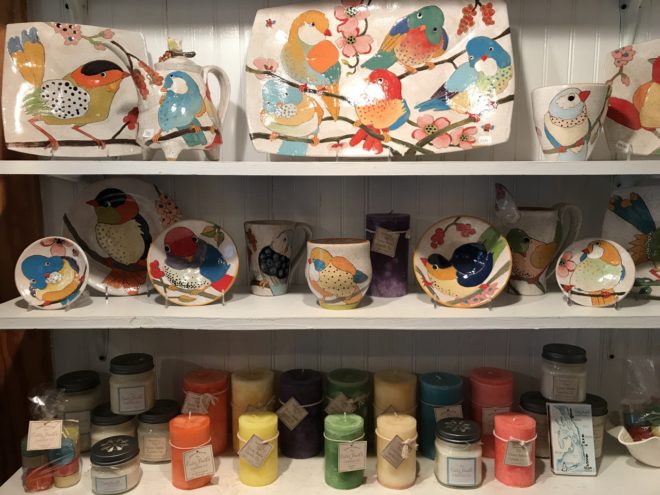 Village Craftsmen is fun to explore, with shelves lined with pottery, paintings, maps, music, and more. 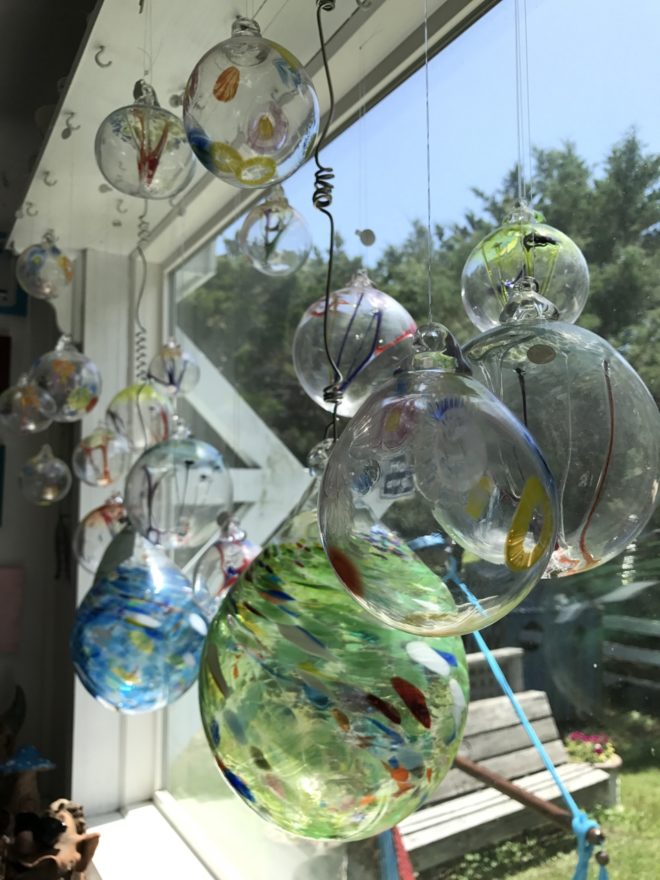 Like many of the shops on the Outer Banks, they represent a lot of artists from the region. 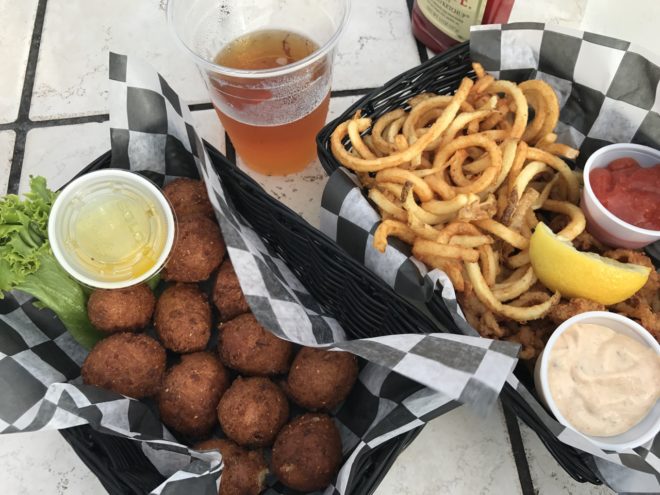 We rounded out the day on Ocracoke by swimming on the beach – named one of the most beautiful in the world – then having dinner at SmacNally’s Raw Bar & Grill. The name is kitschy, but they serve a solid pub menu with lots of seafood, and seating overlooks the Silver Lake harbor. It’s hard to beat that view. 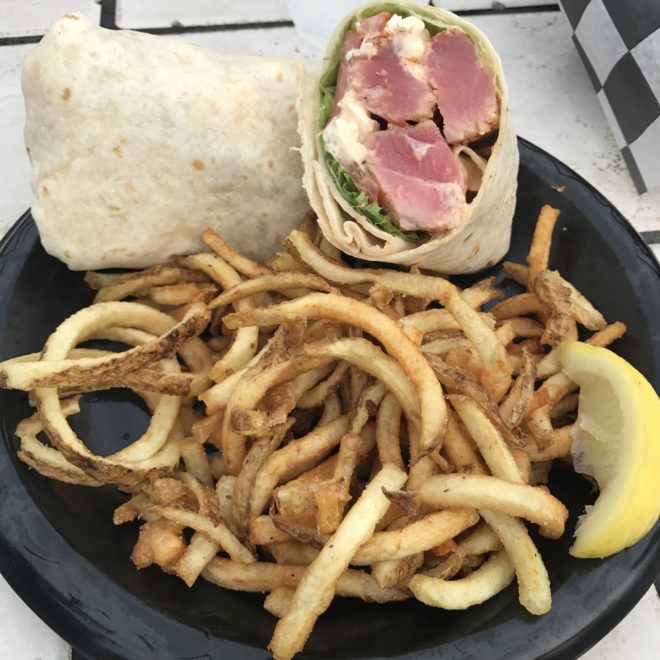 We had hush puppies, fried oysters, and tuna wraps. 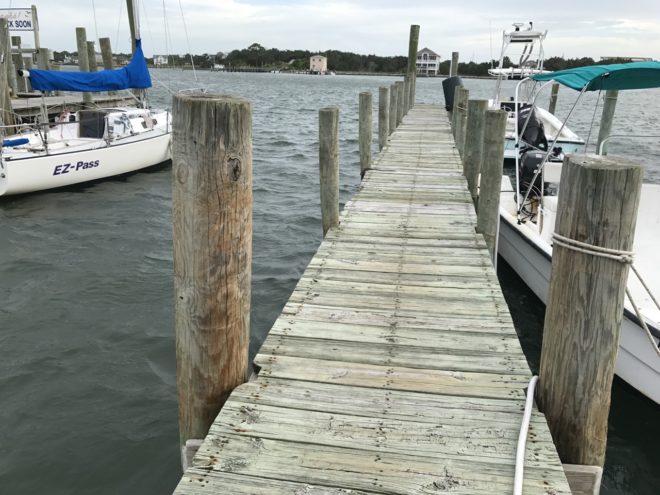 And afterward we walked around the docks to take in the view one last time. 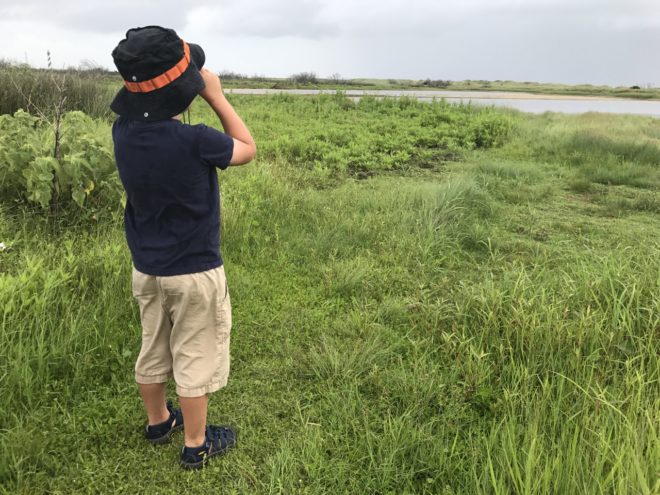 Every Tuesday morning at 8 a.m., from late May to the end of August, the Cape Hatteras National Park offers free morning bird walks. You meet a park ranger near ORV Ramp 44 just past the lighthouse, and they take you on a stroll through the area, pointing out different birds and chatting about the island ecosystem. So we took our bird enthusiast old man (read: our five year old) with his cousin and grandparents one morning. 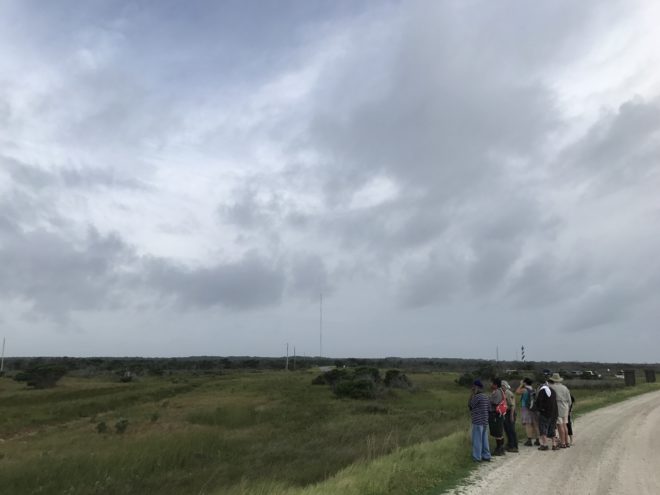 The park ranger was very knowledgable about area birds, even bringing some heavy-duty scopes to spot birds around the marshes farther out. It’s a beautiful and peaceful way to spend the morning, walking around the cape with the lighthouse in the background. 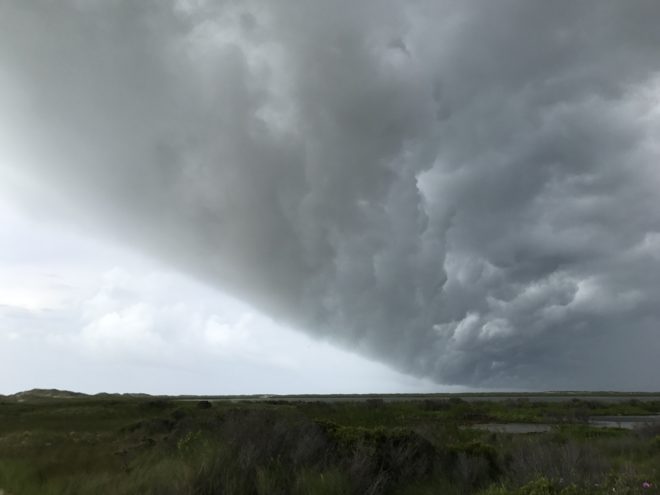 We got about an hour into the walk before we were chased away by storms rolling in. Still worth it! The NPS offers a lot of free programs exploring the history and natural surroundings of the cape. 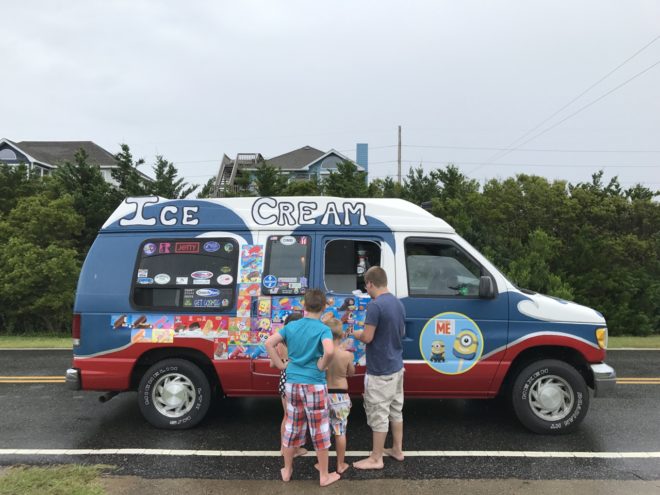 Back at the house, we snagged dessert one or two nights from the ice cream trucks that roll up and down the streets. It’s hard to miss the familiar song. 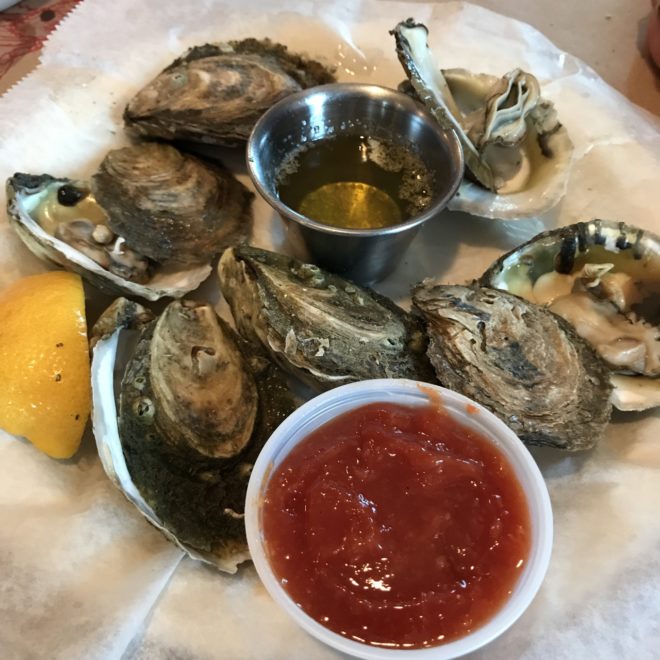 Another evening we all had dinner at Ketch 55 in Avon (also home to Stu’s Donuts in the morning). Beth ordered some oysters that were caught fresh off Ocracoke. We discovered, then, a phenomenon called oyster crabs or pea crabs, which are tiny crabs that take up residence inside oysters or clams. Yes, you can eat them, but boy did it smell funky. 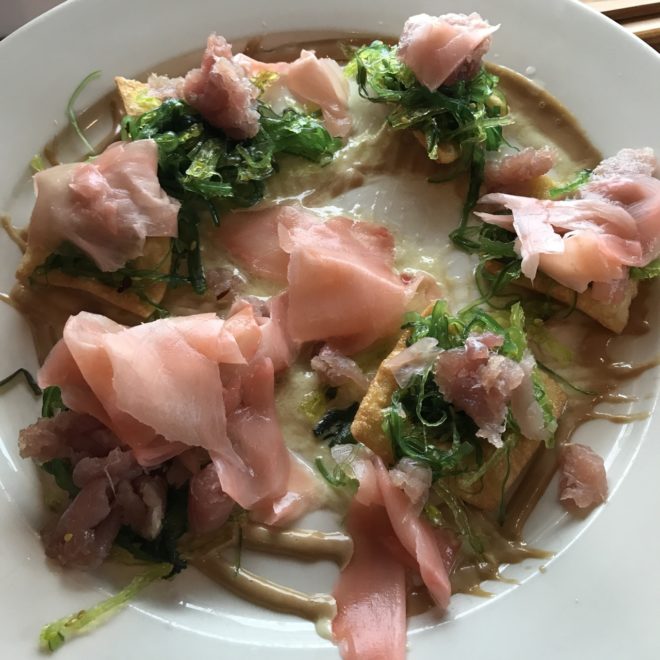 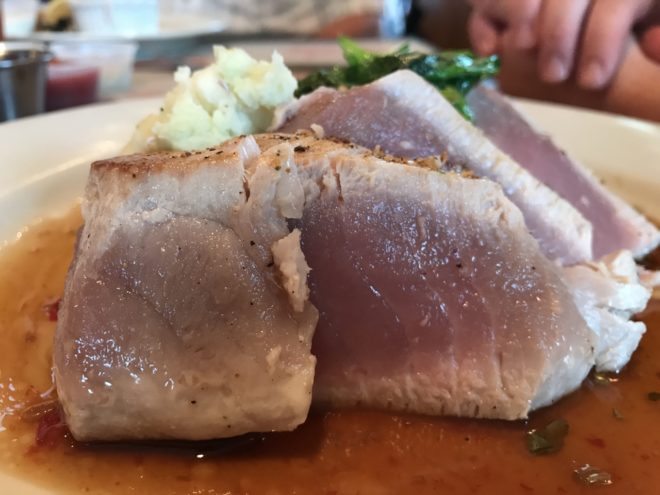 Or the Asian glazed tuna. When asked how we wanted the tuna done, our response was “just wave it over the grill.” 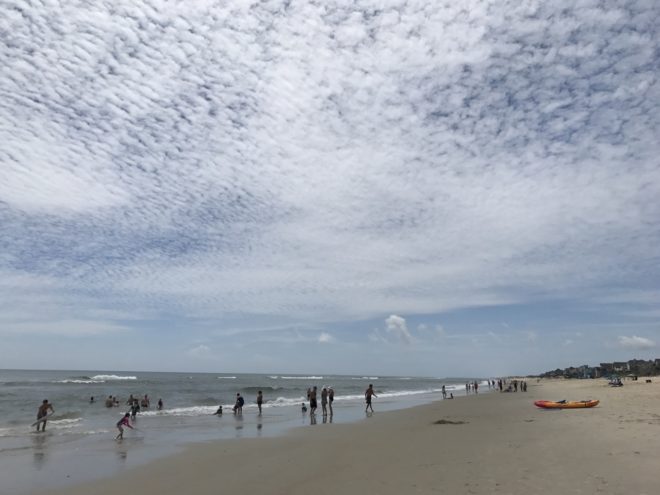 Another fun year at OBX is in the books. Until next time!

Read part one of our adventures here!