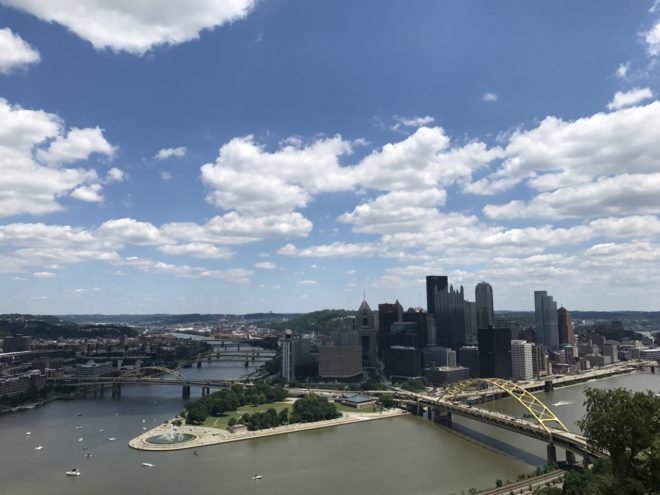 Ah, Pittsburgh. It’s been too long. Mrs. Breakfast w/Nick grew up a little north of the Steel City, and we used to visit more frequently. Now, however, my sister-in-law Abbey has moved there to open up a location of The Candle Lab in Lawrenceville, so we’re making the first of what I’m sure will be many trips to come. 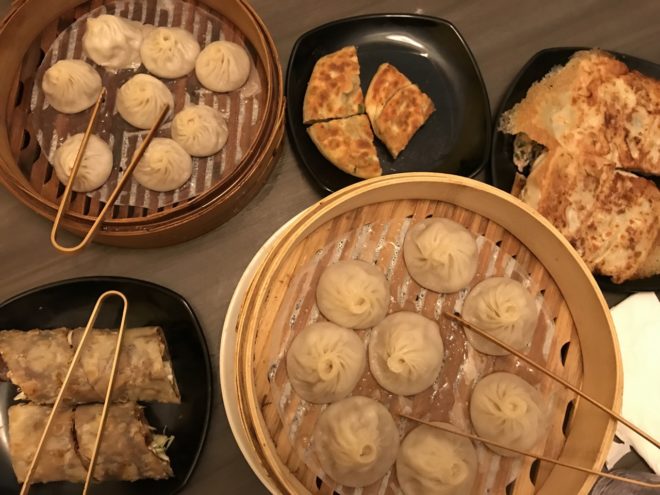 We found a great little one bedroom apartment in Lawrenceville through AirBnB and arrived in town Friday night. After we got settled we headed over to Everyday Noodles in Squirrel Hill, a place that Beth has sampled on previous visits. When you walk into the restaurant, you can see into the kitchen where they’re hand-pulling noodles and filling dumplings. 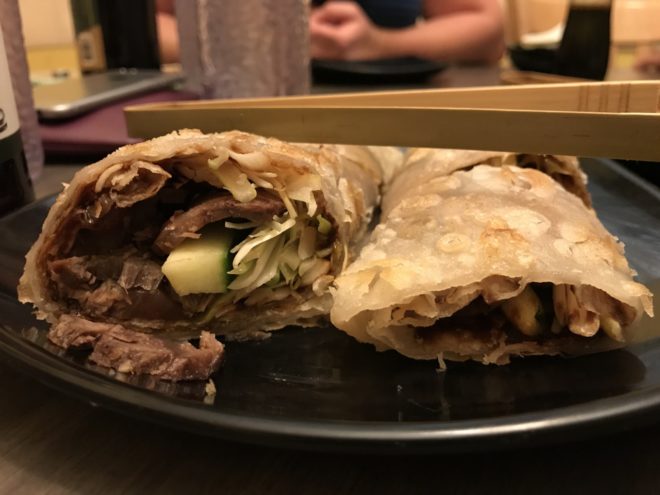 We ordered a little bit of everything for the table, including rolled onion pancakes with beef. 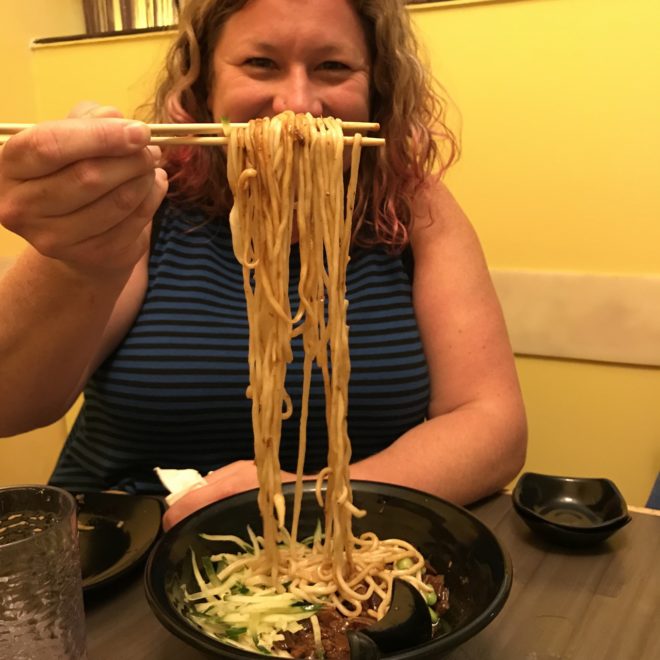 And plenty of noodles. 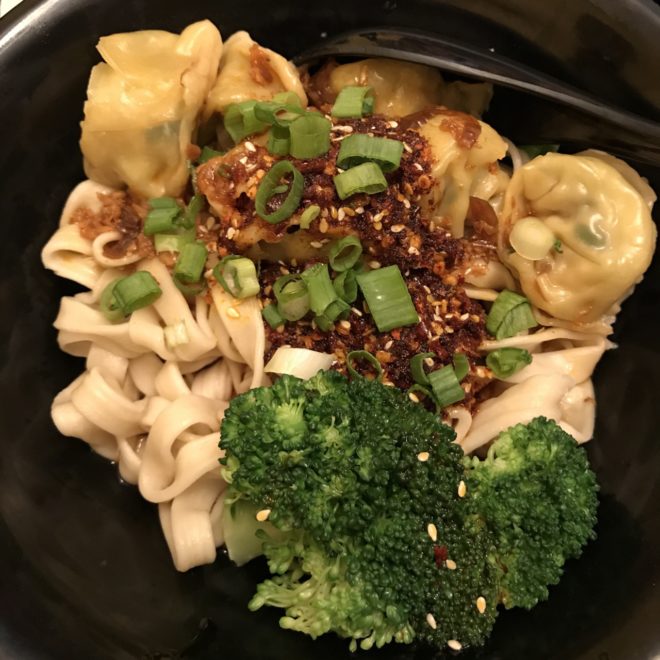 And bowls with both noodles and dumplings. 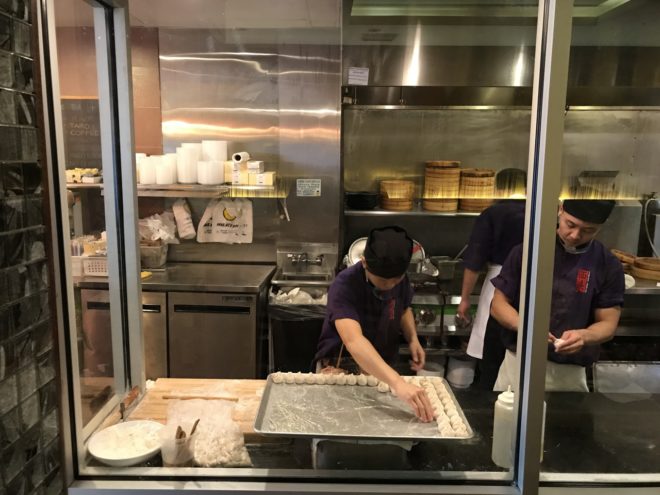 When we arrived they were pulling noodles, and when we left they were filling dumplings. It was amazing to watch how quickly they worked. 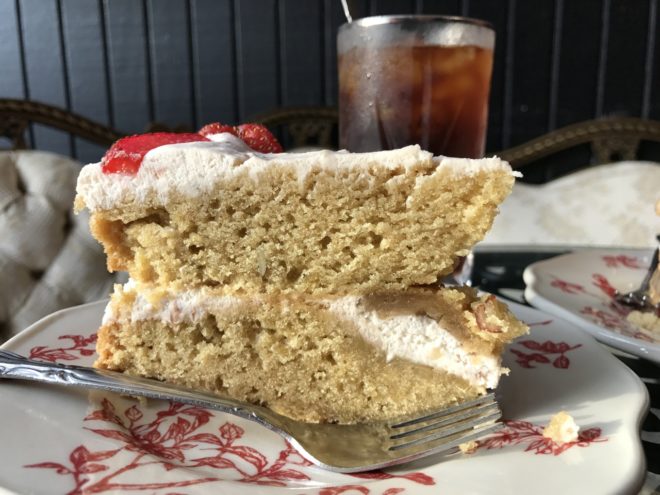 Post-noodles-and-dumplings we strolled a bit of Lawrenceville, stopping for dessert at the Butterwood Bake Consortium. I think we need more places like this in Columbus. It’s a small dessert cafe that serves espresso, cookies, brownies, cakes and pies by the slice. And they’re open late! 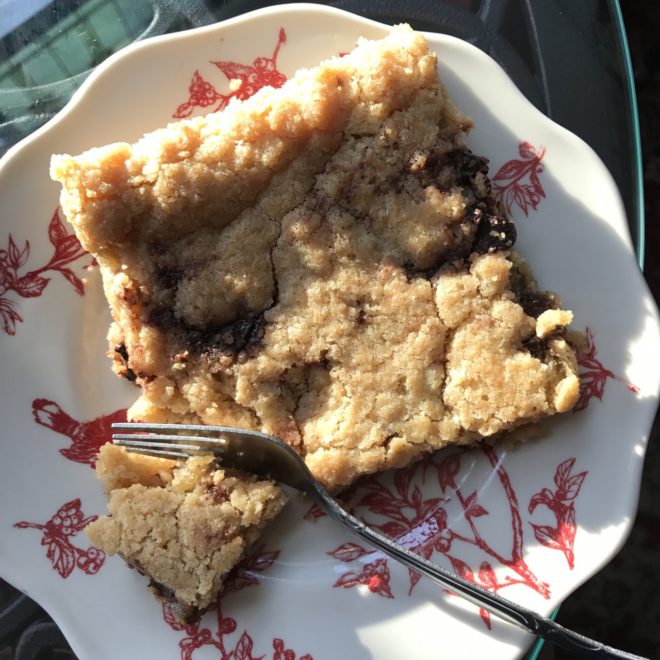 Also, their baked goods are both eye-catching and delicious. 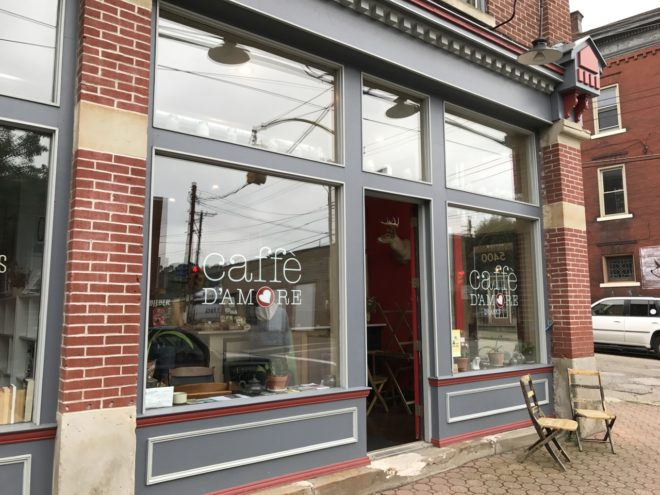 The following morning, Saturday, began quietly in Lawrenceville. One thing I love about traveling, especially to larger cities, is finding a local coffee shop I can walk to in the mornings. Coffee shops offer a great connection to a city. There’s nothing like seeing how a place wakes up and gets going, and seeing who shows up early in the mornings. I discovered Caffe D’Amore a couple blocks from the apartment, and we started each day with cappuccinos or cold brew. 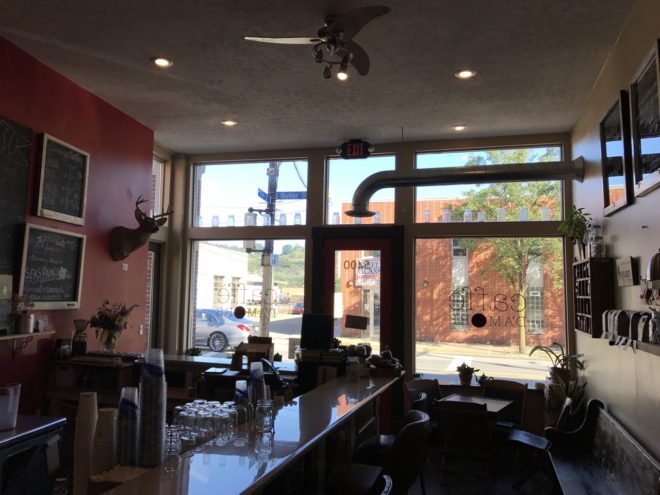 It’s one of those charming little shops serving coffee and snacks, with eclectic seating and artwork on the walls. It’s also connected to a bookstore in the adjacent space! 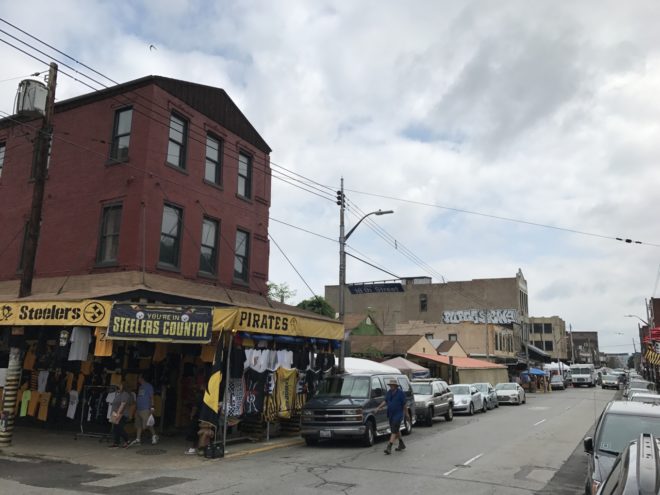 Our first stop Saturday morning was The Strip District. I never noticed before how Lawrenceville, The Strip, and downtown Pittsburgh are joined in one continuous line. You can start driving west on Butler Street through Lawrenceville and you’ll pass right through the Strip and on to the city center. 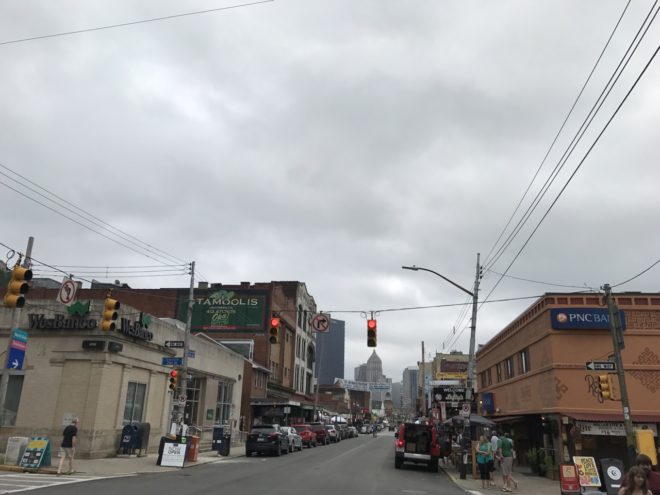 The Strip is collection of old restaurants, shops, delis, street vendors, and other businesses. It’s just south (but not directly – this is Pittsburgh) of the Allegheny River, surrounded by old light industry. 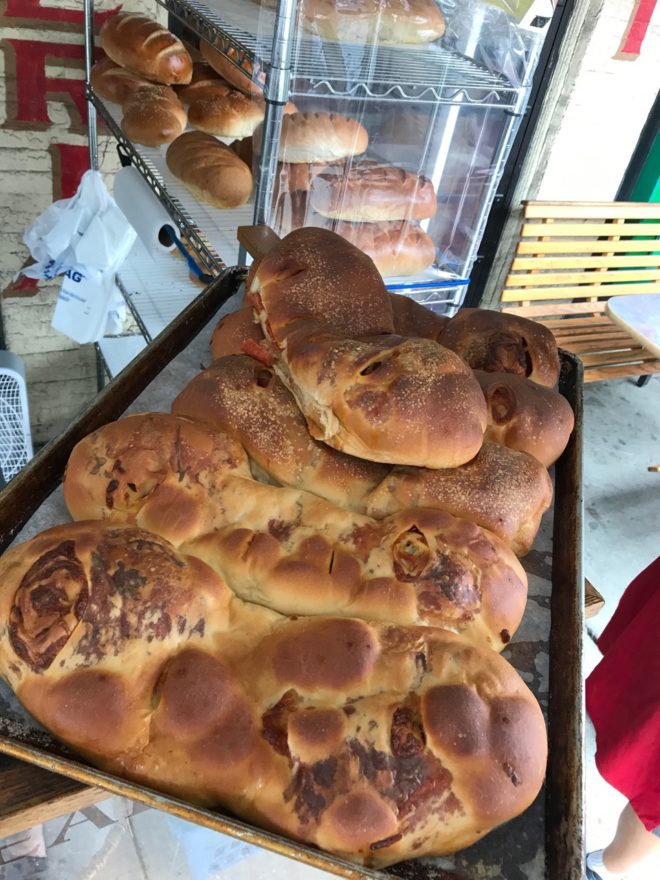 And it’s a great place to be on a Saturday morning, especially when fresh pepperoni rolls are coming out. 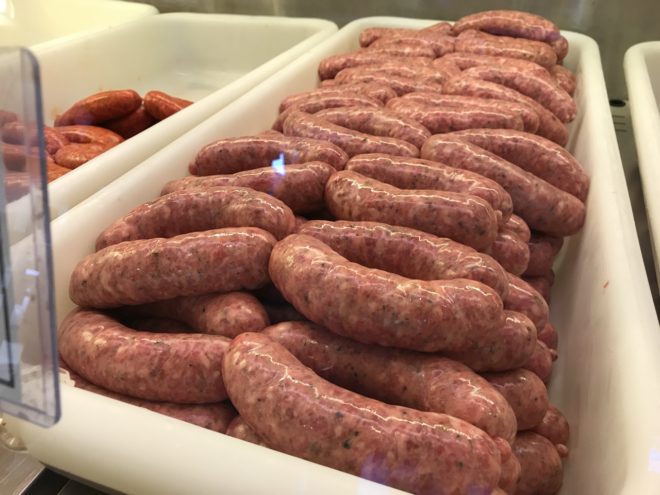 You can shop for everything from sausages and cheeses to candy and distilled spirits. 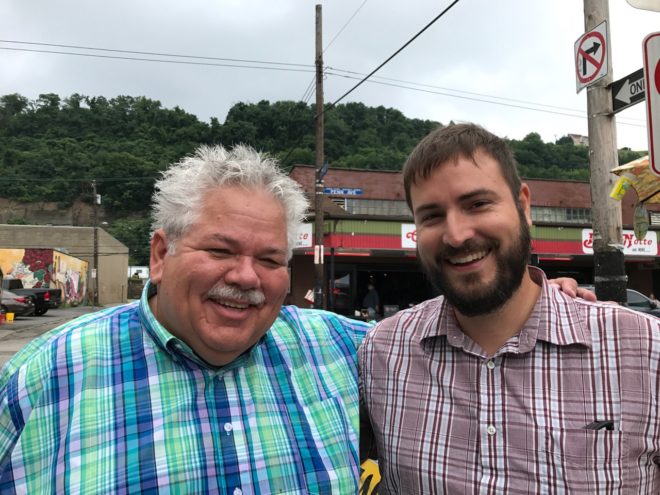 We had the special treat of getting to meet up with Rick Sebak from WQED Pittsburgh. I met Rick back in 2009 when he was filming a documentary called Breakfast Special, which took a look at breakfast across America (watch yours truly in the Columbus clips here). Rick is quite the celebrity around Pittsburgh, having made a lot of shows about the city. I keep up with him online, but it’s always nice to say hi in person. (Also, Rick gave us a great suggestion for breakfast the next morning.) 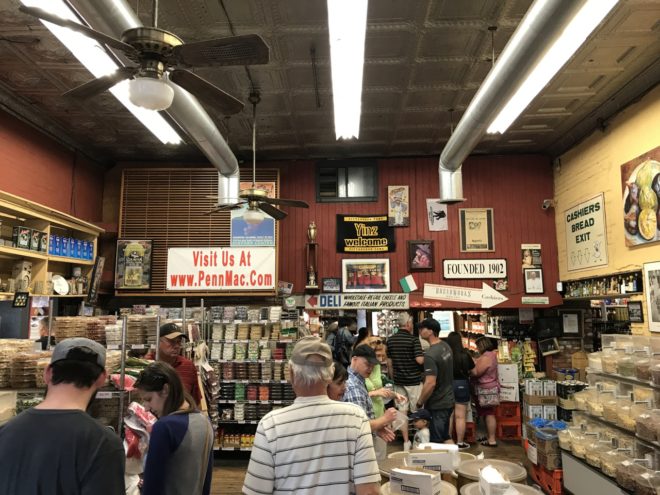 We spent some time collecting more coffee and snacks in the Strip. 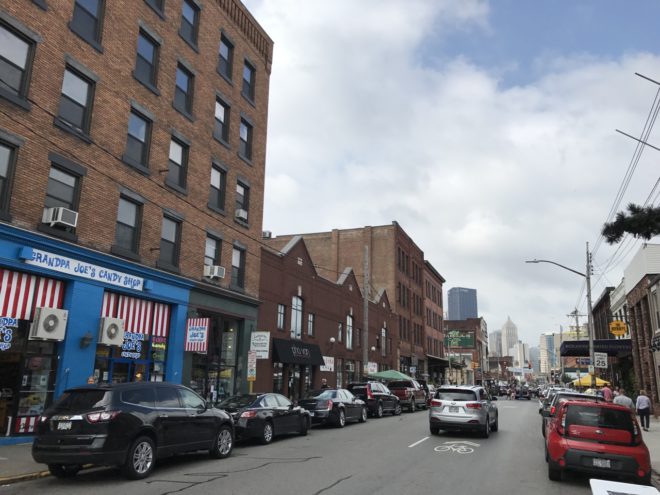 It makes for a fun Saturday morning. After our stroll of the district we headed downtown for brunch at Meat & Potatoes. 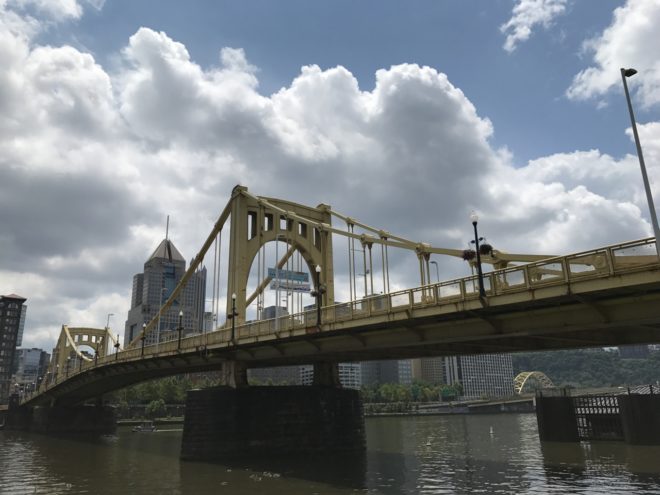 We found a parking garage downtown and parked there for brunch, then walked a block to the river. We paused for a few minutes to wait out a rainstorm that came rolling over the hills and across the river. It was fascinating to see a solid line of rain coming over the bridge. 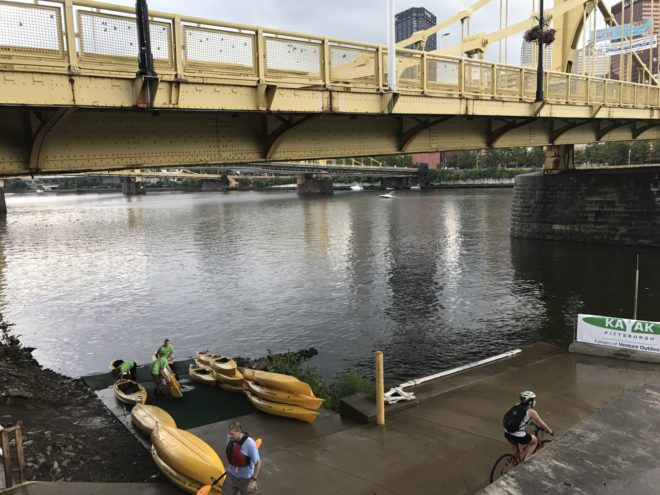 Once the rain passed we crossed over the Roberto Clemente bridge to the Venture Outdoors kayak launch point on the north shore. It’s a public access point, so you can put in your own boats or rent single and double kayaks by the hour. 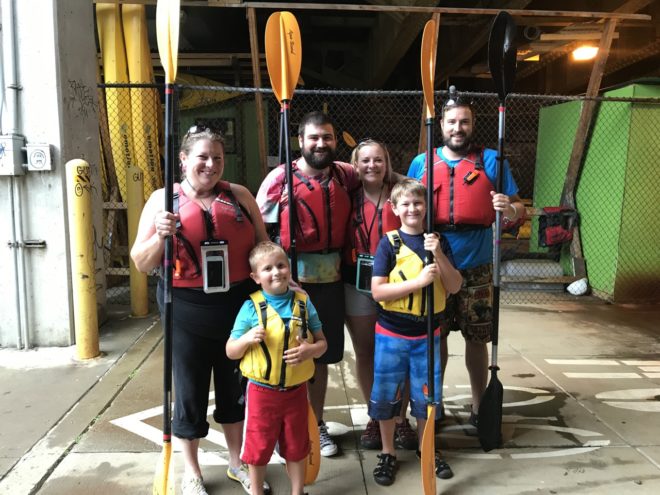 While we had a wait a little bit for the rain to pass, we were soon suited up… 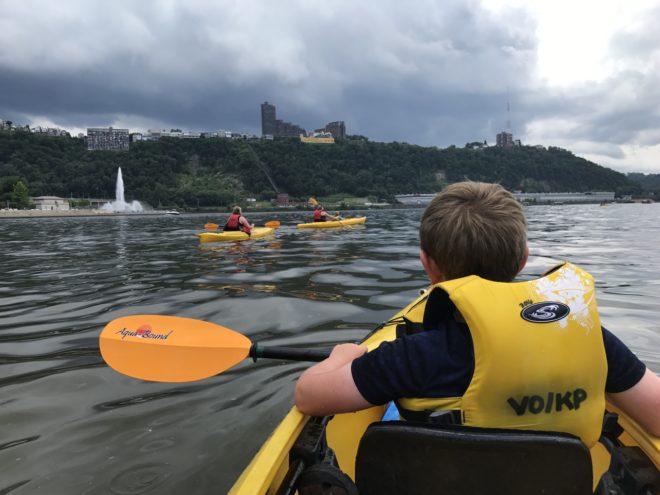 …and out on the water. Beth and I each rowed one of the boys around. 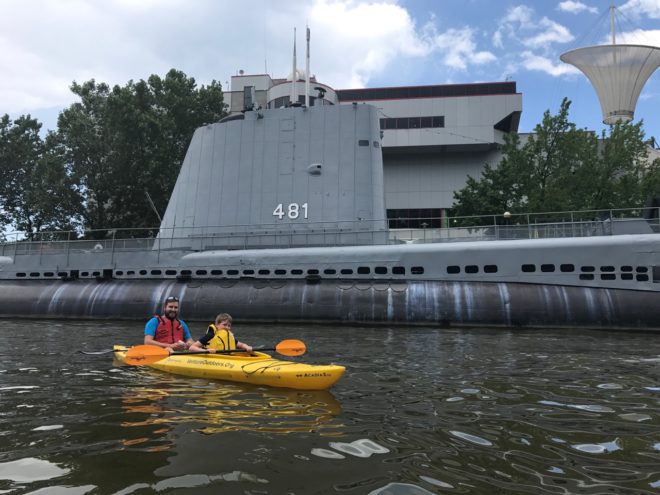 Kayaking is one of those things I really love doing, but I don’t do it enough. I LOVE kayaking as a way to see a city from a new angle. It was a fantastic way to experience Pittsburgh. Our launch point was close enough to the confluence of the three rivers, so we rowed past the football and baseball stadiums, and right up next to the submarine at the Carnegie Science Center. 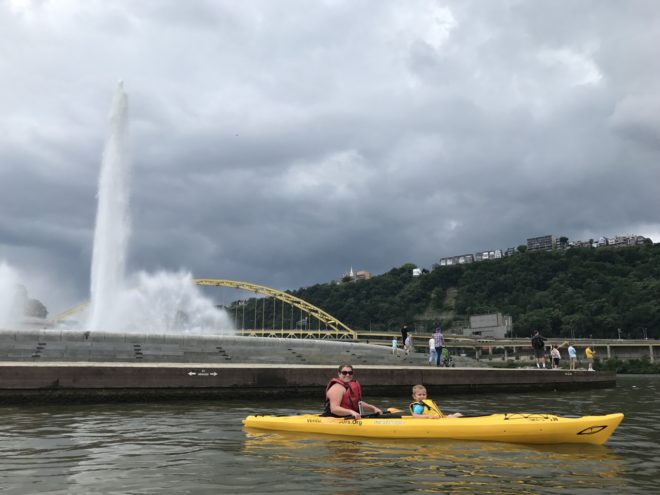 And then across the river to the Point. I can’t wait to do this in Columbus soon, but Pittsburgh is ideal given the bridges, the hills, the buildings, stadiums, and fountains along the riverfront. 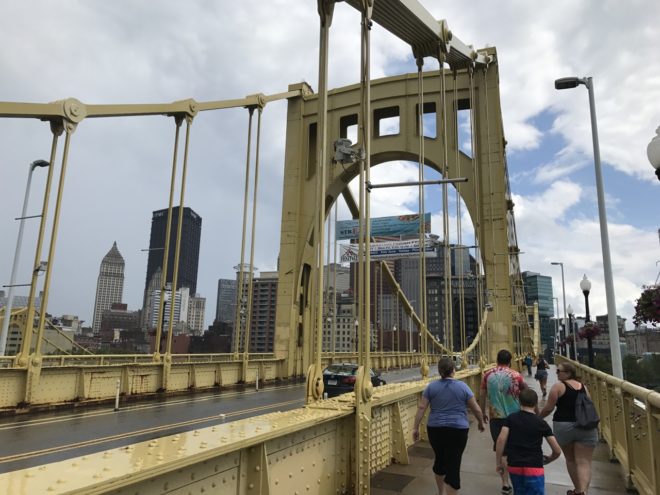 We kayaked for about an hour. We could have gone longer, although with each adult essentially paddling for two, we eventually tired out. Plus, we were chased off the water by a fresh rainstorm. That’s quite the experience, pushing yourself up the river while the rain’s coming down steadily. 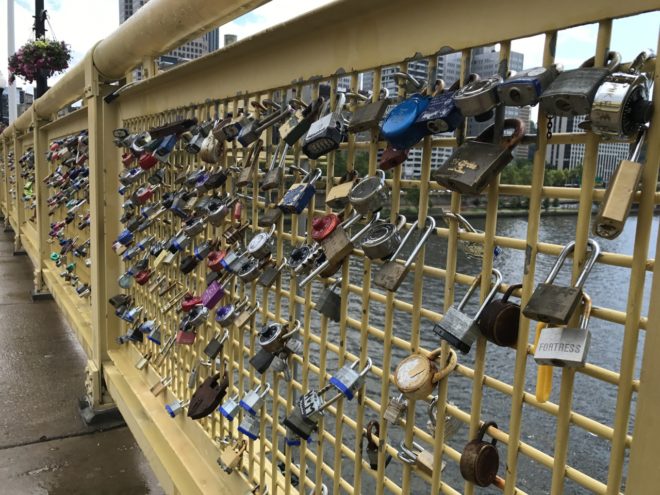 We walked back across the bridge, with its railings covered in locks, and headed on to further adventures. Check out part two here!