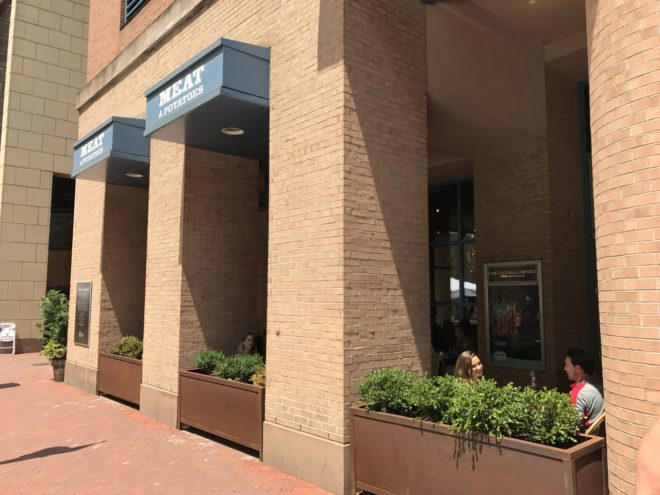 During our Pittsburgh weekend (read all about it here and here), we of course made time for breakfast and brunch. On the Sunday of our visit we dug in at the P&G Diner at the Lincoln Pharmacy, while Saturday morning, after coffee and wandering the Strip District, we headed downtown to Meat & Potatoes. 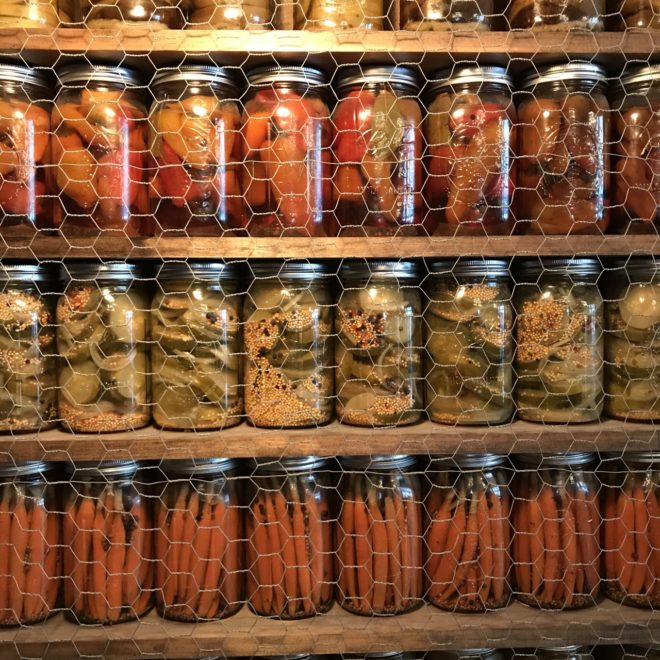 Meat & Potatoes is owned by a larger restaurant group whose other eateries include paired names like Pork & Beans or Butcher & the Rye. Meat & Potatoes obviously plays on their name by tinkering with classic comfort foods. Outside in the waiting area are walls of pickled vegetables in jars behind chicken wire, beginning a play on the sense of homespun meals. 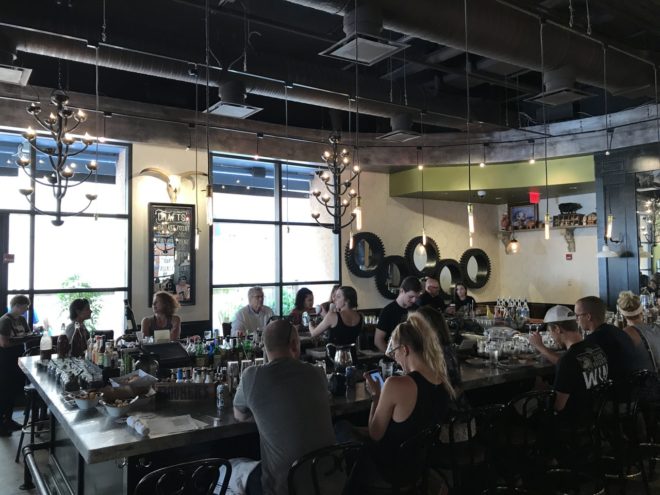 The restaurant is situated in the center of Pittsburgh’s cultural district, across the street from Heinz Hall, next to the Public Theater, etc. The place was busy when we arrived; certainly consider a reservation if you’re planning a visit. 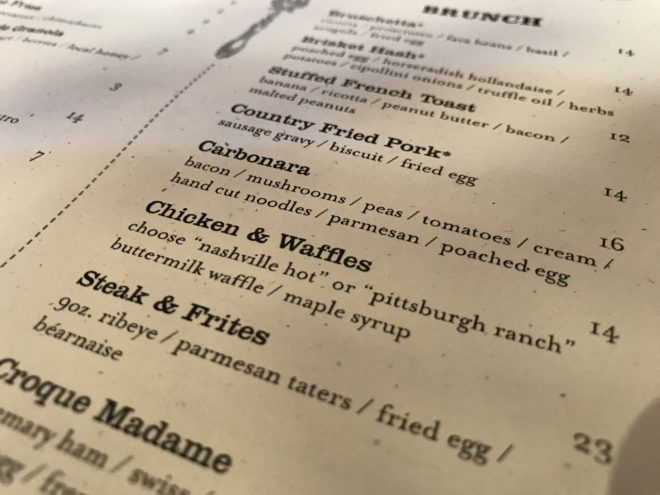 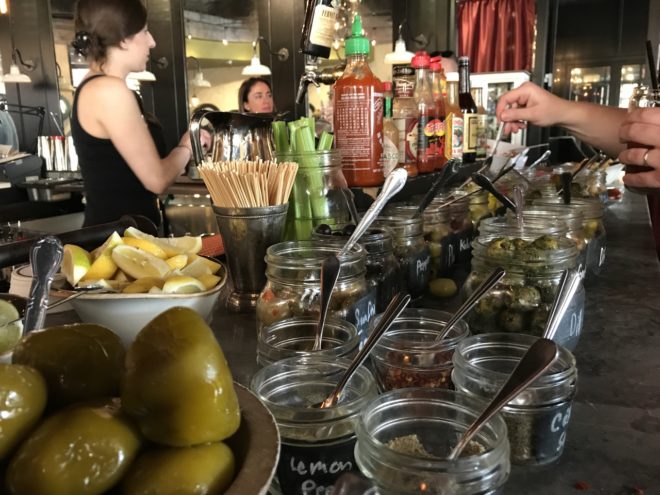 Meat & Potatoes is mainly one large room (plus a patio), with a huge oval bar in the center. Guests are seated around most of the bar; one end is dedicated to the Bloody Mary bar. 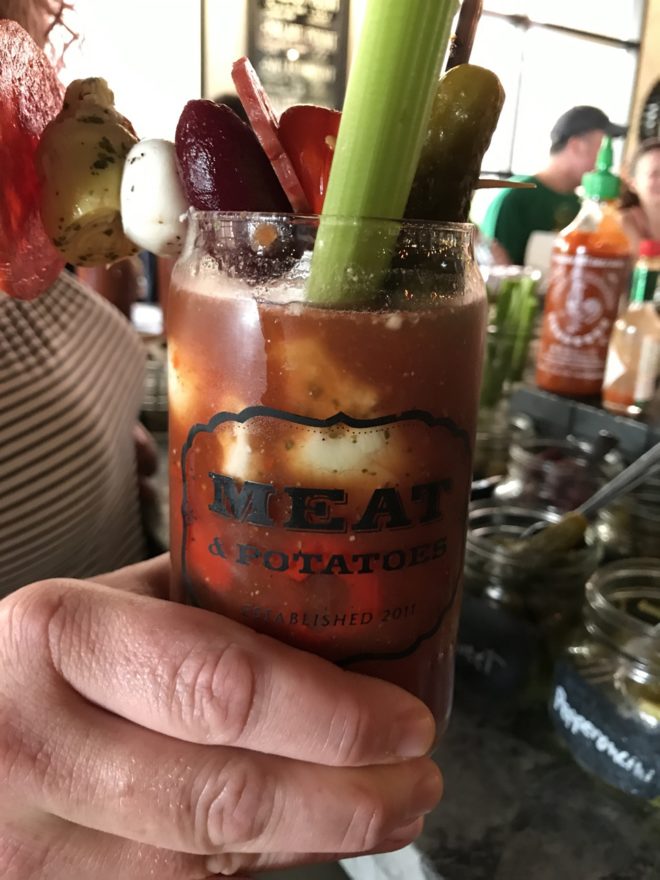 If you choose the option, you can mosey over to the bar to choose from an almost-overwhelming range of options. 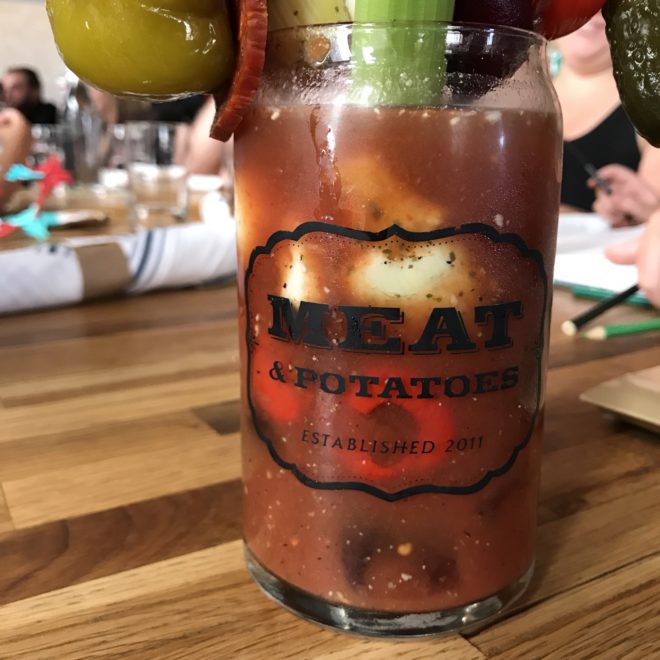 Although I’ve found that seasoned Bloody Mary drinkers know exactly how they like it, so an expansive bar like that is their little playground. 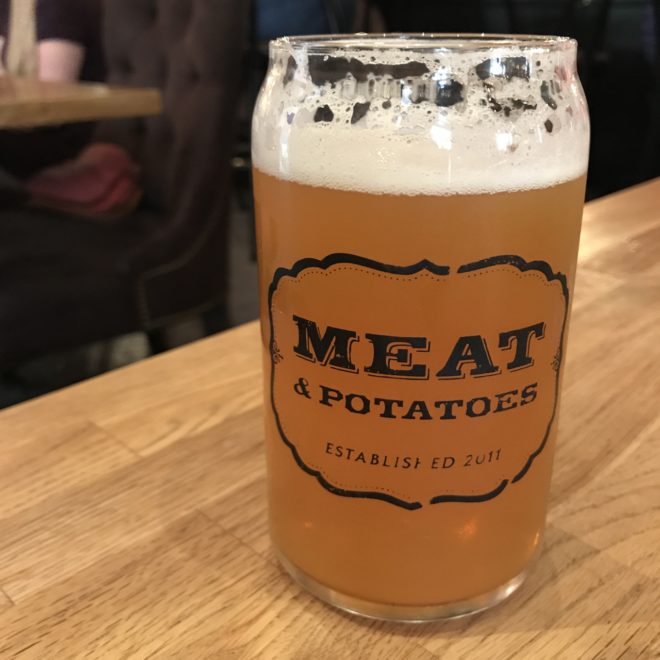 Very good selection of beer on draft and in the bottle. I picked Ballast Point’s Unfiltered Sculpin IPA. 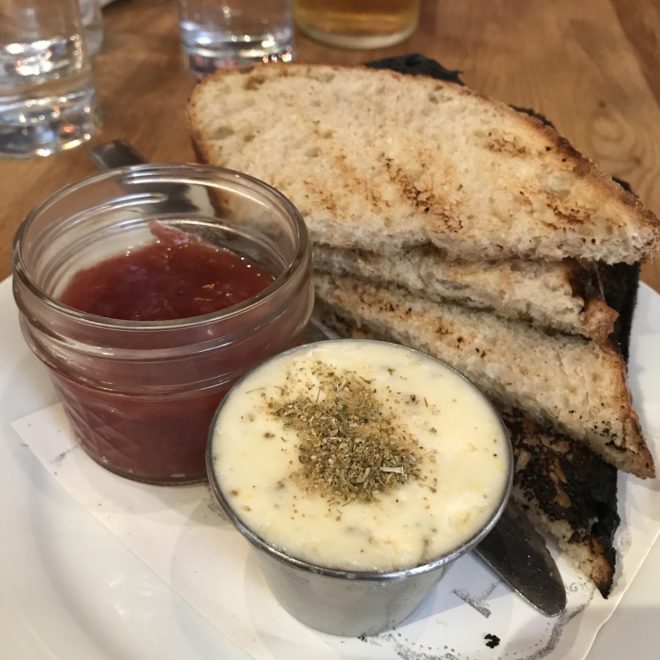 We started with an appetizer of grilled bread – yes, fancy toast – accompanied by a house-made jam and a rich duck lardo. 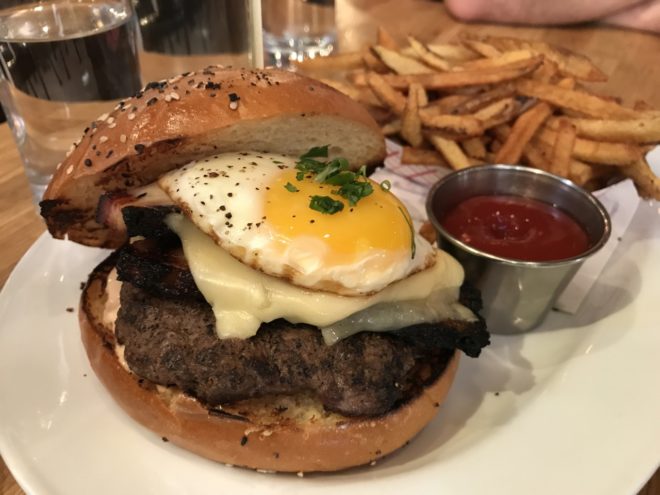 The pub burger is topped with pork belly cured with pastrami spices, a horseradish cheddar, and the requisite fried egg. (Just add an egg and it counts as brunch, right? Yes, yes it does.) 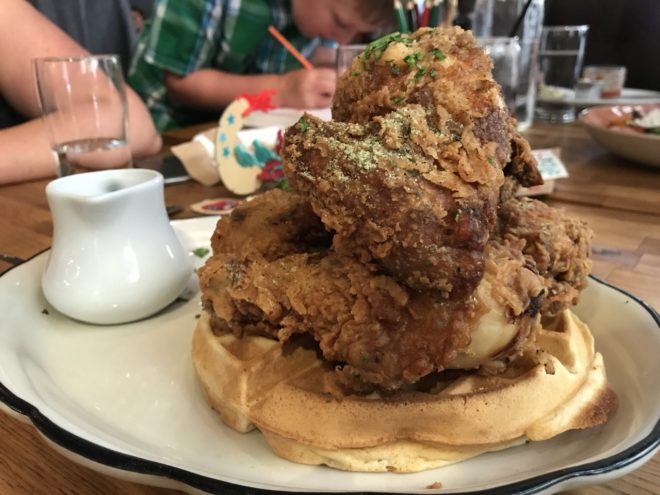 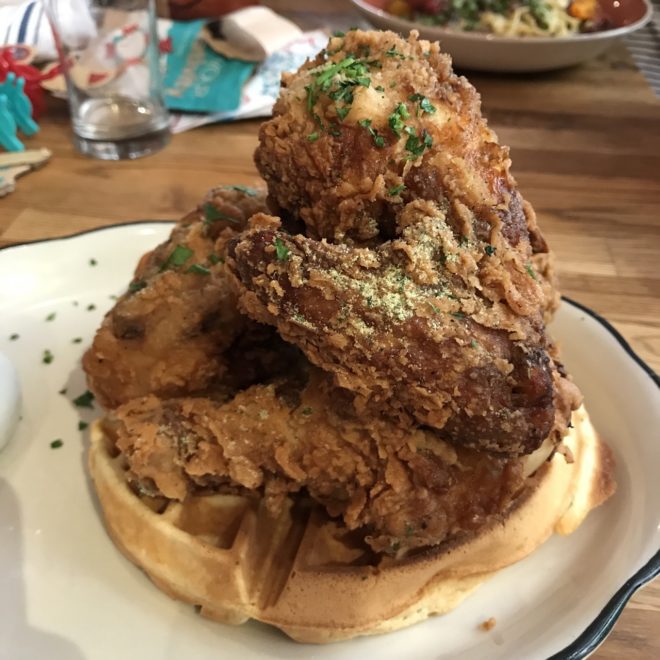 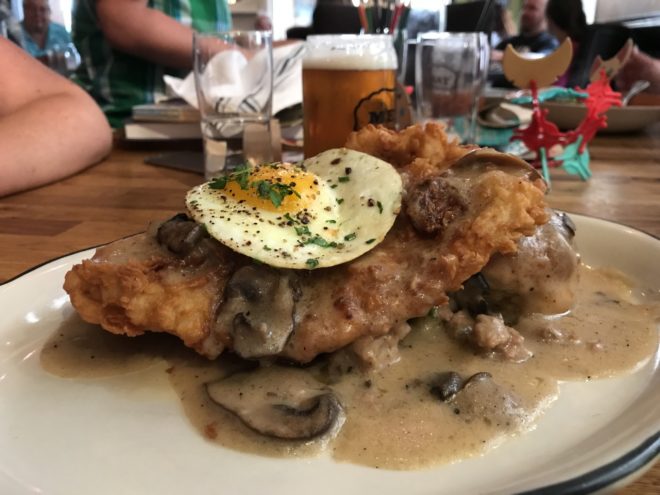 The country fried pork comes in a similarly large portion. Breaded and fried, accompanied by a biscuit, topped with a thin but rich gravy and a fried egg. 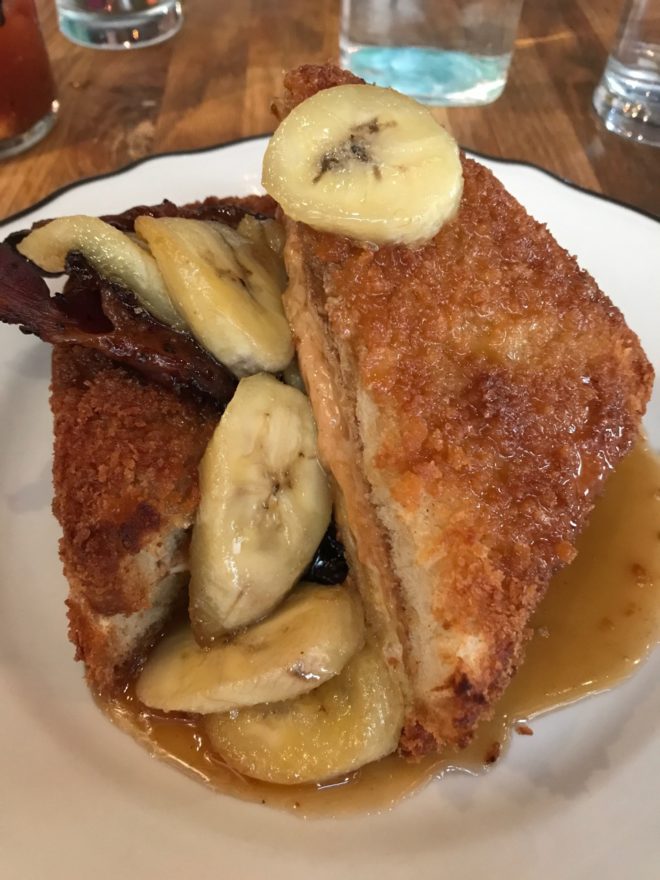 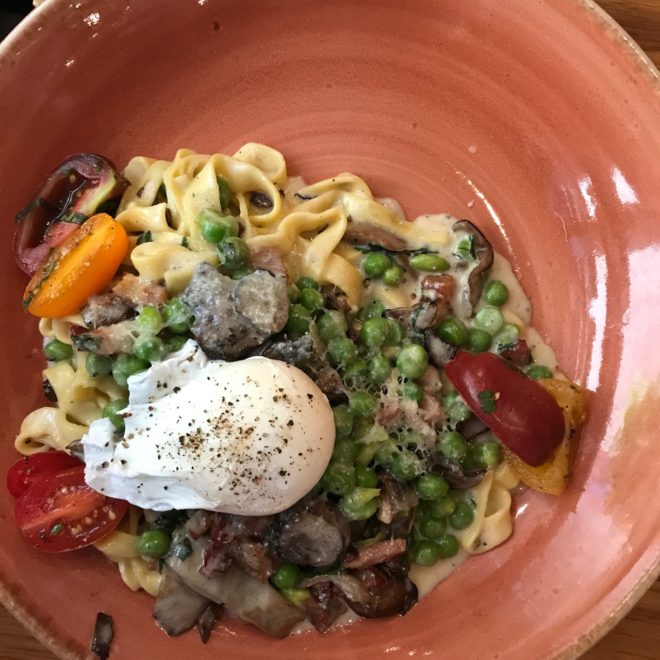 The breakfast carbonara features noodles topped with bacon, mushrooms, peas, tomatoes, parmesan, and a poached egg in a cream sauce. 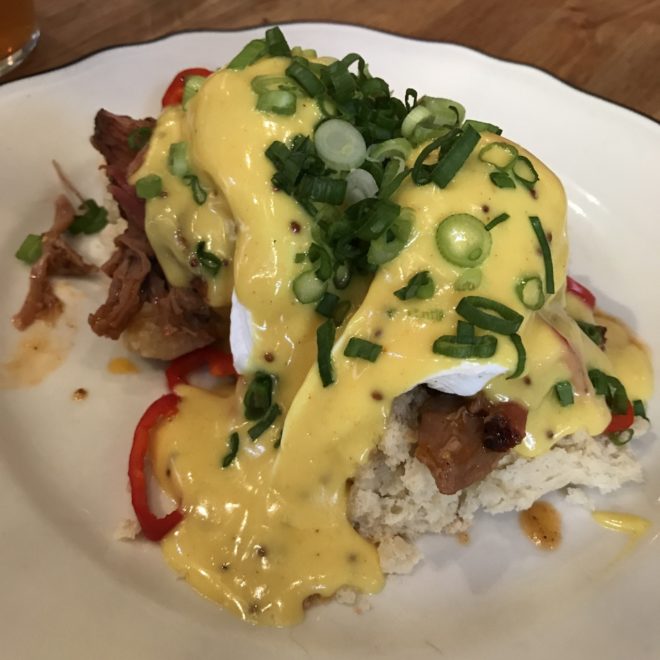 And no brunch is complete without a benedict, right? Their benedict of the day was a Cuban style layered pulled pork with peppers and poached eggs on a biscuit, covered in a tangy mustard hollandaise.

Lots of fun to be had at Meat & Potatoes’ brunch! The atmosphere is lively (seriously, make a reservation), there was a DJ spinning records in the corner, there were a few families with kids, and the food is creative and filling.