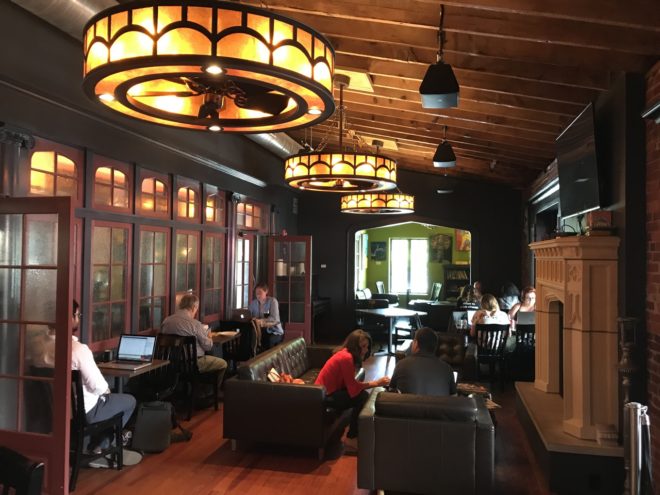 So far in the course of our Pittsburgh weekend, we’ve had noodles and dumplings at Everyday Noodles, desserts and coffee in Lawrenceville, visited the Strip District, had brunch at Meat & Potatoes, and kayaked on the rivers. Read all about part one right here! After our kayaking adventures we headed back to the apartment to dry off and clean up, then set out to explore the Lawrenceville neighborhood.

We made a quick stop into The Abbey on Butler Street, a converted bank building that houses a coffee shop, bar, and pub. It’s a hip spot with detailed historic decorations, including an old church rose window converted into a chandelier hanging above the coffee shop. 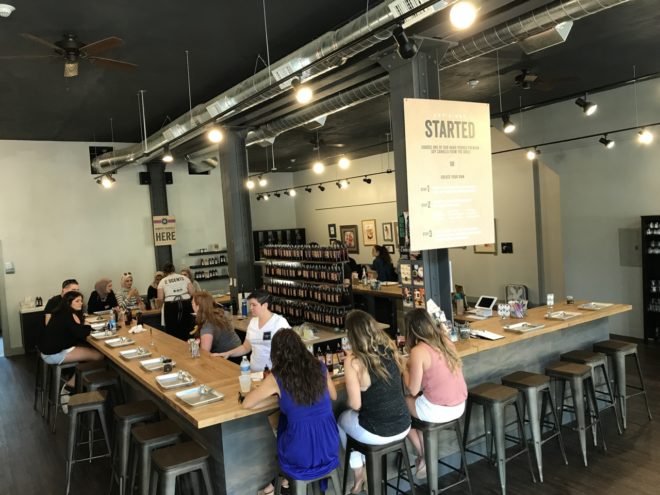 And then it was on to the main attraction: the Candle Lab! We’re proud of sister/sister-in-law Abbey on opening the Pittsburgh outpost of the Columbus candle company. Lawrenceville is the perfect neighborhood for the store, and the space includes a large bar in the middle, candles on the walls, and a small event space in the back. 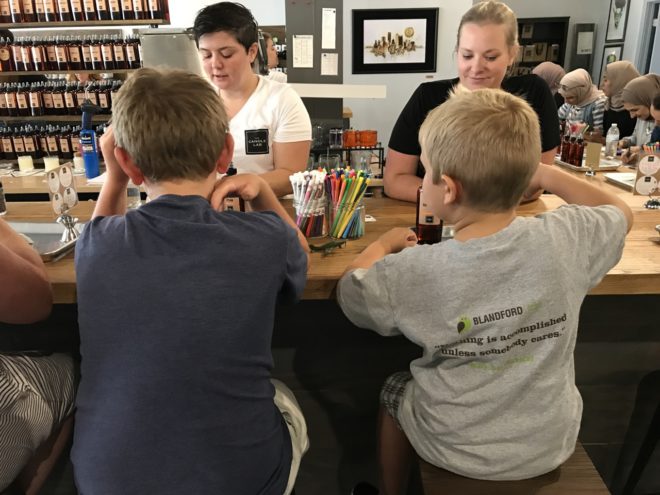 The Candle Lab offers over 120 fragrances of candles and lets you customize your own. You go around smelling candles and choosing scents, designing your own label, and then helping mix it. Aunt Abbey generously let the boys make their own. 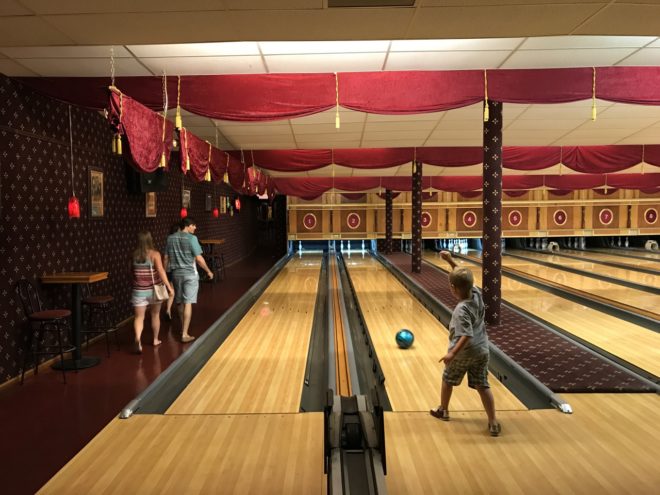 Afterwards we explored more of Lawrenceville, poking our heads into a variety of shops, then hanging out at Arsenal Bowling Lanes, an upstairs bowling alley, bar, and restaurant. We caught them just as they opened in the late afternoon, so we were the first customers in the door. The space is nicely decorated, and has a wonderful old school vibe. One section is 21+ only, but other lanes are open for anyone, and there are a variety of all-you-can-bowl deals. We ordered a couple drinks, some snacks from the restaurant, and then bowled a frame. (Word of advice: lane rental and shoe counter are cash only.) 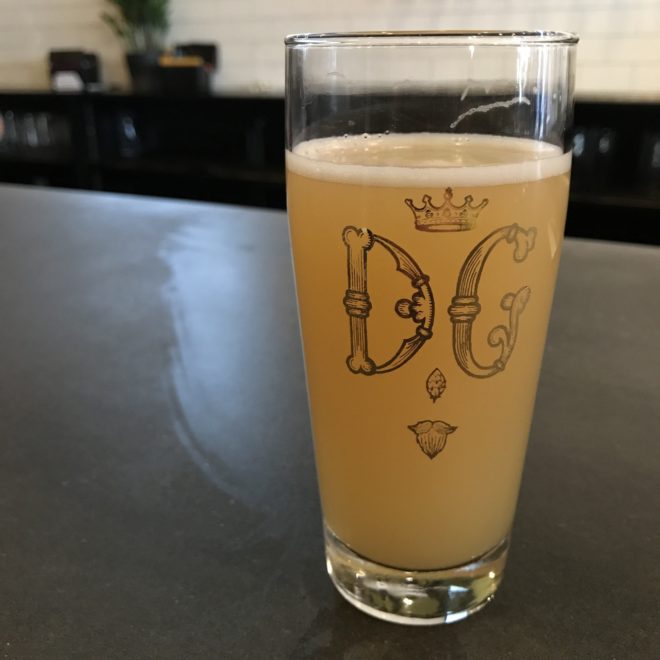 That evening the adults got to hit the town, as it were. We visited two breweries that night, starting with Dancing Gnome in Sharpsburg. Dancing Gnome is a hip, subway-tiled spot with a food truck out front; they focus on pale ales, IPAs, farmhouse ales, and the like, all of which pour pretty hazy. 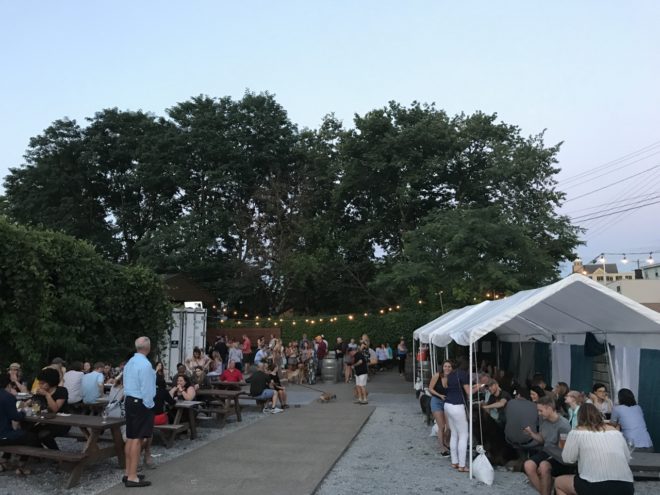 After a drink at Dancing Gnome we headed to Millvale to Grist House Craft Brewery, a hopping side street spot that features enormous patio space. The brewery and taproom itself are located down the end of the patio. There’s only one place to order beer, which means it gets a little crowded, but with beers in hand you can find seating amongst the tents and picnic tables. There were a lot of people with dogs there, so there may have been an event going on. A small crew was serving pizzas out of a pizza oven. We enjoyed the Fire on the Hill IPA and Camp Slap Red amber ale. 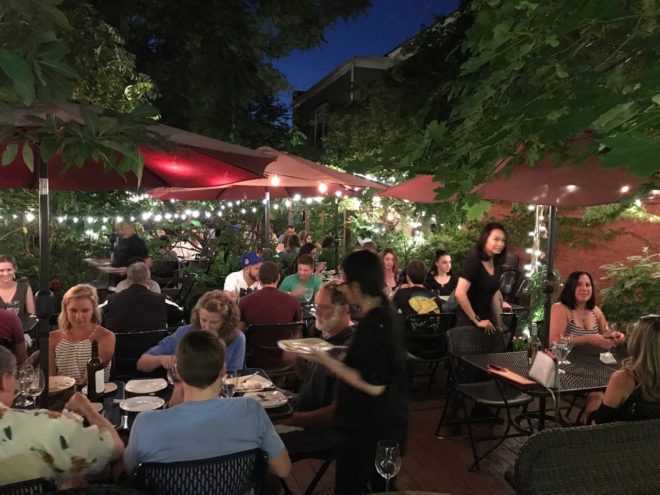 After a couple beers we were hungry, and we headed back to Lawrenceville to an absolutely adorable Thai spot called Pusadee’s Garden. The restaurant features a large and lush garden patio, lit with strings of lights and almost completely hidden from the street. 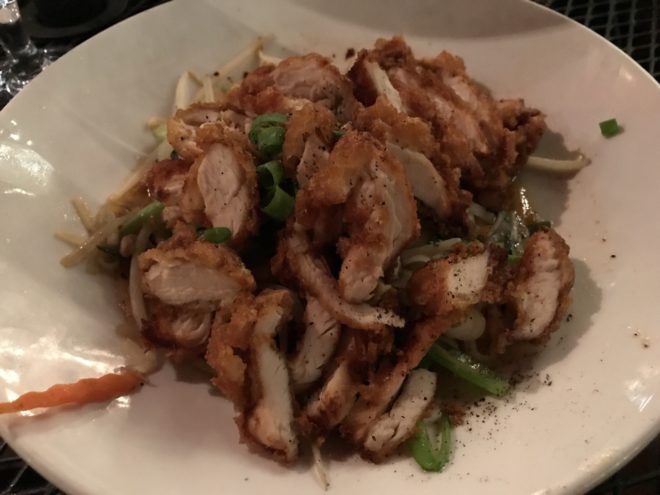 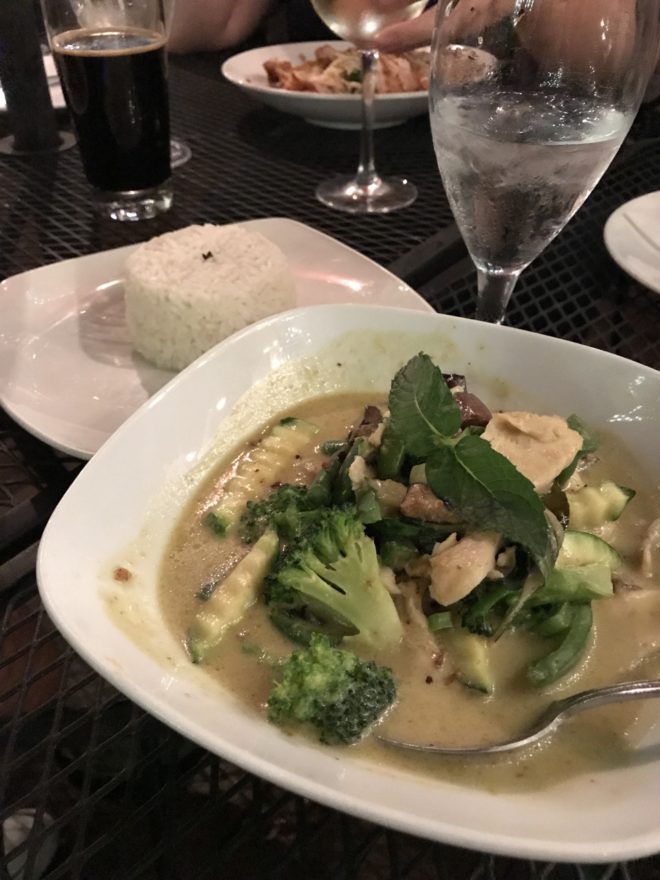 …and green curries, and more. 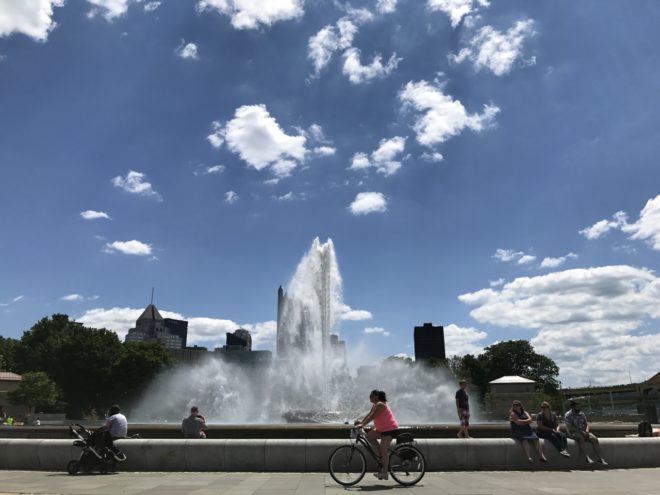 The next morning – our last – we went back to Millvale for breakfast at the P&G Diner at the Lincoln Pharmacy, on the suggestion of Rick Sebak. Afterwards we headed down to The Point, where the Allegheny and Monongahela rivers merge to form the Ohio River. 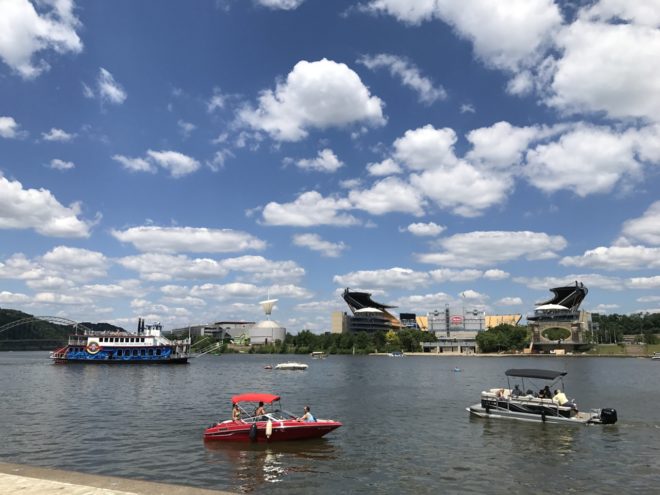 It was a perfectly beautiful morning, so there were people biking and lounging around the fountain, and plenty of boats large and small out on the rivers.

Click the panorama to get a good look at the Point! 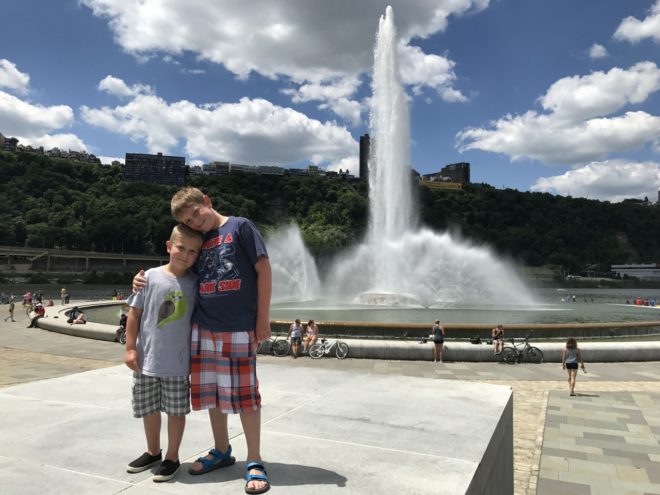 And, look! The boys paused long enough to get a nice photo together. 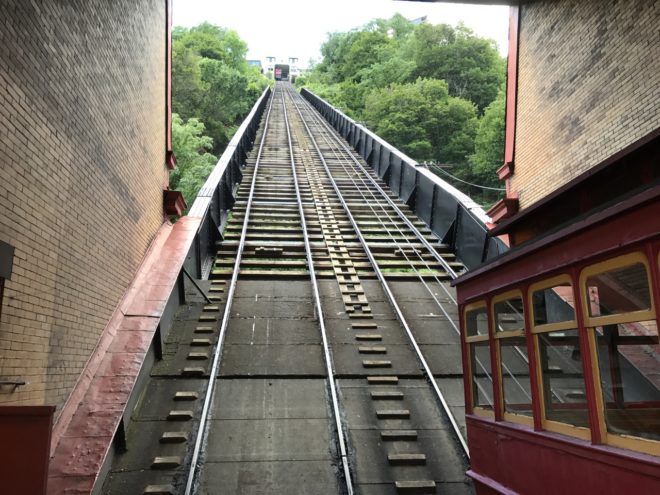 Our last stop heading out of town was the Dusquesne Incline, a small cable car that runs up tracks on the side of Mount Washington. You can ride the incline starting at the top or the bottom; we started at the bottom. There’s a handy parking lot next to the station. Word to the wise, though: the incline is cash only. 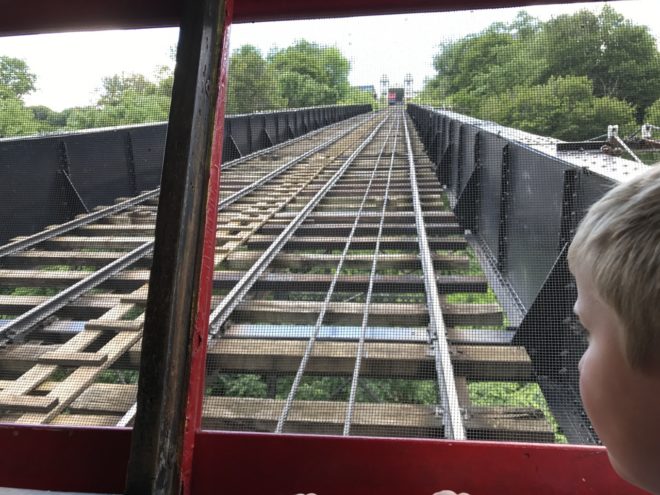 The ride feels perfectly safe, although the rickety wooden carriages don’t seem to have changed much over the years. The slow crawl up to the top only takes a few minutes. 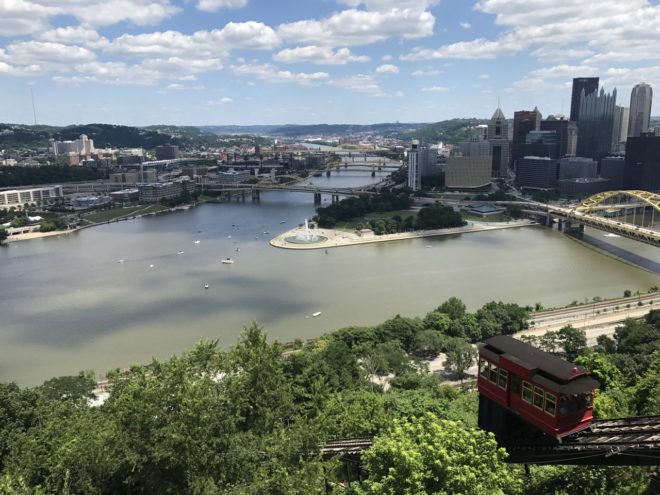 And once you’re there, you have one of the best views of the city. There’s a small museum and gift shop up top, complete with displays about how the cars work (you can even see the gears working through a glass window) and with photos from Pittsburgh history. Some of the more remarkable photos showed massive amounts of flooding from nearly a century ago – the floods rose high enough to float barges and train cars into the city.

Click on the panorama to get a sense of the view. It helps that we had a gorgeous day! 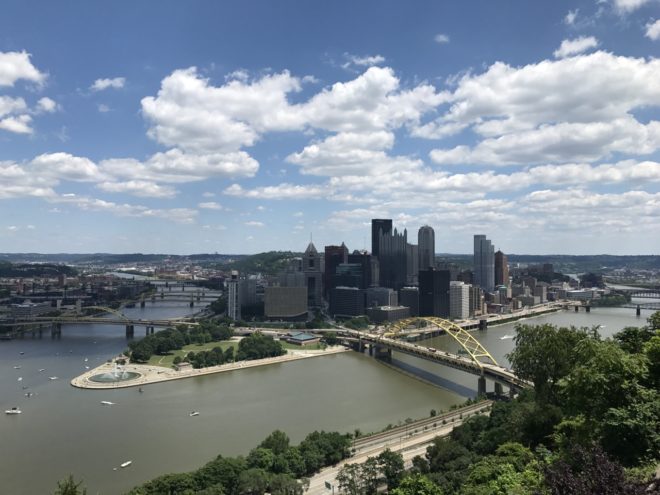 In all, a very fitting end to the weekend. Until next time, Pittsburgh!

If you haven’t already, read part one of our Pittsburgh weekend.