Back to Butler County – Part 3 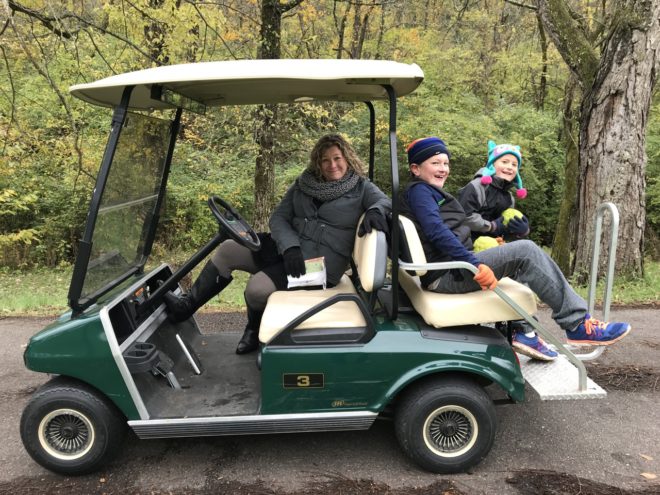 If you’ve kept track of our recent Butler County adventures, you’ll know that so far we’ve done dinner, donuts, laser tag, breakfast, coffee, and more. Catch up by reading part one and part two. After hot chocolate and cappuccinos at True West Coffee in Hamilton, we snuck across the Great Miami River to Pyramid Hill Sculpture Park, where we boarded an art cart to trek the hills. 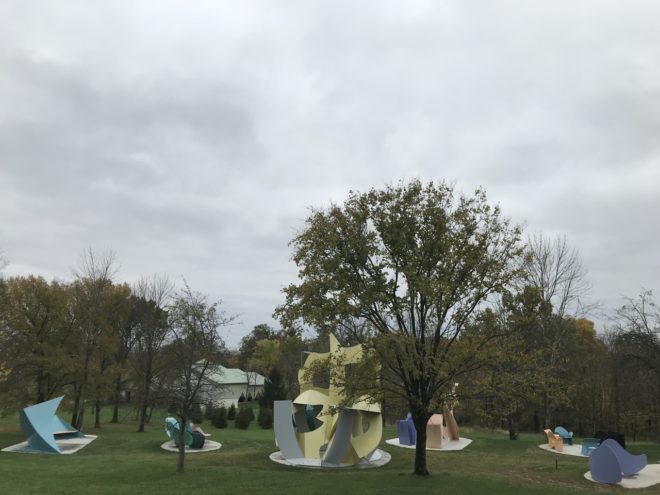 Pyramid Hill was a highlight of our last visit in March (see here), so we were especially excited to return, even if it was a little blustery. 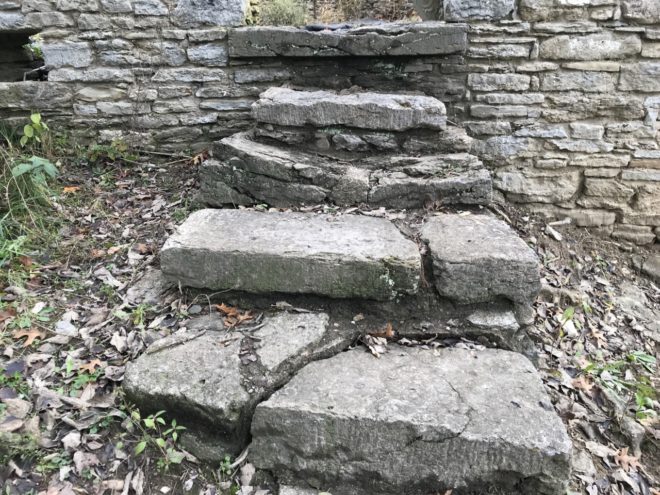 Pyramid Hill is situated on more than 300 acres, and features over 60 sculptures placed throughout the landscape. You can rent an art cart (aka a golf cart) at the visitor’s center, then roll up and down the hills to see the artwork and the museum in the center of the park. There are creeks and ponds and hiking trails, too, plus an old stone house – the original structure on the property. 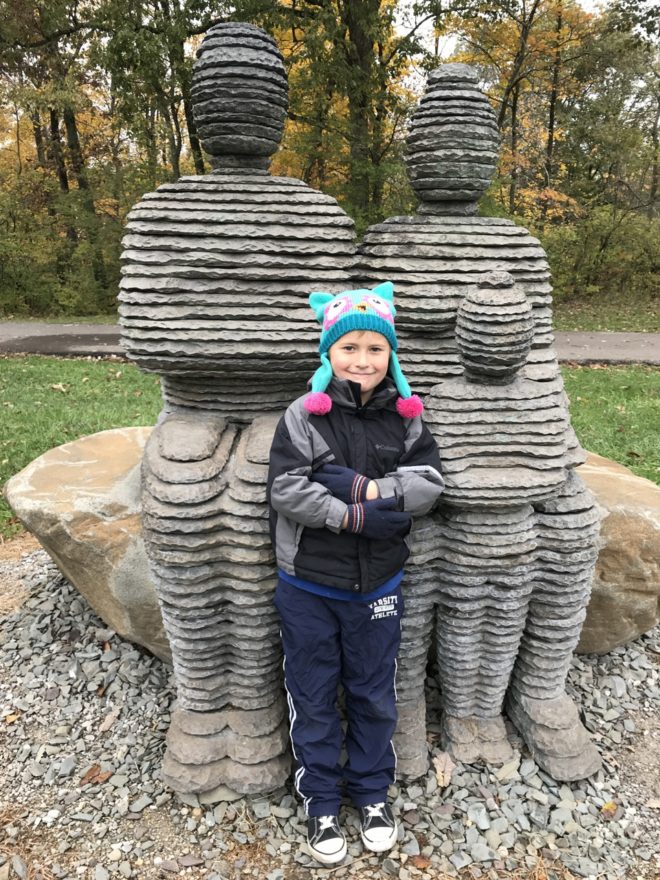 Although you’re not supposed to climb on the sculptures, you can still get out and interact with many of them. 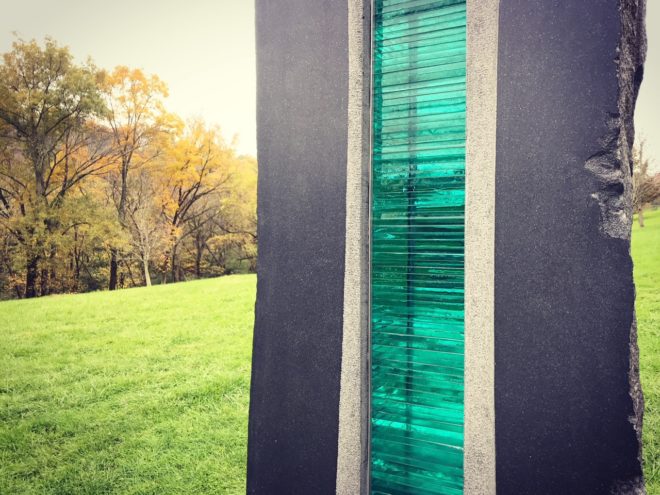 There’s a great variety of artwork: metal, wood, glass, some more abstract, some more realistic. It’s especially beautiful in the fall. Even though we’ve been twice now, we’re still excited to return in warmer weather to hike the trails. 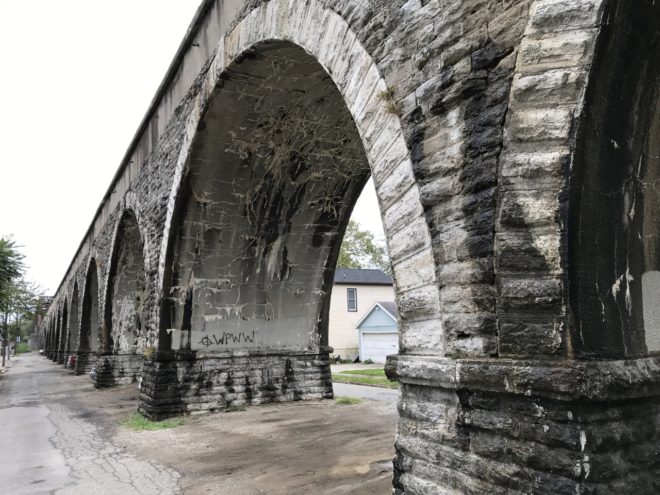 From the sculpture park we meandered back through Hamilton… 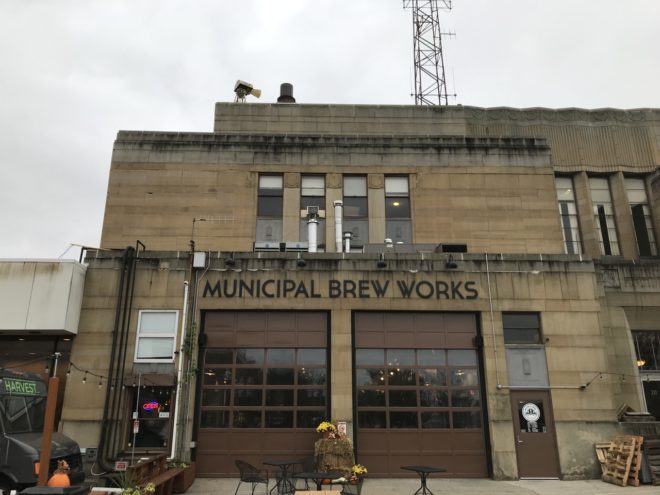 …to Municipal Brew Works, established in the old Hamilton municipal building next to the river, across the street from the Butler County courthouse. The building is remarkable, and it’s great to see it being used in new ways. 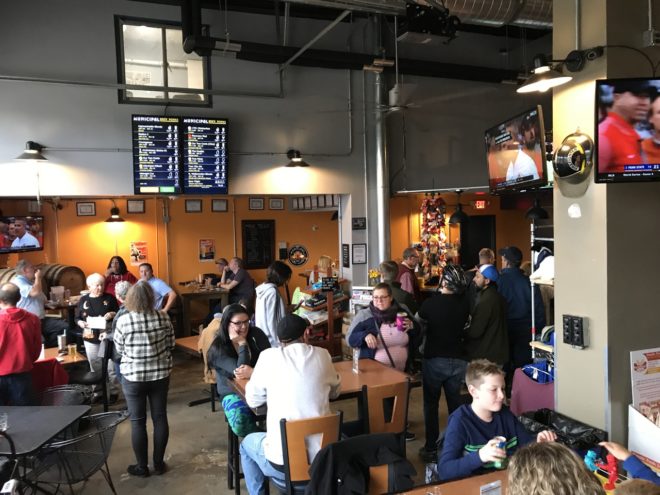 There’s ample patio space out front, as well as room for food trucks, and a taproom with a bar, maybe a dozen tables, TVs, screens with the current beer list, and paraphernalia related to the building. The Ohio State game was playing that day, and the taproom was packed. 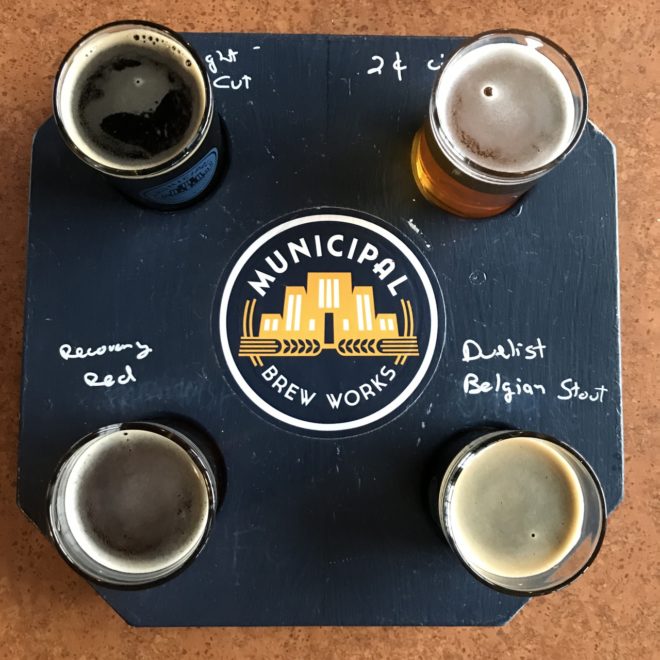 They shared samples of their brews, which included their pale ale, Belgian stout, imperial red ale, IPAs, a coffee porter made with True West Coffee, and more. All excellent – and all the type of beers you’d like to sit and sip while hanging with friends, playing games, or watching sportsball on the television. 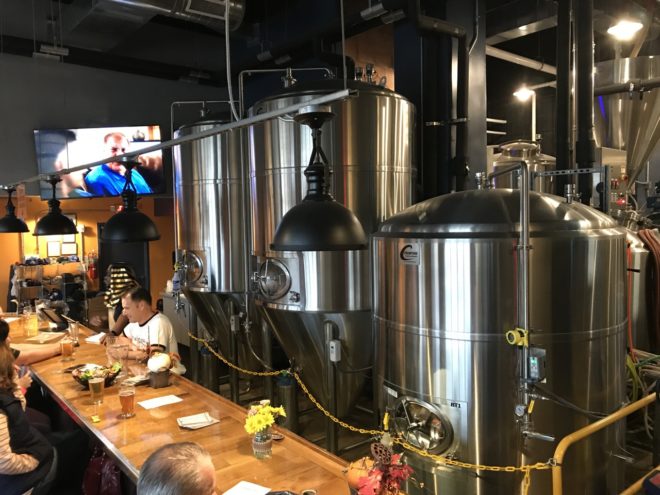 Right behind the bar sits the brewery itself. They’re crammed into that space, and like many microbreweries, are making plans for expansion. 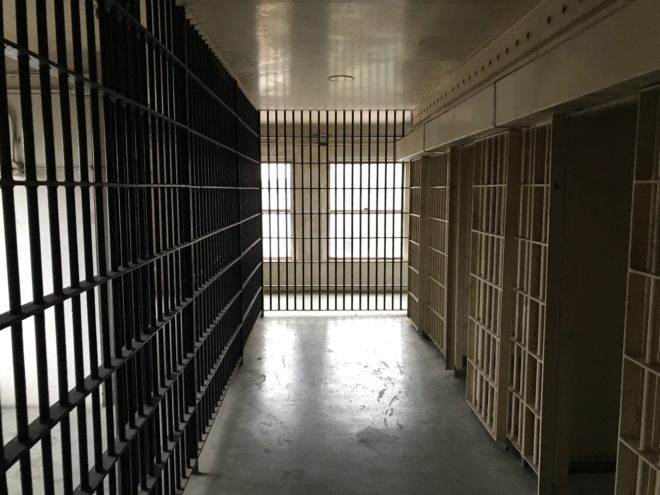 Jim Goodman, one of the owners, took me on a little tour of the building. Where the brewery sits used to be the engine house for the Hamilton fire department and the offices for the police detectives. Jim has a number of photos of little details they discovered during renovations, like a signed list of the detectives’ names written on the wall of their offices. He also showed me the old city council chambers, some rooms being used by a business incubator, and some current displays from the local historical society. We even took a rickety old elevator up to the top floor to see the old jail cells. 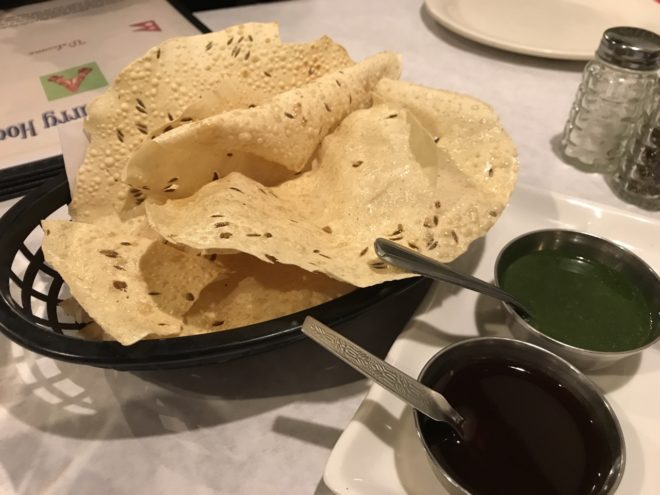 After some beers and board games in the taproom, we headed out to our final destination: dinner at Namaste Curry House in Fairfield. They specialize in Indian and Nepali dishes. We started with a basket of pappadum, cracker-thin lentil cakes with dipping sauces. These brought back memories of the Indian restaurants we used to visit in London. 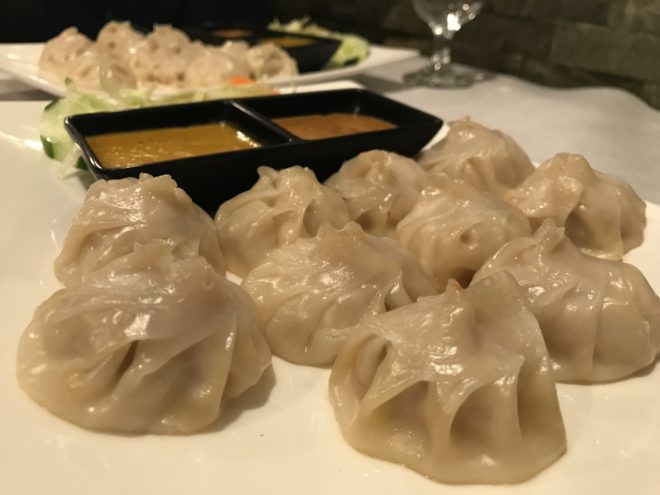 Our boys will devour every dumpling in sight, so we ordered two plates of chicken momos (Nepali dumplings). 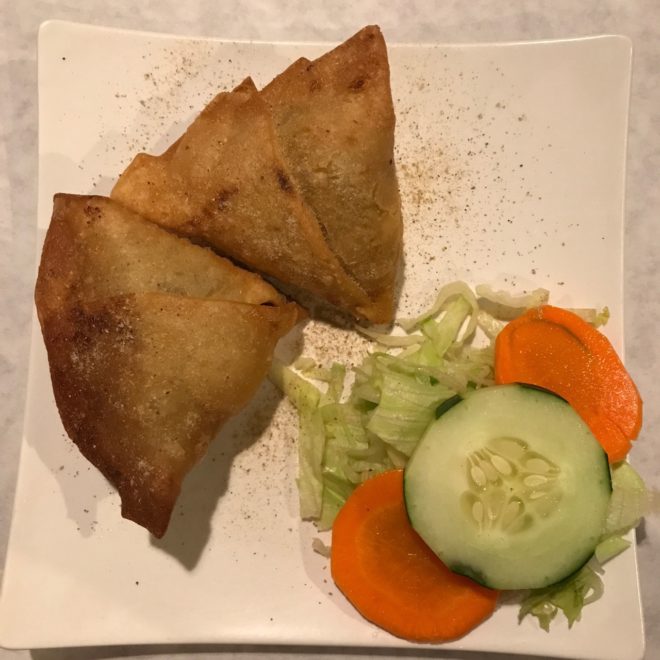 Beth and I split the vegetable samosas, richly seasoned – some of the best we’ve had. 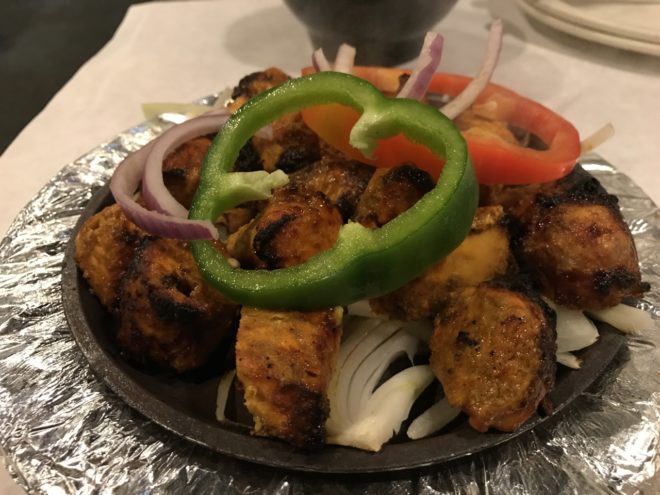 There was grilled chicken served sizzling in a skillet… 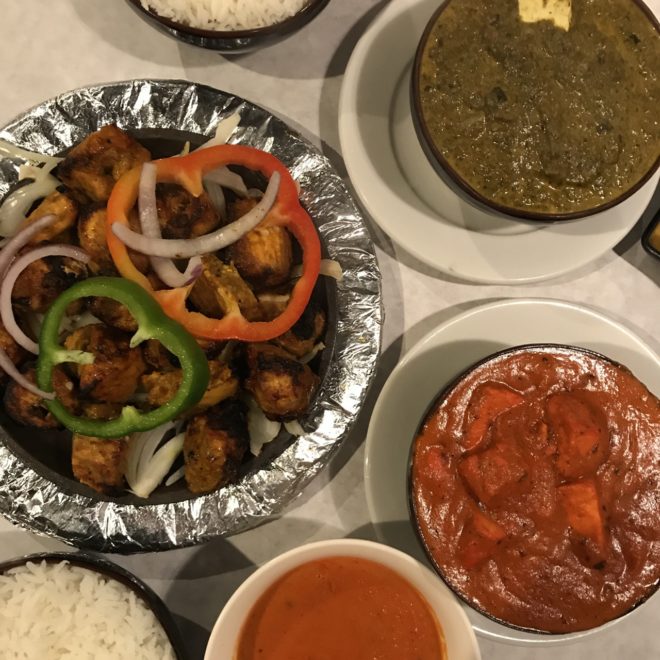 …and a couple different curries. In all, it was a warm and fitting end to our overnight stay in Butler County. As with our past trip, we’re excited to return!

If you haven’t already, read part one and part two of our trip, as well as breakfast at the old school Kostas Restaurant in Hamilton.

Disclaimer: Pyramid Hill passes, meals, and overnight accommodations were provided by the Butler County Visitors Bureau. Beers were comped by Municipal Brew Works. Photos and opinions are our own.