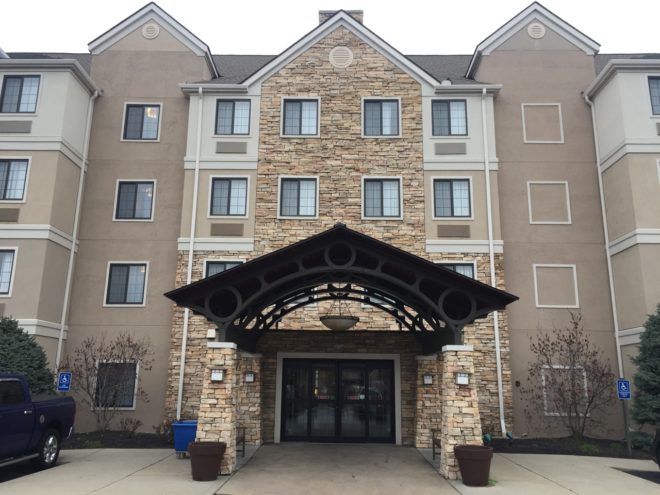 In between bites of donuts on the Butler County Donut Trail, we found time to explore the region and some of its attractions and restaurants. The Butler County Visitors Bureau was kind enough to put us up at the Staybridge Suites in West Chester, and that served as our home base for exploring. 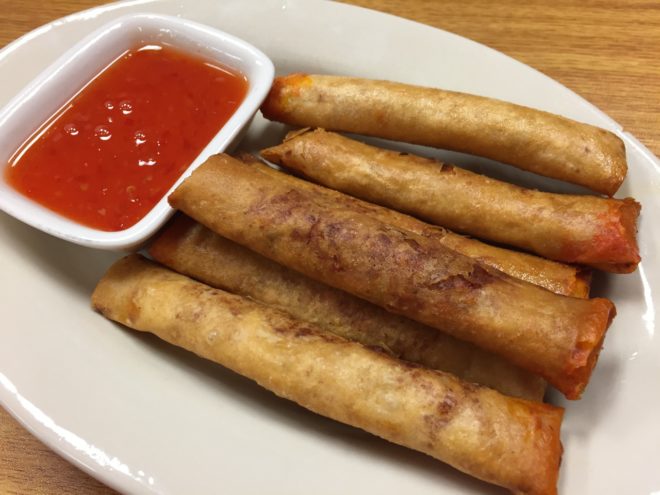 In order to maximize our time on the Donut Trail, we arrived Friday night for dinner. Our hosts suggested Dai Trang Bistro, an Asian eatery specializing in Filipino and Vietnamese fare. It was located in a nondescript strip mall in West Chester, which is usually a good sign you’ve found something special. The huge menu took some navigating (get a look at it here), but our server helped narrow our focus. We started with lumpia, crispy Filipino egg rolls filled with chicken and served with a sweet and tangy dipping sauce. 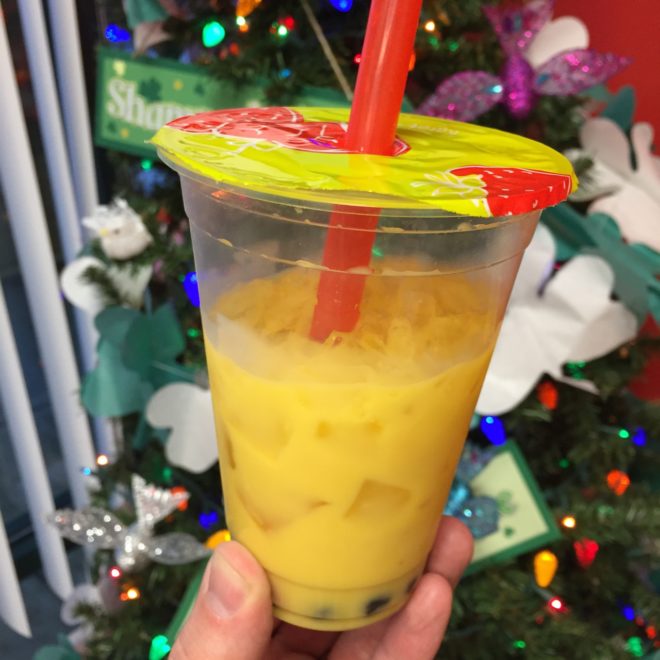 Plus a sweet taste of mango bubble tea. 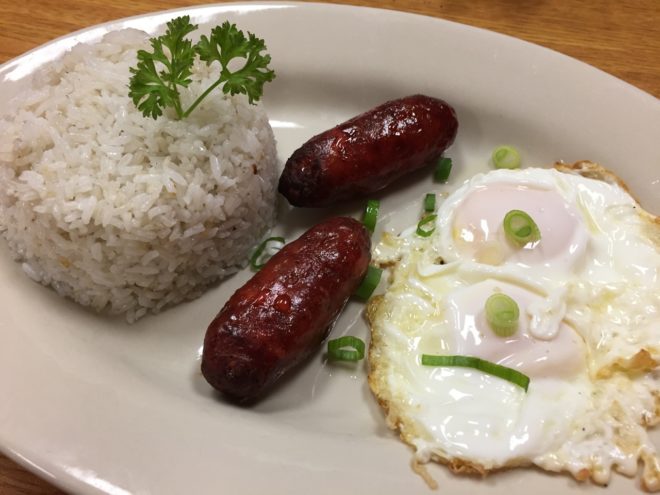 We recognized some dishes from dining at Red Velvet Cafe and Bonifacio in Columbus, like the silog with garlic rice, fried rice, and a pork sausage called longanisa. 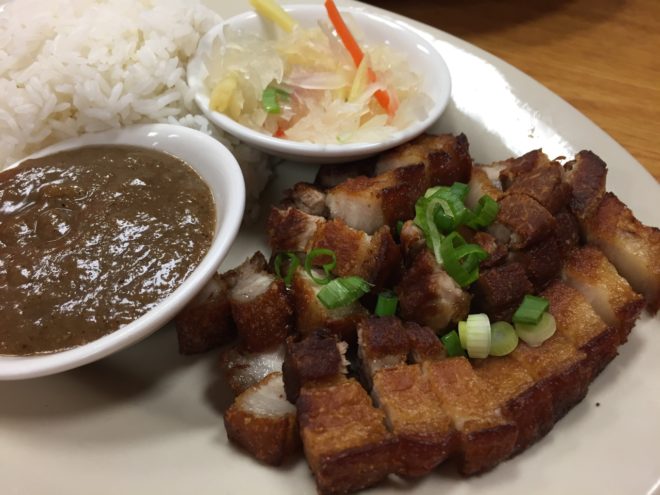 Our server recommended the lechon kawali, a dish of crispy pork belly diced and served with rice, a surprisingly sweet sauce called mang tomas, and atchara, or pickled papaya. The pork belly was fried crisp, and it worked well dipped in the sauce. 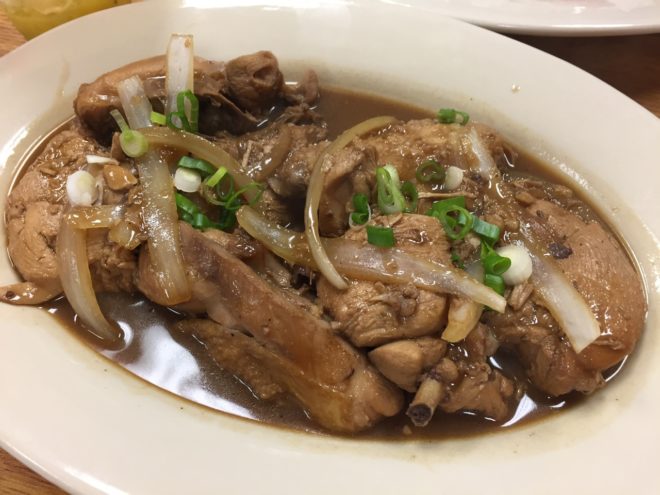 The chicken adobo proved to be another hit. The bone-in chicken is simmered for a long time in a savory sauce. It just pulled apart, and was wonderfully tender. 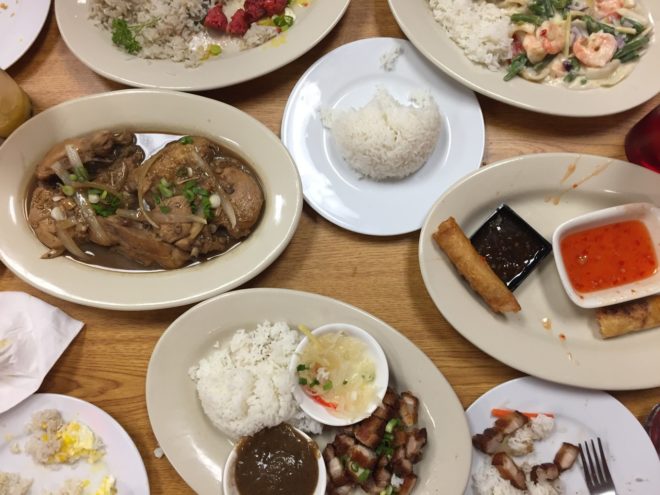 We ordered a bunch of dishes and split them all. In the upper right corner is one of our favorites, also recommended by our server: the ginataang sitaw at kalabasa, a dish of shrimp, string beans, and squash cooked in coconut milk. It was rich, creamy, and packed a surprisingly strong heat. 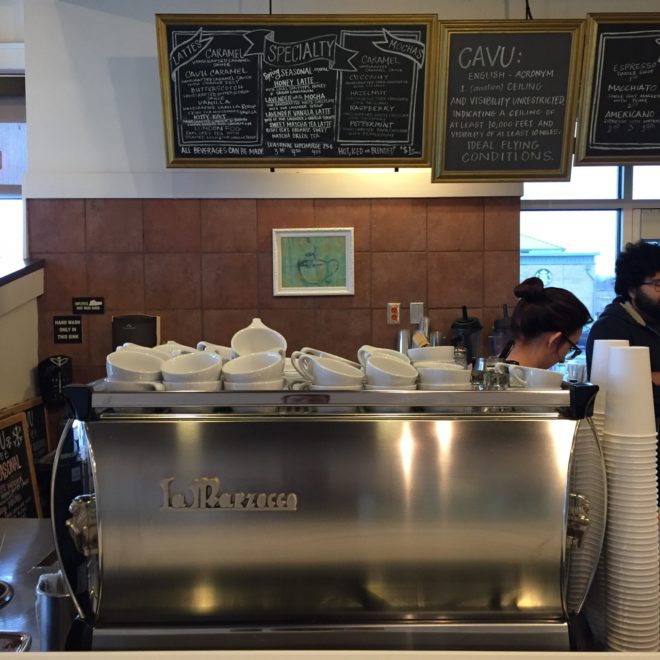 The next morning I awoke early to visit our first two donut shops – Milton’s in Middletown and Martin’s in Trenton – then trekked back to the hotel to pick up the fam and visit Stan the Donut Man in West Chester. We had scoped out some coffee spots and found Cavu Coffee nearby. 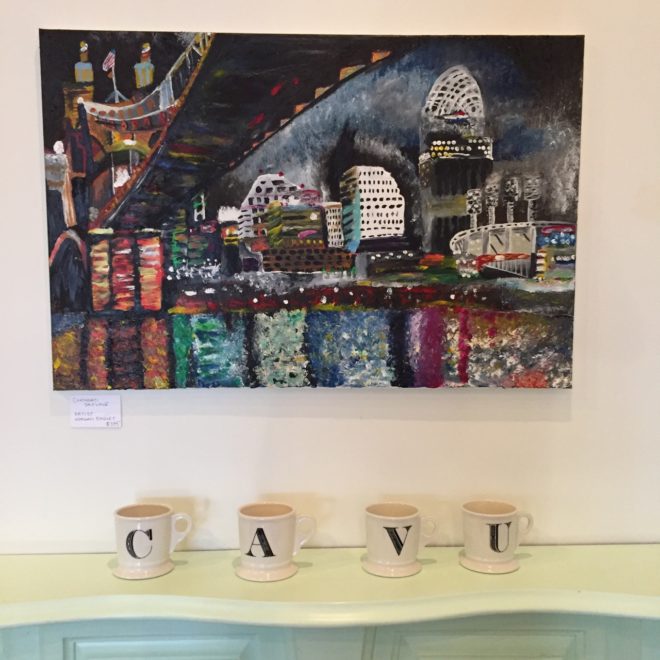 It proved to be a great spot for coffee. Mrs. Breakfast w/Nick ordered a cortado and I got a pour over. When they asked me what beans I wanted for the pour over, an employee behind the counter whisper-chanted “Panama, Panama…” So I ordered the Panamanian roast. I love it when employees advocate for a favorite product of theirs. Usually it’s a great sign. 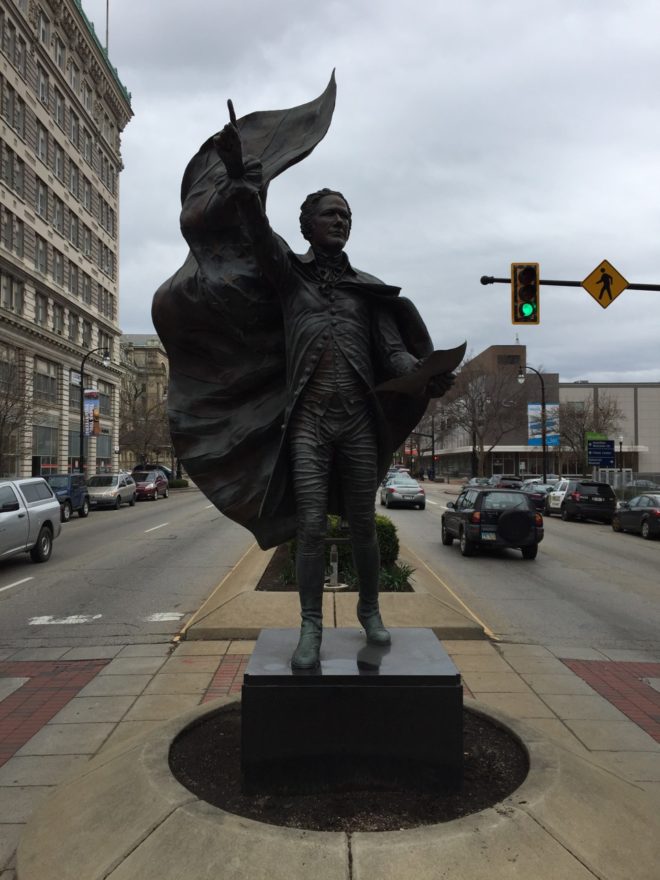 With coffee in hand, we headed west on highway 129 into Hamilton. We prepared ourselves, of course, by listening to Hamilton (“What’s your name, man?”), and as we entered town we wondered aloud if there were any nods to Alexander Hamilton. Lo and behold, the first thing we see is a badass statue of him, finger pointed to the sky, document in hand, and an American flag flowing behind him like a cape. Doesn’t get more iconic than that.

We passed through the center of town to get donuts at Ross Bakery, then doubled back to the city center. 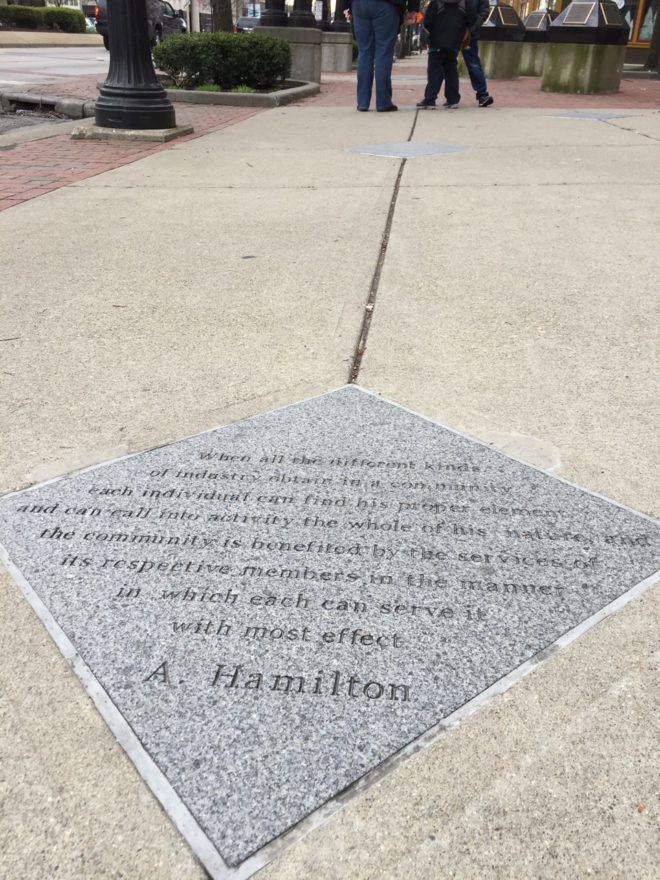 Hamilton, Ohio was established as Fort Hamilton in 1791, back before Ohio was a state and while A. Ham was serving as George Washington’s Treasury Secretary. The center of Hamilton (which is the Butler County seat) features one sidewalk lined with engraved markers showcasing quotes from his writing. Although we only spent a little time in town (more donuts to find, after all), we really enjoyed our time around Hamilton, and are already planning a return trip. 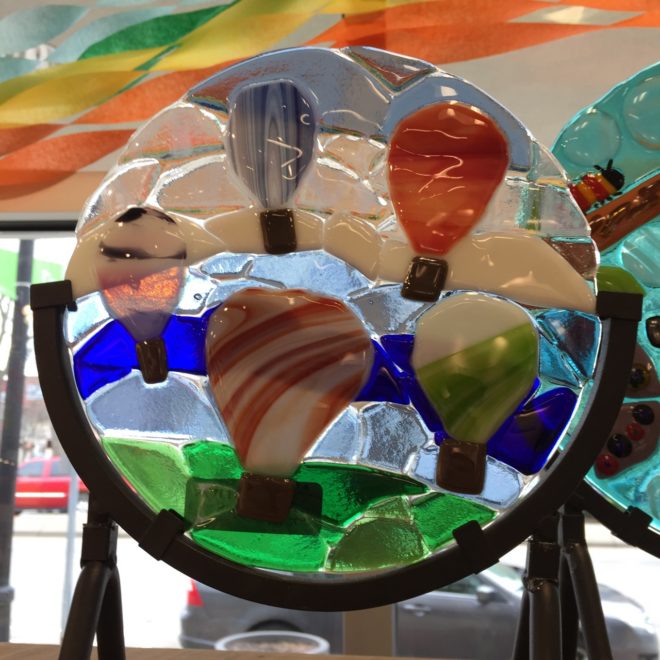 We strolled some of High Street (after we got our pictures with Hamilton, of course), and found a number of galleries, coffee shops, a brewery, and more. We didn’t have time to stop in all of them, but we poked our heads into the InsideOut Studio. 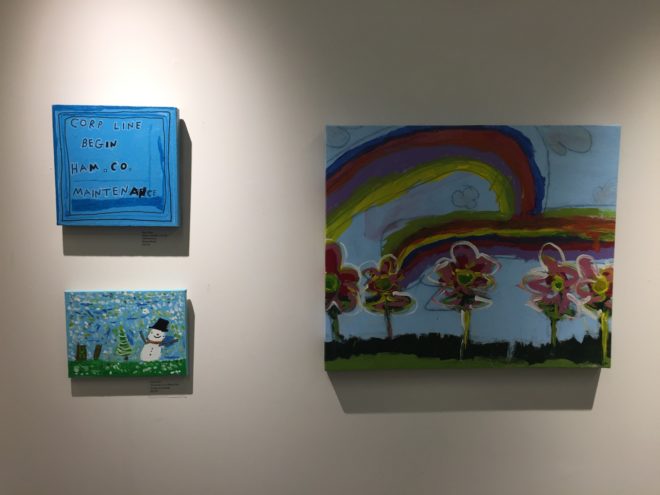 InsideOut serves adults with disabilities, providing them studio space to create artwork and gallery space to exhibit it. 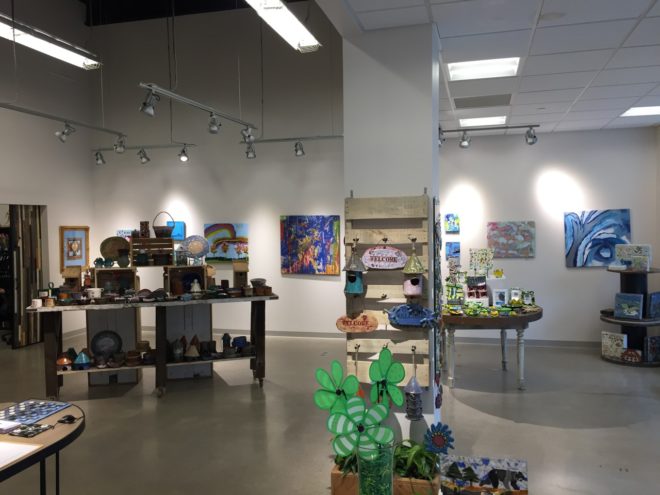 There’s a variety of beautiful pieces, ranging from paintings to glass work. Special note: if you’ve completed your Donut Trail passport and are wearing your T-shirt, you can stop by InsideOut to get a special glass ornament as a reward. 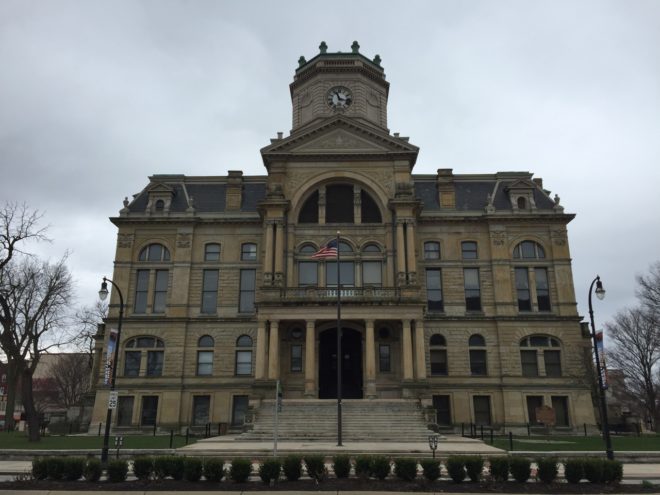 Like I said, we were really intrigued by Hamilton and its arts scene. The curator at InsideOut suggested a couple other galleries to explore during future visits. 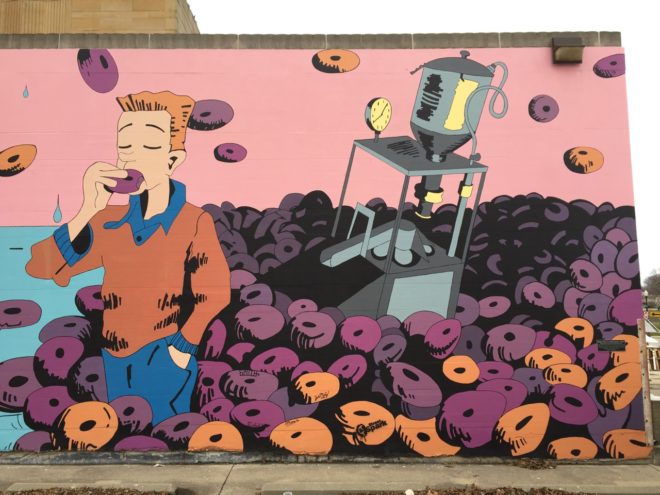 Hamilton itself features a lot of public art, which I love to see. It enhances the experience of any town, large or small, for both visitors and residents. Even in our brief time there, we spotted murals featuring famous books like Homer Price. 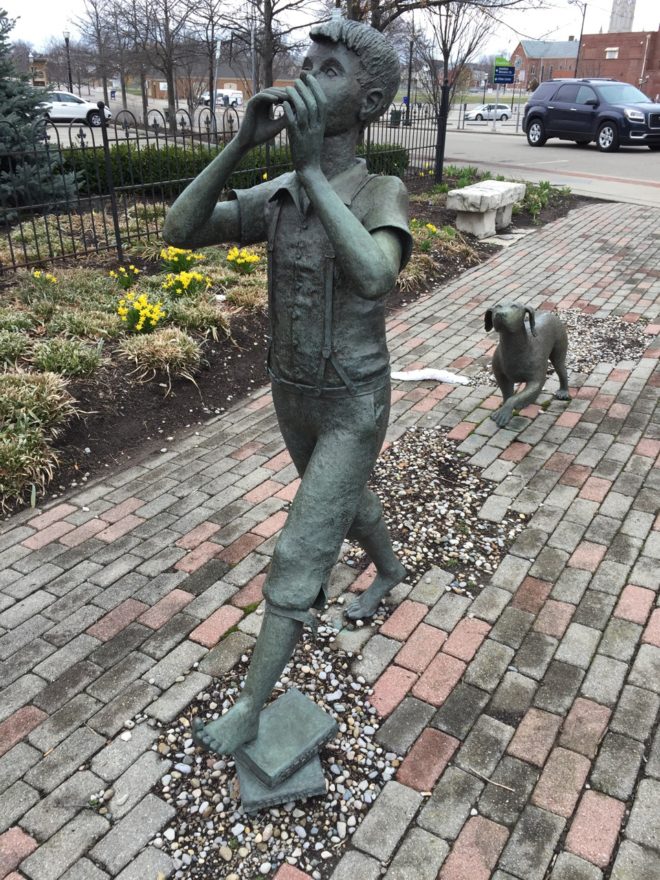 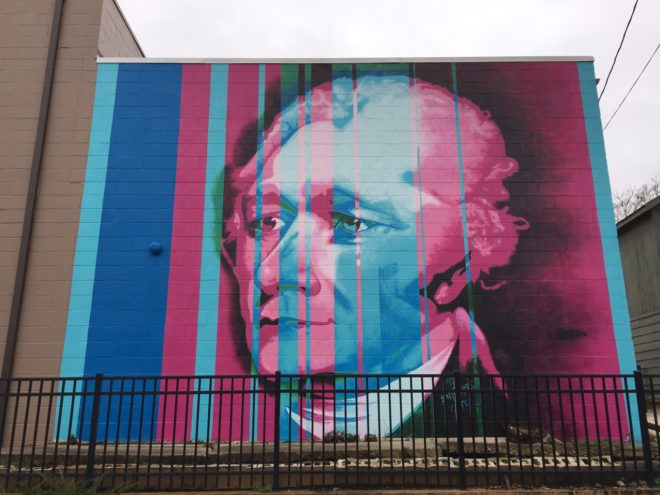 And of course more murals of Alexander Hamilton!

After posing with Hamilton, we visited Kelly’s Bakery and Mimi’s Bakery in Hamilton for – you guessed it – more donuts. 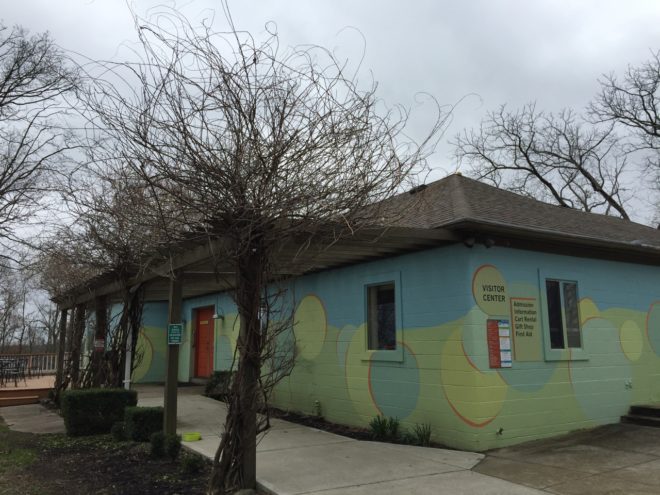 We wanted to stay longer, but we were set to explore Pyramid Hill Sculpture Park, located on a hill just across the Great Miami River from downtown Hamilton. Pyramid Hill opened in 1996 on property owned by Harry T. Wilks, a Miami University alum, attorney, and philanthropist. Wilks purchased the land with the intention of building a house there (which he did – there’s a private residence built partly underground with a glass pyramid skylight!), but decided to convert the land into an outdoor sculpture garden and museum for all to enjoy. The park spans roughly 300 acres on rolling hills above the city. You check in at the visitor’s center to pay admission ($8 for adults, $3 for kids 6-12), and if you want, rent a golf cart ($20/hour) to roll through the park. 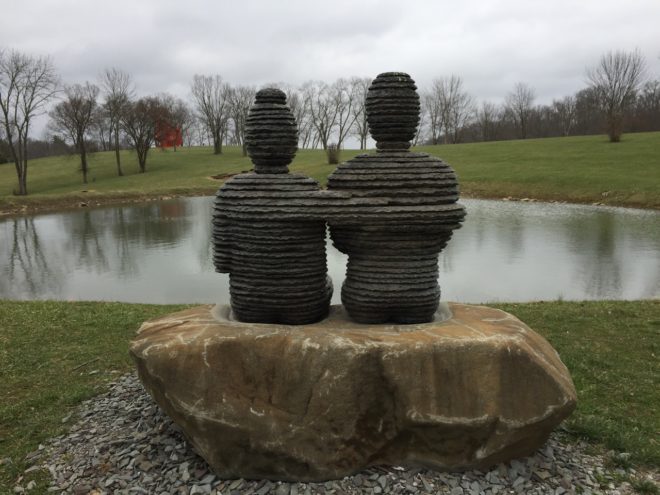 As we drove around the park and visited the museum, we found ourselves wondering why we haven’t heard of Pyramid Hill before. The park is filled with over 65 sculptures of all kids – stone, metal, wood – some abstract, some realistic, some stationary, some moving, all blending wonderfully with the landscape. We stuck to a one-mile loop, although there are plenty of little stops along the way, including viewing areas with benches or great spots for picnics. You can touch the sculptures, they said, although not climb on them. Lots of great interactions for the kiddos. 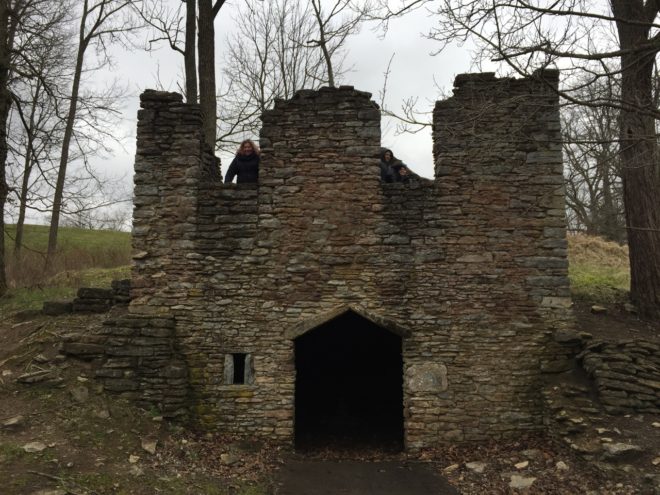 Also on the property is a stone house dating back to 1820. 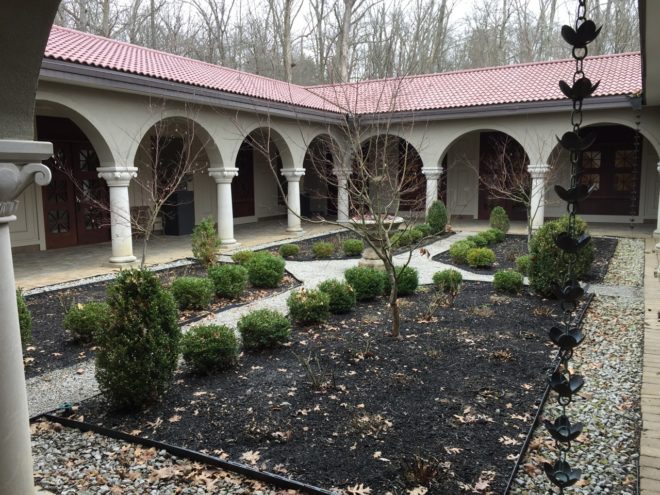 And smack dab in the middle of the park… is a world-class museum. The grounds around the 10,000 square foot museum are beautiful (I can imagine they’d be a perfect wedding backdrop). 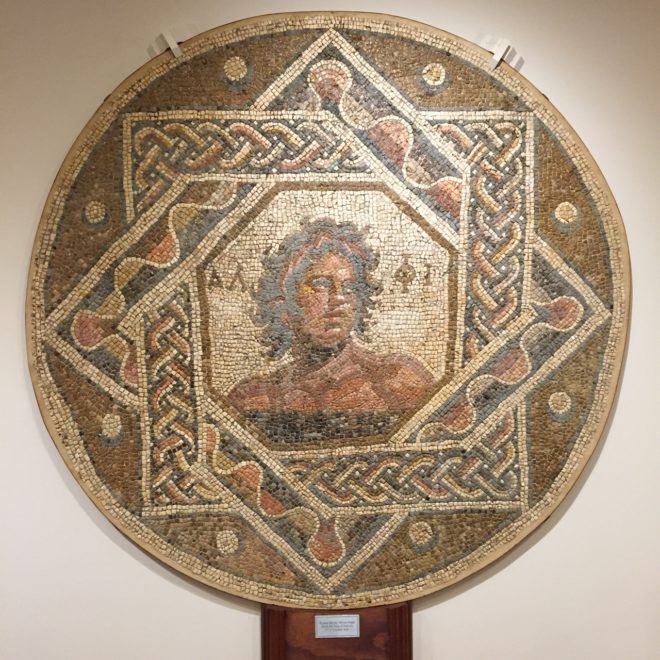 The museum holds a collection of ancient Greek, Roman, Egyptian, and Etruscan sculptures. 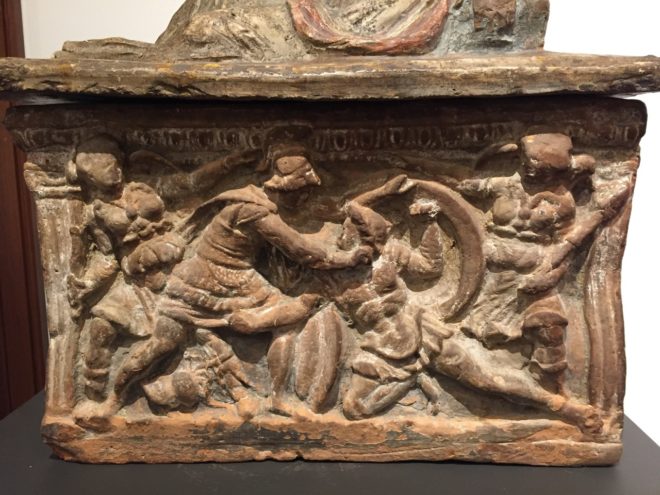 It’s not large, but we found ourselves amazed as we strolled the rooms, staring at detailed sculptures, masks, pottery, and mosaics dating back thousands of years. 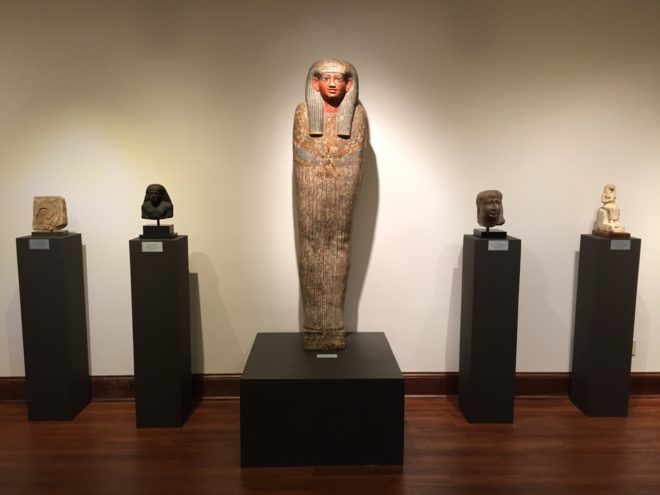 We had no idea we’d find such pieces in the middle of a park in southwestern Ohio. 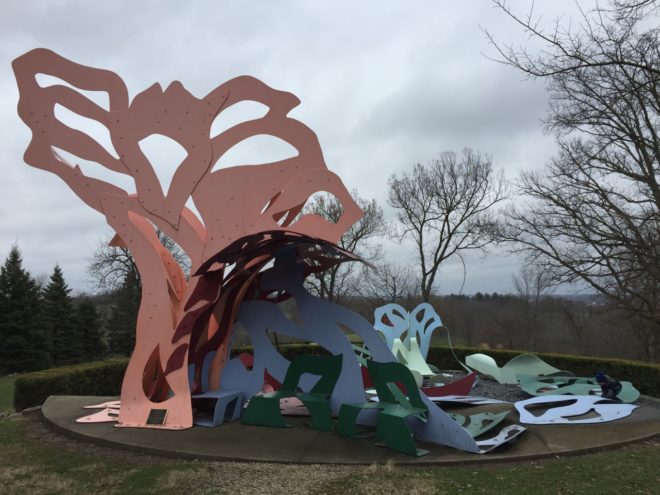 Even before we left Pyramid Hill, we were planning a return trip. There’s more so much more to explore, including hiking trails throughout it.

But our journeys weren’t over! Continue on to part two for more details on Butler County, read up about the Donut Trail and brunch at Cozy’s Cafe in Liberty Township.

Disclaimer: accommodations and attractions were arranged by the Butler County Visitors Bureau. Photos and opinions are my own.