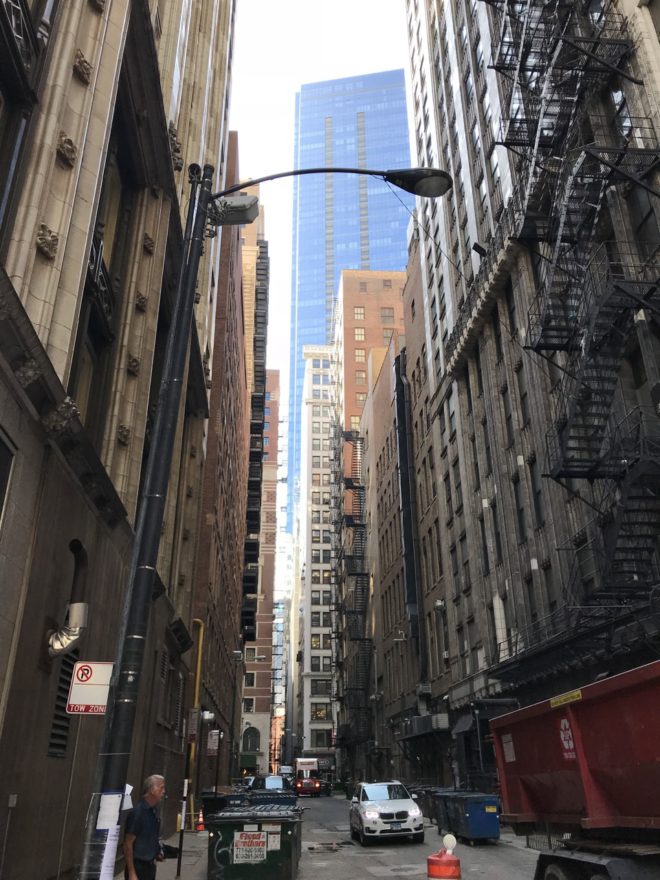 Last month we had the joy of re-connecting with Chicago after being away for several years. In a whirlwind 48 hours we explored restaurants, parks, coffee shops, saw Hamilton, and much more. Check out the first part of our adventures here, and read about our incredibly rich breakfast at Stephanie Izard’s Little Goat Diner in the West Loop. After breakfast we caught the train east back across the river and toward the Lake Michigan shore, dedicating time to enjoy the day and walk off breakfast. 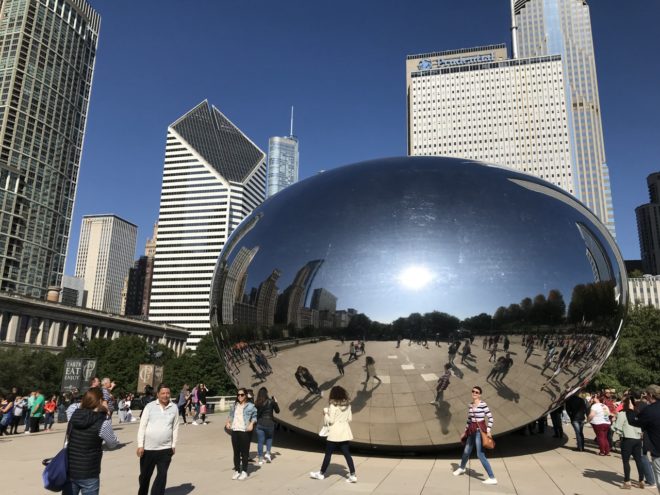 We started at the iconic Bean (technically named the Cloud Gate). 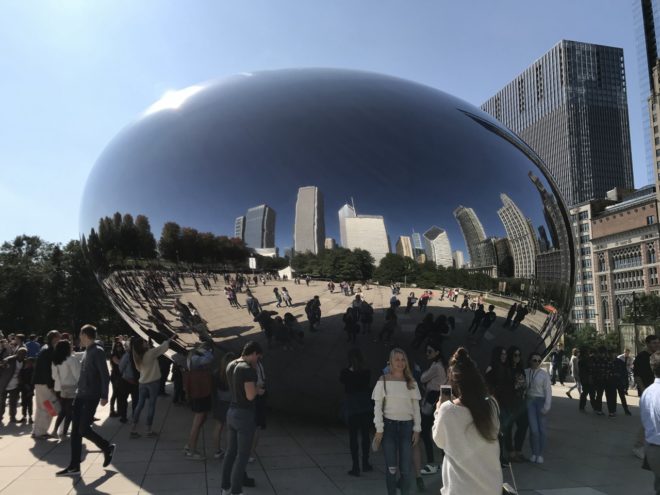 When you catch a beautiful, blue-skied day like we did, you’re drawn to the sculpture and the changing reflections of the skyline as you move around and underneath it. 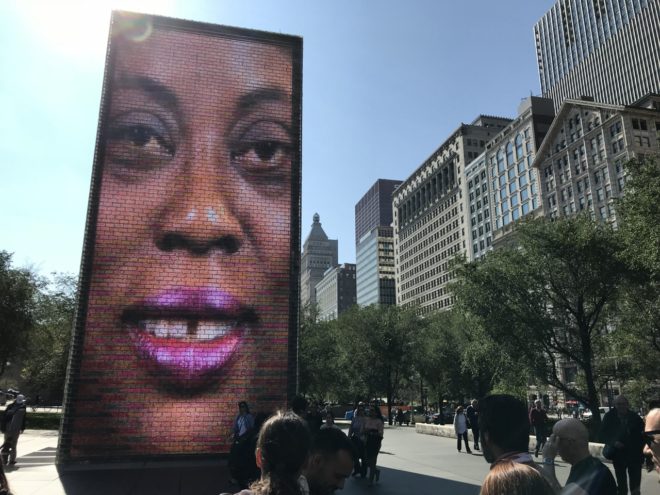 The surrounding parks and plazas are well worth exploring, including the Crown Fountains in Millennium Park, with their changing video displays. They weren’t shooting water that day, though! 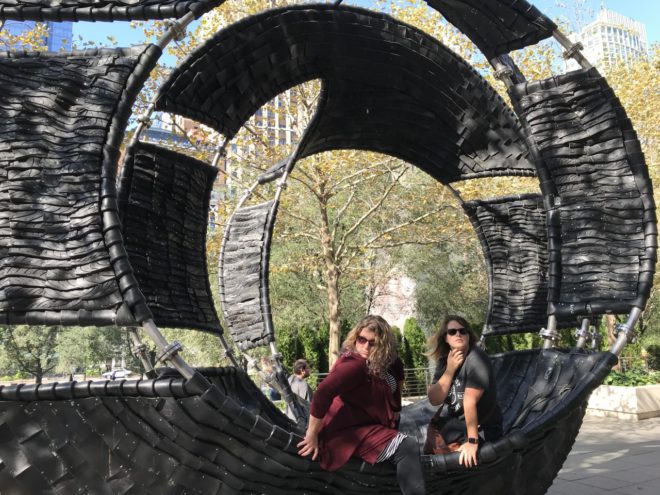 I also love public artwork that can be explored and climbed. 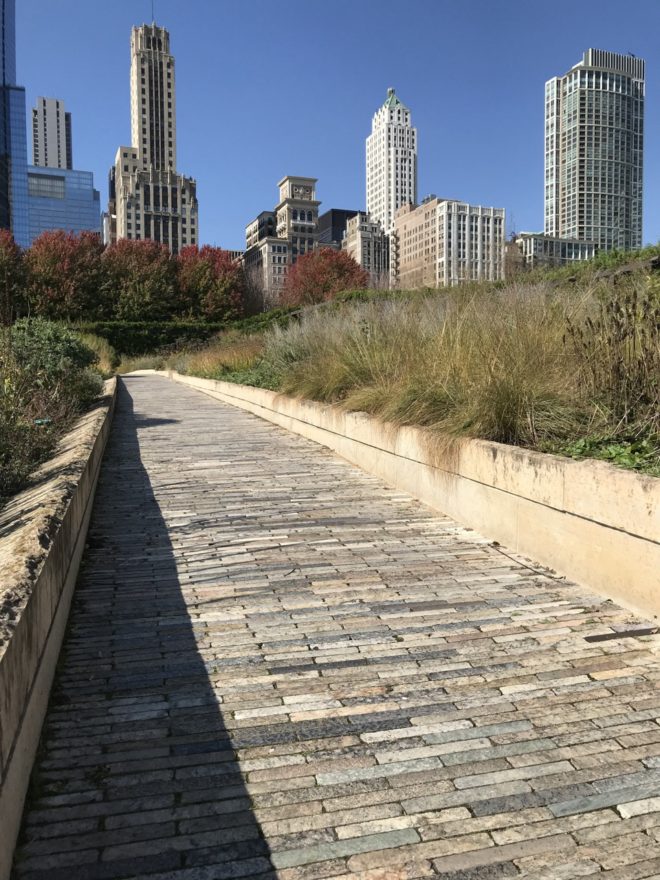 We strolled all over the park, including the Lurie Garden, a four-season garden across from the Art Institute. The space feels secluded and yet connected to the city at the same time. 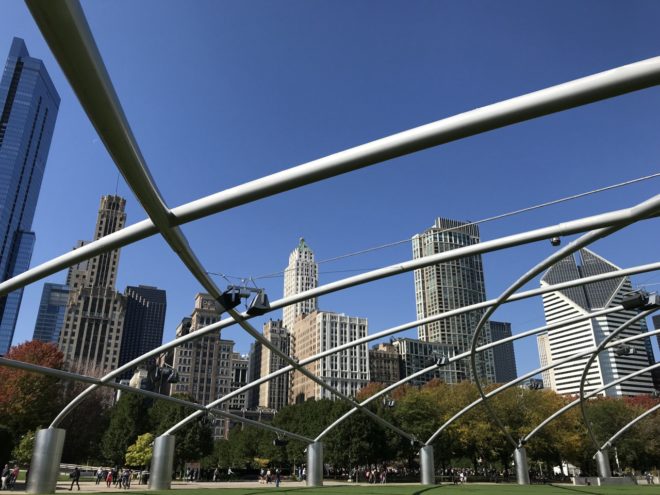 We poked around the park… 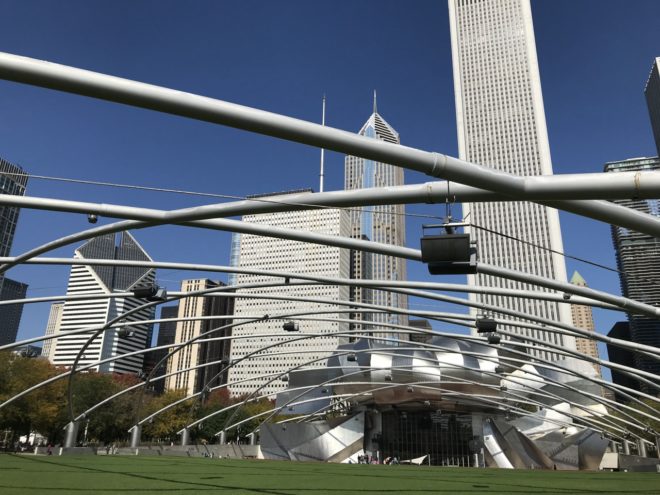 …and the Frank Gehry pavilion. 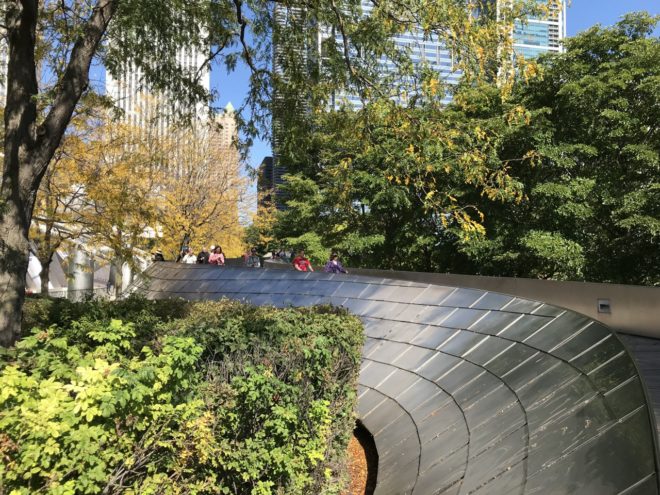 And then found the Gehry-designed pedestrian bridge. It spans Columbus Drive and connects you to Maggie Daley Park. 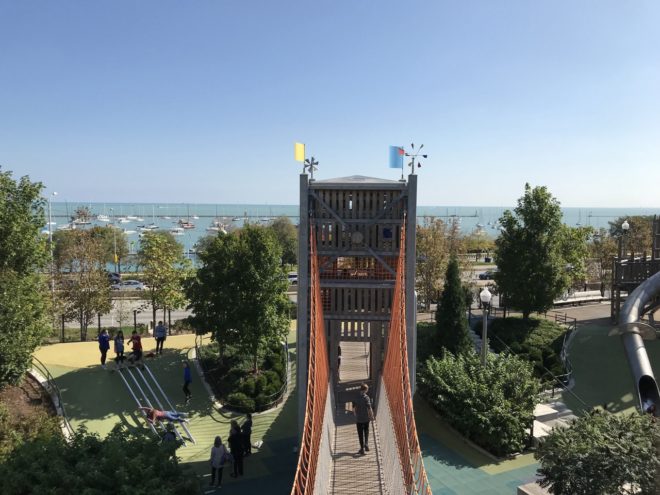 The park is a kid’s wonderland, and we found ourselves remarking how we can’t wait to introduce it to the boys. There are playgrounds and paths, games and climbing structures, all within view of the Lake Michigan shoreline. 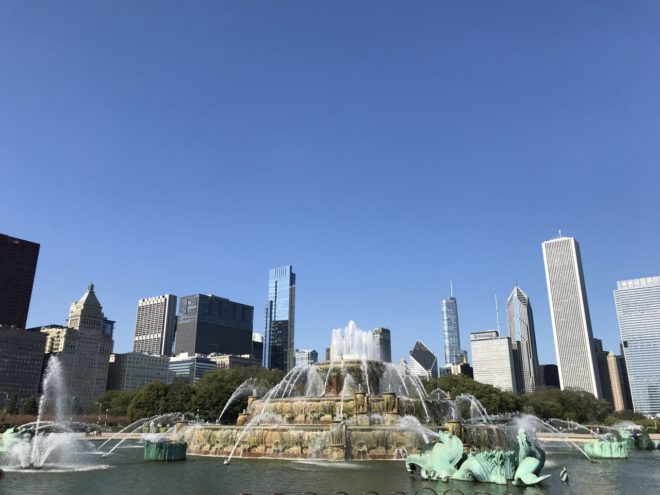 From there we strolled through the rest of Grant Park, past Buckingham Fountain and back toward Michigan Avenue. 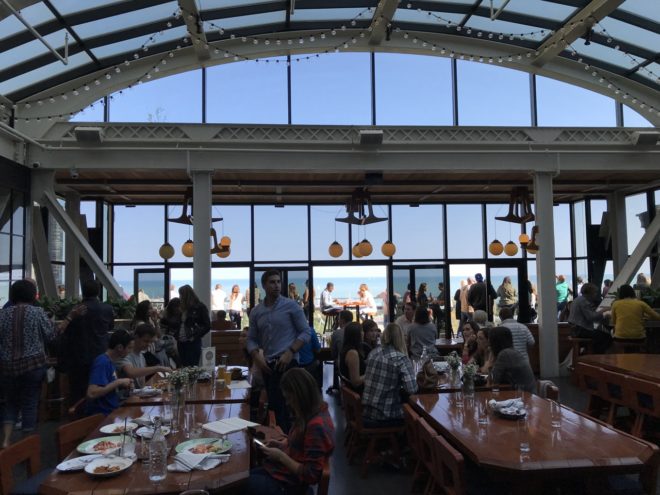 Robin and Jodi led us to a spot called Cindy’s Rooftop, up on the thirteenth story of the Chicago Athletic Association building, which has since been renovated into a gorgeous boutique hotel. 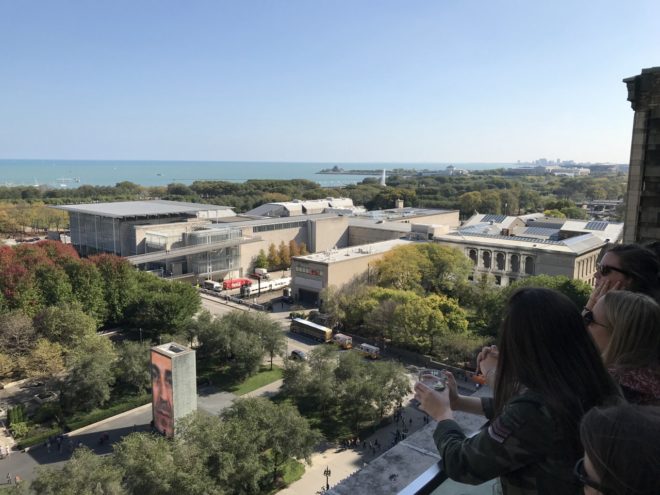 We lucked out with a simply beautiful day. Cindy’s is a full service bar and restaurant, but even a simple afternoon stop for drinks is enhanced by the view. 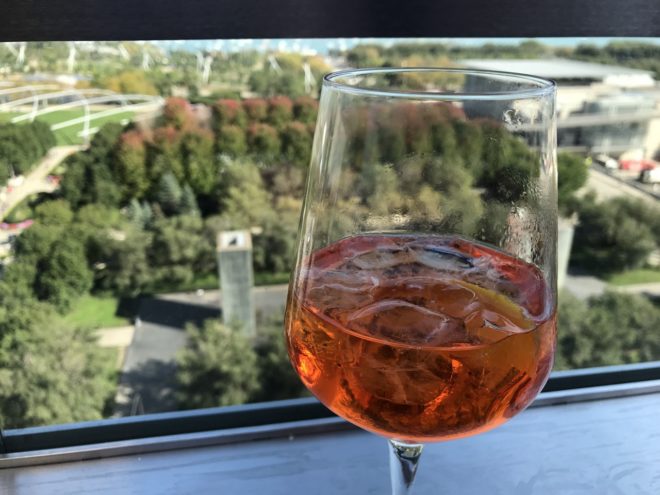 The day was relatively warm, so we sipped Aperol spritzes while we relaxed and took in the skyline and the shoreline. 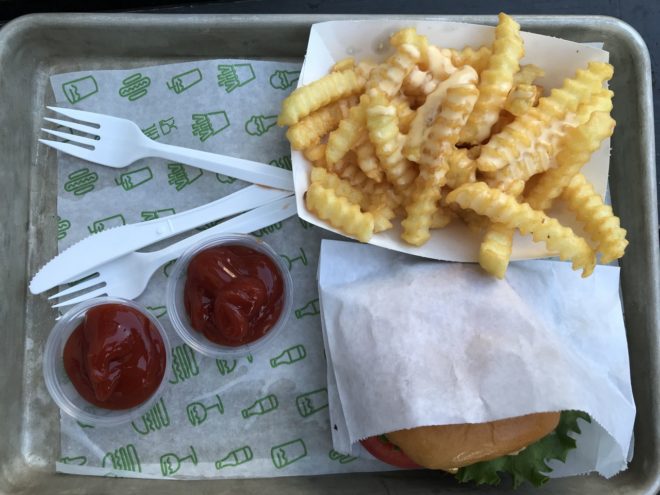 And then downstairs – lo and behold – is a Shake Shack. 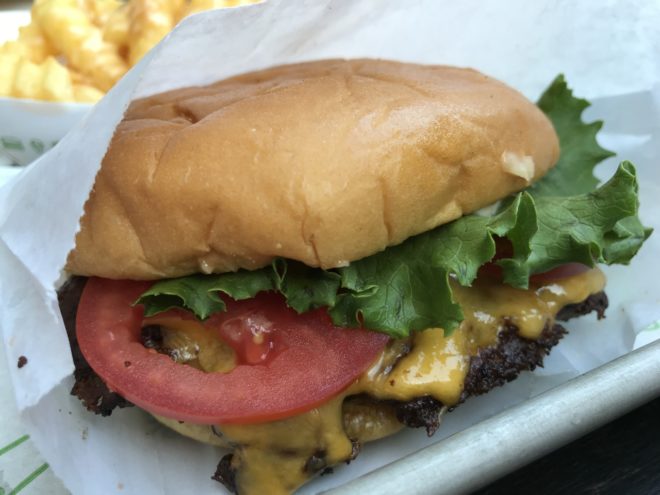 It was our first experience with Shake Shack, and while it seems a little odd to experience a New York City institution (restaurateur Danny Meyer started Shake Shack in Central Park), we welcomed it with open arms. Was it worth the hype? Well, yeah. There’s nothing complicated about it, but it’s just a really, really well done burger. Sometimes simplest is best!

Read on for part three! And if you haven’t already, read part one of our adventures or check out breakfast at the Little Goat Diner.