Getting Into Indianapolis – Part 1 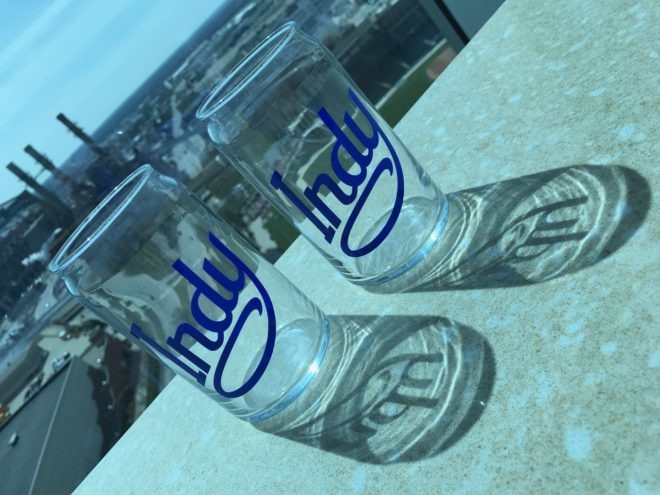 One of the things we brag about in Columbus is how we’re within driving distance of more than 50% of the U.S. population. What that means, practically, is that many of our country’s great cities are easily accessible, making them ideal for weekend trips – and thanks to Visit Indy, we were afforded the opportunity to explore Indianapolis! 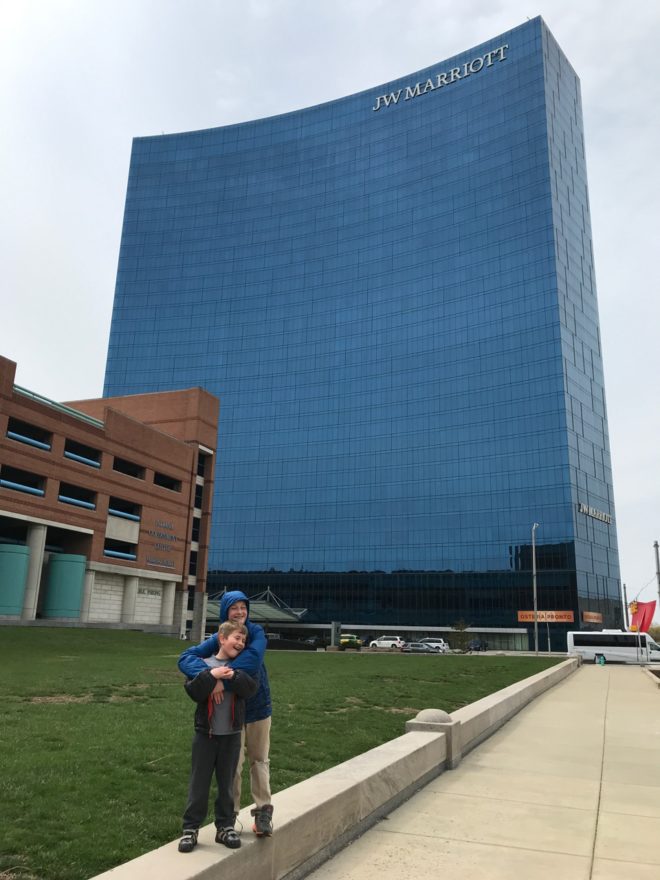 Our base of operations for the weekend was the JW Marriott. The tall, slightly curved glass building stands across from the convention center, and looks out over the White River and the surrounding parks, Lucas Oil Stadium, and Victory Field ballpark.

From the boys’ perspective: it had great views and a pool. They were in heaven. 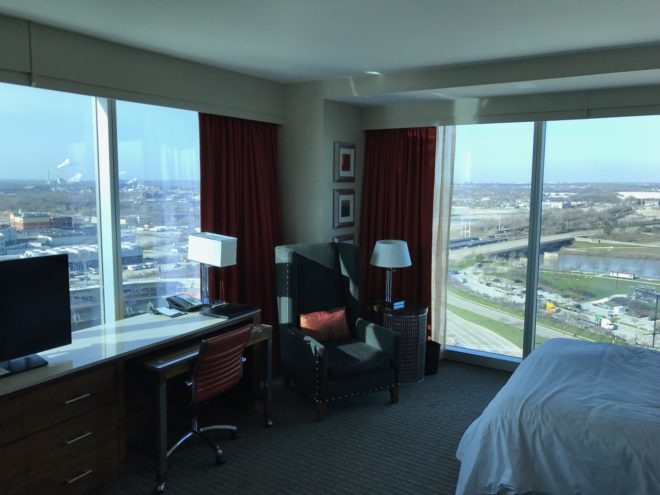 The entire hotel is clean and modern, with easy accessibility to the rest of the city. Owen appreciated the view of the train tracks that runs through town; we watched many trains rolling by throughout the weekend. 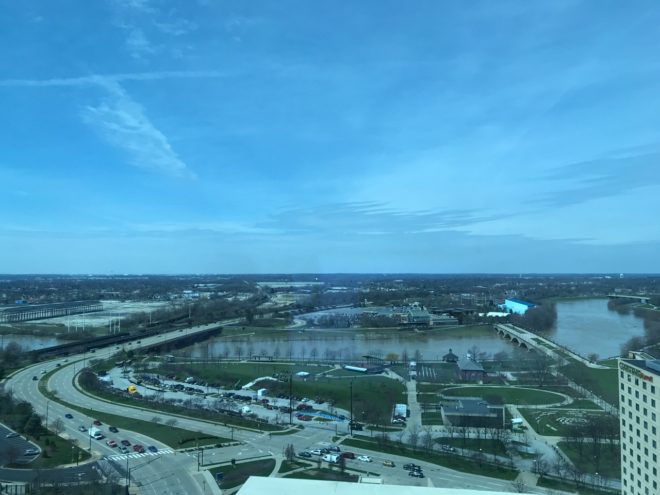 And right outside the hotel is a collection of parks and museums, plus the Indianapolis Zoo across the river. 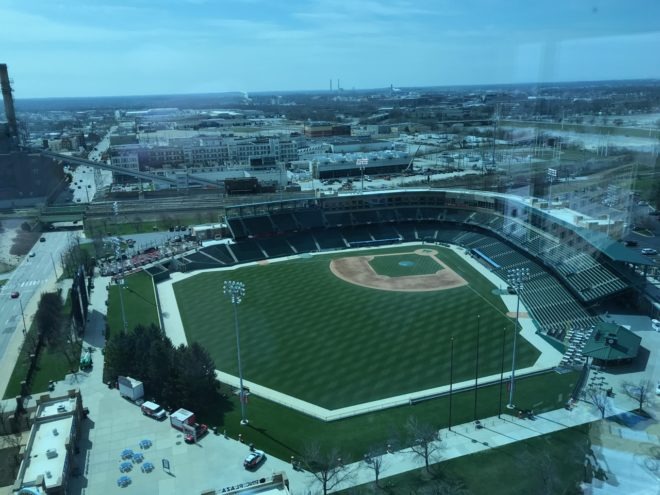 Our two nights at the hotel coincided with the Indianapolis Indians‘ home opener, so both nights we had a birds-eye view of the games (and the first night, there were fireworks!). And lo and behold, they were playing our very own Columbus Clippers! 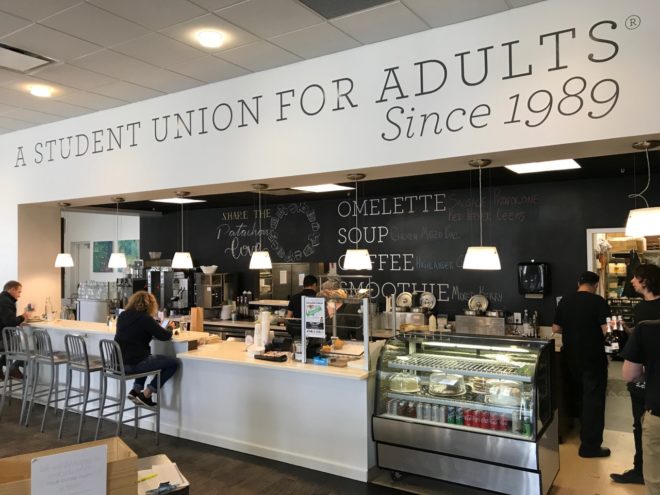 After getting settled we strolled toward the city center for a late lunch at Cafe Patachou: “A student union for adults since 1989.” The brunch-focused cafe features several locations around the city, and enjoys a very loyal following. 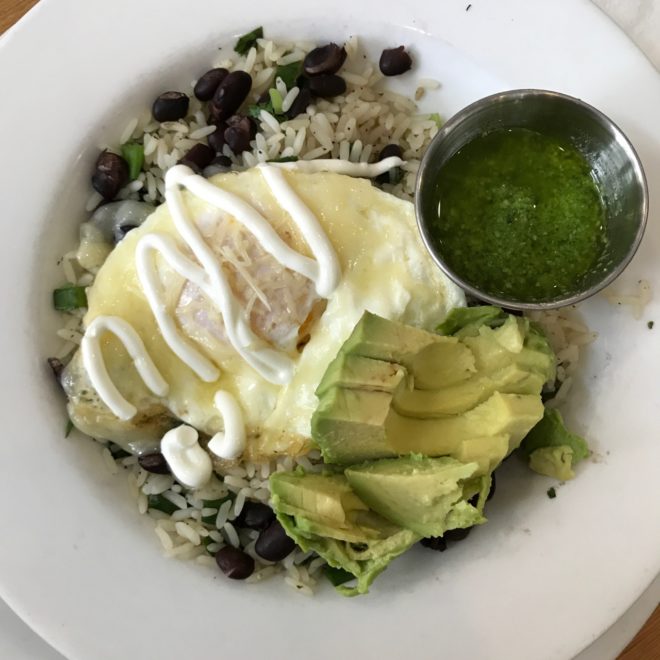 Our server kindly walked us through the menu and highlighted their greatest hits. We landed on the Cuban breakfast, with a fried egg over black beans and rice, cheddar, avocado, sour cream, and a spinach-jalapeño sauce. 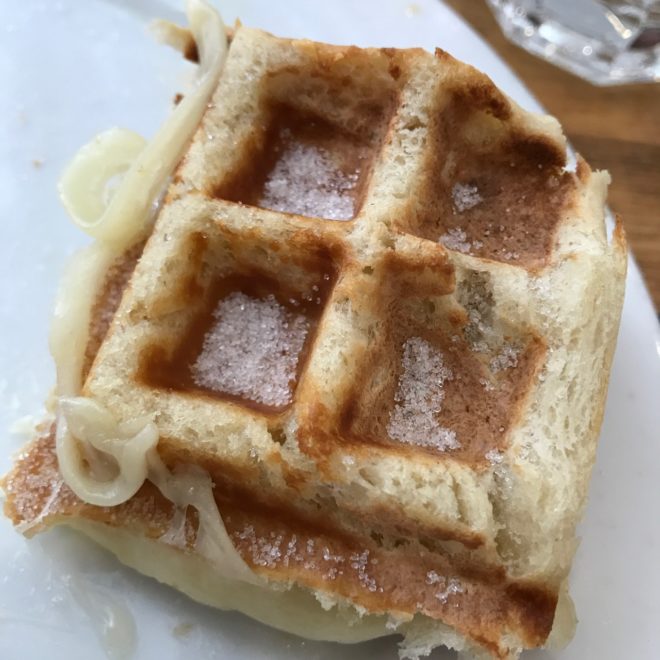 We also sampled the southern-style grilled cheese sandwich, pressed into a waffle iron and dusted with sugar. I feel like I’ve been missing out. Sugar on grilled cheese? This is a southern thing? I’m a northerner by birth, so I’ve never heard of it, but I can always get behind a proper sweet and savory combo. 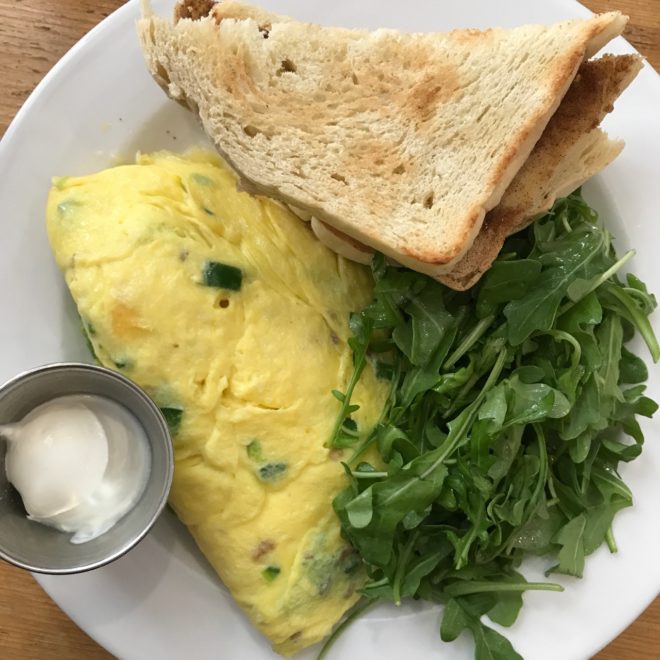 Our server said Cafe Patachou specializes in omelets, so we followed a friend’s suggestion (thanks, Luke!) and ordered the California Dreamer with avocado, white cheddar, jalapeños, and sour cream. 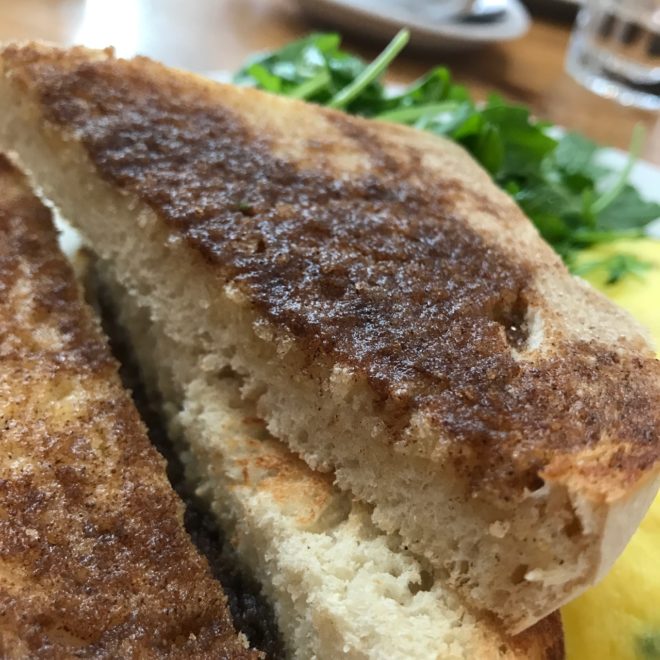 Oh, and also there’s this cinnamon toast that everyone raves about. When we mentioned the cafe on social media or to anyone else later, the resounding chorus was “I hope you got the cinnamon toast!” Indeed, we did. It’s sliced thick, buttered, and topped with cinnamon sugar. And it brings back a lot of childhood memories. 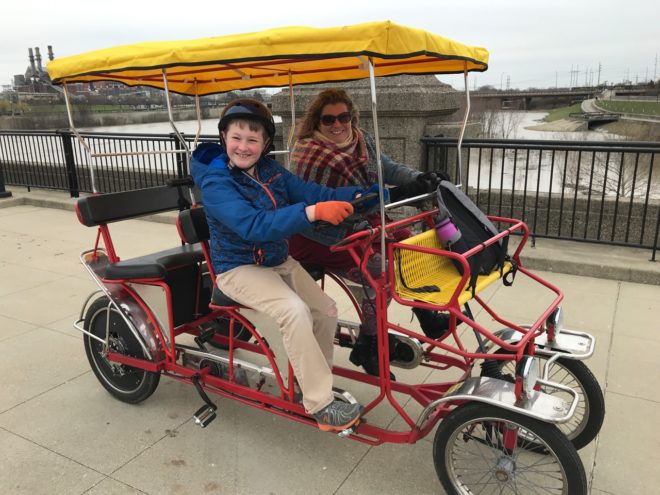 After lunch we made our way back to the hotel to regroup, then headed out to White River State Park. The entire park complex includes the baseball stadium, the zoo, and an IMAX theatre, plus the Indiana State Museum, the NCAA Hall of Champions, and the Eiteljorg Museum, which houses Native American and Western art and culture. In the center of the park you can rent a variety of bikes through Wheel Fun Rentals. We hopped onto a four-person surrey and rode along the riverfront and the bridge. There’s a learning curve, and we didn’t fully understand the paths at first – and get ready for some exercise if you’re headed uphill – but we had fun nonetheless. 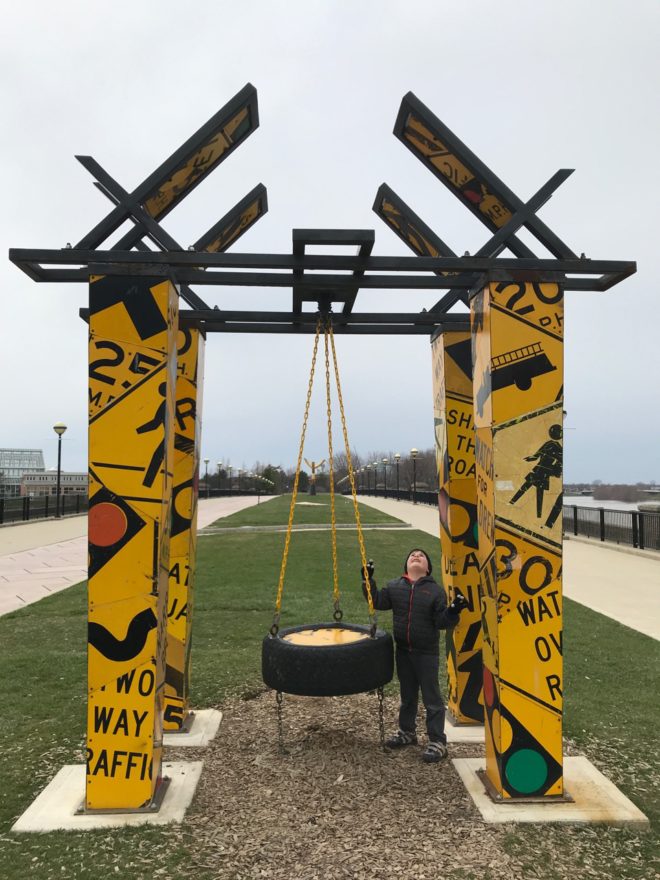 Afterwards we took the pedestrian bridge west across the White River toward the Zoo. Along the way we admired the variety of public artwork. I’m a big believer in public art enhancing any place, from small towns to big cities, so I love to see the investment in it. Owen and I stopped to admire this piece constructed from used road signs. 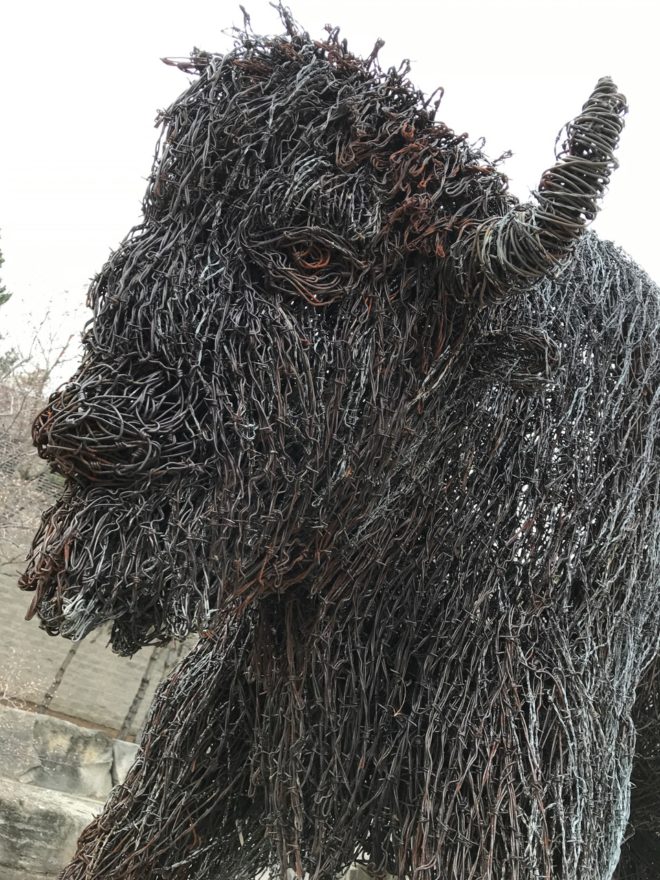 Closer to the Zoo we found this giant buffalo sculpted from barbed wire. 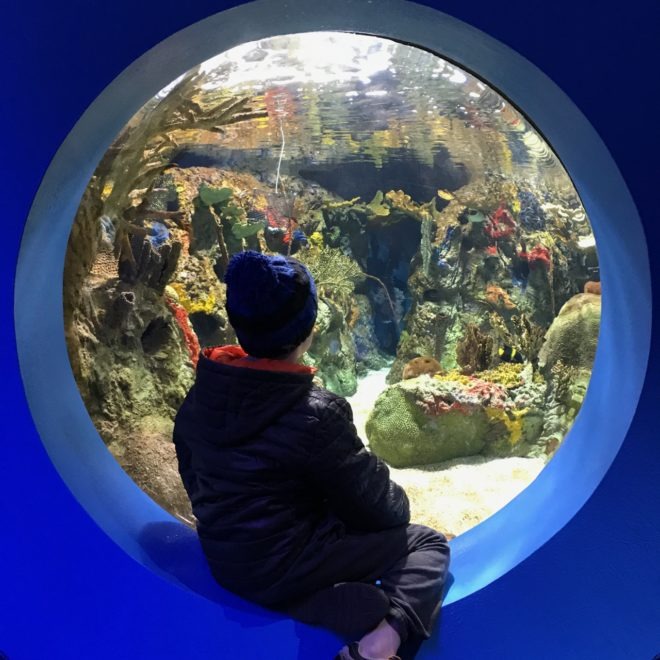 And then we got to dive into the Indianapolis Zoo. It was a blustery day, so we didn’t visit the entire zoo, but we got to see the major exhibits they have to offer, starting with the aquarium. Owen and I spent some time admiring all the colorful fish from the bay windows. 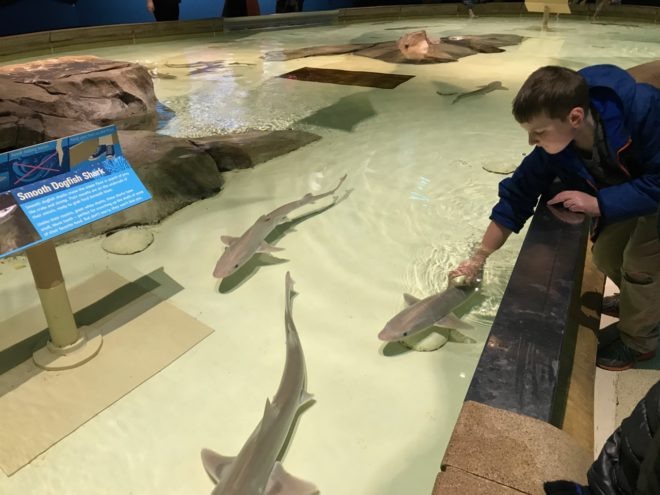 Then we pet sharks… 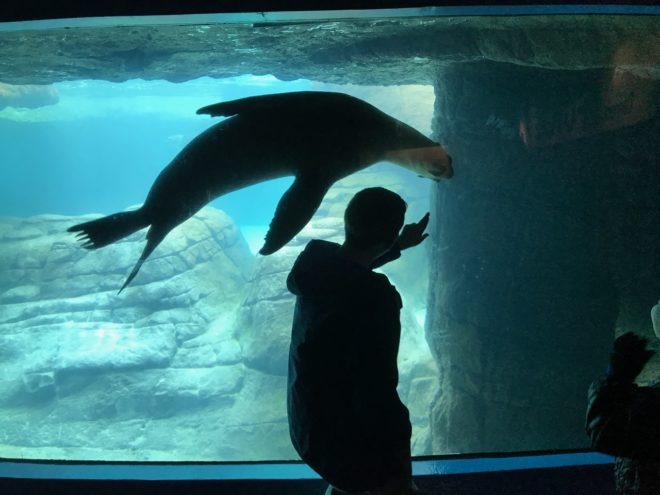 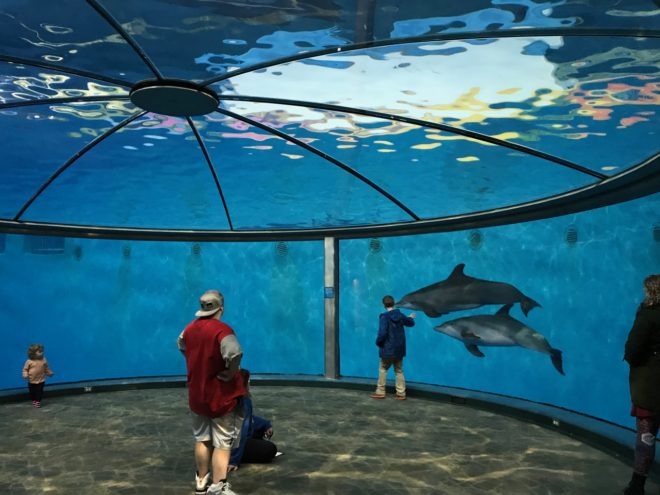 …and sat under the dome to watch dolphins swim all around us. 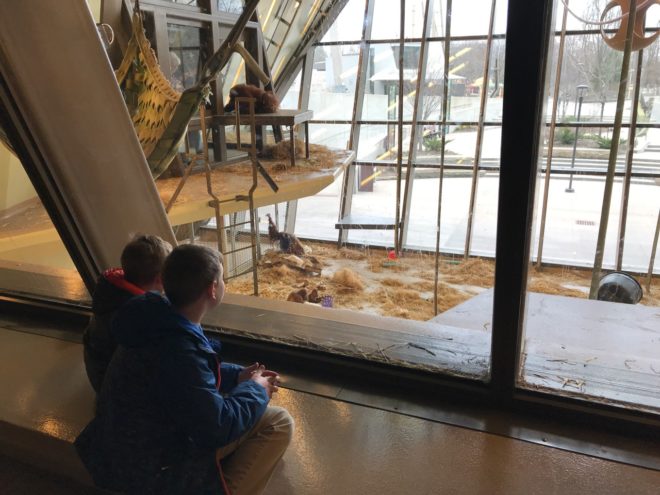 We finished at the Simon Skjodt International Orangutan Center, sitting smack-dab in the center of the zoo. You can’t miss the towering, triangular structure. It offers indoor and outdoor views of the orangutans in their spacious habitat. We watched them climb from landing to landing, admiring especially the months-old orangutan who jumped and played all around his mother. 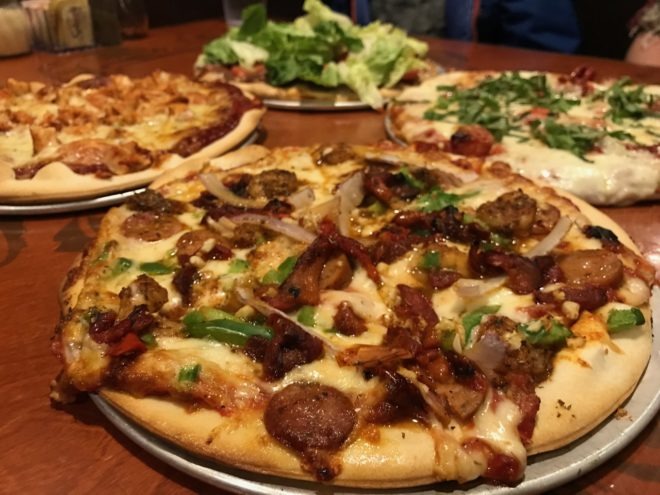 After our time walking around the zoo, we jetted back into downtown Indianapolis to Massachusetts Avenue. Mass Ave, as it’s called, is a long district running at 45 degrees southwest to northeast out of downtown, lined with shops, restaurants, bars, galleries, and more. We recognized a few familiar names from Columbus and Cincinnati, like The Eagle and Bakersfield.

We settled in at Bazbeaux Pizza for garlic bread, pizzas, and beers (for the adults, that is). Bazbeaux lets you build your own pizzas or select from a wide-ranging list of specialties. We sampled from the Tchoupitoulas with Cajun shrimp, andouille sausage, and roasted red peppers, to the Magherita, to a simple cheese pizza. It was also a great opportunity to sip some Indianapolis beers, like Upland Brewing’s Dragonfly IPA and Black Acre’s Saucy Intruder rye IPA. 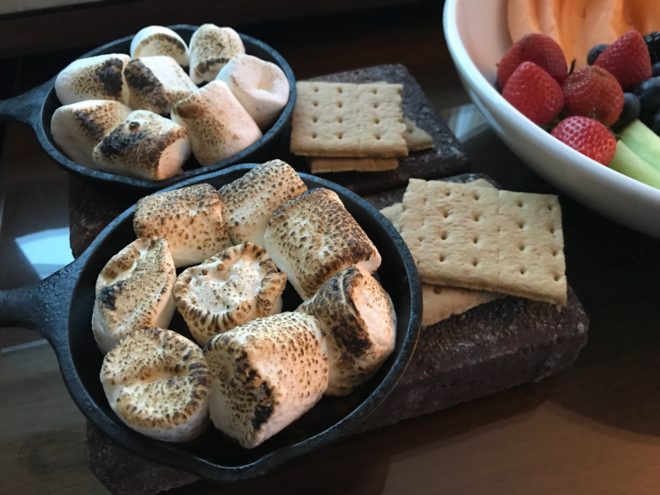 After that, it was back to the hotel for some swimming and then off to bed. When we arrived back at the room, we found a surprise treat waiting for us: a bowl of fruit and a tiny cast iron pan with melted chocolate and toasted marshmallows, so we could assemble our own s’mores. 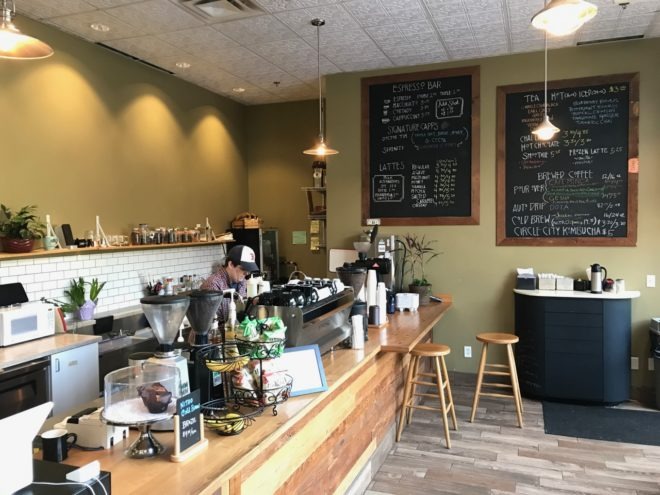 The next morning we were up early, starting with coffee at Bee Coffee Roasters. Bee Coffee features two locations; their roastery in northwest Indianapolis and a shop across from the convention center. 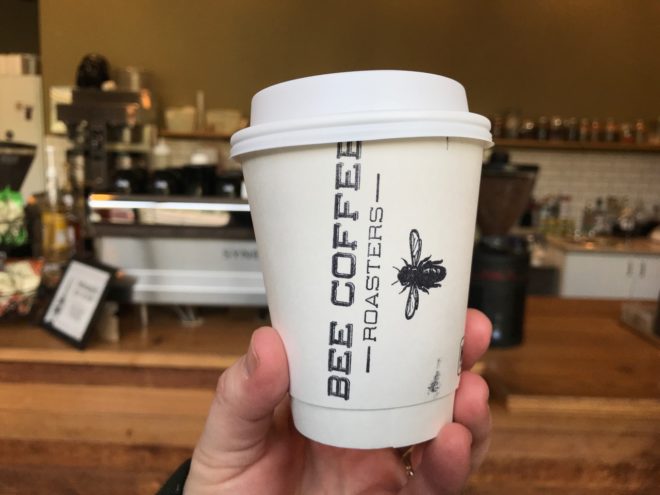 We snuck in a cortado and a specialty cappuccino called the Doctor Tim, with three shots of espresso, breve (half and half instead of milk), honey, and cocoa. It was certainly a kickstart. And then it was off to breakfast at Maxine’s Chicken & Waffles!

Keep reading about our Indy adventures in part two!

Disclaimer: this visit was hosted by Visit Indy. Photos and opinions are our own.