Getting Into Indianapolis – Part 2 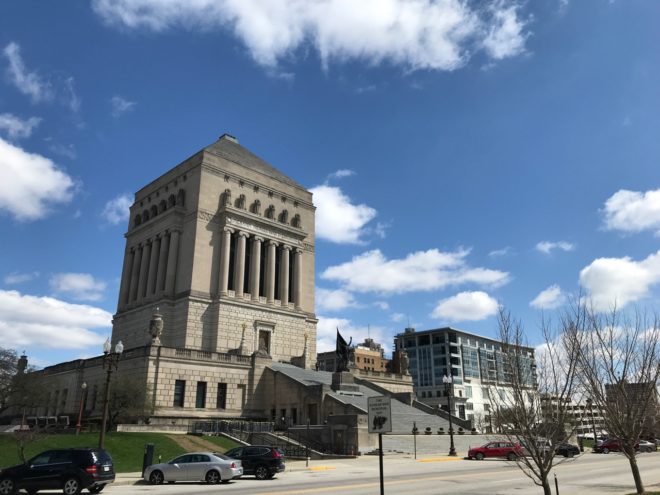 In early April we were invited by the folks from Visit Indy to explore Indianapolis for the weekend. We lucked out with beautiful spring weather while we got to know Indiana’s capital city. In part one (read it all here!) we got to know the JW Marriott, had lunch at Cafe Patachou, rode a surrey around White River State Park, visited the Indianapolis Zoo, and tasted pizza on Mass Ave; the following morning we snagged cappuccinos at Bee Coffee Roasters before finding breakfast at Maxine’s Chicken & Waffles. And that leads us here.

Following breakfast, we wanted a stroll, so we headed to the Indiana War Memorial Plaza Historic District. It’s a large collection of buildings and public squares honoring veterans from the Hoosier State. 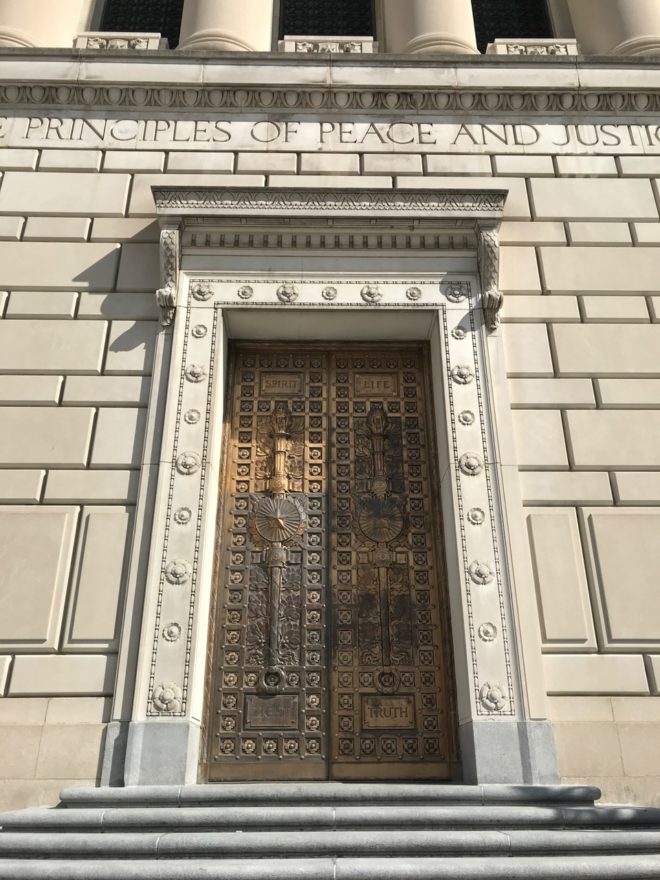 The centerpiece is the towering Indiana War Memorial Museum, a classically designed structure erected following World War I, and existing as an on-going reminder of those who have served through the present day. 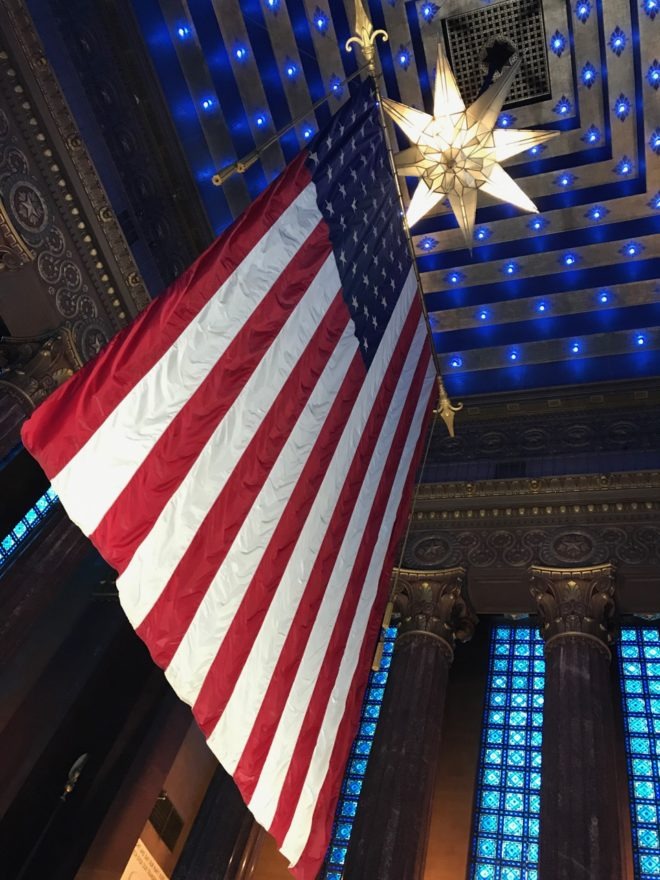 The center of the building is the stunning Shrine Room, with sweeping, 110-foot ceilings. Hanging in the center of the space is the Star of Destiny, made of Swedish crystal, plus an enormous American flag. We caught up with a tour in progress and learned a bit about the purpose of the room. The shrine in the middle is not a tomb; instead, the building was created to honor those who had fallen in World War I, and to remind citizens of their civic and moral responsibility during peacetime.

The shrine was engraved with text on each side. My favorite was:

“The true patriot best supports his government by creating friendliness through kindness and generosity wherever fate may carry him.” 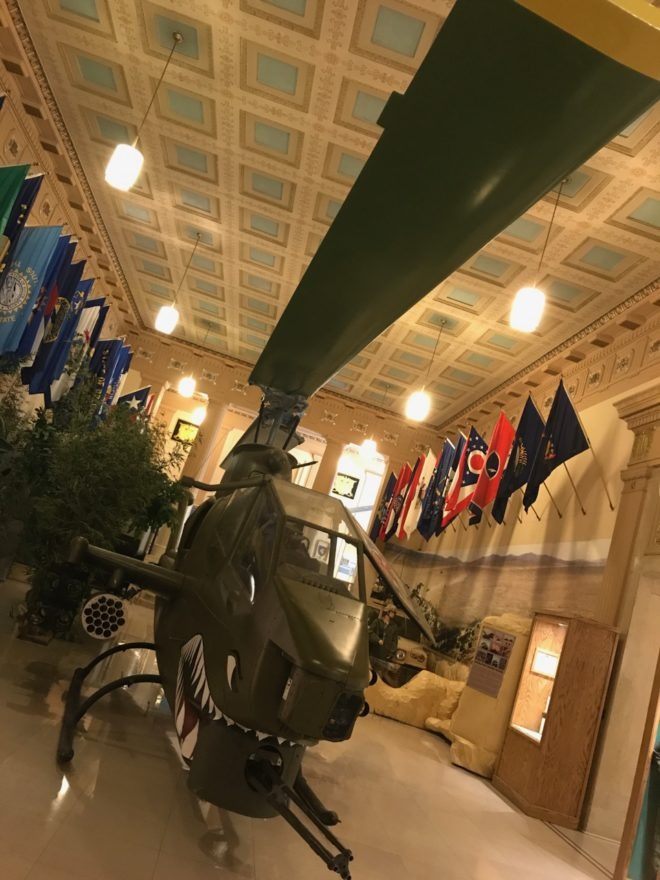 The lower levels are dedicated to other conflicts, like a section recreating the radio room of the U.S.S. Indianapolis, or rooms about the Korean War, Vietnam, 9/11, Iraq, and Afghanistan. 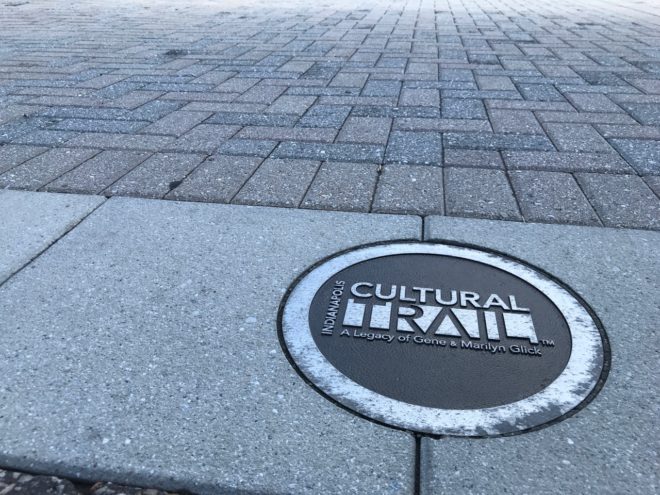 After touring the Memorial, we jumped back in the car to explore more of the Mass Ave. district. Massachusetts Avenue runs at a 45-degree angle heading northwest out of downtown Indianapolis. It’s populated with shops, galleries, restaurants, and bars. 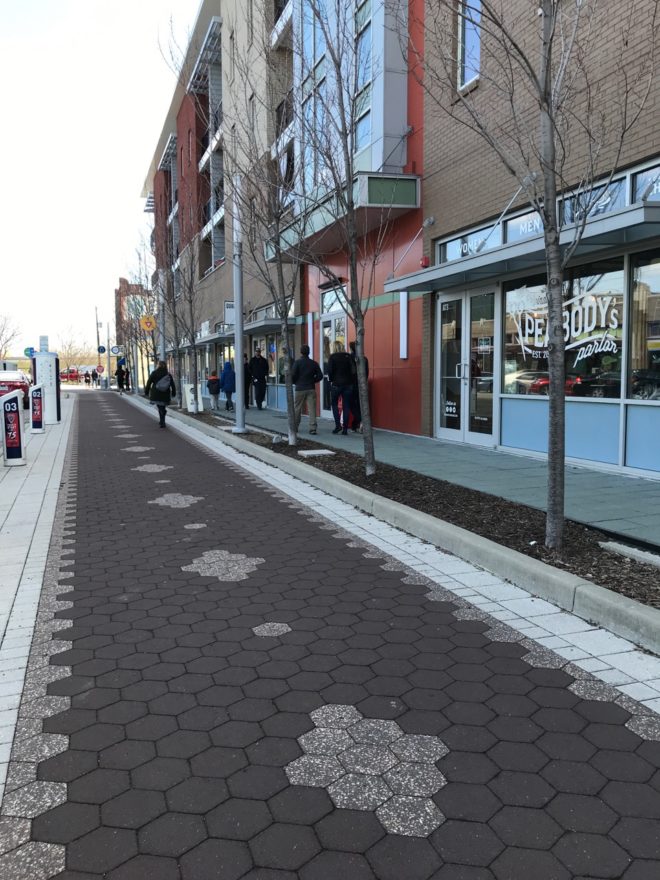 The trail incorporates eight miles of pedestrian and bike paths, and is demarcated by a brick path. The trails snake throughout the entire city and connects the various cultural districts, so you could walk or ride a bike all around the city, from White River State Park to Monument Circle to Mass Ave to the plazas surrounding the War Memorial. It even connects to some of the larger greenways that extend out of the city. You can see the complete map here.

Personally, I think this is brilliant. One of the challenges of our growing cities is how to become more walkable and bike friendly, and providing this trail to connect the city is a huge step in that direction. 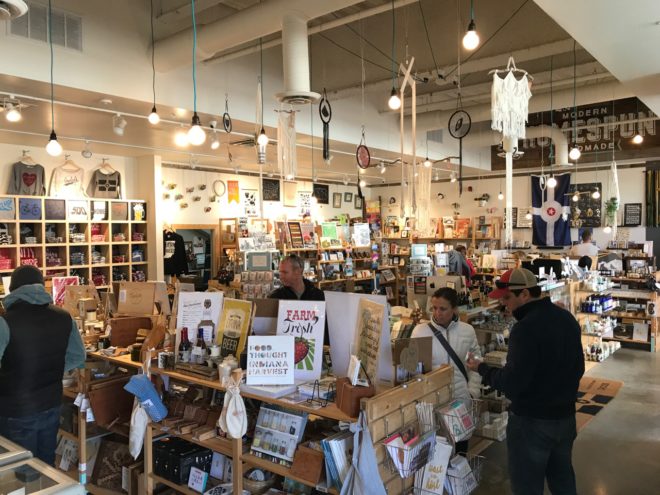 We hit up a few shops along the northeastern edge of Mass Ave, including the adorable Homespun. 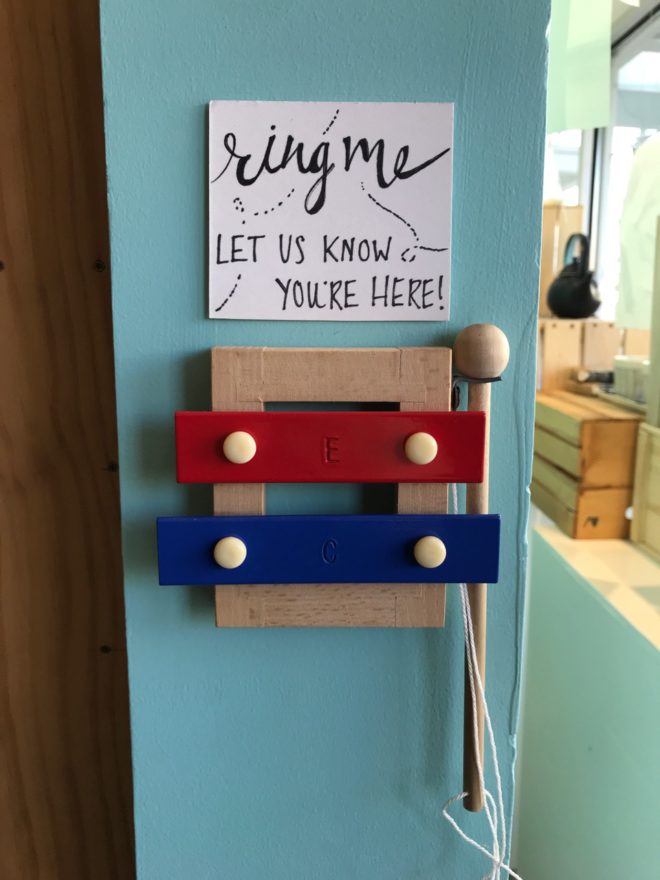 Homespun features cards, gifts, artwork, snacks, and more. We had a bit of a personal connection, as they carry cards from Igloo Letterpress. 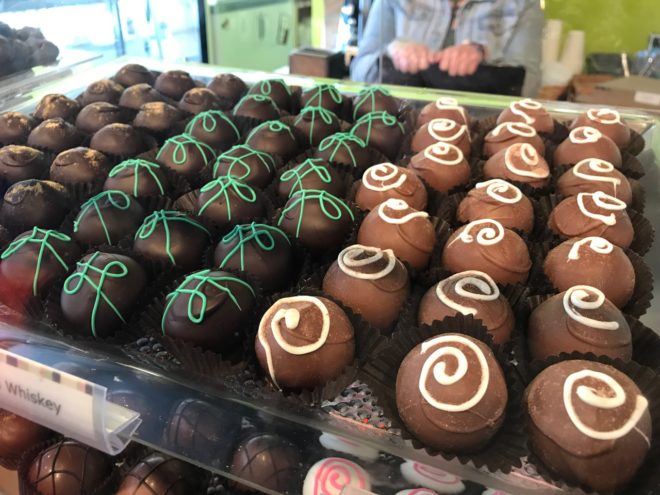 We also snagged a quick sweet treat at Best Chocolate in Town, an adorable little chocolatier and ice cream shop. 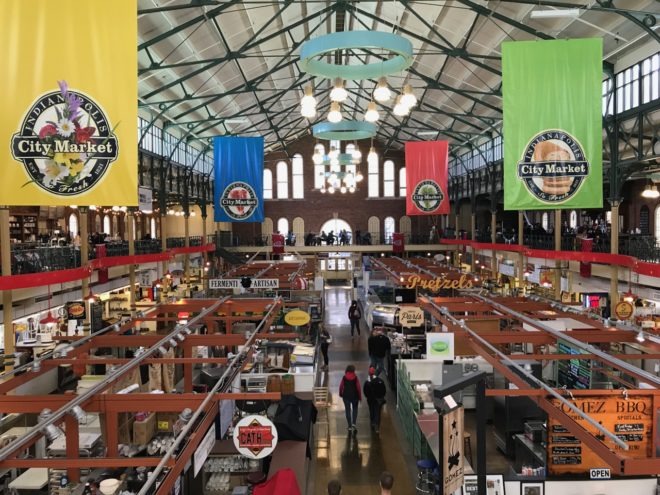 Afterwards we headed back toward downtown to check out the Indianapolis City Market. The beautiful old space is reminiscent of our favorite markets like North Market in Columbus, West Side Market in Indianapolis, and Findlay Market in Cincinnati. There are several aisles of food vendors covering almost every type of cuisine. Upstairs you’ll find plenty of seating, plus a coffee shop and a small taproom. We were surprised by the slower crowds on a Saturday, and the fact that several vendors were closed up for the day; one of the vendors told us the market primarily serves the weekday lunch crowd, more like a food court. 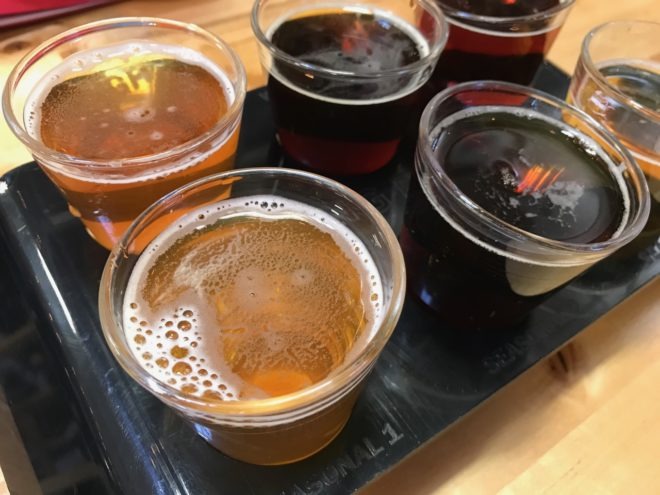 Following market snacks, it was off to Sun King Brewery to relax with a couple brews and some games. Indianapolis’ beer scene seems to be as diverse and growing as any city’s, and Sun King is clearly one of the bigger names in the business. 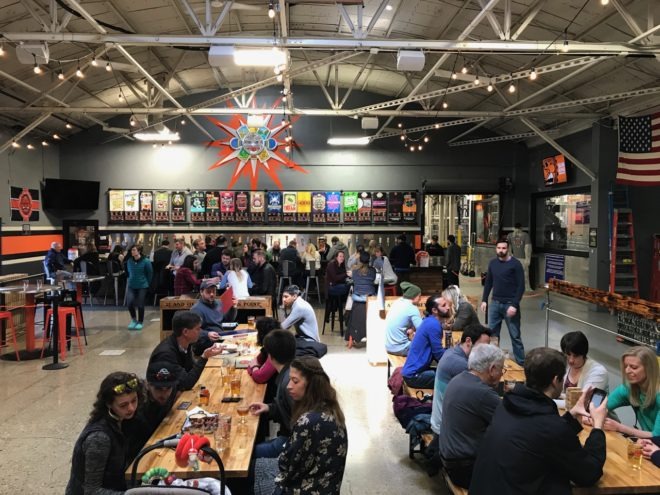 Sun King is the very epitome of the modern taproom. Big, long spaces filled with tables, shelves of board games to play, open views into the production brewery, great snacks on hand. The place was hopping when we arrived. 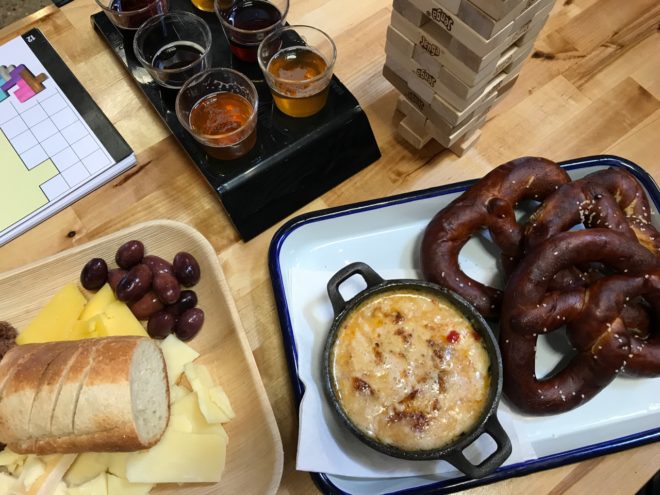 They include a little cheese and charcuterie stall inside the taproom, so you can order cheese plates, house-made sausages, non-alcoholic drinks, and other snacks. We spent time creating Jenga towers, coloring, and playing other games. The place is very family friendly (within appropriate hours, of course). 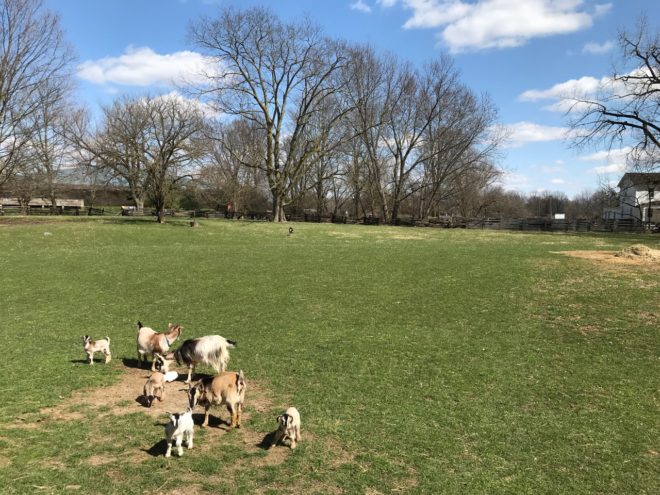 And then we were off from the city and into the country! Our afternoon activity was visiting Conner Prairie, a living history museum in Fishers, Indiana, just north of the city. We hung out there until the center closed, and we wished we could have had more time. We’re most certainly heading back then next time we visit. 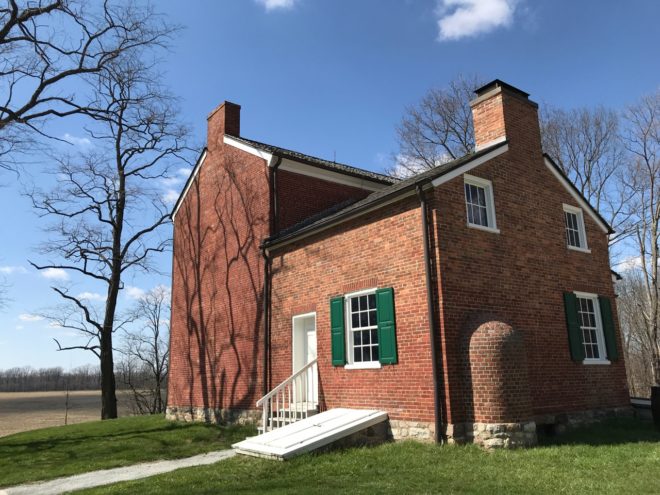 The center is built around the Conner homestead, one of the first brick homes built in Indiana in the 1830s. 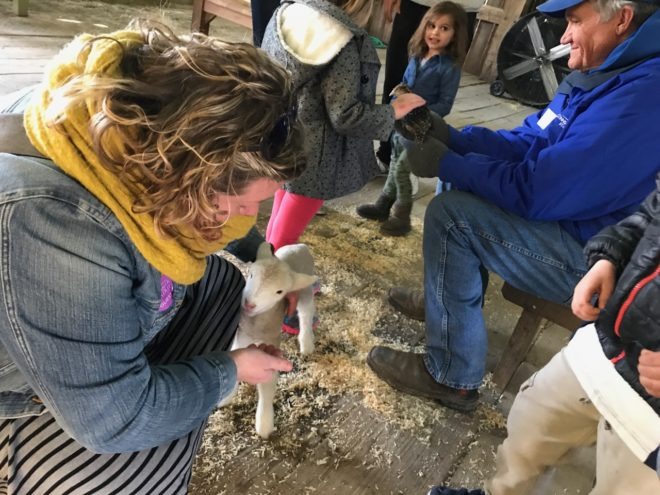 You’ll find multiple sections to Conner Prairie. There are barns where you can get face to face with sheep, goats, and different fowl. 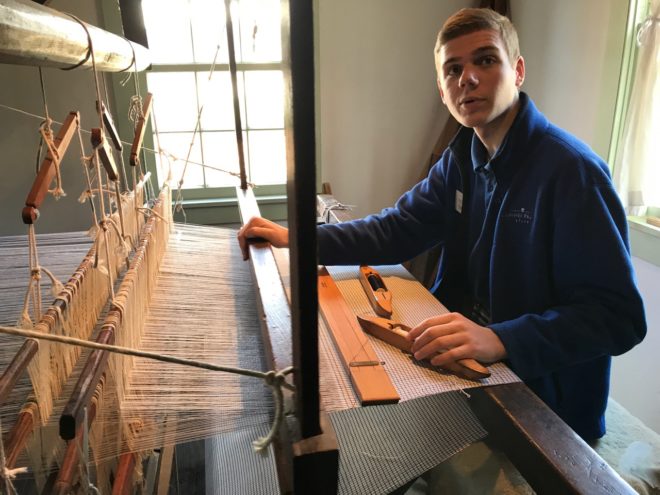 There’s an 1836 Prairietown, where you can wander building to building to meet the craftsmen. We spent some time learning about weaving. 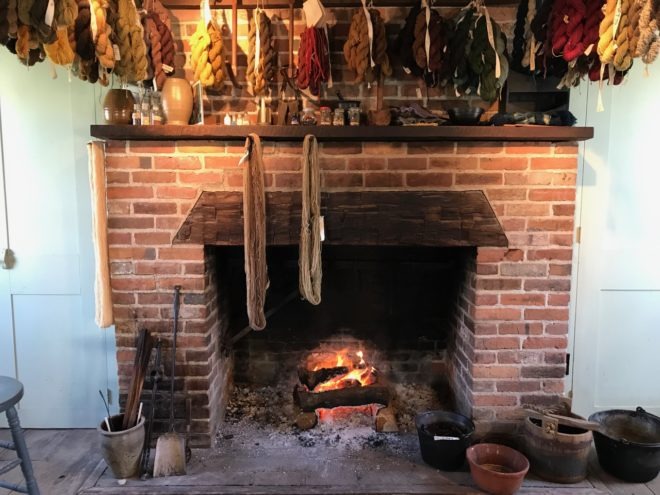 It was still a chilly day, so it felt warm and cozy to stop in the little houses and warm up by the wood fires. 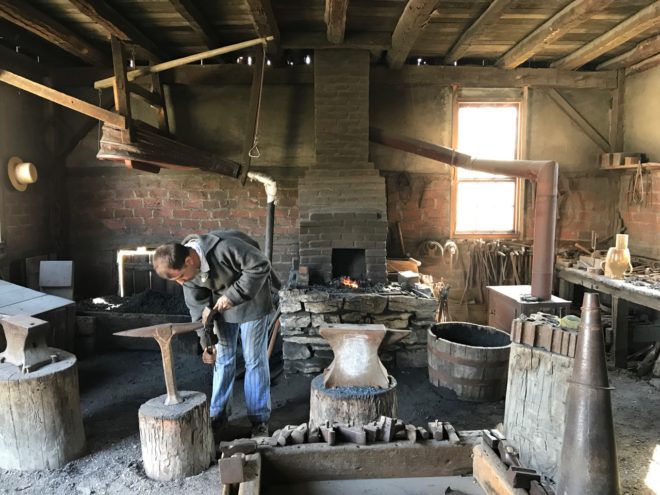 We stopped in a school and chatted with the teacher. We watched a blacksmith hammering out hooks. It’s a wonderfully immersive experience. And there’s even more than we could see in one visit, like a Native American camp and a replica 1863 Civil War section. 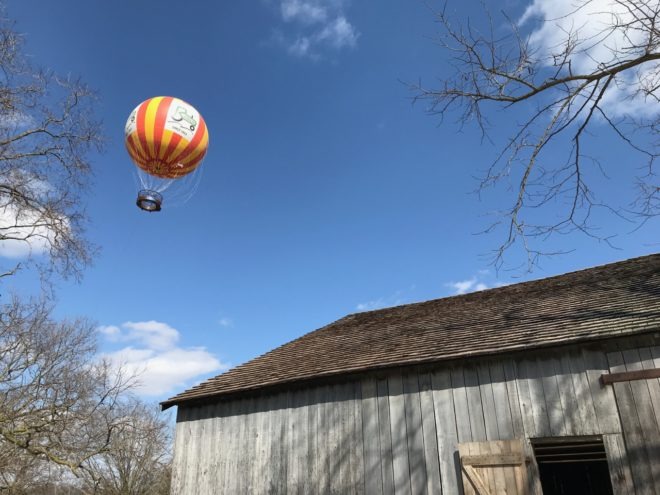 One of Conner Prairie’s signature attractions is the 1859 Balloon Voyage. You can add on a balloon ride to your admission.

They don’t fly in all weather, though. That day it was pretty breezy. They warned us ahead of time that they might not take passengers up; we watched them perform a test flight, and after seeing the balloon swing back and forth on its tether in the gusts, we agreed that it might not be best that day. Still, it was fun to see it flying in the clear blue skies. 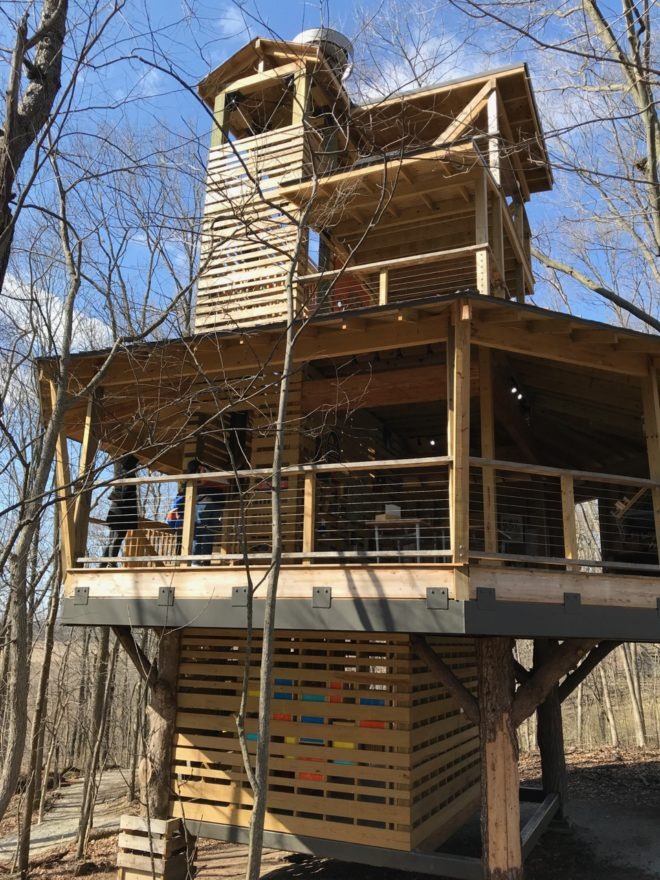 We finished our visit at the Treetop Outpost, a three-story treehouse that lets the kids run and play to their heart’s content.

We stayed until the park closed down for the day, then hopped in our van to go to dinner at Traders Point Creamery!

Disclaimer: this trip was hosted by Visit Indy. Photos and opinions are our own.