Back to Chicago – Part 1 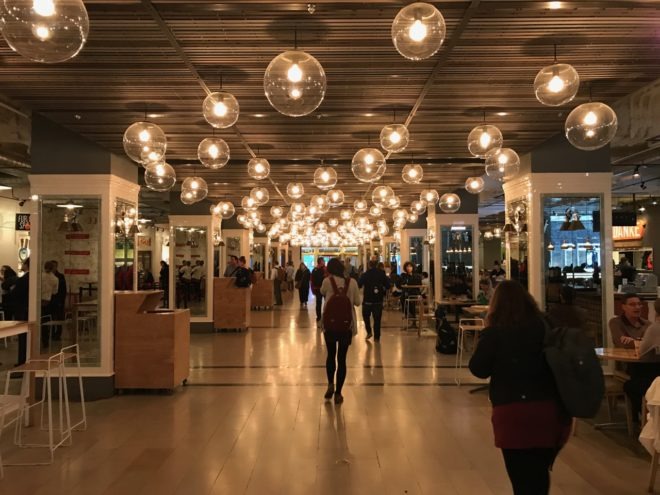 Last October we re-connected with Chicago, a city I grew up visiting frequently. It had been too long since we last traveled there, so we spent a long weekend checking out restaurants in the West Loop, discovering donuts, seeing Hamilton, exploring parks. Read all about our discoveries here, here, and here.

In May we had a planned trip for a cousin’s wedding, so we decided to make a full family trip out of it (jump ahead to parts two or three). Last fall, we had the good fortune of snagging tickets to see Hamilton, and about a week before this trip, we casually checked the availability of seats. Lo and behold, we found four relatively inexpensive tickets for the Thursday night performance! Our boys love the music, and we were excited to take them to it.

Of course, we needed dinner before the show, and we scored a success finding the Revival Food Hall a couple blocks from the CIBC Theatre. 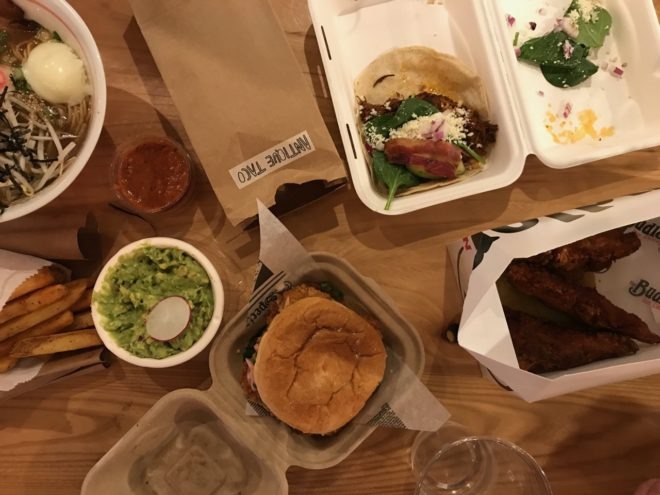 The food hall concept is one of the more popular trends recently. In Columbus, the Short North Food Hall just opened and the Budd Dairy Food Hall is on the way. Revival Food Hall takes up 24,000 square foot on the ground level floor of building dating back to 1907. It features a collection of 16 different vendors serving everything from tacos to pizza to barbecue to gelato to seafood and more. There’s also a coffee shop and a bar. If you’re traveling with a group (especially one including kids), it’s the ideal situation: a casual vibe, wide range of choices, easy access to drinks, restrooms, plenty of seating. We feasted on fried chicken, tacos, fried fish sandwiches, and ramen. 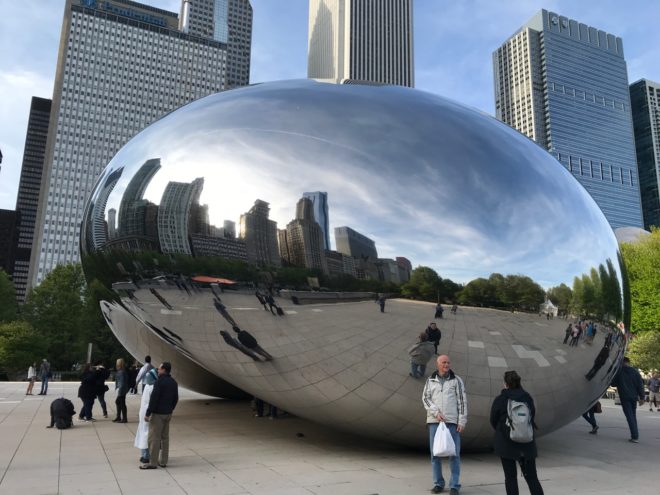 We had time to kill before the show, so after dinner we strolled east to Millennium Park to give the boys their first glimpse of a Chicago icon: The Bean. Formally known as the Cloud Gate, The Bean is a fun gathering point for tourists. You can snap funny selfies in it, or catch beautiful views of the Chicago skyline in its reflection. 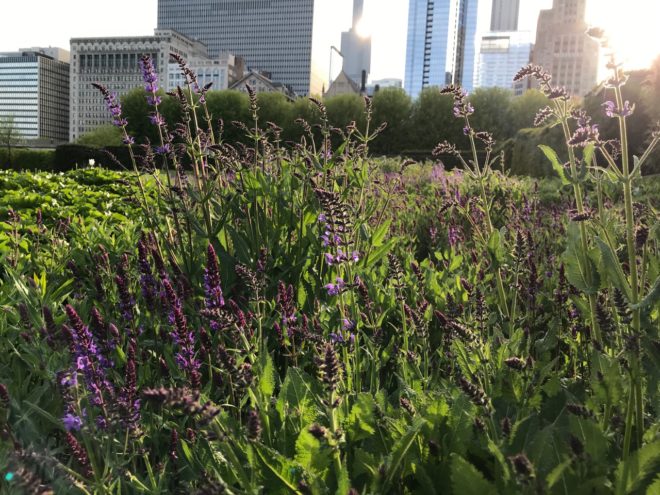 Then we took a walk through the Lurie Garden, next to the Art Institute. It’s a beautiful, all-season garden with stone paths through which you can wander. 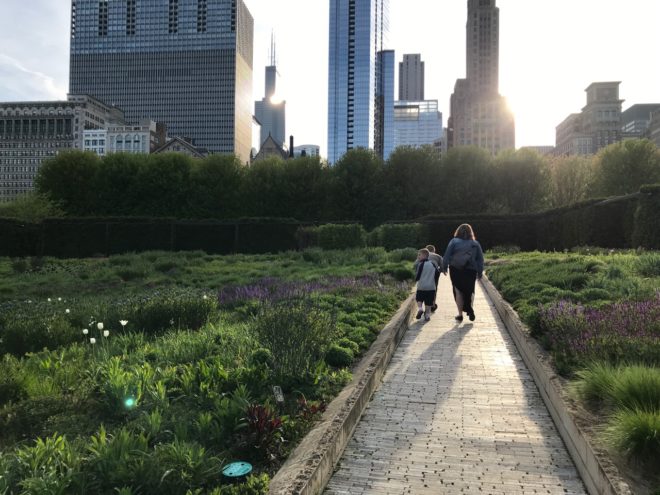 We’ve now visited it in the fall and spring, so it’s exciting to see the different plants as they grow. 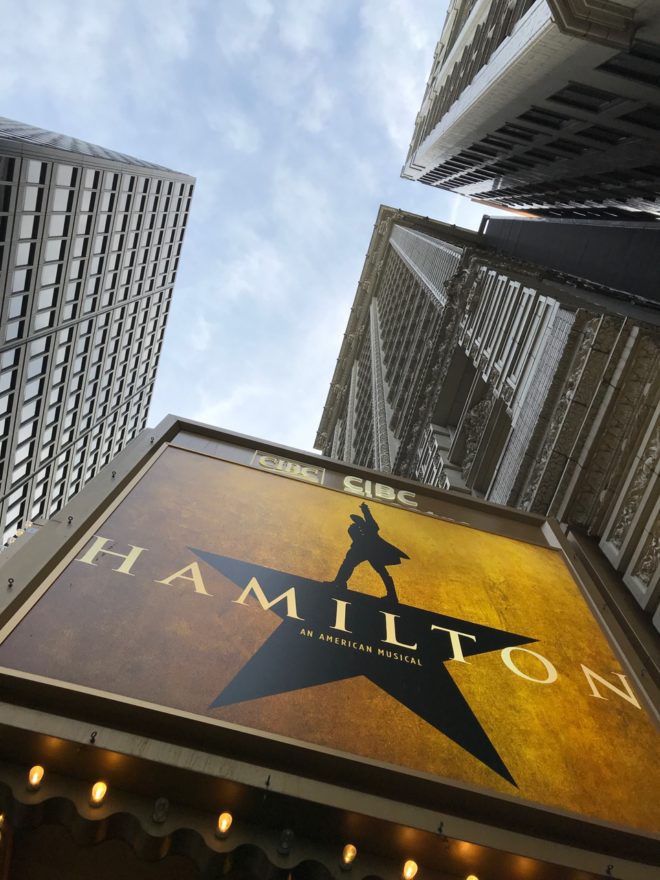 And then it was on to the show! 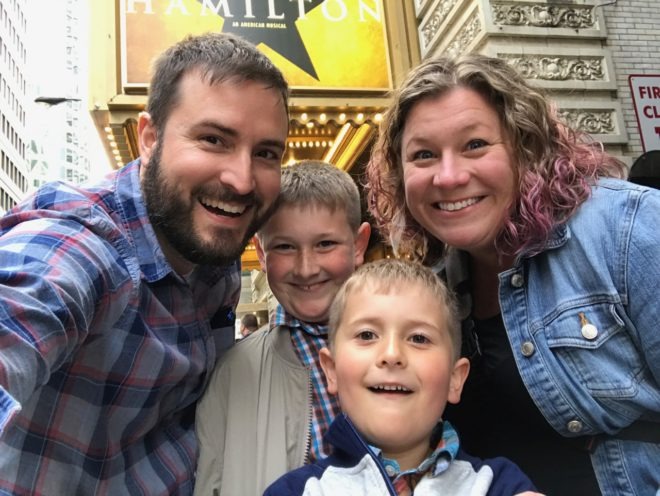 We were excited to take the boys to see Hamilton. They know the music quite well, and it’s hard to beat the spectacle of actually seeing it. 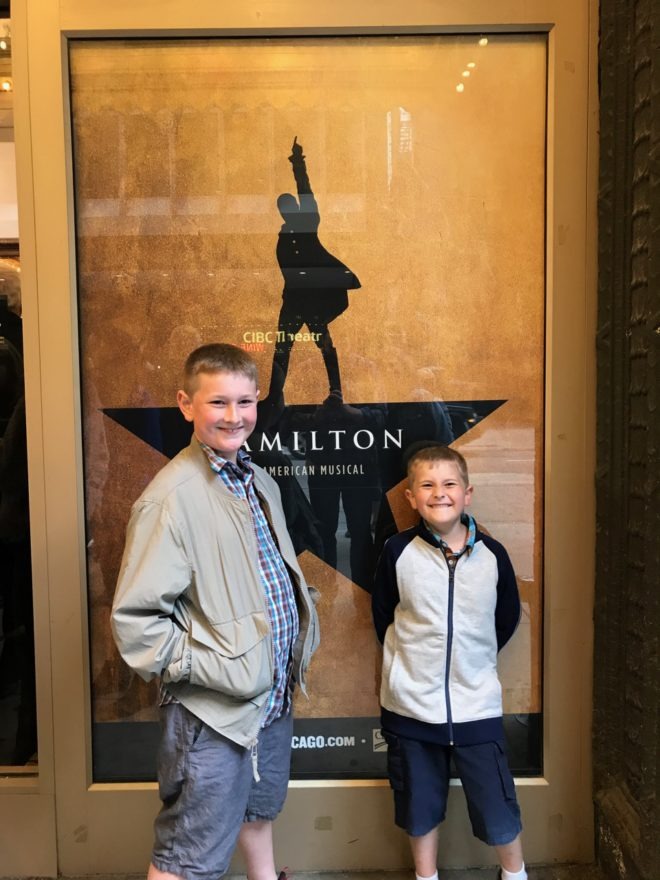 It’s a long show, and the late evening was pushing it for our youngest, but overall the boys kept with it. The musical numbers are big and fun, and there are plenty of funny moments you don’t get from just listening to the soundtrack. 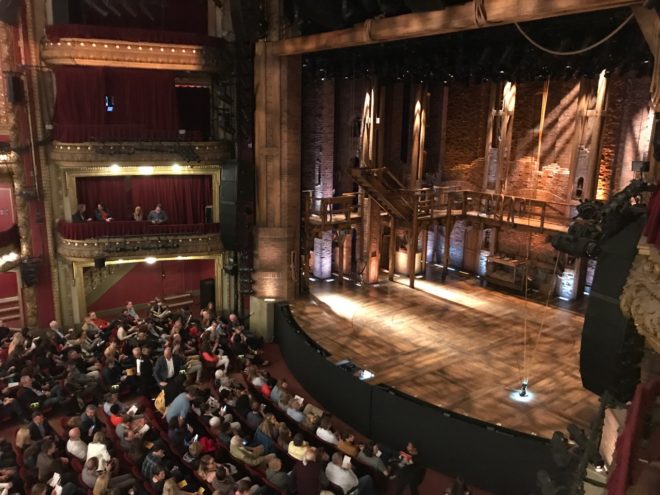 When Hamilton was playing only on Broadway, tickets were more scarce (especially with the original cast), but with the addition of productions in Chicago, LA, and London plus multiple touring casts, it’s getting easier to see the show. (P.S. It’s coming to Columbus in January 2019!) 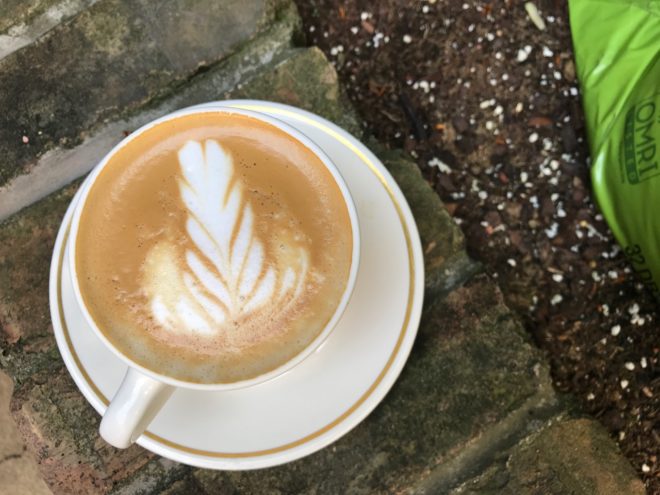 The next morning we awoke in our West Town AirBnB and strolled a block to Sip Coffee House, a lovely local spot serving coffee and snacks. It looks small from the outside, but it extends far back into the building, and includes a small patio space. We can attest to the quality of the cortados. 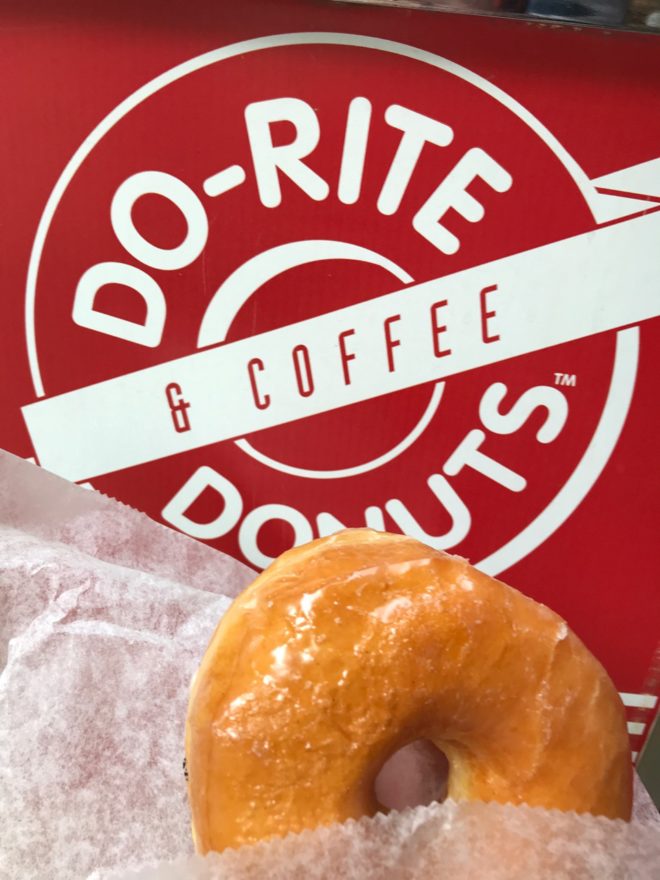 After we started with coffee and a snack, we hopped the train into downtown. It was Owen’s (our train-loving six-year-old) first time on a subway, so he was beyond excited for the experience. We took it into the Loop and found our way to second breakfast: Do-Rite Donuts. 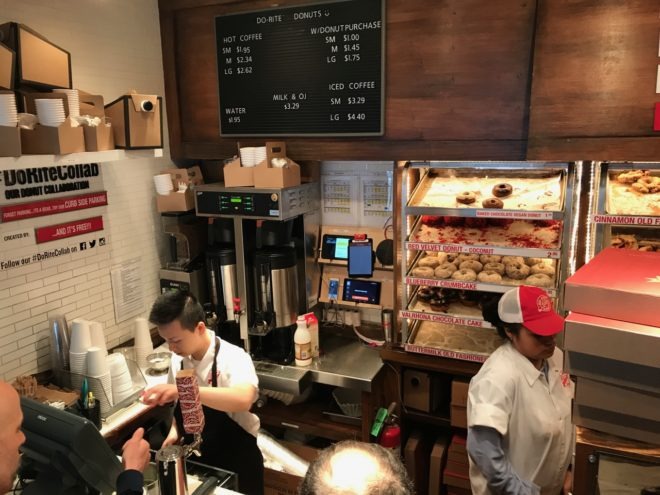 We first discovered Do-Rite’s West Loop location on our last trip. The West Loop and Streeterville locations serve up donuts and fried chicken. This downtown location is smaller and focuses just on donuts and coffee, open daily until 2 p.m. 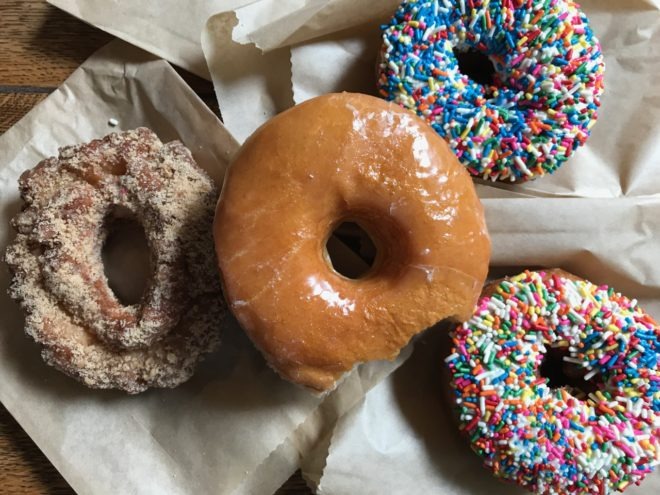 We assembled a small collection of pastries – I’m a fan of the cinnamon old fashioned in particular – then grabbed a table out front (there’s no seating inside). 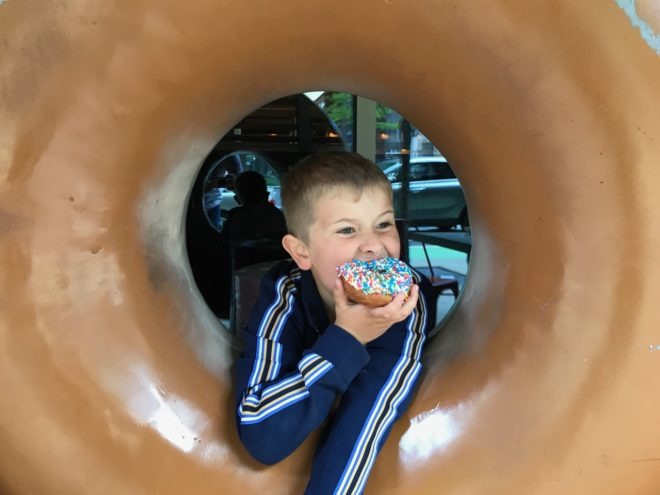 The Do-Rite locations are easy to spot; just look for giant donut out front!

And then it was on to our next adventures: the Art Institute of Chicago… and maybe the boys’ introduction to Shake Shack. Read on to part two or skip ahead to part three!