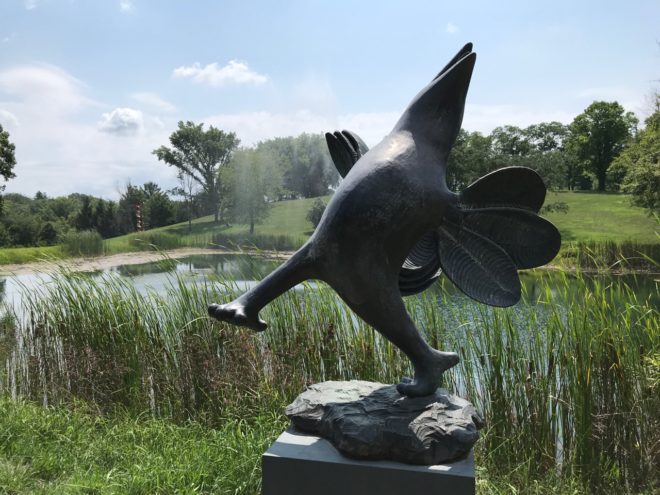 In early August we trekked for the third time to Butler County, Ohio, a place we’ve gotten to know and love through weekend trips exploring their Donut Trail (which has now been featured in Food & Wine!), plus the surrounding parks, breweries, restaurants, and galleries.

Part one of our recent weekend took us to dinner at Taqueria Guanajuato, a movie at the Holiday Auto Theatre drive-in, a couple Donut Trail stops, and a deli in Hamilton. At the deli we packed sandwiches, snacks, and drinks and headed out to one of our favorite destinations in Butler County: Pyramid Hill Sculpture Park & Museum. It was one of the most surprising discoveries on our very first visit. Nearly 70 sculptures are installed in the rolling landscape, and in the center is a world-class museum hosting ancient works. 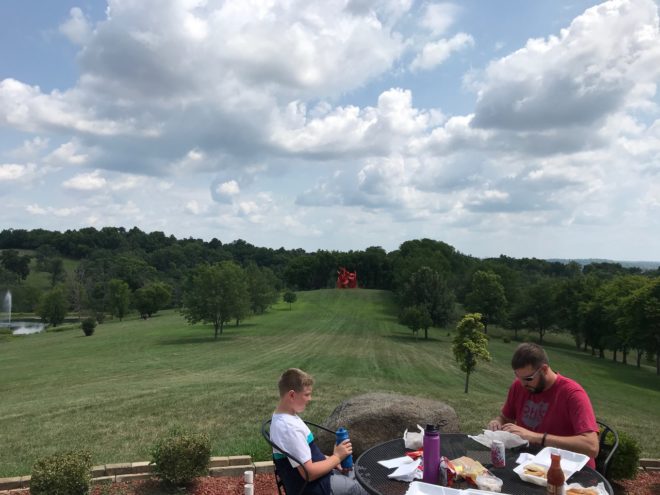 Our last two trips have been in March and November, respectively, when we rolled through Pyramid Hill amongst gray skies and blustery winds. This time it was fun to have warmer, brighter weather. The employee at the visitors center suggested a couple places to picnic, so we picked the highest point in the park and busted out our sandwiches. 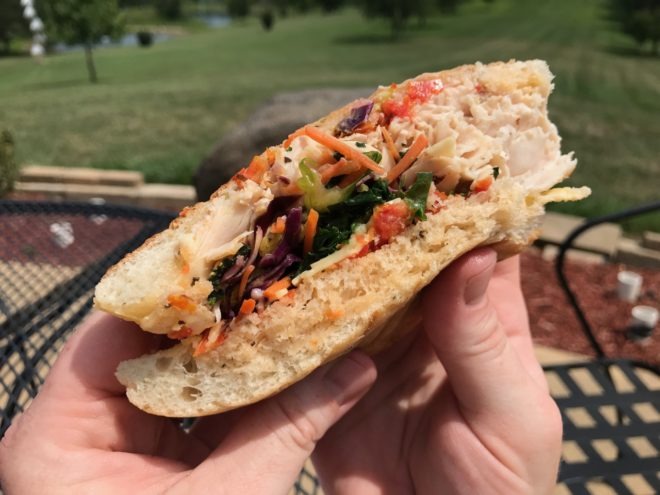 Kudos to Alexander’s Market & Deli in Hamilton. They’re located right across from the county courthouse, and produce some solid deli sandwiches. I enjoyed the Fogouda Boutit with turkey, smoked gouda, spinach, and roasted tomato jam on focaccia. It’s a perfect pairing with a golf cart ride and a hike through Pyramid Hill.

After lunch, we took the opportunity to explore some of the hiking trails in the park. The paths wind through the hills, but don’t stray too far off the primary trail. We saw birds, followed some hopping frogs, and watched a spider mend its web. 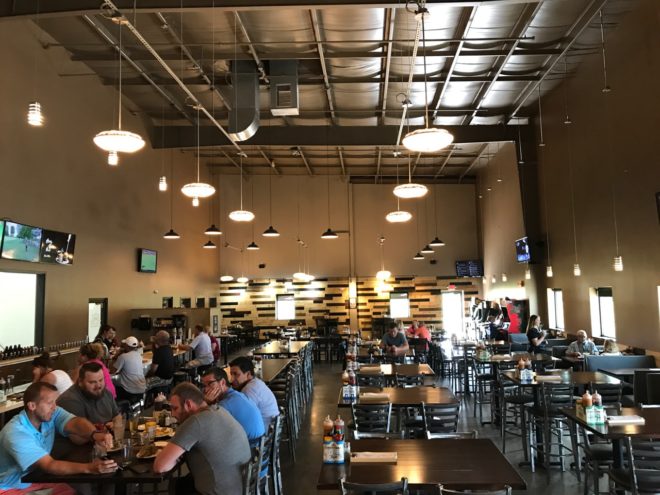 After hike through the park, we were ready for a cool down, so we snuck over to Rivertown Brewery & Barrel House just outside of Hamilton. 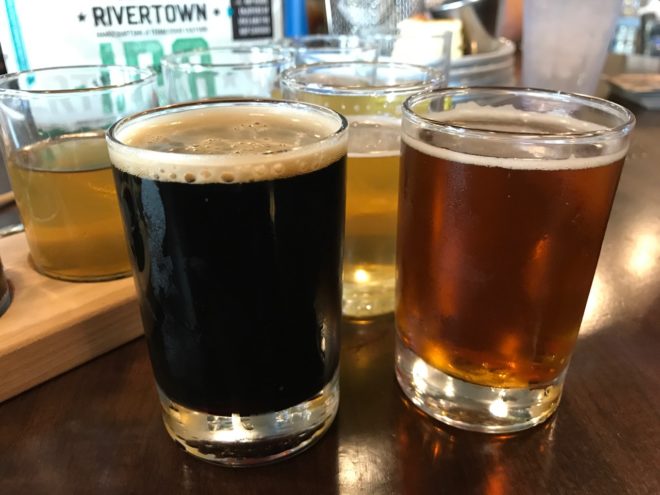 I’ve had some Rivertown brews in Columbus, and knew they were closer to Cincinnati, but didn’t realize they had moved recently into Butler County (Monroe, specifically). The move was prompted by a need for more space for the brewery, taproom, restaurant, barrel storage, and bottling lines, with the added bonus that water from the Hamilton aquifer is regularly named the best tasting water in the world. 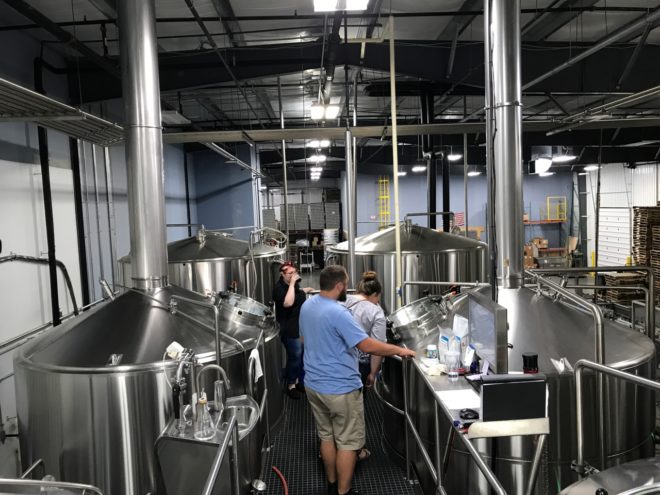 While Beth and the boys enjoyed snacks and arcade games in the giant restaurant, I hopped on a short tour of the brewery and barreling house. 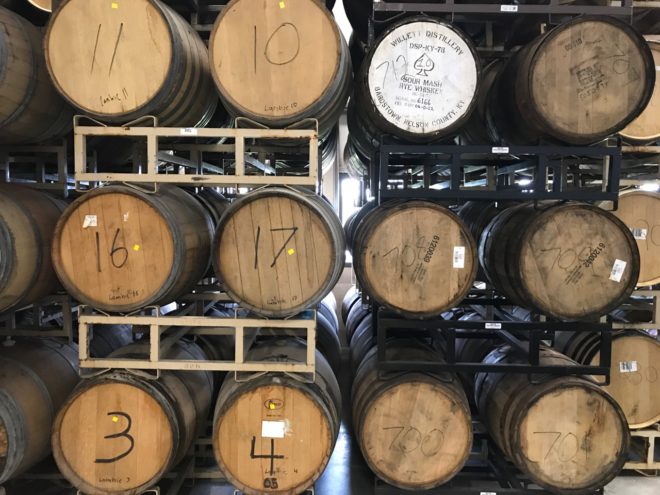 Rivertown was created by Jason Roeper, a homebrewer who won the Sam Adams Longshot Competition in 2007 with an Elderberry Lambic. He used that win to move forward with a full-scale brewery, and hasn’t looked back. 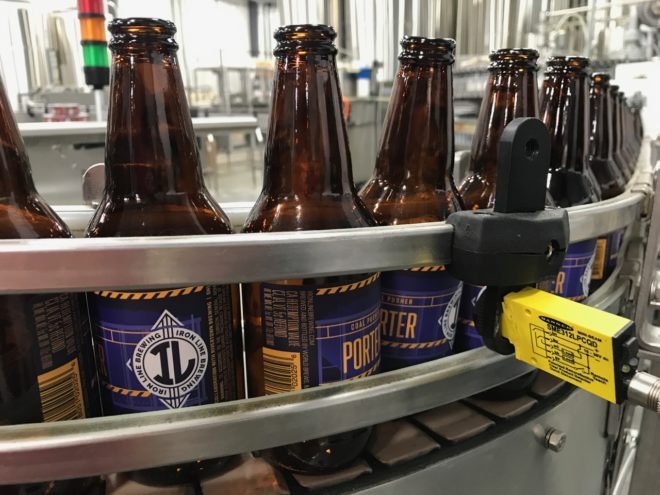 Their operation in Monroe is substantial. It feels a little off the beaten path in a light industrial park, but it’s accessible enough to draw regular crowds. The tour teaches the basics of brewing, and gives you a look at their barrel storage, brewery, and packaging lines. 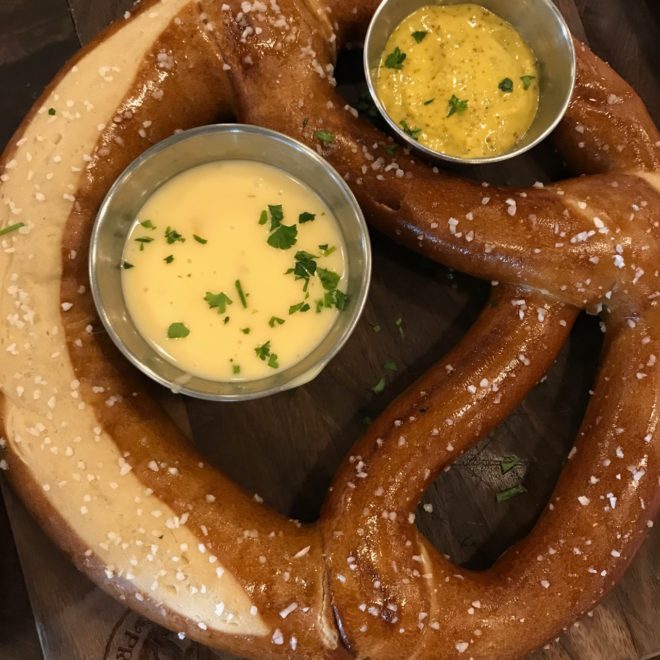 The restaurant is full-service, although we just snacked on chips and pretzels to go with our beers.

Rivertown also features a small gift shop with swag, and does a steady business of canned six-packs and single bottles. 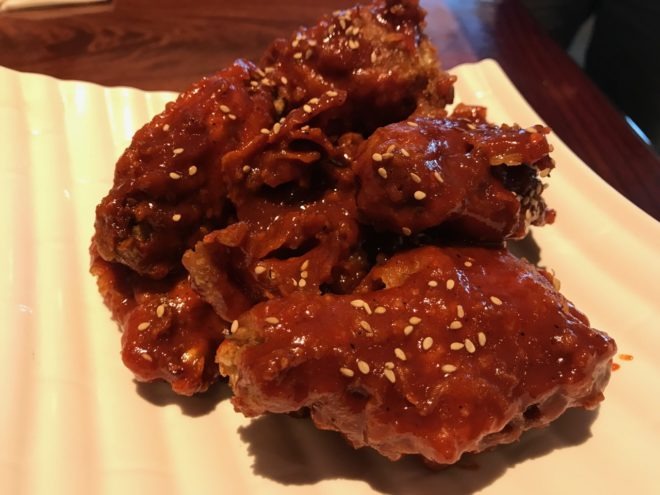 After the brewery, we relaxed at the hotel for a bit before heading out for dinner and dessert.

Dinner that evening was another wonderful strip mall find: Korealistic. 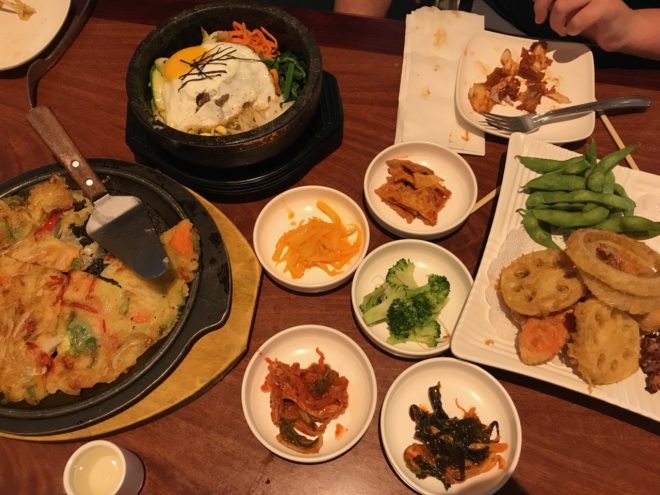 The boys aren’t as familiar with Korean cuisine, so it took a little introduction on our part, but soon our table was filled with plates large and small. We started with Korean fried chicken wings. 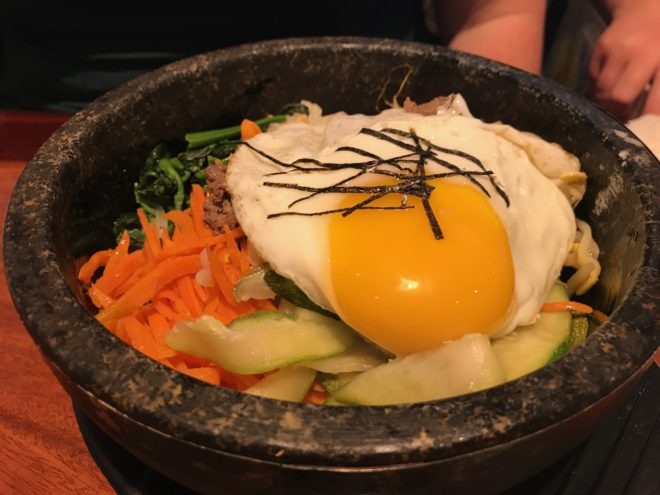 And dug into a delicious rendition of dolsot bibimbap, a mixed rice dish served in a hot stone bowl that continues to crisp up the ingredients as you eat. It’s loaded with vegetables and an over easy egg. 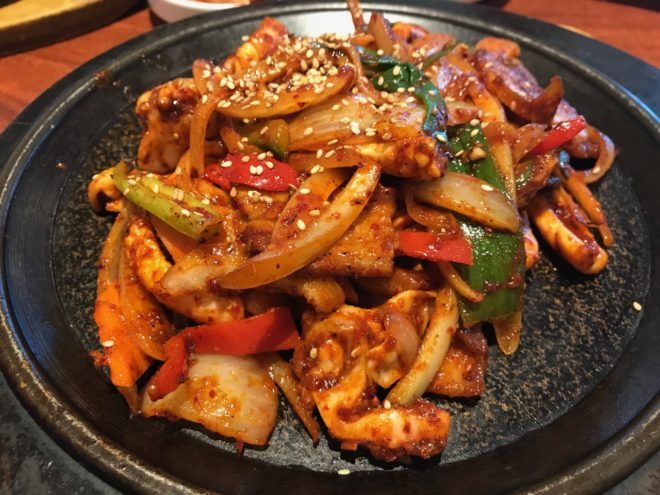 We took the suggestion of our server and ordered the ohsam bulgogi, a mixture of stir-fried pork belly and calamari with mushrooms, onions, peppers, and scallions. It packed a serious kick, and I’d order it again in a heartbeat. 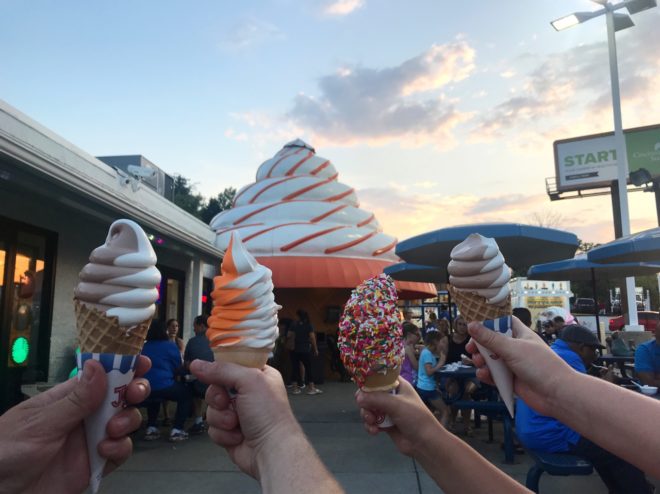 Following a rich and spicy dinner at Korealistic, a little soft serve seemed in order, so we found ourselves at The Cone in West Chester.

In addition to serving wonderful soft serve, The Cone is a great little marker of the West Chester community. You see, every community has these little gathering points, these family-owned businesses where generations of residents have visited. It can be almost any type of business, although it often involves accessible comfort foods: a hot dog joint, an ice cream spot, a pizza place. 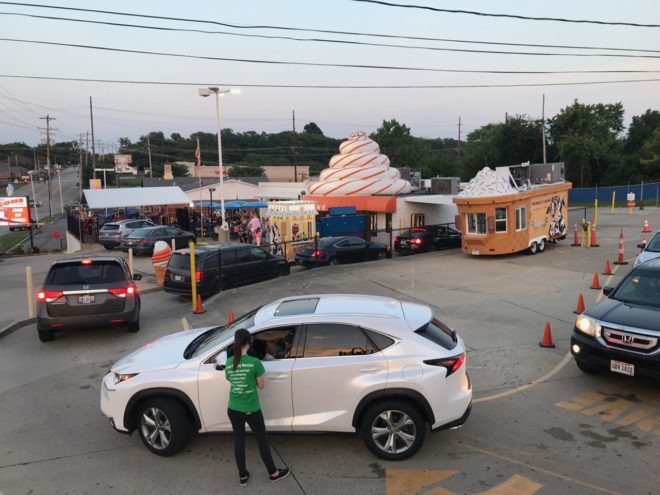 Getting to visit one of these places, and being able to spy out how it’s grown over the years – expanded buildings, tightly organized drive-through lines, more games for kids – let’s you connect with area history. We can all think of places like The Cone that we’ve gone to since we were kids, and will take our own kids there someday.

Suffice it to say: the soft serve was excellent, and it was a perfect finish to the day. 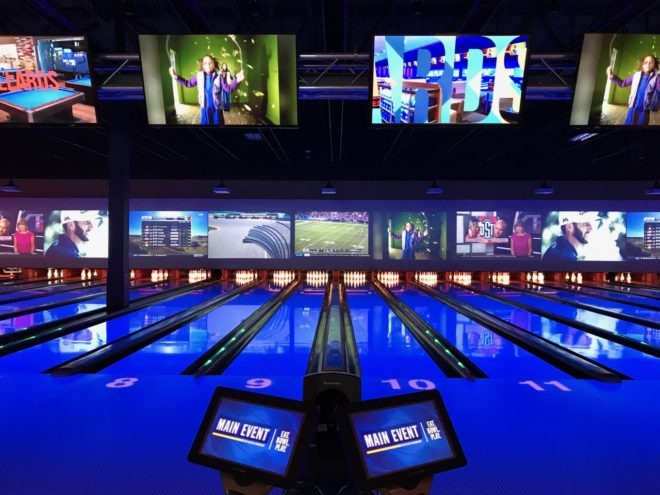 Our final morning we enjoyed breakfast at the Staybridge Suites, then made one last stop in West Chester: Main Event Entertainment. 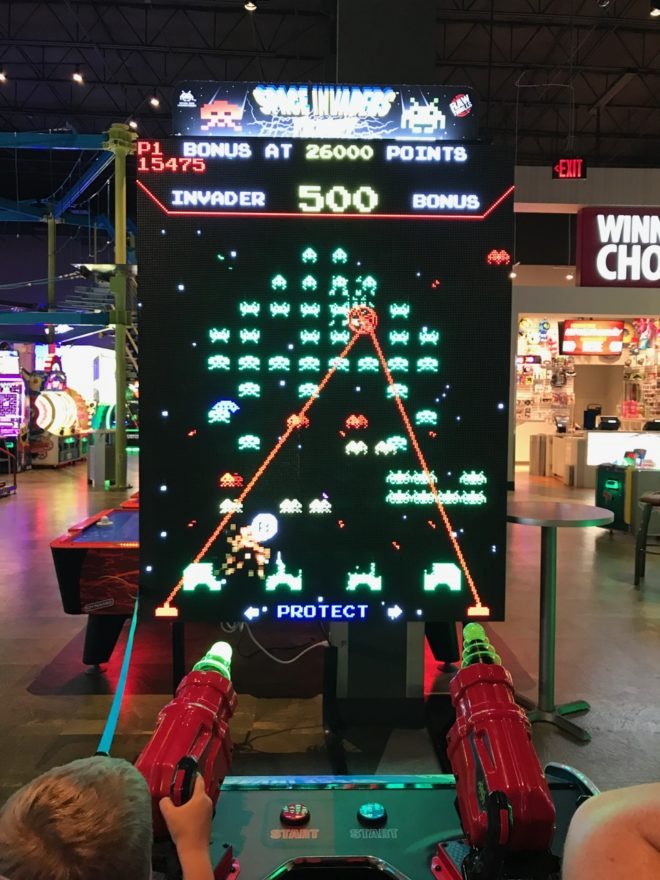 Main Event is one of those giant entertainment centers with bowling, video games, climbing walls, laser tag, you name it. We let the boys play a variety of games, and I was amazed at how… well, BIG so many of these games are. I’m starting to show my age when I find myself saying things like, “Back in my day, arcade games didn’t have surround sound!” 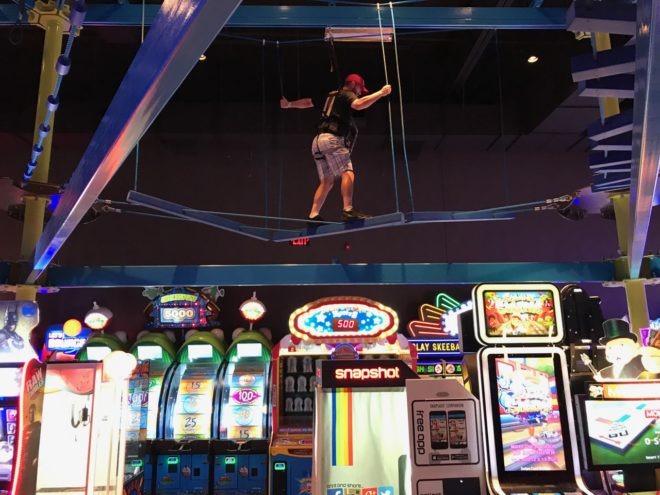 Main Event also makes use of its vertical space with a gravity ropes course above the gaming area. So in between games you can watch other guests climbing around over your head. 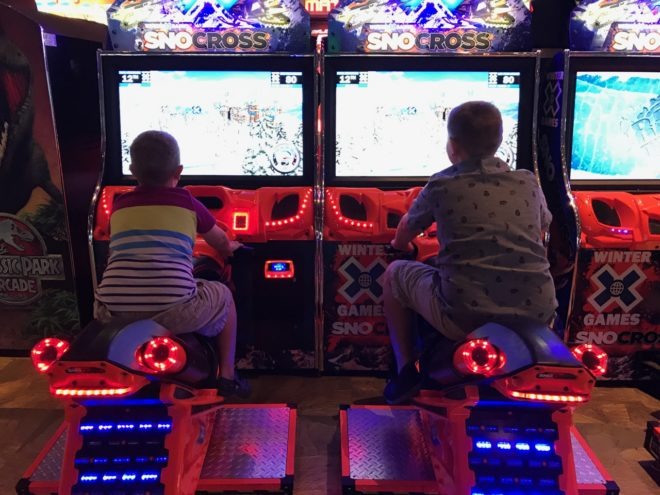 The boys are big fans of any games that involve riding or driving. 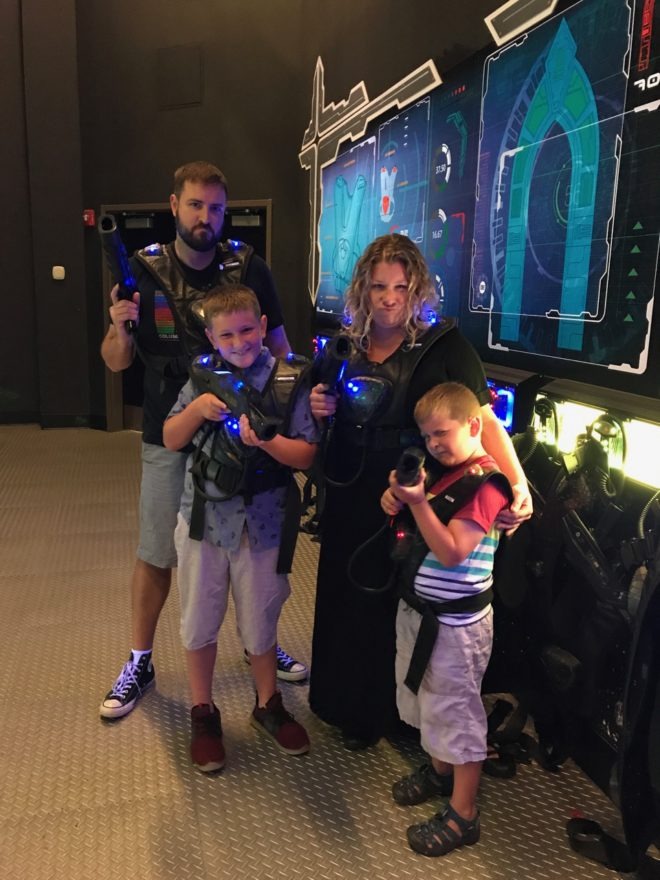 We finished the day in style, with an awesome round of laser tag. We fell in love with it on our last visit to Butler County, when we played at the WEB Extreme Entertainment also in West Chester.

All in all, another wonderful visit to Butler County. The region is filled with unexpected finds, both new and old, and will sure keep us returning for years to come.

ACCOMMODATIONS, FOOD, AND ADMISSION WERE PROVIDED BY THE BUTLER COUNTY CVB. PHOTOS AND OPINIONS ARE OUR OWN.