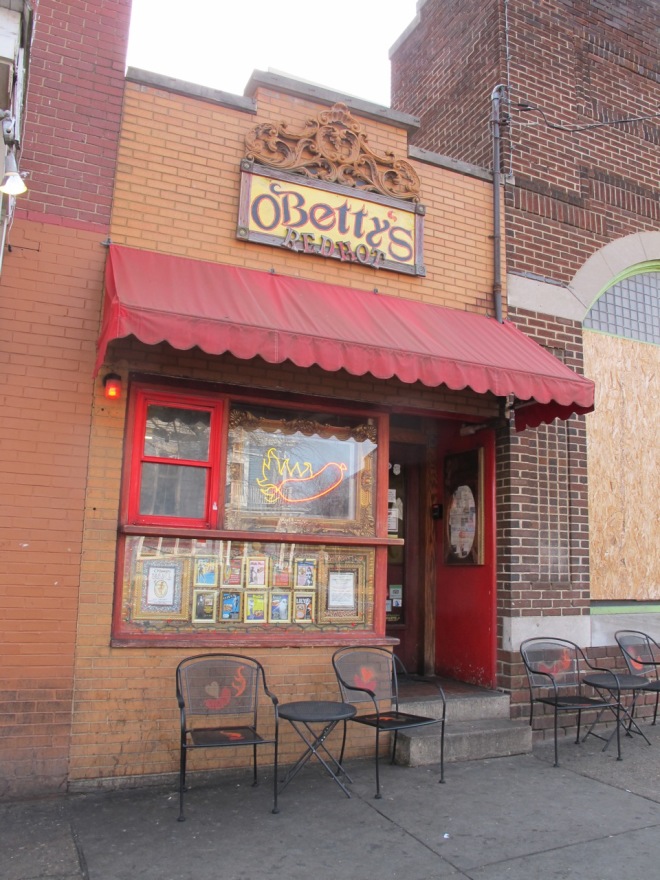 (Quick note: the day after we visited Athens, a stretch of Union Street caught fire, and multiple businesses were damaged or destroyed and numerous residents were displaced. A number of fundraisers are under way to support the businesses, their employees, and the residents. Consider donating to the gofundme campaign or purchasing a Traxler Tee or buying some Jackie O’s beer to support the community.)

Last week I posted about the first part of our trip to Athens, Ohio. We were hosted by the folks from the Athens County Visitors Bureau, and our whirlwind day gave us a good preview of the region’s offerings. After breakfast, coffee, a brewery tour, and a romp in the park – believe it or not, we were hungry for lunch. From my list of must-visits from my OU grad friends, we knew a stop at O’Betty’s Red Hot. O’Betty’s is that classic hot dog joint. Every city has one (like my hometown’s Yesterdog). They’re old, they’re loaded with paraphernalia, and they serve cheap and tasty hot dogs. 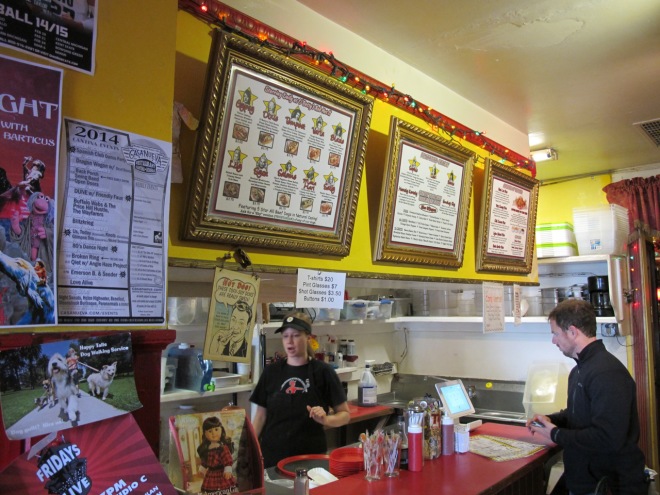 Pass through the narrow storefront of O’Betty’s and you’re standing in the even narrower main hallway. There you order from the menus on the wall, looking right into the kitchen where they whip together your dogs. The back of the restaurant is a couple small rooms; the furthest back one also hosts the Hot Dog Museum. The glass cabinets are loaded with all sorts of hot dog-related memorabilia, from old advertisements to hot dog cooking devices. 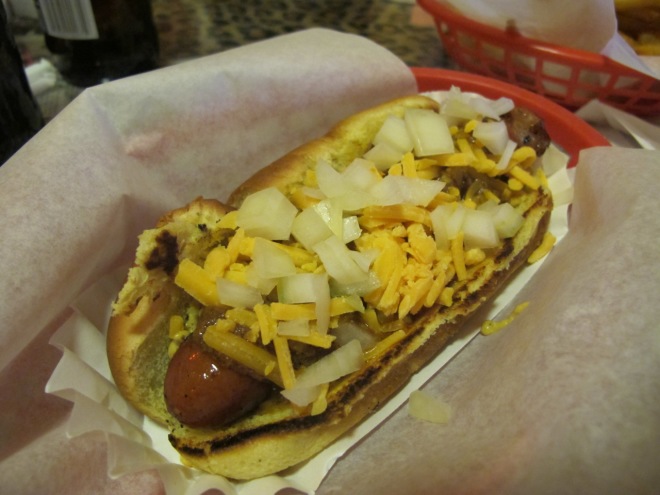 The hot dogs themselves are named like pinup girls. I ordered the Dixie, with homemade chili sauce, diced onions, stadium mustard, and cheddar. It pairs pretty nicely with some fresh cut fries. 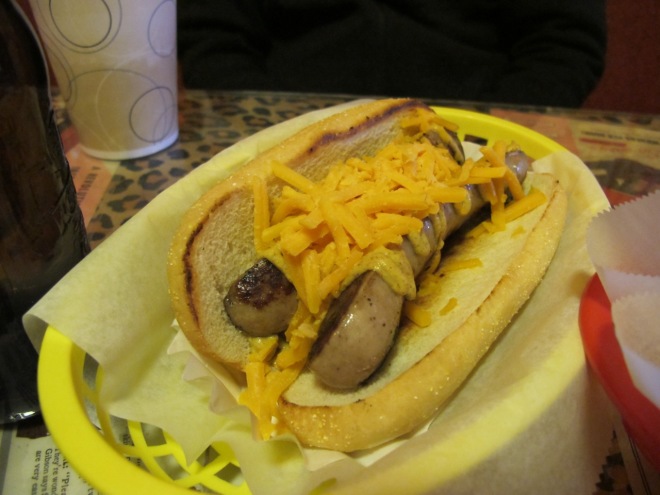 None of the hot dogs are very complicated, but this type of comfort food is fun for any time of day (especially very late into the night when you’re partying with friends, I’m told). 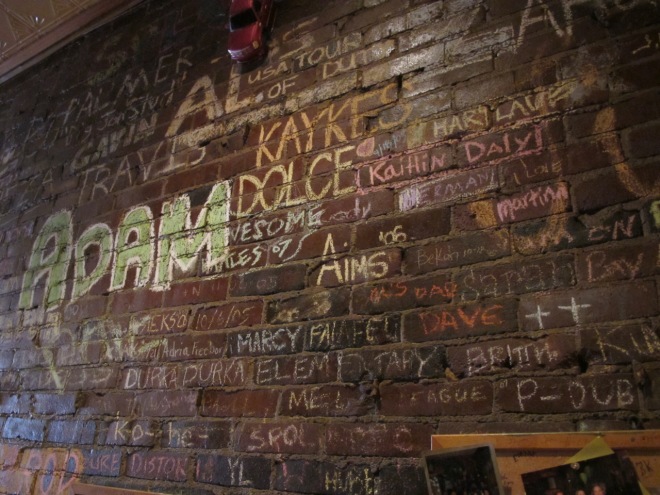 After lunch we strolled more of the main streets of Athens, especially Court and Union streets. We peeked into a number of shops, including a look at the brick-walled Bagel Street Deli. 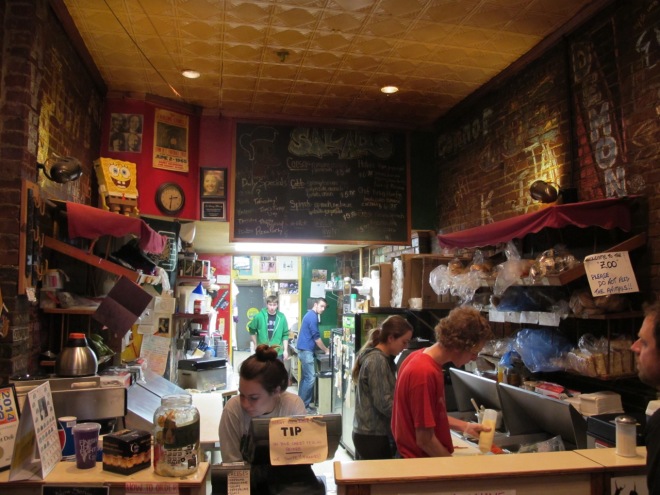 We’ll most certainly be eating at Bagel Street the next time we’re in town. Bagel Street is owned by Art Oestrike from Jackie O’s Brewery (we got to meet him earlier in the day). The deli features a huge list of bagel sandwiches, from breakfast and lunch varieties to vegetarian and carnivorous versions. 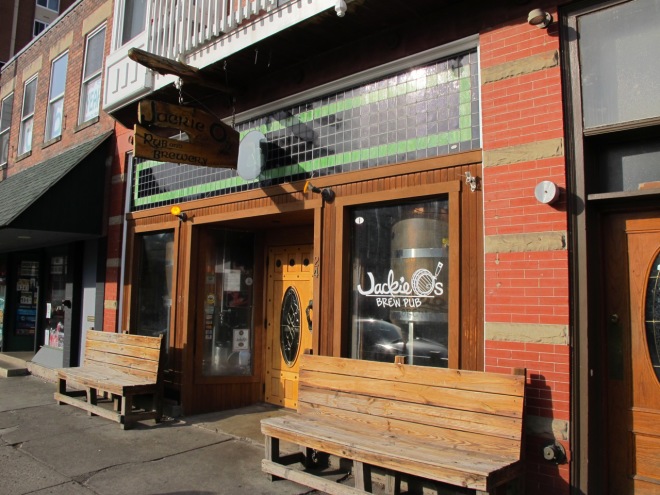 We strolled over to Jackie O’s Brew Pub and Public House, too. Our guide took us through the space and into both buildings (which were partially damaged by the fire the day after we visited). The two buildings were purchased by Art Oestrike and combined into one. The old brewery equipment is on the Brew Pub side, while the Public House is a full restaurant. The two are joined by a giant patio in the back. 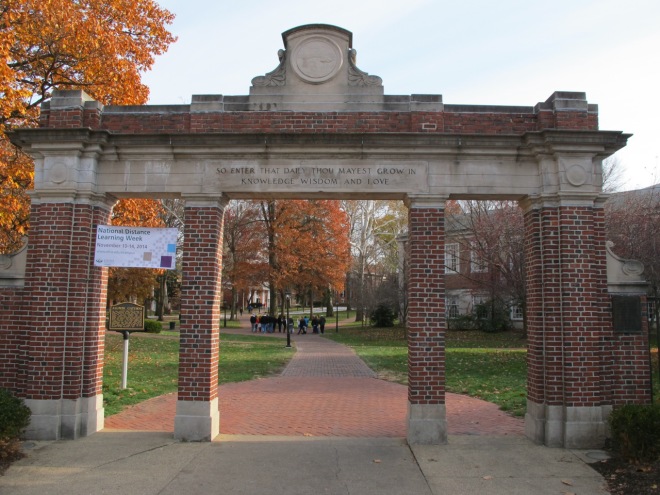 We had driven around Ohio University’s campus earlier, but while walking off breakfast and lunch we delved into campus on foot. 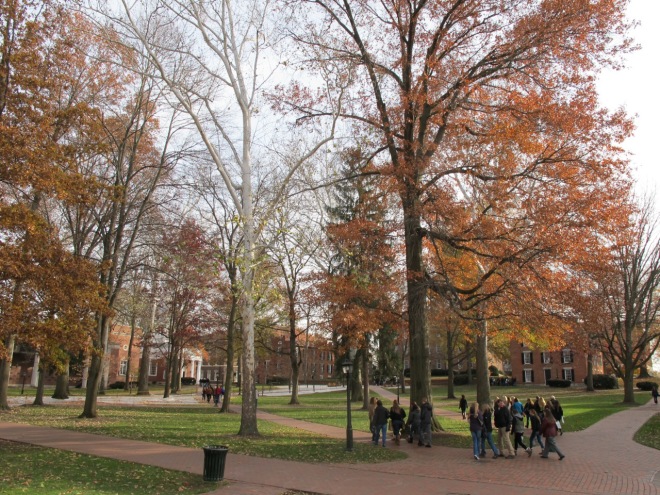 The perfect weather + a picturesque campus is an easy sell. 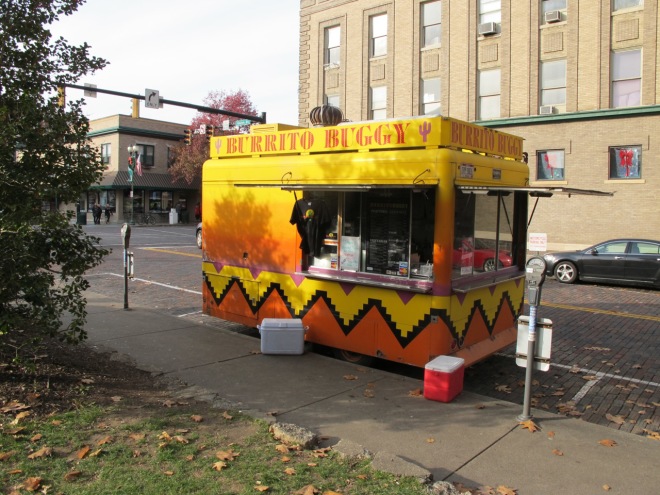 Parked along campus is the famous Burrito Buggy. We were too full to down burritos, but we’ll catch it sometime either in Athens or during their occasional trips to Columbus. 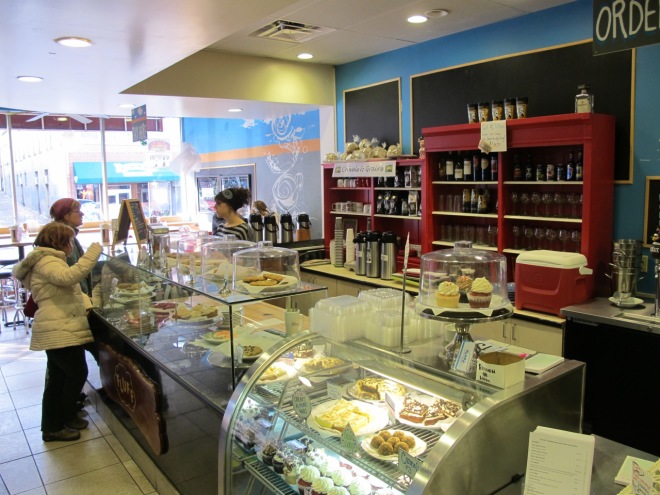 Of course, we could always make room for some coffee and sweets. Our guide Jake was eager to take us to Fluff Bakery on Court Street, and it didn’t take long to see why. They’re doing everything right when it comes to baked goods. 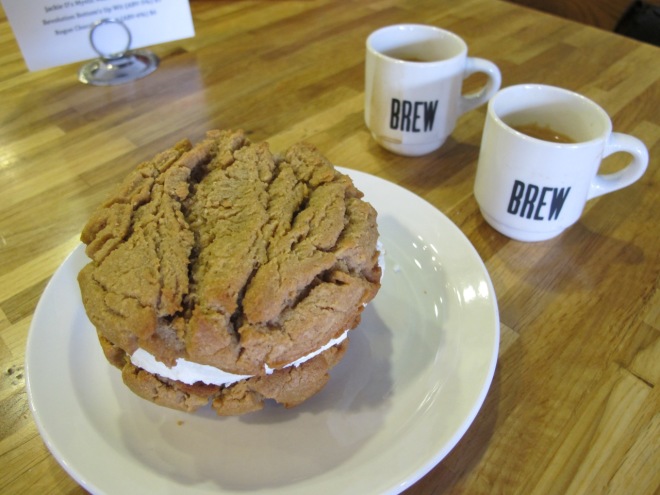 We split a monstrous cookie sammy with peanut butters (plus a couple espressos to off-set the impending sugar crash). 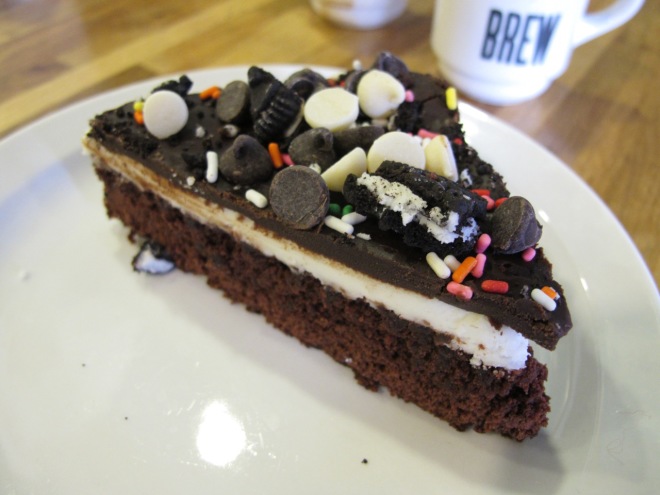 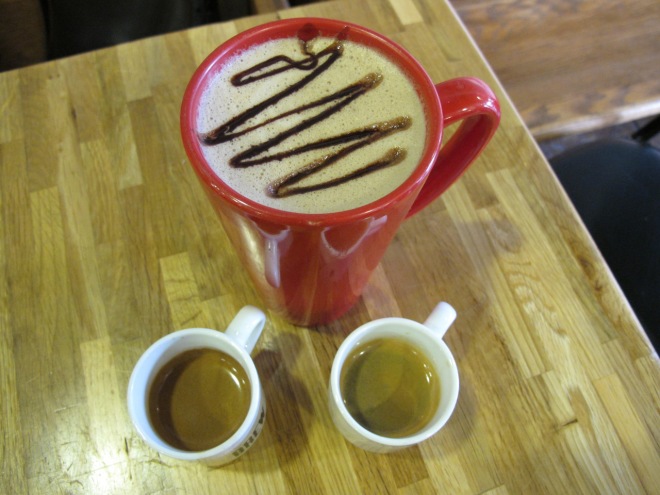 The espresso and a mocha were a fitting end to the day. A last little bit of energy for the drive home.

All in all, it was a more than satisfying day in Athens. It’s easy to see why OU grads and Athens natives alike are passionate about their town. It’s a curious and delightful combination of the fun college town mentality with a strong local movement toward responsible and creative culinary practices. Add to that the surrounding natural landscape, and you have a clear sense of community pride.

(This trip was provided for and hosted by the Athens County Visitors Bureau. Opinions are my own.)