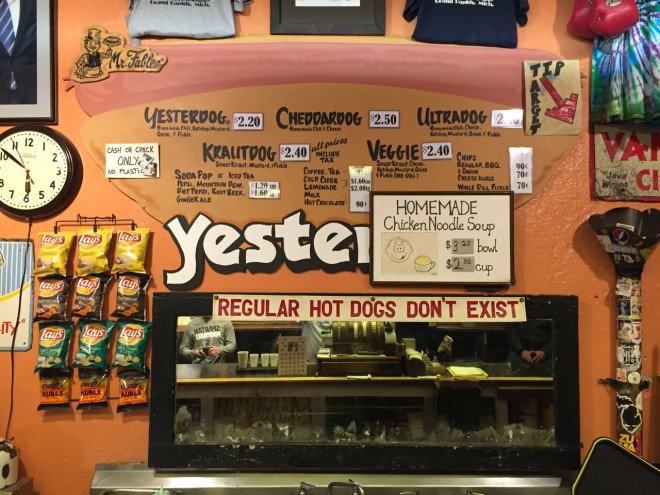 We made a recent trip to my hometown of Grand Rapids, and as usual we made the culinary tour of our favorite stops. Even with our first night’s arrival we found ourselves at Yesterdog, my favorite hometown hot dog joint. It’s steamy and a little stinky inside, the booths are carved up, the service often surly… 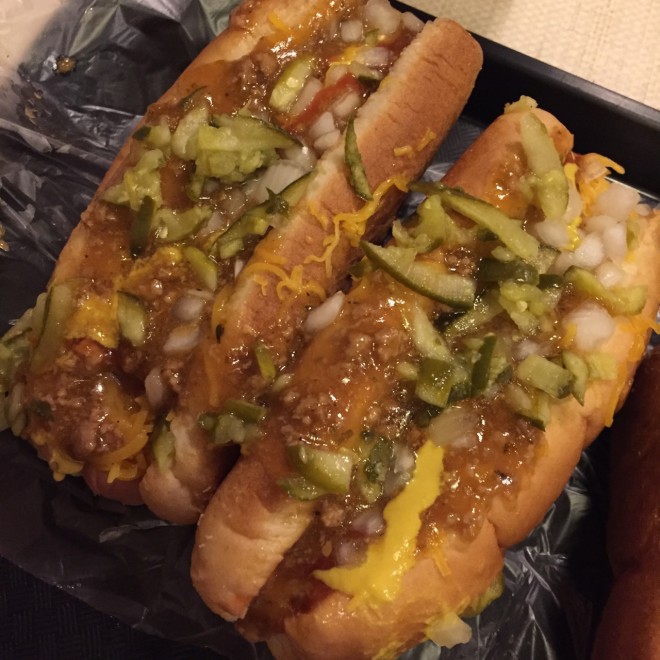 …but the hot dogs are oh so good. They’re simple, served in steamed buns, and covered in toppings like chili, cheese, and shredded dill pickles. 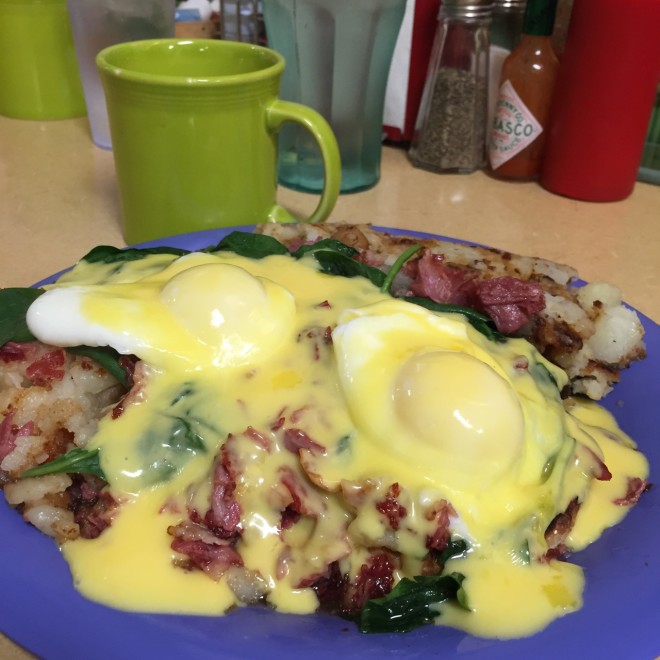 Our first full morning there of course had us visiting Real Food Cafe, where our all-time favorite Irish benedict is sure to make an appearance. 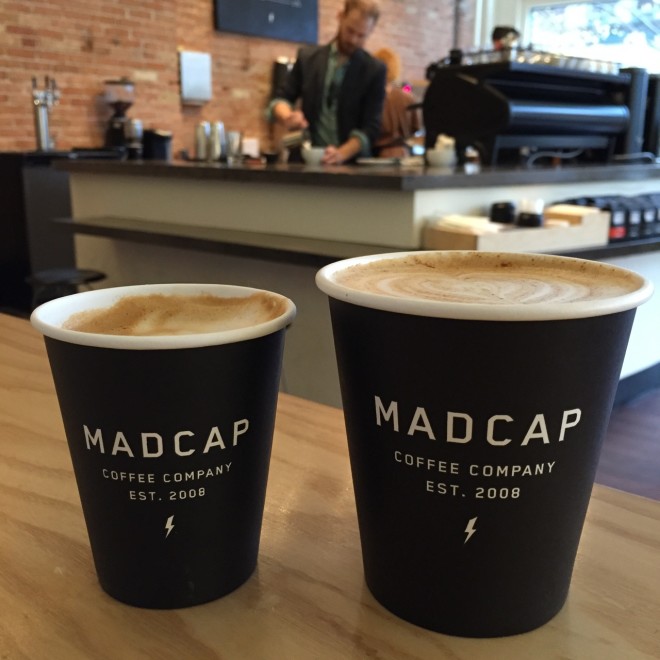 And we snuck downtown when we had the chance, to grab a cappuccino and a cafe miel at Madcap. 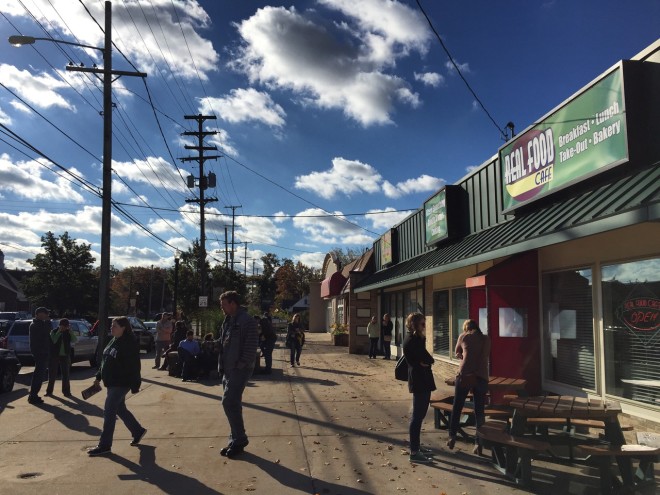 Morning #2 found us at Real Food for breakfast #2. Grand Rapidians (who are ultimately Michiganders, not Michiganians, please note) love their breakfast, and don’t even flinch at a 45 minute wait for it on a Sunday morning. 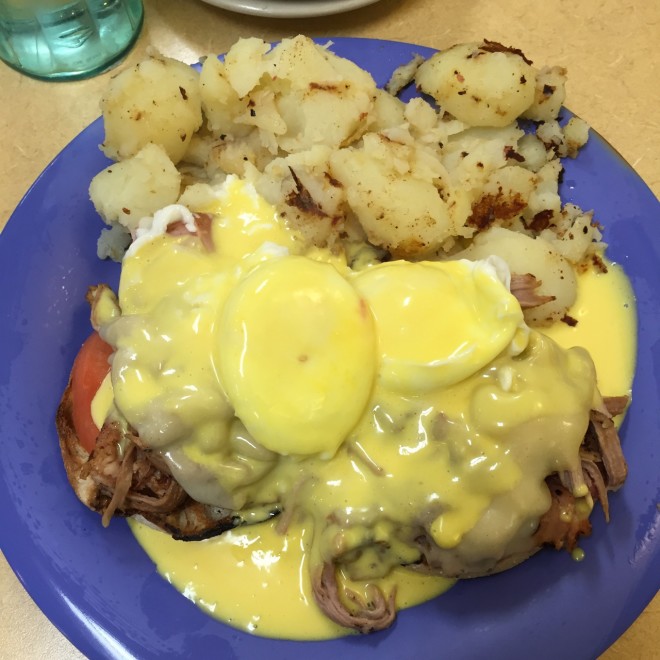 The best part about making multiple visits to Real Food is getting the chance to try specials like this Cuban benedict with pork, ham, tomatoes, and a mustard hollandaise. 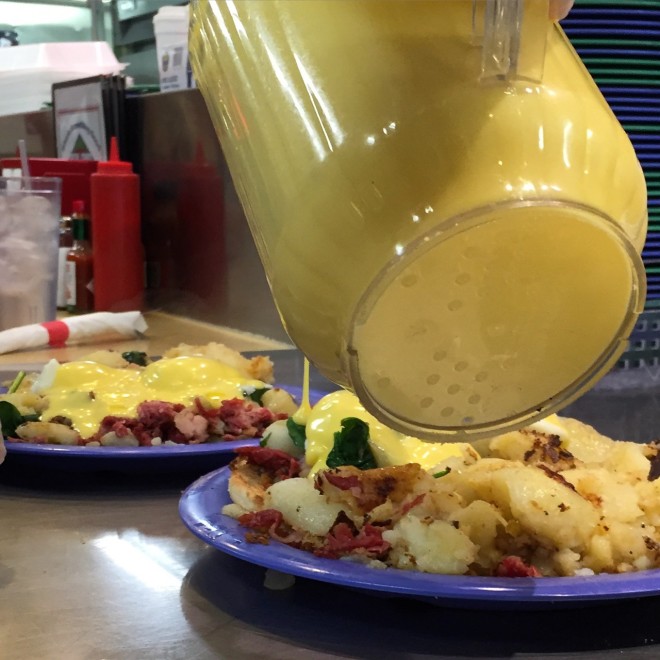 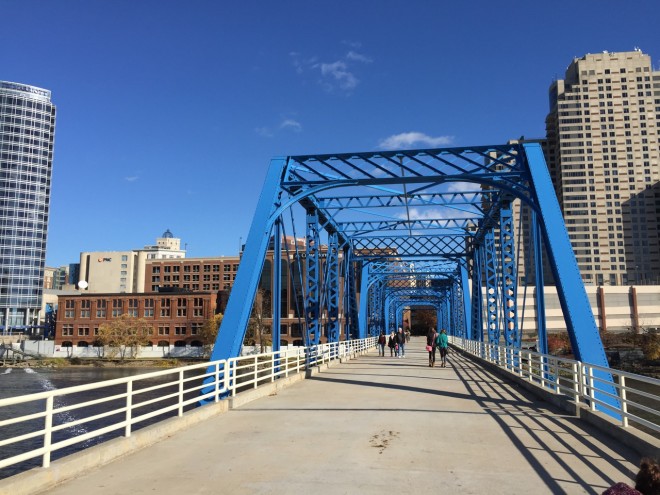 With a nice afternoon, we took the boys and their cousins to the riverfront downtown. 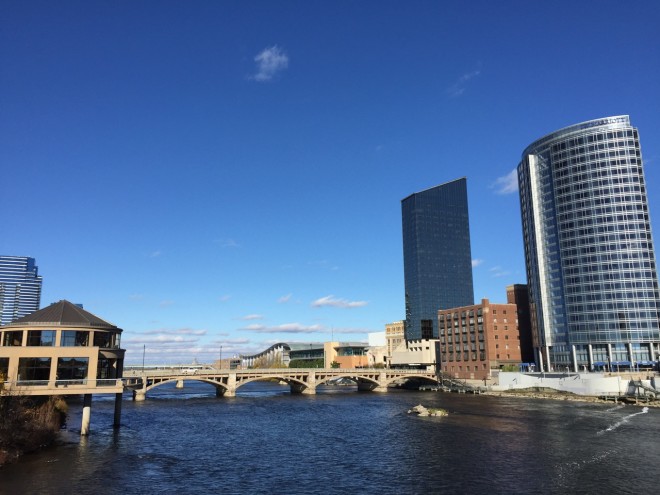 Grand Rapids has done a superb job at renovating and building along the Grand River. The convention center, performance hall, the public museum, walking bridges. 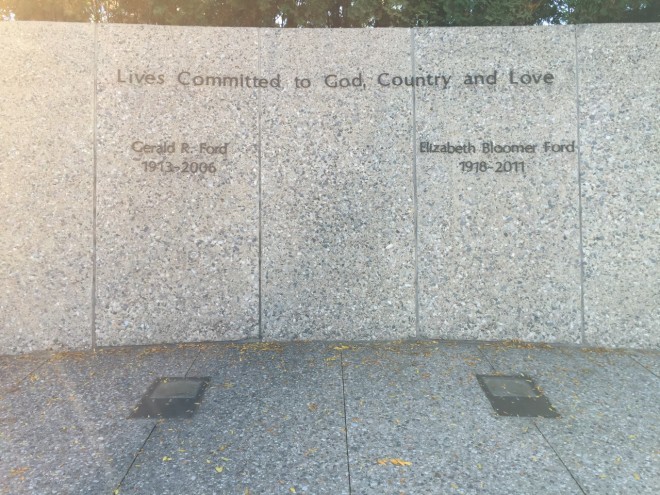 Just outside the Gerald R. Ford Museum (which is currently closed for renovations) is the burial site of President and Mrs. Ford. 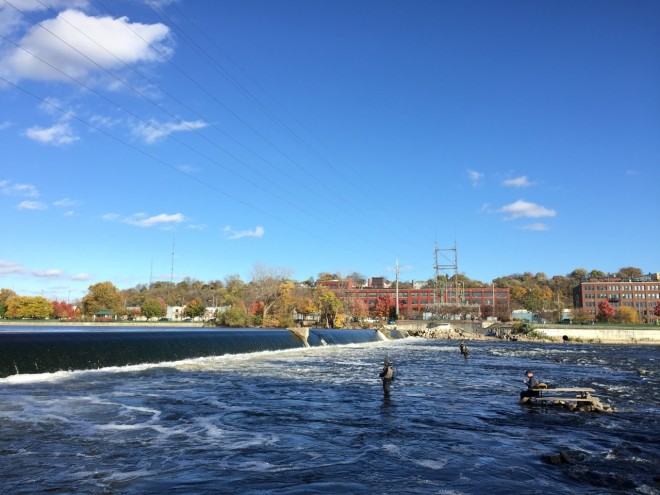 We also drove up the road to the Fishladder Park. The fishladder was built because spawning fish aren’t able to swim upstream over the larger dams. The fishladder (which is just off to the left of this photo) is a series of smaller dams they can jump up. The area is popular for fishing; so popular, apparently, that someone dragged a picnic table to the middle of the river. 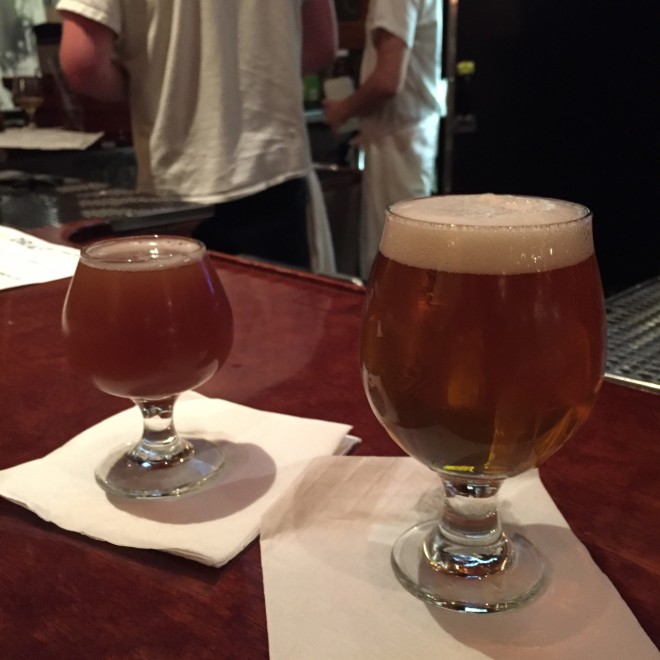 My brother Mike and I made a stop at HopCat, a beer bar and restaurant that’s been voted one of the top beer bars in the country. HopCat brews some of its own beer, but they feature even more from all across the country. There was all sorts of stuff I had never heard of, including a rice IPA. 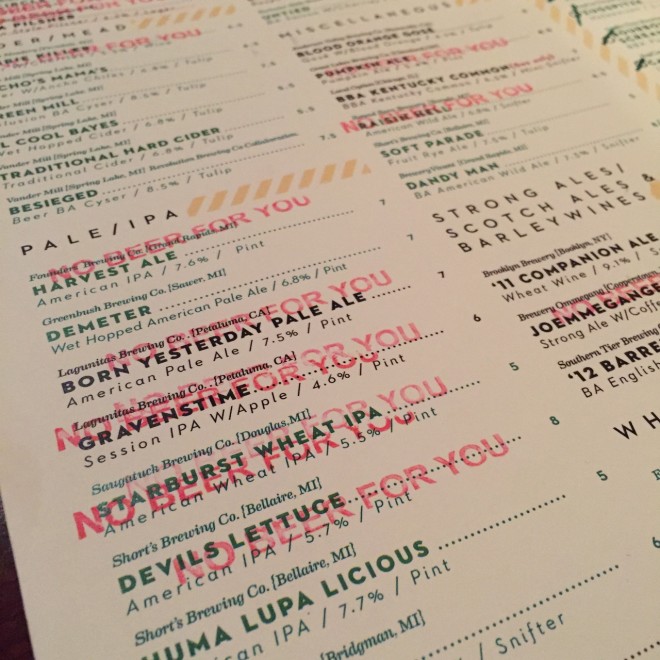 Hopcat runs through a lot of beer, so this is how they mark up the menus to show what’s out. One column on the menu has “on deck” beers that they check when they appear on tap. 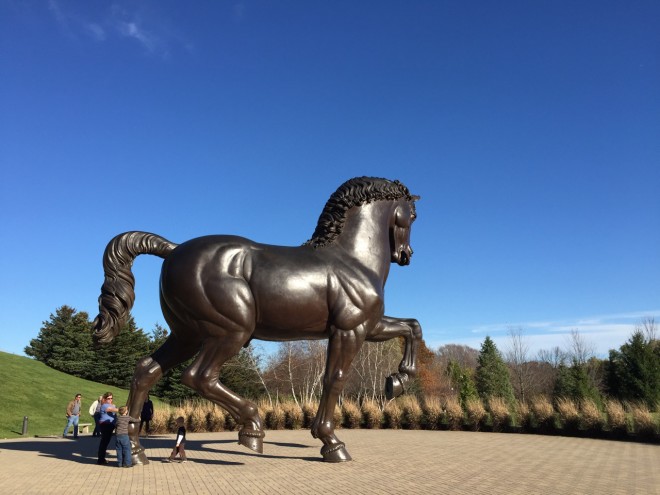 Aside from a cold and drizzly Halloween night, the weather was perfectly fall-like. It allowed for a lovely afternoon at the Frederick Meijer Gardens, with greenhouses, outdoor sculptures, kid’s play areas, an open amphitheatre, and more. We made a stop at the famous American Horse sculpture, modeled on a design by Leonardo da Vinci. 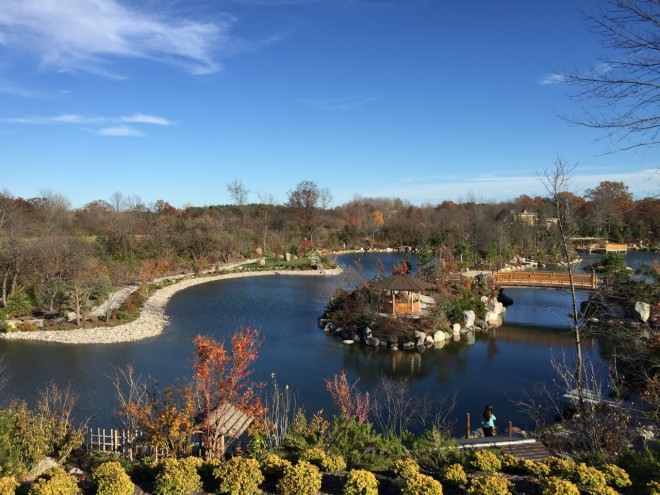 The new Japanese gardens are huge. We strolled around part of it, working our way up to the top of an observation hill. 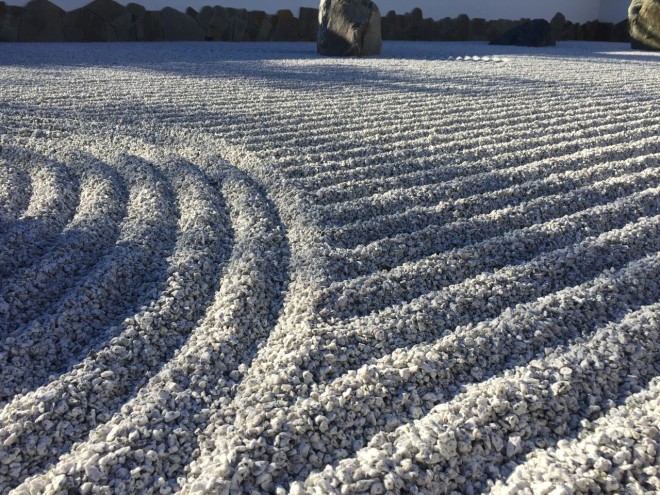 The best thing about places like Frederick Meijers Gardens is it takes multiple visits to see everything. 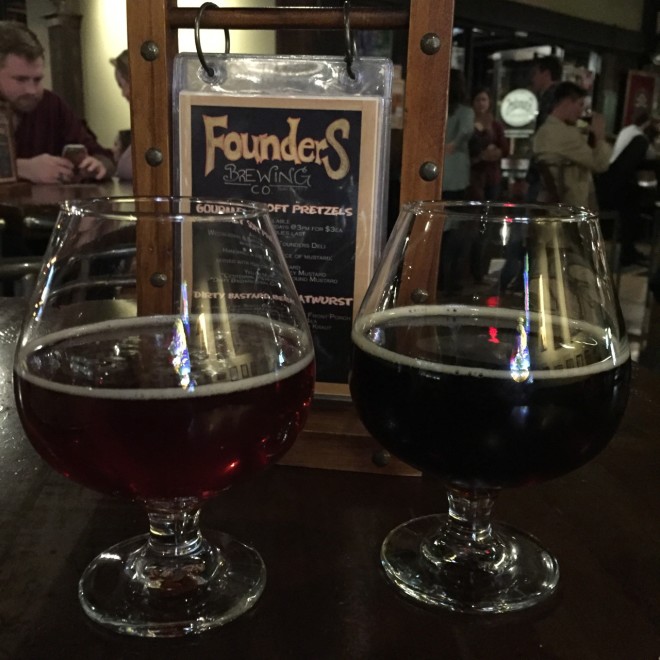 I need to make at least one visit to Founders‘ taproom. The spacious taproom is always buzzing with activity, and I can’t resist when favorites like their Backwoods Bastard barrel-aged Scotch ale or Devil Dancer triple IPA are on tap. 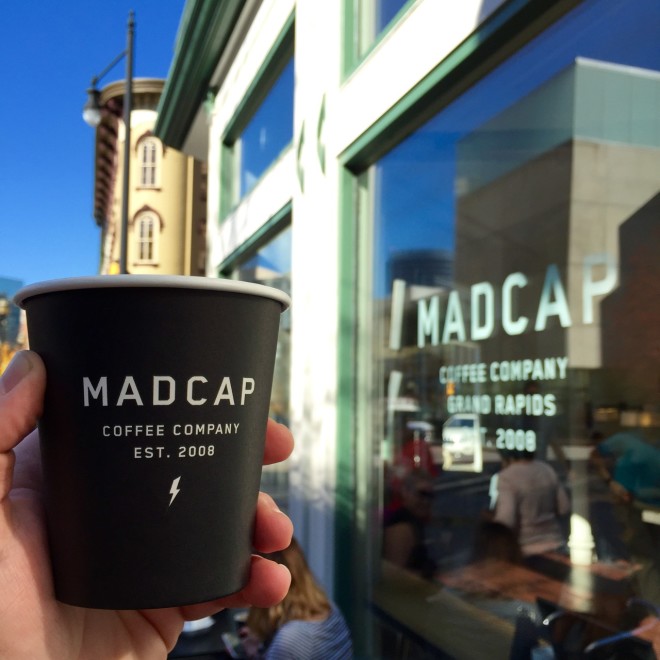 On our last morning we tried to stop by our favorite restaurant, Little Africa, but they were closed. So we snuck across the street for an excellent Indian buffet at Curry Kitchen. And then one last stop at Madcap before we hit the road! (And, yes, we did spend time with family on this trip, too.)