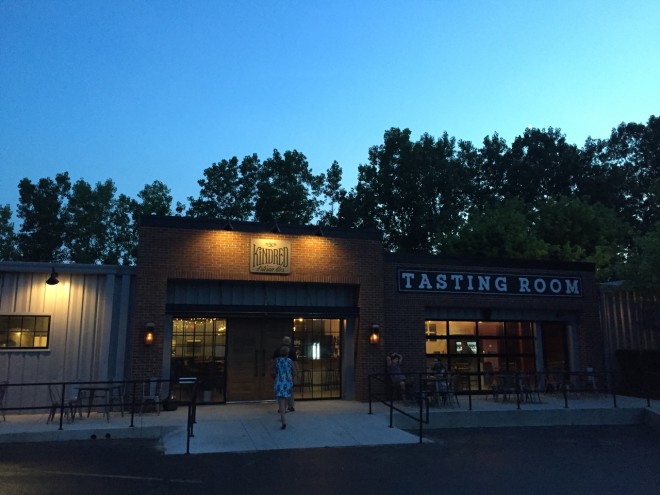 It’s my goal to “travel” the entirety of the Columbus Ale Trail this year. The Ale Trail is a collection of 28 central Ohio breweries; you get a passport – the “brew book” – from Experience Columbus or any of the participating breweries, then visit each brewery, buy a pint, and collect a stamp. Four stamps gets you a souvenir pint glass; all 28 earn you a limited edition Ale Trail deck of cards.

I’ve already tackled four breweries on my first leg of the trip; read all about it here. And now I’ve collected four more, starting with Kindred Artisan Ales in Gahanna. 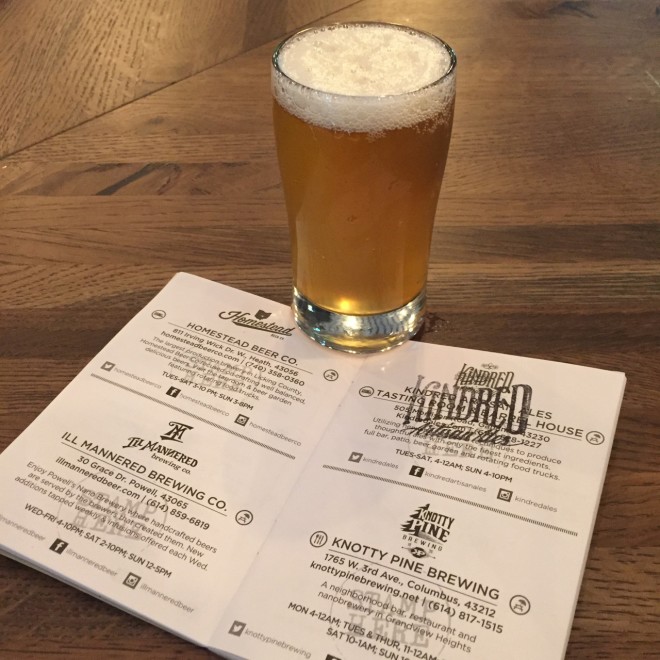 This was my first time visiting Kindred and sampling their beers, so I had a little bit of everything: wit, farmhouse ale, pale, berliner weisse. 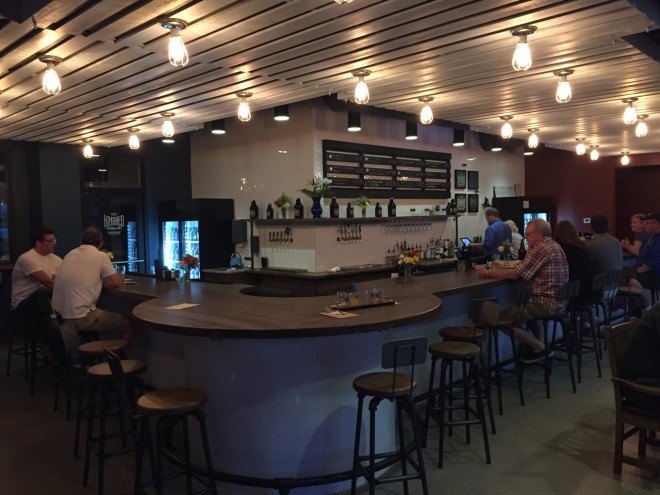 Their taproom was a new build, and it felt, well, newer than I expected, but it was still plenty cozy. Big bar, plenty of tables, a small patio out front. 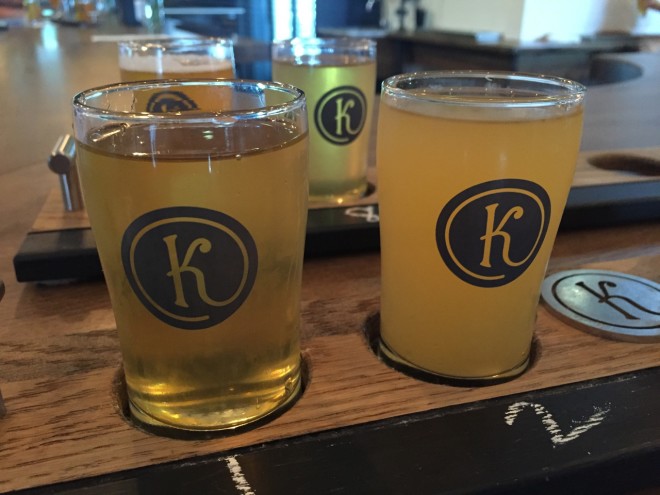 Kindred specializes in wild and sour beers, with a few other styles mixed in (fun fact: I wrote about them in Columbus Monthly). They launched with a wit and a porter on tap, with more beers worked in the rotation. Given the size of their barreling and sour program, I’m sure we’ll see a lot wider selection in the coming months and years. 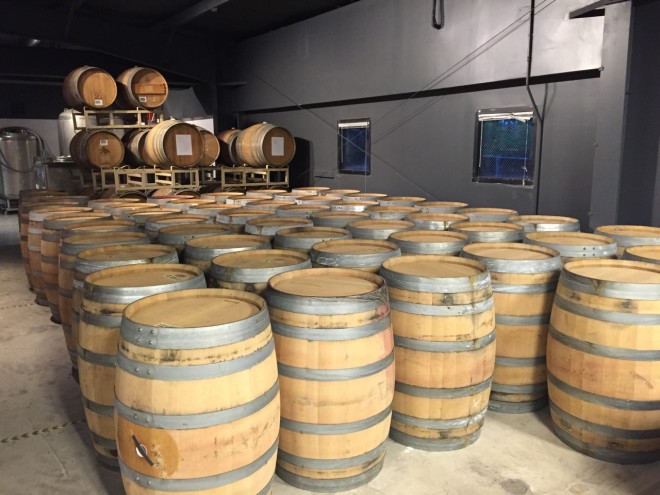 Their main production brewery is located off-site, but next to the taproom is their barrel storage. Patrick Gangwer, one of the founders, told me they started with 20 barrels this spring, but by the end of 2016 they’ll have 400 filled with beer. From there, he’ll age and blend more and more sours. 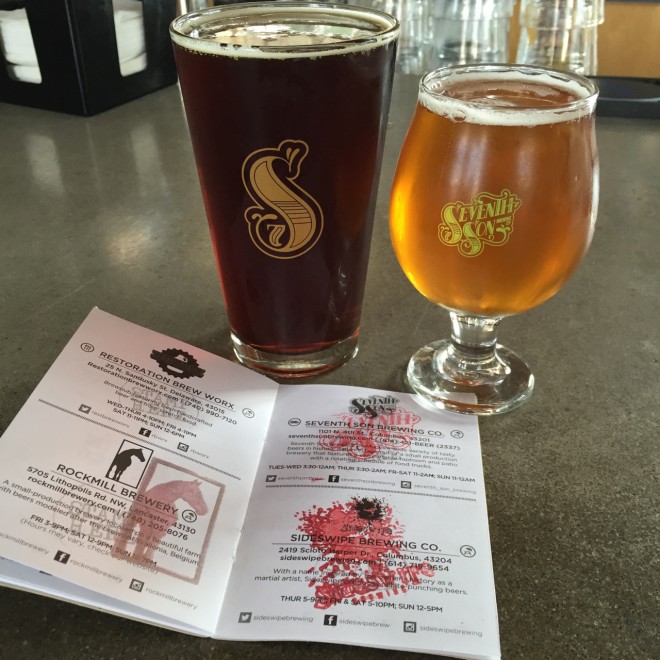 Next stop: Seventh Son Brewing. I like to say that Seventh Son is the old school of the new school. Of the recent wave of breweries, they were at the forefront with Zauber, Four String, North High, etc., and now they’ve established their presence in Columbus. On our latest visit, we sampled the American strong ale (one of my favorite Columbus beers) and the equally solid Proliferous double IPA. 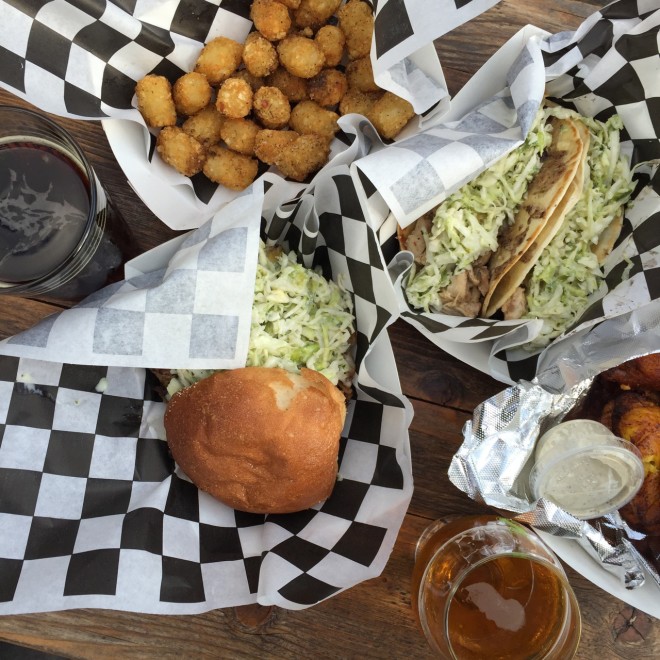 Seventh Son features a consistently solid line-up of food trucks like Challah, Baba’s Porch, Dos Hermanos, and others. We caught Explorers Club there on our most recent visit, where I was reminded how good their food is. We ordered fried plantains, tater tots, the mofongo sandwich, and jerk chicken tacos. The tacos were dressed with a jalapeno slaw that really catches up with you. 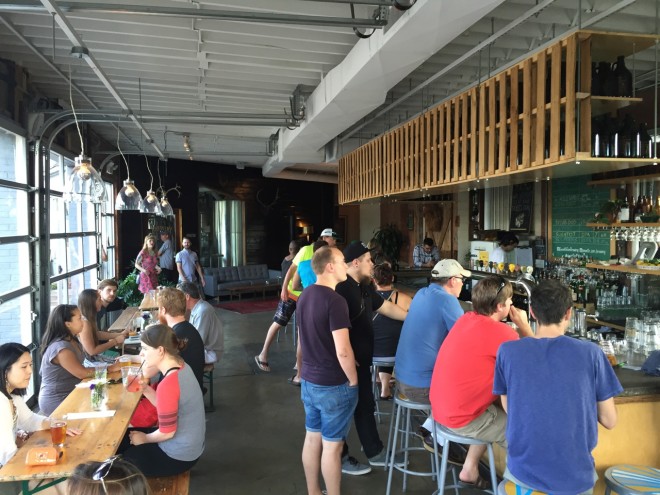 I love Seventh Son’s space, from the multiple rooms to the two patios to the natural light. And their beer is consistently great. Heavy on the IPAs at times (no complaints here), but with enough variation to keep things interesting. (I’m a big fan of their Oubliette imperial stout especially.) 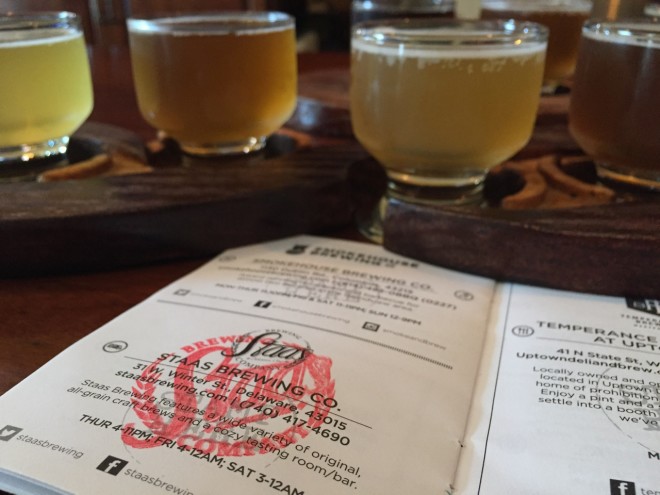 On a free evening last week, we trekked up to Delaware to collect two more stamps. This partly happened because we’re always looking for an excuse to go to Staas Brewing. Staas is one of our favorite breweries in central Ohio. Liz and Donald, the owners, are so nice, and they brew a roster of consistently great beer across the spectrum, from stouts and porters to saisons and Belgian quads, from Oktoberfests to ESBs. 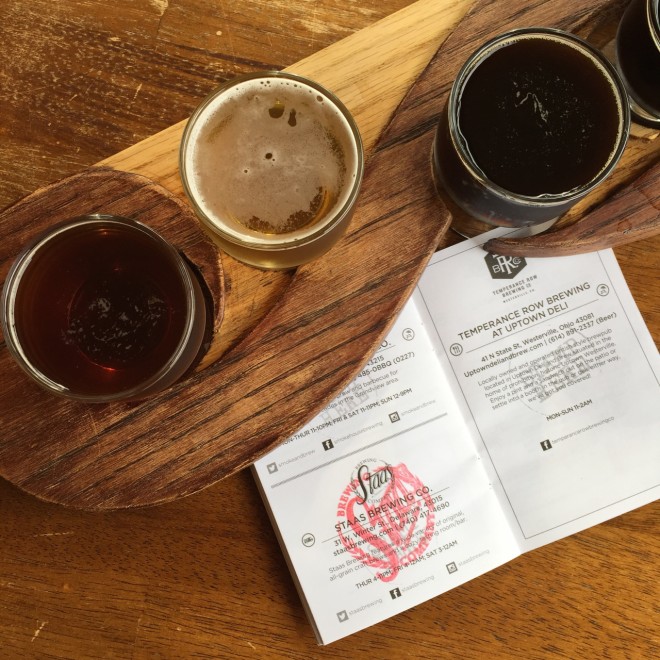 We pretty much always start with two full samplers of four beers each. 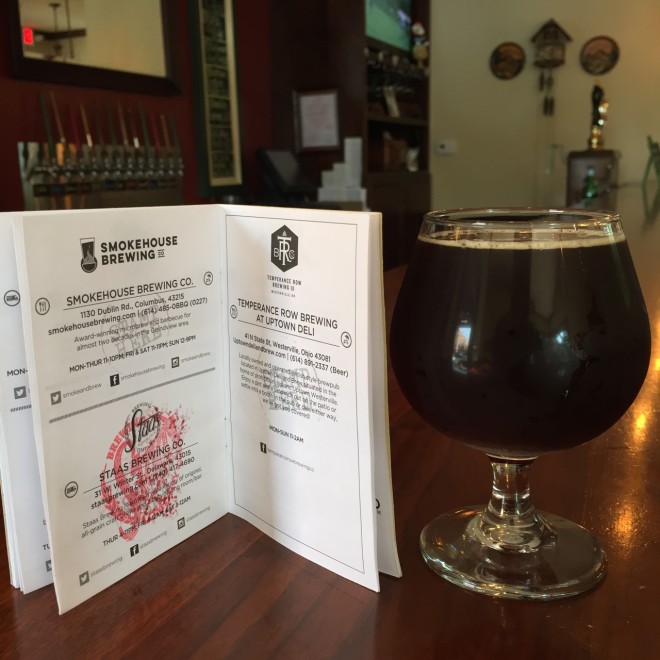 After the samples, we ordered an extra glass of their Evangelist Belgian quad. It’s a highlight amongst an already strong menu of beers. 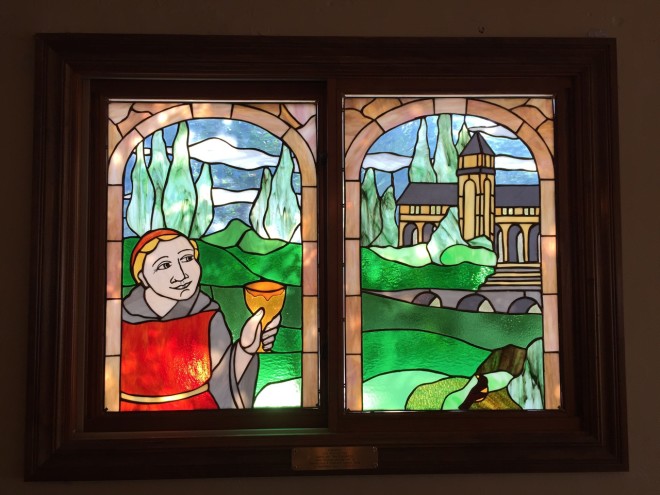 We’ve always enjoyed Staas as a cozy and quiet neighborhood pub. If we lived in Delaware, we’d be there all the time. 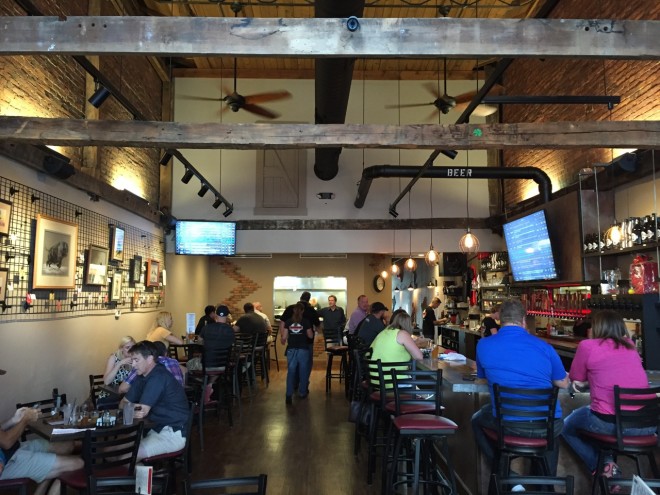 Around the corner from Staas, on the main strip of Sandusky Street in Delaware, is Restoration Brew Worx. The brewery and restaurant took the former space of Beehive Books (RIP – they sold my book back in the day). 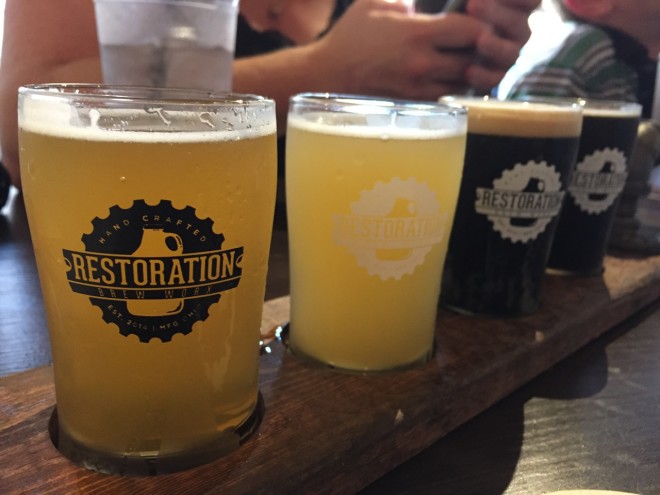 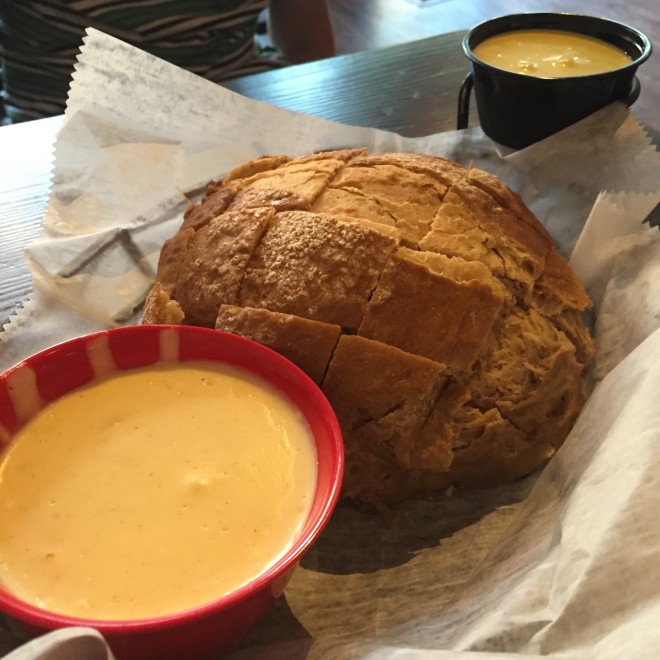 We were already full from dinner, but we snacked on their pretzel bread and ale cheese. The bread wasn’t super crusty, but it was soft and warm, and diced so we could pull it apart and dip it in the mustard and the beer cheese. Really tasty snack, just that right amount of salty and spicy to go with your beer. 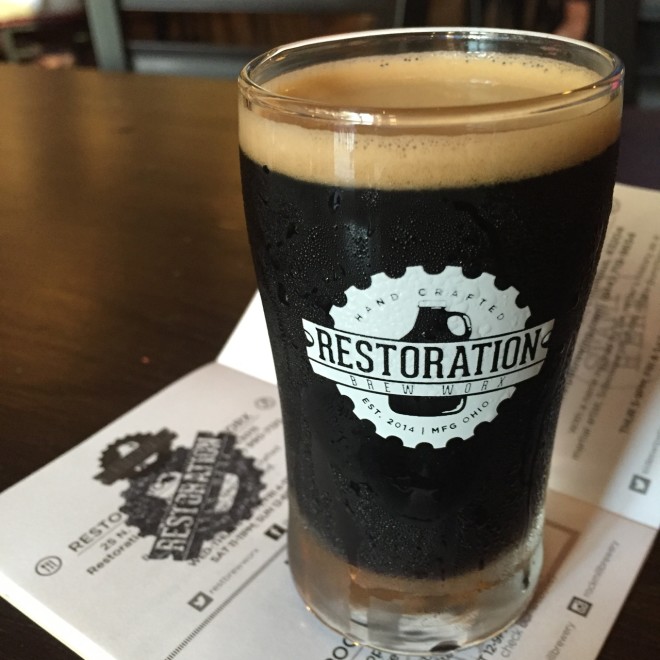 One of the highlights was their Irish stout on nitro tap. Very smooth. 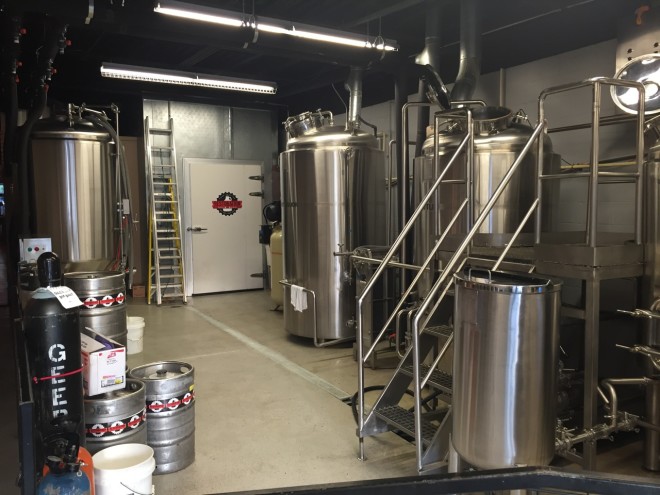 Toward the back of the restaurant, you can sneak a peek at the brewery. They must keep busy brewing enough for the restaurant patrons.

Eight down. Twenty to go.

You should try the Ale Trail yourself! Learn more about it at cbusaletrail.com. Pick up a brew book at any central Ohio brewery or at Experience Columbus, and start collecting stamps! You’ve got until May 31, 2017 to visit all 28.