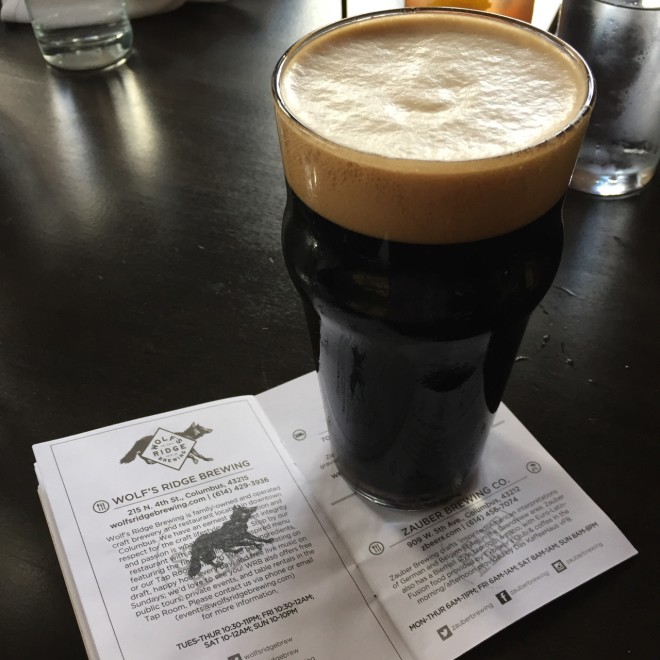 And we’re back on the next leg of the Columbus Ale Trail! It’s my goal to visit all 28 breweries on the trail this year (I have until April 2017), and so far I’ve been to 8. You can read about the first and second legs. Every time I get four more breweries under my belt, I blog about them. First off: Wolf’s Ridge Brewing. WRB is up there with the city’s best brunches (see our experience here), and to supplement the restaurant they opened a taproom last year. 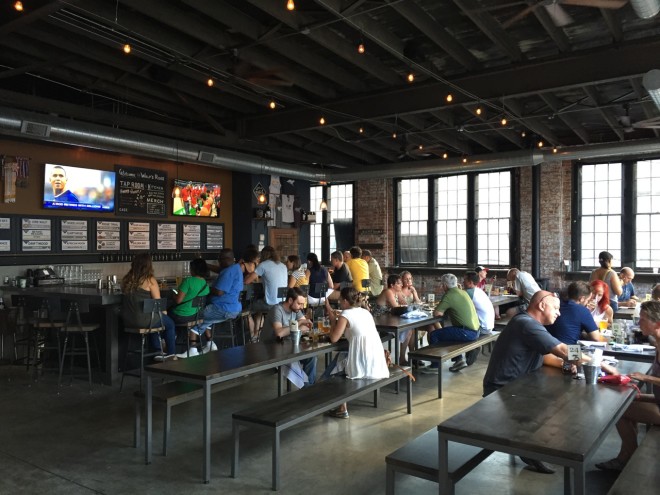 The taproom is a favorite hangout of ours. It’s cozy but bright, with a big bar, a couple TVs, long tables, occasional live music, and a couple fermenters hanging out in the corner. Wolf’s Ridge owner Alan Szuter once told me the room was all boarded up when they bought the building; they didn’t even know there were windows until they started peeling boards away. 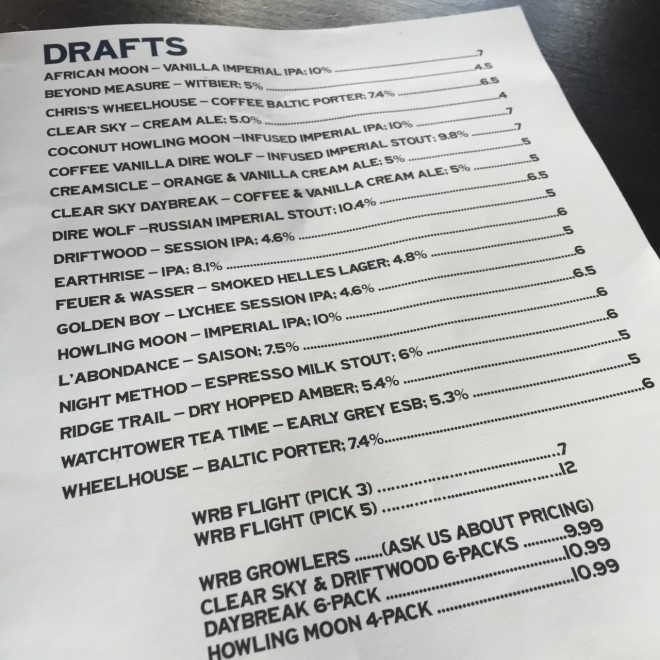 You’ll typically find about 20 of their beers on tap. Brewer Chris Davison has been expanding their menu more and more, with all sorts of infused variations on their IPAs, cream ales, and stouts. 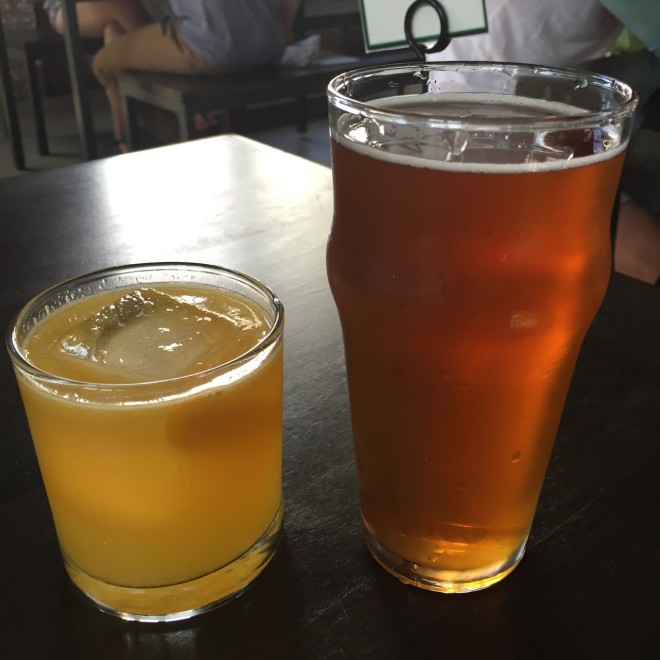 On this visit I sipped the Night Method espresso milk stout (pictured up top) and the Earthrise IPA shown here. The taproom also sports a solid cocktail menu. 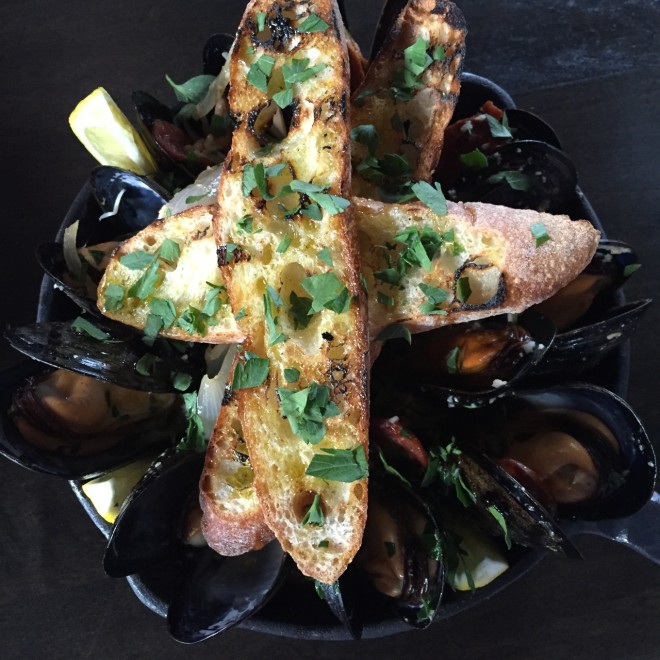 Their biggest development recently is the addition of a kitchen dedicated to the taproom. The menu has grown from a handful of upscale bar snacks to a fully-fledged list of appetizers, sandwiches, and entrees. We split a couple items, starting with the steam mussels. We’ve been a fan of mussels every since we honeymooned in Maine. These were huge and wonderfully seasoned. 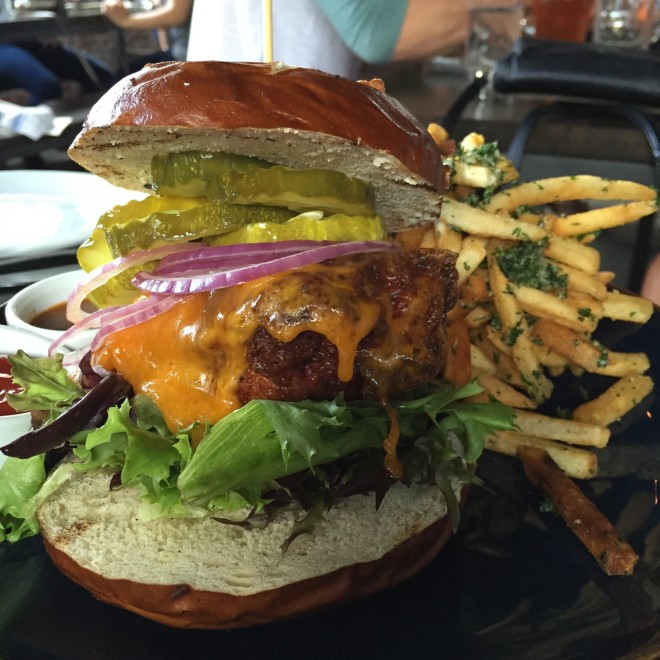 I always love me a chicken sandwich, and you can’t go wrong with the Kentucky Fried Chicken Sandwich: fried chicken, cheddar, onion, greens, and dill pickles on a pretzel bun. Be sure to get the side of garlic fries. 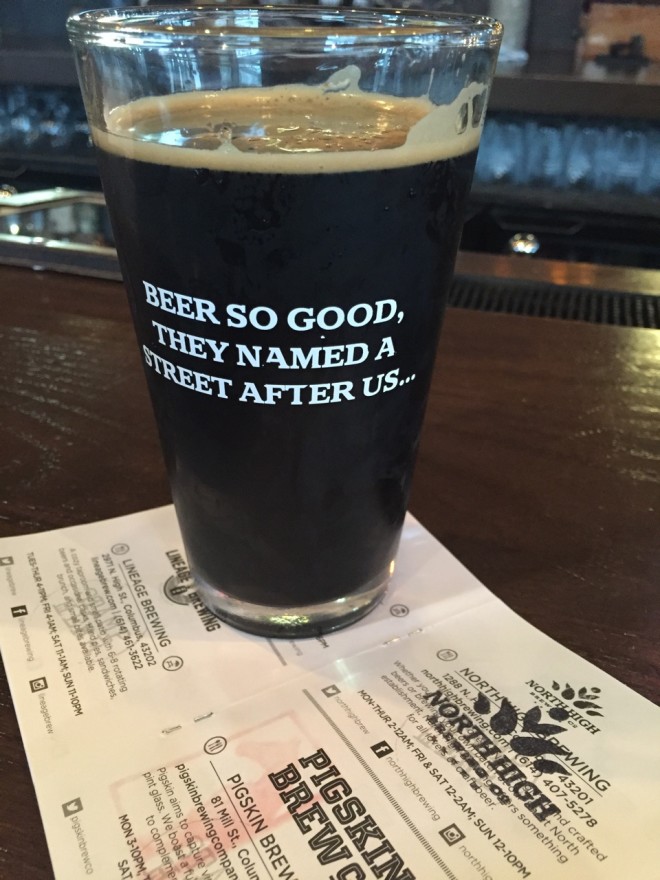 Stop #2 is North High Brewing. We enjoyed a kid-less week a while back, and during a busy day of writing, I decided to set up my “office” at North High. 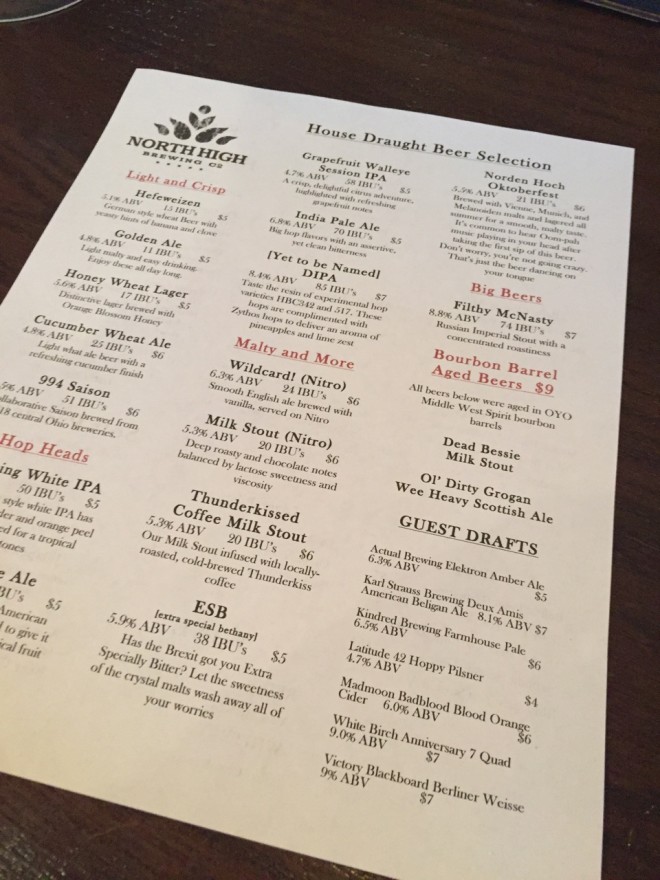 North High is a combination taproom and on-premises brewing facility; I brewed a Scotch ale there with some friends a couple years back. They don’t publish a draft list online, but their menu is wide and varied, as you can see. I’m partial to the Thunderkissed Milk Stout. 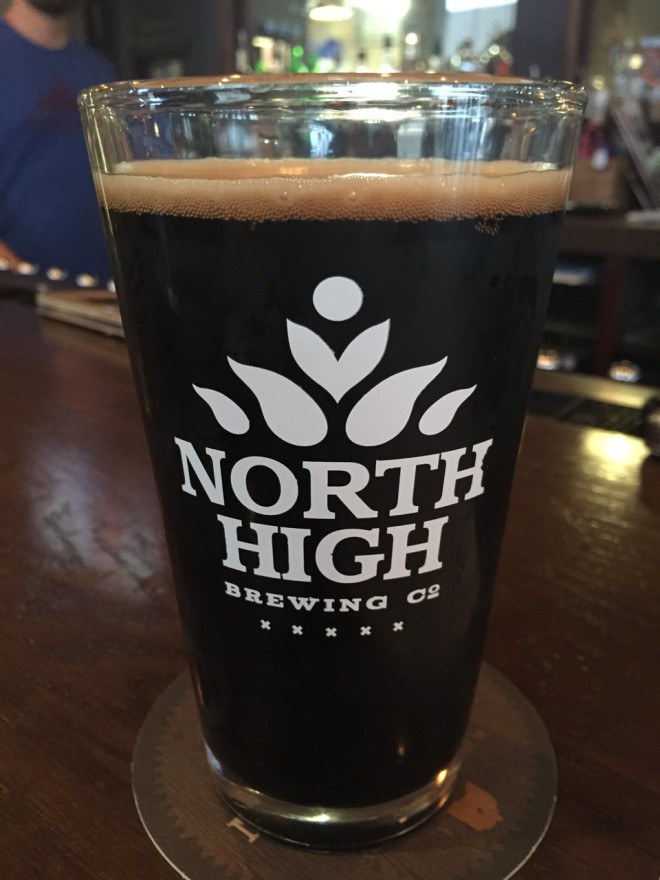 North High’s taproom sports plenty of historical details, too, from the old post office boxes to the railroad ties to the architectural details from old Ohio State buildings. 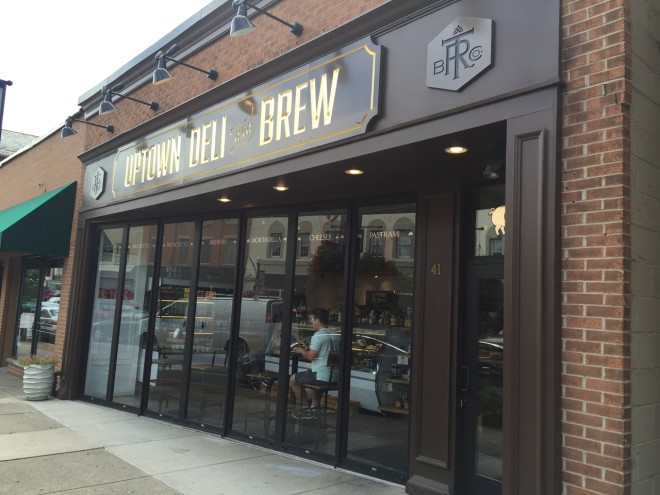 Stop #3 is a trek to Westerville to Uptown Deli & Brew, home of Temperance Row Brewing. 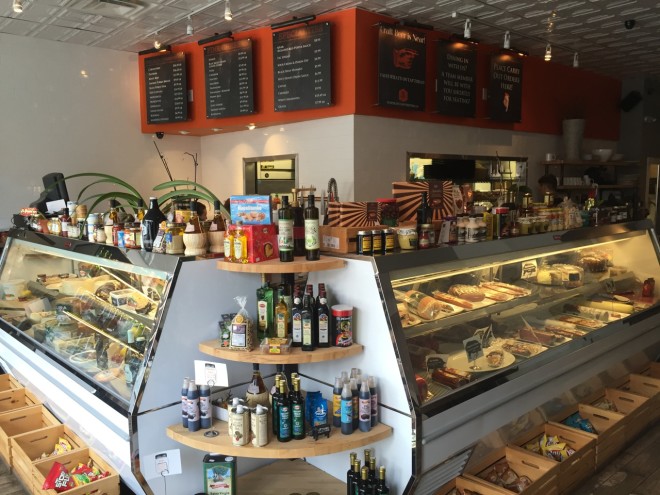 Deli in front, brewery in the back. 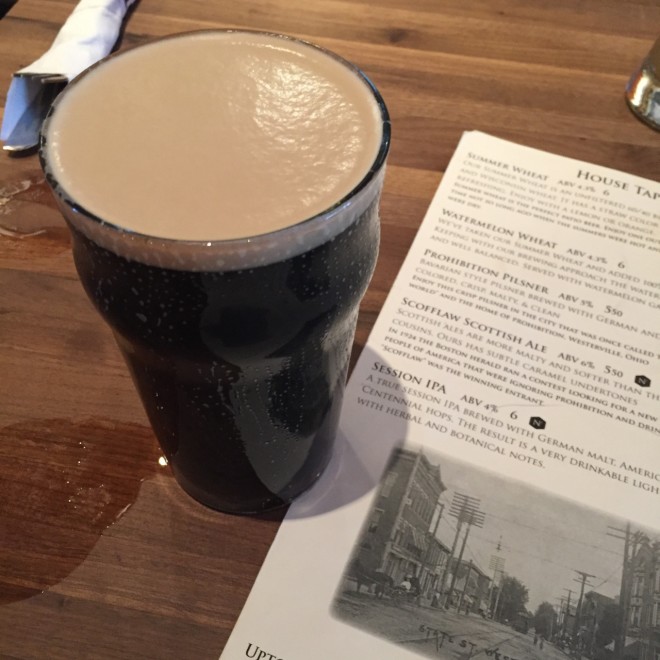 And at lunch you can enjoy both. 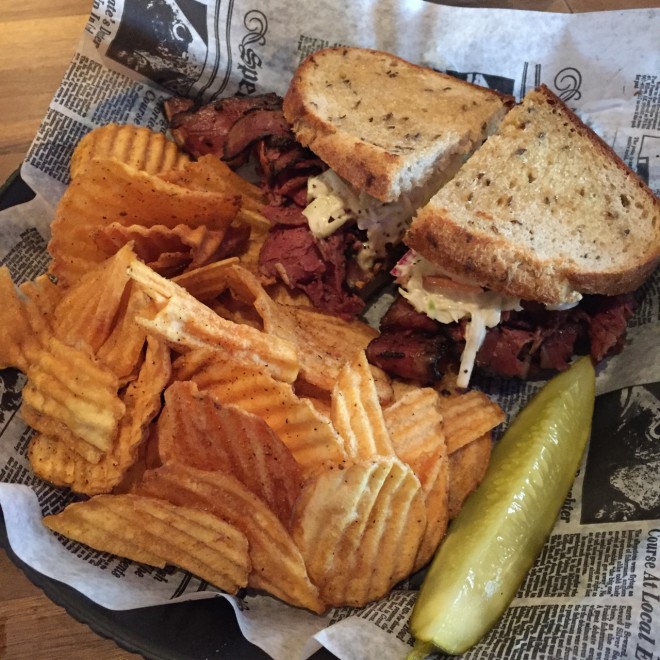 To go with the Forty Ton porter on nitro, I suggest the State & Main from the deli menu. You can’t beat corned beef and pastrami on rye. 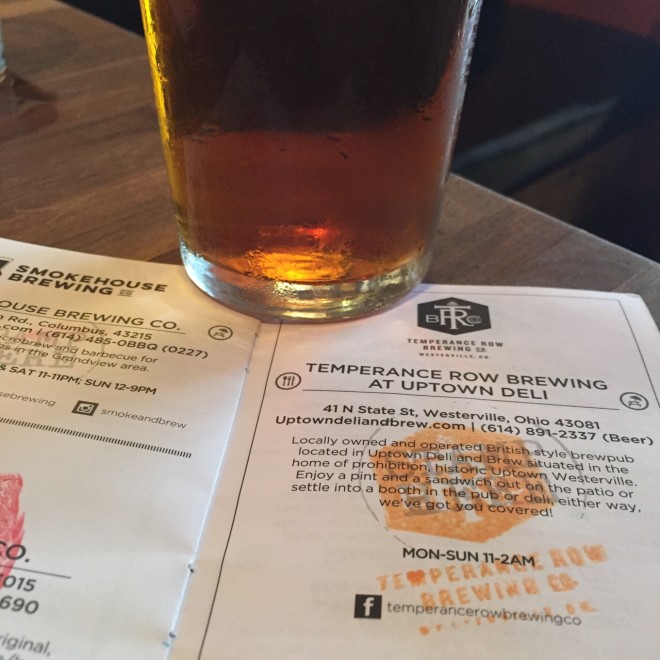 Knowing that Temperance Row is run by Scott Francis, the godfather of brewing in Columbus, I also had to try the Scofflaw Scottish ale, one of his signatures. 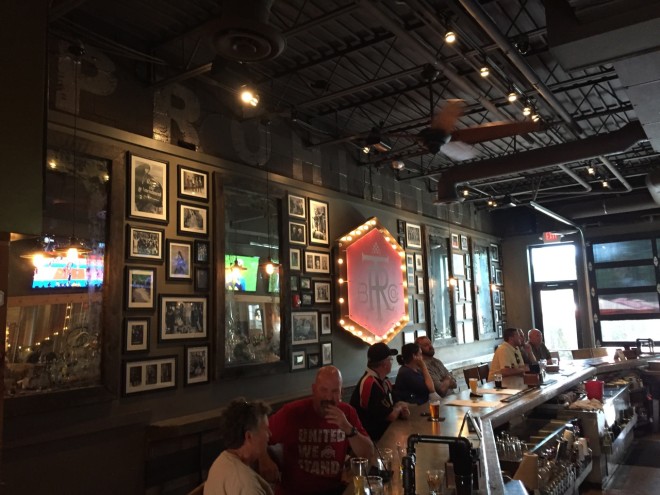 The deli and brewery feature all sorts of photos and signage nodding to Westerville’s history as former home of the Anti Saloon League during Prohibition. 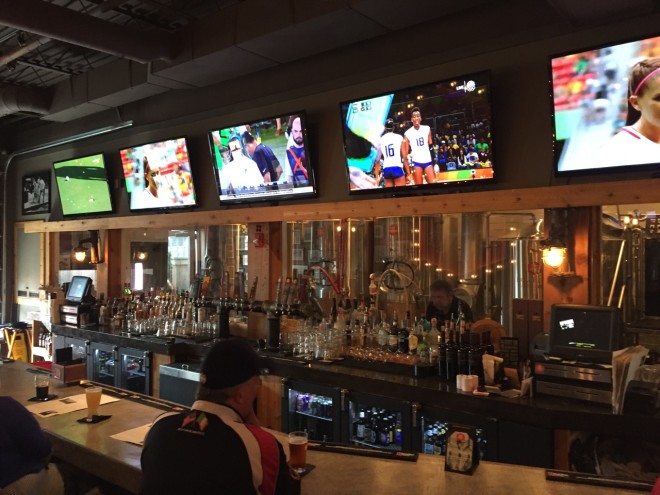 If you’re sitting at the bar in the back, you get a view of the brewery. 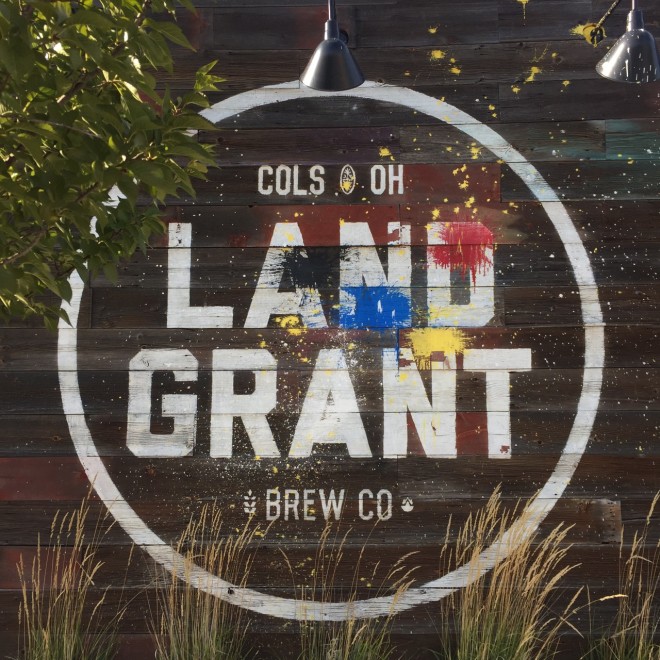 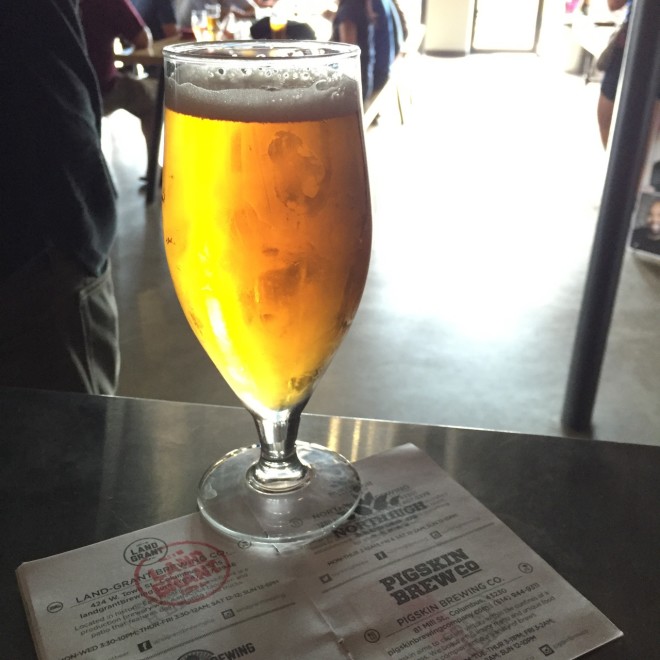 During the party I got to try the Anticipation imperial IPA. 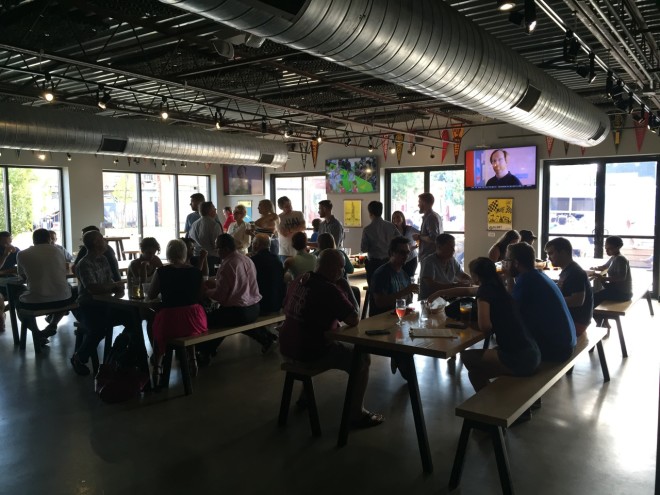 Land-Grant’s taproom has become a beloved hang-out space. It’s bright and open, with a great patio, and they host a great line-up of food trucks. 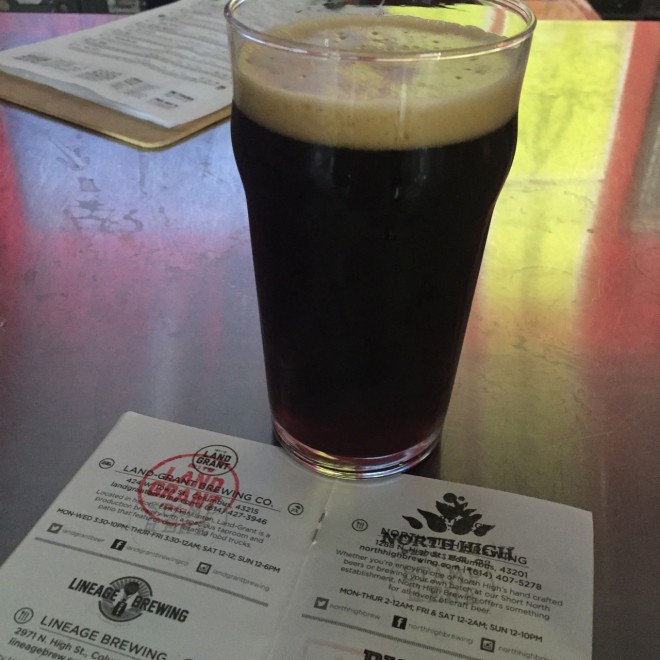 To finish out the party, I sipped on the Boom dark ale.

And that makes for twelve down. Sixteen to go.

You should try the Ale Trail yourself! Learn more about it at cbusaletrail.com. Pick up a brew book at any central Ohio brewery or at Experience Columbus, and start collecting stamps! You’ve got until April 30, 2017 to visit all 28.