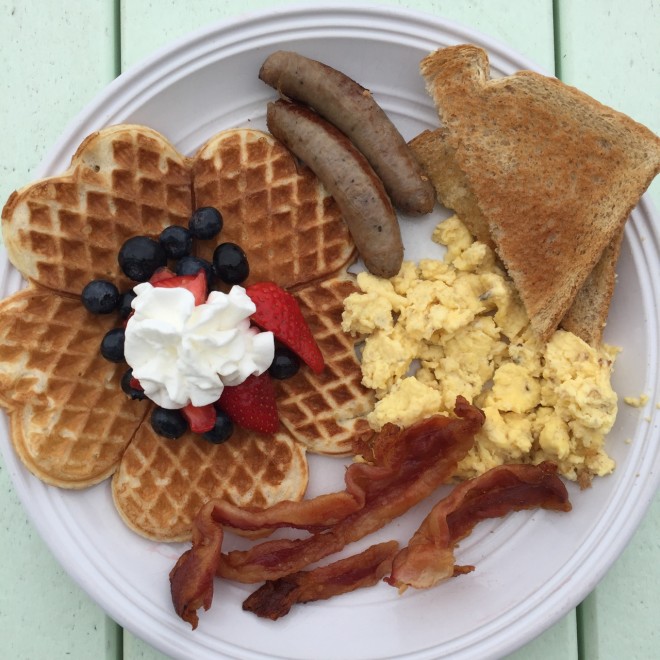 A couple weeks ago we made our annual trek to the Outer Banks. You can read parts one and two first (spoiler alert: it’s mostly seafood and breakfast and the occasional lighthouse). Here are a few more of our adventures!

I’ve said it before, but we like cooking as a family. We’re a big group, and we take turns making dinner, but we sneak in the occasional big breakfast, too, like this breakfast complete with heart-shaped waffles, bacon, sausage, soft scrambled eggs, and toast. 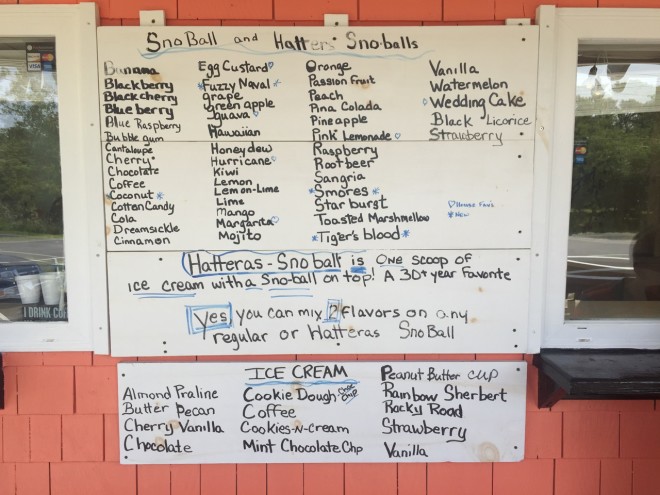 One plus of being a regular on the OBX is knowing where the hidden gems lie. (Although most are out in the open; there’s one highway that runs down the islands, after all.) One such gem is Hatteras Sno-balls, a rustic little business run by a friendly family. They serve sno-balls (shaved ice with flavored syrups), with Hatteras sno-balls being the specialty. 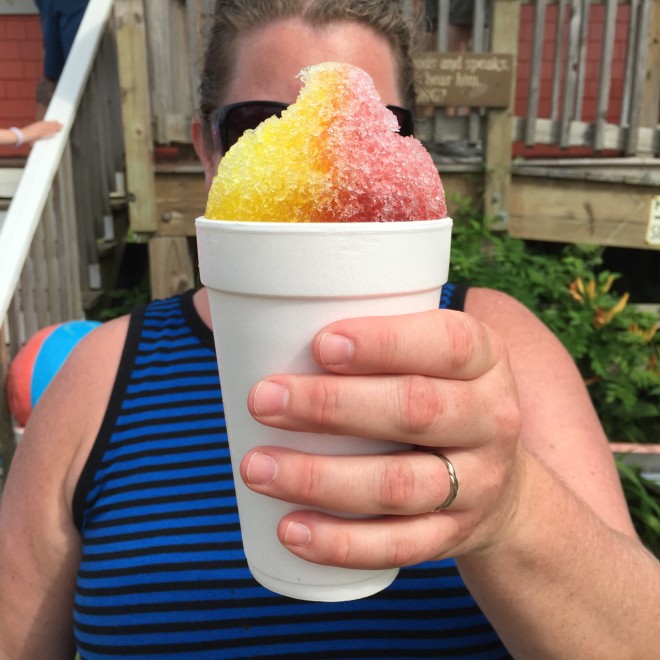 A Hatteras sno-ball is essentially a scoop of ice cream topped with shaved ice. They’re giant, cold, and messy. 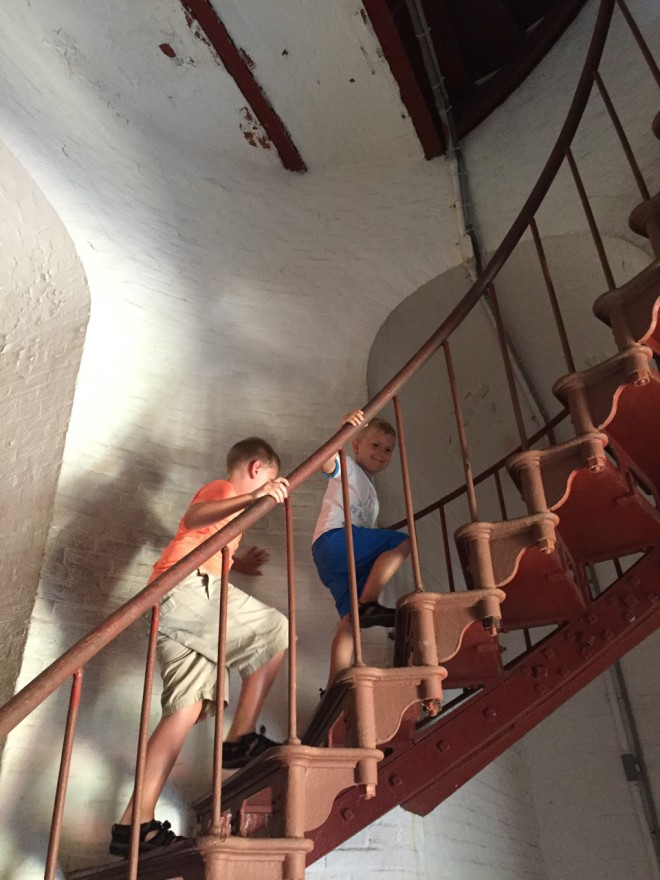 One of our annual traditions is climbing the Cape Hatteras Lighthouse. Will has climbed the lighthouse for four years now (he’s always been tall for his age), but it wasn’t until this year that our little lighthouse-loving Owen was fiiiiiinally tall enough to climb. (The National Park Service says you need to be 42 inches, and he’s 42 and a half. Whew.) 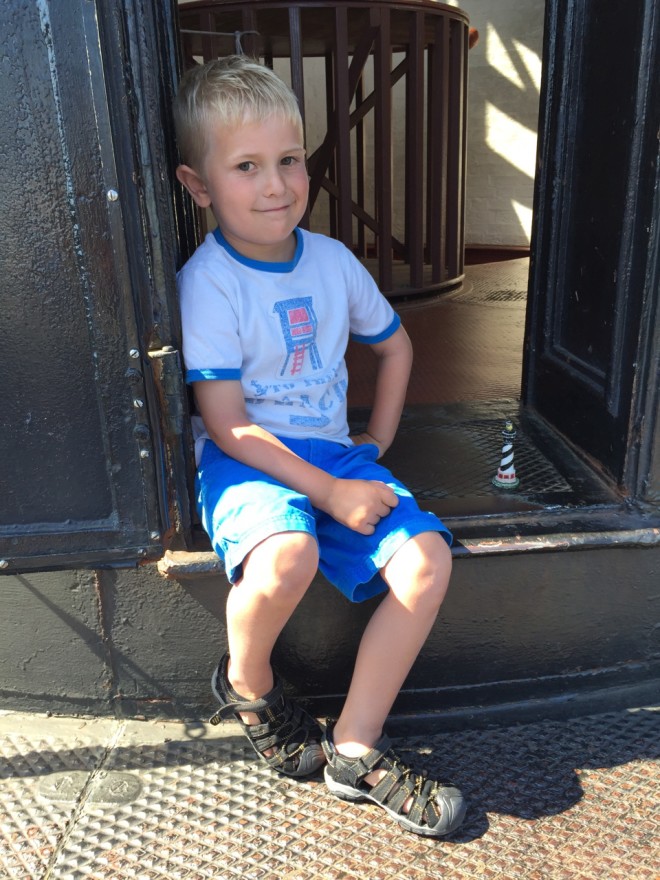 His little legs carried him all 257 stairs to the top. And his little ceramic Cape Hatteras came along for the ride. 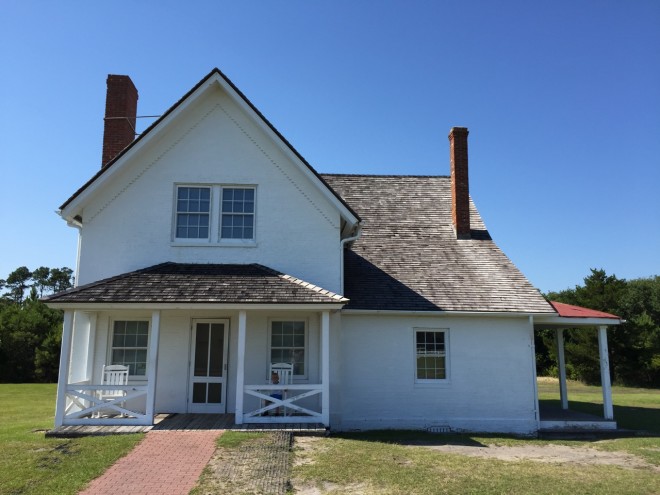 After the climb, we romped around the grounds. One of the old lightkeeper’s houses is a museum, and another is an administration building. There’s our tiny curmudgeon on the front porch in a rocking chair. We often joke that he was born 150 years too late; he would have been happy as a lighthouse keeper in the 1800s. 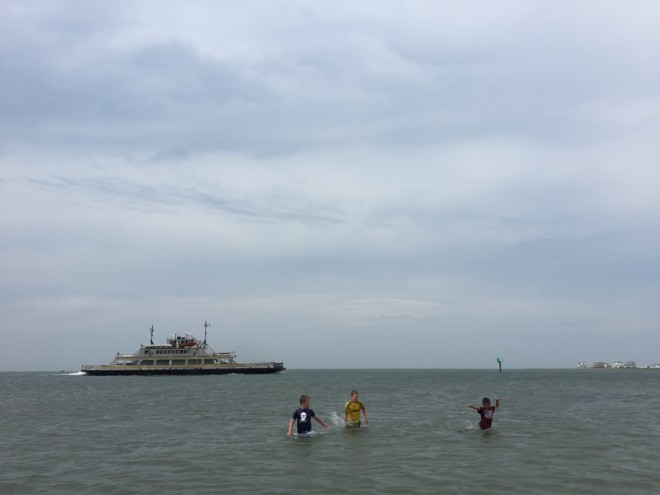 We took another afternoon to go clamming near the very southern end of Hatteras Island. There are little beaches, often with ankle- or waist-deep waters, accessible to the public for fishing, clamming, and swimming. The clamming area lets us watch the Ocracoke ferry coming and going. 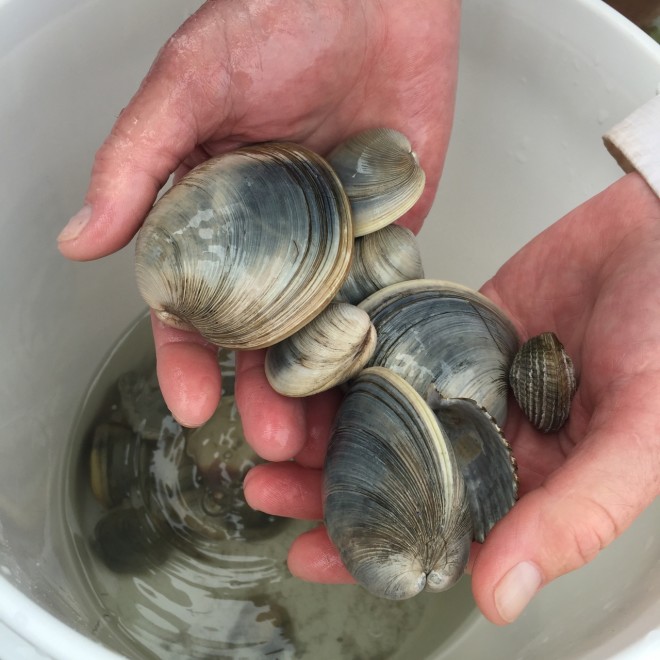 And we caught some clams (plus the odd hermit crab or two). 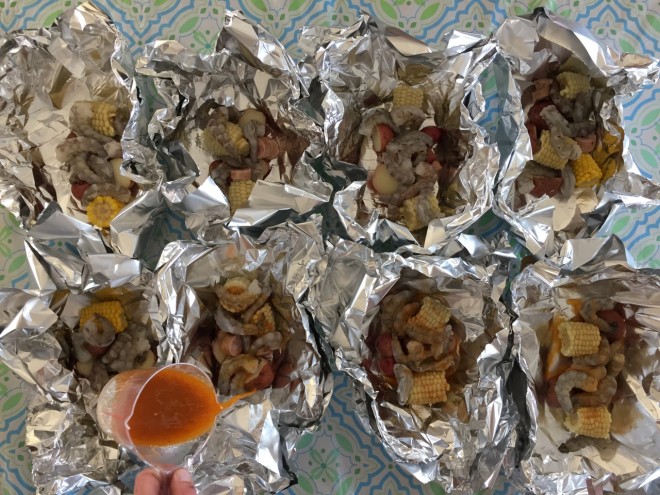 That night we enjoyed a seafood extravaganza. The main course were little shrimp boils that we put on the grill, with potatoes, corn, and andouille. 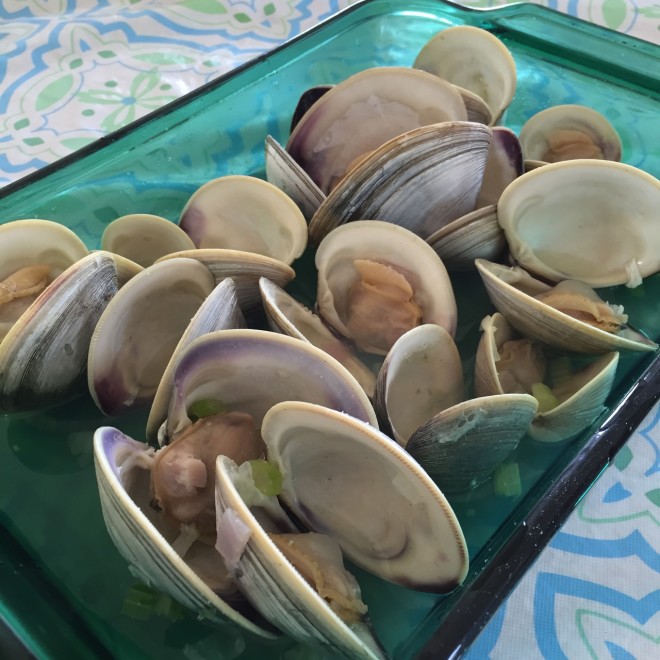 We steamed our clams… 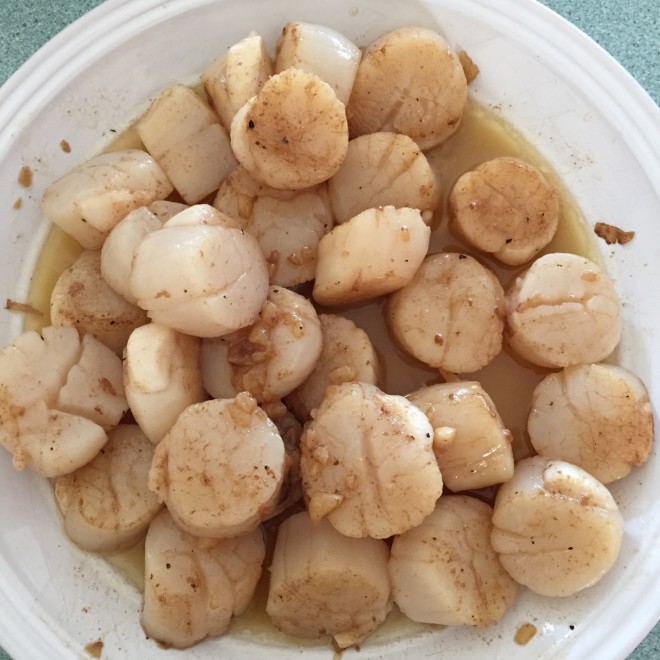 …cooked up a whole mess of scallops… 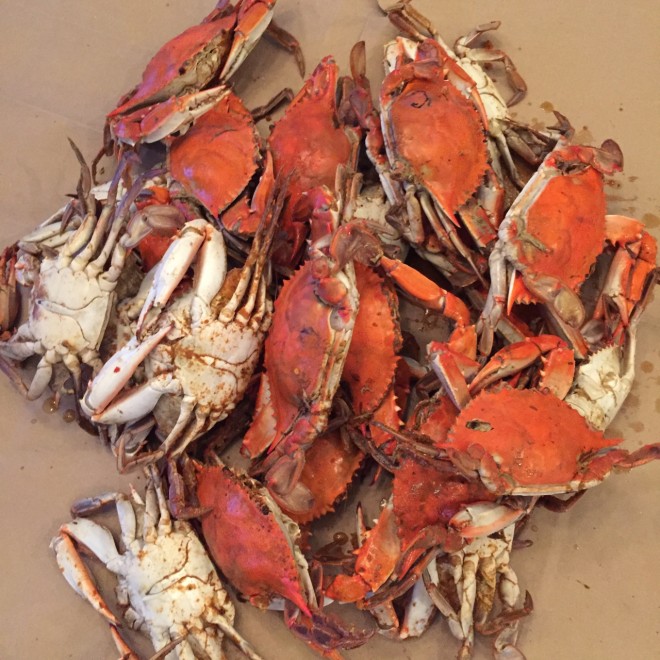 …and ordered a couple pounds of steamed crabs from Risky Business. Our brother-in-law Evan gave everyone a refresher on picking and eating crabs. 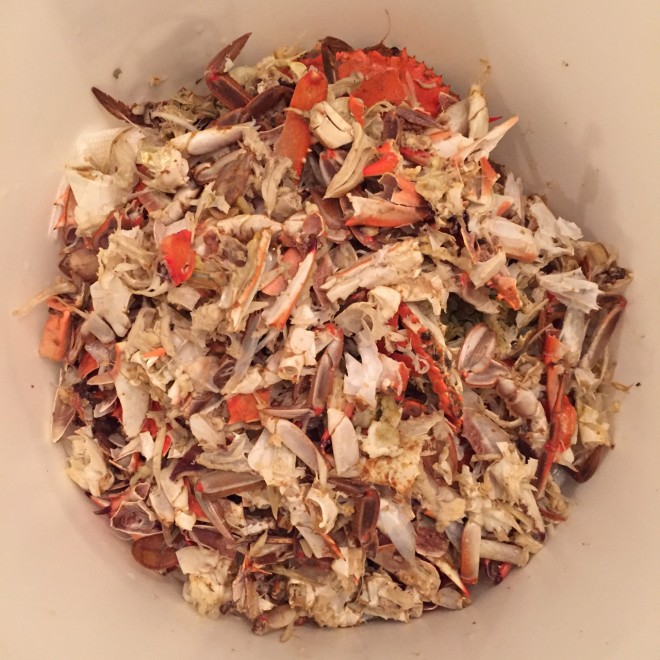 And we made quick work of it. 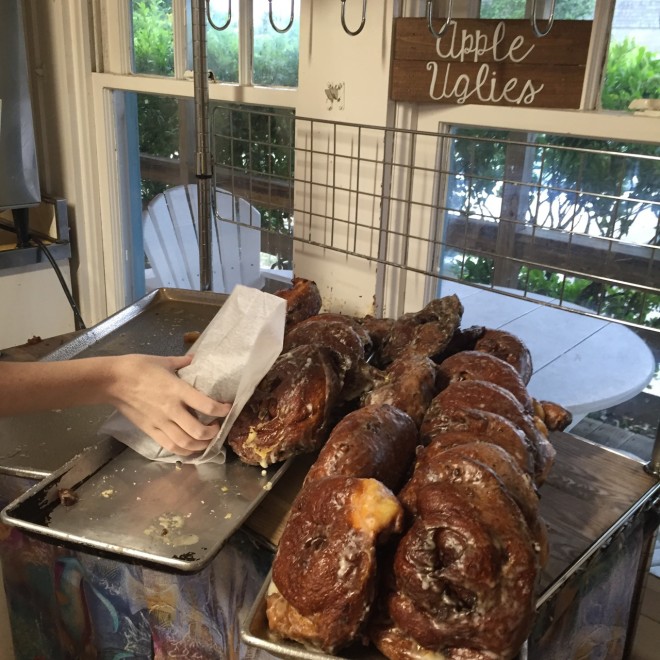 Our final morning on the island, Will and I rose early and drove to the Orange Blossom Bakery & Cafe. Orange Blossom is known for their apple uglies, these giant apple fritters. 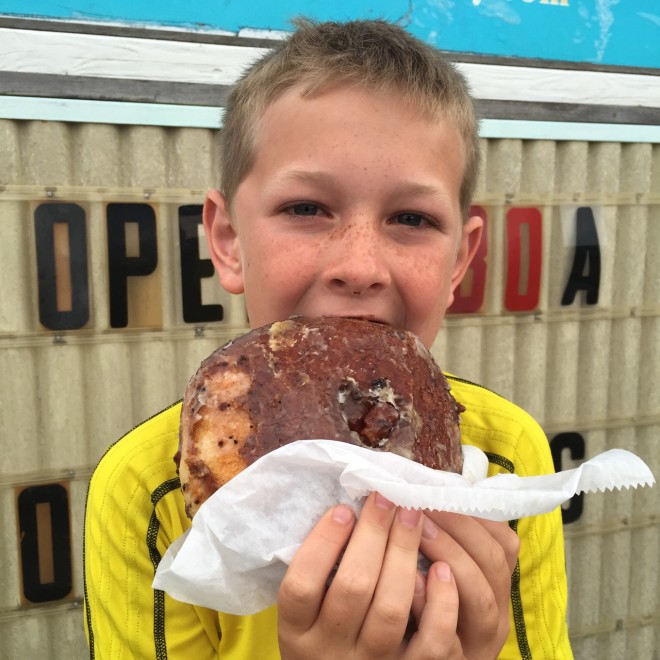 They’re as big as your head! Apple uglies were a great way to finish out the trip. Until next year, Outer Banks!

Catch up with parts one and two of the trip, if you haven’t already.