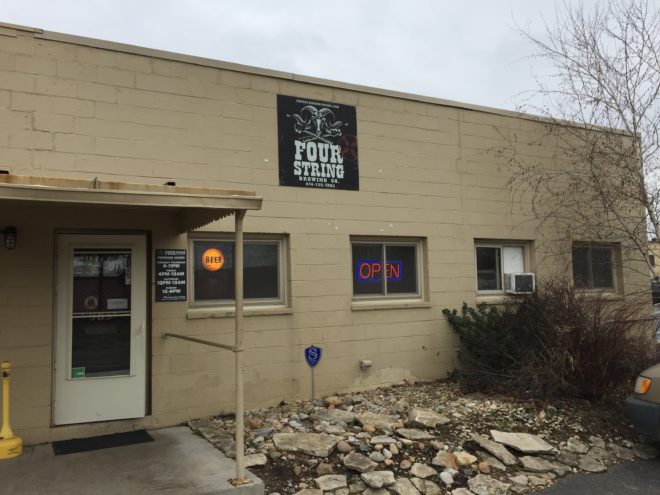 Here we are with the fifth edition of our Columbus Ale Trail journey. It’s my goal to visit all 28 stops in this year’s Ale Trail, and Cheryl of Drink Up Columbus just reminded me that volume two concludes at the end of April, and I’ve still got stops to finish. I’m writing a blog post every time I collect four more stamps; read about stops one, two, three, and four.

The first stop of this round is Four String Brewing‘s taproom in Grandview. 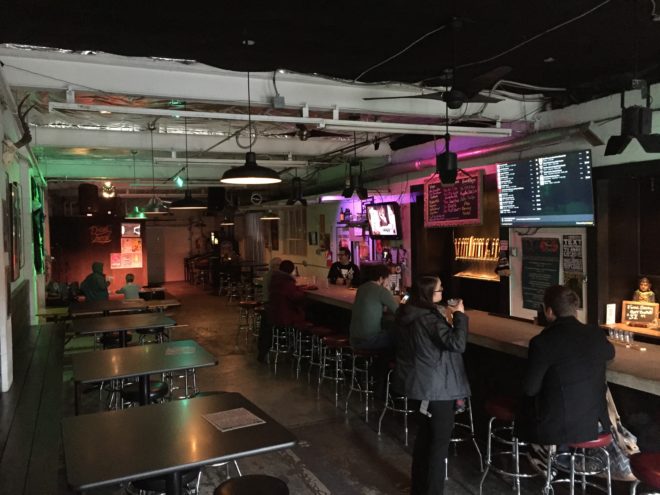 The taproom is still a bit of a hidden gem, and it has a great history behind it. The entire brewery used to be located here. Owner Dan Cochran started small-scale with modified dairy equipment as his brew system. When Ohio laws change in 2012 to allow breweries to sell directly to customers, Dan was amongst the first brewers who roped off a corner of the brewery, tapped kegs, and started selling pints. Four String eventually moved production to a facility on the west side (where there’s also a taproom that’s an Ale Trail stop) and now the Sixth Avenue location is a full-sized taproom. 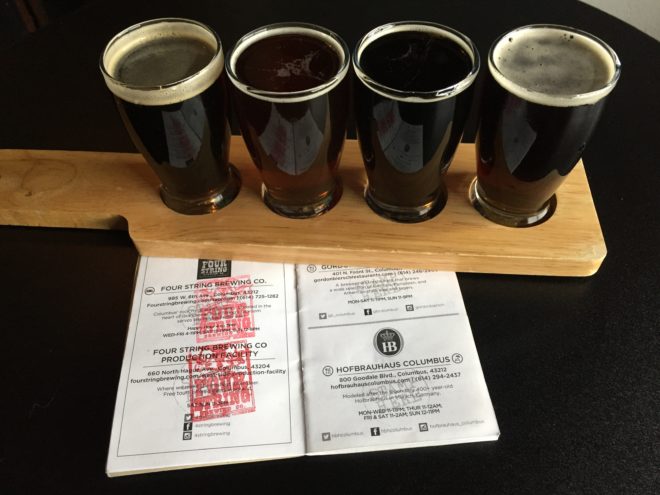 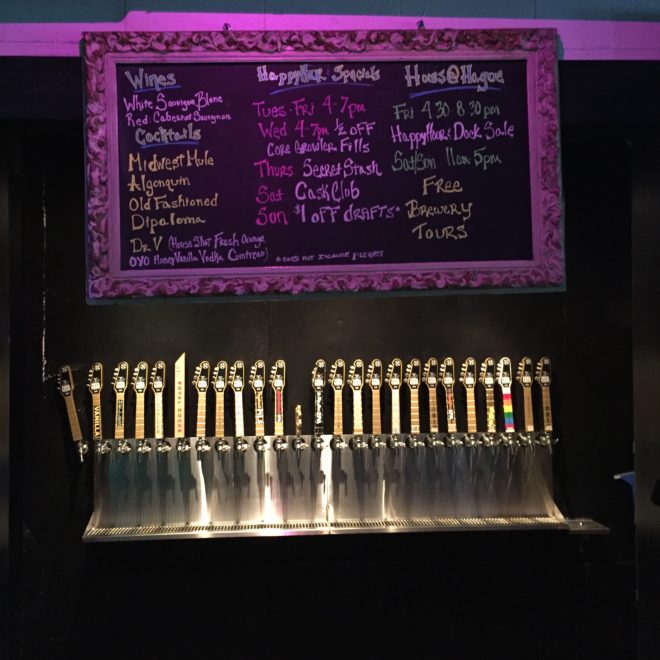 I remember the days when Four String had maybe four beers on a tap plus a firkin infused with fruit or spices. Now they’ve got a huge range of beers. 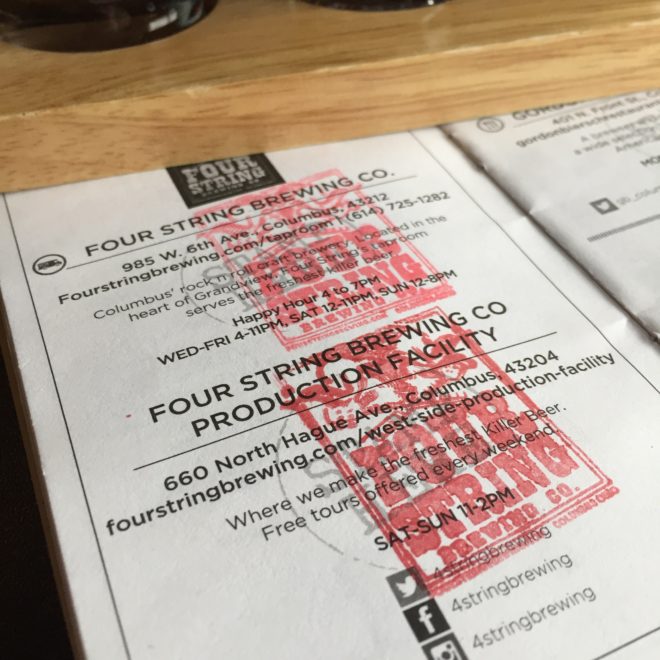 Their Sixth Avenue taproom is still a cozy little spot, so if you’ve never been, I recommend stopping in for a couple beers. 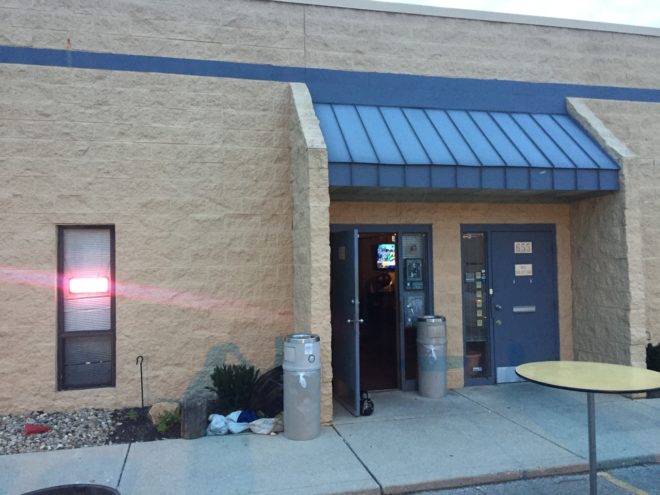 Next up is another tiny, out-of-the-way taproom: Actual Brewing Company. Like Four String, Actual was one of the first to open an off-the-beaten path taproom in their production facility. Theirs is on the west side, just a stone’s-throw from the John Glenn International Airport, in a light industrial park. Follow your GPS as best you can and look for the blinking “BEER” sign in the window. 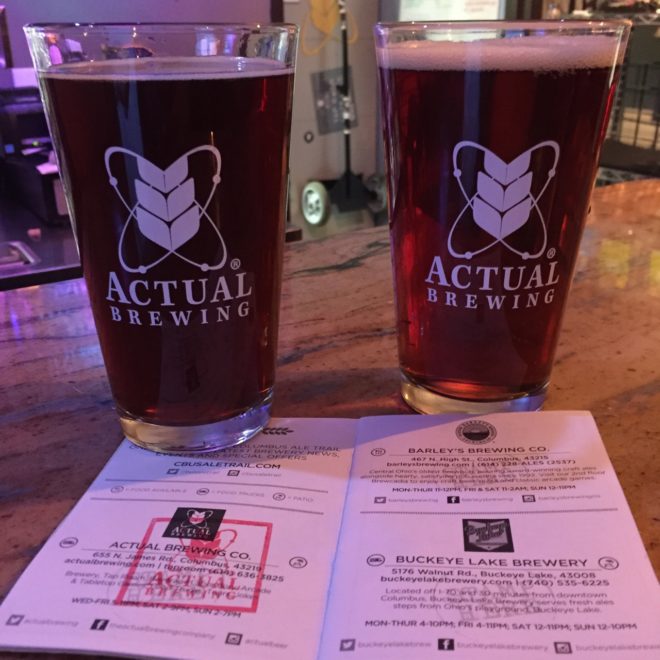 Actual’s taproom is connected to their production facility and canning line, and it’s probably one of the smallest and coziest taprooms in the city. During our stop my brother-in-law and I shared pints of their Resistor Irish red ale and their new Chaika red lager. Both easy sippers, and interesting to compare the ale and lager versions side-by-side. 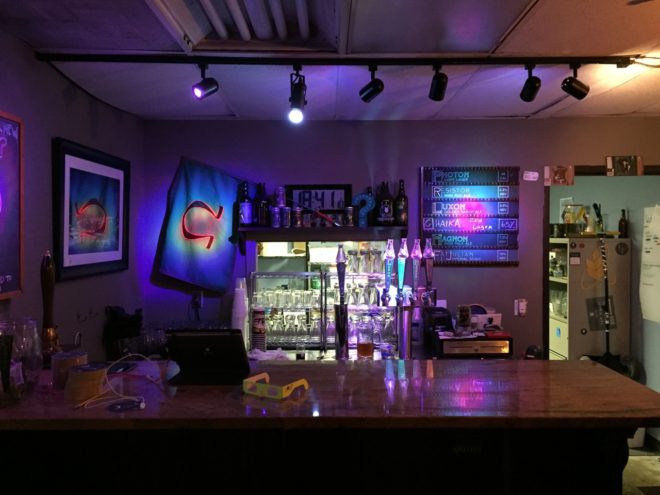 The taproom features a small bar. We saw five beers on tap plus their Photon light lager in cans. 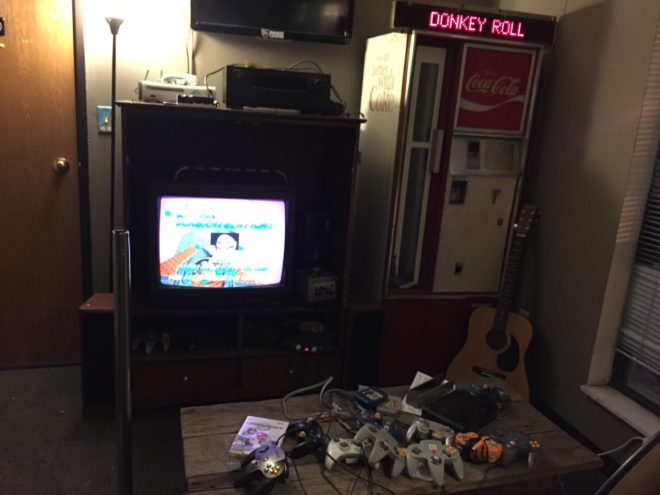 The rest of the space is almost too dark to photograph, but it features a few tables, some old arcade games, and a TV wired with all your favorite old video game consoles. 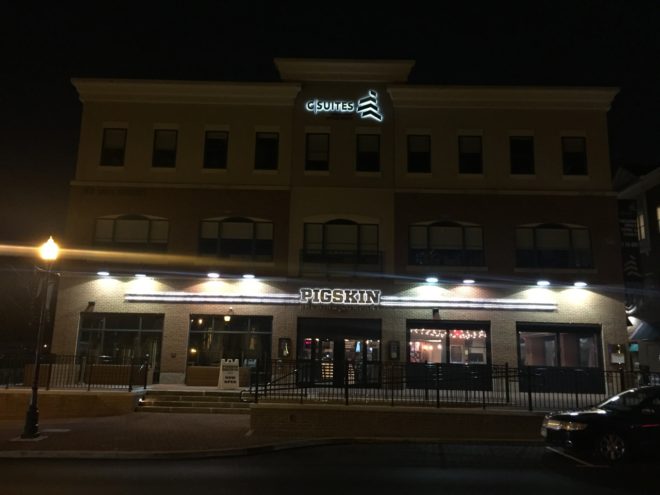 The next stop was out to Gahanna to visit Pigskin Brewing Co. I’ve had their beers before, but have never visited their brewpub. It’s right in the middle of Gahanna’s Creekside development. The long space features plenty of windows, a closed-in patio and the brewery in full view. 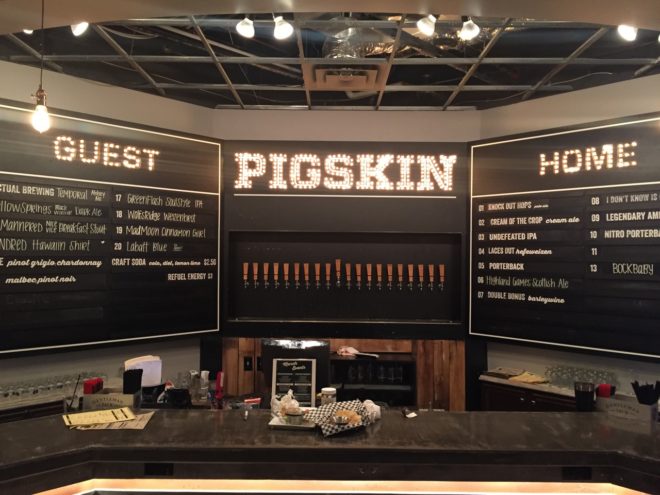 As the name implies, there’s a definite sportsball theme. House beers are listed on the home side, while a solid selection of visitor beers are featured under guests. Pigskin’s house brews all have athletically themed names like Undefeated IPA, Laces Out hefeweizen, and Porterback. 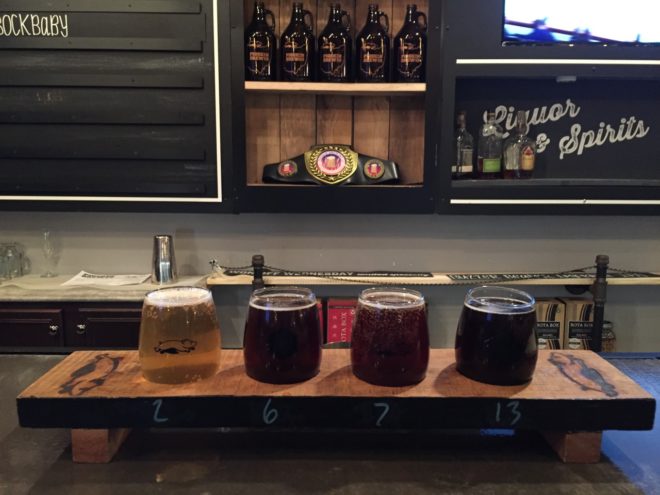 We each ordered flights of four beers; I tasted the cream ale, Scottish ale, barleywine, and bock. Props especially to the bock and the barleywine. 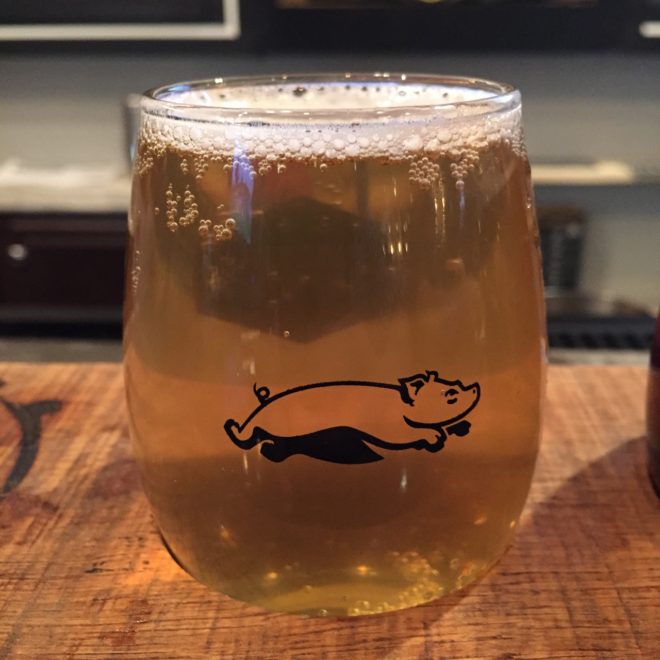 We loved their tasting glasses, too. I don’t know anyone else that uses this style. 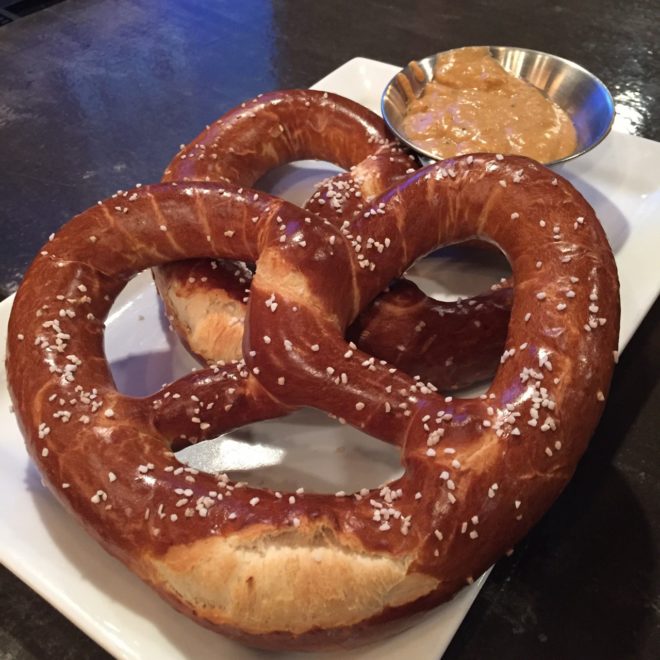 Pigskin added a small brewpub menu a while back, featuring flatbreads, salads, and lots of pub snacks. We enjoyed a couple hot pretzels with a beer cheese dip. 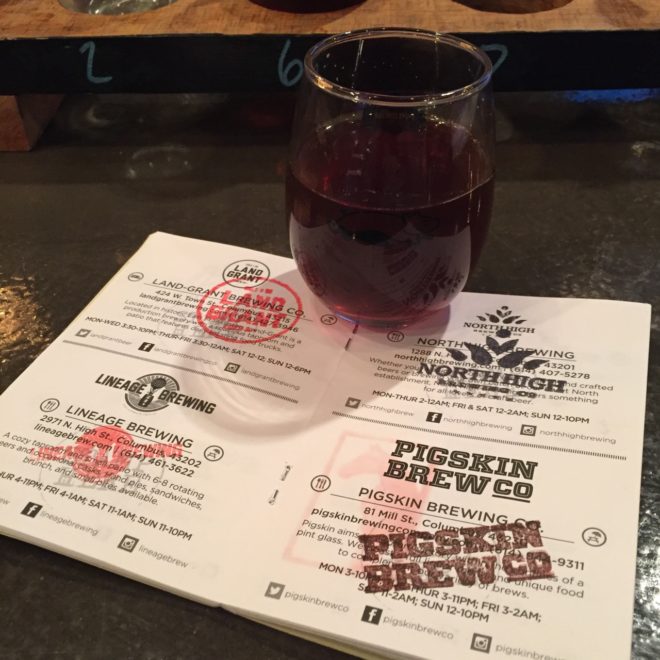 I have to a give a nod to the service, too. Our server was incredibly friendly, fun to interact with, and helpful with beer selections. 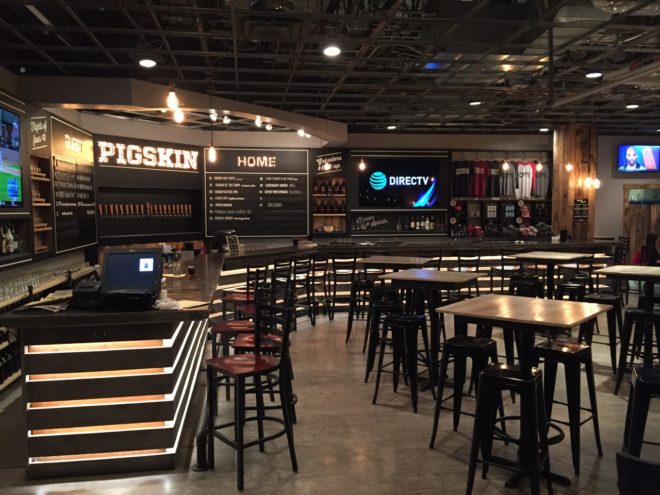 I love the look of their taproom, too. Clean and spacious and open. 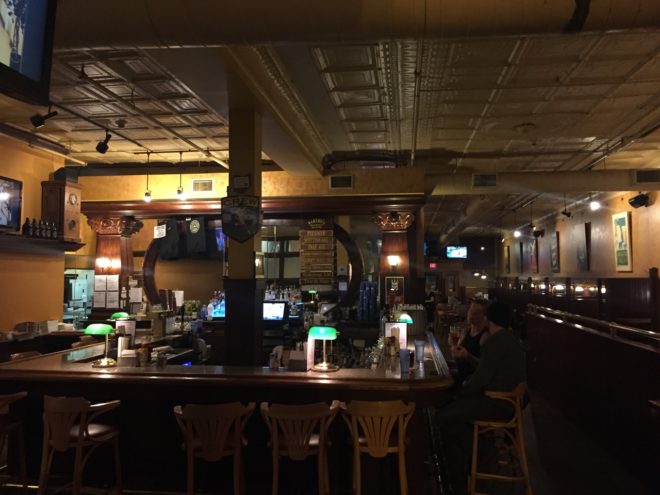 Last stop in this round of Ale Trailing brought us back to a classic: Barley’s Brewing Co. It’s the first brewery we got to know in Columbus, and one of the very first places we ever ate when we moved to the city in 2002. Barley’s is part of the old guard of breweries along with Smokehouse and Elevator. It opened 20+ years ago, back when you had to have a full service restaurant in order to serve your beer to customers. That’s why all the oldest breweries in town are brewpubs. 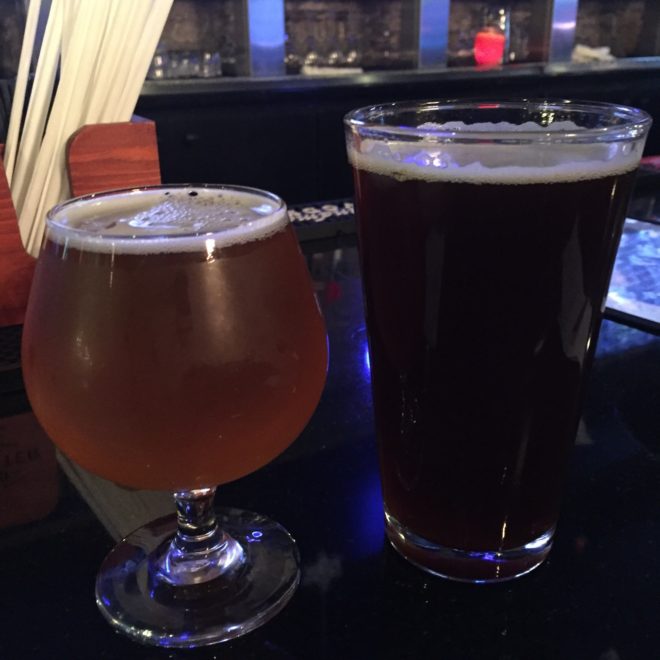 It was late in the evening so we weren’t up for dinner, so we bounced between the bar and Brewcadia, the upstairs arcade. We ordered Barley’s Auld Curiosity old ale and Tour de Hops Experimental IPA. 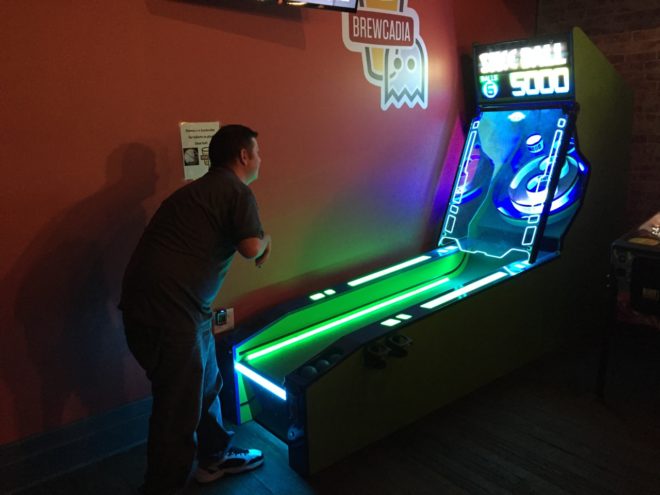 Brewcadia features a good selection of arcade games and one of my favorites: skeeball. I could play that for hours. Brings back memories of birthday parties at Chuck E. Cheese. 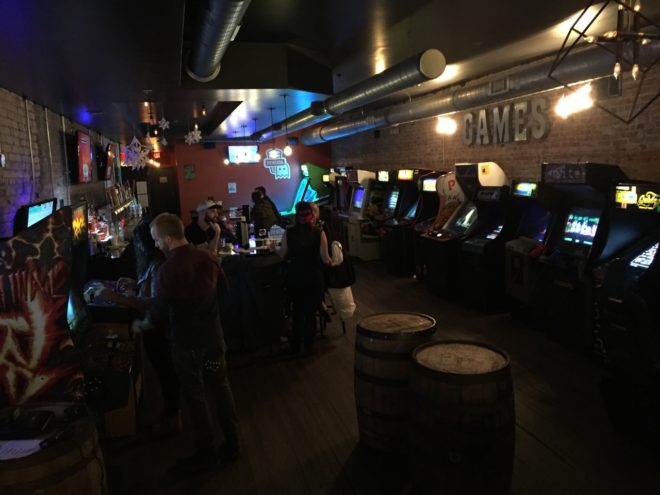 They did a nice job with the upstairs space, and I think it’s an awesome addition to the brewpub downstairs (which is a great spot for lunch or dinner, if you’ve never been). The brewpub bar features a selection of house beers on tap, plus a hand-pulled beer tower and a Friday firkin special. Brewcadia upstairs features another 20+ beers, including a lot of guest drafts. 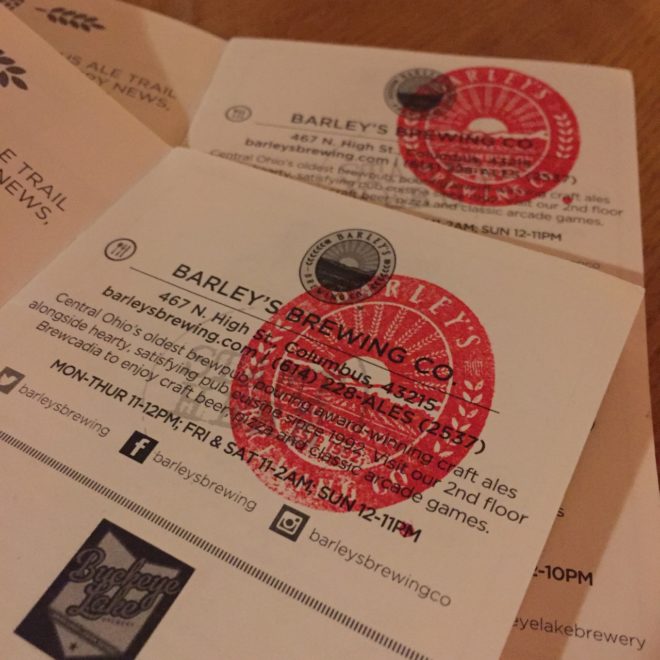 Twenty down, eight to go.

You should try the Ale Trail yourself! Learn more about it at cbusaletrail.com. Pick up a brew book at any central Ohio brewery or at Experience Columbus, and start collecting stamps! You’ve got until April 30, 2017 to visit all 28 stops in volume two. The Columbus Ale Trail volume three drops in May with the next Columbus Craft Beer Week.